You are the owner of this article.
Edit Article Add New Article
You have permission to edit this article.
Edit
Home
About Us
Be a Member
Advertise
News
COVID-19
Senior Spotlights
Solutions
Explore Sections
Sports
Podcasts
Newsletters
School Closings
Regional News
Events
Jobs
Obits
Homecoming
Weather News
Share This
1 of 9 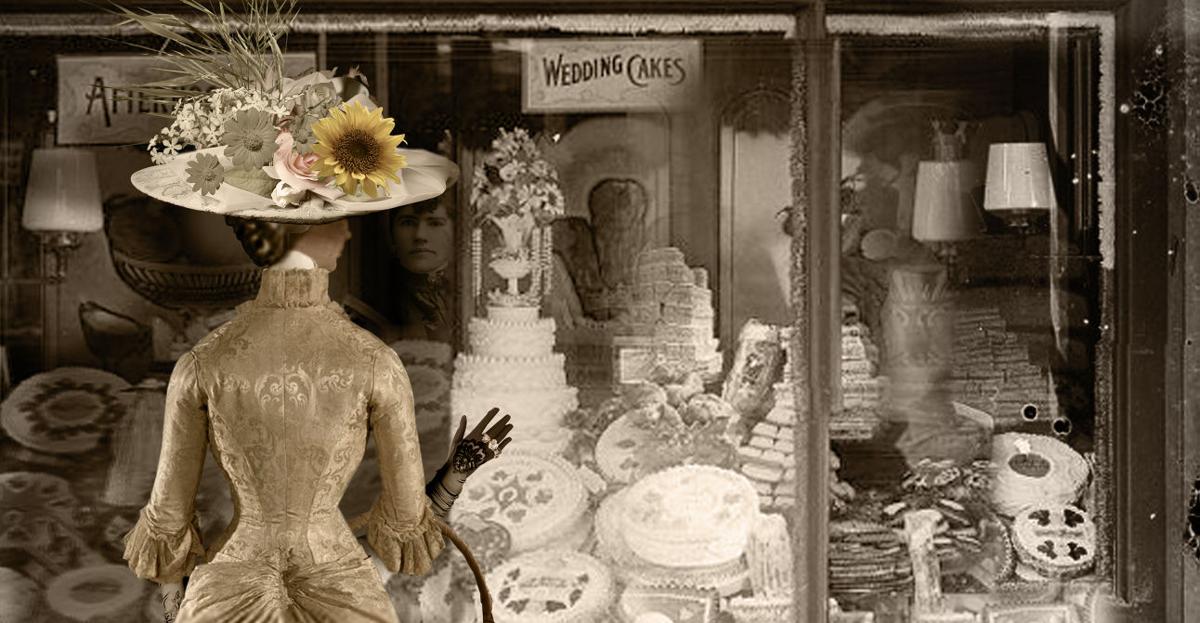 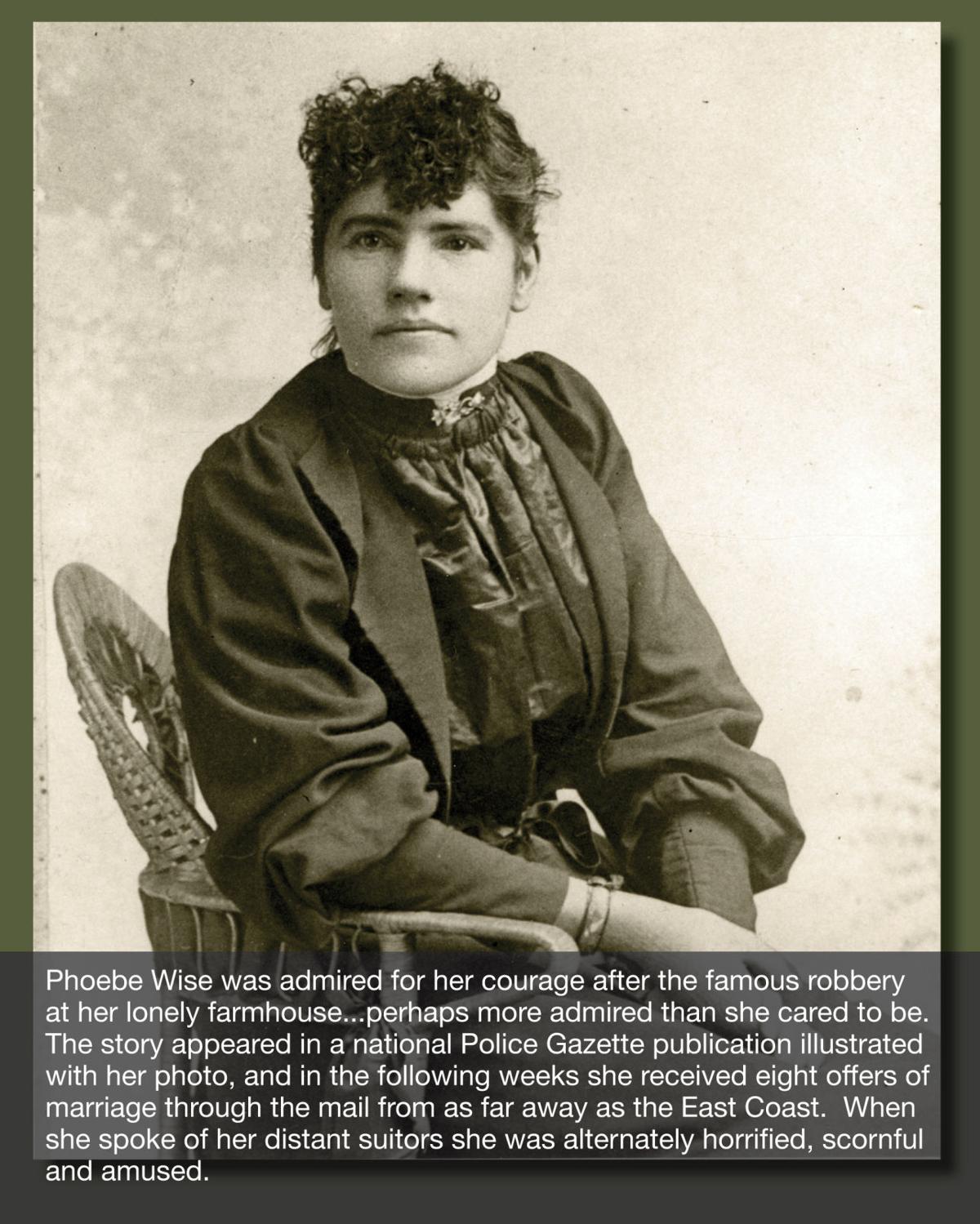 This portrait taken in a Mansfield studio when Phoebe Wise was young. 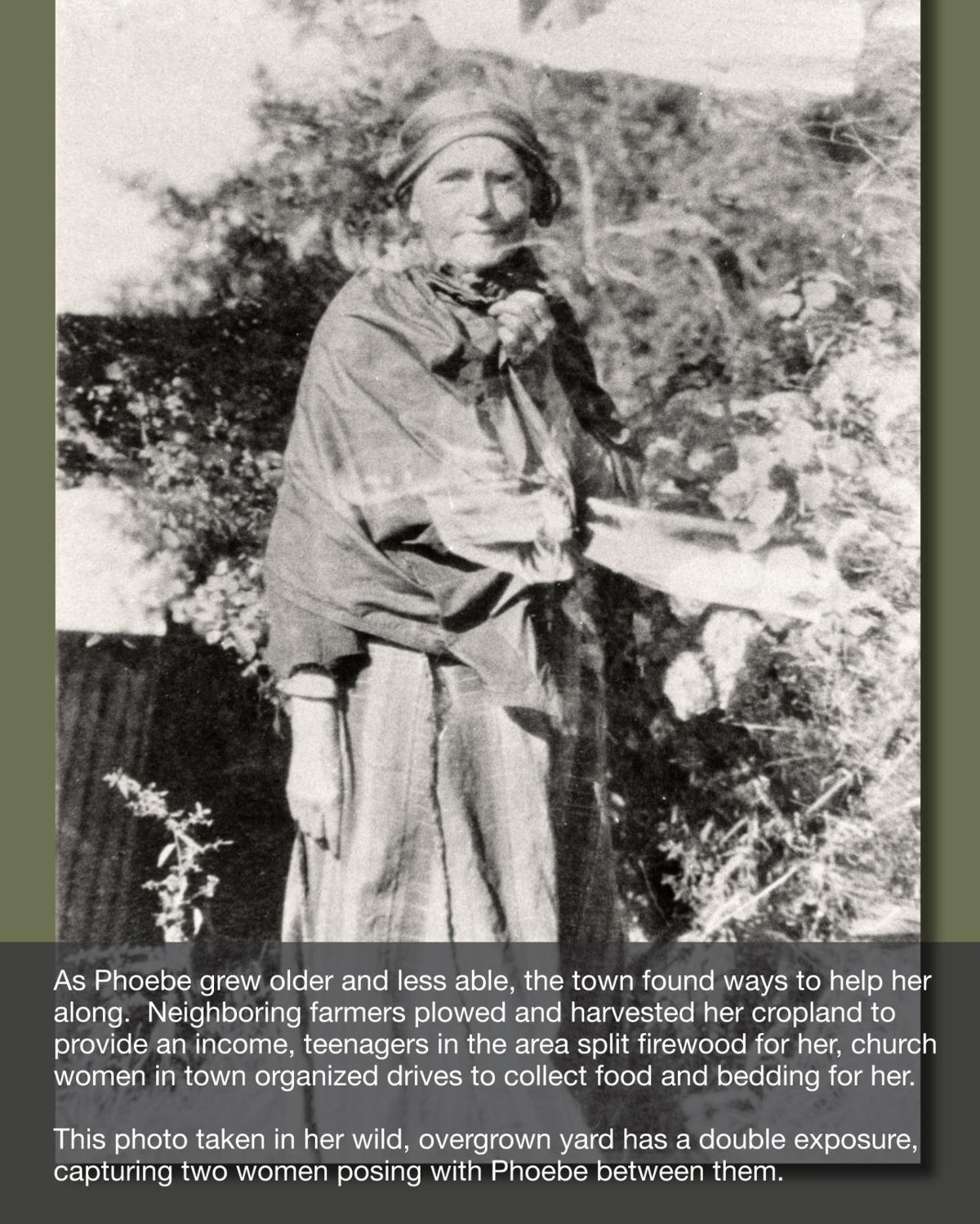 This double-exposure snapshot was made in Phoebe's wild yard. 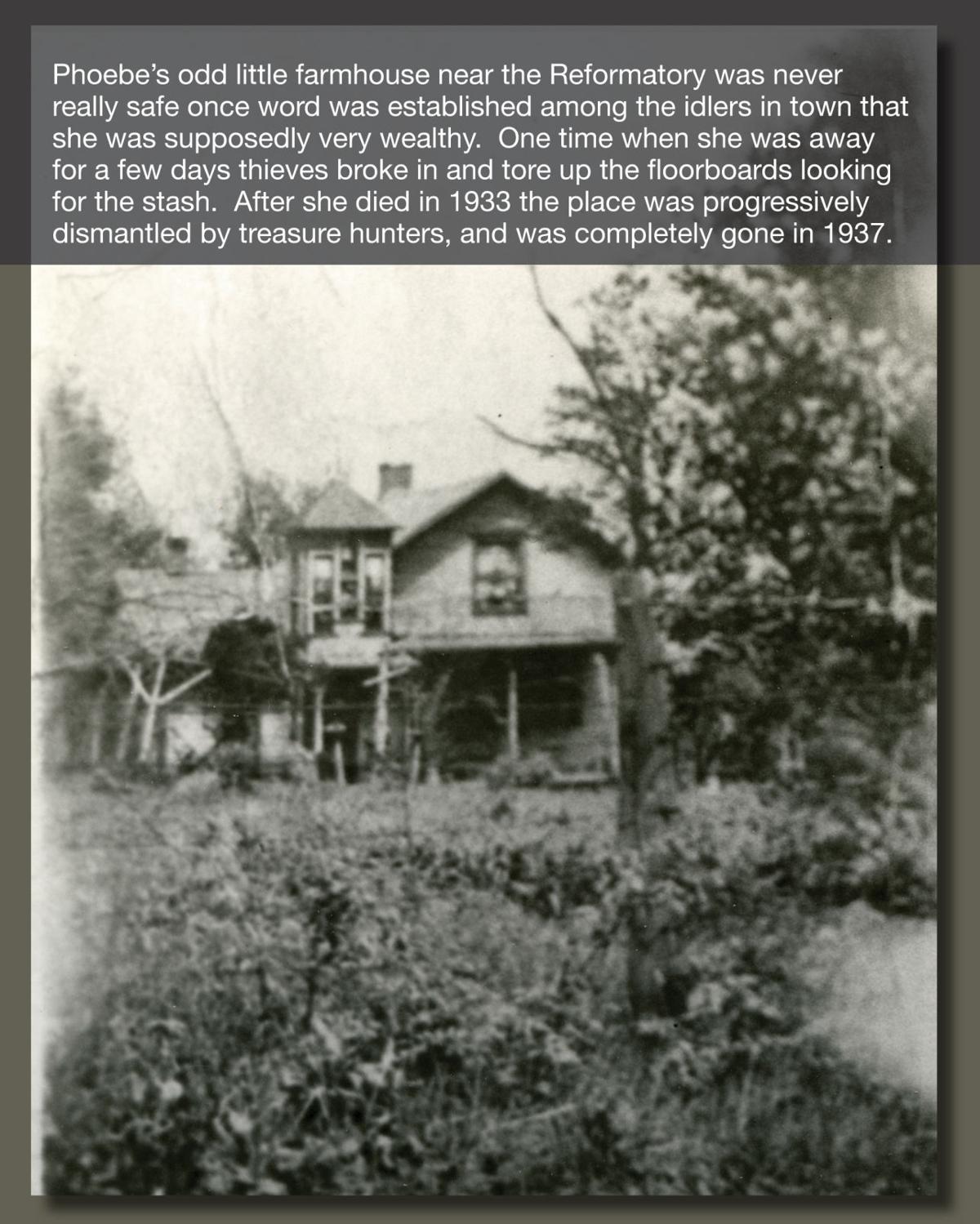 The Wise farmhouse was located on the Olivesburg Road (Route 545) north of Mansfield. 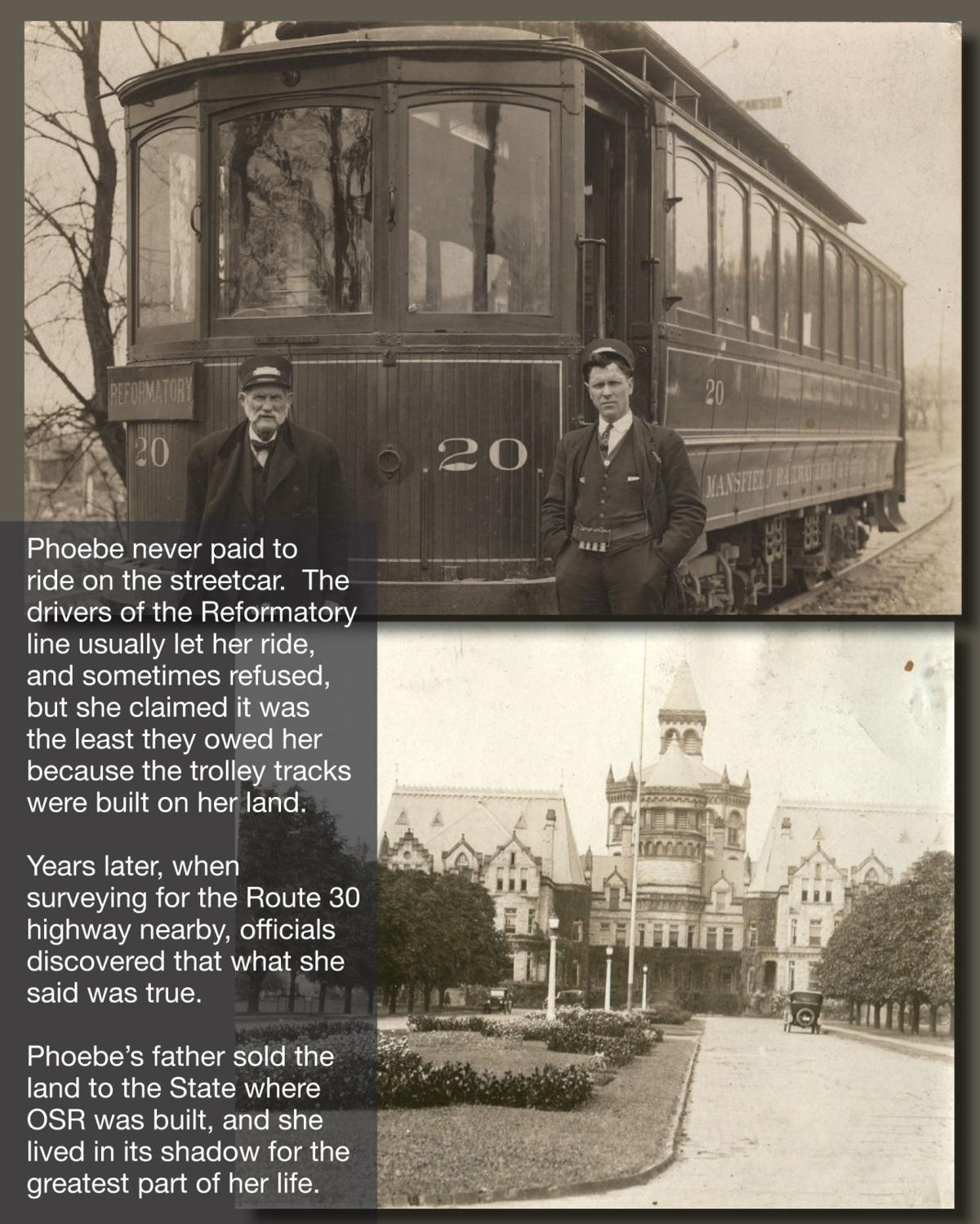 Phoebe lived in the shadow of OSR most of her life. 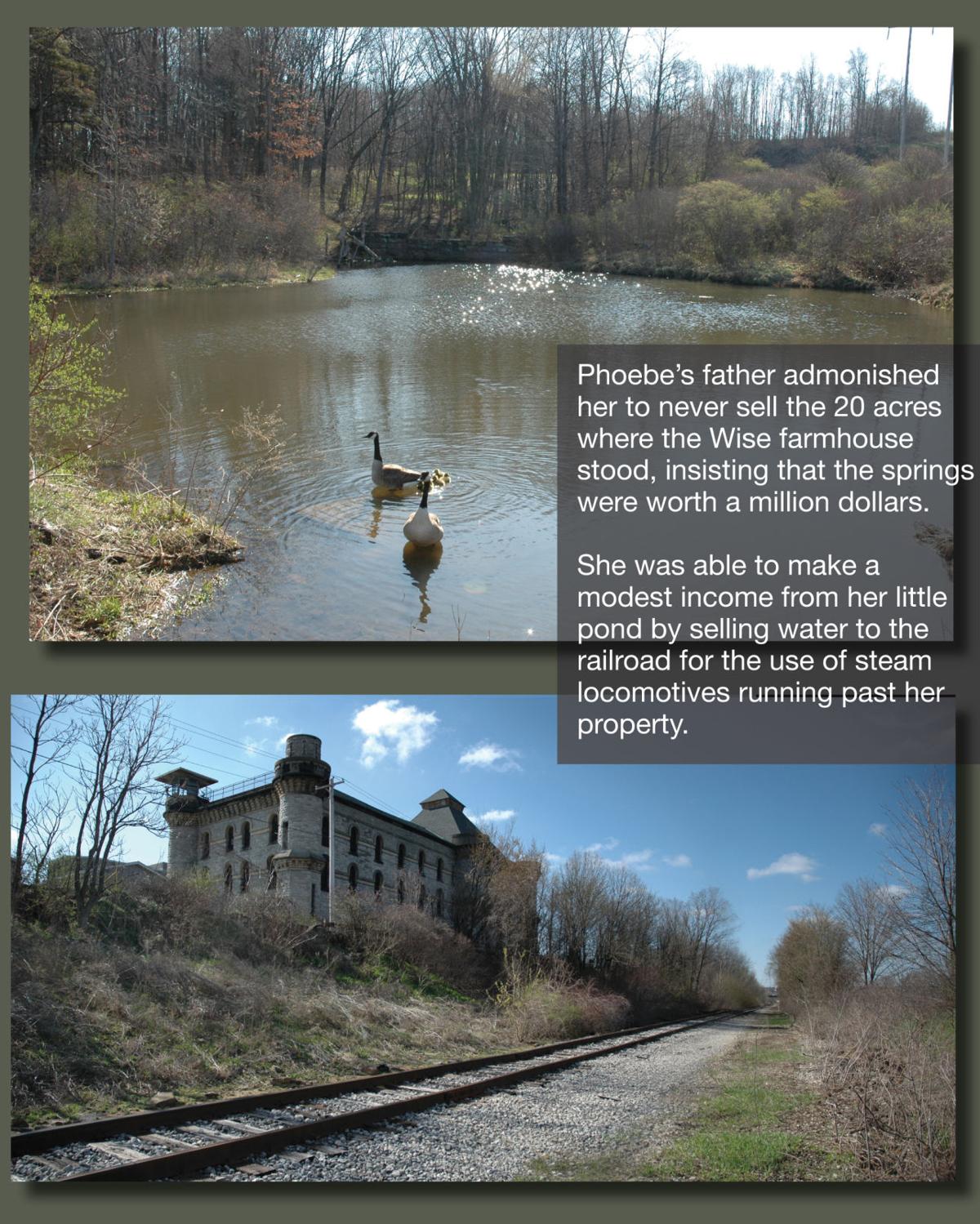 The pond on the Wise property earned Phoebe a small income. 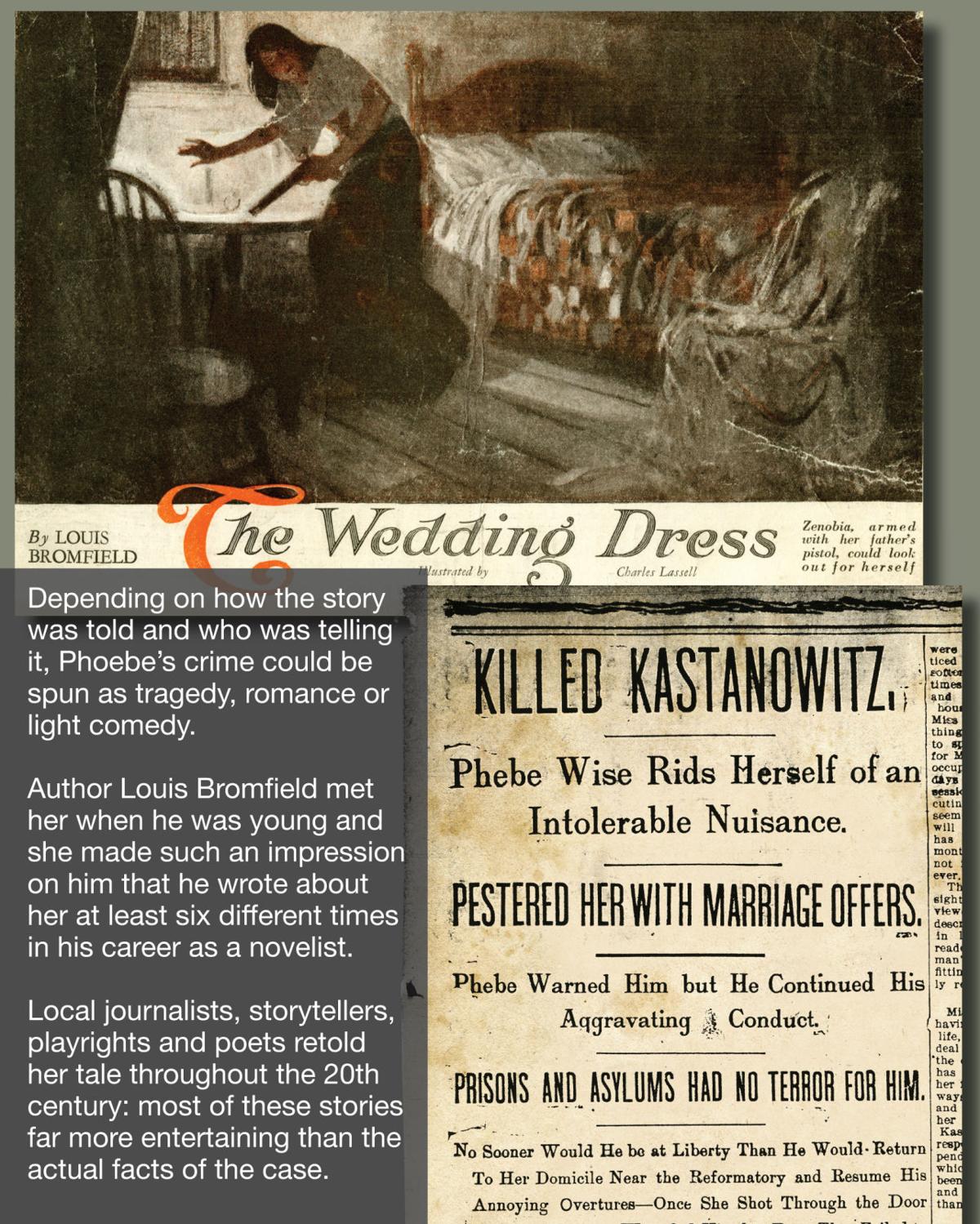 Phoebe's legend grew when her tale was told by various local authors. 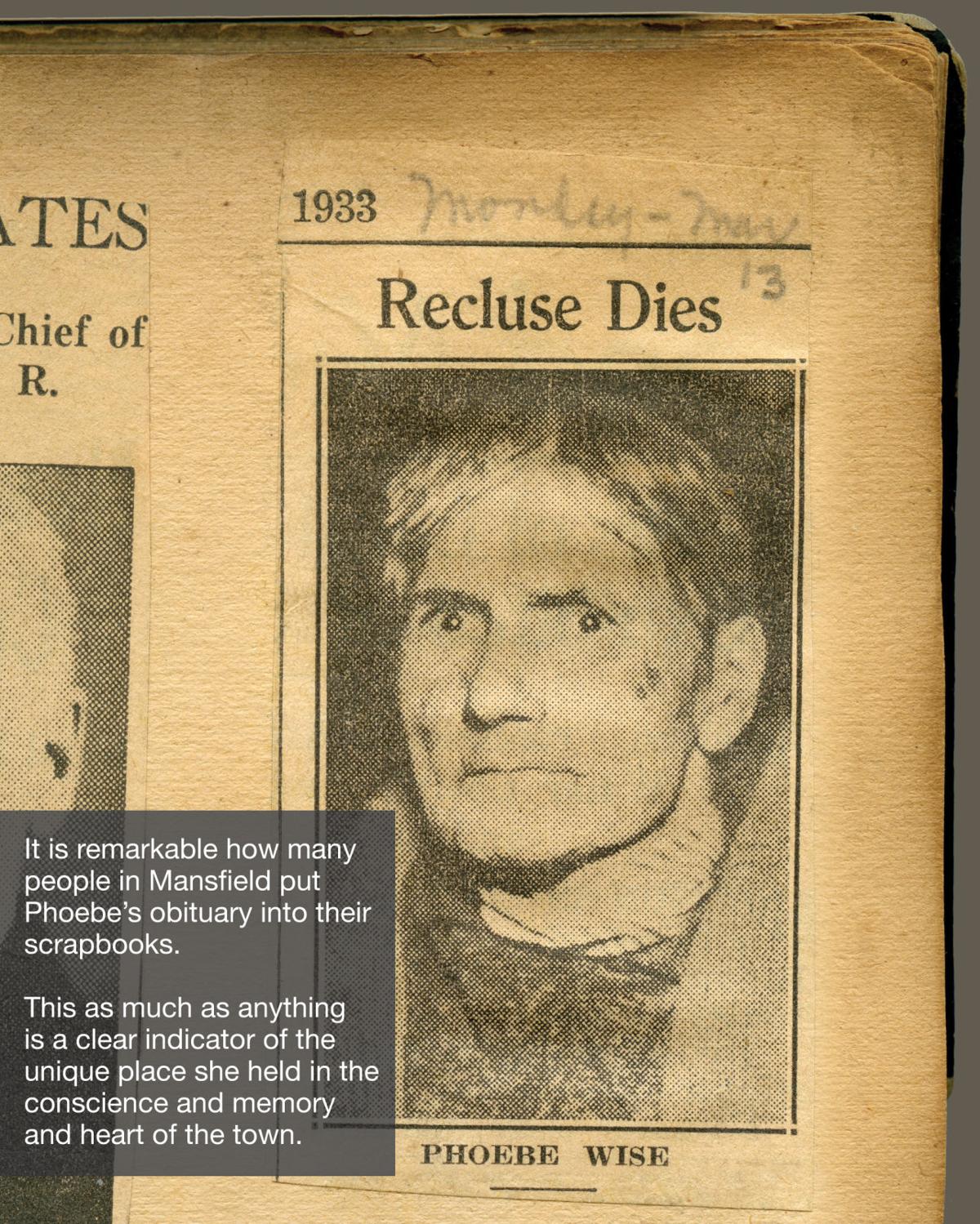 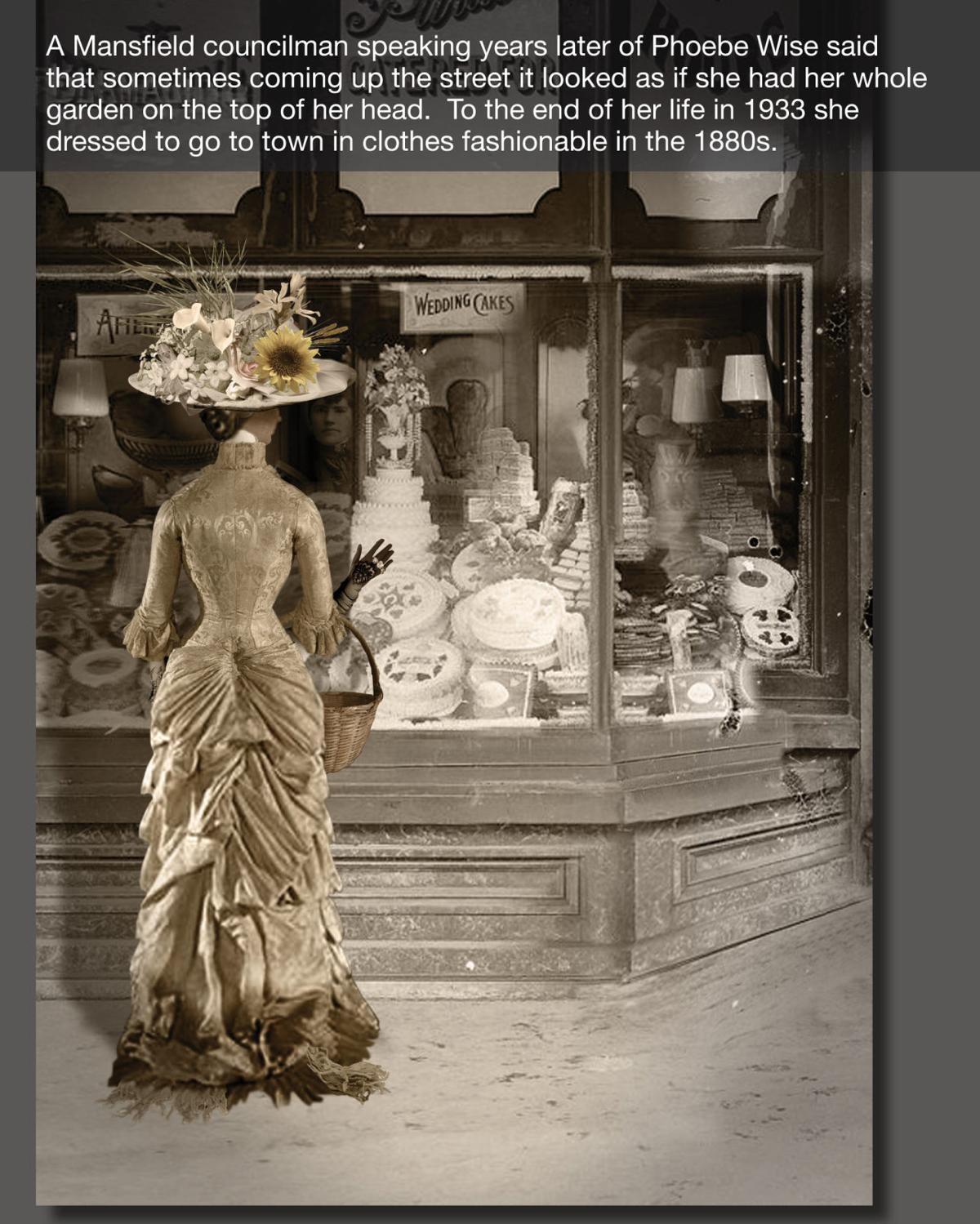 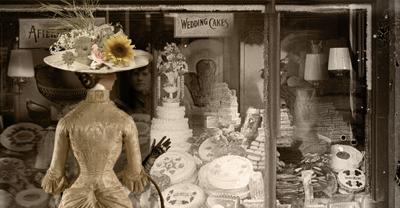 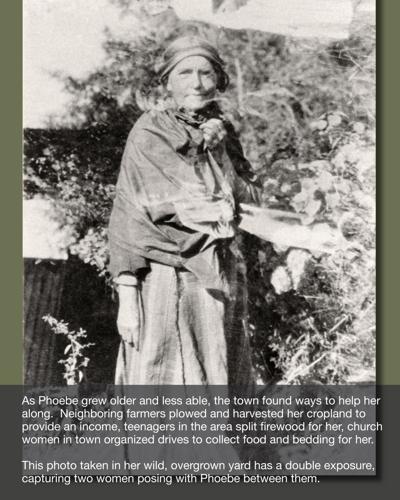 This double-exposure snapshot was made in Phoebe's wild yard.

The Wise farmhouse was located on the Olivesburg Road (Route 545) north of Mansfield.

Phoebe lived in the shadow of OSR most of her life.

The pond on the Wise property earned Phoebe a small income.

It has been three or four generations since Phoebe Wise has been gone. There are very few people alive today who ever actually laid eyes on her.

Yet she still has a place in the family of this town. Perhaps today her place is less in memory and history and rather more in the nature of lore and legend.

She lived during an era when Mansfield was more like a family — an oddly dysfunctional family to be sure — but still small enough to recognize everybody, and be connected, proud and caring, with a sense of belonging.

In our city’s family she was known as the eccentric aunt — the one who never married, whose legacy was wild and solitary, who was weird enough that she made everybody else — no matter how peculiar, or wounded or awkward — seem very normal next to her.

We all loved her, we all worried about her, we all celebrated her very unique soul that always shone outside the confines of customary, conventional life.

She was very different, and in that age it made her valuable.

In the 1930s and 40s, her life’s tale was woven into fanciful stories in the writings of our homegrown famous author. So, for a generation there were hundreds of thousands of readers all over the world who were familiar with Phoebe’s legend. Her character walked through novels and popular magazines, and even appeared on early television as a figure of tragedy or romance or light, sentimental comedy.

It magnified her mystique in local memory, and served to soften the sometimes-harsh edges of her tale by blurring the facts.

She did kill a man, that much is fact — it is in the court records. But how it came about has been subject of considerable plot modification.

It makes better script if the slain man was somebody she loved and lost, but in actuality he was kind of unhinged and had been pestering her, stalking, and attacking her for so long there wasn’t anyone in town who was surprised when she shot him.

The trial afterward — what there was of it — was a merely procession of character witnesses who all came to speak on Phoebe’s behalf.

In the 1890s it was still a community with one foot planted in farm life, and they all understood that when the rabid animal is put down no one is to blame.

She was robbed, that was well documented in the papers too. Some wayward kids — they were only in their early 20s — got it in their minds that Phoebe was rich, so they tied her up and burned the soles of her feet to make her tell where the money was stashed.

It was the kind of horrific crime against a woman who lived alone that awakened nightmares in the public conscience. The story was picked up by newspapers all over the country and read with great sympathy by folks who never knew her, who didn’t even know where Mansfield was.

Locally it made the Mansfield family even more protective of her, more defensive of her character. Because, believe me, there was plenty about her that made strangers look twice … three times.

Phoebe Wise came to town once or twice a week on the streetcar. Walking up and down the streets, shopping, chatting with friends, there was not much chance you would fail to notice her. For decades, long after it was fashionable, she dressed up to go to town in an old Victorian era gown with ruffles and trounces, a bit of a bustle bumped out on her backside, and a train dragged in the dust.

Most people thought of it as a sort of wedding gown because it was formal and antique. But years of weather and dust on the streets had discolored and frayed the bottom of the costume so that it seemed to grow out of the earth like gnarly roots of a tree.

Her hands had long lacy gloves with a knot of sparkling glass jewels on her knuckles. On top of her head was a wide-brimmed low hat that she always decorated with fresh flowers cut from her garden, and streamers of silk ribbons.

People said if they hadn’t known it was Phoebe, they would have thought it was a madwoman making her way up Main Street. But once anyone spoke with her they never again thought twice about her costume. She had an aura and a charm. Phoebe was very knowledgeable about almost anything worth talking about.

Cleaning out her house years later there were many books in which she had kept notes on the end pages, notes of everything from characters in Dickens to the correct names and positions of Cleveland’s major league baseball team.

She had been a teacher once, at the age of 14 in a one-room school not far from her home. She also played the piano from an early age — both classical music and sentimental ballads.

Phoebe stood on the sidewalks and spoke at length with leaders of the community who were fond of her, but also with housewives and laborers, ragged idlers and panhandlers, kitchen maids and lost children. She engaged with anyone who looked in her eyes, and anyone who had that conversation, or even a word of encouragement from her, came to love and respect her.

Her eyes were dark and deep and everyone said she could see you for who you really were.

The robbery left a terrible scar on her, however, and afterward her walk was a little broken with a limp. Her costumes became even more bizarre, and she was seen sometimes wearing two dresses, one on top of the other.

Children were somewhat alarmed by her because as her life went on she bathed less, and mumbled as she walked. Sometimes she was heard to have conversations at the diner with someone across the table who no one else could see.

To the adults in town, none of that mattered. They all knew her story, they all held her as family, and quietly respected her dignity.

The word they used for Phoebe was ‘tetched,’ as in ‘touched by God.’ She had a laser-clear connection with all creatures — from people in Mansfield to squirrels in her orchard. She talked with the animals on her place just the same as if they were people.

She had a guard dog for years, and then after the invasions of her home she also kept a horse in her home who kept strangers at a distance with its hooves and teeth until she said they were welcome.

Her land was near the Reformatory — in fact her father had sold the land where OSR was built.

It was the Reformatory street car she rode into town, and the tracks at the edge of her property brought her another modern convenience as well: electricity.

Phoebe’s lonely farmhouse was always lit up at night because she early on figured out how to run a wire from the electric streetcar tracks. Periodically, officials from the electric company made their way to her place, and past the horse, so they could scold Phoebe and disconnect her wildcat power.

She was contrite until they were out of sight back on their way to town, and then she’d go hook it up again. It was a little game they played.

She had neighbors who offered to pay for her electricity, but neither she nor the electric company wanted the game to end so it continued until she died.

Phoebe Wise lived her entire life in the same odd little farmhouse north of town from 1848 to 1933. After she was gone the house didn’t last long from the depredations of scavengers and souvenir hunters, tramps and vandals.

After the home was gone there was still another generation when the site was bright with her gardens gone wild and the orchard gone to seed. For years a lush stand of exuberant lilacs kept the spot like a shadow of life so vital and fertile it takes generations to pass from the memory of the land itself.

Note: Read more of the Phoebe Wise story in the images at right above.

check out Bandits, Stalkers & Murder: Life of the Tetched Phoebe Wise by Brett Mitchell.  Buy it from Ohio State Reformatory and support their ongoing restoration: www.mrps.org