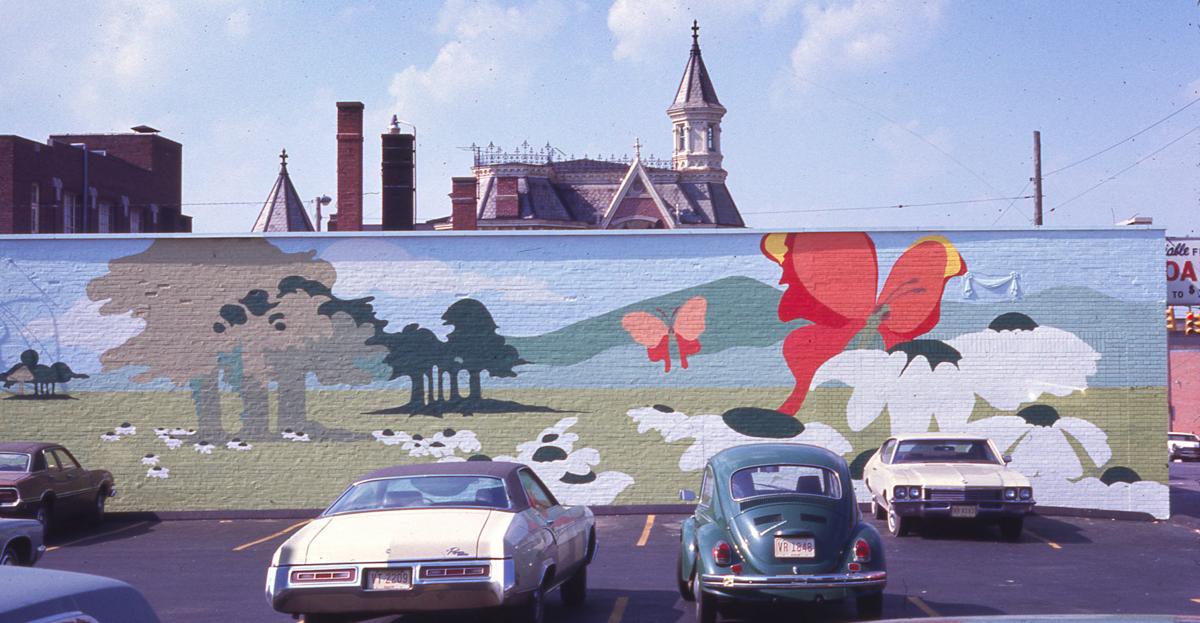 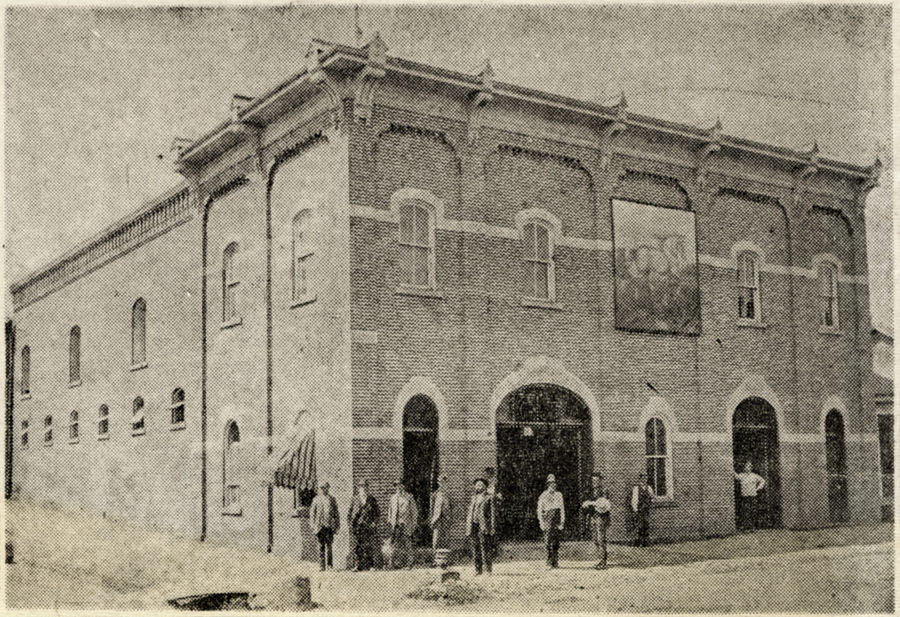 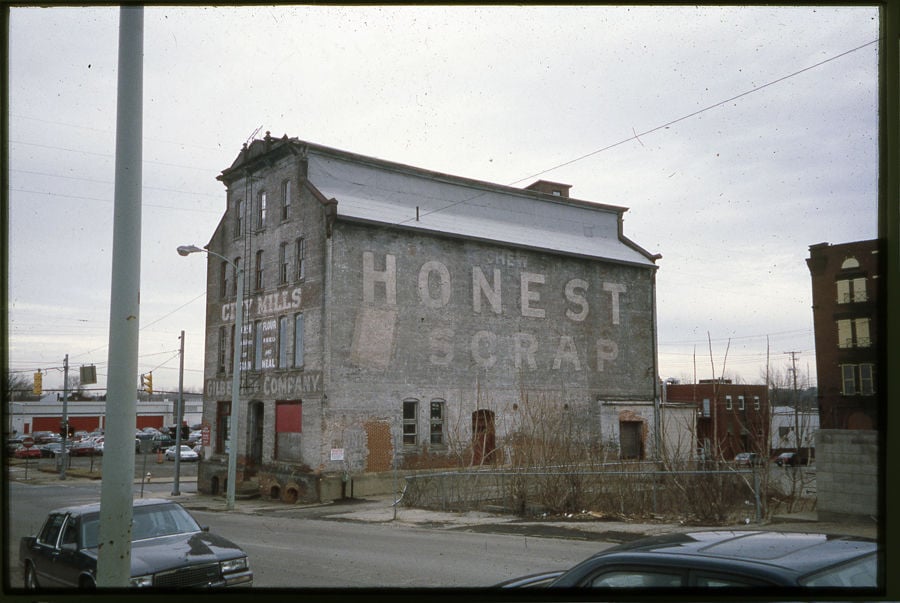 A landmark wall painting of the 20th century on City Mills, at the corner of Fifth & Main, began as a common advertisement in the 1930s and ended up in the 1980s as a downtown joke: when the Honest Scrap chewing tobacco lettering faded to read Honest Crap. 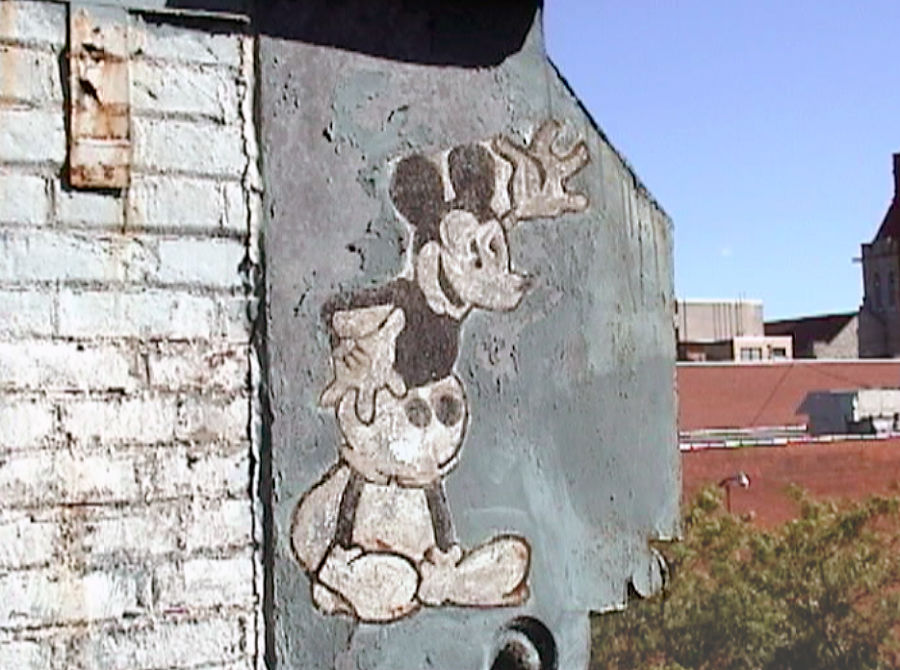 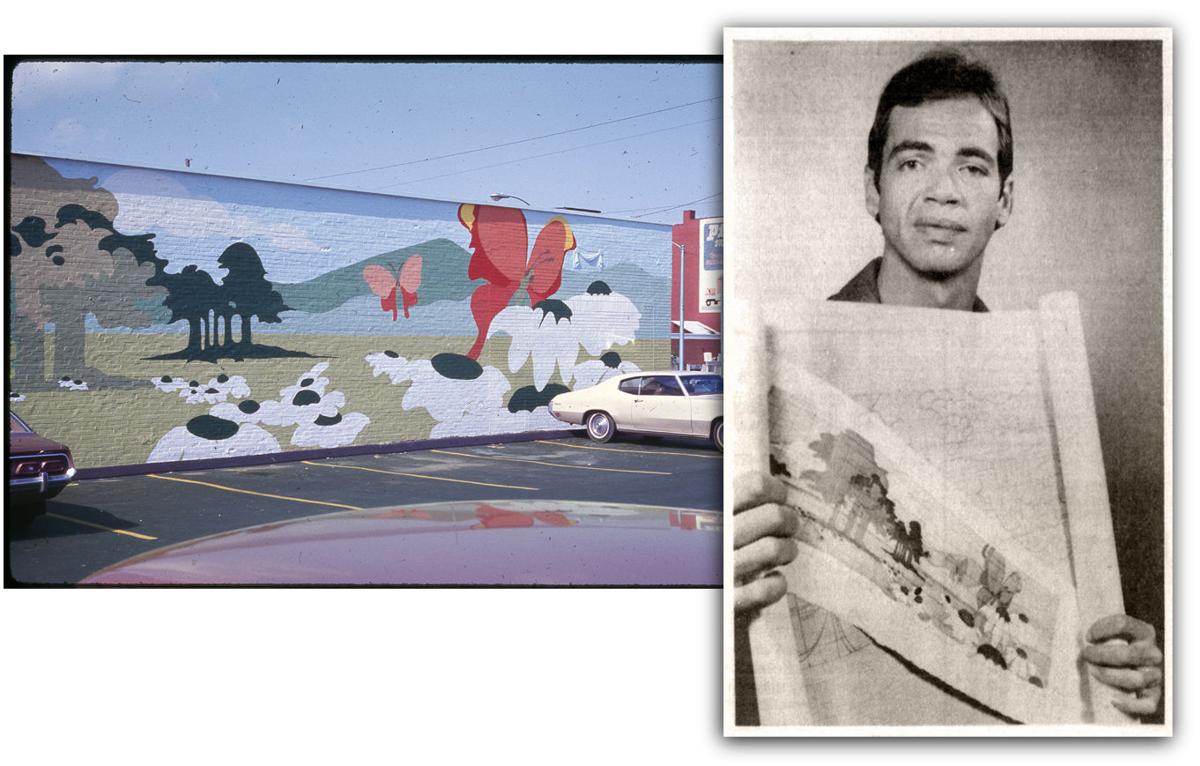 Designed by Ken Murray and executed within a month by a team of weekend painters, the Kafer Building mural was so popular it easily paved the way for funding the next several MURAL projects.

Ken Murray (1948-1988) grew up in Mansfield and taught art classes at Mansfield Senior High School in the 1970s and 80s. His distinctively simple style of painting made his work recognizable on canvas or enlarged to mural dimensions. 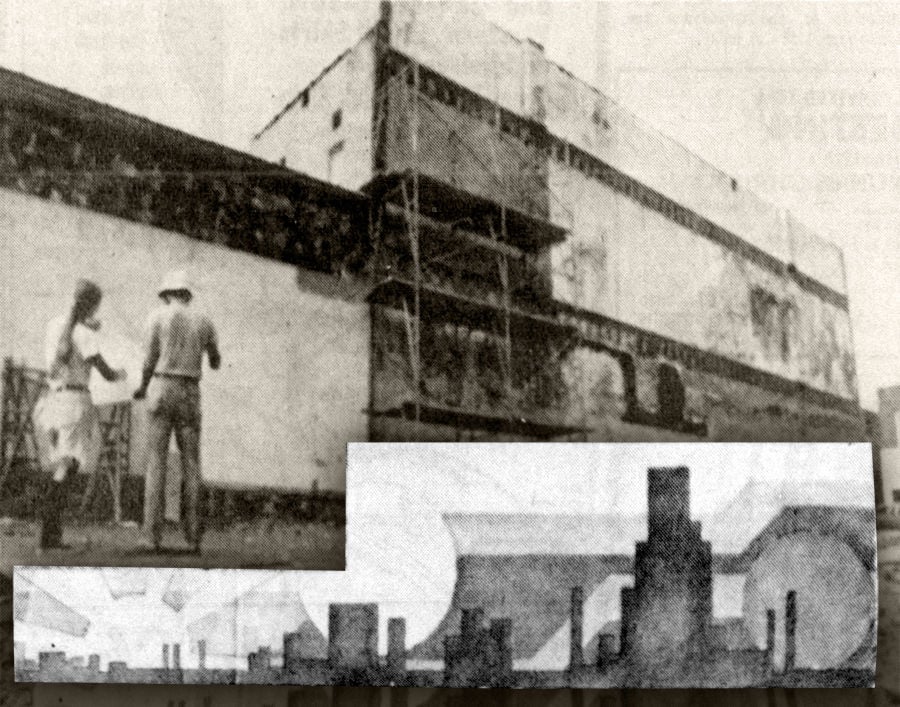 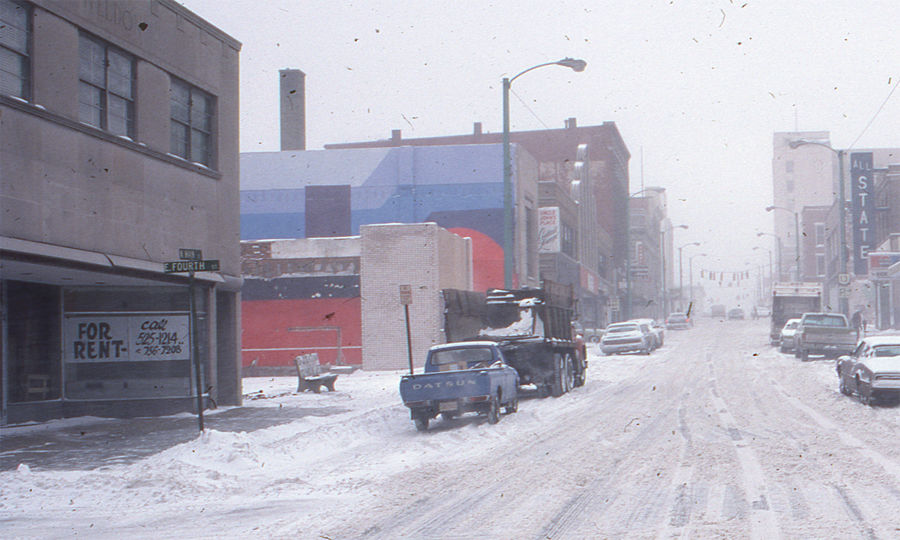 Though partially obscured by another building, the mural facing north on North Main Street nonetheless gives clear evidence of the impact of color in the downtown streetscape as seen from from Fourth Street. 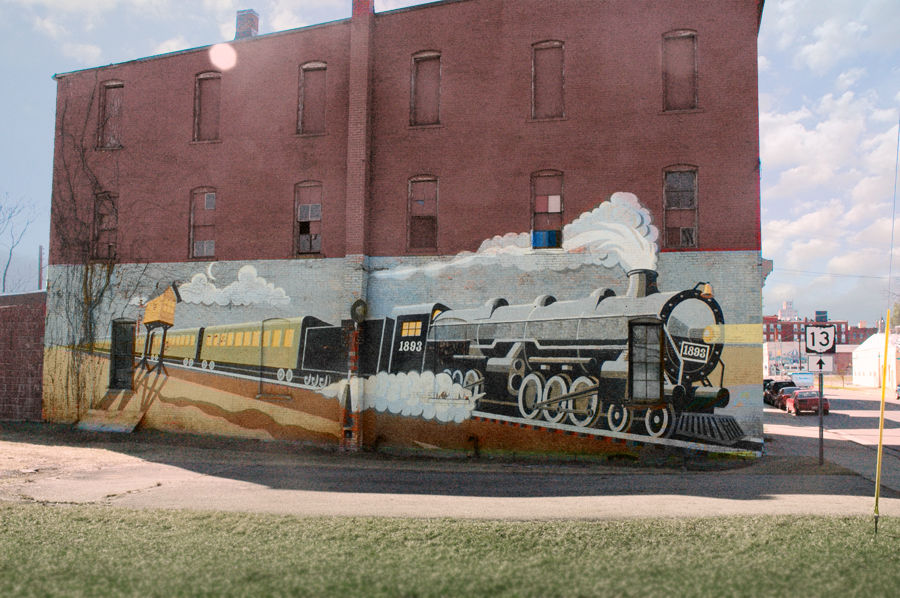 Of the six artworks accomplished by MURAL, the only one that survives today is the railroad scene on North Main Street at Olive Street: painted on the side of the Creamer’s building. 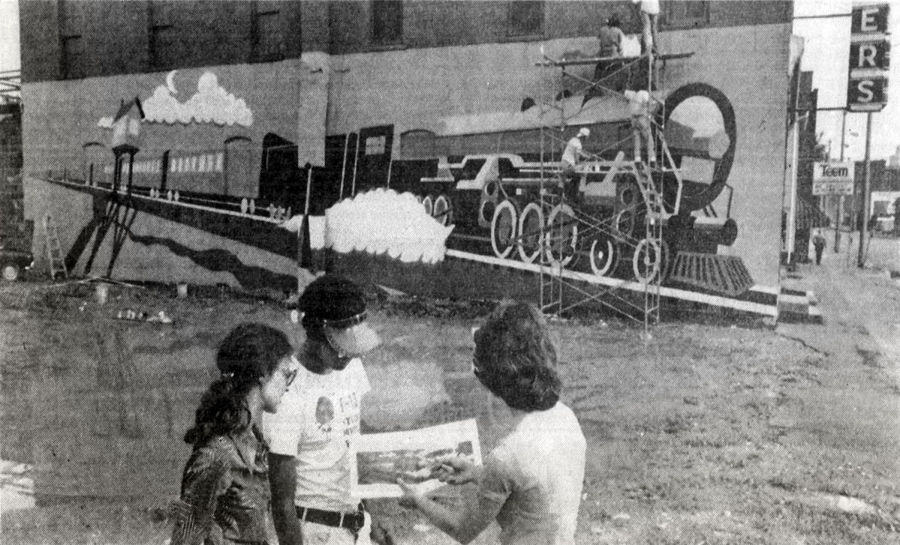 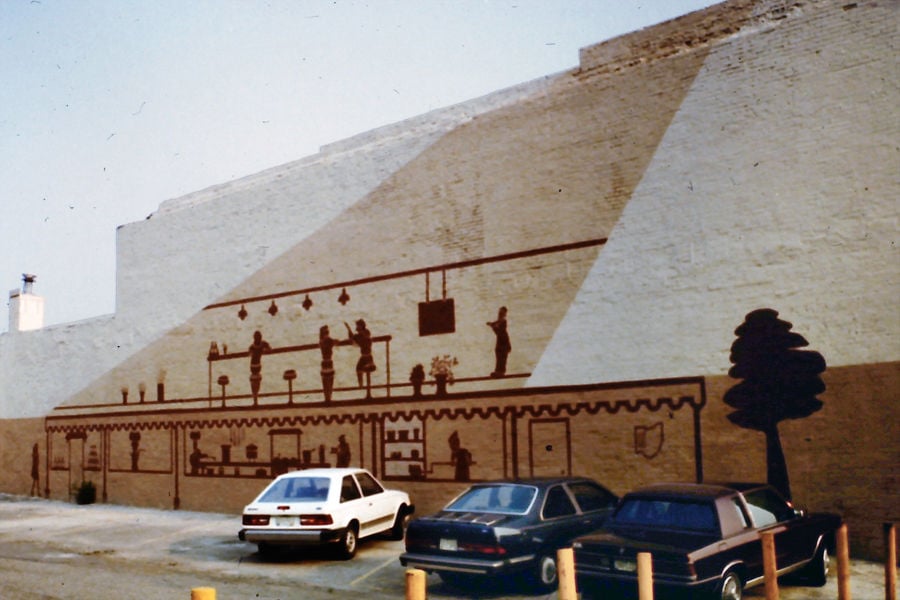 Today the Wiler Building is a gym facility next to the Carrousel on Main Street, but in 1988 it was a restaurant supply company called All State Equipment. Ellen Stiffler designed and painted this mural facing south on a wall that has since been resurfaced in block. 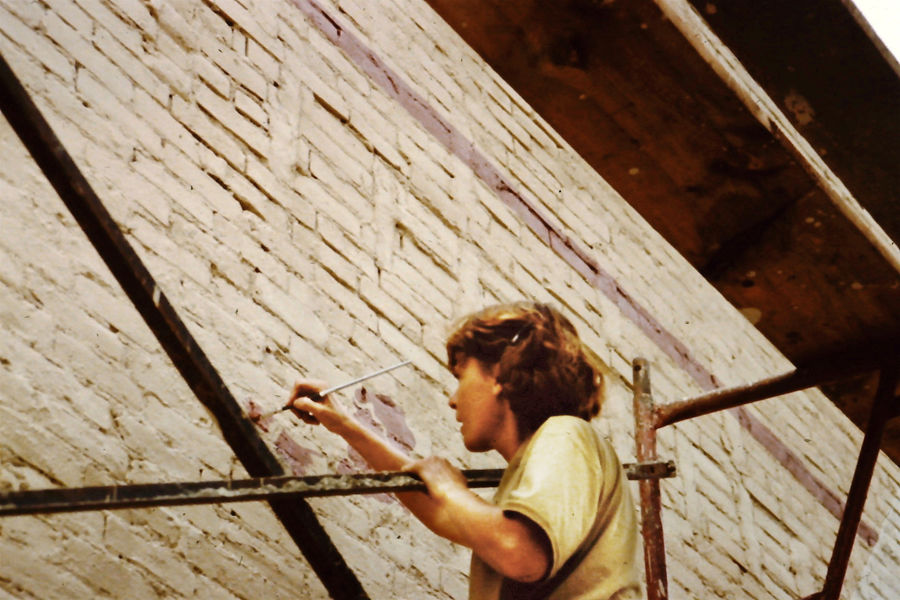 Ellen Polhemus Stiffler is a lifelong muralist whose career of color and design has taken her indoors and out for wall space. 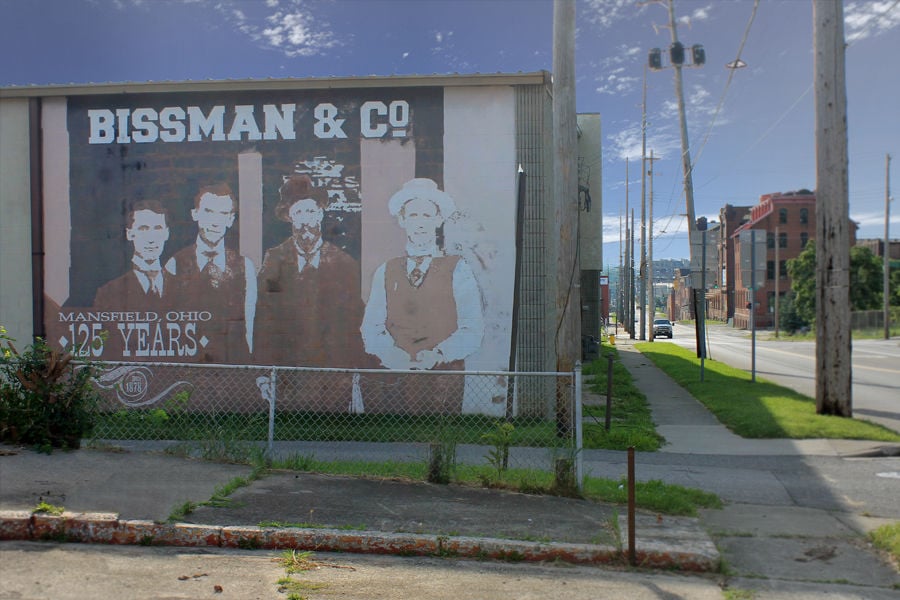 Around 1993 this tribute to the Bissman legacy in downtown Mansfield was painted by Randall Fleck on Sixth Street between Walnut and Mulberry. 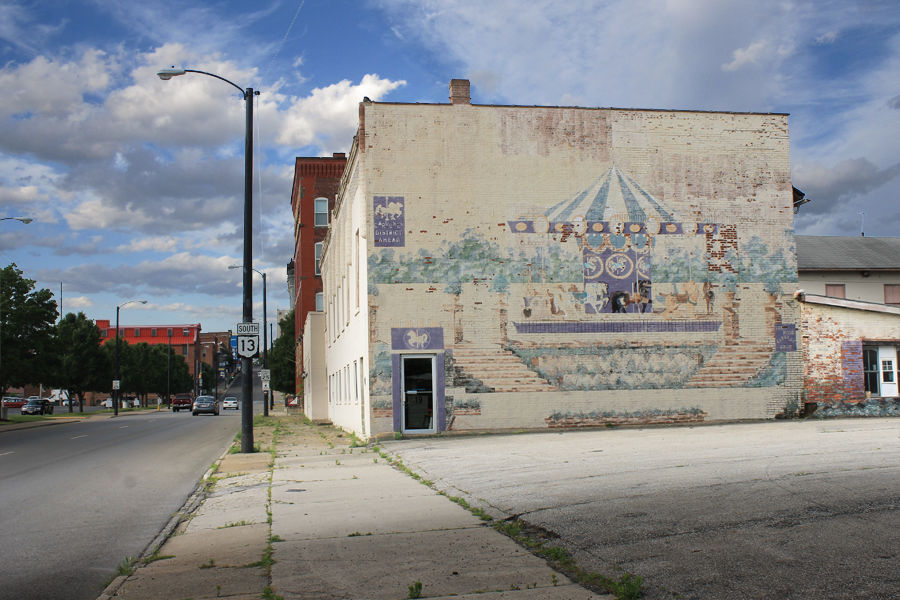 The northern portal to the Carrousel District on North Main Street is delineated by a mural painted on the Urban Flats building in 1998 by Sue Dodd, who is known for a gallery of over two dozen city murals in Zanesville. 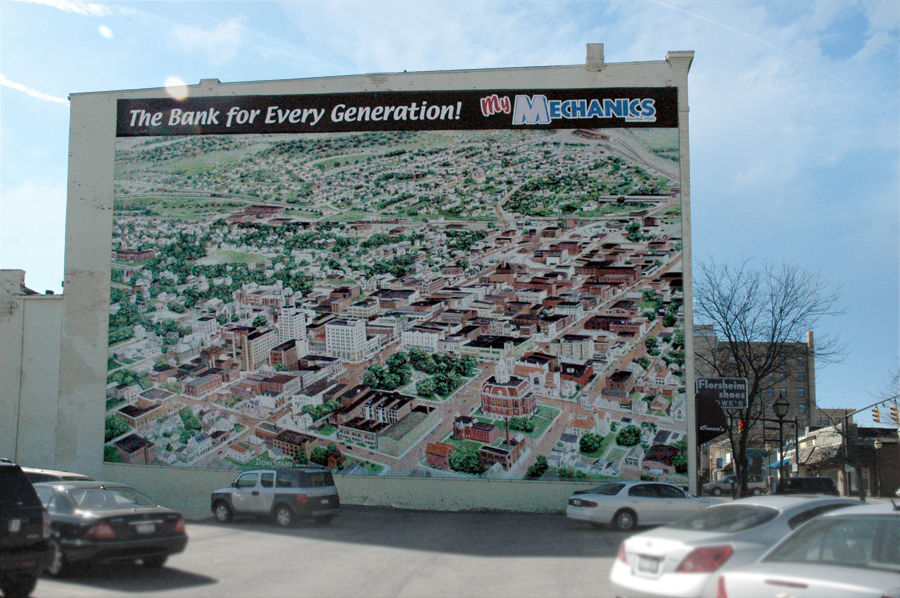 A new era of mural technology appeared in 2001 when the art of graphic design merged with applied billboard science to create a landmark of epic proportions. A vintage birds-eye view of the city was printed onto a 54’ x 76’ surface and mounted on North Main Street to face a whole block of Fourth Street. 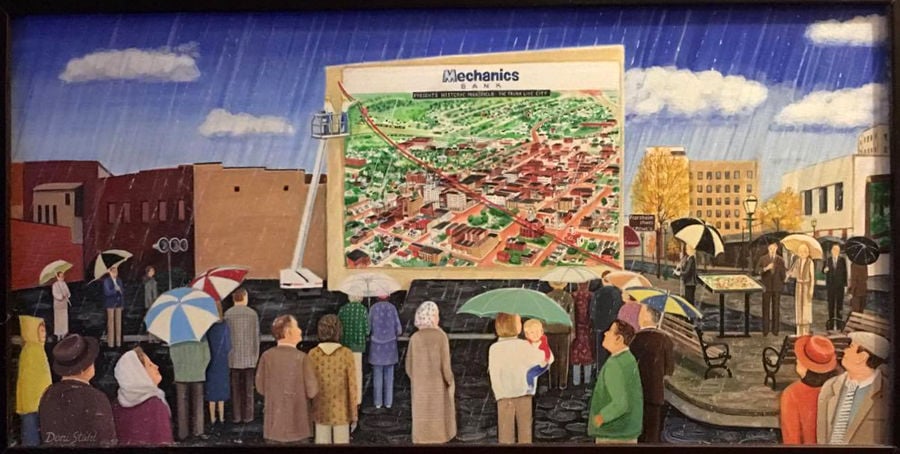 The giant aerial rendering of downtown in the 1940s was painted by Doni Stahl; who also created this view of the scene in October 2001 when the massive mural was dedicated in the rain by cutting a ribbon from a mechanical lift. 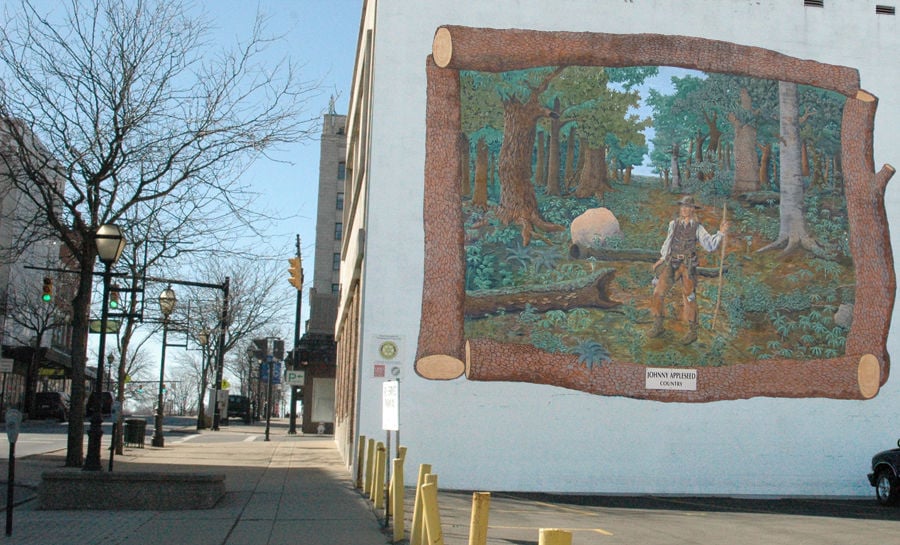 Art professor John Thrasher produced another landmark mural on North Main Street as a joint effort of Mansfield Rotary and OSU-M. With Joel & Wendy Morrow on the scaffolding the Appleseed rendering took 1,500 hours to paint in 2001. 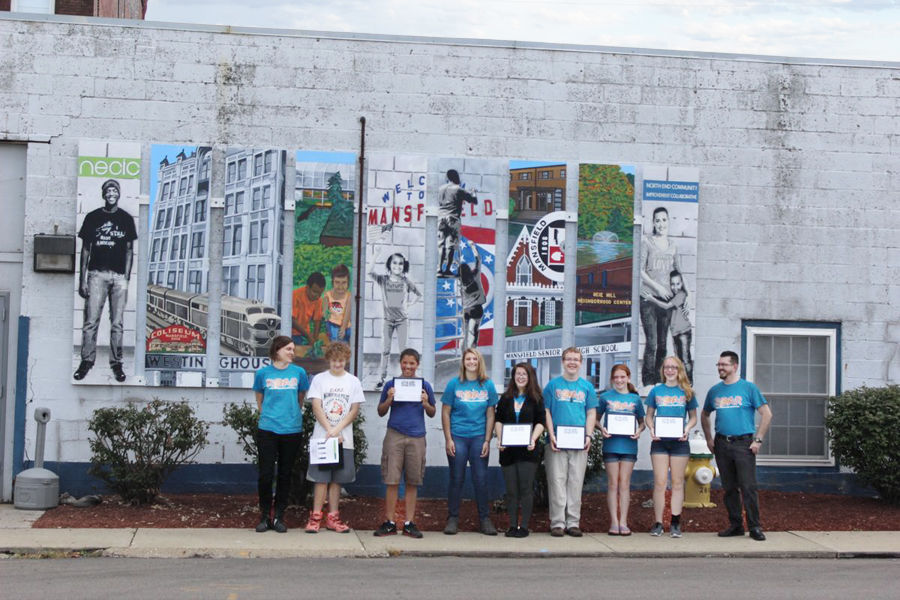 The first major downtown mural of the 21st century was created in 2016 when Wendy & Joel Morrow and ROAR art Academy students made this piece of public art on the North Walnut Street. The work mounted on the NECIC building is fully in keeping with the ancient tradition of art that is decorative, symbolic, and informative. 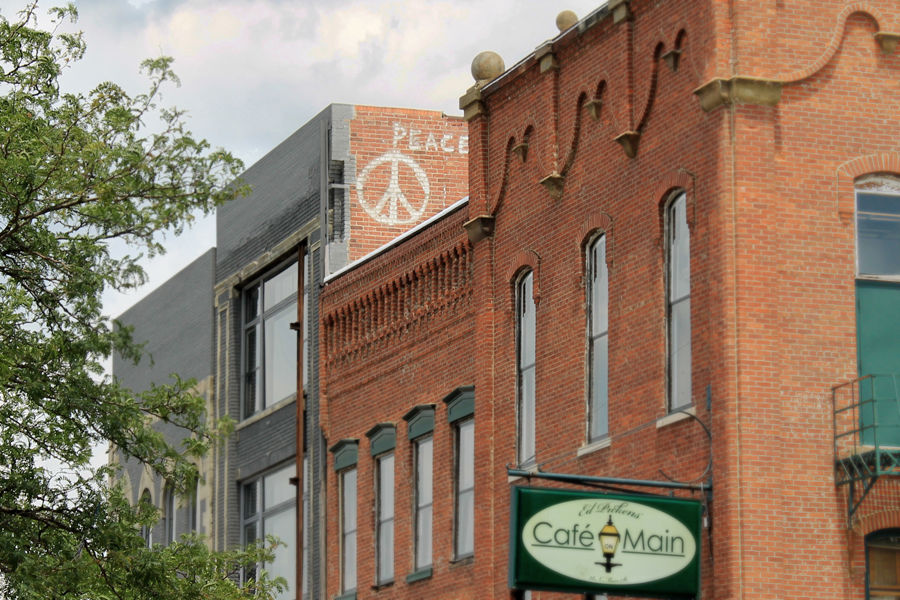 I have to say that of all the wall paintings downtown this humble little effort has always been my favorite. It never fails to make me chuckle.

And I know what it took to get up there when no one was looking.

Ever since the Upper Paleolithic epoch of history, communities of human beings all over the planet have been painting pictures on the walls.

Mansfield humans have been engaged in this movement of public pictorial expression for roughly 140 years. Our city has a heritage and a legacy of decorative, symbolic and informative art presented in its downtown forum.

In fact the whole of downtown has been something of a gallery for creative expression: both sanctioned and spontaneous.

As the 21st century ensues and downtown Mansfield is once again embracing its role as a venue for creative new public murals, it is time to take a look at a virtual gallery of older paintings on the walls of the city.

One feature attraction of downtown Mansfield in 1880 was the stunning mural commissioned by Abram Heineman to be displayed on the front of his Fourth Street stable and livery. As a successful dealer in horses, both locally and in the major cities of the east, his 10’ x 10’ painting of a Norman stallion Draft Horse served not only as advertising, but also as a celebration and icon of his equine genius.

Mansfield’s most famous and least obvious downtown pictographic icon was painted in 1939 on the Biddle Building by George Biddle. For more background on this landmark:

In 1976 a small cadre of artists and downtown property owners assembled in coalition to found an organization called MURAL, which stood for Mansfield Urban Restorative Art League.

Dismayed at the ugly, scarred walls being revealed as buildings were removed from the streetscape, the consortium of creative thinkers resolved to undertake a program of metamorphosis: transforming unsightly brick faces into art.

Their first project was the Kafer Building at the corner of Third and Mulberry Streets.

A huge wall was revealed on North Main Street when its neighboring address was reduced to a parking lot, and MURAL undertook to turn the eyesore into a painting. The abstract city skyline image with time-lapse sun symbols was designed by architect Tim Alexander and painted in 1976.