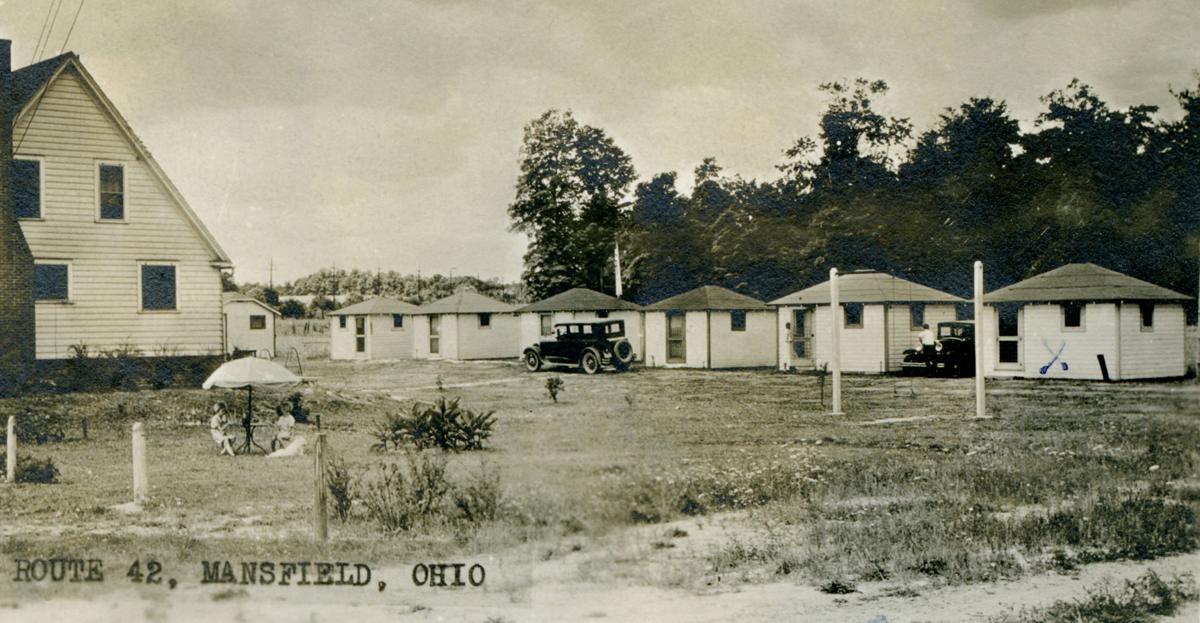 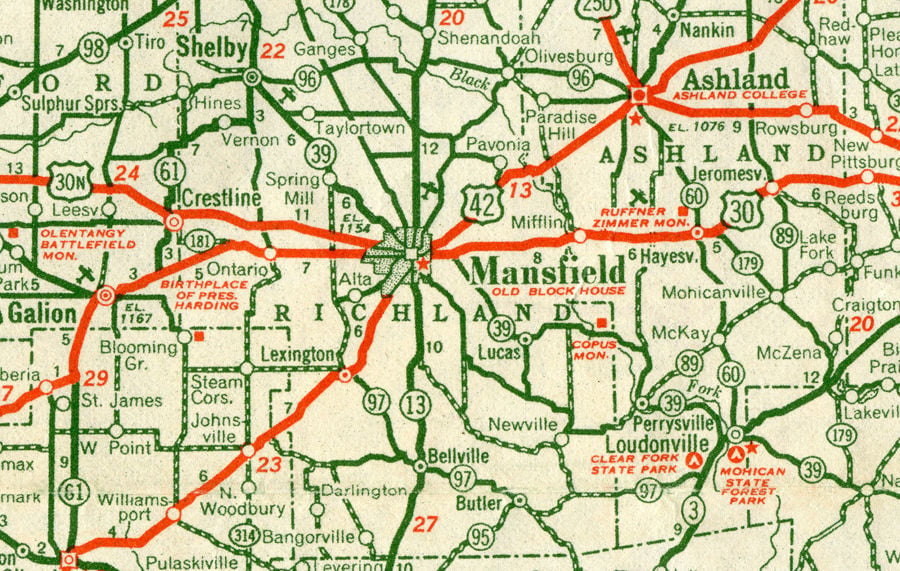 This Ohio road map from 1937 highlights the main cross-country highway routes, and designated tourist attractions for vacationers.  The Lincoln Highway, which 25 years earlier had been the first coast-to-coast auto route, is here designated as US 30. 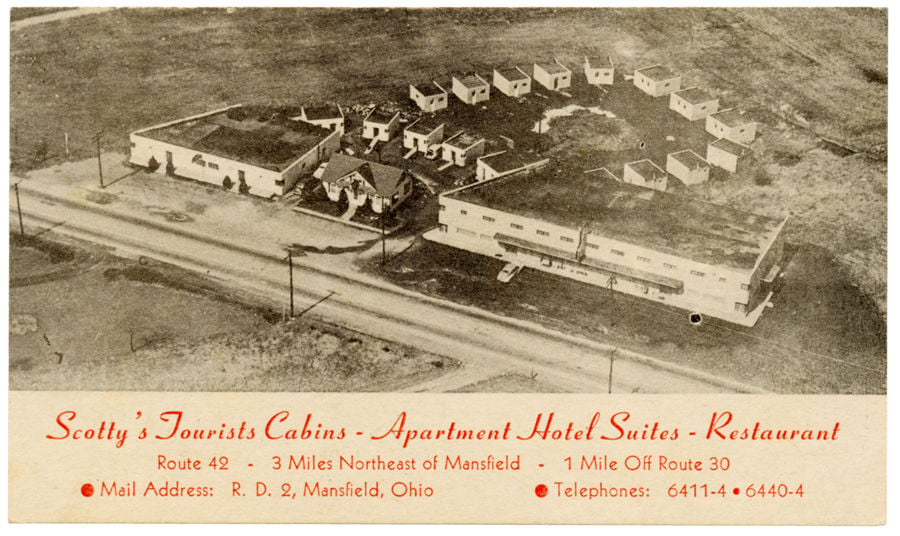 Scotty’s Tourist Cabins were typical roadside accommodations of the 30’s.

This complex north of Mansfield was torn down in the 1960s and replaced on the same site with Scotty’s Motel (Free TV), and after many subsequent alterations it exists today as the Budget Inn (Free Wi-Fi.) 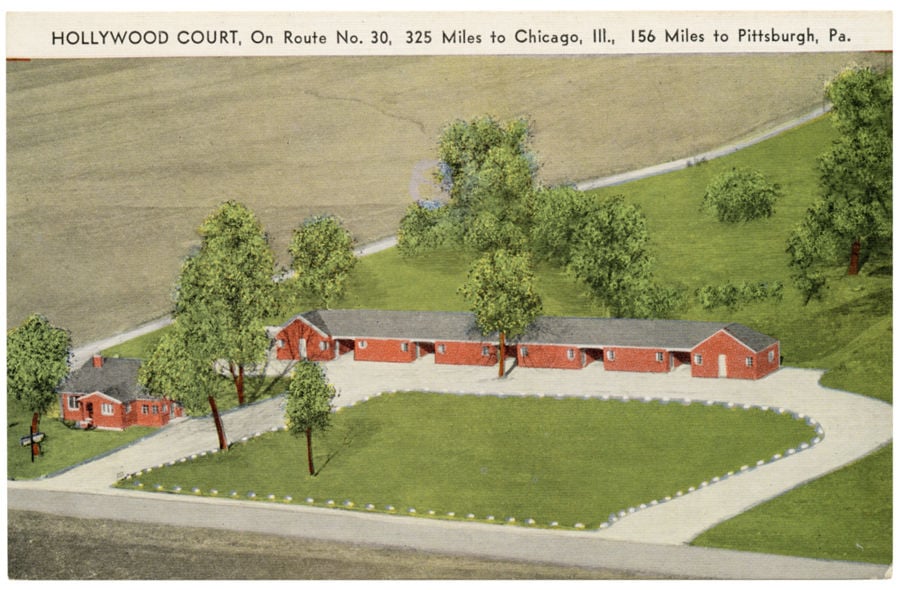 The Hollywood Court was located on what is now St Rt 430 east of Mansfield at Reed Rd.

As you can see from the postcard, early motels were simply rows of tourist cabins hooked together with a common roof that served as a carport. 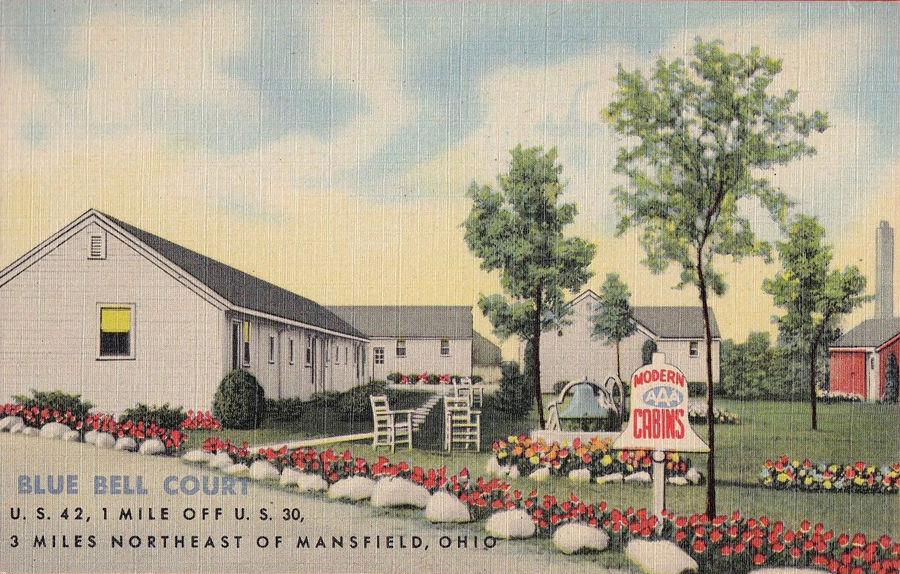 Tourists on Rt 42 in 1937 reading their AAA tourist guide book could have known about the Blue Bell Court modern cabins north of Mansfield.  The American Automobile Assn was begun back in 1902, but it didn’t really come into its own until the 20s when the number of automobiles trying to find their way across the roads of America skyrocketed. 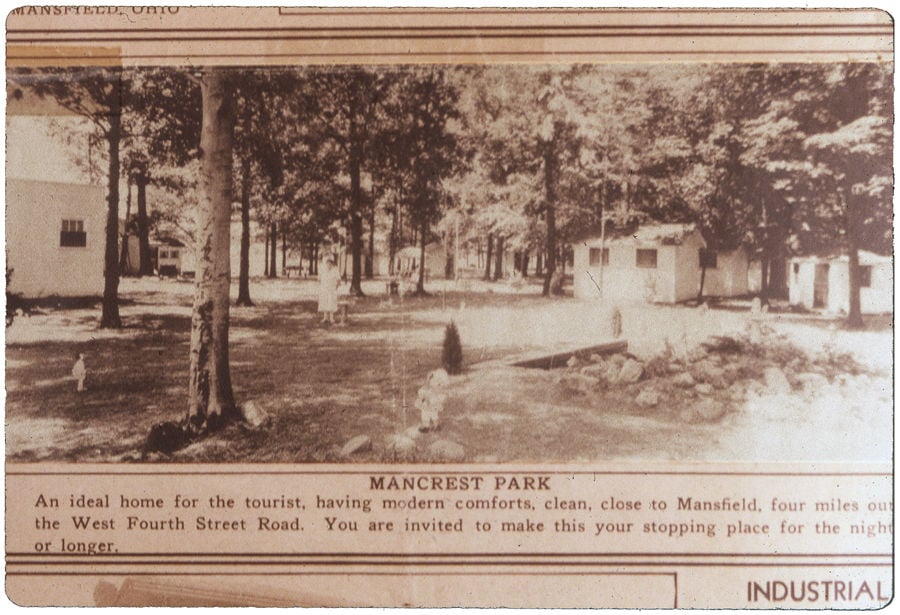 Roadsigns for the Lincoln Highway were done in red, white and blue, so it was common to find tourist stops along the way similarly painted, like Mancrest on West Fourth St between Mansfield and Crestline. 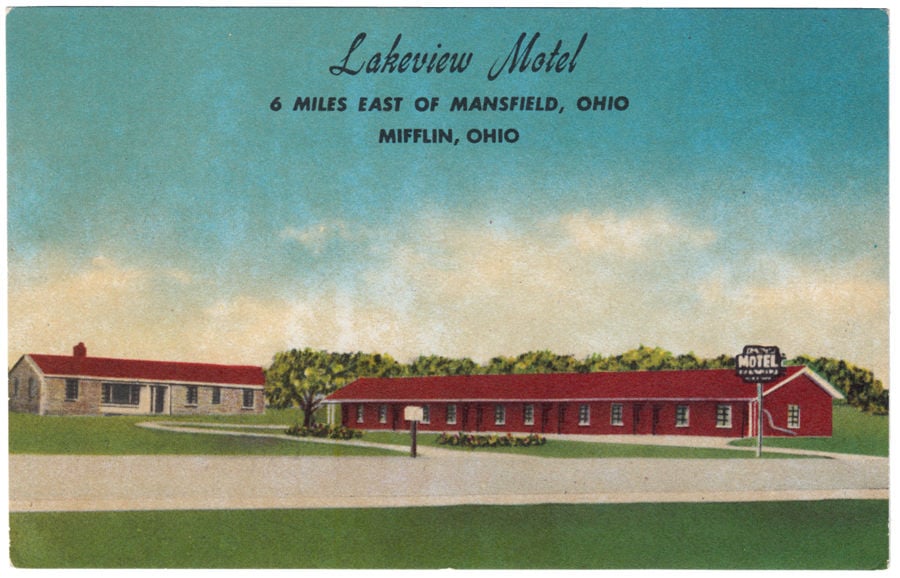 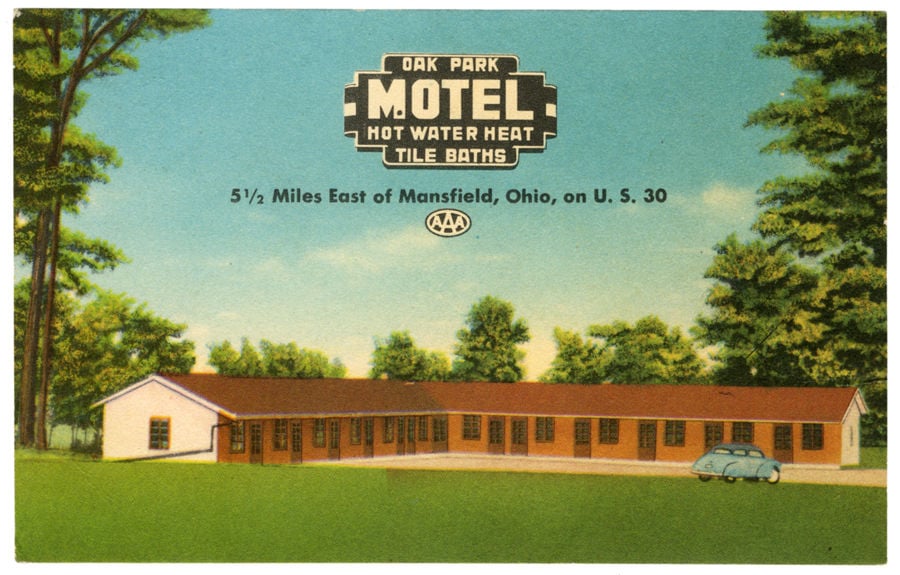 Folks who enjoy eating at Oak Park Tavern on Rt 430 will be interested to learn that its name derives from the original Oak Park Motel. The postcard says it had Hot Water Heat & Tile Baths. 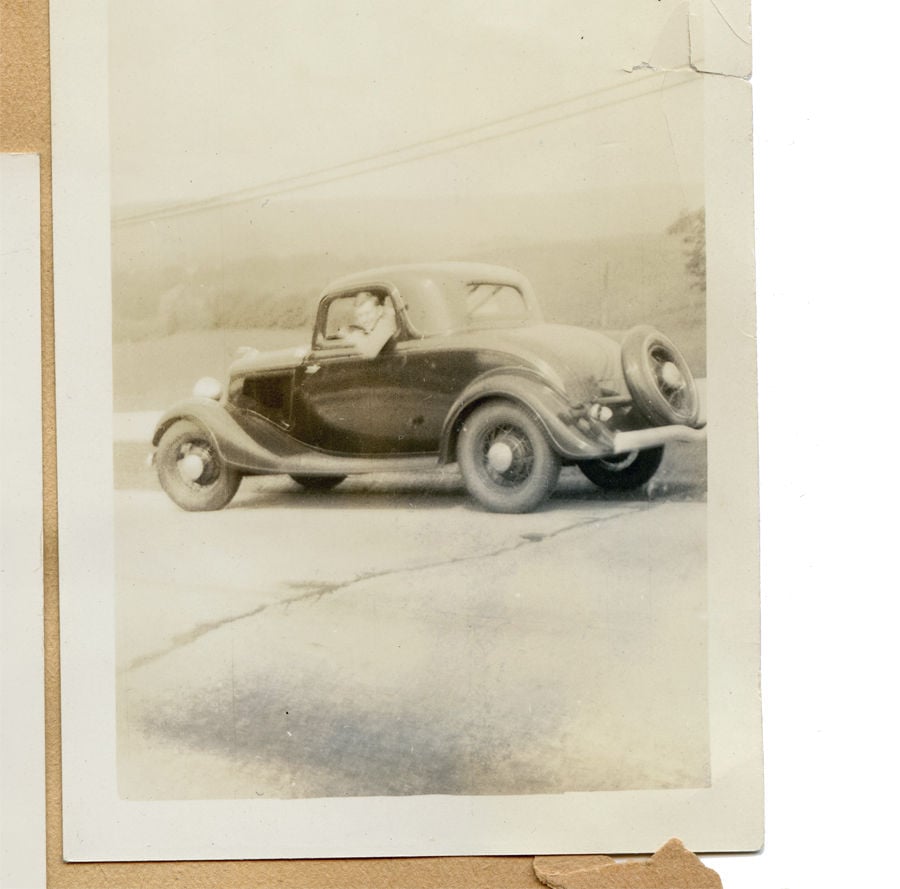 This young fellow took pictures all the way west along his trip on the Lincoln Highway.  This snap from his photo album shows him outside Crestline in his ‘34 Ford.

Everybody loves to feel free, and there is little that is more freeing than being at the wheel and having the open road in front of you.

Think how especially freeing it must have been in the 1920s and 30s when, after decades of bumpy horse-drawn carriages, there were suddenly nice smooth rubber tires rolling underneath you; and after lifetimes of rutted dirt thoroughfares suddenly there were long stretches of paved roadways.

Everyone back then wanted to have an automobile, and everyone who had one wanted to get out and explore the world beyond the confines of their life in town or on the farm. All those new drivers needed a place to stay overnight out there on the road, so that was the era that saw the appearance of a whole new American enterprise: the Auto Parks, the Tourist Cabins, and the Motels.

In those exciting days of increasing mobility Richland County was a crossroad of significant cross-country routes, so it is not surprising that a whole host of roadside overnight lodgings sprouted up here and took root in the fertile landscape.

The Lincoln Highway rolled through Richland County from its very inception in 1913. In the early days it was comprised simply of an assemblage of designated east-west roads already in existence, and hardly any of them were paved. After WWI a serious effort was made to address road conditions, so during the 20s the highway was increasingly improved. By the 1930s the route was really attractive to tourists, and heavily traveled.

In Richland County there were two alternate Lincoln Highway routes that converged in Mansfield, so there was an extra abundance of roadside to exploit with tourist accommodations of all kinds on the northern route and the southern route.

The other major road passing through Richland County was the main highway connecting Cleveland with Columbus and Cincinnati:  Route 42.

Anyone who owned a stretch of roadside along what is today Routes 430, 42, 309 or West Fourth Street had guaranteed traffic and customers if they put up a few tourist cabins. There weren’t a lot of regulating standards in those early days of motelery, so the concept of what constituted acceptable amenities ran a pretty wide spectrum. A family driving across the county had the option of pitching a tent beside their car; or parking next to a 10’ x 12’ repurposed chicken shed that had a communal shower out back; or checking into a 10-room motel that had a small diner out front.

None of these places advertised anywhere other than the AAA highway guidebook, because most people didn't set out to go to an overnight inn—they simply found one along the way. It spawned a whole new race of adventurers who were not intimidated by spontaneity.

What emerged in the late 20s-early 30s was essentially an entirely new paradigm in American culture. The quality of restlessness that had for lifetimes been laying dormant in the pioneering American personality was suddenly quickened with possibility and spurred to action.

Even in the deepest depths of the Great Depression families were on the road, and it was during this generation that the tradition of “vacation” really became embedded in the common experience of all levels and classes of society.

After driving for hours folks didn't want to have to face pulling into town and going through the entire procedure it required to check into a hotel like their grandparents would have done: finding a place to park, looking decent enough to register at the desk, moving the luggage, etc.  There was a new modern system evolving where all they had to do was pull off the road, hand a couple bucks out the window, and park a few feet from their own private cabin.

It pretty much spelled the doom of the city’s grand old hotels that had—for generations—served a class of guests who all arrived in town by the railroad with very different assumptions about what was required of accommodations.

That younger generation of the 30s had wheels of their own, and weren't about to fit into anybody’s schedule. They could improvise on the fly and were headed out anywhere the road could take them.