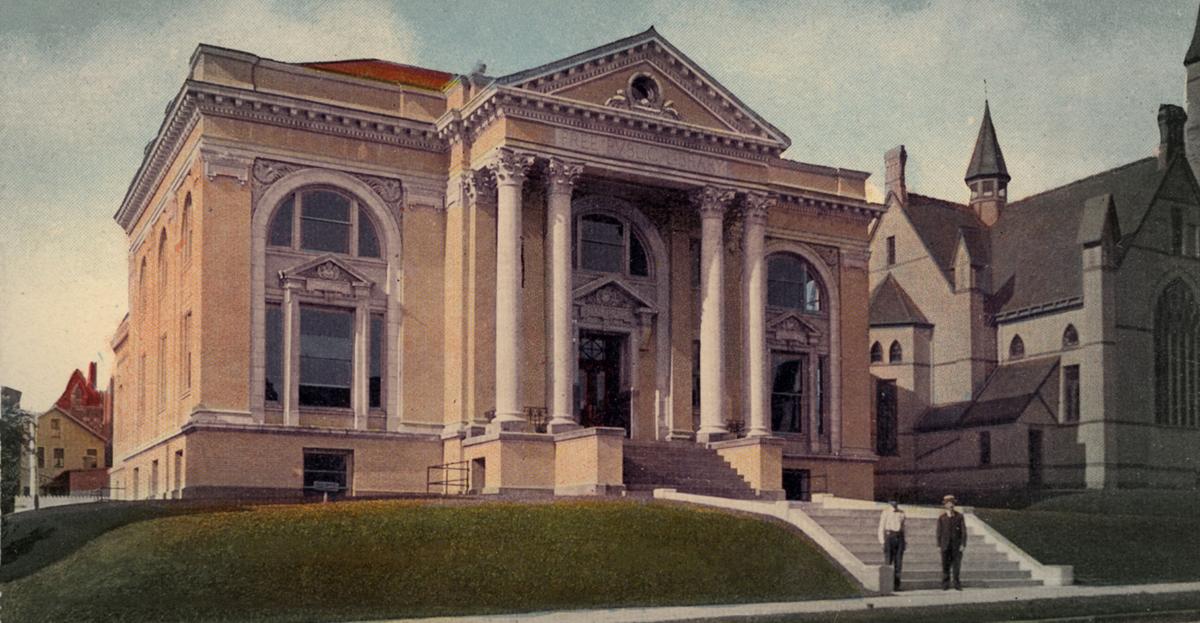 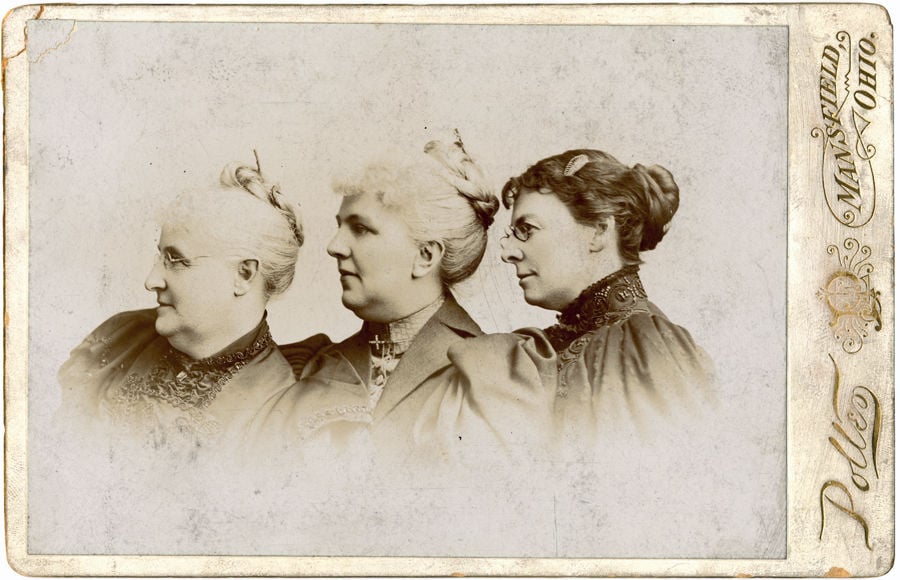 The organization which eventually became the library we know today, began in 1887 when three prominent Mansfielders called a meeting of 50 women to form the Mansfield Memorial Library Association.  Emily Huggins, Mary Mitchell, and Helen Weaver undertook to launch the project by gathering over 800 books in the first year.

In 1896 the Mansfield News asserted, “One point which has been touched upon but slightly, is the fact that Memorial Library was organized, incorporated, and is managed solely by women.  Numerous attempts had been made at different times by the sons of Adam to organize and propagate an institution such as this in Mansfield, but it was not until women took the matter in charge that it was a success.” 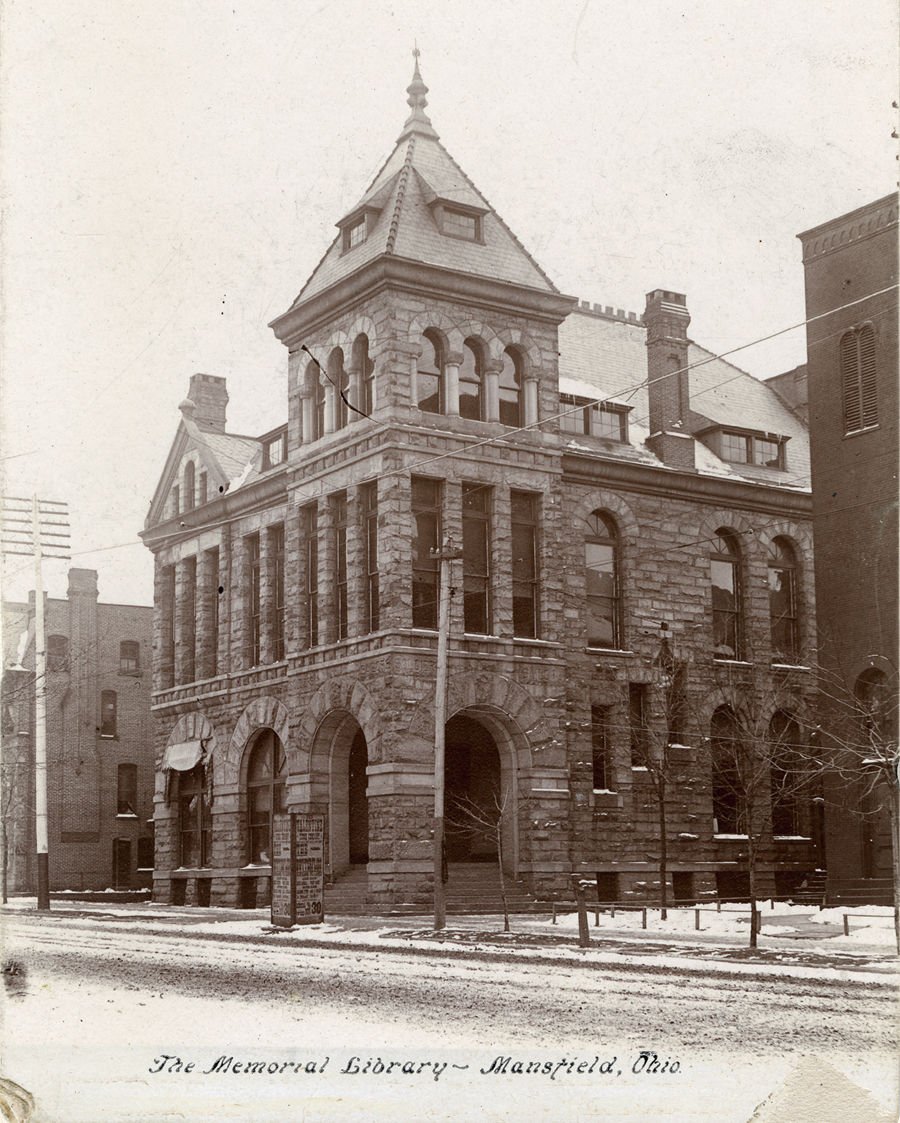 In collaboration with a local Civil War Veterans organization, the Mansfield Memorial Library Association was able to have legislation passed and funds established to build a Memorial Hall and Library that opened in 1888.  With a meeting hall for the GAR veterans, and housing an Opera House as well, the building came to be known eventually as the Soldiers and Sailors Museum, though it opened originally with two front rooms for the library: a reading room and one for books.

Sharing a building with other organizations proved difficult and finances were erratic, but the young Library prospered over the next decade and grew to contain over 7000 books, 39 periodicals, and 22 newspapers, serving over 100 in daily attendance and circulating 30,000 items annually. 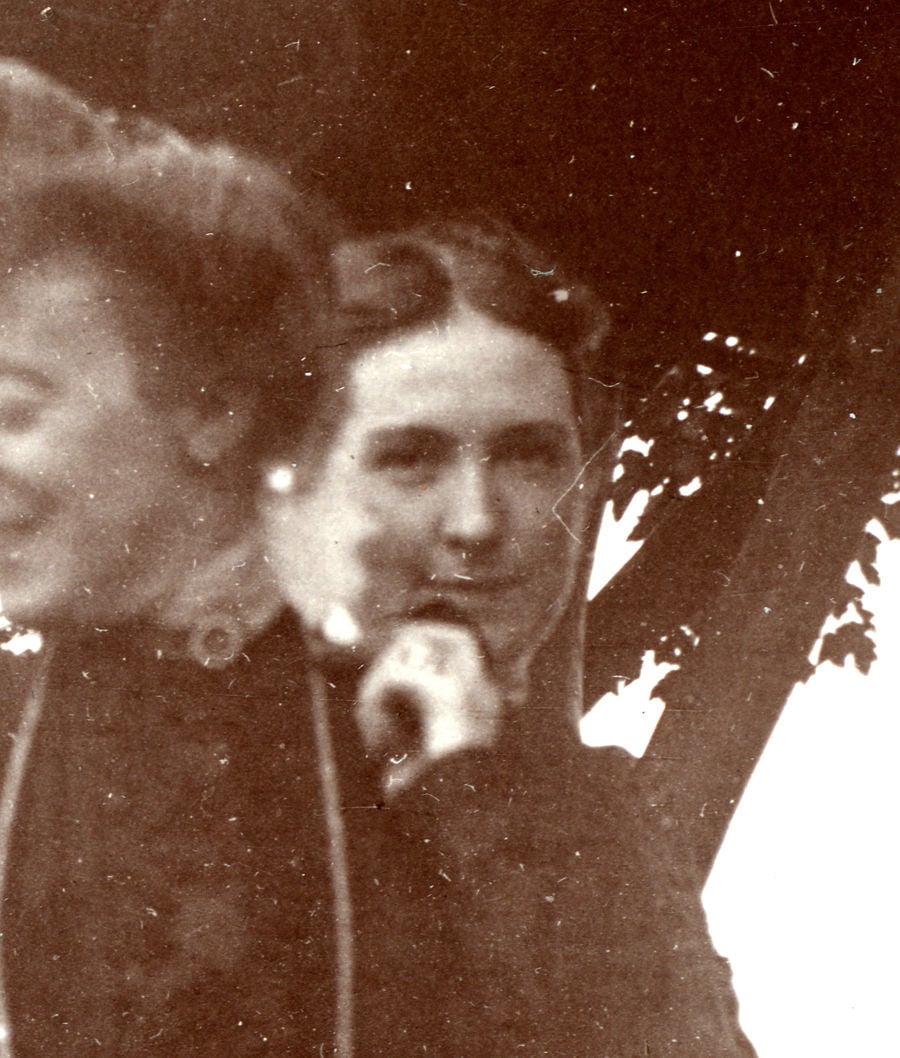 The work of the Library proceeded under the direction of Miss Martha Mercer, the librarian, whose concern with overcrowding and unruly Veterans led her to approach the Andrew Carnegie Foundation in 1903 about the possibility of obtaining a new library building in Mansfield.

This is the only photograph we have of Miss Mercer, who brought the Carnegie grant to Mansfield, found in a scrapbook belonging to Senator John Sherman’s daughter.  The picture was taken at Sherman’s estate on Park Avenue West during the same summer that Miss Mercer made her trip to New York to talk with the Carnegie administrators. 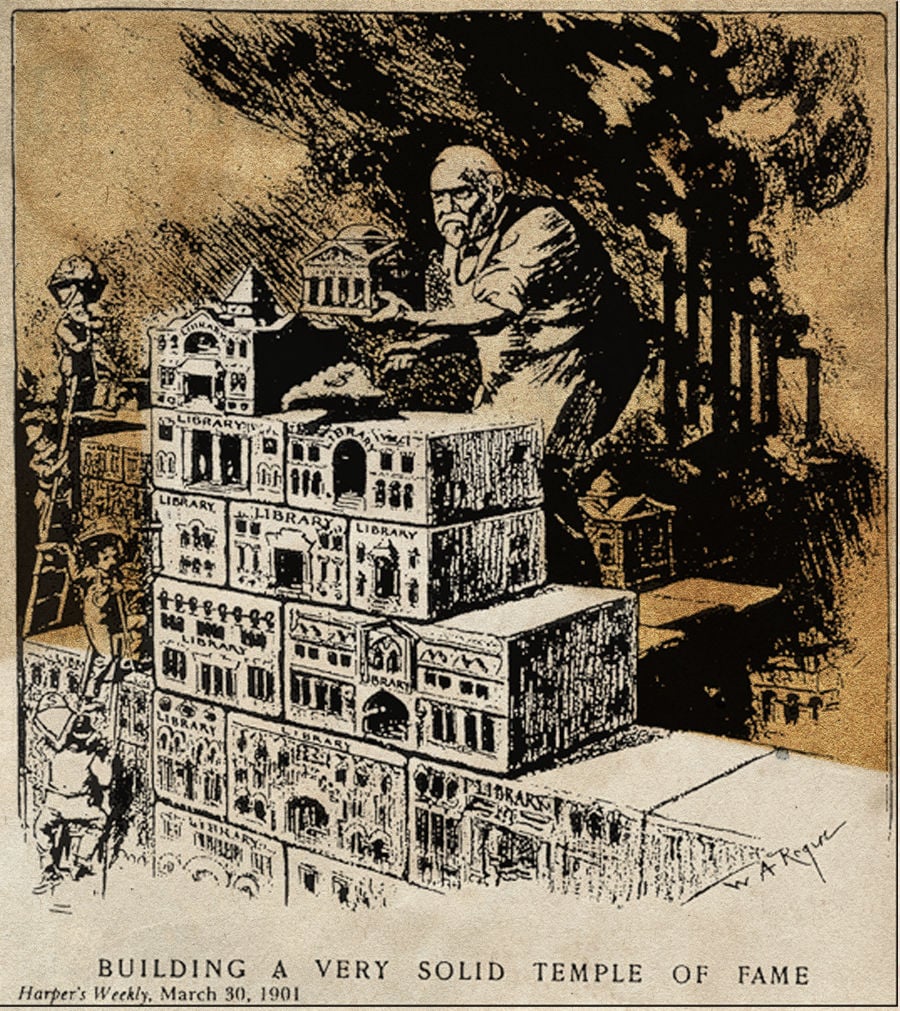 Andrew Carnegie retired from business in 1901 as the richest man in the world, so he could devote his time to practice what he called the Gospel of Wealth.  In the next decades he made good on the promise by giving away 350 million dollars, and when he couldn’t give it away fast enough, he created the Carnegie Corporation to give it away for him.

Carnegie paid for the construction of 1,689 public library buildings throughout the country in large cities and tiny crossroads alike.  His buildings served an estimated patronage of thirty-five million people.  More than any other individual, Carnegie was responsible for dispersing these public institutions of learning and entertainment, and making them a key landmark on the American landscape.

Andrew Carnegie repeatedly stated that his public library buildings weren’t philanthropy because they “only help those who help themselves.”  This explanation never satisfied his critics – who always contended that the US Libraries were the way in which the “robber baron” salved his conscience for abusing American laborers. 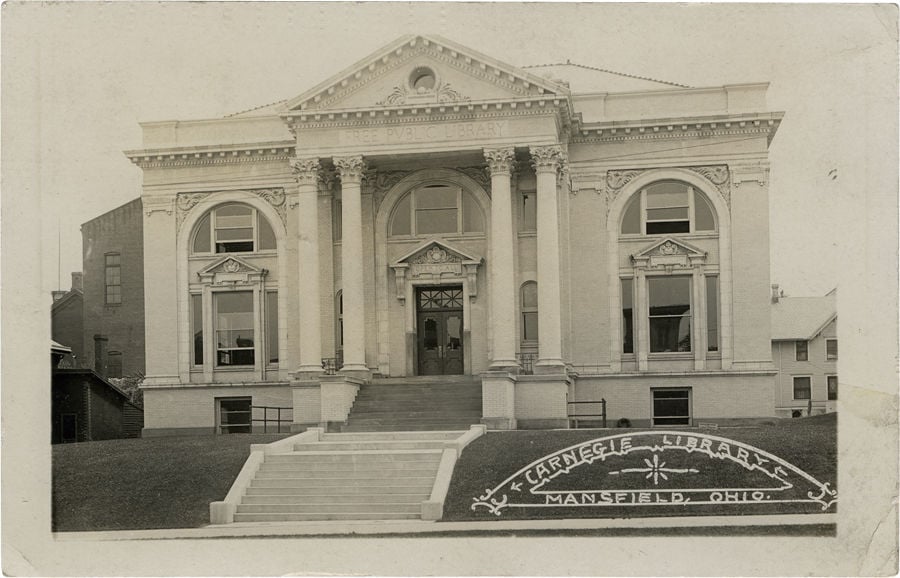 Mansfield’s new Carnegie Free Public Library was built at a cost of nearly $50,000, and formally opened its doors on December 19, 1908.

The exterior was constructed of white vitrified brick and white enameled terra cotta.  The roof was red tile.  Large corinthian columns flanked the front entrance.  The building measured 100 feet by 62 feet.  The Mansfield News described the interior woodwork as “finished in Flemish Oak and floors were covered in soft green cork carpeting which was perfectly noiseless.”

The semi-circular stack room at the rear of the library held radiating stacks designed to hold 40,000 books.  The entire building was equipped with electric and gas lighting.  A two-story center court opened to a beautiful stained glass dome, a gift of the Larwill Library Fund.  The lower level contained a large auditorium designed to hold 500 people. 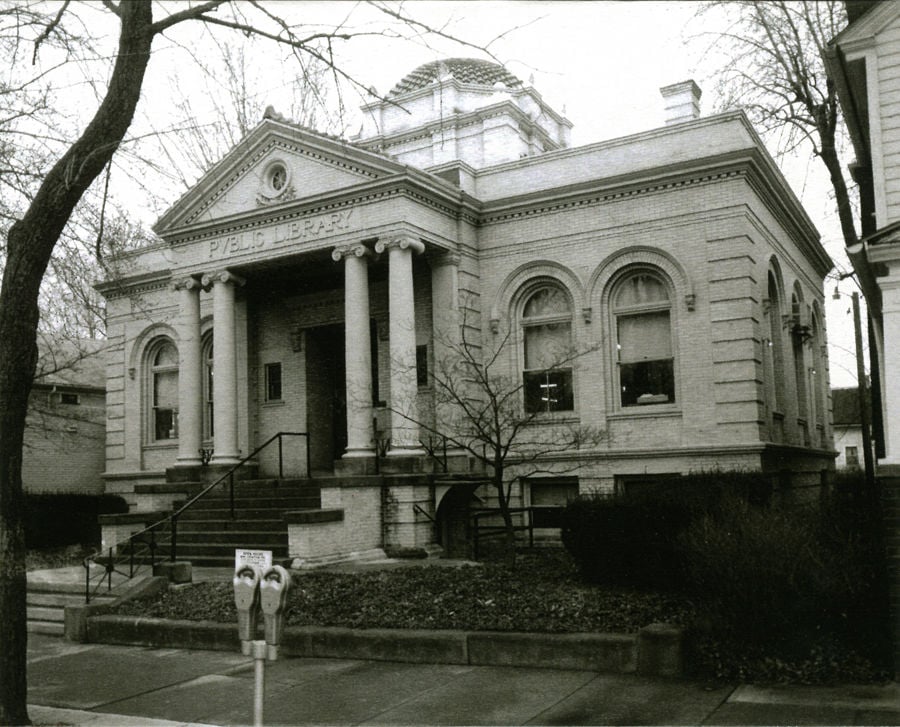 The Library in Mansfield was designed by Vernon Redding, the town’s most distinguished architect.

Redding was born in Ashland in 1866, and established his firm in Mansfield on Main Street in 1895, after having worked in New York City and Akron, Ohio.  During his career of forty years in Mansfield, he designed at least 60 buildings here and in nearby communities, including the Leland Hotel and Mansfield hospital.

The Galion Public Library, seen here, bears a great deal of resemblance to our building because it was designed by Redding four years before Mansfield’s.  It was clearly the springboard for ours, with the same elements simply rearranged and modified for an enlarged scale.  The dome that crowned the Galion building became a large rotunda at the rear of our later design. 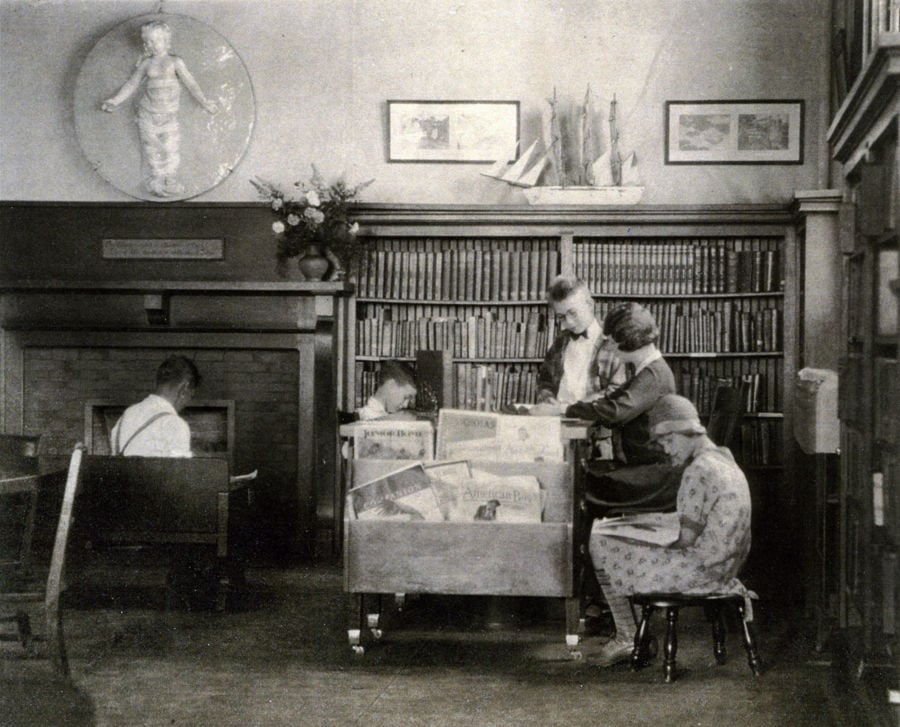 The children's reading room of the 1920s occupied a section of the original building that has been dramatically altered in our time: today encompassing the second floor lobby at the top of the stairs. 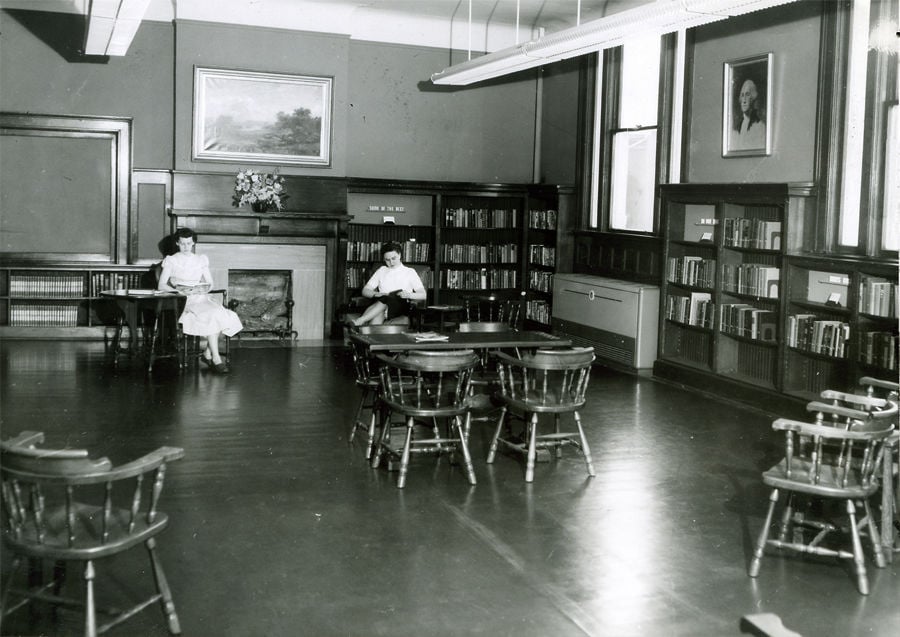 This photo, taken in the 1950s, shows the Reading Room; the same spot in the building as seen in the children's photo above, after it had been remodeled. 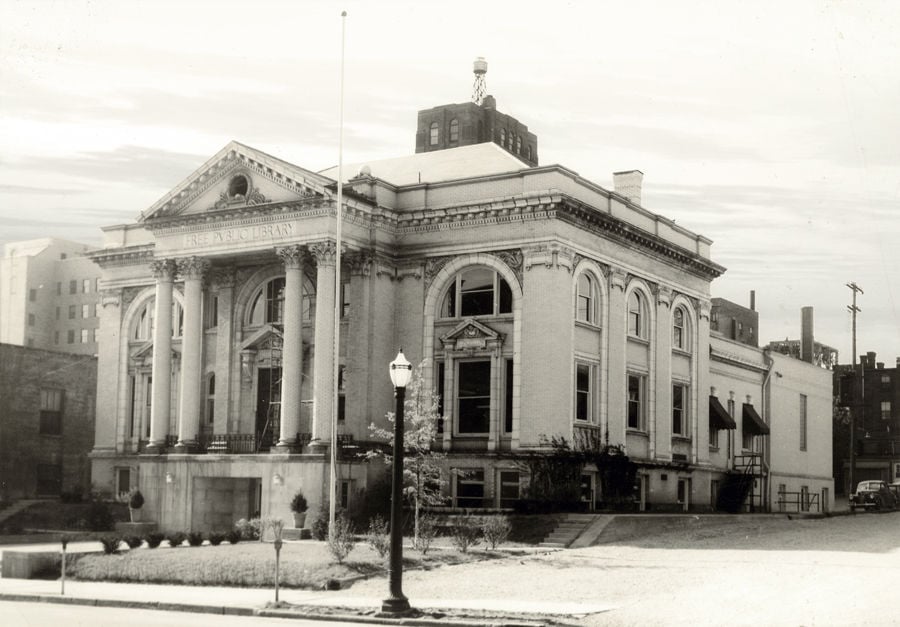 By 1945, after almost fifty years of use, the library building was showing signs of wear and overcrowding.  A post-war remodeling project was proposed and two bond issues were passed in 1945 and 1948.  The revamped structure was dedicated on May 20, 1951.  The project included a large extension on the rear of the building, and a street-level entrance.  The cost was $122,000, two and a half times the price for the original structure.

In the 1951 remodeling, the front steps to the Library were eliminated, and what had once been the front porch turned into a balcony portico. 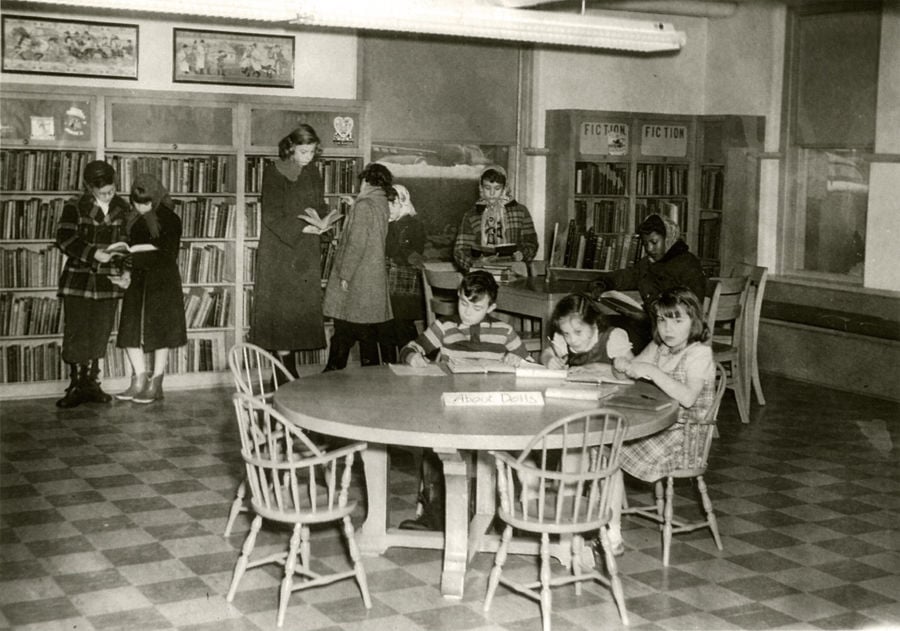 After the 1951 revision of the Library, the Children's Department had their own section of the building.  This photo shows the Newberry Room, which was located on the ground floor level.  The window appears darkened because it opened onto a below-ground window well. 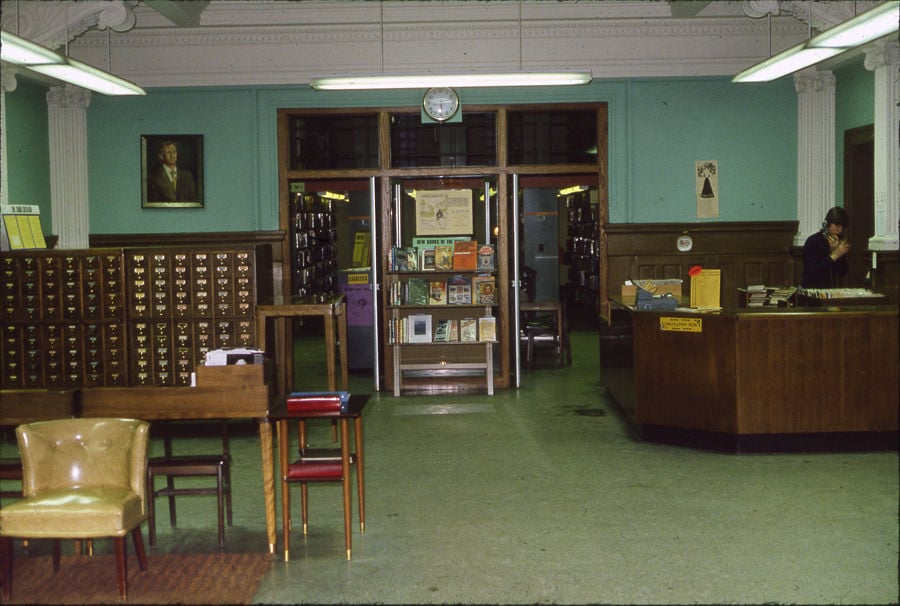 This photo from the 1960s shows the circulation desk on the right, the card catalog on the left, and the stacks through the doors in the center.  Today this scene is where the stairs enter the second floor. 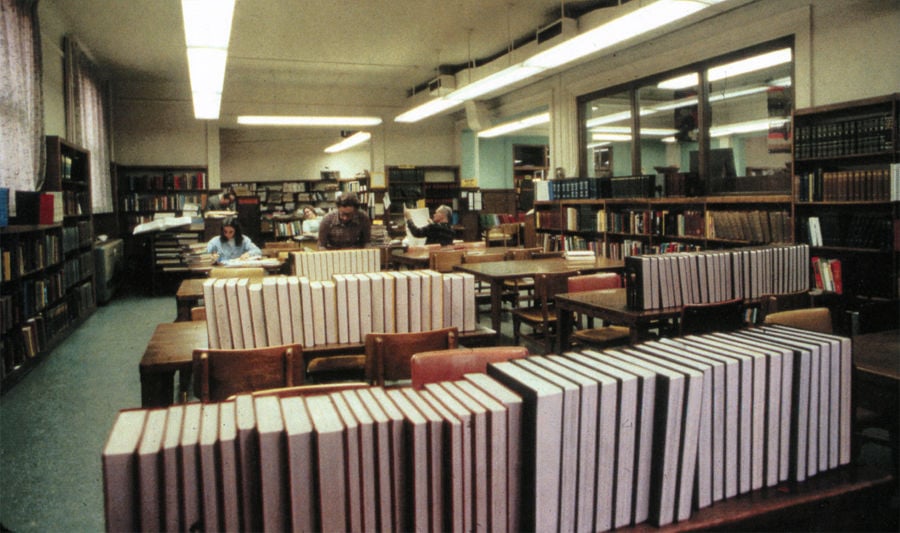 The Reference Room in the 1960s is today part of the upstairs lobby. 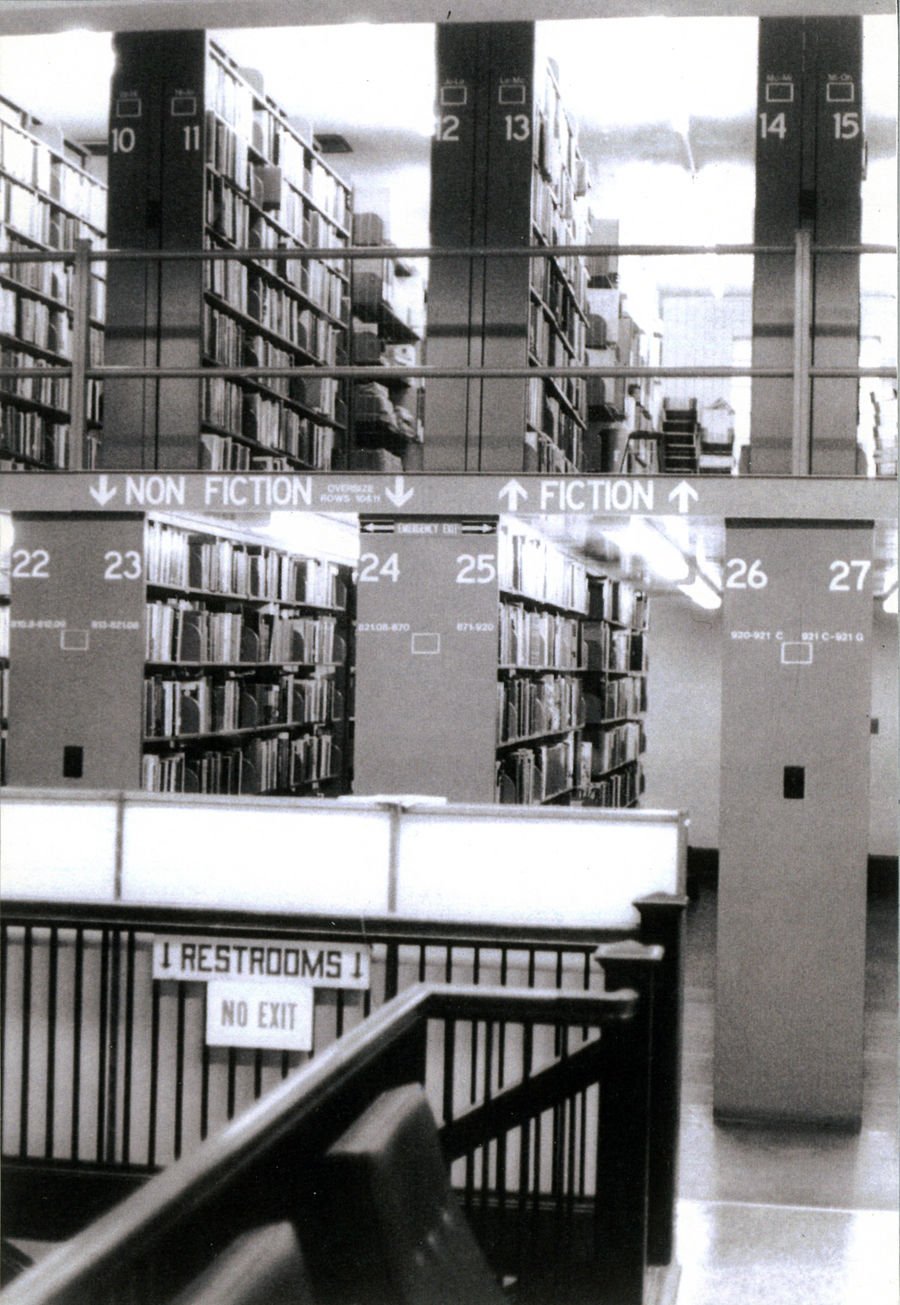 The original configuration of the Library stacks was, appropriately enough, stacked.  There was a metal floor underneath the upper shelves, and a stairway at the end.  The stacks were located in the part of the building where the Audio/Visual Department is found today. 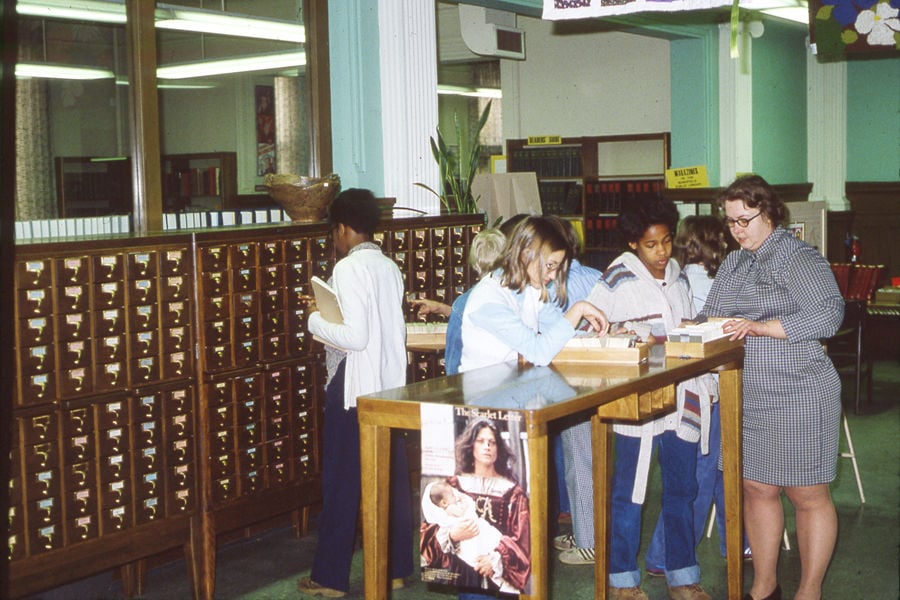 Today the entire Library Catalog can be displayed in a small tablet or phone, but in the 20th century it required these well-thumbed generations of cards. 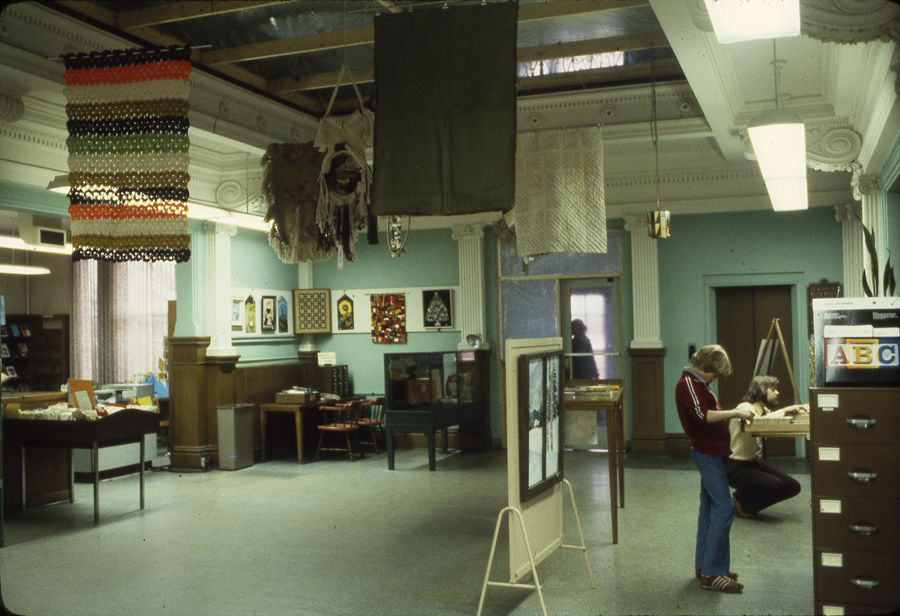 This photo is easily dated because of the extensive use of plastic sheeting: it was taken during the 1970s energy crisis. The doorway in the background, and the entire third floor mezzanine are blocked off with plastic to keep the heat in. 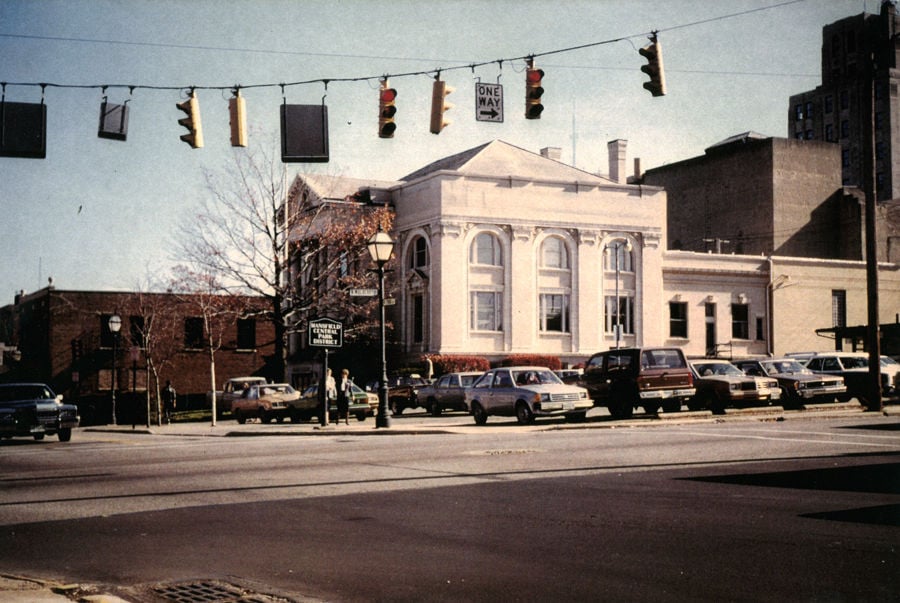 By the 1970s, the modest building of 1908 had grown into the Mansfield/Richland County Public Library, with nine Branch locations. The original building was bursting at the seams, so the library asked the public to support a massive revisioning of the Third Street facility. Every funding levy failed that had plans to replace the old original Carnegie building, because the place was so embedded into the hearts and memories of the county. 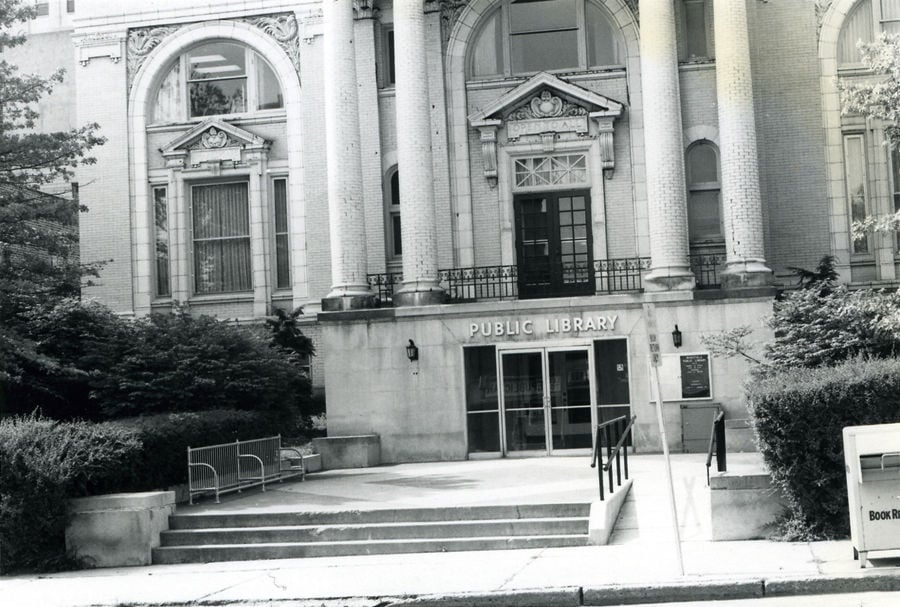 Richland County voters finally approved a bond issue in May of 1986 to expand and improve the Library.  This 4.3 million dollar project tripled the size of the existing building while keeping the original Carnegie Free Library intact. 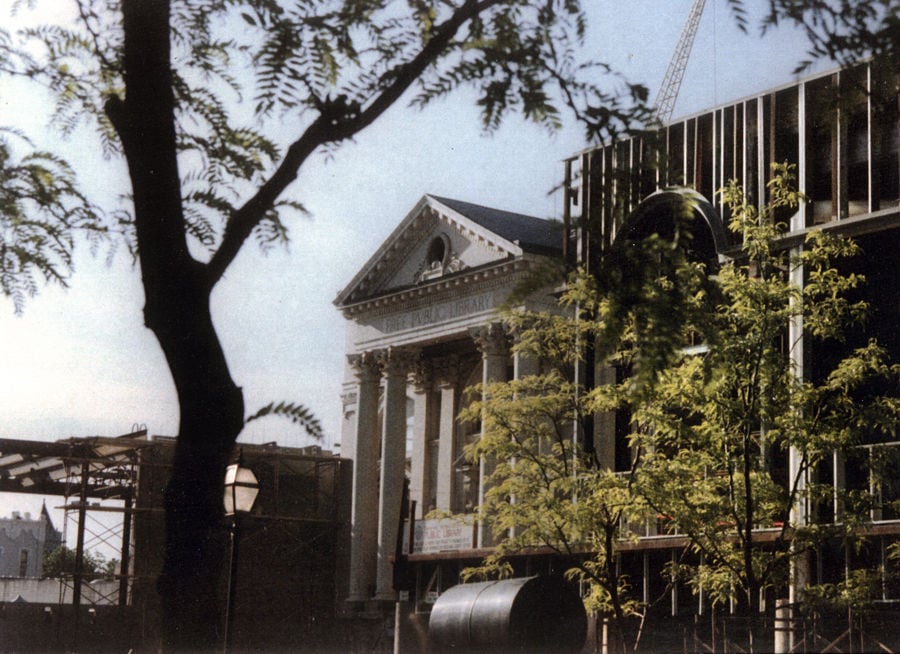 When construction began for the 1987 addition, the entire Library packed up and moved to Park Avenue where it lived in exile for two years. 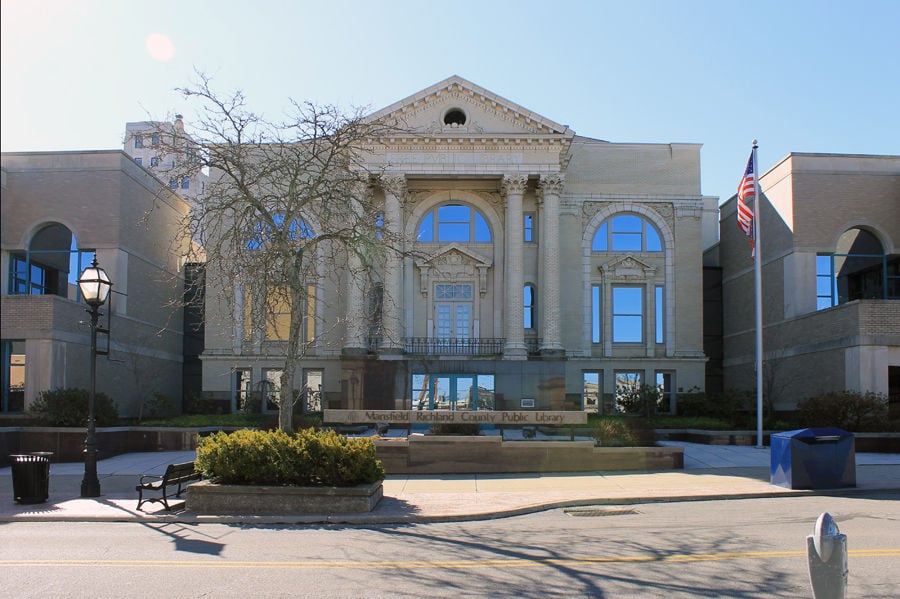 Today, modern Library facilities serve to bookend the original classic structure in a brilliant synthesis of old and new: an inspiring vision of how our present embraces our past in order to open our future. 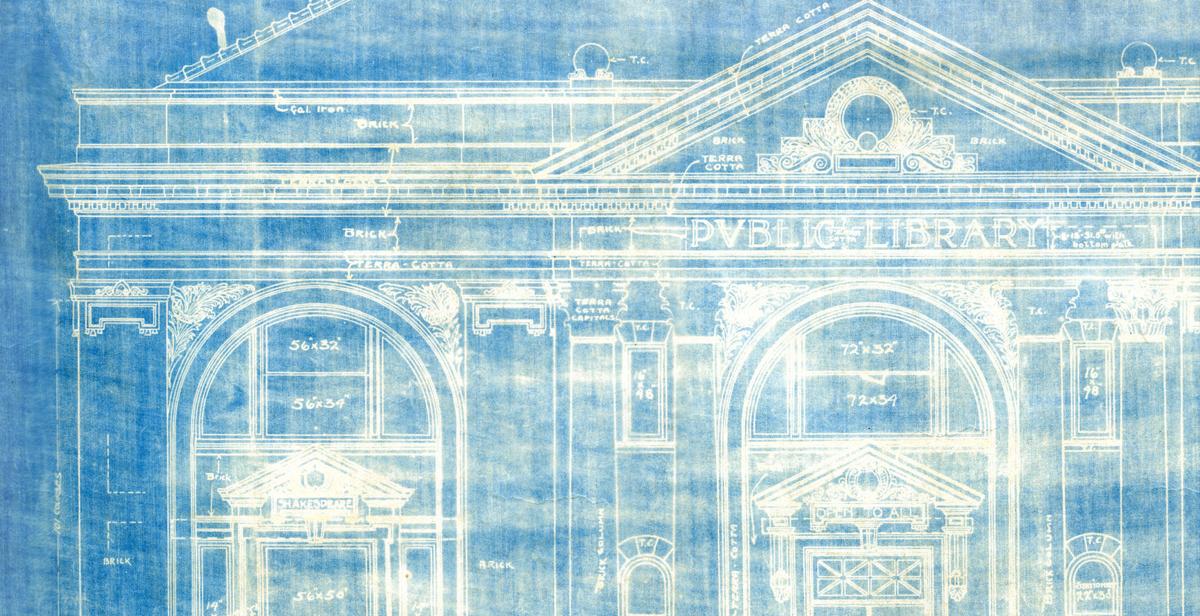 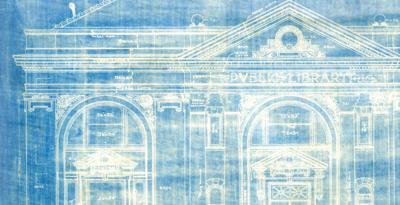 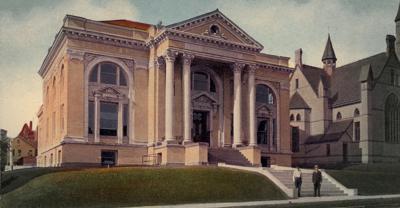 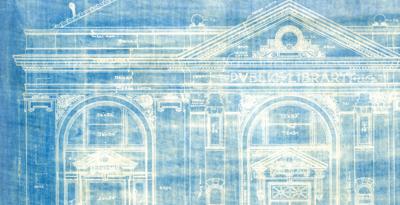 By any standards, the original Mansfield Carnegie Library on Third Street is a classic jewel of American civic architecture.

It is a purely 20th century synthesis of Greek and Roman designs, that was grafted into our cityscape with the intention of imbuing our city with ancient cultural sophistication. It is Old World wisdom informing present day cutting-edge vision.

We were fortunate to receive such a gift 100 years ago, and we are even more fortunate that it is still here today, as the institution blossomed into the Mansfield/Richland County Public Library.

Here is a brief photo essay to tell the story of how this beloved landmark came to grace our city, and how it evolved to what we see today.