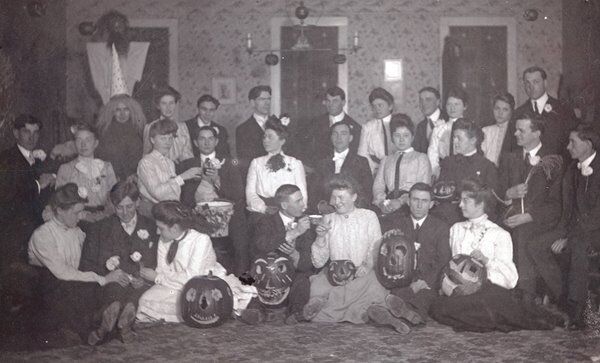 A Halloween party in Genoa, Ohio around 1900. Check out the jack-o-lantern designs. 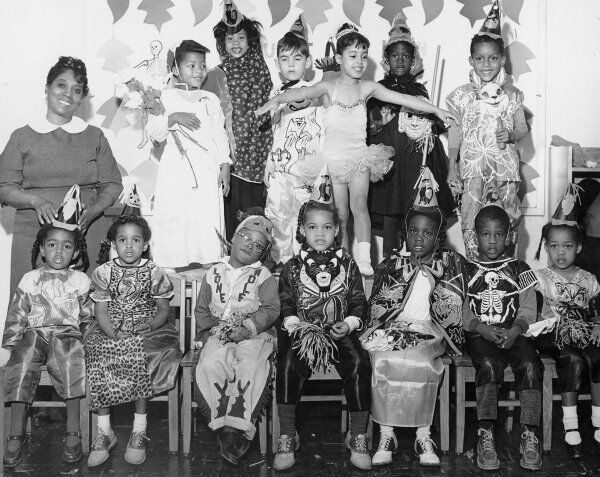 Students at the Rick’s Childhood Guidance Center dressed up for Halloween, ca. 1955-1960. 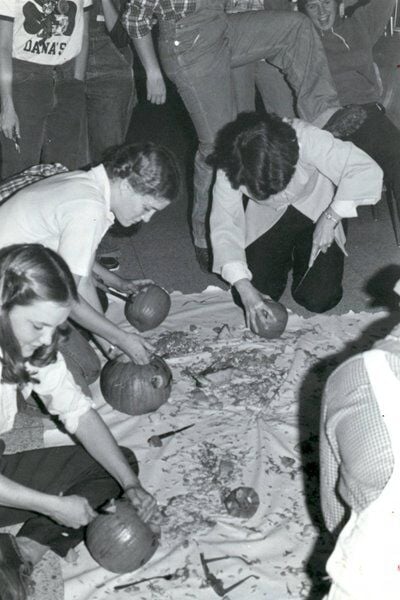 As the weather turns colder, many Ohio students may be thinking about something spooky – like Halloween.

Halloween is a cultural tradition that has a long history in the United States as a whole and in Ohio specifically. Let’s quickly review the holiday’s origins and then look at how Ohioans have celebrated over time.

Halloween began as an Irish and Scottish custom, dating back to the early years of Celtic people in the British Isles thousands of years ago. Originally known as Samhain (pronounced sow-in in Ireland), the day we now call Oct. 31 marked the end of the Celtic calendar year as well as the harvest season.

As with many holidays marking transitional times of year, Celtic people believed the barrier between the living and the dead was weakened on Oct. 31, which allowed the dead to revisit their favorite haunts (pun intended) but also for evil or strange spirits from the underworld to roam freely.

Fortune-telling was popular on this day as well, as people looked with hope and apprehension to the New Year. With the coming of Christianity to Ireland around 400 AD the Catholic Church sought to put a Christian spin on this pagan festival, dubbing it “All Hallow’s Day” to honor the saints – and the night before as “All Hallow’s E’en” (hence, Halloween).

Halloween began as an Irish and Scottish custom, dating back to the early years of Celtic people in the British Isles thousands of years ago.

Halloween continued as a partly Christian, partly pagan celebration in Ireland until the 1840s, when the potato famine drove millions of Irish to seek refuge in the United States.

Like any immigrant group, they brought their traditions with them, including Halloween. Traditions we know today – like bobbing for apples or pumpkin carving – began during this period. Fun fact: people originally carved faces into turnips, not pumpkins.

By the late 1800s, Halloween started to have a rough-and-tumble reputation. Groups of people – usually young adults – began playing pranks.

The Mahoning Dispatch in 1879 details shenanigans students at Hiram College got into for Halloween, “destroying property of every description.” They dressed the college hall with holiday-appropriate decorations (pumpkins, wagons), then stole a live cow from a nearby field to add to the décor. Other students climbed a belfry to access the college bells, tied a long rope to one and “took the opportunity to jingle the bell for the benefit of the faculty.”

Although the article doesn’t specify, we can imagine the bell ringing at all hours of the night.

If property damage wasn’t your Halloween tradition of choice, why not attend a masquerade or costume party?

Ohioans all across the state hosted these parties, which began in the late 1800s and continue even today.

In 1889, attendees at the Durflinger’s Halloween party appeared in historical costumes. In 1919, Mrs. Joseph Cunningham decked out her Halloween party with spooky paper black cats, witches and ghosts as well as pumpkin lanterns and “other ghostly emblems.”

This set the scene for a costume contest during which “guessing the identity of the members caused much merriment.” Amherst, Ohio’s Sunday school class got in the Halloween spirit (pun intended, again) in 1941 with costumes, games, dinner and prizes.

Holidays are a great way to discuss cultural traditions and change over time with your students, and resources like Ohio Memory provide helpful examples of primary and secondary sources to help them draw conclusions. Are there any traditions from the past you’d like to bring back?