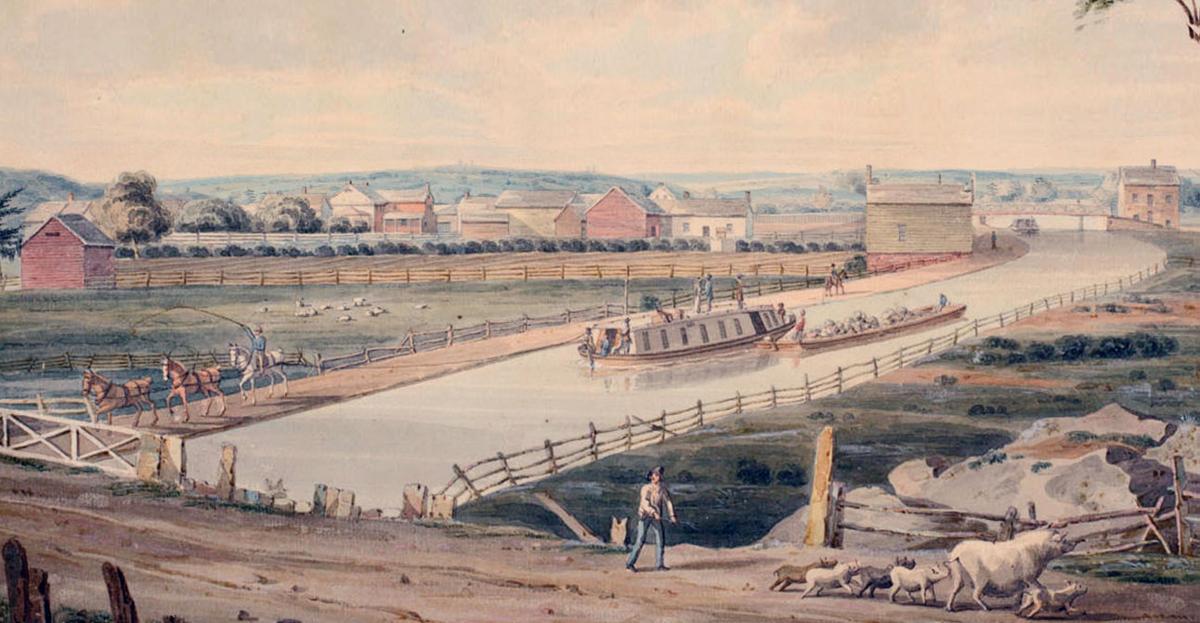 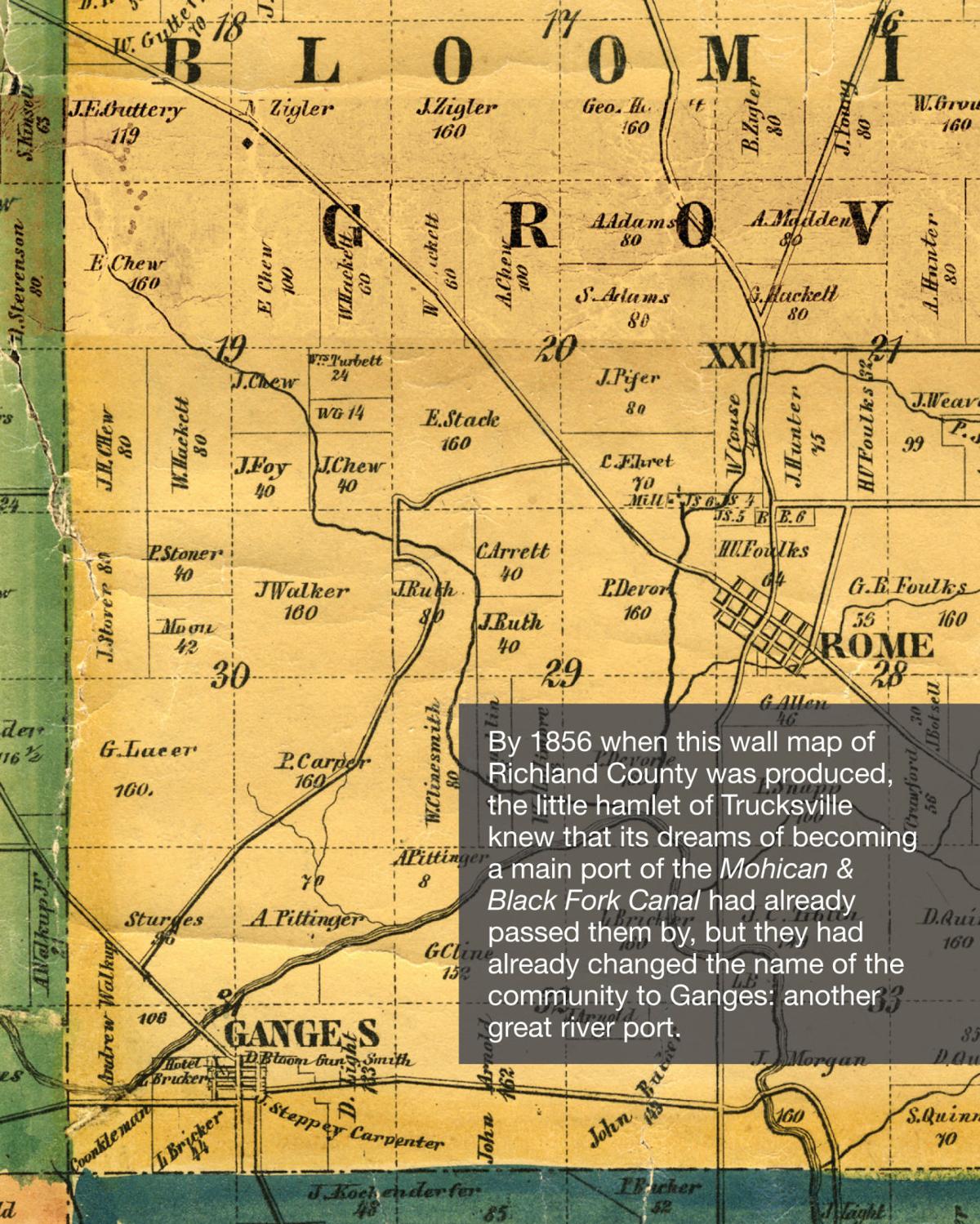 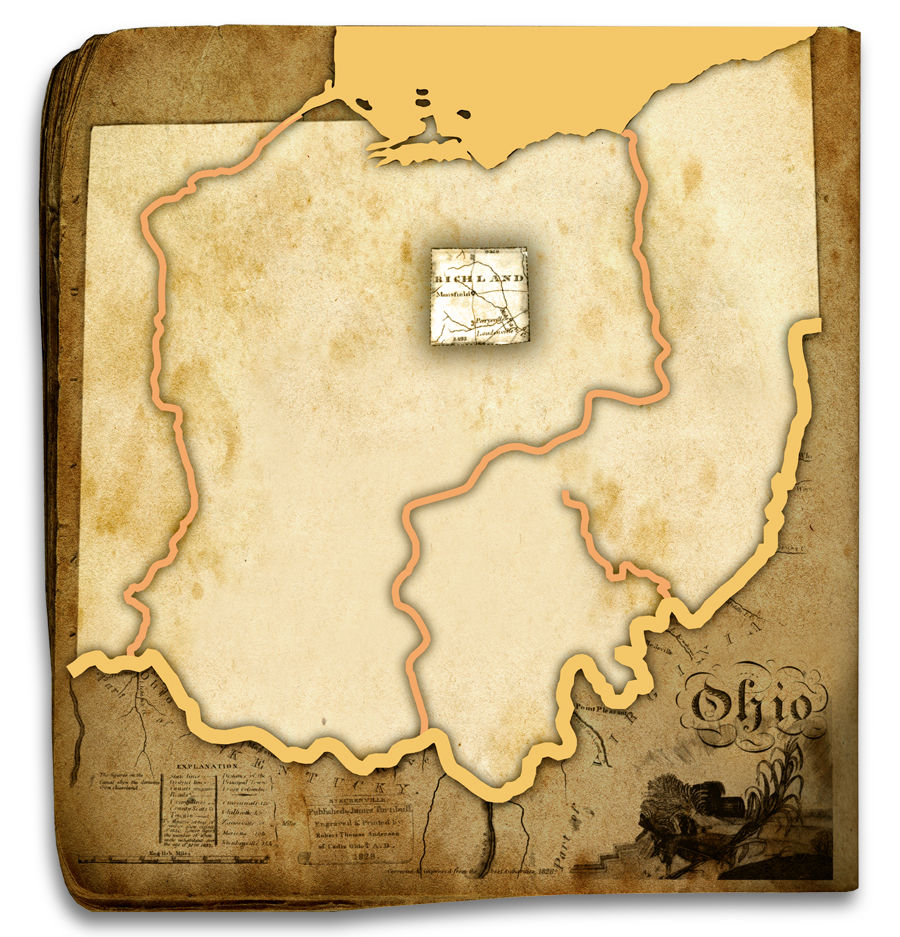 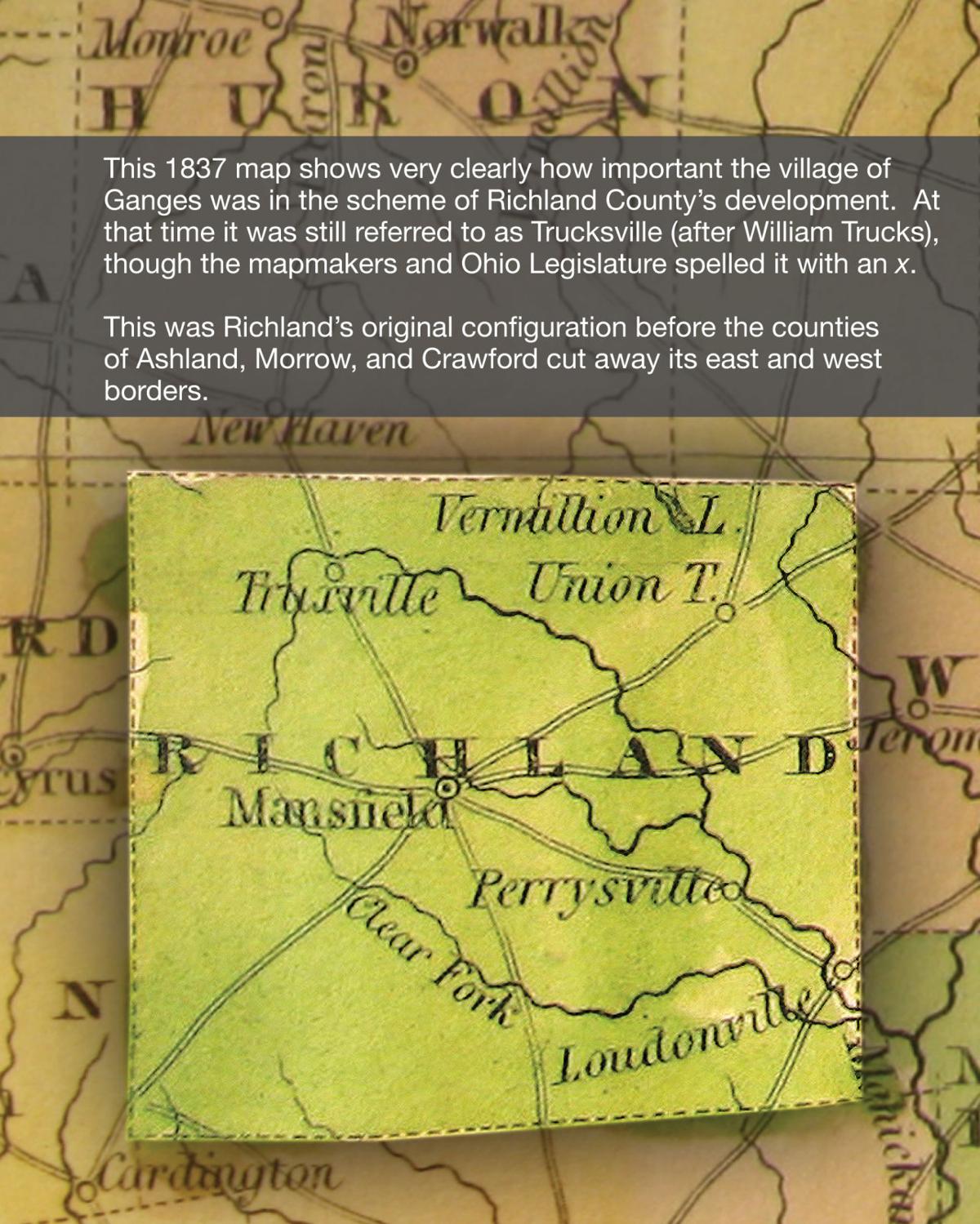 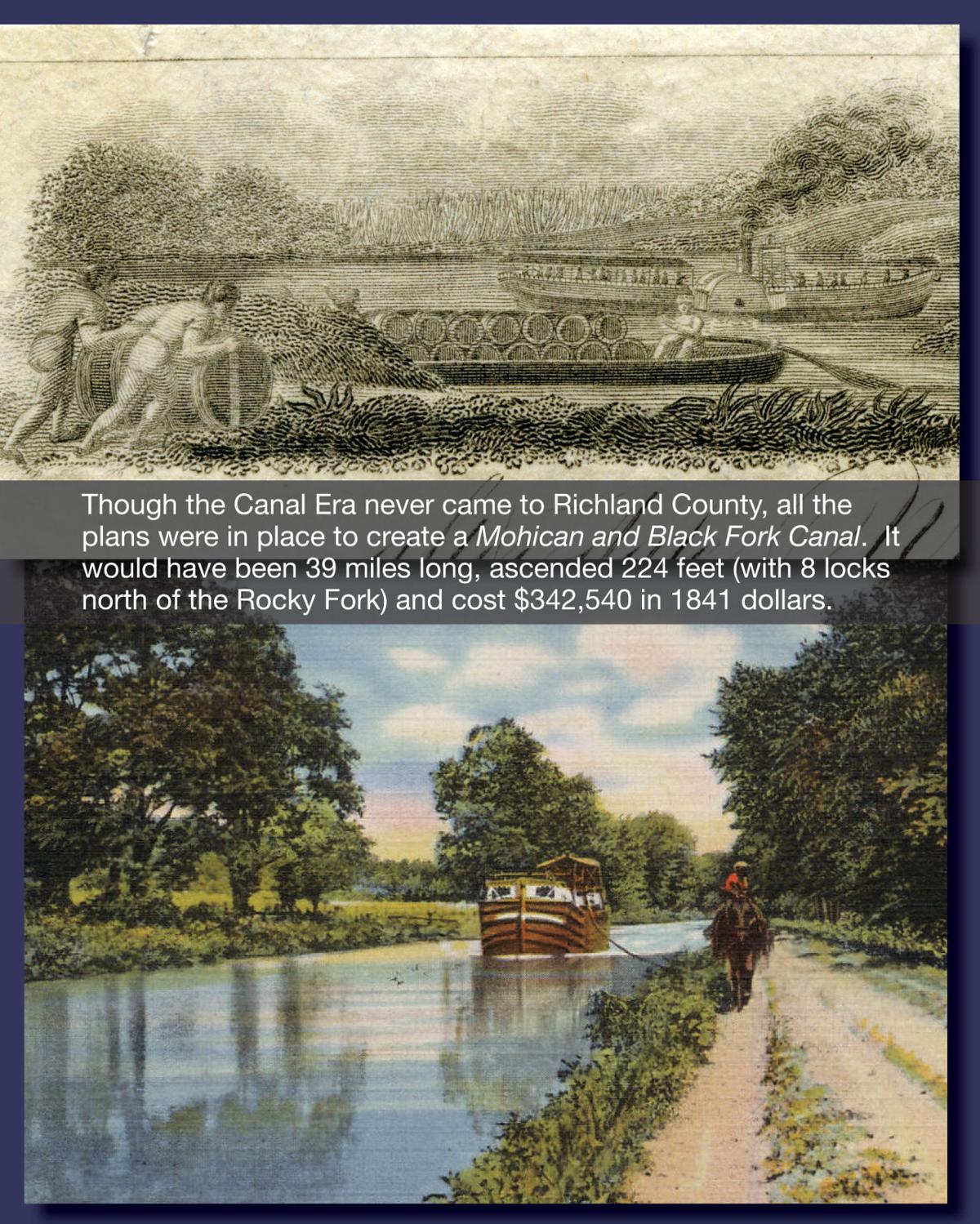 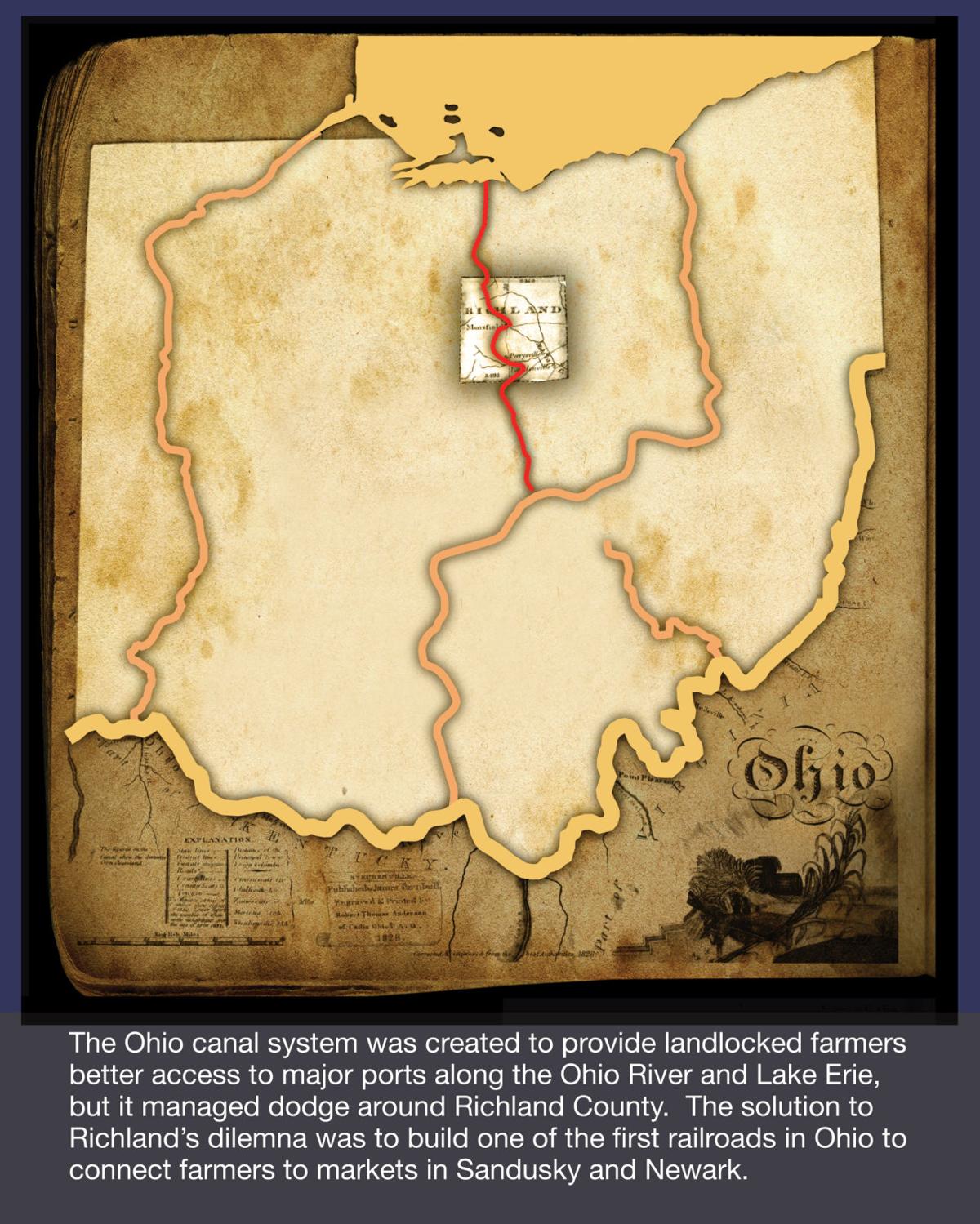 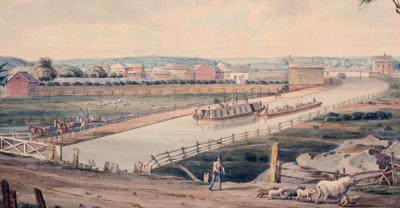 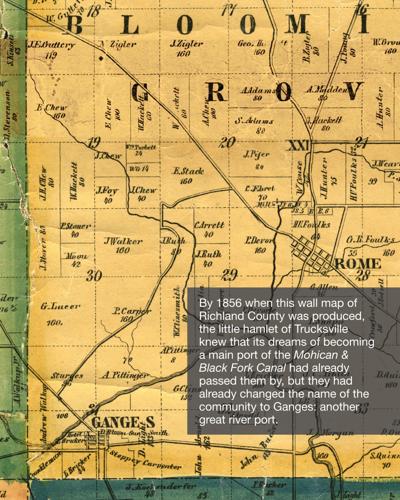 Ask any farmer in the county and they will tell you: having the best land, the strongest crops, the healthiest livestock doesn’t mean anything if you can’t sell what you produce.

That was the challenge, plain and simple, for farmers in the days when Richland County was young -- getting their produce to market.

In the early 1800s, when the forests were barely cleared off the rich soils of local farms, there was only one way to get crops to places where they were needed: and that was loading them up on a big farm wagon, hitching it up to the team of horses, oxen or donkeys, and driving it there yourself.

It was a tough job on rough, rutted, muddy roads.

When the Ohio canal system was created—so freight could gently and easily float to market — the entire agricultural economy of the state got a kickstart. Naturally everybody wanted a canal.

That was when Richland promoters dreamed up the Mohican and Black Fork Canal.

To reach the big markets where flour and hay and meat brought the highest prices—principally cities in the eastern US—a farmer needed access to a waterway that shipped to the East Coast. From Richland County the wagons had to go north to Sandusky, or south/east to the Ohio River…and both destinations were arduous journeys.

In the 1820s and 30s the State of Ohio developed two massive projects to dig inland waterways that connected the Ohio River to Lake Erie. By this way, with one canal running up the east side of the state and one on the west side, access to shipping ports was provided within a relatively short distance to farmers all over the state. Except for Richland County.

The routes charted for these Ohio canals seemed to dodge around Richland County because it is situated on Ohio’s high ground atop the Continental Divide, leaving farmers here high and dry.

It would be difficult to overstate the importance of the canals to farmers in Ohio. Before the canals existed they could get $.30 a bushel for their wheat because of the shipping costs, and after the canal was available their asking price rose to $.75. It also made all the incoming goods cheaper as well—important commodities like salt dropped from $.87 a pound to $.50 once freight glided in more smoothly.

For farmers in Richland County the closest canal was the Walhonding Canal down in Coshocton County, which was hardly less of a commute than it was to Lake Erie itself. So in 1836 local entrepreneurs started dreaming up a canal that could come up the Mohican River clear through the county to a loading dock at Ganges. It was called the Mohican and Black Fork Canal.

When you think of Ganges today it conjures a pretty picture of a country crossroads community perched on a hill above the Black Fork where the General Store faded away some years ago. Around four dozen households are bound together under the name Ganges, though when the little hamlet was first laid out in 1815 it went by the name of Trucksville, for William Trucks who built his mill there.

It’s hard to imagine that in 1837 this little community seriously entertained visions of greatness, and aspired to become the chief port and economic seat of Richland County. As soon as the canal was proposed in the Ohio Legislature, gentlemen of Ganges were eyeballing the surrounding fields for metropolitan expansion.

The plans were drawn, the surveys were taken, the estimates were already tallied. The canal was intended to be routed through the Mifflin area in order to take advantage of the water source there, where three natural lakes could provide enough flow to raise water levels in a series of locks to get through the Divide highlands.

Lucas wanted in on the action, and Mansfield was angling for an inside line, but the destination from the beginning was always Ganges because that was where an ancient tribal portage connected the Mohican watershed to the Sandusky River so Indians could canoe from the Ohio River to Lake Erie. It was the most natural, time-proven route.

So what was it that kept the dreams of a Black Fork canal from coming to reality? It was the railroad.

In the 1830s the art of transportation made a quantum leap in America when the B&O laid their first tracks around Baltimore. Quite simply stated, canals froze in the winter, trains did not.

One of the very first railroads in Ohio was the one that was built to connect Mansfield with Lake Erie at Sandusky, and in 1846 when new iron tracks led to the shipping ports suddenly Richland County got an advantage over every other inland farming community in the state, so digging a canal was the last thing on a taxpayer’s mind.

It was very good news for Richland County. Not such great news for dreamers in Ganges who pictured a metropolis in Blooming Grove Township, as you can see for yourself when you drive there today.