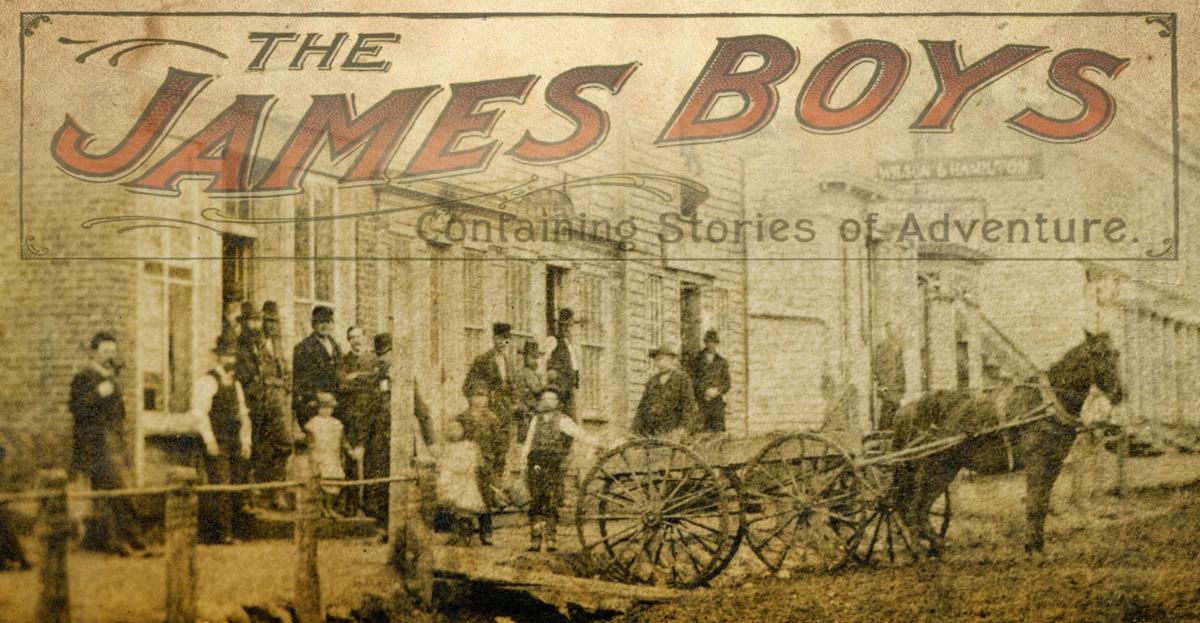 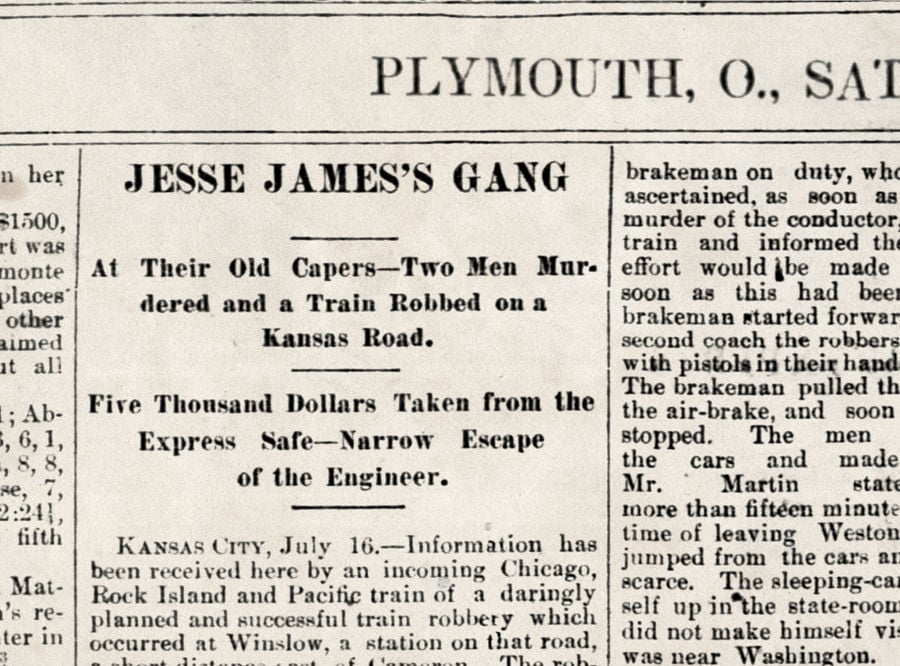 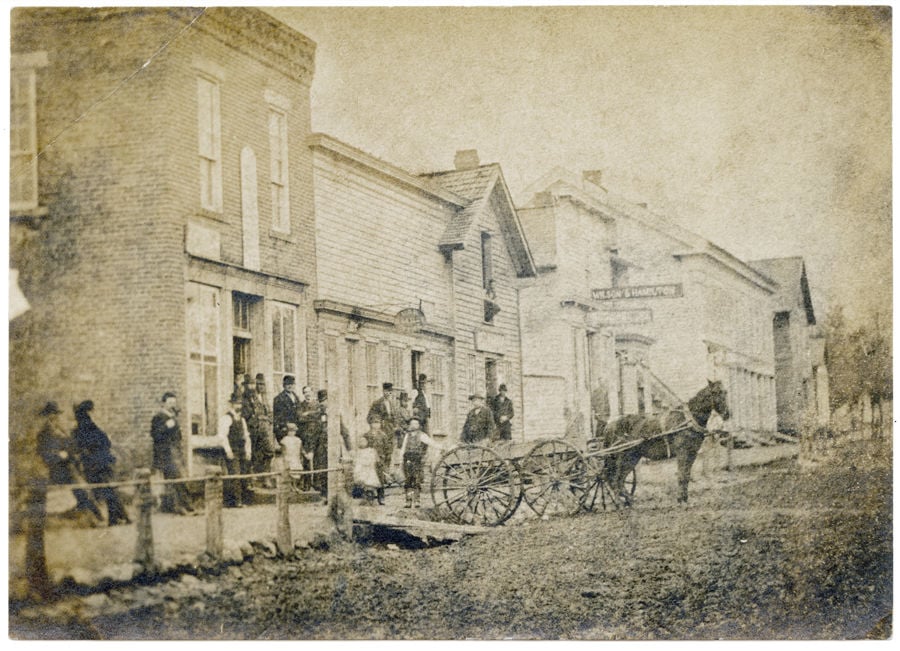 Main Street Lexington in 1879, from the Richland County Museum. 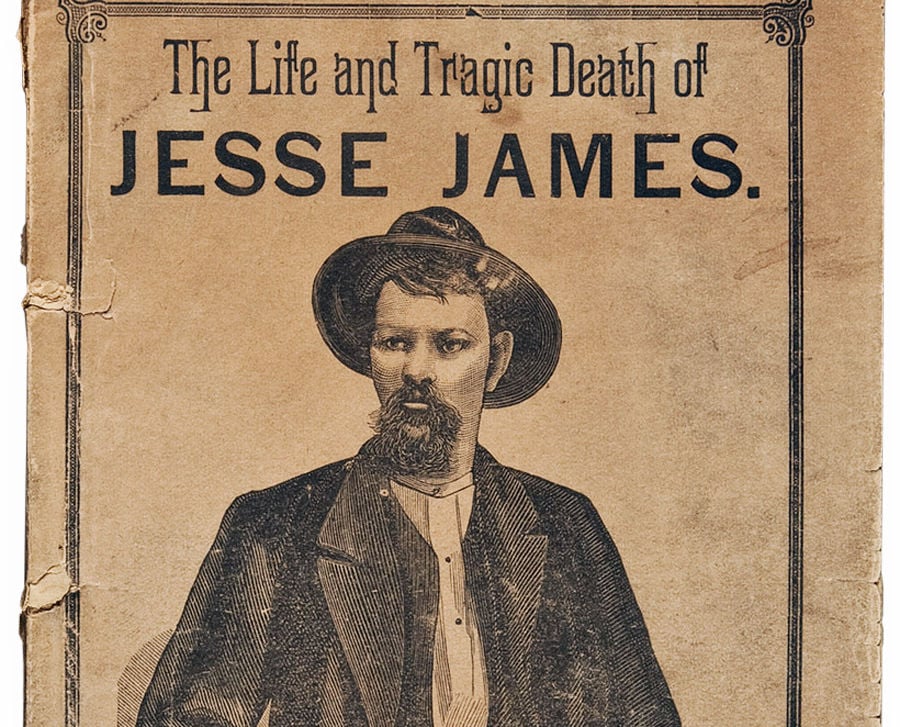 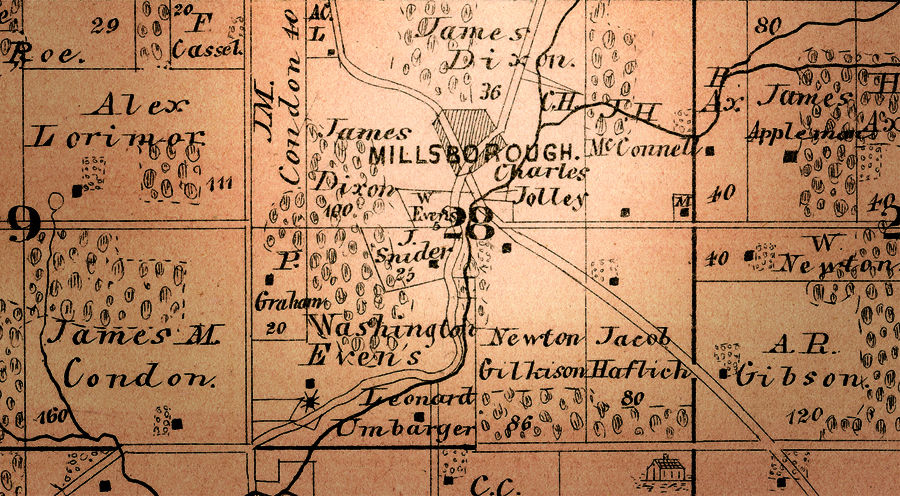 Village of Millsboro from Andreas' Atlas 1873. 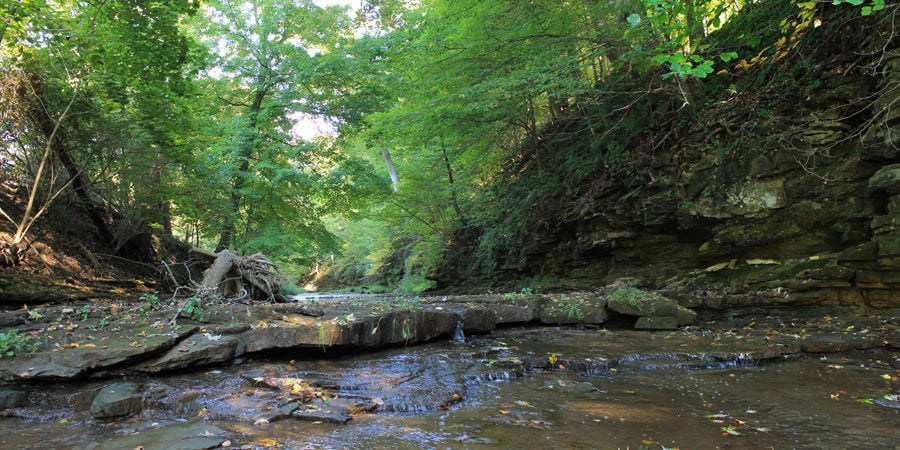 The famous Jesse James cave was located on the Clear Fork River a few hundred yards south of downtown Millsboro. 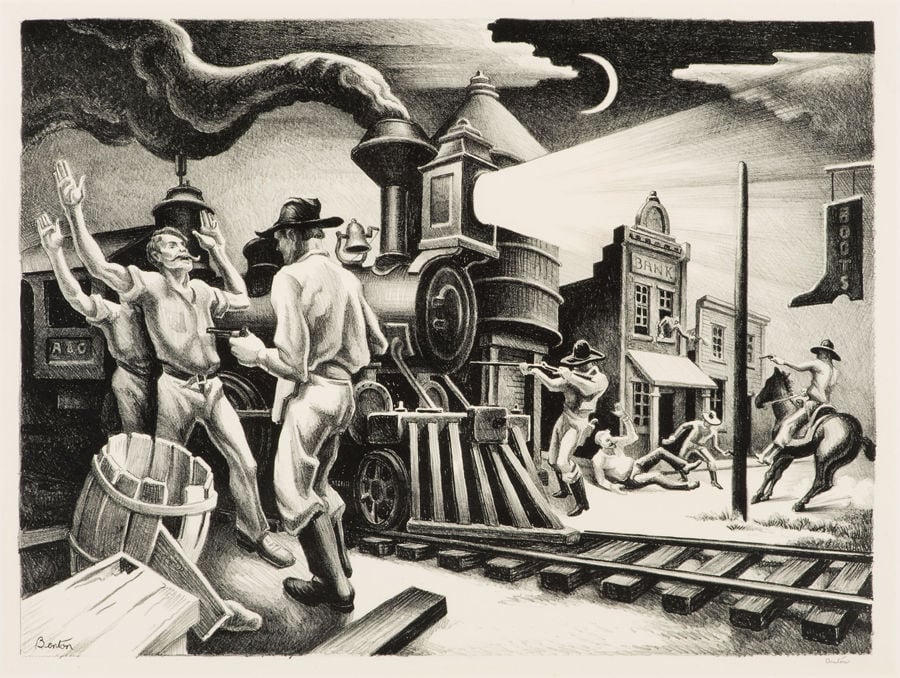 "Jesse James" by Thomas Hart Benton: lithograph study for his mural in the Missouri State capitol. 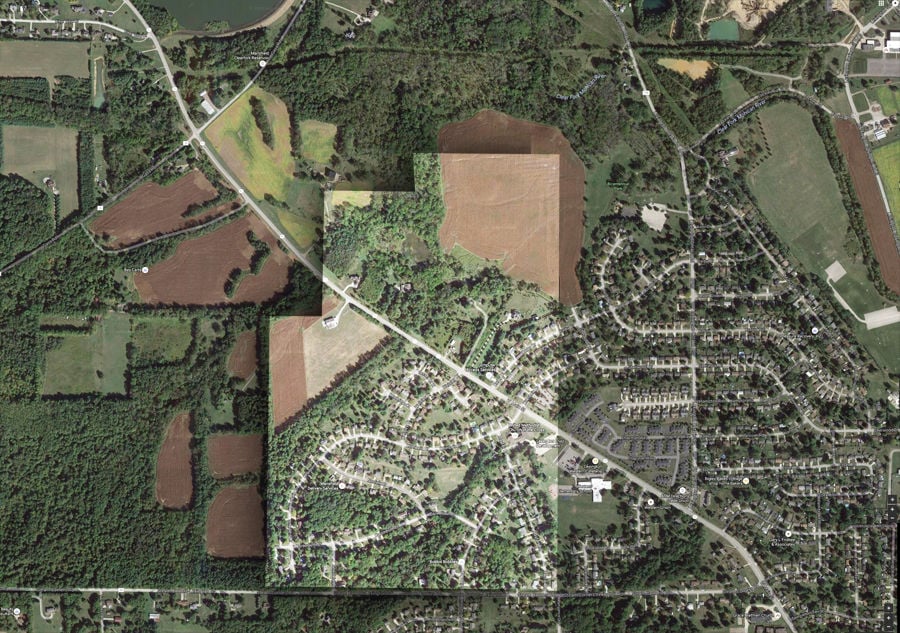 The farm of Capt. Levi Rumsey where the James Gang was reputed to gather was located west of Lexington straddling what is today St. Rt. 97. 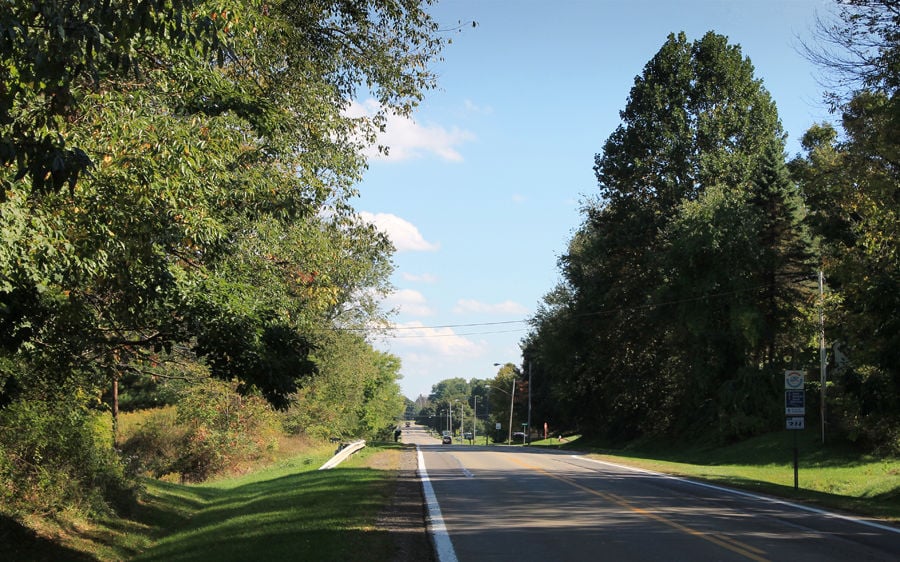 A view into Lexington on State Route 97 where it crosses the old Levi Rumsey farm. 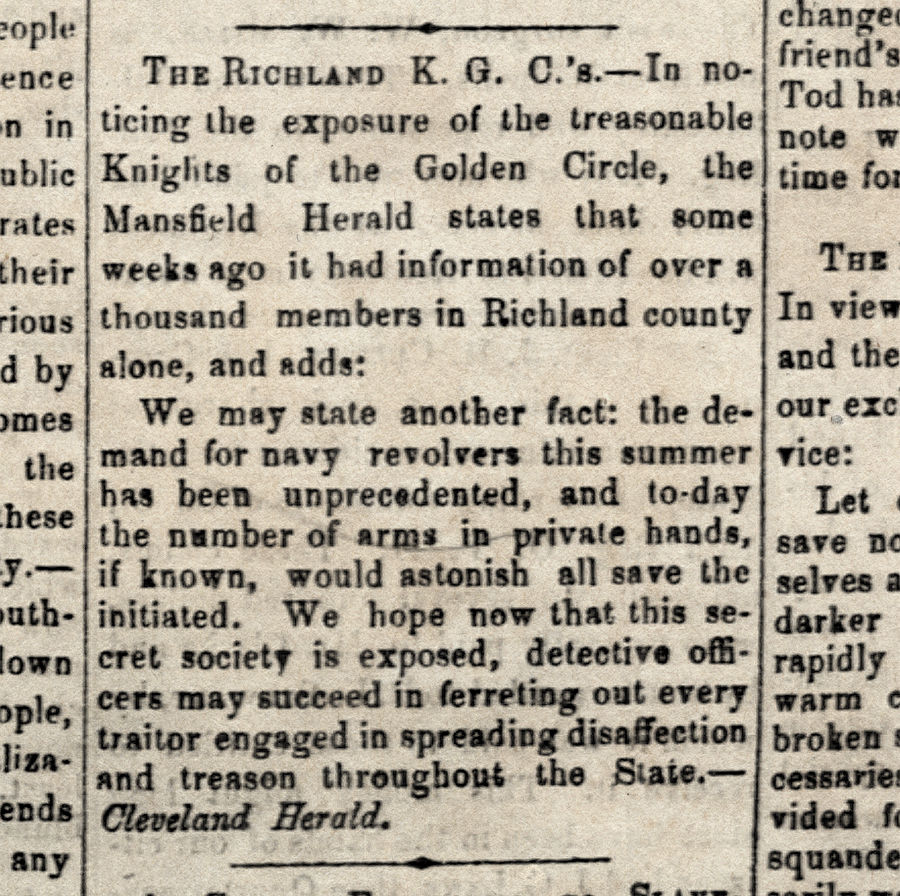 A view of Capt. Rumsey's farm from Bicentennial Park in Lexington.

Richland County has often been a significant crossroad of the nation as an intriguing intersection of American history and culture.

So it is not surprising that many extraordinary characters of US legend have passed through this corridor of the country, and left their footprints in the dust of our particular thoroughfares.

One of the most powerfully legendary characters — recognized around the world as a uniquely American icon — rode his horse into local lore in 1880 so compellingly that his presence left a shadow here for a number of generations afterward. It took a case of dynamite to finally blast that memory out of public imagination

This folk legend was Jesse James, and for more than a half-century rumors of the James Gang invested the hills and valleys between the villages of Lexington and Millsboro with powerful mystery. Perhaps the most compelling mystery of all: hidden gold.

Speaking in terms of regional folklore, the historical accounts of Jesse James are generally associated with an area of the nation considerably farther west of here. The famous train and bank robberies took place in Kansas, Missouri, Minnesota and Colorado.

Yet the James Gang had ties that brought them to Ohio as well, and the James Brothers had a far-ranging mission in life that found a surprisingly virulent foothold in Richland County.

The stories got started in 1880 when a stranger rode into Lexington. His name was Levi Rumsey and everyone called him ‘Captain,’ though no one ever particularly clarified which side of the Civil War he fought for.

He was the kind of man who folks noticed: loud and determined; rich and a little shady. Folks in Lexington were convinced he was a horse thief.

After a cursory scout around the Lexington countryside Rumsey decided he wanted to buy John Graham’s farm just west of town. Graham didn’t want to sell, so he quoted a price to the Captain that was outrageously out of bounds, thinking it would end the discussion.

Instead Rumsey just reached into his pocket and slapped down the asking price in cash gold.

The farm was far enough away from town to keep prying eyes at a distance, but it was situated on the main road west so people were able to notice the traffic in and out of the place.

They saw an extraordinary number of horses — too many to be an honest man’s normal trade. And they saw gangs of men: rough men — hard-eyed men — who seemed furtive in their movements and carried weapons casually.

It was 1880 and everyone had heard of Frank and Jesse James. The headlines followed their exploits and depredations out west for a dozen years, and the James Gang robberies of trains and banks seemed to have only gotten more brazen with each new headline.

Once the rumor got started that Jesse James himself was spotted out at Rumsey’s farm, the whispered gossip overtook the town like a dark cloud that can quickly transform a sunny day into something alarming.

Even during his lifetime Jesse James was something of a folk hero. There were folks in Lexington who were afraid of his presence, yet even so they wanted to shake his hand just so they could tell their grandkids.

It wasn’t long after the Rumsey settlement was established when the news broke in 1882 that Jesse James was dead. And it was shortly after that when Rumsey took off for the west suddenly with all of his wife’s jewelry.

It was all very unsettling to the Lexington townsfolk, so the stories and the talk should have just ended then and there when all the outlaws disappeared.

But the curious thing about legends: they don’t obey any standard ebb and flow of community gossip. They lodge in a different part of the societal imagination where common sense doesn’t apply.

Instead of fading away with the passing months, they only take deeper root and grow like a wild vine.

Rumsey left town and was forgotten, but Jesse James seemed to stay on. He had been only a phantom presence in Lexington to begin with, but as time passed his legend became more and more solid.

Generations after he was gone he was more real than when he left footprints on the dusty road west of Lexington.

How the legend gained traction

No doubt a large part of the fuel that caused the Jesse James memories to burn brighter was the crazy proliferation of books and magazines and dime novels written about him. In the decades from 1880 to 1920 he was a media blockbuster, and stories of his ‘adventures’ used more ink than any other literary character.

After his death it was never clear which shelf his books belonged on: fiction or non-fiction.

The stories always had train robberies, bags of gold, and lots of loot that was stashed somewhere secret.

That’s why the folks around Lexington started eyeballing the land where Captain Levi Rumsey had once hosted the James Gang.

In the public imagination it seemed reasonable to infer that since Jesse James’ life had ended so abruptly, it was possible — perhaps likely — that a hidden cache of gold was unwittingly left behind at Rumsey’s.

But if you walked the Rumsey farm — then or now — you would find there aren’t a lot of notable landmarks where a buried treasure might be referenced by coded map. There were 221 acres straddling the road west out of Lexington that were mostly open and nondescript and, in the 1880s, without trees to serve as markers.

It didn’t take long however, before someone thought to follow the Clear Fork River upstream from Rumsey’s to where the surrounding hills got steep enough to make the valley more privately protected from public scrutiny. And sure enough, there was a cave.

It was in the village of Millsboro, 4.7 miles north of Rumsey’s farm.

With little prodding, folks in Millsboro suddenly remembered having once seen furtive men lurking around the millponds.

And with no further evidence than those flimsy speculations, the Millsboro cavern went under surveillance by every gold digger for 100 miles around.

Folks who lived along the stream in Millsboro near the famous cave put up with the aggravation of wild-eyed trespassers for a surprisingly long time.

The entrance to the cave had gotten smaller and tighter through decades of shifting rock, so by the late 1940s it took some effort to get in there. But the difficulty and the danger seemed only to make the challenge more attractive to gold hunters.

It wasn’t until the 1950s when the cave was finally blasted closed to put an end to curiosity seekers, laying to rest the Jesse James legend.

You can be sure however, that whoever laid the charges did not push the plunger until he had made exhaustive searches and sifted every handful of sand within the hidden recesses of the grotto.

That’s the end of the story, but if this tale has awakened your interest there is a postscript.

By the 1950s it seemed so unlikely that there had ever been any gold to begin with, and you would think that the blasted cave would be the end of the story once and for all.

But history has a most interesting way of doubling back around on itself and reshaping the nature of how it presents old threadbare folklore.

Recent generations of scholars, historians, and descendants of the James brothers are re-writing what we know about the legends of Jesse James.

This is how the new understanding has significance for Richland County:

It turns out that the James Gang was not robbing trains simply just to get rich — they all lived rather humbly in fact. They had a larger motive behind their nefarious gold gathering.

They were amassing a fortune for a specific purpose, and hiding their caches in strategic locations so the resources could be available when it became time to access them.

They were preparing to fund the next time the South rose in rebellion.

All of those James boys, and all of their associates, had taken part in the Civil War, and they all had bitter scars to prove it.

Jesse James membered himself among a vast secret network of Southern sympathizers who sought to undermine the Union cause. During the war they comprised a belligerent underground, running interference to hamper the Union Army, and after the war they did everything they could to facilitate a second rising of the Confederacy.

This secret organization was known at the time as the Knights of the Golden Circle.

They knew that an actual political revolution would require much more than noble sentiment, it would take a terrific financial foundation.

It is estimated that between Jesse James and his compatriot criminals, the KGC absconded with over $400 million …. more than a billion dollars by today’s numbers.

To all accounts it would seem as if this Southern scheming has little to do with us here locally in the North, except for one little-remembered fact: Richland County was once a hotbed of KGC.

It hasn’t been much mentioned in the last 100 years, but it is well documented from many sources that a significant segment of Richland’s voters actively supported the Southern cause. Once the North won the war all of these sentiments were considered treasonous, so they weren’t much mentioned again in any way that would attract attention.

So what bearing would this have on the Jesse James legacy?

Possibly nothing at all, except for one tantalizing little clue left for us from the 1880s by the Richland Shield & Banner.

The Shield & Banner was the propaganda sheet for the Democratic Party — which was at that time pro-Confederacy.

The newspaper publicly listed Levi Rumsey among its happy subscribers, and in one little clipping it provided the key to his James bothers connection: they referred to Rumsey’s house as “his castle.”

Rumsey’s home, purchased from John Graham, was a very plain frame farmhouse, and was nothing that could be construed as a castle.

But to a member of the Knights of the Golden Circle the word “castle” was a calculated code word. It was used to indicate a clandestine rendezvous place, or a KGC safe house.

In documentation of the James Gang there were quite a few home sites, livery stables, and hideout locations that were all referred to in their letters as “castles.”

So was it actually possible that Jesse James spent time in Richland County?

New evidence only increases the likelihood that rumors are true that the James Gang once used Richland County as some kind of a rendezvous.