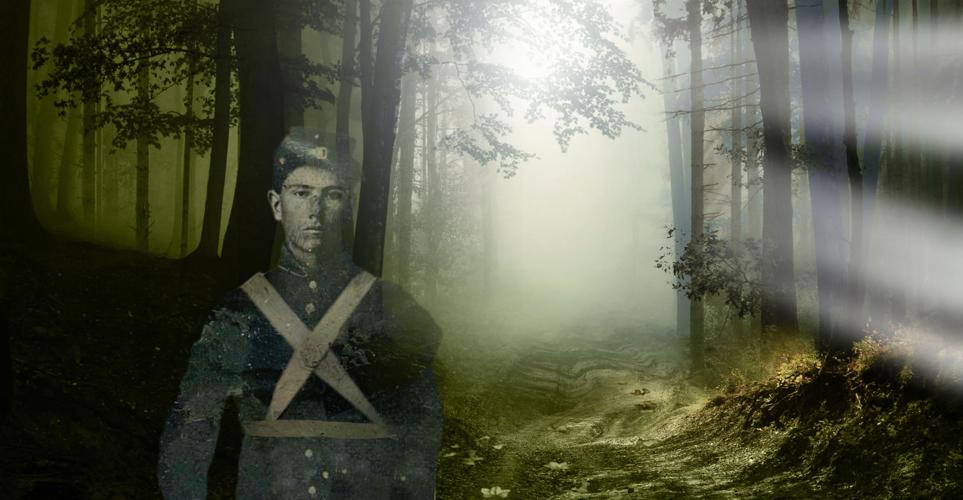 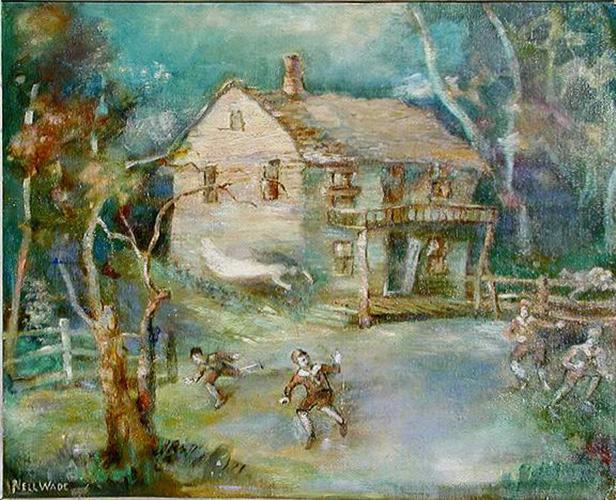 This painting of Wildcat Hollow by Nell Wade depicts the ghost of Headless Kate as she frightens neighborhood kids.  Nell was a descendant of Cy Gatton, and she once lived in Wildcat Hollow. 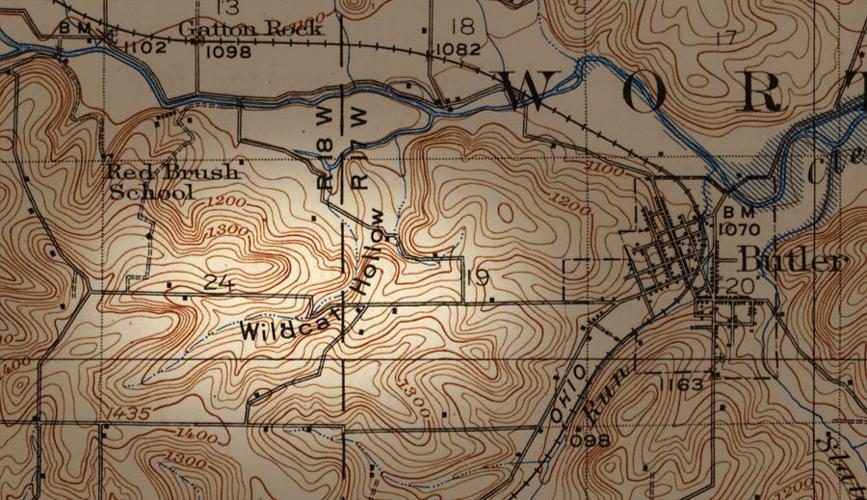 This USGS topographical map shows that the ravine east of Butler was known as Wildcat Hollow as early as 1915. 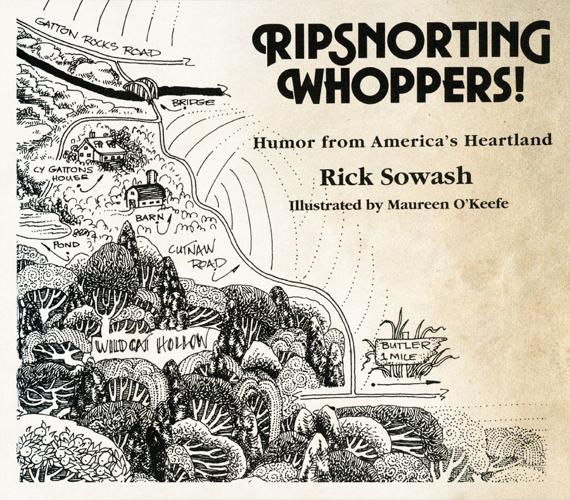 This map of Wildcat Hollow illustrates a collection of Cy Gatton's stories in a book by Rick Sowash from 1994. 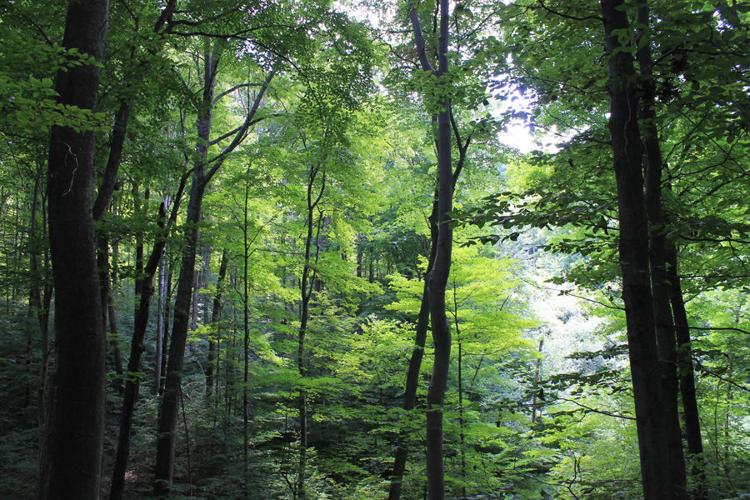 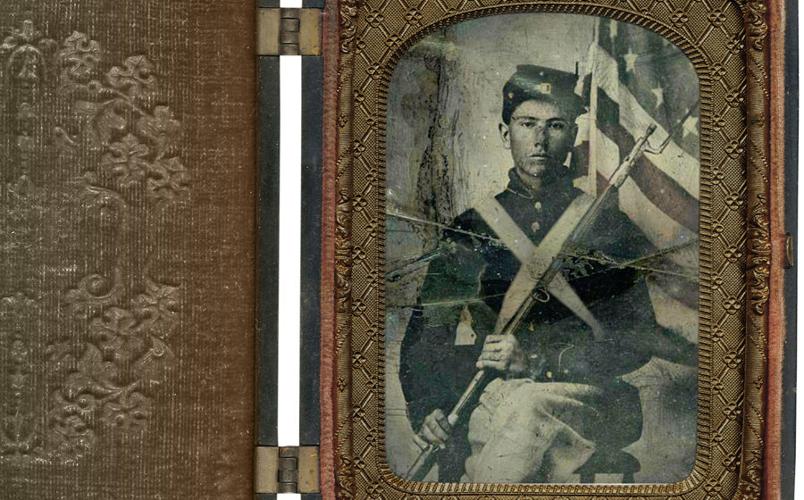 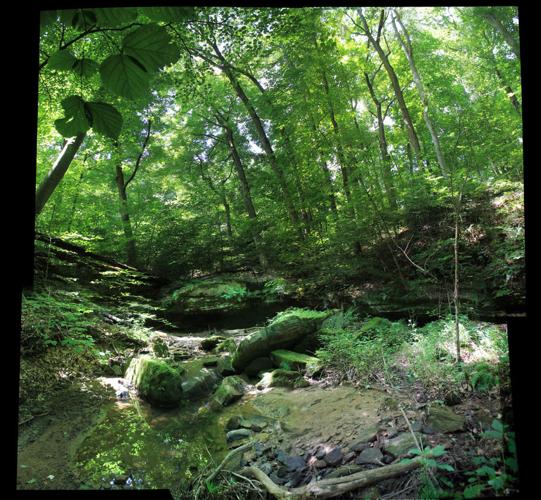 In the creek bed of the Wildcat Hollow ravine. 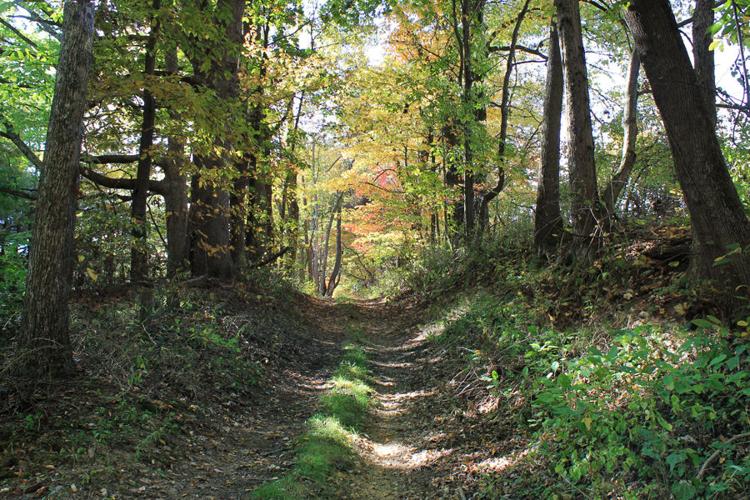 Deeply worn into the earth, the abandoned road through Wildcat Hollow was once a main thoroughfare between Bellville and Butler.

Years ago I had a friend who was a Scoutmaster, and every year he took his Scouts on a camping trip to Wildcat Hollow.

This one particular year in the 1970s they went on the last weekend of October, and he asked me to help him make it a haunted campout. None of his scouts knew me, or had ever seen me before, so I was supposed to be the ghost.

There was a traditional ghost story already associated with Wildcat Hollow that was a standard program for campfires there. Unfortunately no one believed it.

The tale had originated from an old storyteller who lived nearby named Cy Gatton, and Cy was a famous liar.

He told whoppers and tall tales, and had a wide reputation as a terrific campfire entertainer. But Cy was essentially a humorist, and consequently his ghost story about Headless Kate searching for her lost head took on elements of comedy that made the effect not particularly eerie, or necessarily convincing.

We knew if the scout campfire haunting was to have any serious chills to it, the story would have to be modified to take on a deeper, more tragic angle.

So the two of us, my friend the Scoutmaster and I, went out to Wildcat Hollow to scout out the geographical possibilities of arranging a hauntable campfire, and to brainstorm the logistics of sneaking around in the dark.

That was when we heard the true story of Wildcat Hollow’s mysterious spirit.

If you had ever been to Wildcat Hollow in those days you would know that the ravine had an old abandoned road passing through. At that time, in the1970s, the thoroughfare had not been used by traffic of any kind in a couple generations, so it made an ideal hiking trail into the steep forested campsite.

One entrance to the abandoned lane was found at a dead end on Cutnaw Road; the other end came out at a beautiful apple orchard.

There were two old men who tended the orchard — they were brothers whose huge, weathered barn looked to have been collecting apples for well over 100 years.

We stood there in the shadow of the barn to talk with one of the Oberlander brothers. We told him we were interested in a ghost story for the Scouts, and asked what he knew about Headless Kate.

He didn’t hesitate to tell us right off that Headless Kate was a character from fiction and had no substance in reality.

The boy, on the other hand, was quite real.

He said it like an encyclopedia fact that was common knowledge and undisputedly so.

It happened many years ago in the 1860s when the road through Wildcat Hollow was a well-trodden highway: a main road between Bellville and Butler.

There was a family who lived along the road on the edge of the ravine, not far from the waterfall.

The father had been killed when a wagon overturned, and the mother was left with five sons, whose ages spanned from six to 16.

The oldest boy was Jacob, and when the Civil War presented opportunities for adventure, he was so eager to fight that he lied about his age in order to enlist in the 102nd Ohio Volunteer Infantry at Bellville.

His mother was, needless to say, heartbroken when Jake said he was leaving, and she used every apron string she had to try binding him to the farm. The boy was determined to leave though, and he even traded his sheep for new shoes in which to march away.

He kept only one of those promises.

Jacob was killed four years later in the middle of the Mississippi River when a steamship exploded. He didn’t make it home; his body was never found.

Old Mr. Oberlander was quite certain the boy had fulfilled his promise to return to Wildcat Hollow however. He had seen it himself.

The first time he saw the apparition Mr. Oberlander thought it was a hunter stalking down the abandoned road, except the man was wearing blue, which was very unusual for someone in camouflage.

When he looked more closely he saw the stranger had a big white X across his chest … like he had been crossed out. It was easy to distinguish in the gloaming.

That was when he remembered the admonition he had once received regarding this road.

When Mr. Oberlander bought the orchard many years before, the previous owner had earnestly tried to explain to him that not all trespassers on the road were of this world.

“I didn’t believe it then,” he grinned.

He had witnessed the boy’s weary homeward hike at least three times through the years. It was always at dusk; it was always on the same stretch of road at the edge of the ravine, not far from the waterfall.

“Not many people know about this,” he added, “because not many people are on that road anymore. The folks who remembered Jacob and his mother all passed away decades ago.

“And you have to be very quiet if you want to see him. Not many people are that quiet these days.”

When we left Mr. Oberlander it took us about two minutes till we had a plan.

My friend the Scoutmaster would get a blue Union Army costume of a Private for me to wear, with the distinctive crossed white straps across the chest.

I would stagger through the ravine just before dark, and he would have the Scouts positioned somewhere near enough to the road where they could see me, but not so close that they could speak to me.

Then later that night he would tell the tale around the campfire, and the boys would slowly realize that they had seen a real ghost!

Perfect is as perfect does however, and that trickster Fate often has a way of toying with perfection.

It was the Saturday afternoon of the campout; the weather was ideal; there would be a bright moon that night to cast a quintessentially Halloweenish glow over Wildcat Hollow.

I put on my Civil War uniform, and I strapped on the bright white canvas target across my chest.

I took a little white stage makeup to add ghastly pallor to my face. By the time I was ready to leave for Wildcat Hollow I was the most perfectly grim character you could ever hope to encounter.

That was when my car died. It was just an old hand-me-down junker, little more than a ghost itself.

No matter what I tried it wouldn’t come to life. So I sat in the front seat and watched the sun set as my heart sank lower and lower.

The next day I had to wait until afternoon to call my friend the Scoutmaster and apologize.

Before I could even start my excuses he loudly congratulated me over the phone.

“You were terrific!” he exclaimed, “and it worked absolutely perfectly!”

I was so stunned I didn’t know what to say.

He said the Scouts were curious when they saw me walk past the waterfall, and they made small comments about the Civil War uniform like I was someone who got lost on the way to a costume party.

He said that later that night when he told the story of Jacob he got to watch their eyes in the firelight as each of them slowly grasped the significance of what they had seen earlier.

And afterward, interestingly enough, it wasn’t an eerie fear they embraced at all — it was quite the reverse experience. The young men, instead of cringing at death, had an animated discussion about what happens when we die. It was the exact opposite of fear, like some kind of bright shining hope.

“It was unbelievable,” he said with a husky voice. “I can’t thank you enough.”

Honestly, I was in such shock I hardly said anything. And then later it was too late to try backpedaling.

I imagine it may have been significant if I had explained to my friend the Scoutmaster that it was not me who he saw in Wildcat Hollow. But it could not have been anymore meaningful to him.

So I never said anything about it. To anyone. Till now.

I still go out to Wildcat Hollow sometimes, and wander down to the waterfall by myself. I guess I hope I’ll get to see Jacob myself some evening.

But it is possible that he accomplished whatever it is that spirits come here to do, when he challenged the fears of those young boys on their campout.

And maybe now he has gone home.

This story cannot be told without a debt of gratitude to Gene & Gloria Yarger who always welcomed me to the valley; and David who often brought the dogs to stroll with me down into the Hollow.