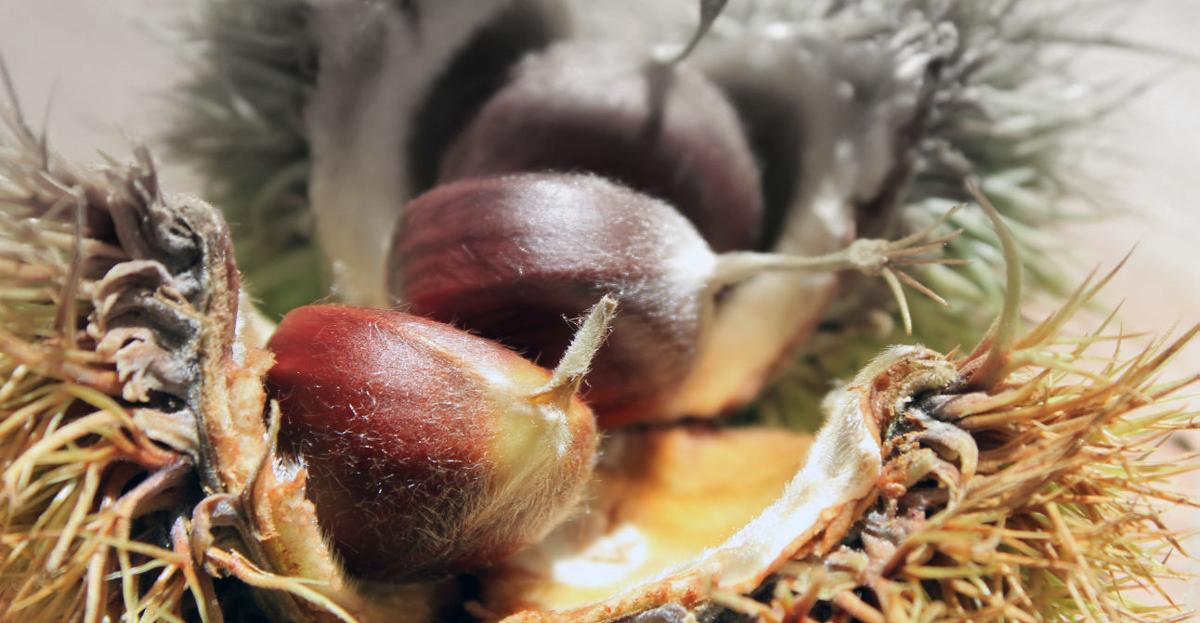 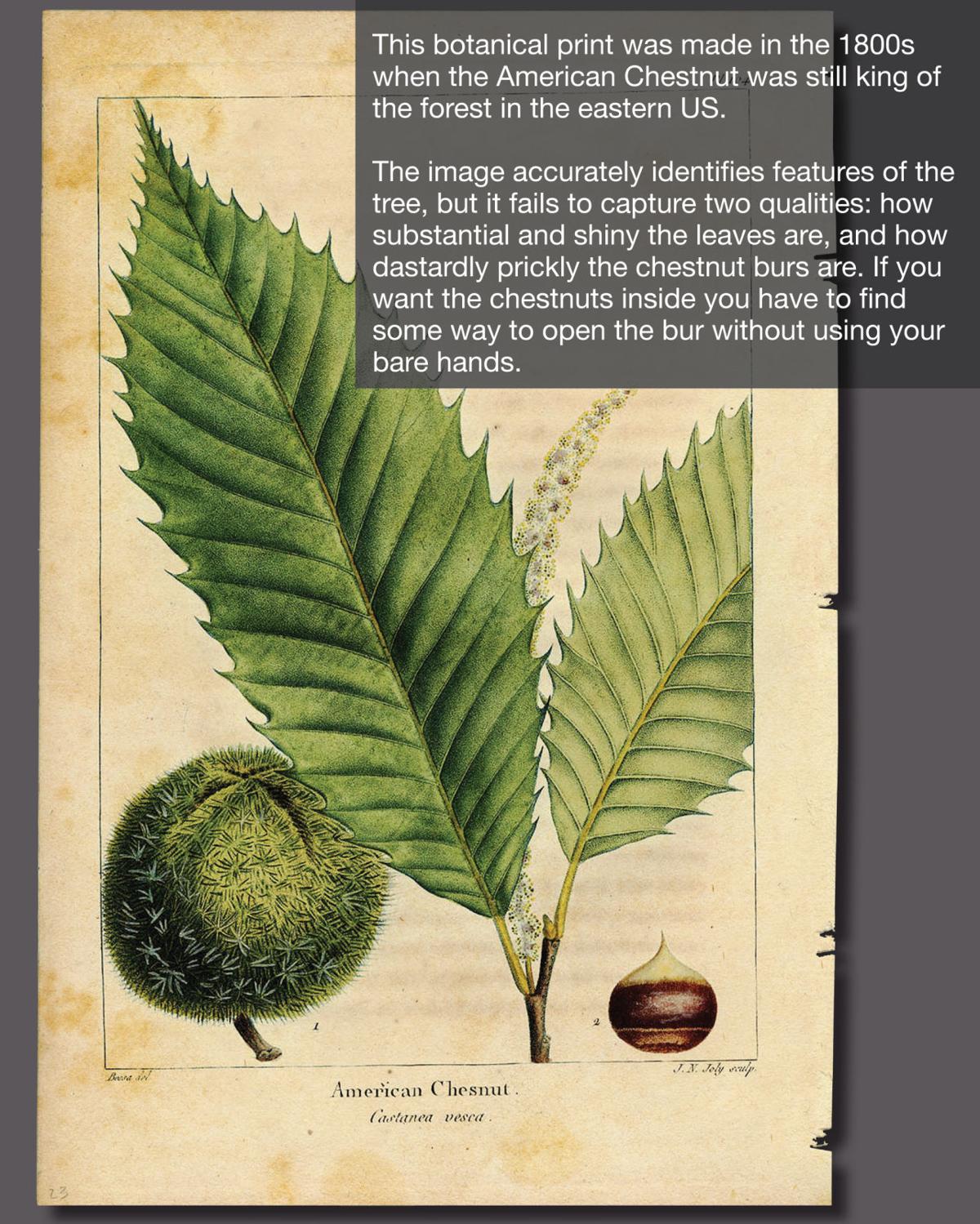 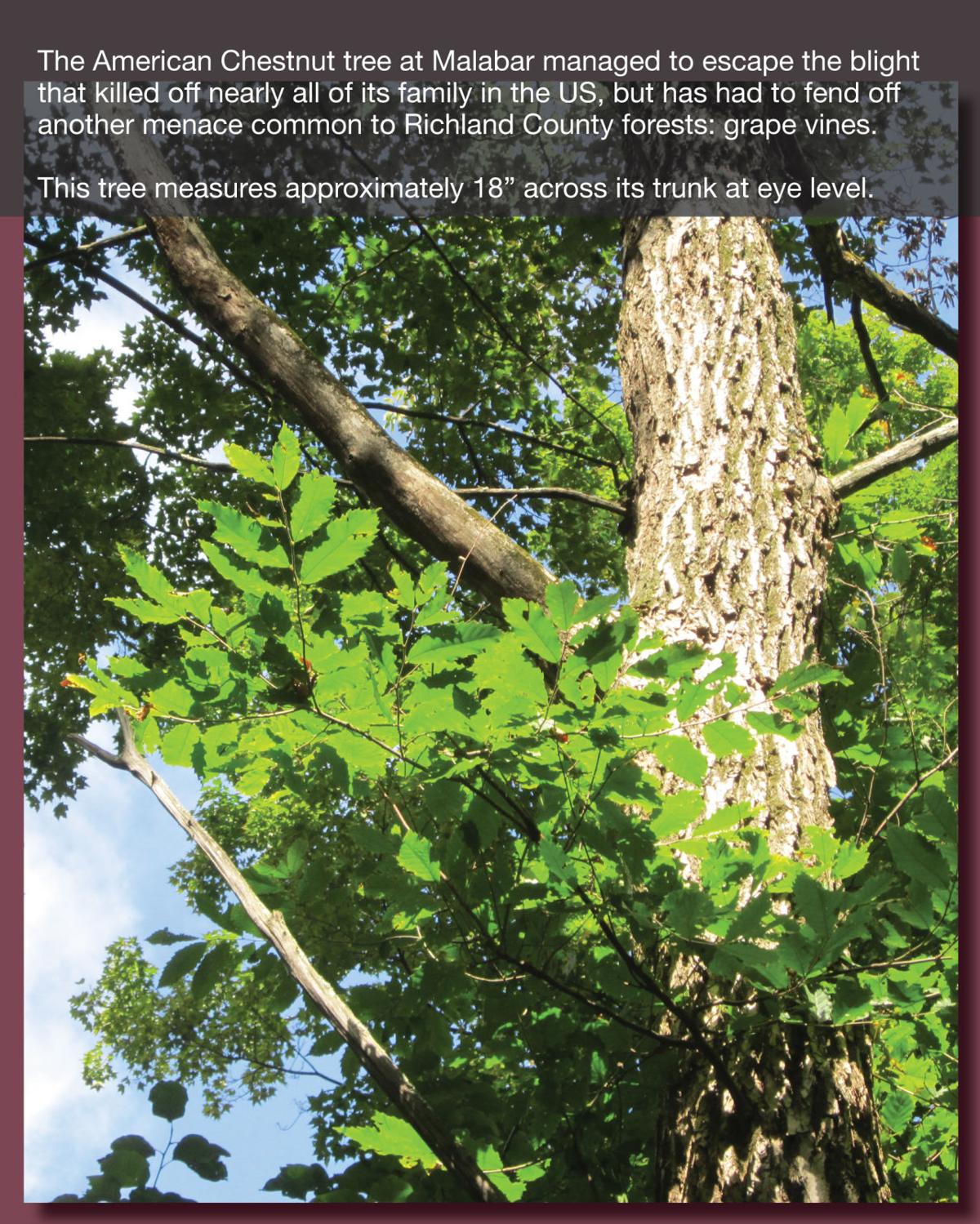 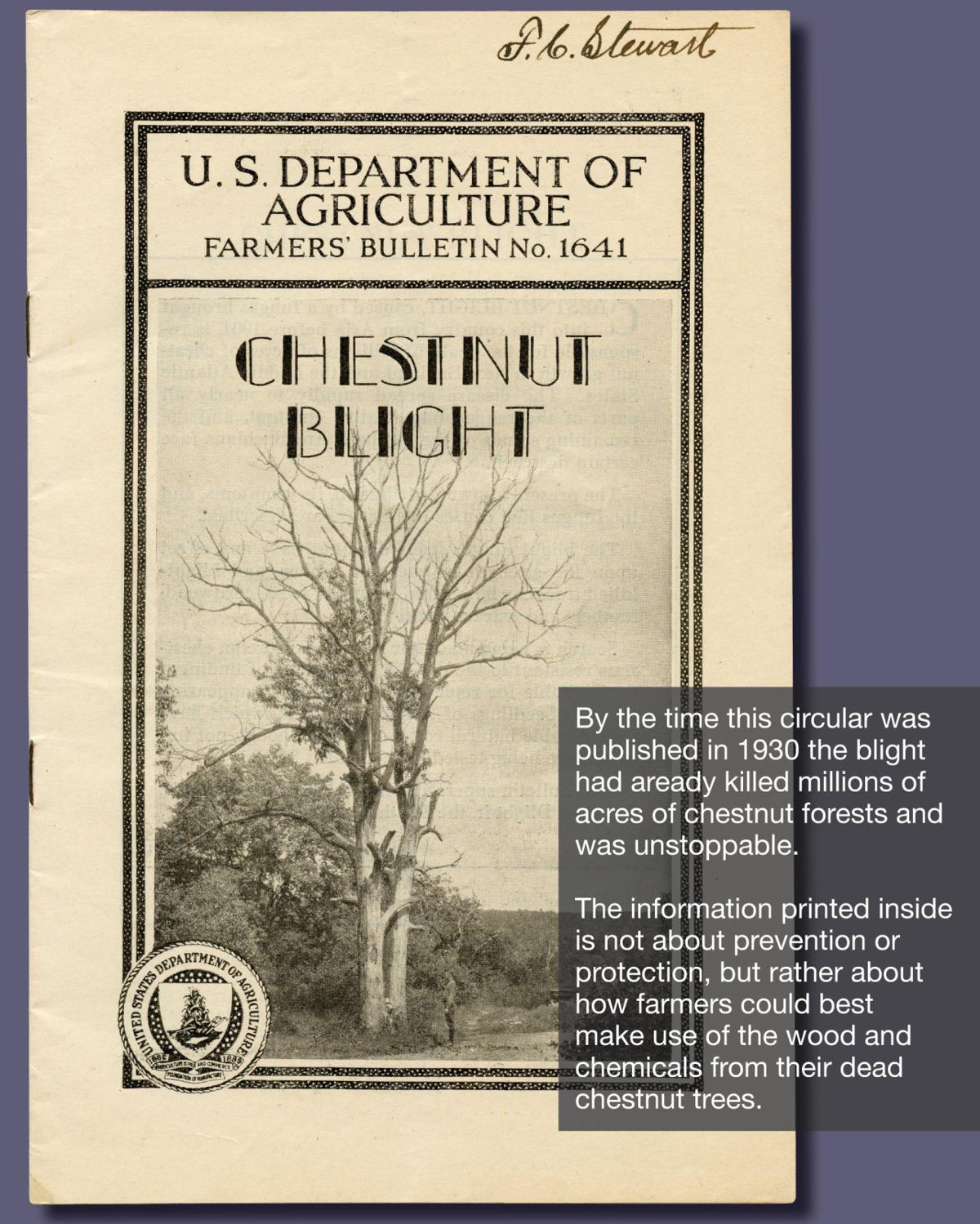 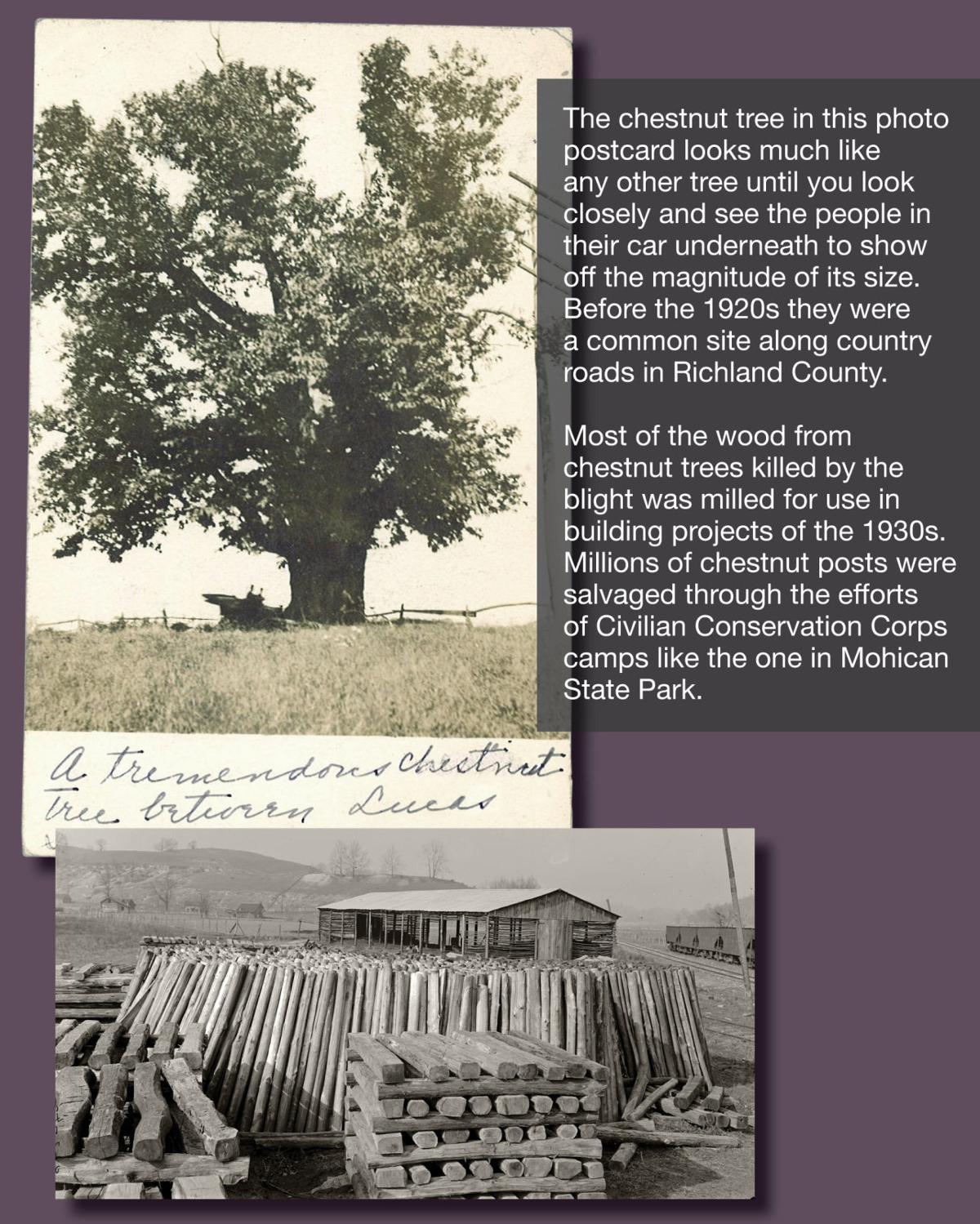 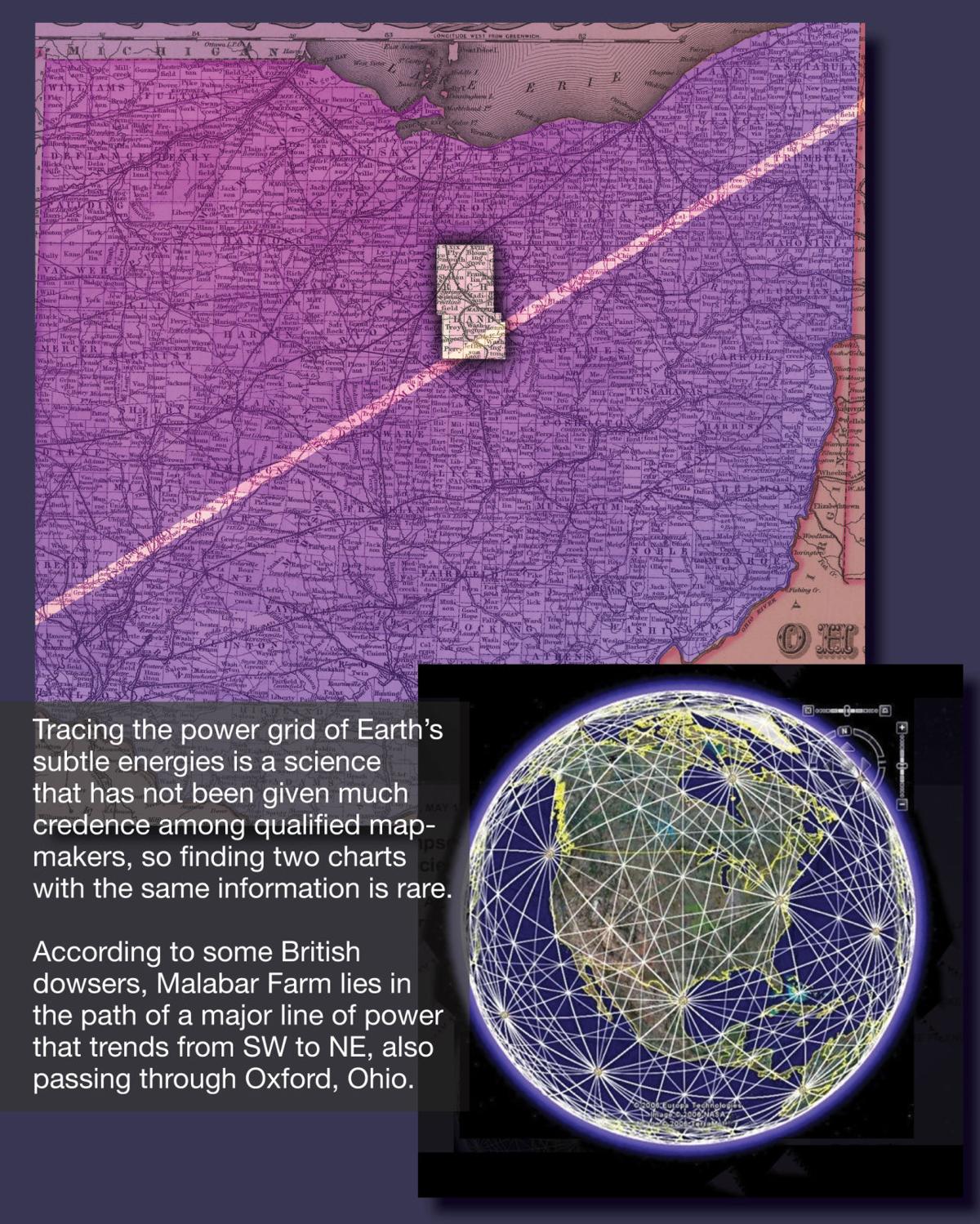 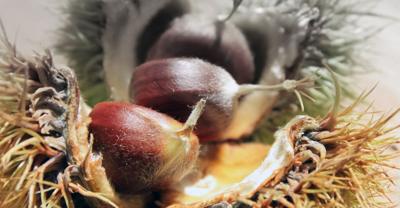 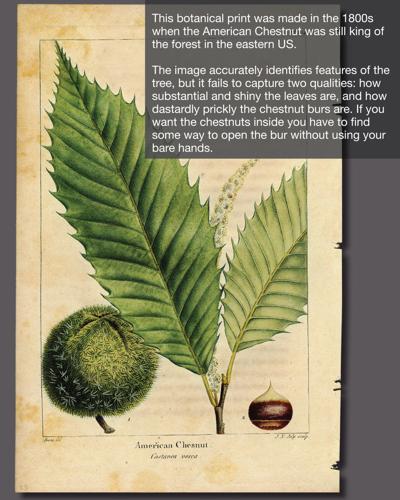 If you have ever taken a walk in the woods at Malabar Farm State Park, you already know there is a kind of magic and natural restorative charm under the high canopy of beech-oak forest.

What you may not know is that along with the sassafras, buckeye, walnut and other typical trees of Richland County climax growth woods you are walking in the shadow of a very rare native whose presence in the woods is something of a miracle and a mystery.

The miracle is simple enough: this is an American Chestnut tree, and in the 1920s-40s virtually all of them in the U.S. were wiped out by the great chestnut blight. The mystery has to do with the findings of a group of English geomancers whose explorations in the woods at Malabar uncovered the presence of energy lines from the Earth’s invisible power grid.

Is there a correlation between the miracle and the mystery? Here are the clues — you can decide for yourself.

These trees were once so plentiful that they comprised as much as 25 percent of the trees in the forests of the eastern United States. Considered the ‘perfect tree,’ they had useful timber, useful chemical extracts, useful medicinal remedial properties, and nuts that were tasty to people and excellent forage for animals.

They grew tall and beautiful in any landscape, and were without question in the1800s the most recognized and quintessentially American tree.

That is why it was such a national catastrophe in the first decades of the 20th century when they all got the chestnut blight and died. Every woodlot and forest you might see — large and small — had loads of tall gray dead snags. That is why you’ll find — if you look closely — that so many of the wooden structures built in the 1930s are all made of chestnut wood.  All of those hundreds of thousands of short posts lining the roads and highways of Ohio were chestnut wood — remnants of our once-mighty stand of native trees.

The blight was first discovered in New York in 1904 and the infection spread rapidly from the East Coast toward the west and the south. The first trees in Richland County to fall prey to the fungal predator died in the 1920s, and by the end of the 1940s they were all gone and never seen again.

Yet there is a live American Chestnut tree at Malabar Farm … so, just exactly how amazing is that?

The number of trees the chestnut blight destroyed is estimated to be between 3 and 4 billion. Surveys done in the 1960s found only a few hundred survivors in the entire United States.

For a number of years there were young chestnuts sprouting up from the roots of the killed trees, but they never lived long before the blight hit them again.

In recent years, botanical science has successfully created hybrid chestnuts crossed from the genetic materials of various hardy strains that may possibly create a new generation of re-forestation, so there are young ones in the ground today. But to find an old original chestnut tree that dates to the blight era is very, very rare.

In the 1990s, I worked for a while at Malabar Farm as a Naturalist, and because I had a uniform and wore the Smokey Hat I was privileged to become one of the few initiates who were led to the secret spot in the woods where the chestnut tree lived.

I was escorted to the site in much the same manner as a pilgrim might approach a sacred shrine — with a quiet that may have been reverence for the Great Mystery — because visiting the survivor chestnut is like standing in the presence of the living past and defying the force of history.

In the deep woods, when the breezes hush, it is as if nature is holding her breath so you can peek through the veil; and even if it’s merely an illusion for a moment, it can be a soul-expanding experience.

I made mental notes at that time of the surroundings so that I could find it again.

It was about a month later when I encountered a small group of visitors at the Farm who had traveled to America from England for the specific purpose of mapping across the U.S. a series of mystical “lines of power.”

Known in England as ‘Ley Lines,’ these etheric paths are said to channel unseen subtle energies of the planet in a geometric grid across the landscape, much the same as the lines of energy in the human body that are said to be accessed through acupuncture.

This energy grid on the surface of the Earth is discernable only with the use of extremely subtle sensors, and the most common method of locating the paths is through the use of divining rods, or dowsing.

It took a little coaxing to get them to talk about it — it was obvious they were not used to being taken seriously — but after some conversation they revealed to me that they had come specifically to Malabar because of reports that the energies were particularly vital and easy to pick up at this point on the US grid.

When I asked if they found their grid line they explained that they had detected not one, but two grid lines, that actually converged and crossed on the grounds at Malabar.

I asked them if they would be willing to show me exactly where the lines ran through the Farm, and they said the easiest way to point out the lines would be to go to the place where they cross … so that’s where we walked.

When the small group of us were standing together right on the axis of the forces where they detected the energy lines converging, I looked around and found myself in the same sacred spot where I had stood a month before, 6 feet from the American Chestnut tree.

Has the tree survived because it is standing at a curious crossroads of life forces that are still, as yet, off our grid of understanding?