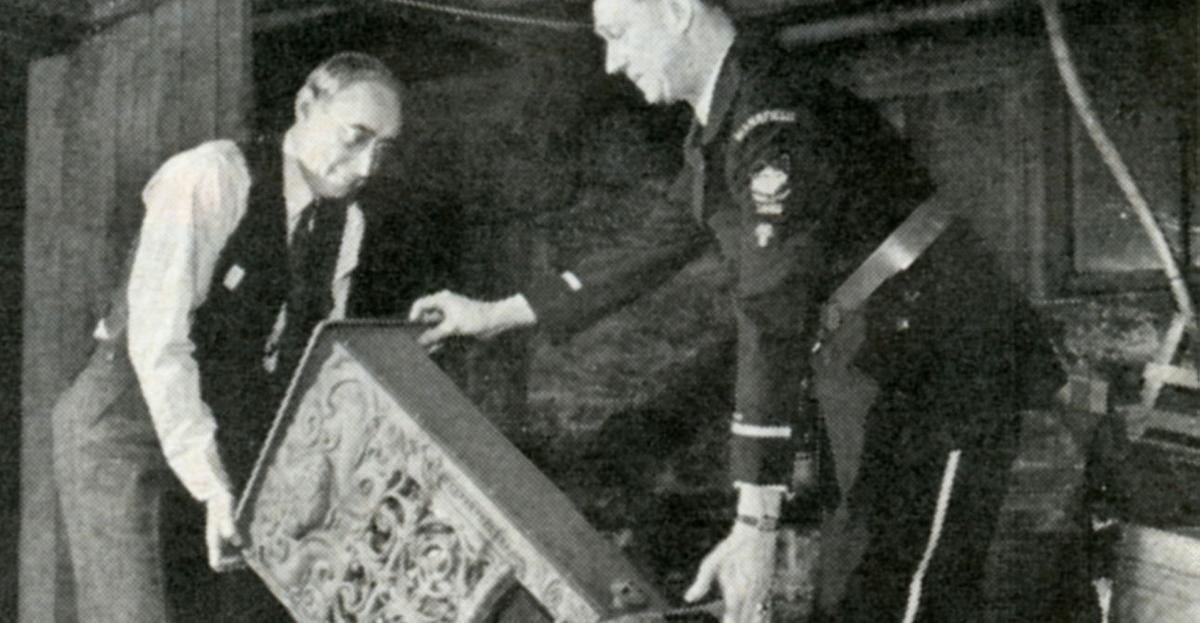 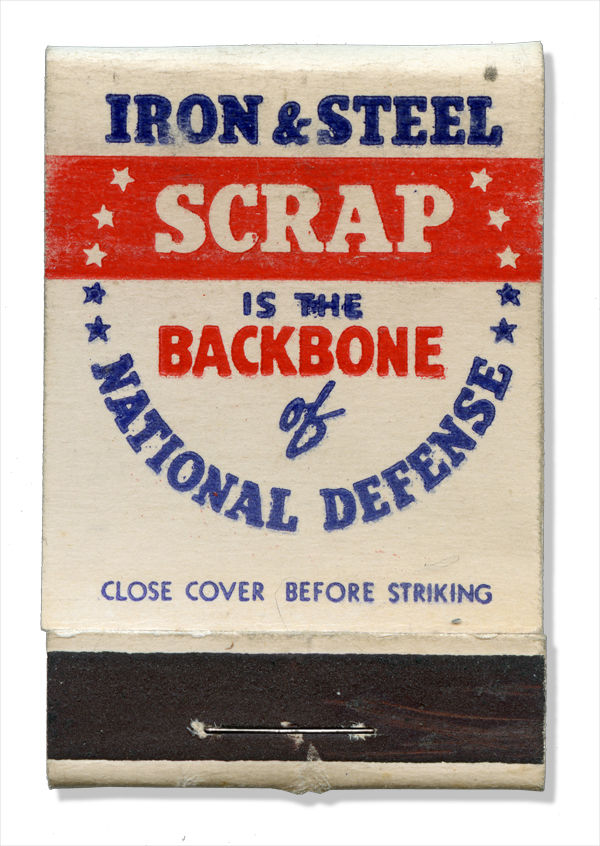 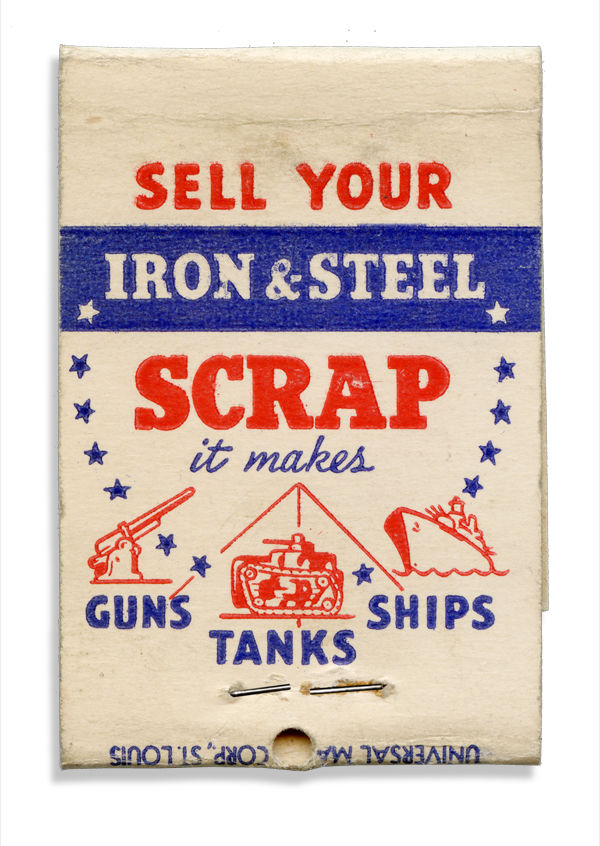 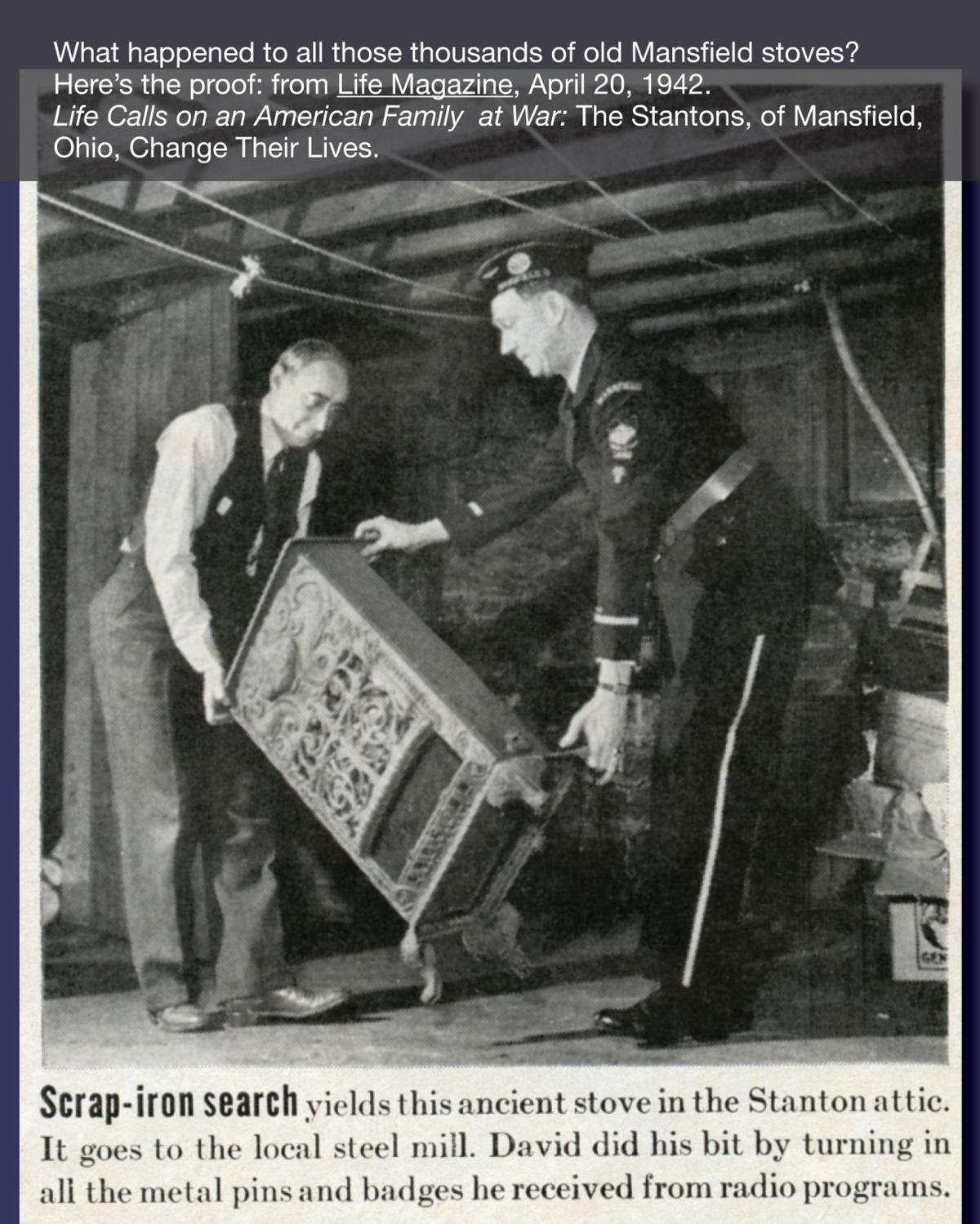 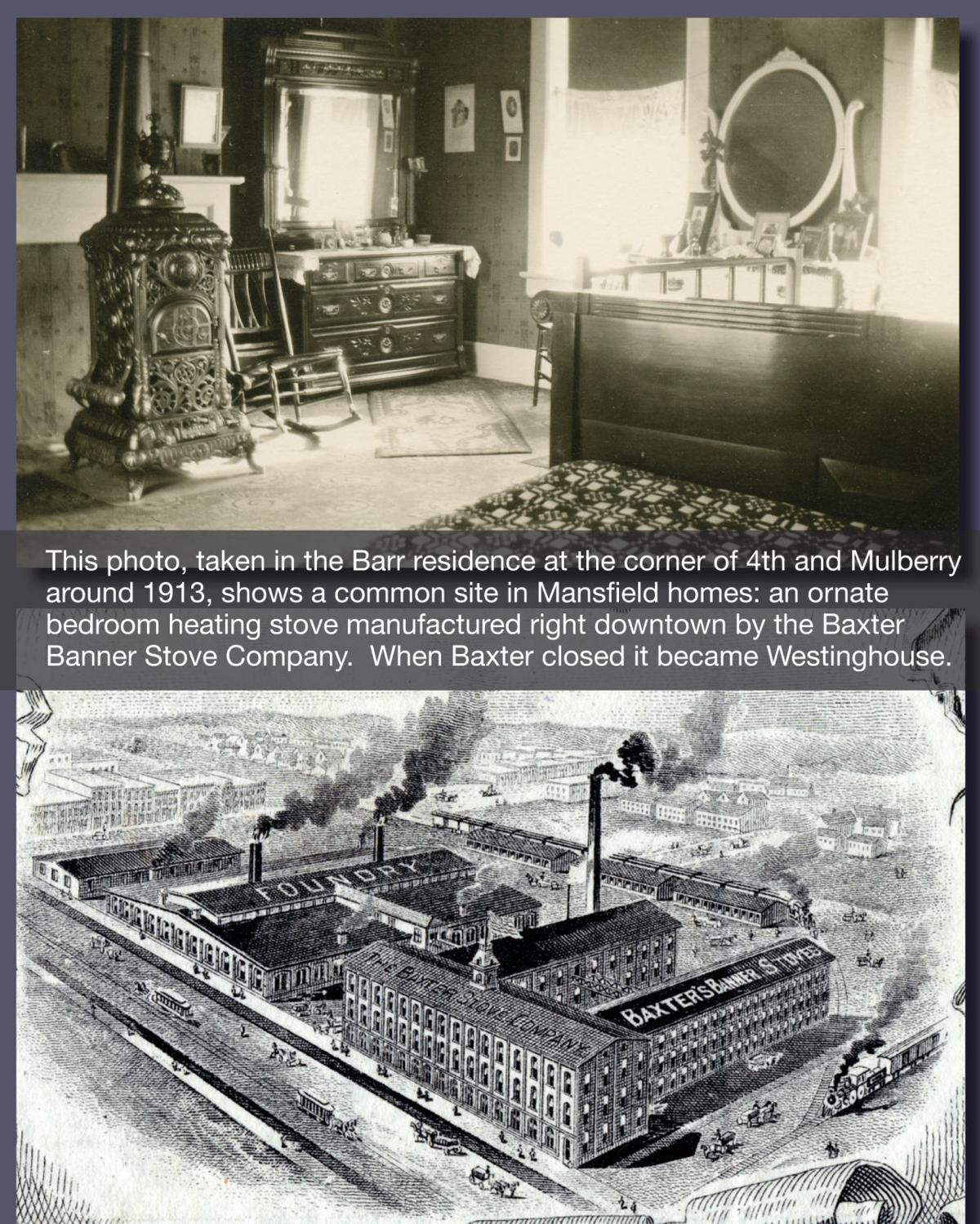 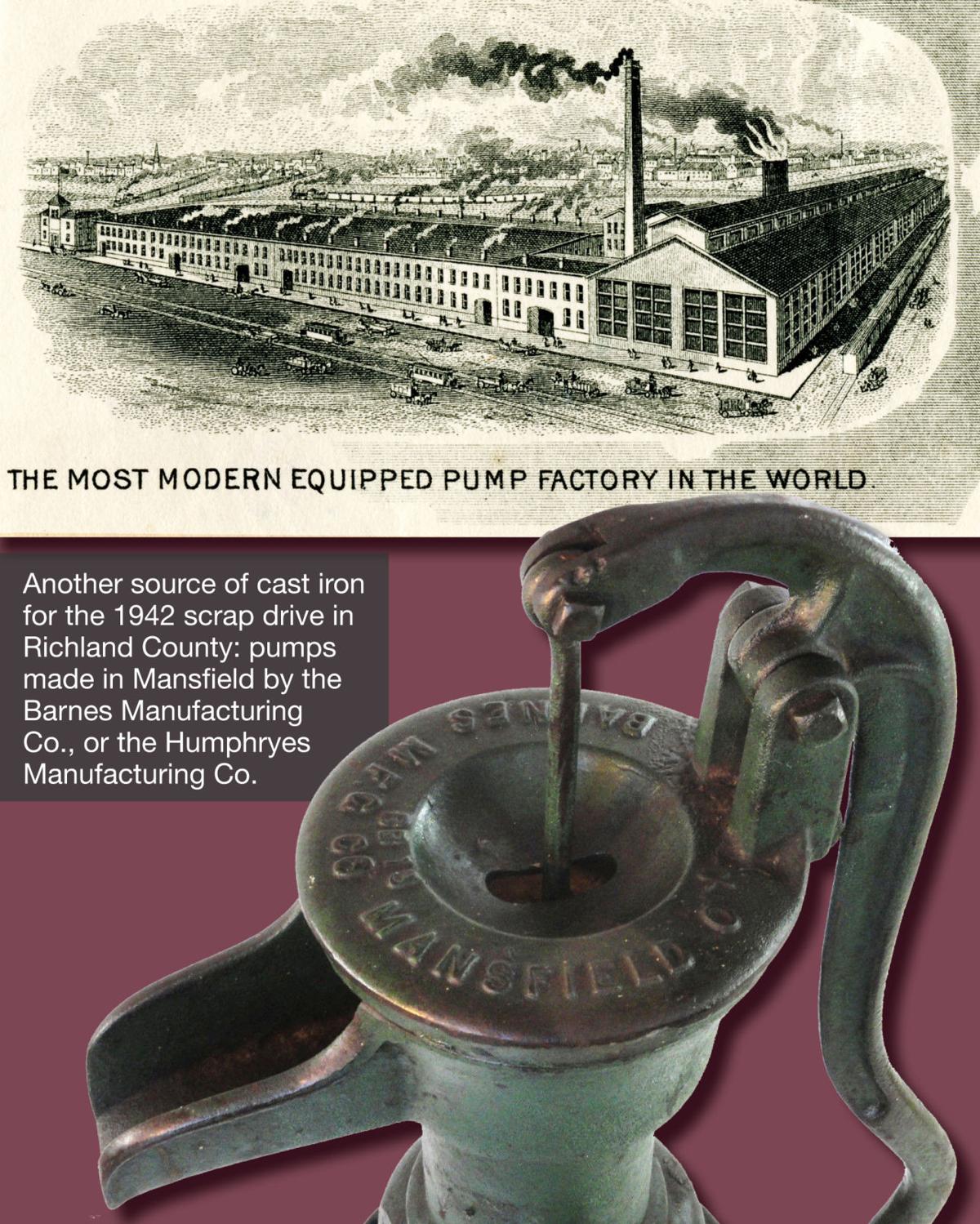 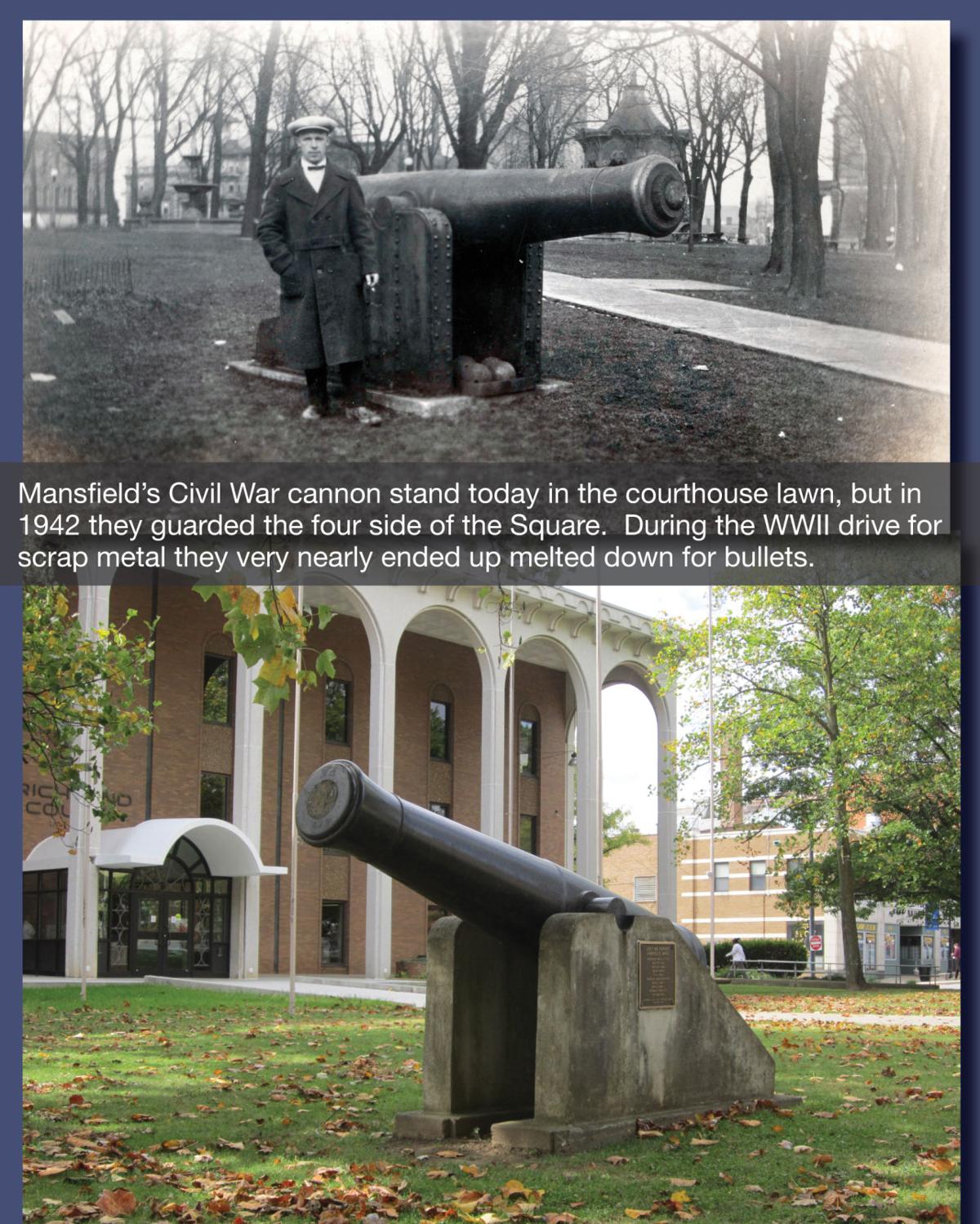 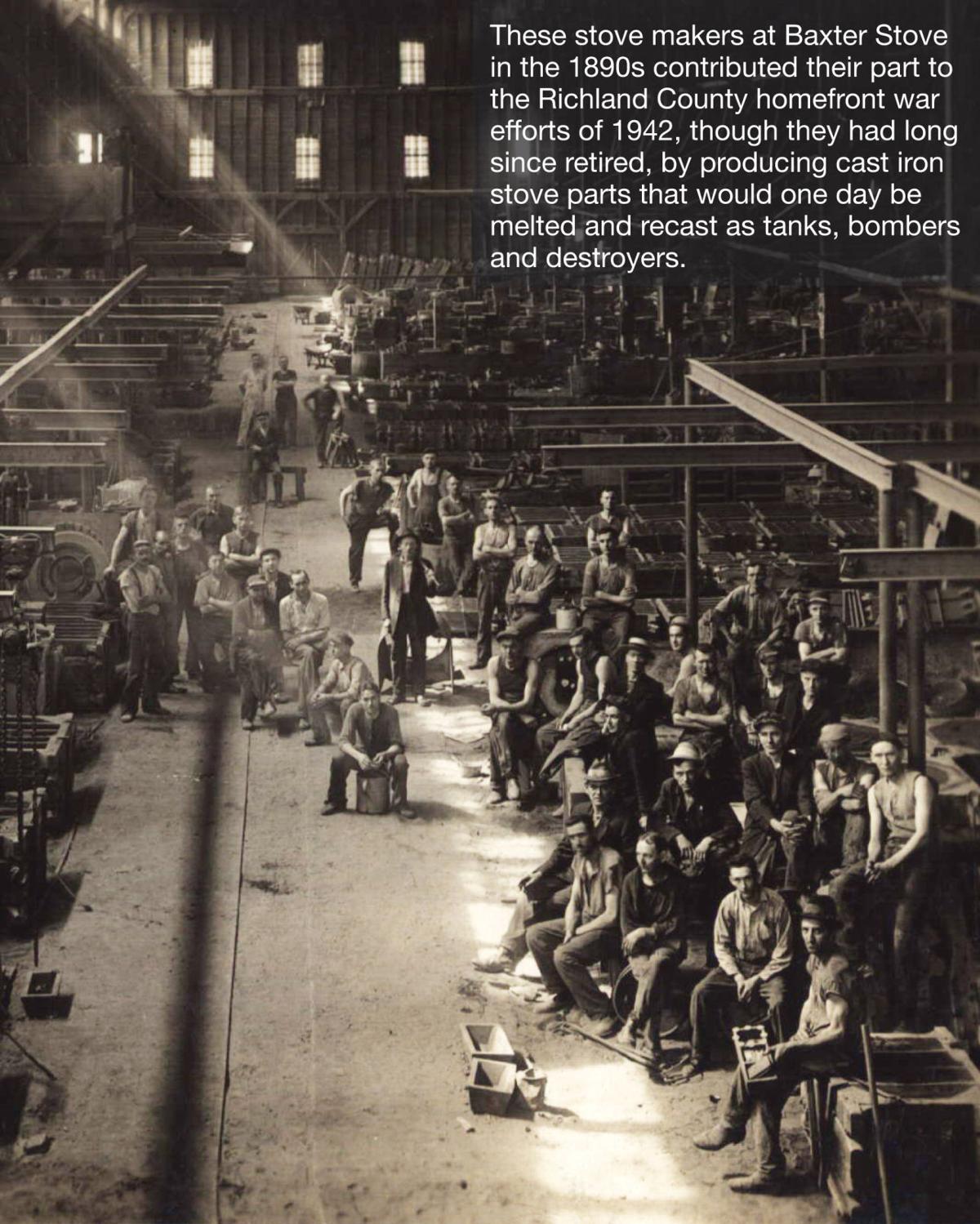 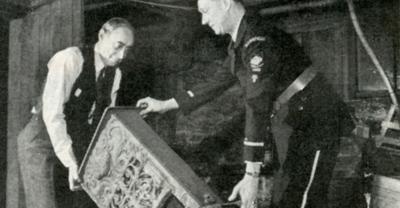 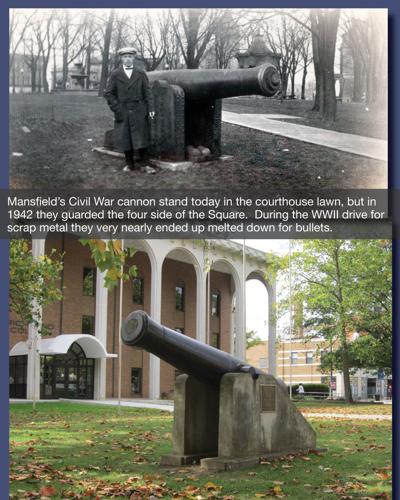 The United States was plunged into World War II on Dec. 7, 1941 when the Japanese bombed Pearl Harbor.

By January of 1942, Richland County was already fully mobilized to engage in the homefront war effort.

The primary first step was a concerted effort to gather resources for building war machinery, and the principle focus was on iron that could be melted down and repurposed toward weaponry.

By Thanksgiving Day of 1942 Richland County had amassed 12,459,934 pounds of salvaged metal: a tonnage that amounted to 154 pounds per person. It sounds amazing today, but it actually came about quite naturally around here because Mansfield, by 1942, had been industriously cranking out tons and tons of cast iron products for over 60 years.

Starting in the late 1870s there were three principle types of manufactured goods that Mansfield was known for: stoves, pumps and farm machinery.  The threshers, mowers and plows coming out of Aultman-Taylor were mostly made of metal aside from wooden parts; hand-pumps coming out of Barnes and Humphryes were nothing but cast iron; and the stoves of every description produced daily by Baxter, Eclipse (later Tappan,) New Method, Monarch and Westinghouse, were each cast iron literally by the ton.

In 1910 a catalog published by the Eclipse Stove Company displayed no fewer than 48 different models of heavy ironwear for kitchen, parlor and furnace: all utilizing wood fires for heat. In the decades that followed gas stoves came into wide popularity, so designs got more refined and smaller, but the stoves still had plenty of iron in them for recycling.

Mansfield produced thousands and thousands of cast iron products from 1882-1942 in all makes and models, but to locate even one specimen of each of those models today requires a lifetime of searching. Why? Because in 1942 they all wound up on the scrap pile headed to war.

Two huge bins were set up on the west side of Central Park, and the county was asked to donate their iron if they possibly could, or be paid for it.

The first ones into action were the farmers of Richland County who raided their barns to root out old iron implements to start the pile. Within 3 months they had gathered 670 tons of scrap. By the 4th of July they had stacked up 2600 tons of defunct farm equipment.

In July the City ripped up its streetcar rails to toss on the pile. They were to be cast into “fine tools, delicate airplane parts, and special bullets due to their high manganese steel content.”

In August the McVey Legion Post stepped forward and offered to cut up the German artillery pieces from WWI that decorated their lawn to “throw back at Hitler.” The City immediately proposed to scrap the giant Civil War cannons on the Square, with all the cannon balls stacked in little pyramids.

Ultimately, however, it turned out that the antique war memorial guns had been placed in Mansfield by Congressional decree, and couldn’t be destroyed without government permission. The War Department eventually conferred amnesty on the artillery, deeming that the patriotic value of the memorials far outweighed the iron scrap tonnage.

In October a day was set aside when classes were dismissed for all 4th, 5th, and 6th graders so they could make house to house scrap collection.  Aside from metal pieces, they also gathered rubber, tin cans, and ‘household fats.’

Senior High teenagers reacted with indignation to the suggestion by their principal that they considered themselves “too big to hunt scrap,” and engaged in the process with special fervor. Forming an “M” Club they hunted up over 500 tons, largely in dead cars.

Six tons came from John Simpson Jr. High alone, and each student who contributed 10 pounds or more got a free ticket to see the movie, “Laddie.”

St. Peter’s led the city with 792 tons of scrap—amounting to 149 pounds per pupil.

So how thoroughly did this wartime community effort permeate the city’s culture? Well, my mother was in the Halloween parade that year, and marched around the Square dressed up as a scrap pile—with tins cans, old pots and metal pieces tied onto and draped over her body—and everyone knew exactly what she was supposed to be.

1942 was a rare landmark in modern culture, when events galvanized the very diverse American public into one nation with a common purpose.

In the end what Richland County had to show for all its hard work in 1942 was an oversized war effort pennant for excellence, displayed at the courthouse, awarded by the Ohio Salvage Division for placing second out of 88 counties in the State of Ohio. But anyone who was there can tell you that what was important is not what we got, but what we gave.

No doubt all those little scraps of Mansfield’s industry—stoves, pumps and plows—are what constitute our myriad war memorials in the fields of Europe and the waters of the Pacific.

Images come from the collections of Phil Stoodt, and the Sherman Room of the Mansfield/Richland County Public Library.