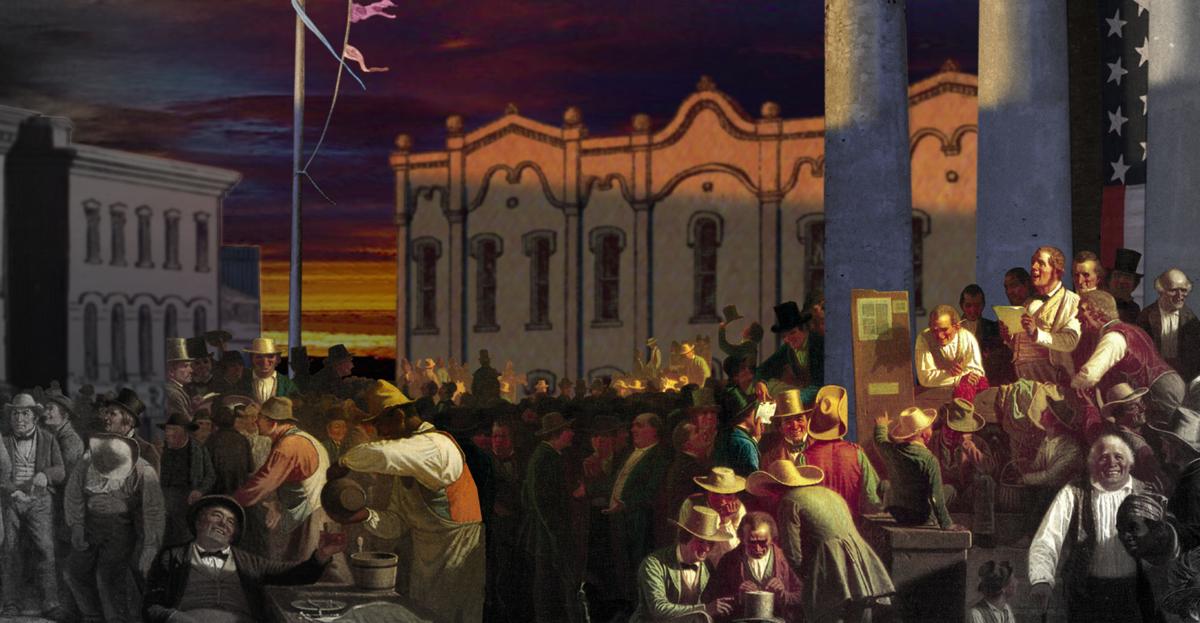 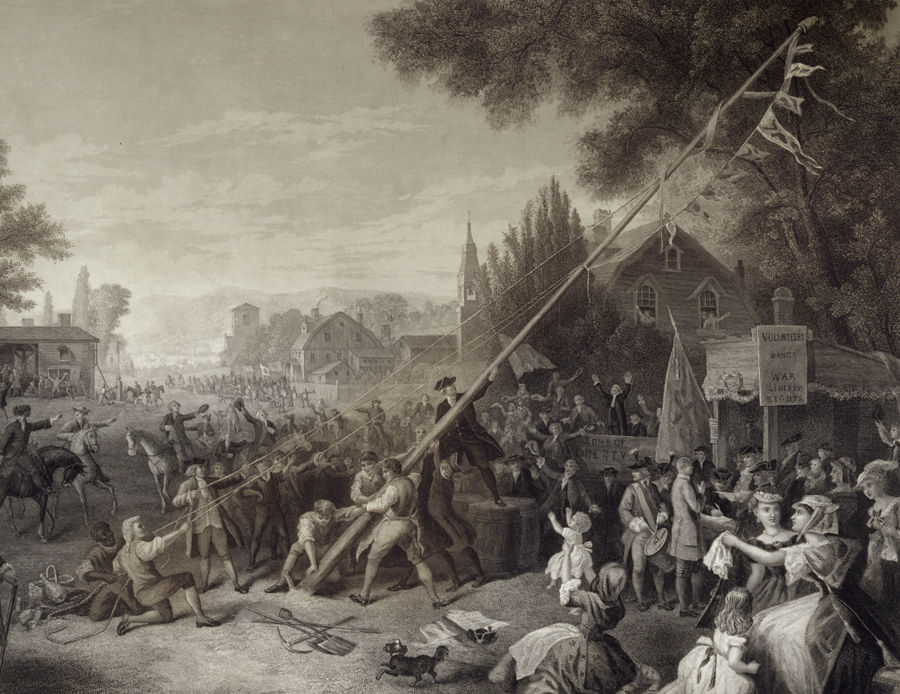 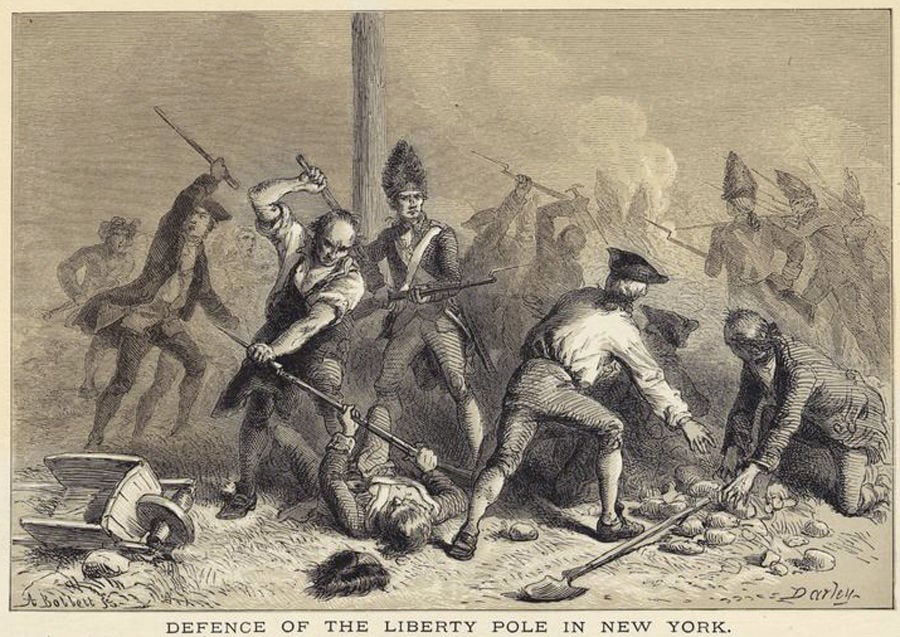 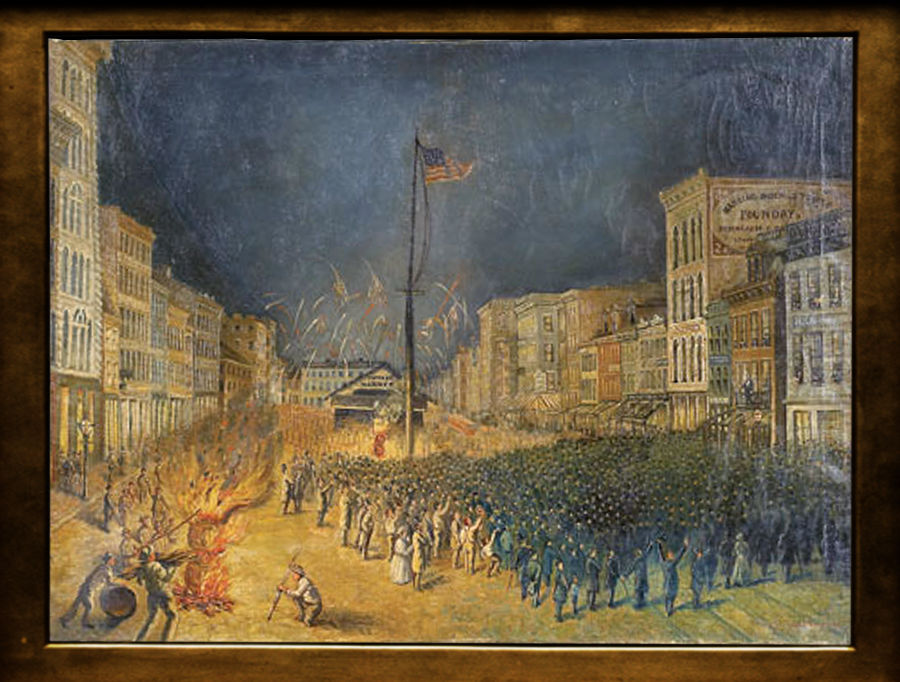 Civil War era patriotic demonstrations often included the raising of a Liberty Pole, in both the North and the South. 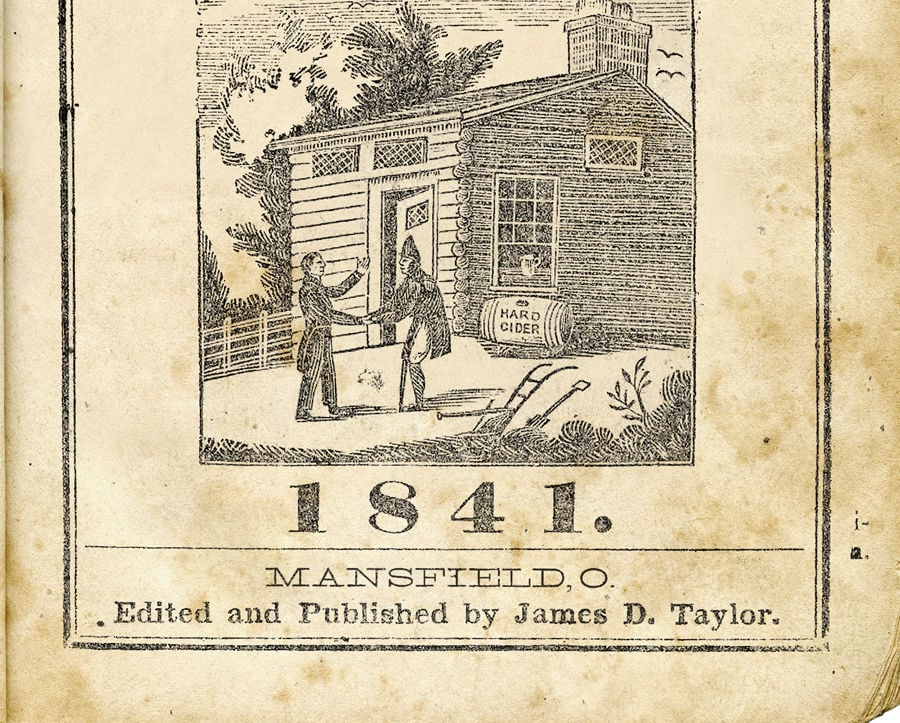 From the National Whig Almanac, No. 1.  Hard Cider is clearly the principal feature of this graphic cover. 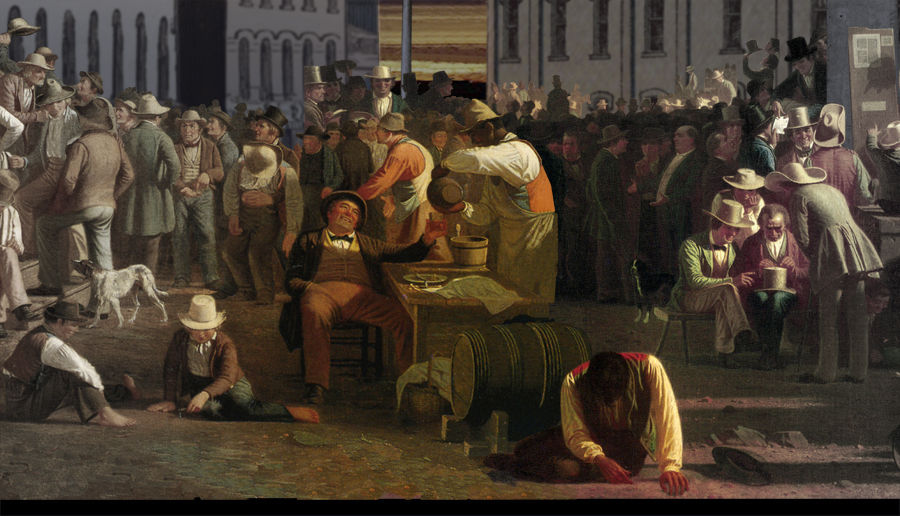 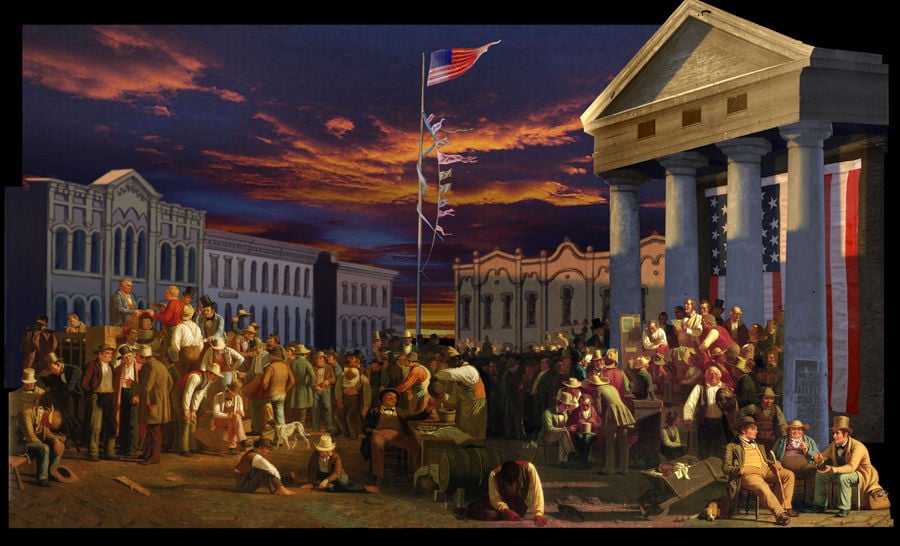 Composite image of a Mansfield pole raising including characters from the paintings of George Caleb Bingham (1811-1879). 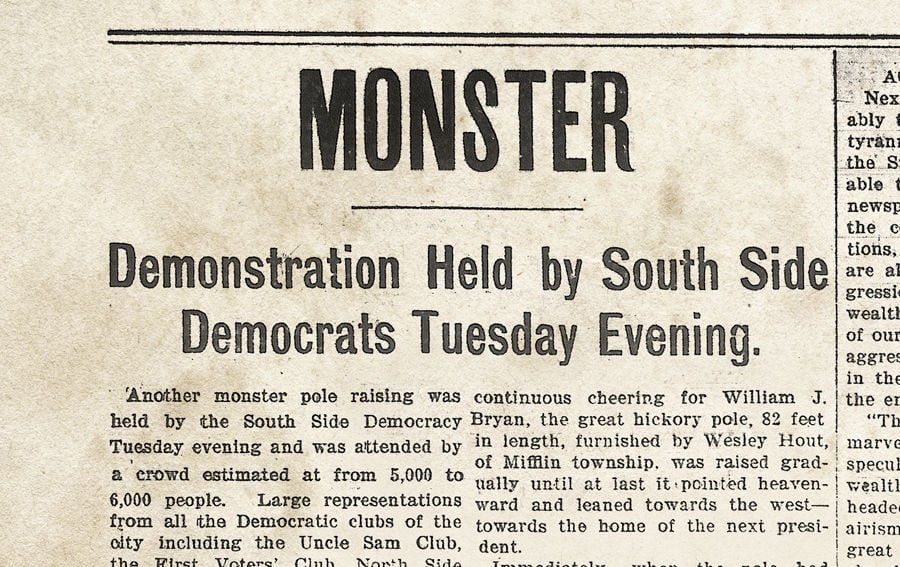 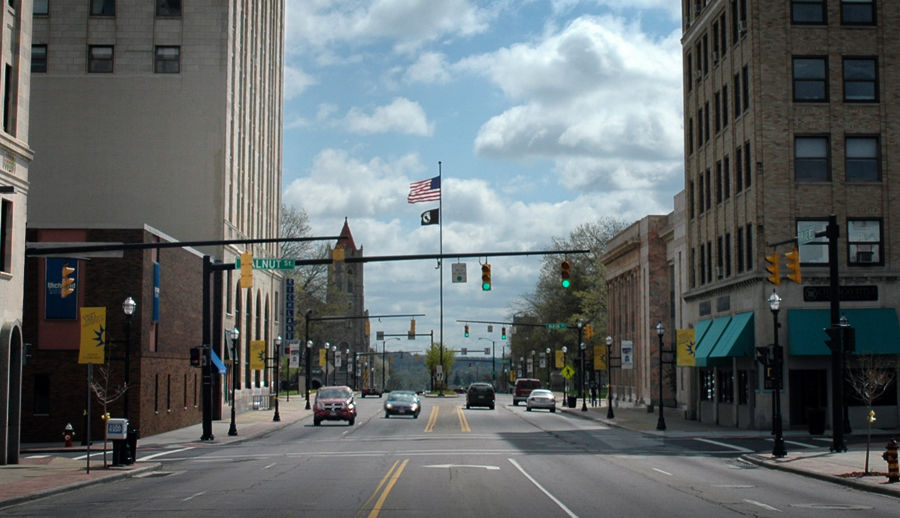 To help you imagine how a Liberty Pole might have looked in the 1800s in the Mansfield Square, consider this: the flag pole we see there today is roughly 50-60 feet tall, and the tallest Liberty Pole on record in the Square was 111 feet.

Every four years when the U.S. Presidential election heats up, all that political energy awakens old memories of elections past in Richland County.

There was a time when wildly enthusiastic partisans here used to demonstrate the passion they felt for their candidates by engaging in a very old American patriotic tradition: raising a Liberty Pole.

The idea was to put up a pole tall enough to tower over the town, and then fly a flag from the top that waved the name of their champion.

The event was intended to demonstrate public unity, because it took quite a bit of coordinated effort among many people just to pull it off. It was always a lively and powerful occasion when proponents could make speeches, carousers could tap the party keg, and everyone could get really happy and make a lot of noise.

These events were, in fact, advertised as “jollifications.”

They took place all over the county. In 1880, the year General Winfield Hancock ran for President, his supporters staged marches, pole-raisings, and spirited commotions in nearly every township.

The little village of Rome in Blooming Grove Township was so committed they presented a pole raising event that had three poles.

Monroe Township formed a mounted army of Democrats called the “Hancock Cavalry,” and marched 400 riders into Lucas for a horse-powered pole raising.

The Democrats of Troy Township “raised 10 hickory flag poles throughout the township to show allegiance to their candidates.”

From 1832, when the first pole raising was recorded in Mansfield for Andrew Jackson, until 1900, when the last one was held in Bellville for William Jennings Bryan, the county echoed with campaign songs, Roman candles, endless orations, and the cheerful flapping of flags high atop hickory poles, every four years.

The heritage of hickory

The tradition of raising a tall wooden staff in the public square dates all the way back to ancient Roman politics at the time of Caesar. With a slave’s hat mounted on top of the pole it was emblematic of protest against tyranny, or celebration of the ‘elevation and recognition of common folk.’

At the time of the American Revolution the tradition became grafted into United States politics when hickory poles were put up in subversion of British rule.

The first poles erected by the Sons of Liberty were fabricated in celebration of political victories. But when these poles were chopped down by indignant British troops, they became a symbol of defiance and self-determination.

Liberty Poles were placed in highly visible public venues to taunt the British, and replaced whenever they were cut down. This rebellious activity served to establish the hickory pole forever in the American imagination as a wholly patriotic icon.

After the war was over, all the U.S. political parties during the following century naturally appropriated this symbolic gesture for their own sense of power and sense of righteousness.

The other heritage: hard cider

Of course it doesn’t take much of an occasion to get folks to drink, but speaking in terms of American politics there is an actual traceable lineage of the connection between alcohol, elections and Liberty Poles.

William Henry Harrison was the ‘log cabin and hard cider’ candidate that year, which was to say he was no champagne-sipping elitist, but rather a down-to-earth man of the people.

As a notable military superstar of the era who drew on his heroic stature for votes, Harrison's campaign literature claimed his door was always open to war veterans, who were welcome to share his cask of hard cider.

This populist notion in 1840 strongly echoed the tried-and-true anti-tyranny propaganda of the Revolutionary era, so it wasn’t surprising that the Presidential campaign that year saw the resurgence of the Liberty Pole.

The Liberty Pole was a truly all-American icon, which could be claimed equally by both parties at any given time. Whether it was Federalist vs. Whig, or Whig vs. Democrat, or Democrat vs. Republican, both parties in any given epoch had high-minded claim to use of the Liberty Pole.

Generally speaking, they put up their poles in separate places at different times, but it was unquestionably a competition.

If one party got a 90-foot pole up on one side of the Square on Thursday, by Sunday there would be a 95-foot pole on the other side.

They knew better than to attempt both parties at the same time.

In newspaper accounts, there are never any record of arrests made at these shindigs. The drinking, the arguing and posturing, the loud noises and bloody noses were all considered part of the procedure. As long as no windows got broken it was all part and parcel of the election.

When you’re looking today for documentation about the Liberty Pole phenomenon, it is not difficult to find places in Boston, New York and Philadelphia designated with huge metal markers at the historic sites where poles were once raised.

If you were to make a similar pilgrimage today in Mansfield there is nothing to mark the site of the city’s last pole, but I can tell you where the marker would be.

It took place in October of 1900 when the ‘South Side Democracy’ staged a memorable event.

A considerable crowd met at the Square and marched up the South Main Street hill. There was the Uncle Sam Club, the First Voter’s Club, the North Side Club, the German Club and the Boy’s Club. There were 1,500 of them marching up the hill to a military band, and many of them in white caps carried umbrellas emblazoned with the name of their candidate: Bryan.

At the site of the pole raising there were 5,000 to 6,000 people who set up a spirited cheer when the 82-foot hickory pole reached the sky.

There were skyrockets and way too many speakers, and while the band played “the crowd set up a mighty shout as Old Glory shot to the top of the pole.”

If you want to make a pilgrimage to this historic site you’ll find it considerably quieter today. It’s at the corner of Ford Street and Altamont Avenue. There are some cemetery buildings on part of the lot today, but if you stand in the grass there is enough space to let your imagination free.

And if you could listen well enough to break through the last 100 years, you might hear the distant echo of a happy crowd, and the sound of a flag snapping in the breeze at the top of a tall hickory pole.

When I suggested to my friend Ed Meehan (1937-2015) that we should stage a Pole Raising on the Square he enthusiastically encouraged me to pursue the idea.  He went on to say that, though he would love to participate, he was glad he didn't have to organize that one.