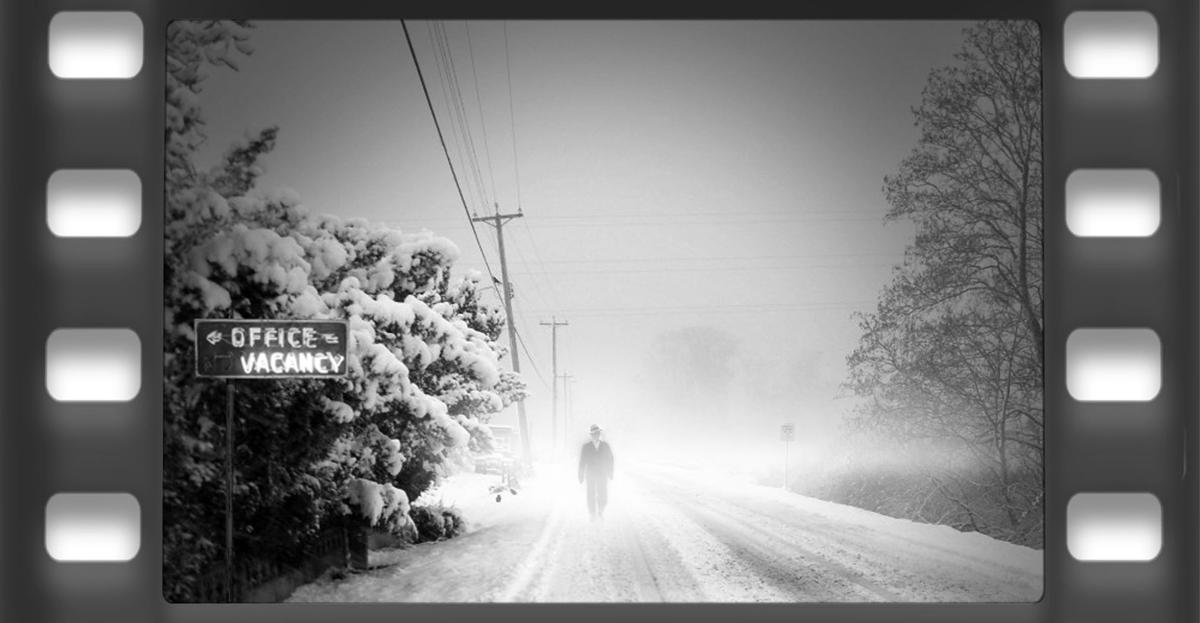 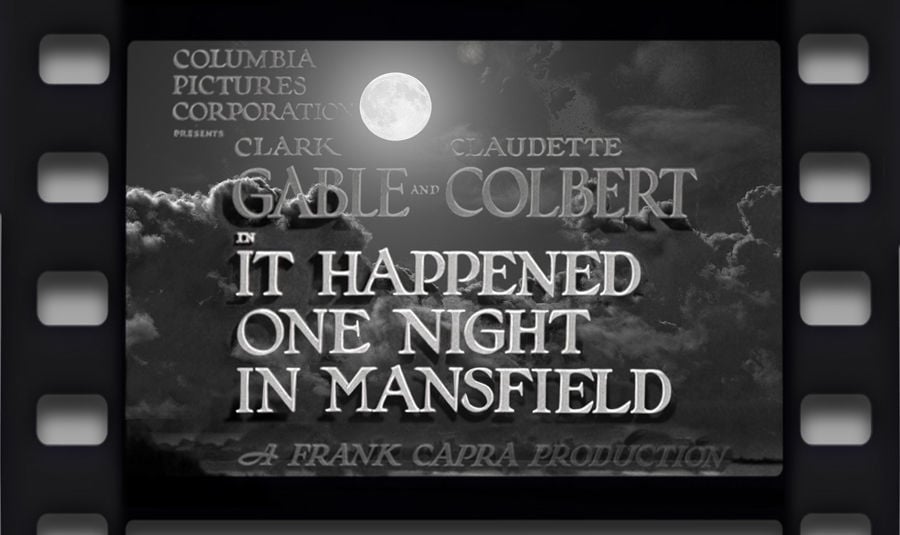 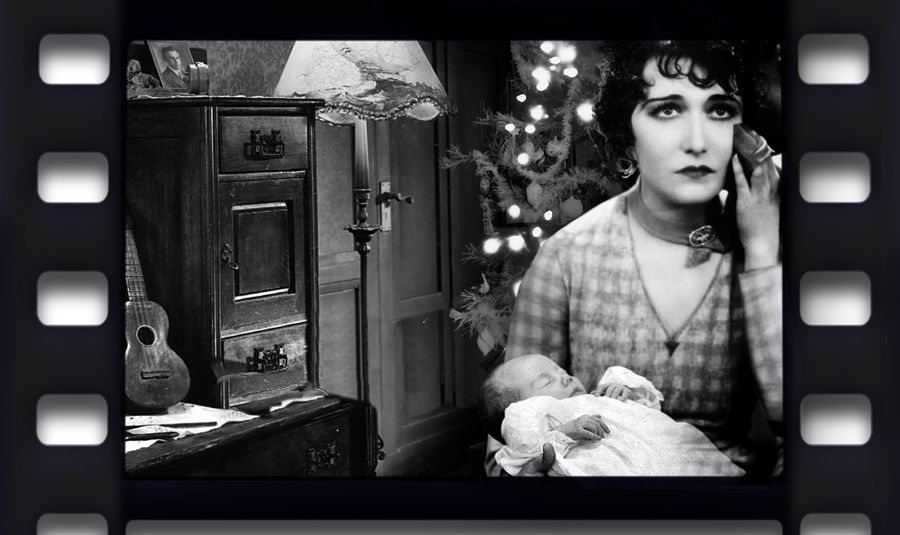 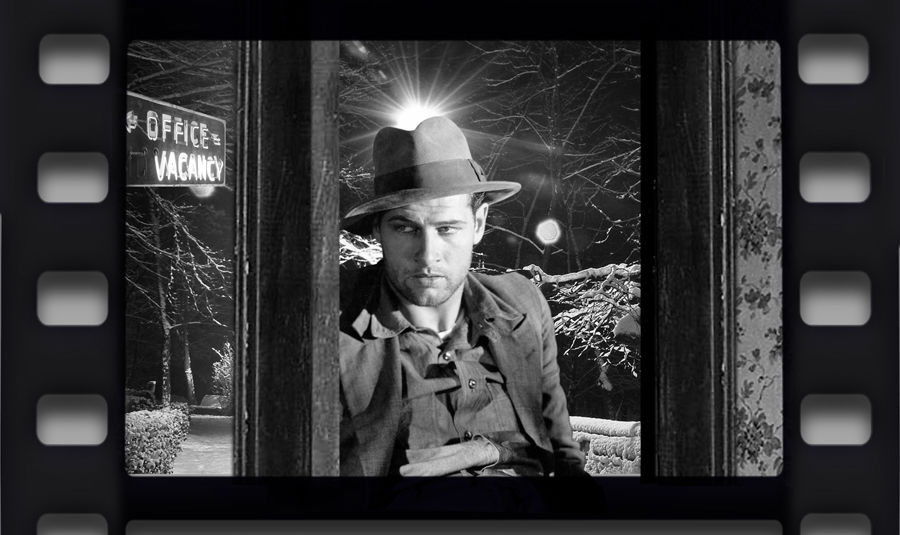 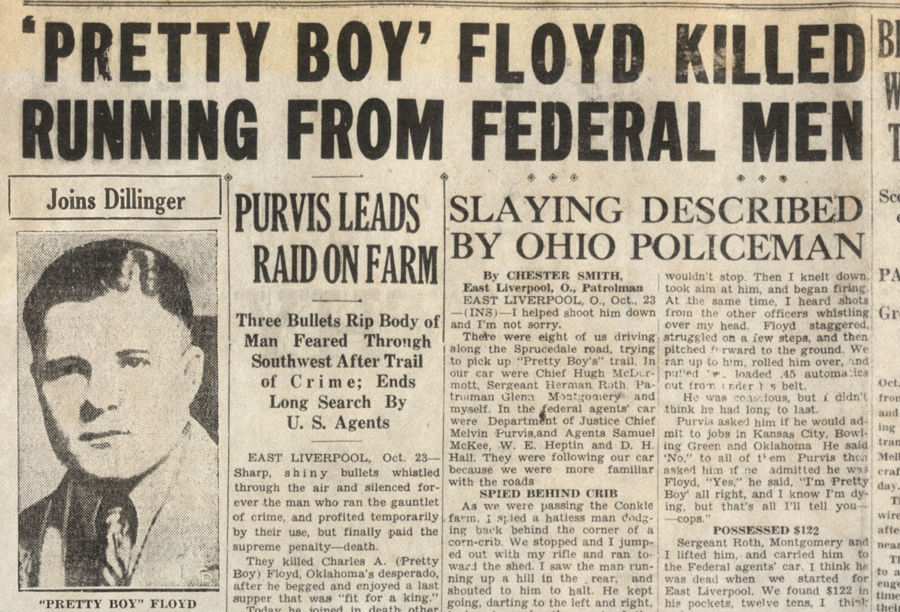 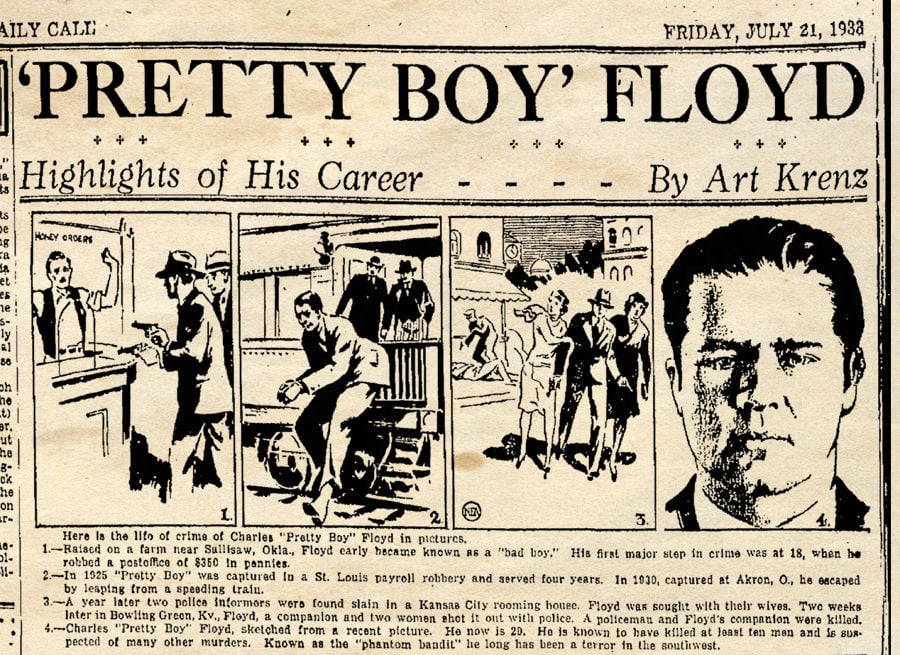 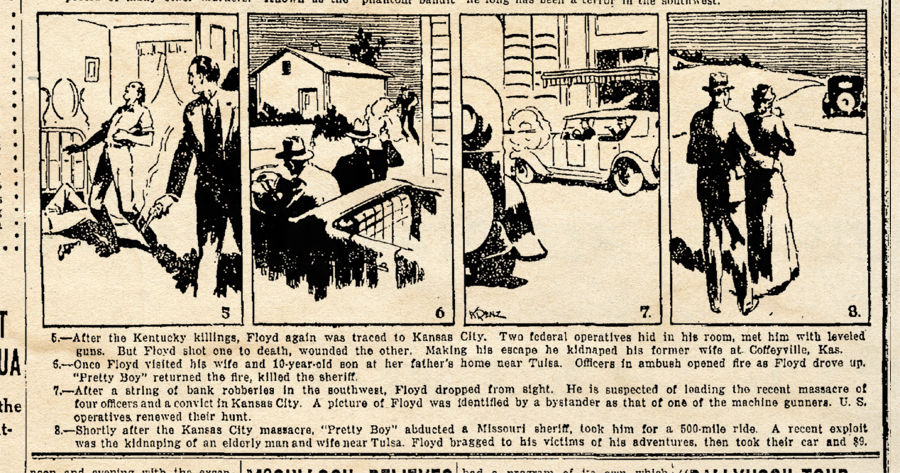 This syndicated synopsis of Floyd's career was published in newspapers during the summer of 1934 when he was Public Enemy #1. 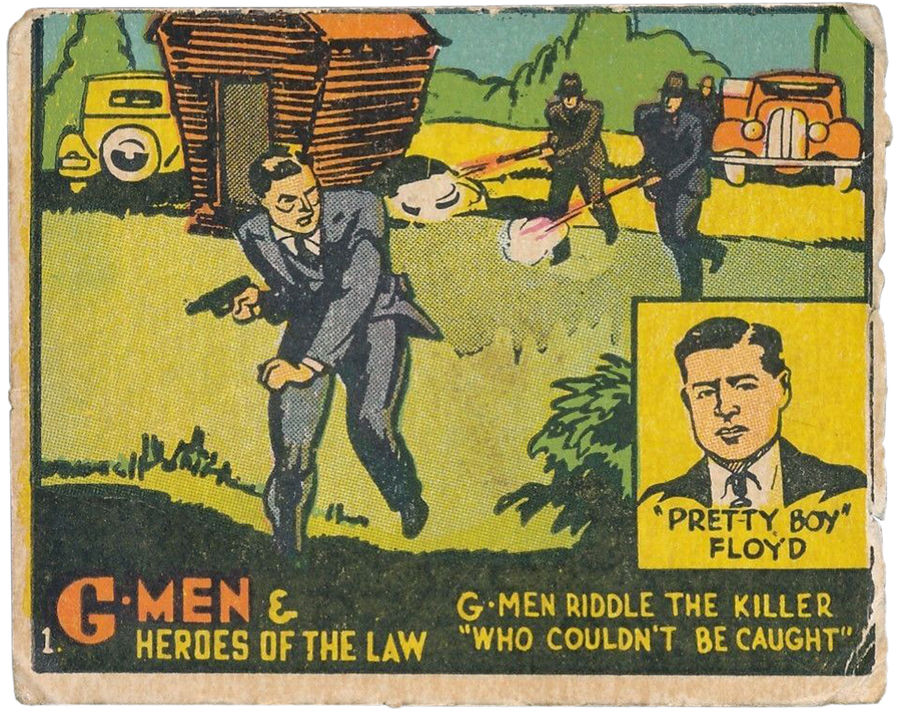 In 1936 when the "G-Men & Heroes of the Law" trading cards were issued, the set had 168 different episodes but card #1 was Pretty Boy Floyd. 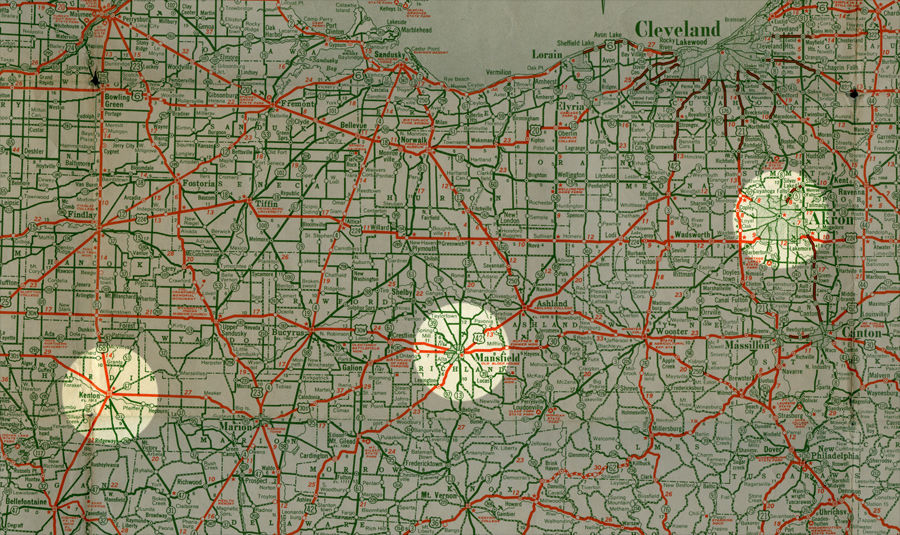 A 1930 road map of Ohio highlights the proximity of Kenton, Mansfield & Akron. 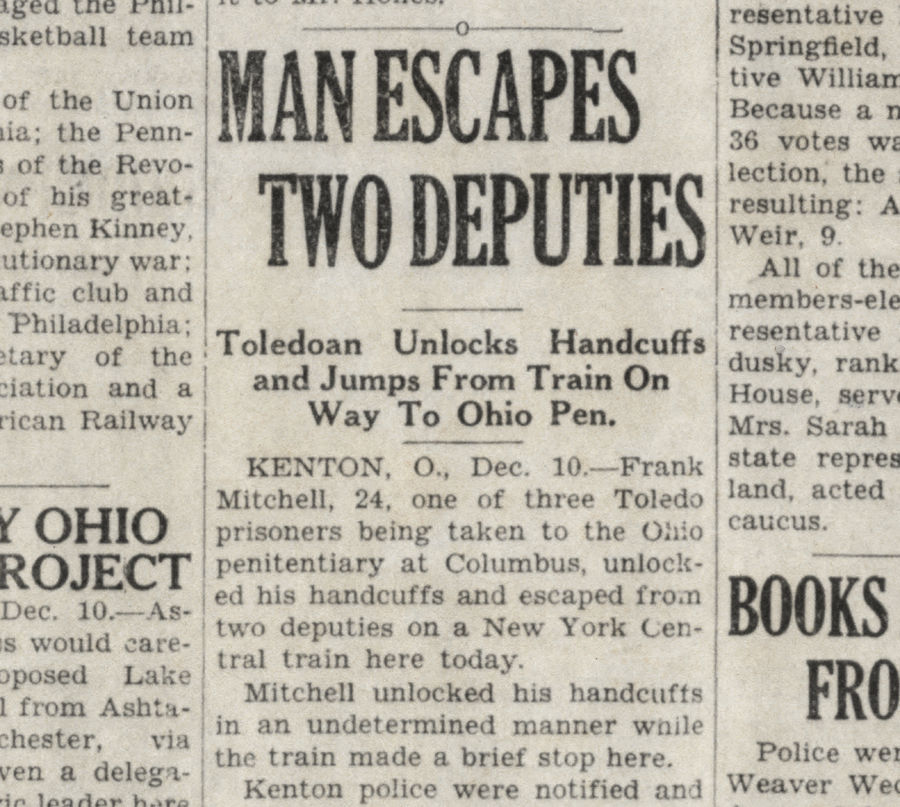 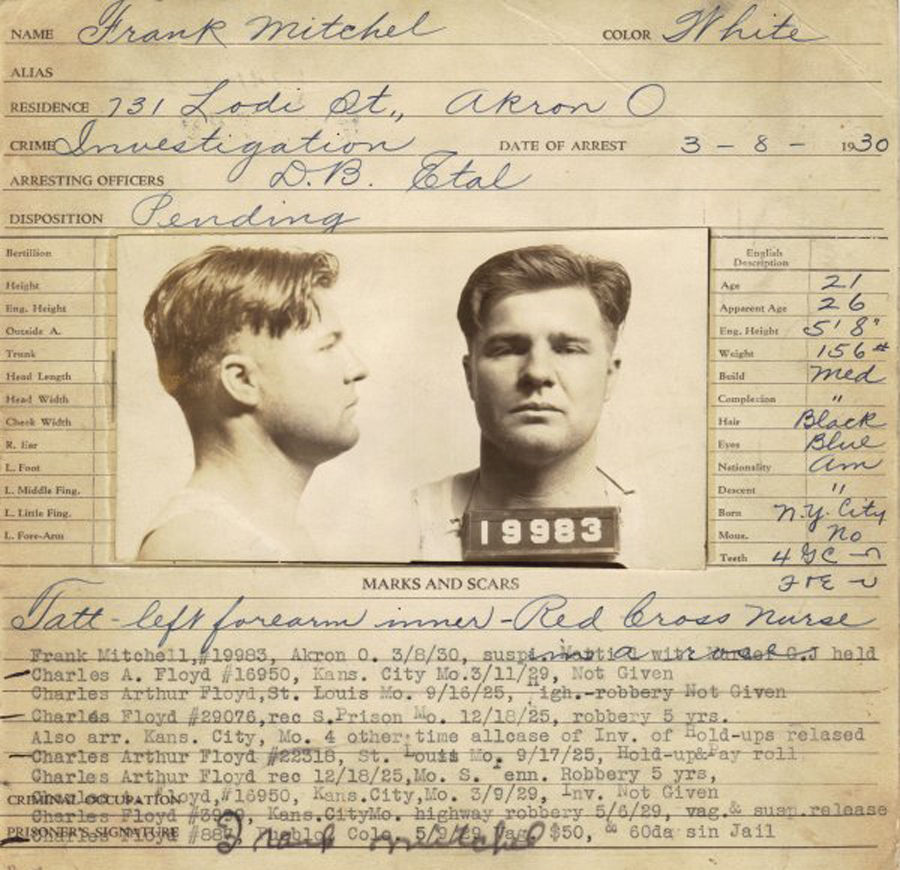 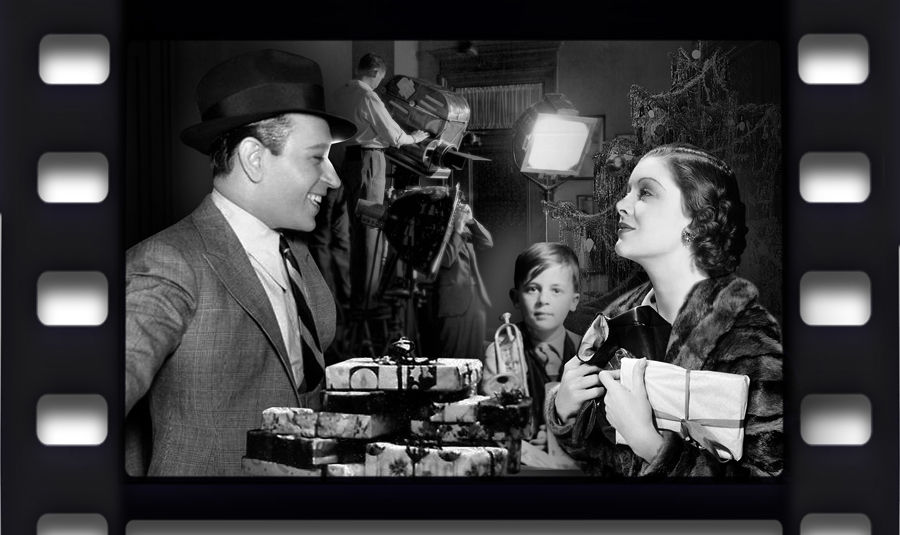 Back in the 1980s I interviewed an old woman in Mansfield because I wanted to learn more about the 1930s, when she operated an Auto Park of tourist cabins on Route 430 east of town.

She told me, almost casually, that she had once given a room to a famous gangster.

When I asked if she had ever told her story to a reporter she dismissed the idea, saying no one would care because no one remembered any of that anymore.

“He was nobody you ever heard of,” she said.

As I persisted in my queries she revealed that his name was Pretty Boy Floyd.

At first I was highly skeptical.

People who feel powerless in life like to drop big names, and associate themselves with characters of consequence who make history.

So when Nettie told me about the mysterious Christmas visitor who came to Mansfield and brought toys to her little boy when the Depression had broken her, I had my doubts.

There was something about her, though, that rang true. She wasn’t trying to convince me, and she didn’t seem to think it was as big a deal as I did.

Her eyes were shining as she remembered the past.

I wondered if this was some old 1930s black-and-white movie she saw once: it seemed too romantic and scripted.  Real life is almost never wrapped with such tidy plotlines.

Maybe the film lodged in her mind long ago and now in her old age she was remembering it like it happened to her:

Her storyline was intriguing though, so I dug in and did the research.

The plot of the movie

In the late 1920s the Lincoln Highway opened a new route through Richland County on roads that were considerably improved over the original improvised route, and each succeeding year during the tourist months the number of cars passing through increased exponentially.

So Nettie and her boyfriend Luther determined to cash in on the tourist boom. In March of 1928 they got married. In June they borrowed some mortgage cash and bought a roadside camp of traveler’s cabins east of town. In July they moved into the office/house at the Auto Camp.

Things went so smoothly at first the days passed like a dream; and then without warning it suddenly turned into a horrible nightmare.

That December Luther was killed when his car spun off the highway on the edge of Mansfield. Nettie buried her husband in the snow and then, right before Christmas, gave birth to her son, who was known, from the moment of his inception, as Pickle.

It was the roughest Christmas of Nettie’s life, and from then on the yearly holiday lights served only as a hollow reminder to her of how bitter life can be.

Nettie stayed on at the Auto Camp because it provided a steady small income, and it kept her from being too alone.

As Christmas approached she tried to raise some kind of cheer for her boy’s sake but she was having trouble seeing any kind of future for him.

It was Dec. 22, on Pickle’s second birthday, when the knock came.

She knew it was odd before she even opened the door. It was one of those subconscious audio connections she suddenly missed: before the knock there was always a preliminary sound of a car pulling in; the crunch of snow in the drive.

But she had not heard any car and, oddly, the first picture through her mind was of angels alighting: stepping down to her landing from out of the sky without a sound.

There was a young man at the door — a boy with gray eyes, and she had the most surreal feeling that she was looking at her own little son grown up.

He was wearing a pathetic assemblage of clothing that fit him so badly it obviously did not belong to him. And he stammered and paced so uncomfortably it was like he didn’t even belong in his own skin.

He asked if he could shovel some snow to earn a bite to eat.

Nettie had seen plenty of hard luck folks at her door — the road was full of them in 1930 — but she never before that day had her heart suffused by pity at the sight of such desperate eyes.

Her heart just flew open, unaccountably, like popcorn bursting out of a hard little kernel.

It made her open the door, and then she opened her pantry, and she opened Luther’s closet and gave the boy his good winter coat.

The boy’s name was Frank Charles and he stayed in Cabin #6 until the day after Christmas when it warmed up again.

Then he walked off east toward Mifflin in a pair of Luther’s winter shoes.

He never signed the register, but Nettie wrote his name in there because she didn’t ever want to forget the gray-eyed angel who strung popcorn for Pickle’s Christmas tree.

In December of 1931 a card arrived in the mail that was addressed simply to Nettie and Pickle. It had a Christmas tree and a $20 bill. There was no return address or signature but Nettie was sure she knew who it came from. The stamp was postmarked in St. Louis.

In December of 1932 there was another one. It had two $20 bills folded inside. This one was postmarked in Buffalo, New York.

By December of 1933 Nettie and Pickle were both watching the mailbox. They were disappointed when Christmas Eve arrived and there was still no card from their mysterious friend, because this year they really needed the money.

Just after dark they heard a car pull into the Auto Park and then a knock at the door.

Nettie didn’t recognize the stranger because he was dressed in a nice suit, but when he asked if they were going to string popcorn for the Christmas tree there was a big smile on his face, and she knew immediately it was Frank.

He had a pile of toys in his car for Pickle, wrapped in green Christmas paper. After he had departed a couple hours later, Nettie found $100 tucked inside the pages of her register book.

Nettie had no idea of Frank’s true identity until October of the following year, when his picture was on the front page of all the papers.

History and popular culture have remembered him as “Pretty Boy” Floyd, and cast him as a country bumpkin-gone-rogue gangster who helped necessitate invention of the FBI by terrorizing the country with interstate crime. He was among the first and most important of the Public Enemies.

He still has a mythic stature today as a counter culture folk hero who robbed anywhere from 30 to 60 banks and dodged the law before dying young.

Floyd is generally associated with American locations set further west in the Midwestern states, but various events of his criminal career took place in Ohio. His life ended in a famous burst of FBI gunfire in 1934 at a site that is only about 100 miles east of here in Columbiana County.

In spite of all the regional lore about him that fills the pages of Oklahoma and Kansas City history, it is actually not at all difficult to place Pretty Boy Floyd in Richland County at Christmastime of 1930.

Earlier in December of that year he had been convicted in a Toledo court of an Ohio armed robbery. On Dec. 10 he was en route to the Ohio Penitentiary in Columbus when he managed to escape the law by jumping off the train.

His last sighting leaving the train was on Dec. 10 near Kenton, Ohio. The next placement of him, documented in FBI files when he made a phone call, was on Jan. 4 in Akron, Ohio.

If you draw a line on the map from Kenton to Akron it passes right through Mansfield at almost exactly the halfway point.

If you count the number of days between Dec. 10 and January 4 and split them in half it lands on the calendar at Dec. 22: Pickle’s birthday.

Charles “Pretty Boy” Floyd was living under an assumed alias when he was convicted in Toledo: the court dockets record him as Frank Martin. When Nettie opened her door to him on Dec. 22, 1930 he gave his name as Frank Charles.

Interestingly enough, when studying the biographical timelines available on Floyd to further corroborate Nettie’s tale, there is one more critical date that corresponds exactly.

She said he showed up at her door on Christmas Eve of 1933. All the 1933 documentation from the FBI files, collected from interviews with everybody who tracked Floyd at the time, said the same thing: he disappeared around Christmas, and nobody knew where he was.

I wish I could have another conversation with Nettie about her tales of the 1930s. There are so many questions I’d like to ask that never occurred to me when we spoke in 1982.

I keep hoping that one day I’ll run across her old motel register ledger book at some garage sale. She showed it to me when we spoke, with all its pages covered in newspaper clippings of Pretty Boy Floyd, photos, magazine articles and scraps torn from dust jackets.

What I remember most were the Christmas cards pasted in on top of page after page of names: names that meant nothing to her 50 years after they were signed into her register … except the one name that was written in her own handwriting so she would always remember the man who was her Christmas gift.

The story you are about to read is true.  The names have been changed to protect the innocent.

She was the only one whose reminiscences made me wish I had lived during the Great Depression.