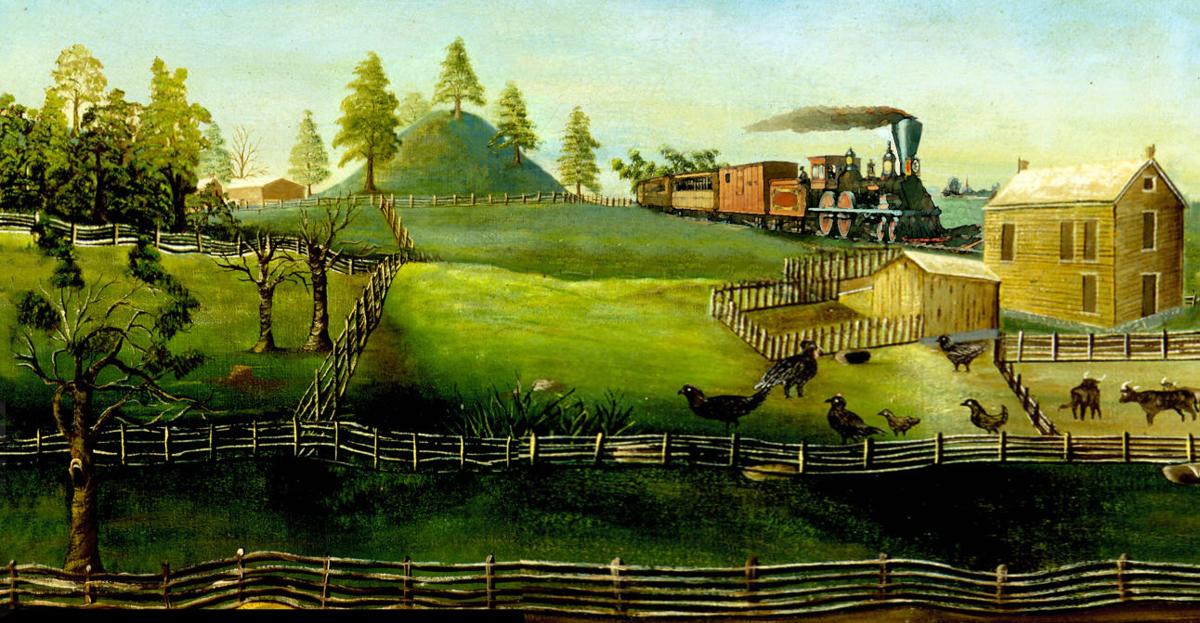 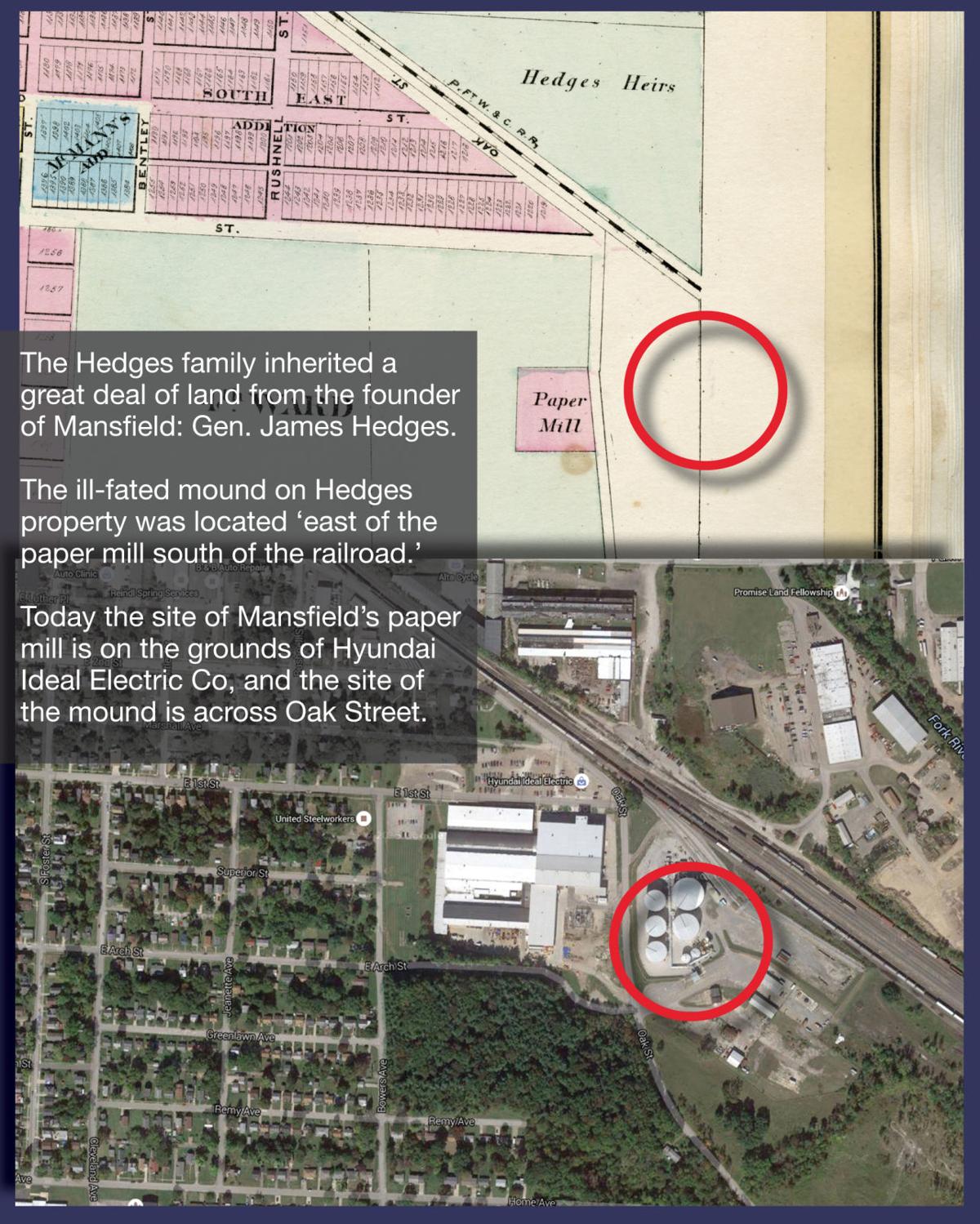 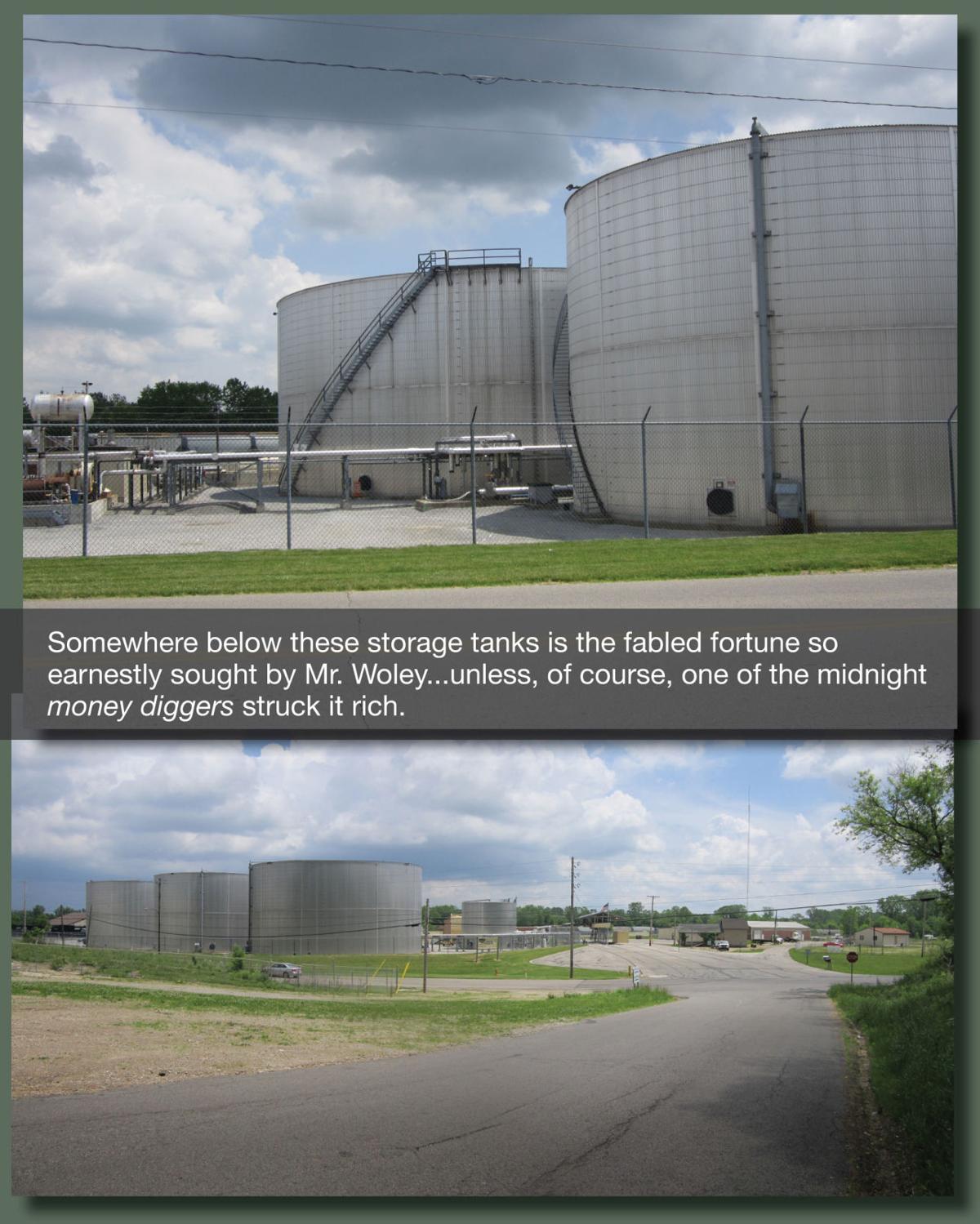 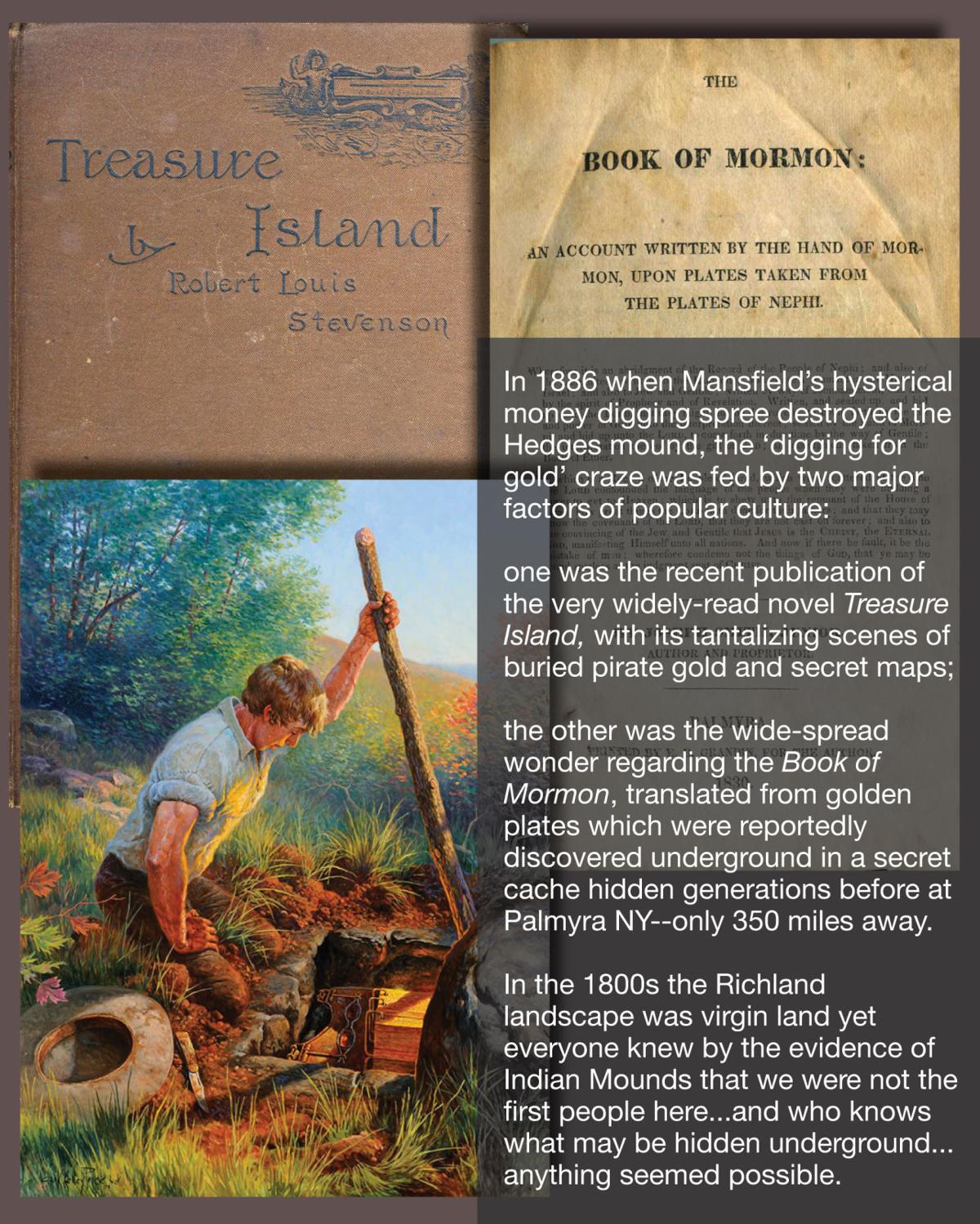 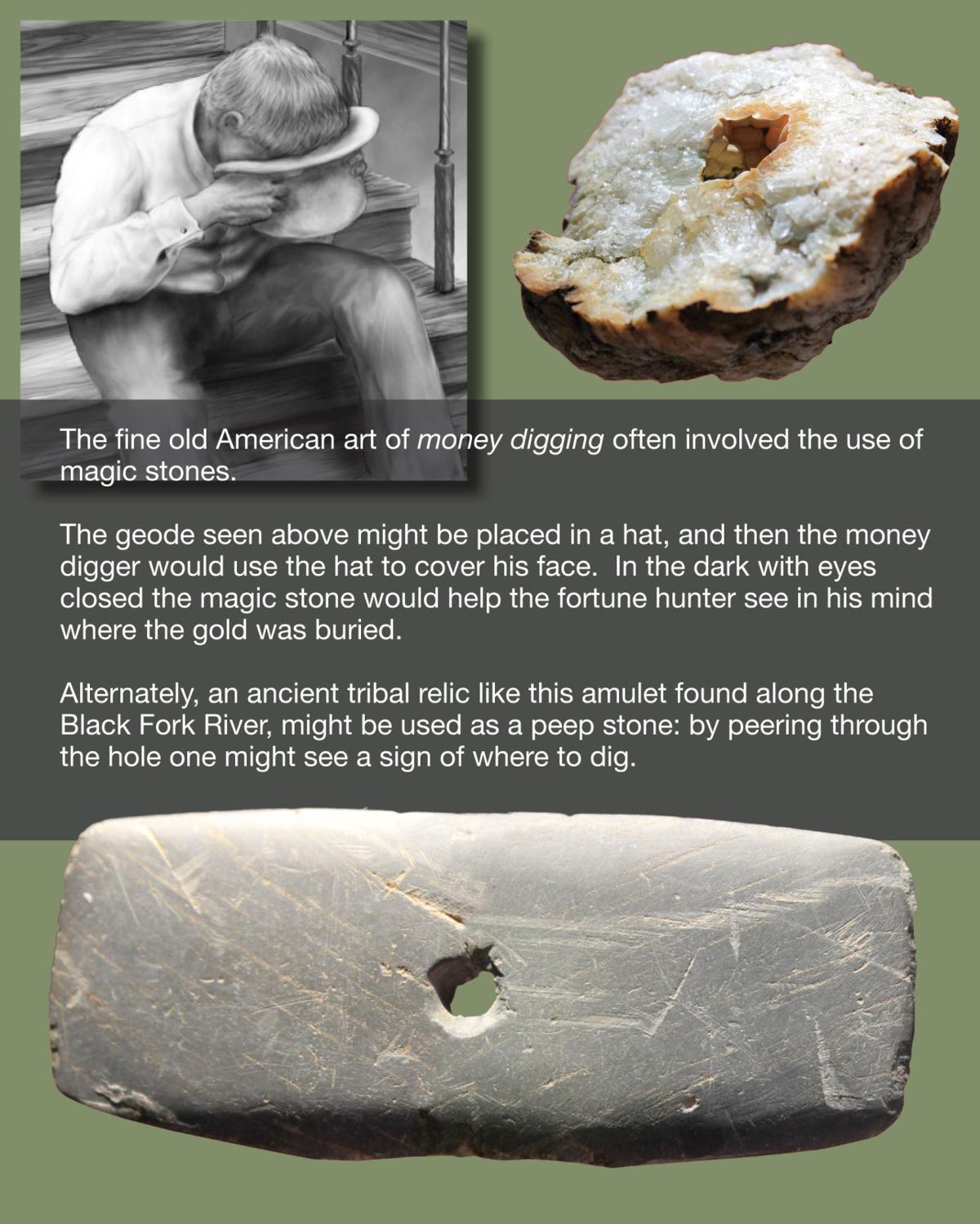 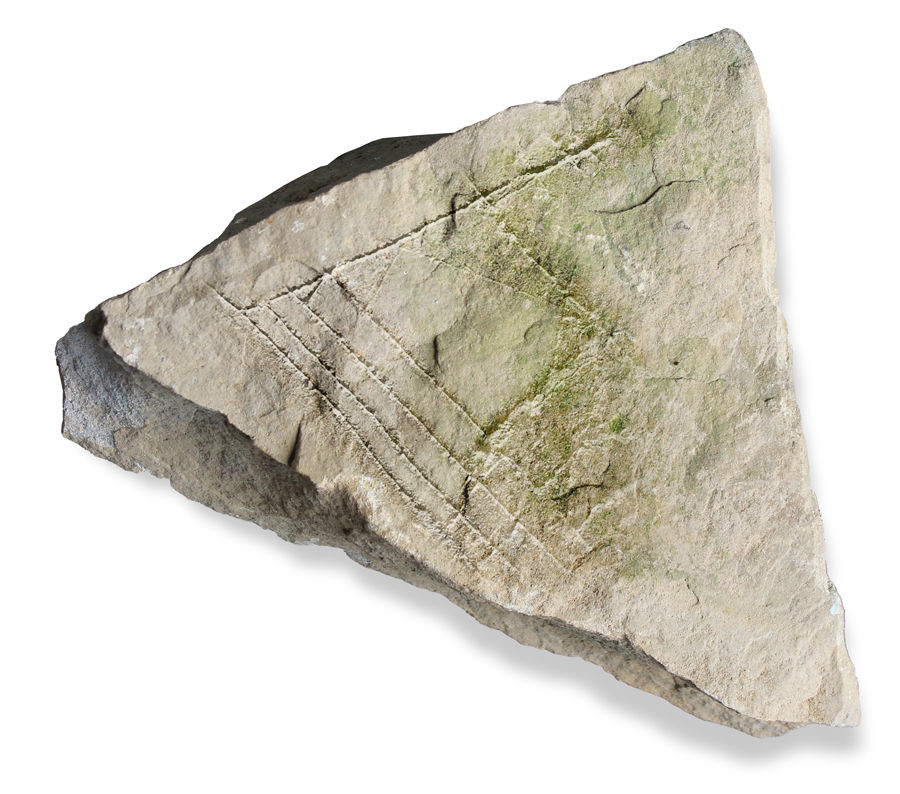 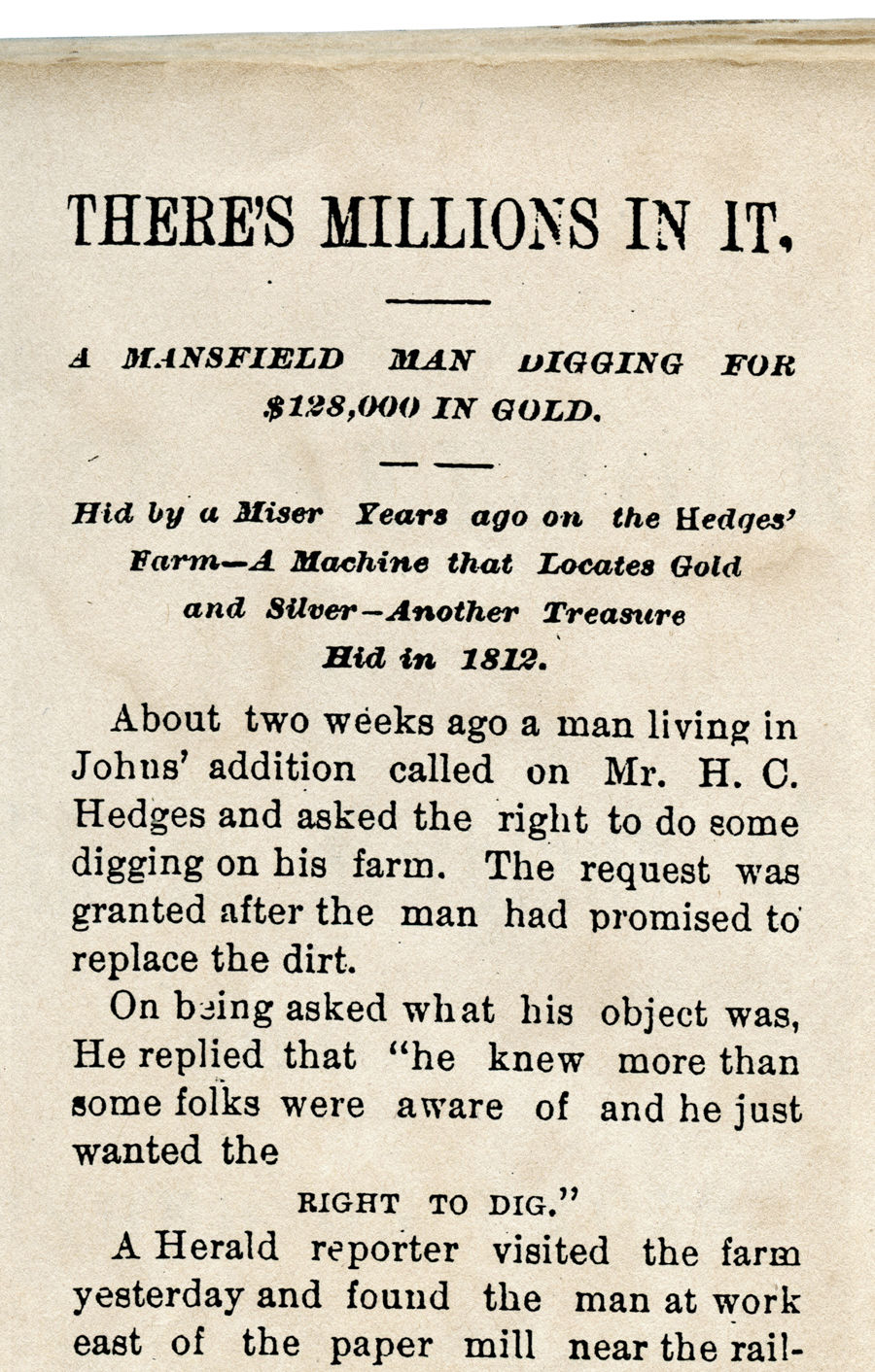 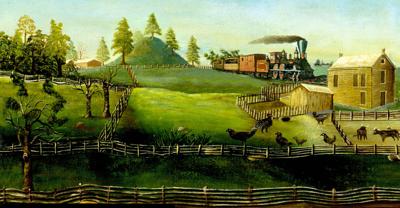 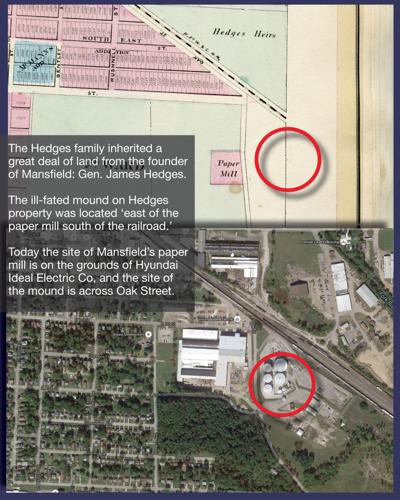 It started out innocently enough. In 1886 JC Woley approached Henry Hedges downtown and asked if he could dig a hole on some land Hedges inherited on the east end of First Street down by the tracks. He promised to put the dirt back.

Henry Hedges said he didn’t mind. He figured it was an archaeological probe because some people thought that the prominent knoll down by the tracks might be an Indian Mound.

Actually Woley wasn’t looking for Indian relics or prehistoric bones, he was digging for gold.

What Mr. Hedges didn’t know and Mr. Woley did was that a strange tale was circulating through the undercurrents of Mansfield’s north end in various bars, saloons and drinking establishments. Story went that some rich guy got paranoid about banks so he buried his wealth in a couple of pots at a secret place he could easily identify.

When the old guy suddenly found himself on his deathbed the last words he croaked out were a cryptic series of clues as to where his gold was buried.

Those closest to inheriting were frantic about deciphering the scrambled message, and were all furiously digging around in the yard—in, around and underneath the old man’s hedges. That was the one word they all heard quite clearly: hedges.

Woley knew it wasn’t a shrub the old man was pinpointing, it was Mansfield’s landmark Hedges Farm.

Somehow word leaked out and reached the ears of a nosy reporter for the Mansfield Herald, and he strolled out to the Hedges Farm to take a look. He found Woley with a pickaxe swinging away at the knoll down by the tracks.

Just how the reporter got Woley to talk about his secret is not included in the newspaper account, but we have to assume there was some whiskey involved in the process otherwise Woley wouldn’t have spilled all his plans to a man who was clearly intent on broadcasting the news. Of Woley the reporter wrote, “He talks in a rational manner, and not at all like one who is insane.”

Woley even revealed to the writer a treasure map rock that had turned up early in the dig. Apparently the old rich guy had carved a triangular diagram into a chunk of sandstone delineating just exactly where the fortune was buried.

Most people who saw the fabled rock in subsequent years said it appeared to be a fieldstone that had been hit repeatedly by a plow, and the scratches were random etchings without design or intent.

When the Herald came out Tuesday morning and the news broke that gold was somewhere underfoot in the Mansfield environs, there was an instant run on shovels in the town hardware stores. All of these men buying implements of excavation claimed they were wanting to plant trees.

As soon as it was full dark that evening, so that men could creep in the dark unseen, there was a great convergence of tree planters on the east end of First Street near the railroad tracks.

The fact that all these Mansfielders showed up late at night has less to do with stealth than you may imagine, and more to do with superstition. It isn’t commonly talked about much today, but in the decades between 1820 and 1869 (before baseball was born) the Great American Pastime was Digging for Gold. "Money Digging," as it was known then, was a sort of art form, often involving conjuring, elemental spirits, dreams, peep stones, seeric gifts, and enchanted treasures.

Grown men fully believed that buried treasure was easier to locate under a full moon because it gave off a bluish flame in the moonshine. They believed they had to outwit invisible guardians who watched the gold; and had to turn around three times before picking the treasure up or else it would disappear.

Most believed that treasure digging worked best during the summer months from midnight until sunrise, and it was of critical importance that diggers maintain strict silence at their labors. (It was well known that spirit guardians will trick diggers into muttering profanities by dropping a crowbar on their foot, thus killing the spell and making the gold disappear or move underground.)

There weren’t any houses in close proximity to the Hedges mound in 1886, but even if there had been no one would have heard any suspicious noises that night because all the claim-jumping money diggers were required by strict tradition to maintain absolute silence.

Poor Woley came back the next morning to work on his dig at the Hedges knoll to discover it no longer existed. Like one of those magic spells the mound was gone—completely decimated, shoveled to oblivion and flattened.

Though Woley had promised to replace all the dirt, afterward Henry Hedges could hardly hold the sad man to his promise. Instead Hedges sold the land to the Pittsburgh, Fort Wayne & Chicago Railroad and they built a switching yard and roundhouse on the lovely piece of flat property.