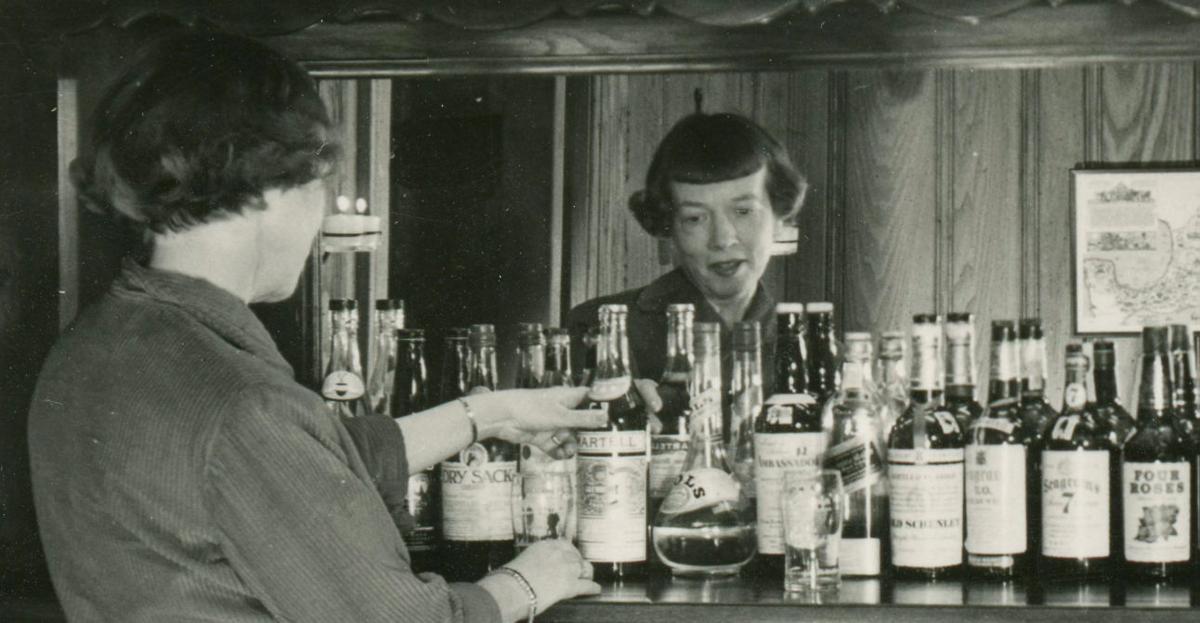 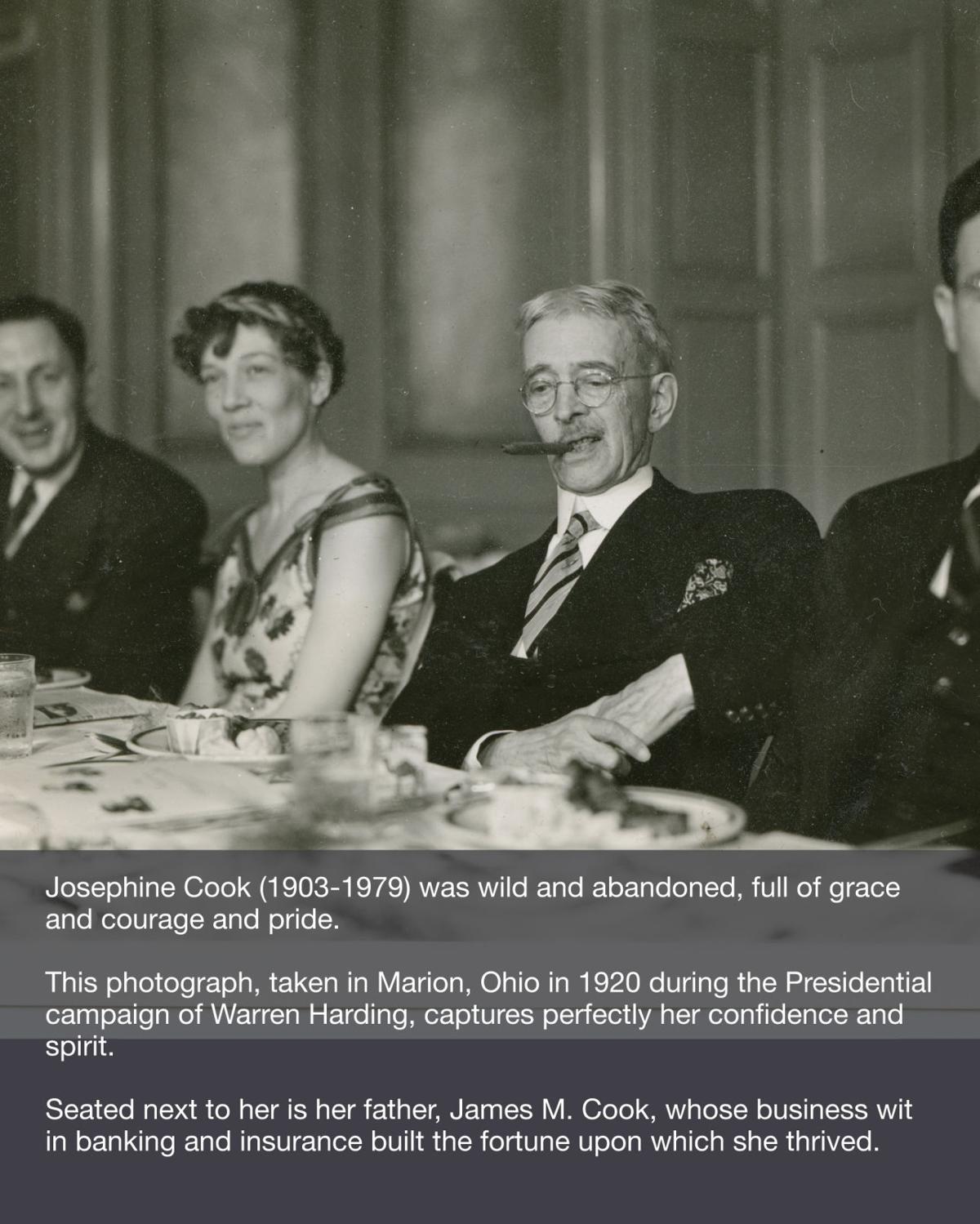 Josephine Cook with her father in 1920 during the Harding Presidential campaign. 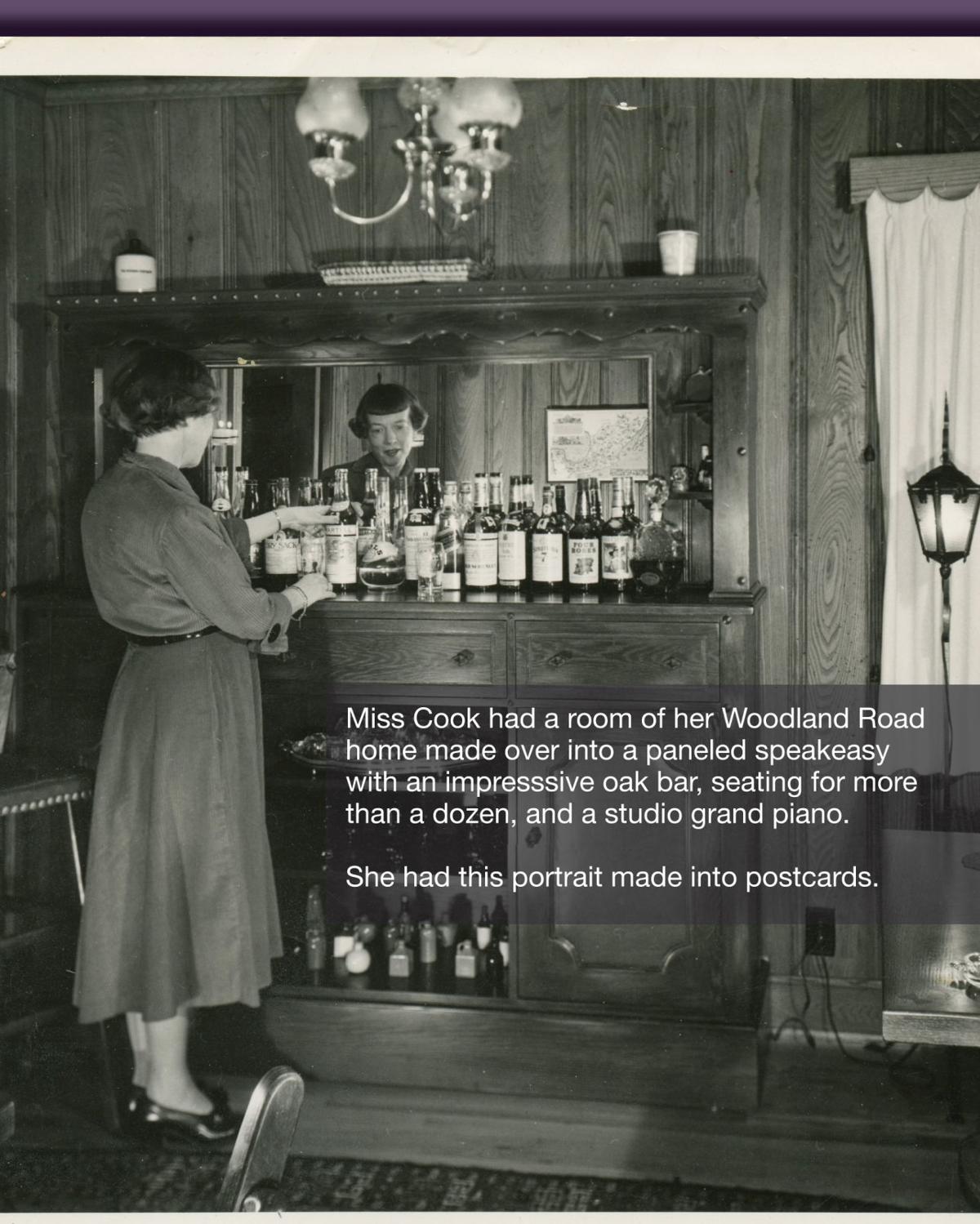 Josephine Cook at home on Woodland Road in the 1970s 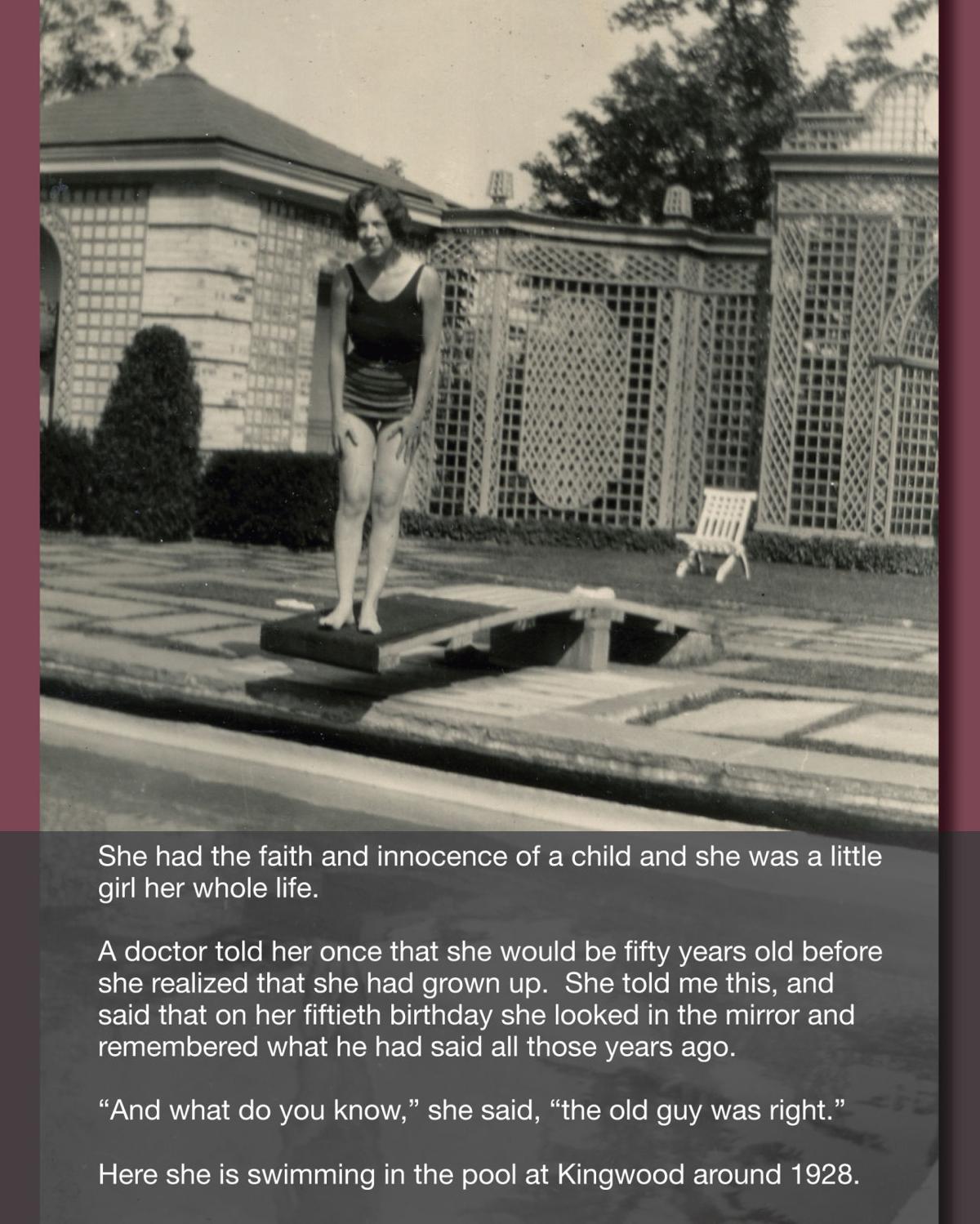 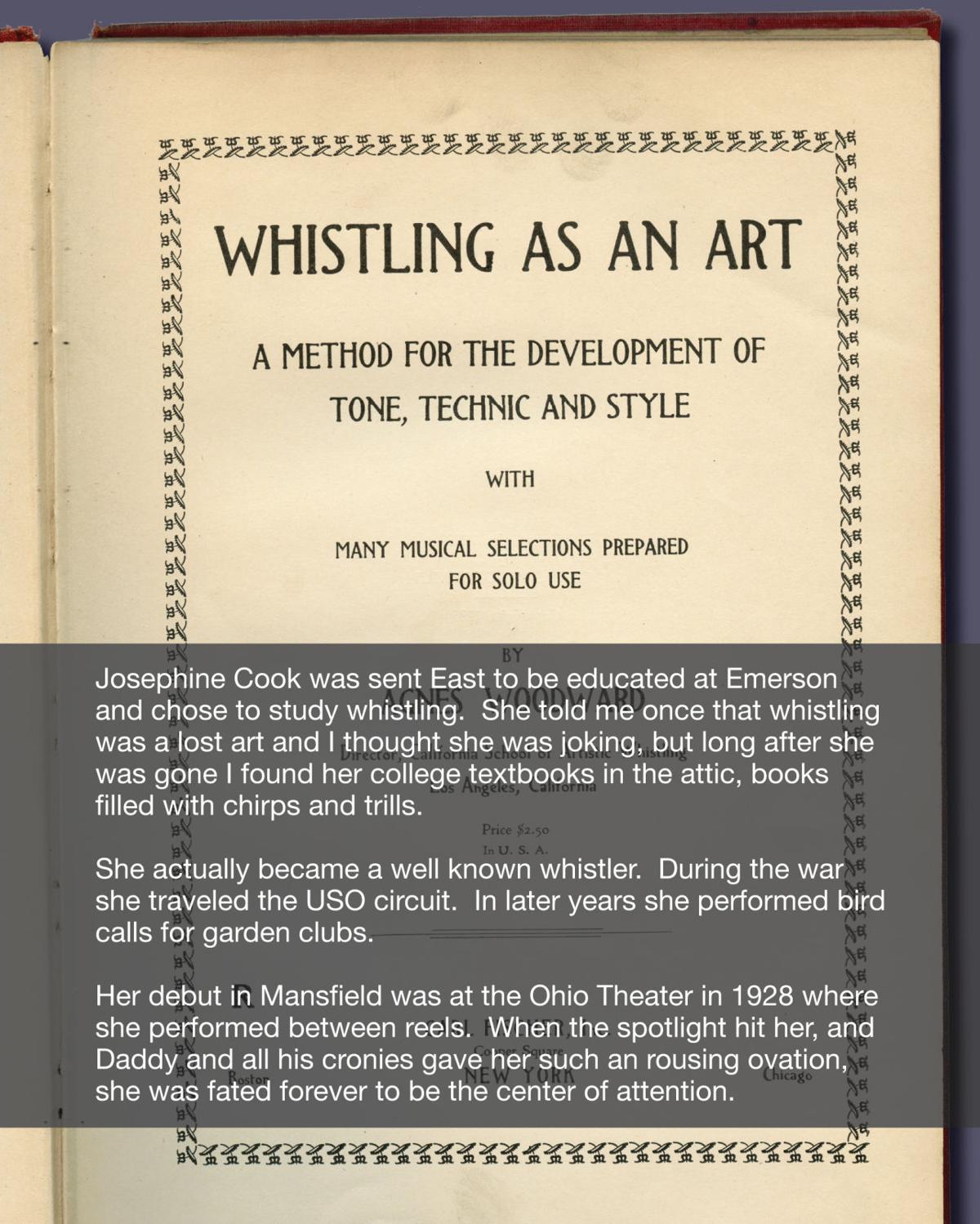 Josephine Cook aspired to be a professional whistler 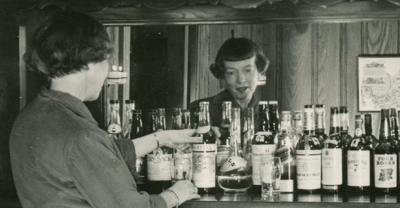 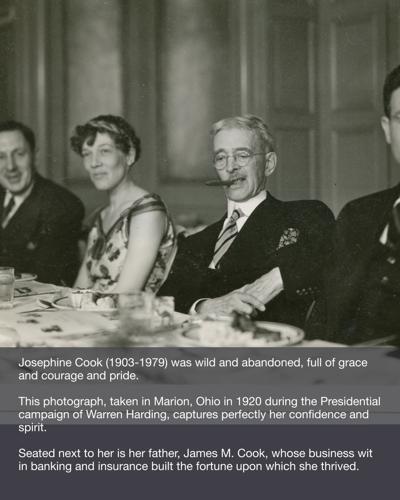 Josephine Cook with her father in 1920 during the Harding Presidential campaign.

Josephine Cook at home on Woodland Road in the 1970s

Josephine Cook aspired to be a professional whistler

EDITOR'S NOTE: This story was originally published in 2015.

Every community has a cast of characters from generations past, whose memory lingers outside the confines of the officially sanctioned local history.

These are the ones whose time on the planet was remarkable not for accomplishments or newsworthy notoriety, but simply because they were so extraordinary, so different from the others of their time.

They survive in memory long after they’re gone because people just couldn’t forget them: They stood out.

The word we use is “eccentric,” a euphemism that implies not only someone’s variable oddity, but also imputes a gently humorous reputation and a forbearing community affection.

I guess that’s why Josephine Cook — though often labeled eccentric — is seldom spoken of today because back then there weren’t a lot of people in town who liked her much. And she was quick to let anyone know that she didn’t give a damn what they thought of her.

She made a life of defying convention. In ordinary circumstances this would have marginalized her as a malcontent or a common oddball, but there was nothing common about Jo Cook. She was spoiled young, inherited a fortune in mid life, and did everything she could her entire life to be the center of attention.

Here’s an example: every year she sponsored the Ballet, and paid to bring a troupe from Butler College to dance with the Mansfield Symphony. Each fall in the 1960s and 70s, there she was in the front row; and the conductor made her stand up in the spotlight to do a little-girl curtsy with a smirk on her face while everyone applauded politely.

Later that night after the show she threw a huge party for the boys from the ballet, the men from the Symphony, and men from local society. None of the wives were invited.

She wanted to be the only woman at the party … it guaranteed she was the center of attention.

It did not improve the way women in town thought of her.

Most people gain perspective in life through the struggles they face while finding their place in the world. Josephine Cook was born at the top of the totem pole, and the view was very different up there.

Her father left her a lot of money and she never knew a day when she couldn’t have anything she wanted. At his funeral she waited until the benediction was pronounced and then danced around the room singing Happy Days are Here Again.

She came from pioneer stock and a long line of historical characters, and her impeccable pedigree insured that the Mansfield elite respected her. Miss Cook was raised in proper society and she knew perfectly well how to behave like a young lady.

She just didn’t want to.

She was at Warren Harding’s house in 1920 when he was running for President, and during one of his front porch speeches she climbed up on the porch railing just to make sure the newsreel cameras distinguished her from the crowd.

There was a childlike frankness about her that was alternately refreshing and horrifying depending on what sort of assumptions you cherished. Her whole life she cut her hair in a little girl’s bobbed bangs, and painted a little round red dot on each cheek like a paper doll.

That was, in fact, her pet name: Paper Doll. It didn’t derive from any childhood plaything, however, that was simply the way it sounds when you get some very drunk person to say Baby Doll.

That very drunk person was her companion, Putty.

Jo met her somewhere down South where they talk with a lilt, and brought her back on the train with the rest of her souvenirs. For three decades they were inseparable, and they tried — for the most part — to behave, but they loved to laugh and Jo’s laugh was more like a bray and not very ladylike.

When Putty died Jo put her on the train and sent her back down South.

The stories of Jo and Putty are sketchy at best because no one around here wanted to talk about it. Suffice it to say that her union brought forth no issue and Miss Cook was free to abandon herself with no thought for tomorrow.

Like the rare blooms which come when a plant is pruned away from its seed, she had the freedom to be colorful. The long line of historical characters who grew her family tree all came at last to rest on the old lady’s couch.

Josephine Cook bowed out of this life very quietly, but the Fates understood that after a lifetime of being center stage it couldn’t all end without some drama. And comedy.

She had a nurse who looked after her in the last days, a man named Gene, who could see very plainly that the end was near because for the first time in her life Jo refused a drink.

The more her life ebbed away the more nervous he got, so he went downtown to a bar to find some courage, and when he returned to her house that night he didn’t want to face the Great Mystery alone so he brought Lloyd with him.

When they came through the door it was so quiet Gene couldn’t bear to look so Lloyd walked to the couch, and when he saw she wasn’t breathing he threw his hands in the air and screamed "She’s dead! She’s dead!"

Keening loudly he staggered back a step, and when his legs encountered a coffee table it made him sit suddenly down. The coffee table was a delicate piece of furniture made of glass and pretty wood, so naturally it splintered beneath him, and as Lloyd scrambled to stay afloat he reached and grabbed the only thing nearby — a wall-length curtain whose rods snapped from the window to let cascade down volumes of satin taking out an end table lamp and a floor lamp at the same time as it billowed atop the wreckage.

When the police arrived a half hour later the living room looked like the scene of a terrible crime. Wherever she was at that moment, Josephine Cook was having the laugh of a lifetime.

Miss Cook was a major benefactor of the Angell Refuge animal shelter, and the Pine Valley Zoo. To this day the estate of Josephine Cook supports the Mansfield Symphony and the Mansfield Playhouse.

There is more information about Josephine Cook in the photos and graphics illustrating this article.  To see them in a gallery just click on any image.