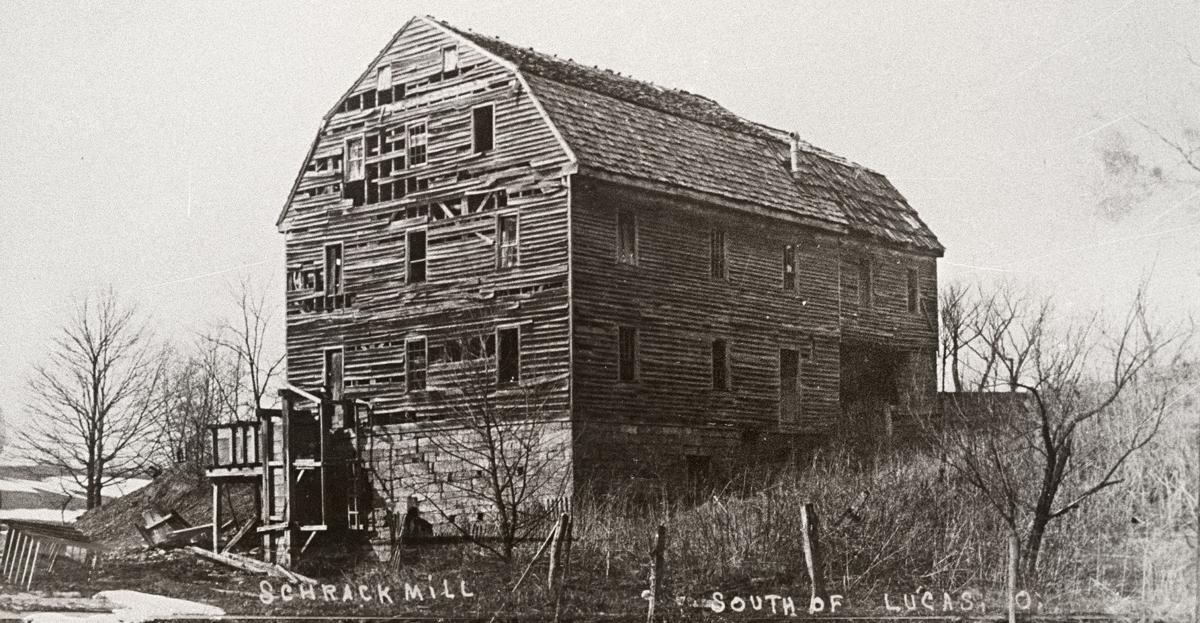 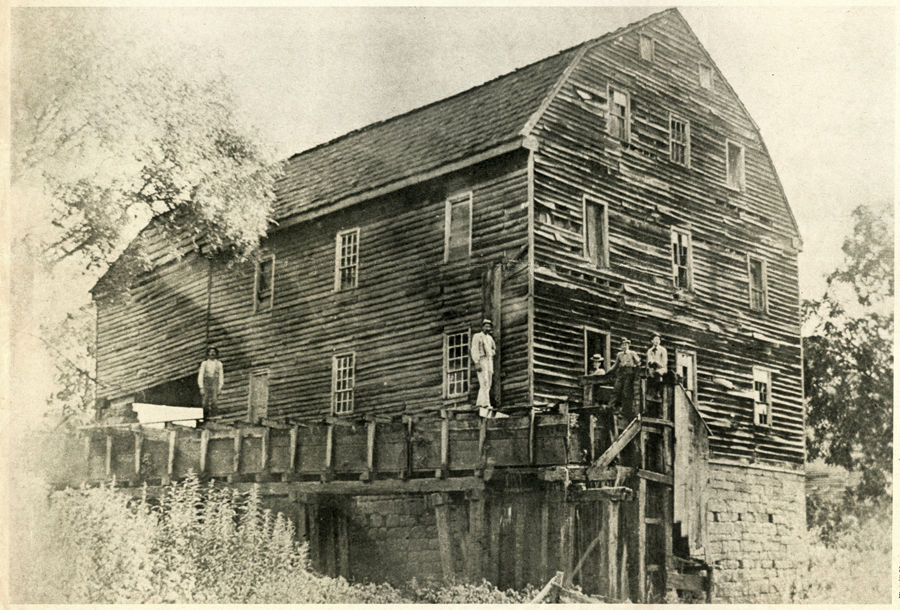 The Schrack Mill photographed from below, its water-bearing wooden sluice easily visible. 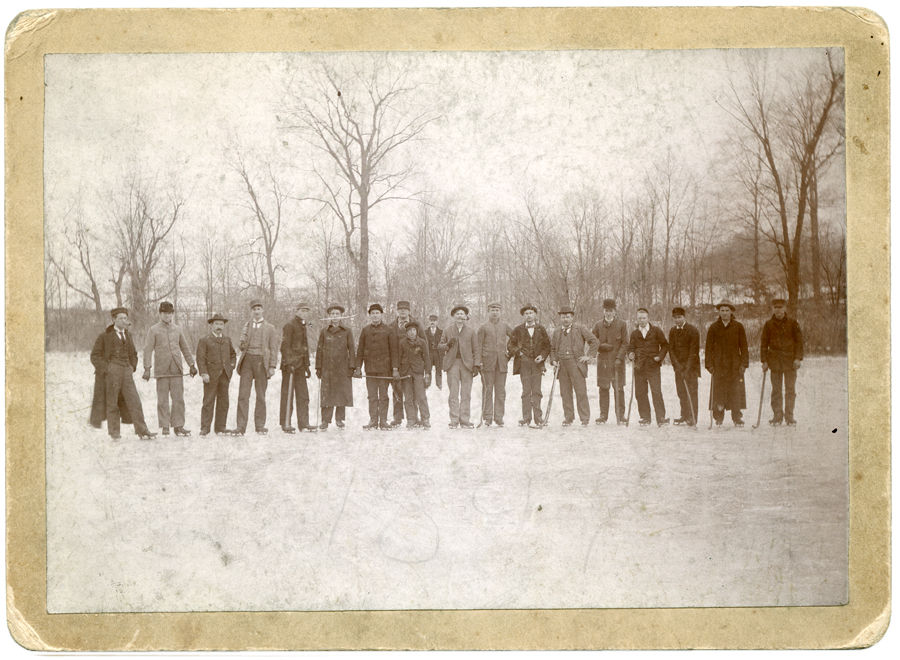 The mill pond at Schrack's was 1.5 acres of ice in 1897 when these Pleasant Valley men improvised a hockey game. 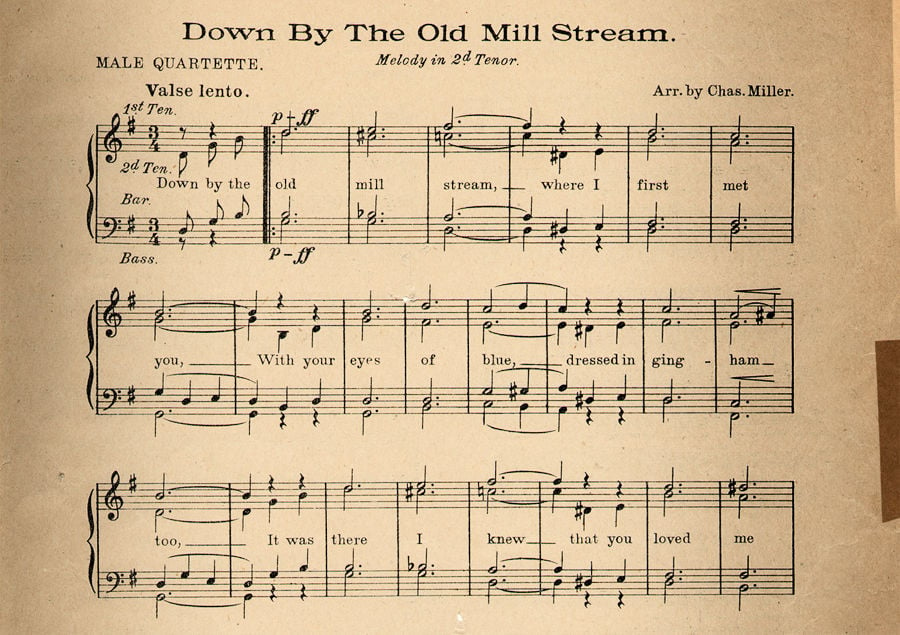 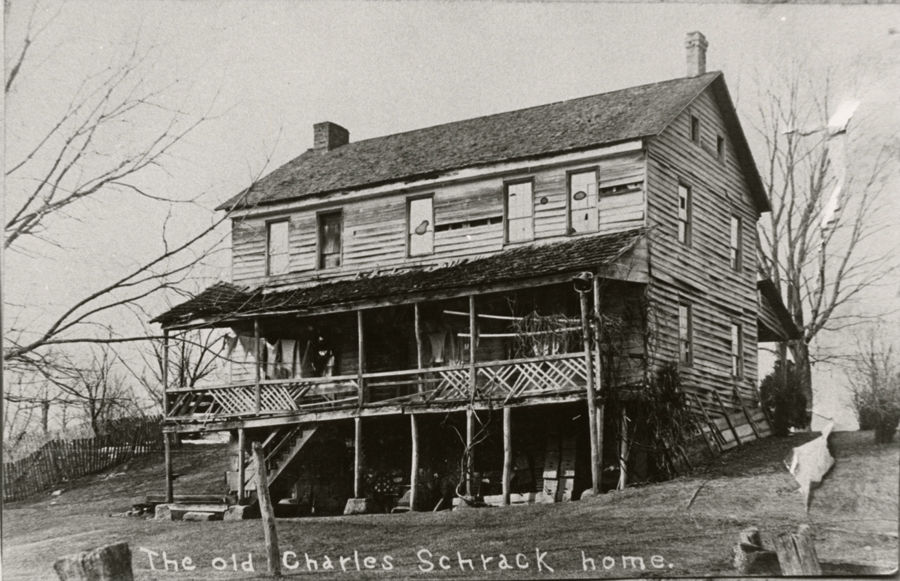 The lower level of Schrack's house served as a general store in Pleasant Valley. 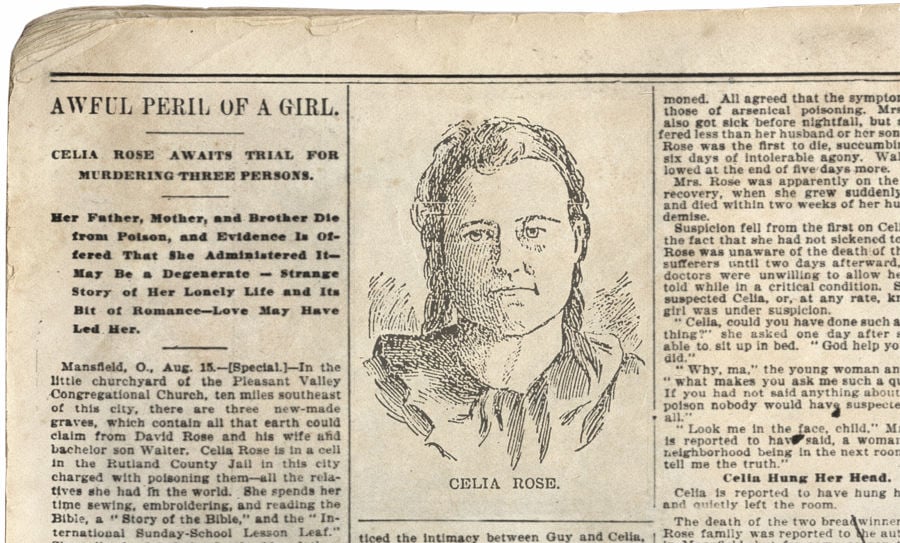 The miller's house made famous by Ceely Rose is on Bromfield Road between the Big House and the Malabar Farm Hostel.  It stands across Switzer's Creek from where the Schrack Mill once operated, as indicated by the shadow in this photo. 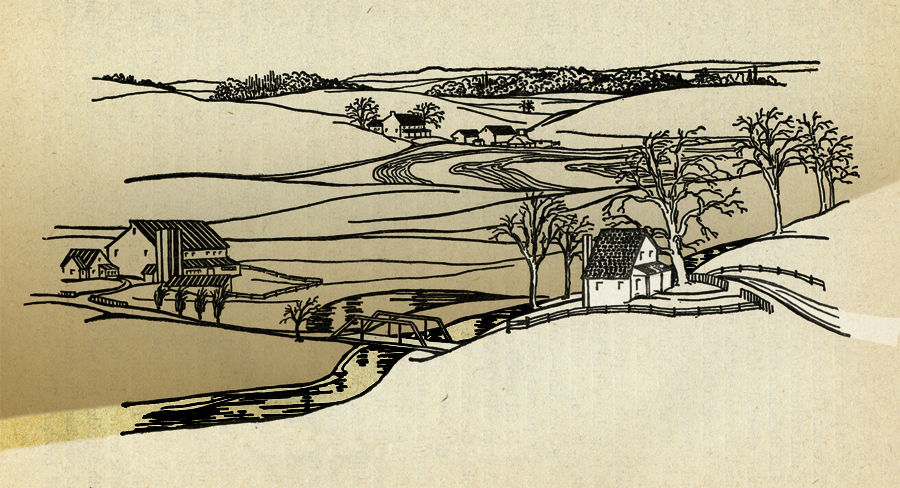 This rendering of the miller's house perched above Switzer's Creek is an illustration by Kate Lord from Pleasant Valley, 1945, by Louis Bromfield. 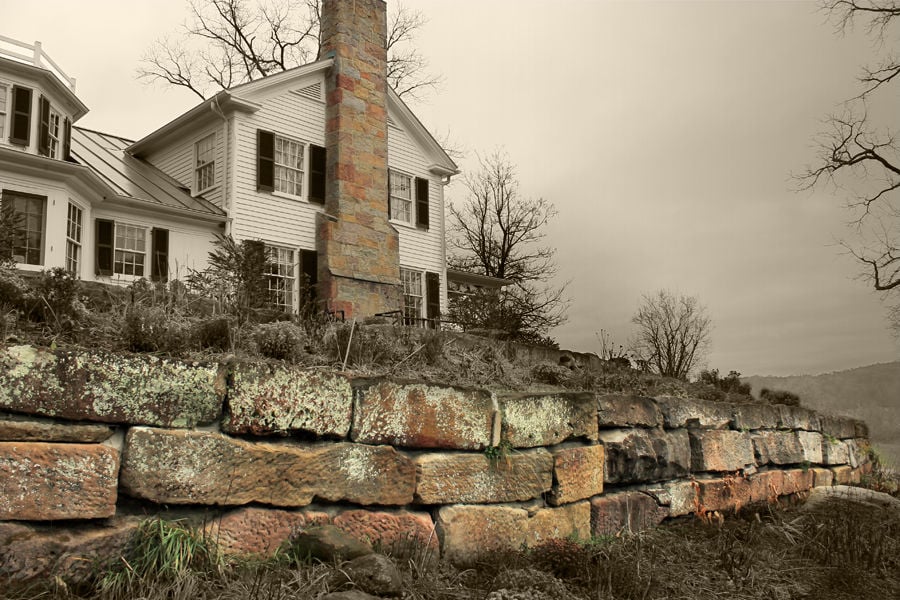 The sandstone chimney on the Big House was built in 1939 from stone that once served as the foundation of the Schrack Mill.  All of this colorful native stone, including the massive walls of the terraced garden, was quarried in Pleasant Valley just down the road. 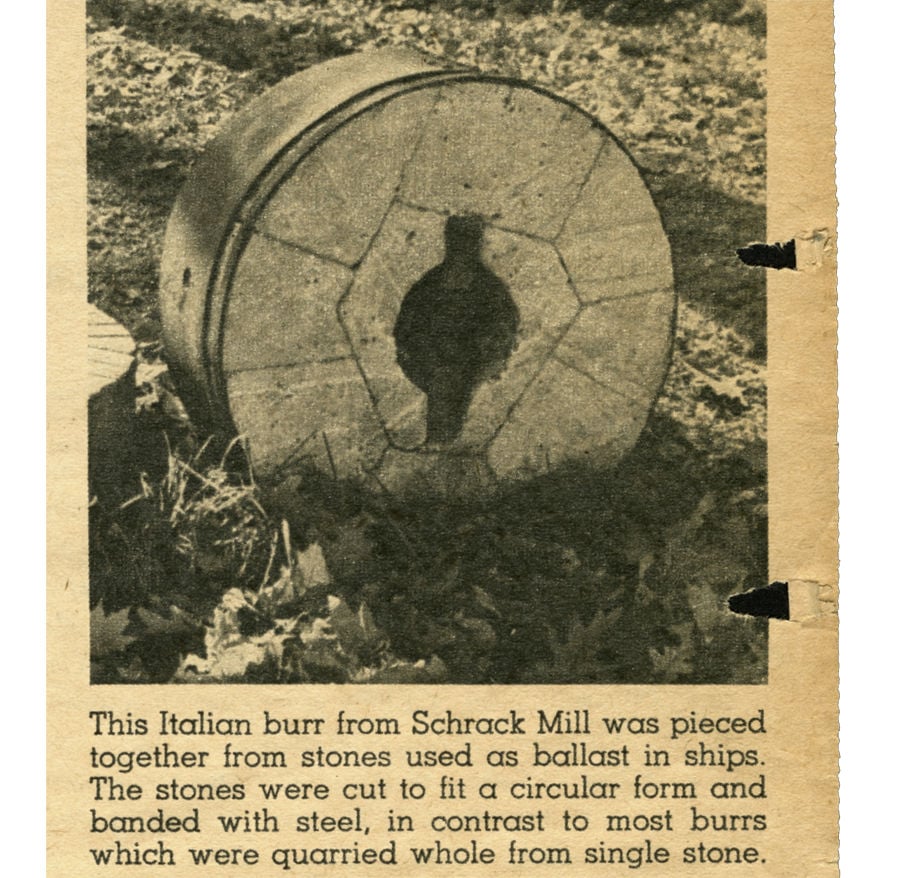 This photo, illustrating a 1960 Columbus Dispatch article by D.W. Garber: The Mills of Malabar; shows a stone in relatively pristine shape at more than 100 years old.  Another of Schrack's millstones photographed today is shown below, mostly buried by the accumulated loam of time. 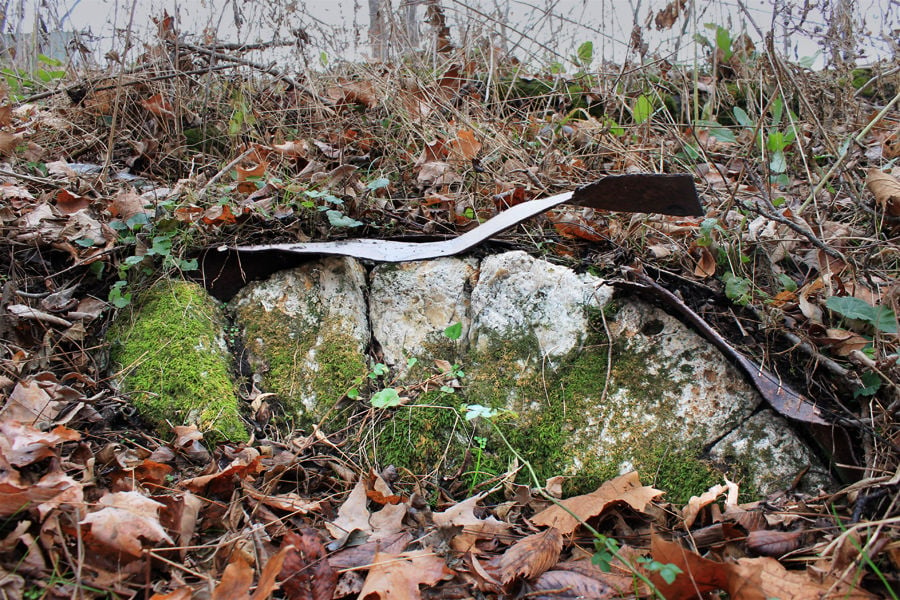 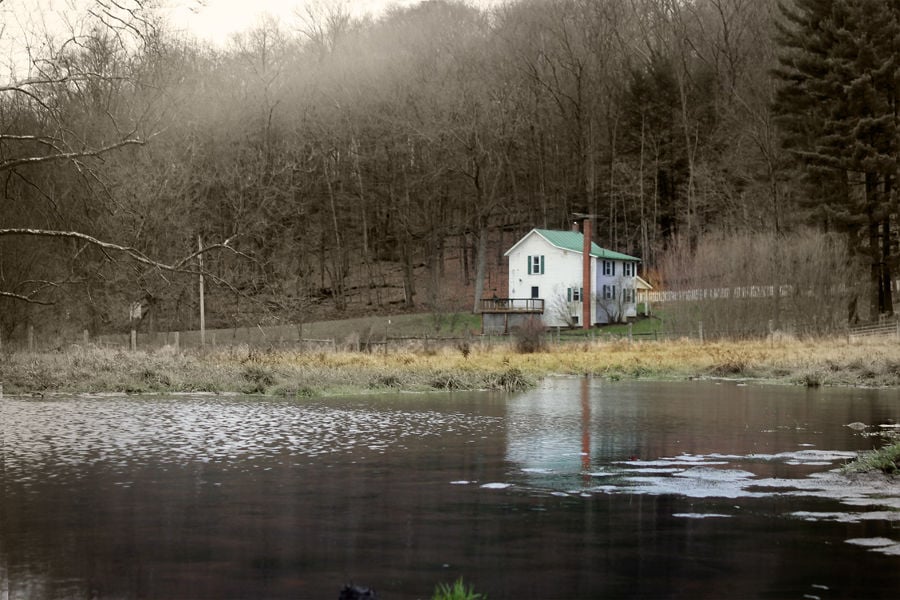 Looking at the miller's house across a shallow puddle where the Schrack's mill pond used to be.

A trip to Malabar Farm State Park is always like opening the pages of history.

The most frequently read chapters in the book are about how this place was an exciting hub of activity in the years from 1939 to 1956: when national attention was pointed at Louis Bromfield because of his best-selling books and movies.

But that was not the first time in history when this specific location was an important center of activity; and it wasn’t the first time when folks who lived on this particular land were in the headlines.

Long before Bromfield came to live in Pleasant Valley and write books drawing attention to American agriculture, this corner of Monroe Township had already been an epicenter of vital concern to local farmers.

And long before Bromfield drew reporters and newsreel film crews to Malabar Farm, an event took place there that made headlines from coast to coast.

The lay of the land

The first time that Malabar Farm became a significant landmark in Richland County happened at the early end of American history. This nation was only 31 years old when Charles Schrack started cutting down the giant oak trees along Switzer’s Creek.

The first thing he built with his massive oak timbers was a home along Little Mountain Road (today Bromfield Road) for his family. The second thing he built was the Schrack Mill.

These two buildings were located in the area where the Youth Hostel stands today in the State Park.

In the early years of the Republic most of the settlers who moved to Richland County left their homelands behind for the promise of rich land…because they were farmers.

The single most important service center for an early American farmer was a grist mill—they needed a way to turn their wheat and oats and barley and corn into something they could eat or sell: the grain had to be ground into flour.

So Charles Schrack’s land became the most visited, most highly valued, popular hub in Monroe Township. In the decades following the 1820s every road led to Schrack’s Mill.

Schrack chose the site in Pleasant Valley because of Switzer’s Creek: the strong stream that raced through the valley toward the Clear Fork River.

In order to utilize that water power to turn his grinding stones he mounded up an earthen dam that ponded water above the level of the mill. From that mill pond the water could be routed through a long wooden sluice to where it would cascade down and spin the turbine.

Two hundred years ago this was common rural technology, and it was familiar to everyone across the farmlands.

The mill pond, and the “old mill stream,” were commonplace and necessary in rural society as malls and parking lots are today in urban society.

As a frequent destination in early county history the mill was vital not only as a center of commerce and labor, but also as a prime recreational facility. There weren’t any civic pools back then, but there were mill ponds.

And in the winter Schrack’s was a tremendously valuable skating rink.

Since it was such an integral center of the community in early farming culture, it was quite natural that Mr. Schrack embraced the opportunity to provide additional services for the folks who converged at his land.

He turned the lower level of his home into a country store. He built a forge and blacksmith shop close by; and at the peak of activity his complex included a second mill pond that powered an oil press mill, and a saw mill as well.

When a farmer went to Schrack’s he could take his family along and they could spend the whole day in one way or another.

In those days there was a school across the field; so most of those school outings found their way to Schrack’s little lake. It gives a whole new meaning to “field trip.”

The valley church was only a mile up stream, and their most common venue for picnics and socials was at the Schrack pond where men could fish and kids could get loud. It was like a park.  Long before Malabar Farm State Park this was already a recreational facility.

So that was how the Malabar Farm grounds became a destination and an exciting hub of activity fully 100 years before Louis Bromfield set foot on the land.

Charles Schrack lived until 1860 and, even after he was gone and the place was operated by other millwrights, it was forever known in the community as the Schrack Mill.

In 1880 the mill came into the hands of a miller named David Rose. He moved his family into the little house across the creek, and he ground grain for 16 years until he died.

David Rose died in 1896 and shortly thereafter his name was carried in newspaper columns from New York to New Orleans to San Francisco. His name was found down in the body of text in all these new clippings however, and it was his daughter who was featured in the bold type headlines.

She was the one who poisoned him.

The tale of Ceely Rose is a classic bit of local lore that has been often told as a bittersweet tragedy, or a mystery, or a ghost story.

There are a number of great renderings of the story: Louis Bromfield’s version in Pleasant Valley, 1945; Triple Murder by Brett Mitchell, 2006; and the drama The Ghost of Ceely Rose by Mark Jordan, 2003, that is performed periodically at Malabar Farm State Park.

With the end of the miller at the Schrack Mill in 1896 the old landmark had few years left to live.

By the time young Lewis Brumfield saw the site as a kid in the early 1900s the grand old grain works had already been dismantled: its giant timbers repurposed to a nearby cow barn.

When he came back in 1939 the boy’s name had been modified to Louis Bromfield and he was a literary celebrity. He bought the old Schrack lands as his Malabar Farm, and he found a new purpose for the ruins of the Schrack Mill.

In 1939 all that remained of the mill was its massive sandstone foundation. Bromfield used the stone to build a huge chimney on the end of the Big House.

In the mist of time

The day I went to Malabar Farm hoping to locate the old mill site was a dark and misty morning. Perhaps the photos suffered from the obscuring aura, but the atmosphere could not have been better for picturing the long ago.

It is much easier to imagine the distant past when the present is blurred.

The mill pond that once provided power to the waterwheels of Schrack’s mill is long gone. The remnants of its earthen dam were bulldozed years ago.

On the entry road that leads to the State Park’s visitor center there is a view across the valley that takes in the stream bed of Switzer’s Creek, the distant miller’s house, and the site of the mill and its pond.

Today this view is a low lying field filled with the footprints of cattle, but a gentle haze settling into the scene makes it easy to imagine it as the surface of the bygone small lake.

And perhaps out of the fog, amidst the lowing of cows, can be heard the distant shouts of Pleasant Valley children cheerfully yelling to each other across the waters at the mill pond of the Schrack Mill.

Robert Carter's excellent book Water-Powered Mills of Richland County, 2016, is the indispensable reference for information about local grist mills.  Photos came from the Louis Bromfield archives, today housed in the Rare Books and Manuscripts Library of The Ohio State University in Columbus.