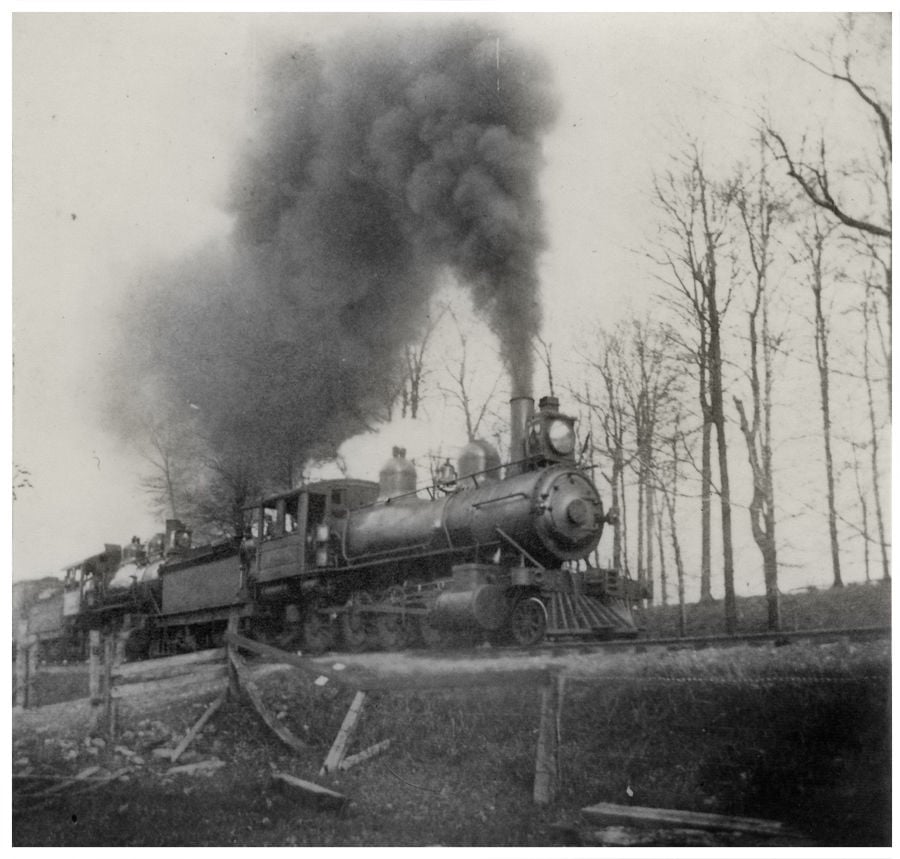 A close look at this photo taken near Alta reveals two locomotives at the front of this train: the designated driver, plus a "helper engine." 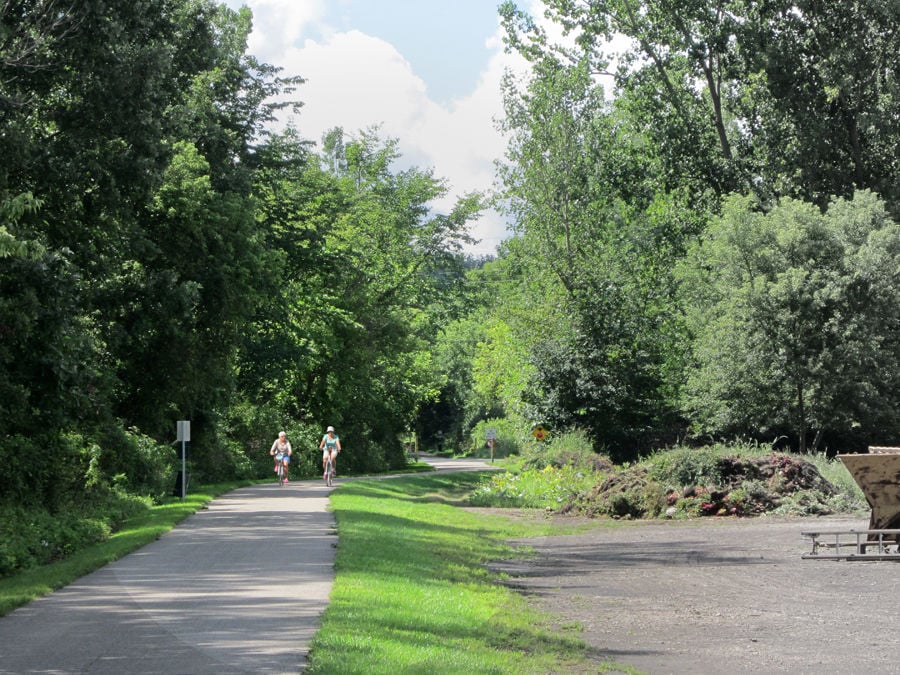 The bike trail pavement deviates slightly to an Alta sidetrack lane established by the railroad. 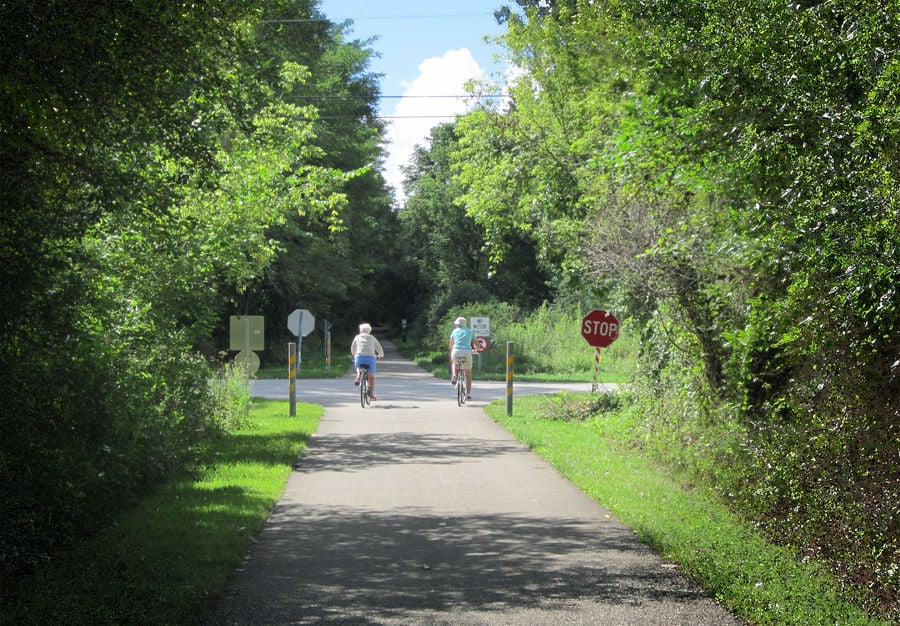 Beautiful downtown Alta is visited every day by many people who don't even know they have been there. 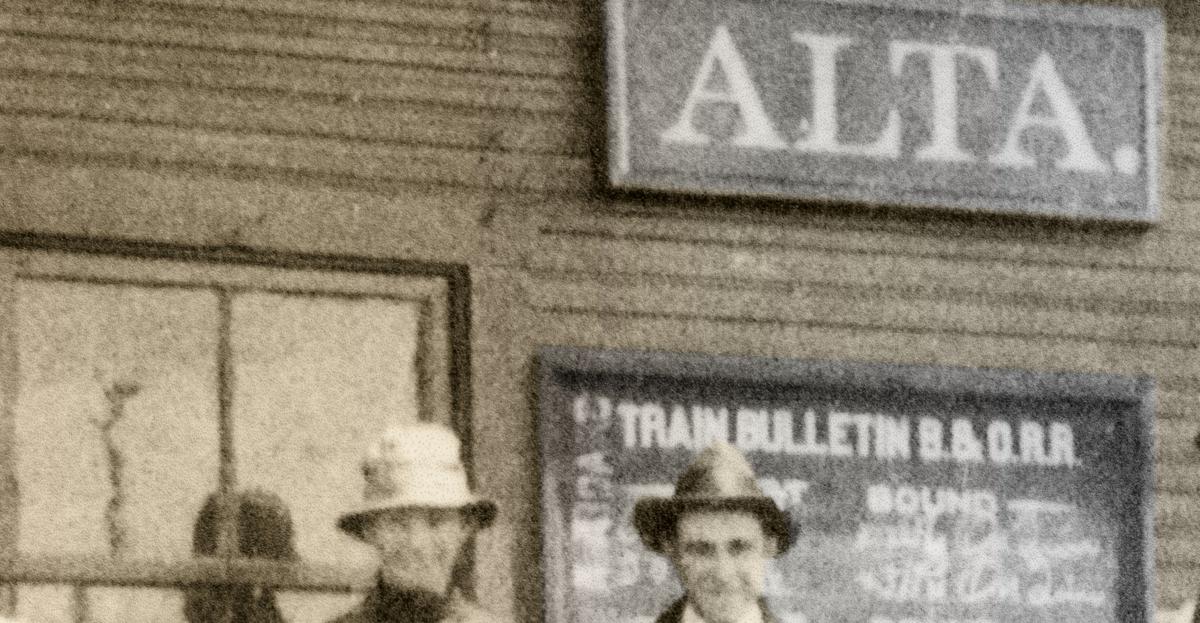 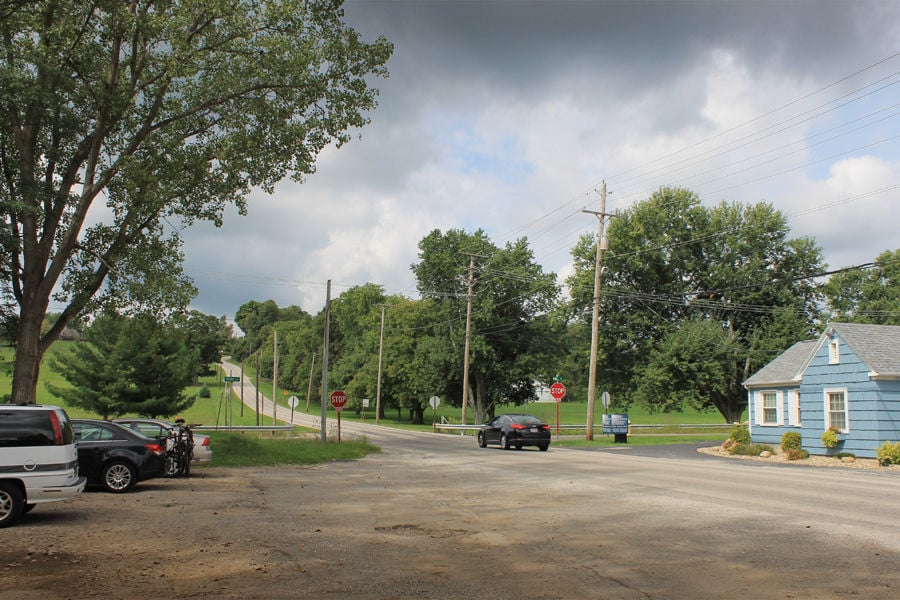 A view of downtown Alta from the bike trail. 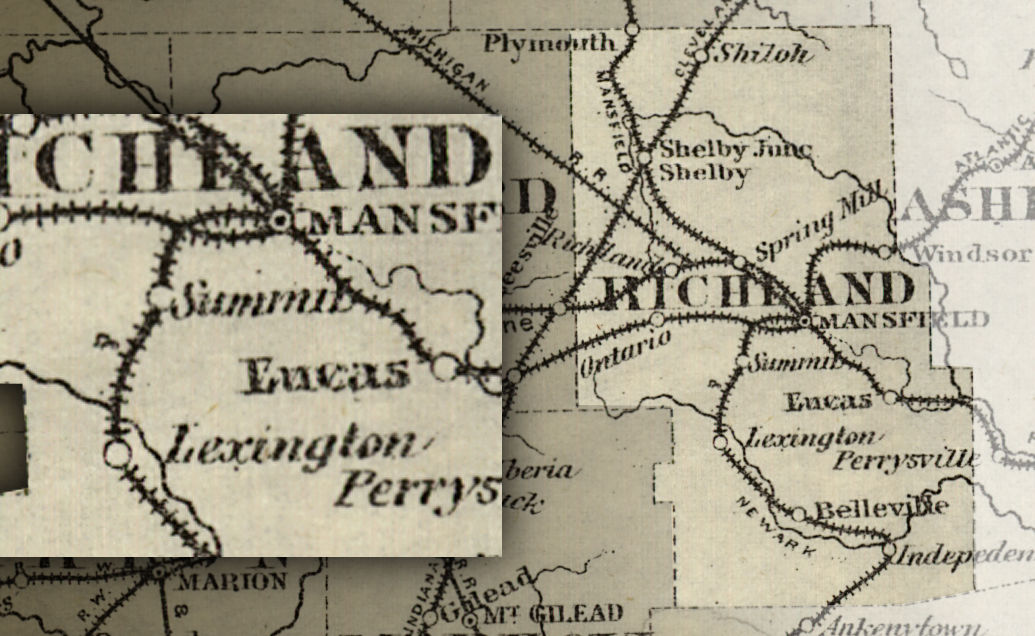 The inset from this 1873 map shows the B&O RR highpoint as "Summit." 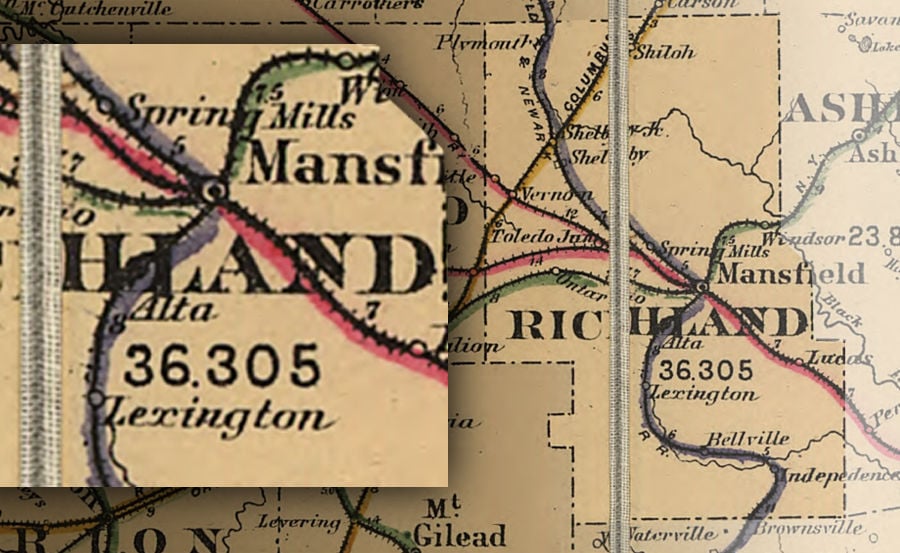 By 1882 when this railroad map was produced,  the tiny station between Lexington and Mansfield was known as Alta. 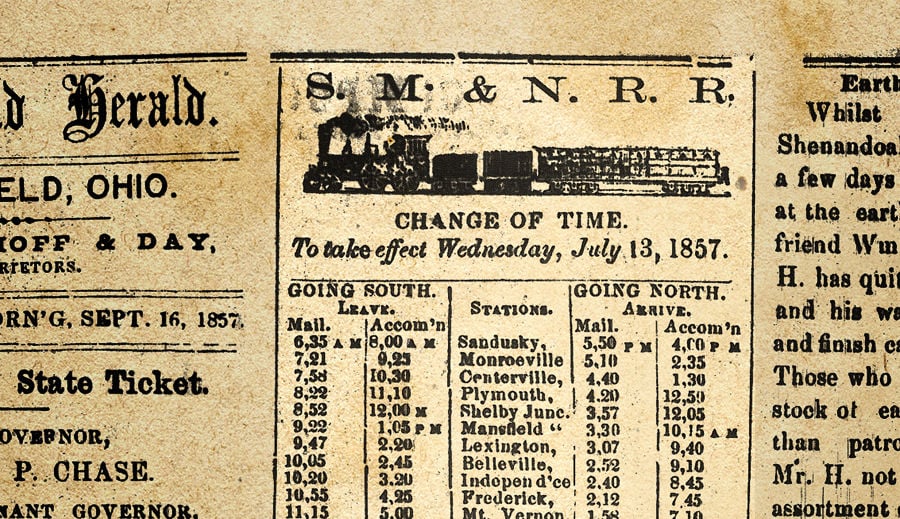 Before it was the B&O, these tracks were laid by the Sandusky, Mansfield & Newark Rail Road. 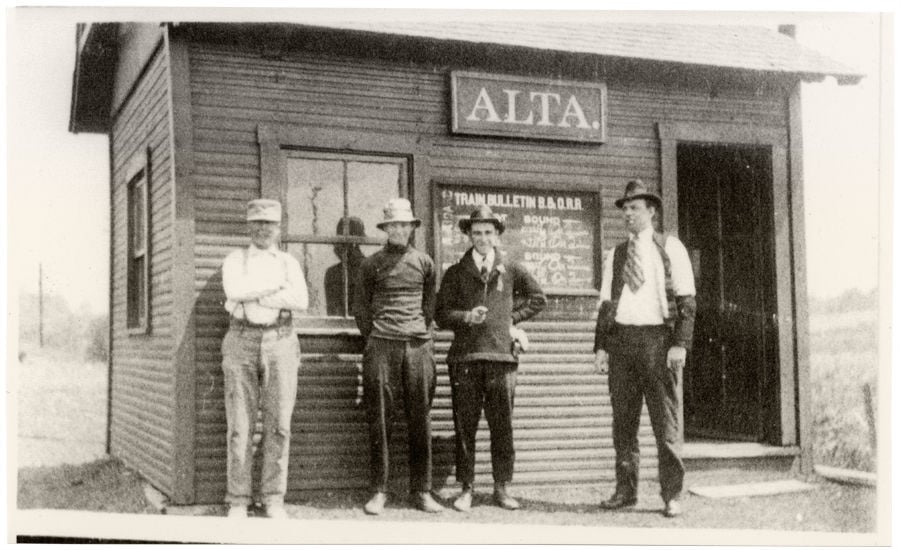 MANSFIELD -- The maps of Richland County from 100 years ago showed a little town about halfway between Lexington and Mansfield, but if you followed the map out there to find the town it could have been puzzling. Because it wasn’t really a town.

It was simply a designation established on the map by the railroad.

It was called Alta, and true to its name — as a corruption of the word ‘altitude’ — it marked the location on the railroad line that was the highest place on their Ohio tracks.

From Alta it was downhill in both directions: toward the southern terminus at Newark; or to the other end at Lake Erie. And from everywhere else on the B&O it was uphill to Alta.

Today those B&O tracks have evolved into the Richland B&O Trail, and the village of Alta is found at the intersection of Marion Avenue and Home Road where there is a bike trail parking lot.

These tracks were originally laid out in the mid-1800s as the Sandusky, Mansfield & Newark Railroad, designed to connect shipping ports on Lake Erie at Sandusky with canal shipping ports in Newark.

The altitude at Sandusky was 597 feet above sea level. At Newark the altitude was 833 feet. In between these two terminuses, in Richland County, the altitude rose to 1,292 feet.

At the high point the railroad required a special arrangement of side tracks so trains could accommodate extra locomotives. The most heavily loaded trains needed ‘helper engines’ to tug their weight up the steeper grade, and these extra locomotives needed a place at the top to turn around.

That place was the summit. It was the summit of the Continental Divide as far as the railroad was concerned, and this particular turnaround began its life on the map designated as Summit Siding in the 1870s.

If you took a trip to visit Alta back then you wouldn’t find anything like a Main Street, churches, schools, or those things that constitute a village. There was only a tiny little depot that named the place.

And it had a little general store for a couple generations.

But there was nothing like a Mayor of Alta or anything like that. They did have a rifle club. The marksmen of Alta met once a month or so to shoot targets and make noise.

They also had a baseball team called the Alta Lumbers. You might assume their name referred to their prowess with the bat, but that is only if you hadn’t been to Alta and seen the most prominent feature of their greater downtown area.

During the 1930s every major industry in Richland County fielded a baseball team in the Industrial League. There was only ever one industry in Alta: it was the lumber yard.

If you park your car in Alta to get on the Bike Trail, your car is sitting on the site of the Alta Lumber Co. They made roof trusses for pre-fab houses until the place burned and the factory moved to Lexington.

It was a pretty big operation for a while, and the headquarters for the company was across the road in the little building that is New Directions today.

Most people who have heard of Alta know it for the famous greenhouse that has been there since 1923. Alta Florist and Greenhouse occupies the site where the little depot once stood.

If you walk out behind the greenhouse and look at the Bike Trail it is evident that the pavement of the trail makes a slight jog to the side as it passes through greater downtown Alta. That slight detour is the only evidence left in the 21st century that Alta was once a significant railroad center.

At the place where the pavement veers it goes on to the Alta sidetrack—exactly the same as the B&O’s ‘helper engines’ did 100 years ago.

The other significant feature at Alta easily seen from the Bike Trail is the great Alta swamp.

While you’re admiring the scenic wetlands there, turn around and look at the area where you’re standing. If you observe the terrific basin of hills and valley that surrounds the Alta landscape, you will appreciate a small forgotten historic twist of fate: that you are above water.

The Alta valley was once seriously considered as the site for the reservoir to provide Mansfield’s water supply.

Ultimately the dam was built closer to Lexington creating the Clear Fork Reservoir, but the first plans drawn in the process placed the dam so that Alta would be under the lake.

In some alternate universe the Bike Trail is a boat trail.

Alta was remembered by the old SM&N RR engineers because of an angry farmer who lived there in the 1860s.

The hapless man had lost a crop one year due to a B&O locomotive.

In order to ascend the uphill grade those old steam locomotives had to superheat their engines with extra coal, and apparently sparks had flown out of the redhot smokestack and ignited the farmer’s hayfield.

He sued the railroad repeatedly but could never get a judge or a jury to see things his way. So one night in frustration he went out to get even.

The farmer’s retaliation was accomplished with a stiff brush and a large can of grease. What he did was grease the tracks for several hundred yards in Alta.

The next train that paused at the summit siding to unhook its ‘helper engine’ that night missed all of its later scheduled stops because it was stuck in Alta spinning its wheels.

This story owes much to the kindness of Bob Carter.  He is the caliber of historian any community in America would be fortunate to have: full of stories, eager to share.  It is our good fortune that he grew up here.

Bob has written a number of excellent books documenting Richland County history.  Most recently: Water-Powered Mills of Richland County (2016); The Mansfield Riots of 1900 (2009); Tom Lyons, The Indian who Died 13 Times (2003).

For purposes of this article: The Sandusky, Mansfield & Newark Railroad: Early history of the Lake Erie Division of the B&O (2002).