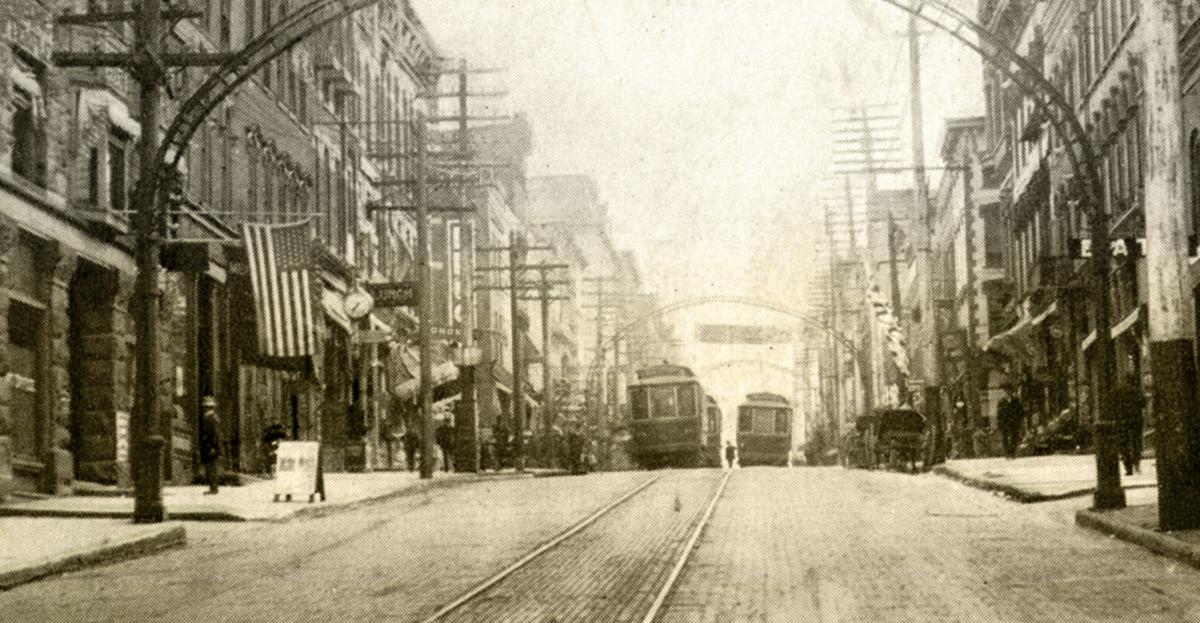 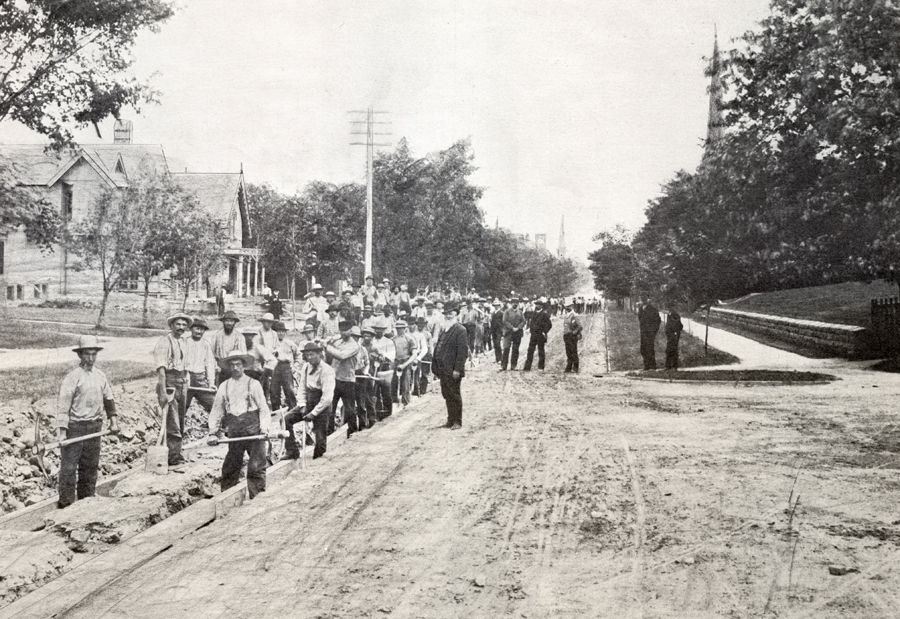 Laying the streetcar tracks in 1887, this photo was taken on Park Avenue West facing east from Sturges Avenue. 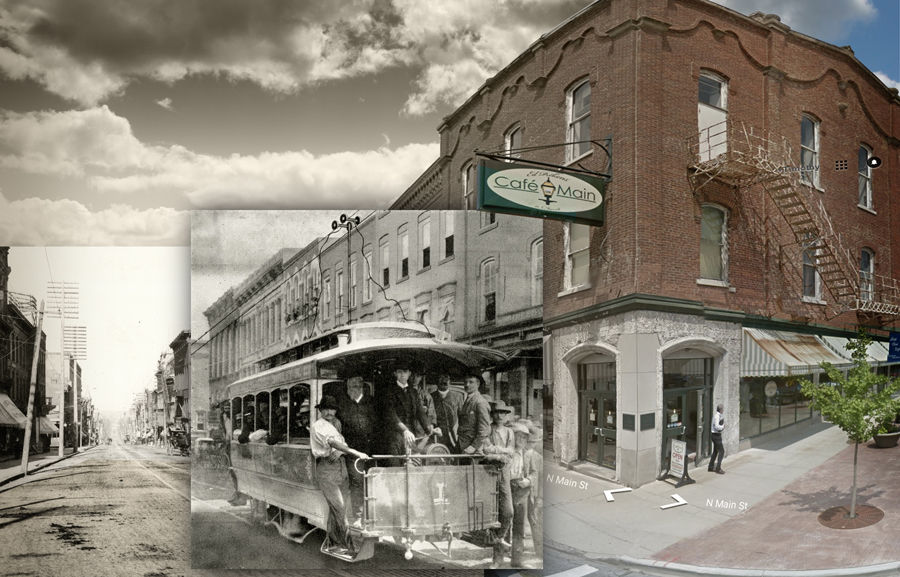 The photo of Mansfield's first trolley, taken on August 8, 1887, is superimposed over a comparable view down Main Street in 1894, and a Google view of the same site today. 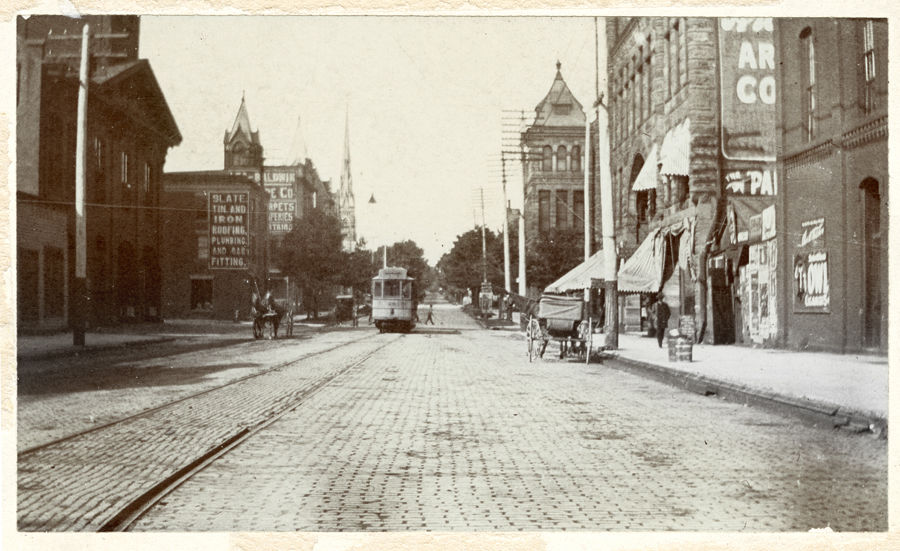 This image of a streetcar on Park Avenue West was made after the street was paved.  When the lines were originally laid all the streets were surfaced in dirt. 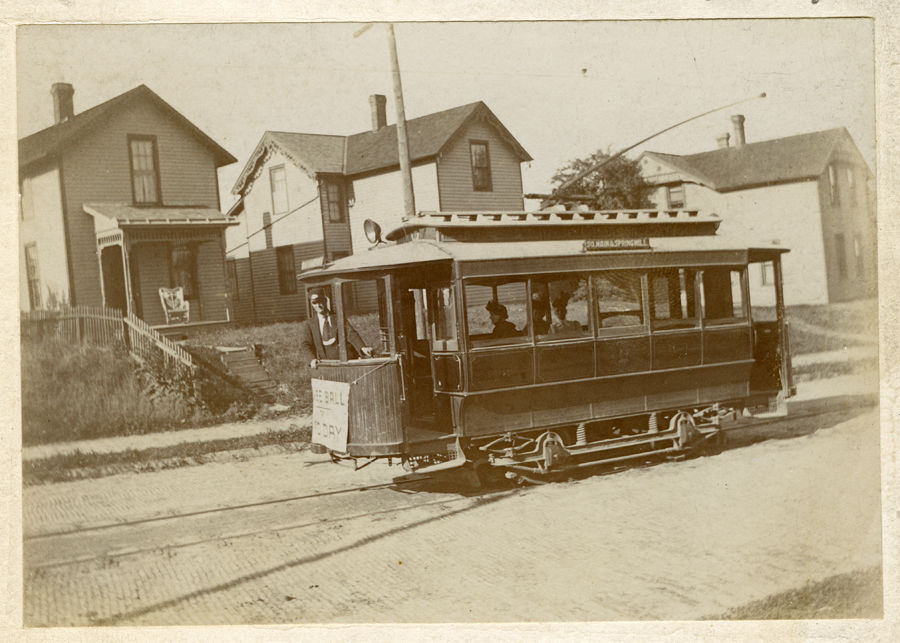 This summertime open air streetcar was photographed on Springmill Street near the fairgrounds. 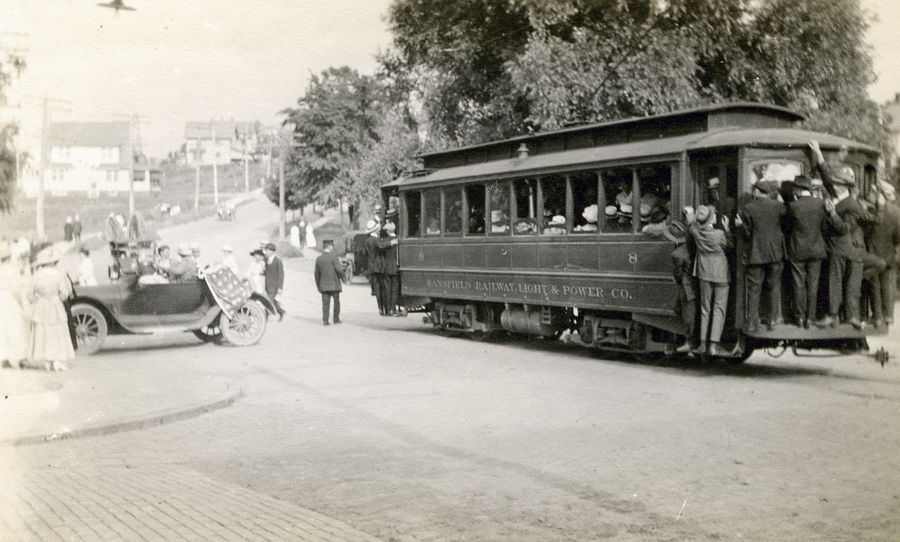 This streetcar photo captures an excited group on West Fourth Street at the entrance to North Lake Park. 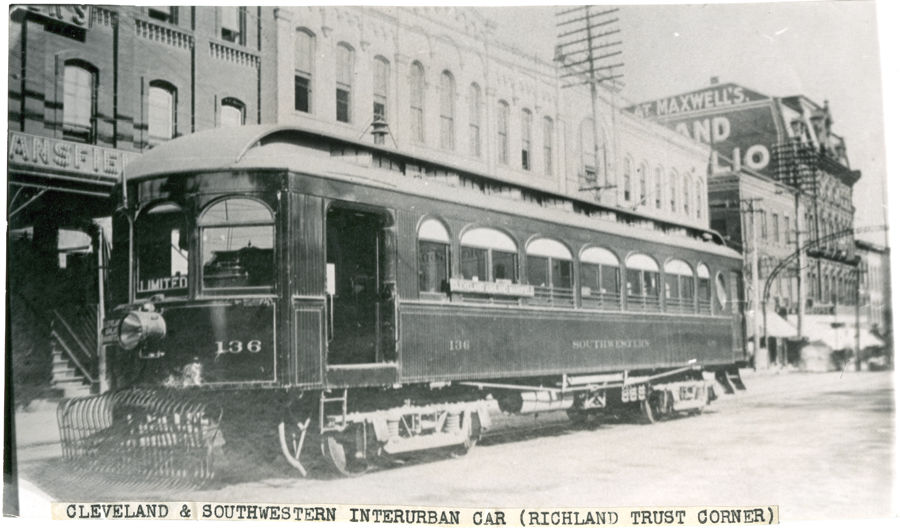 Mansfield's first Interurban station was on the northwest corner of Main Street and Park Avenue West. 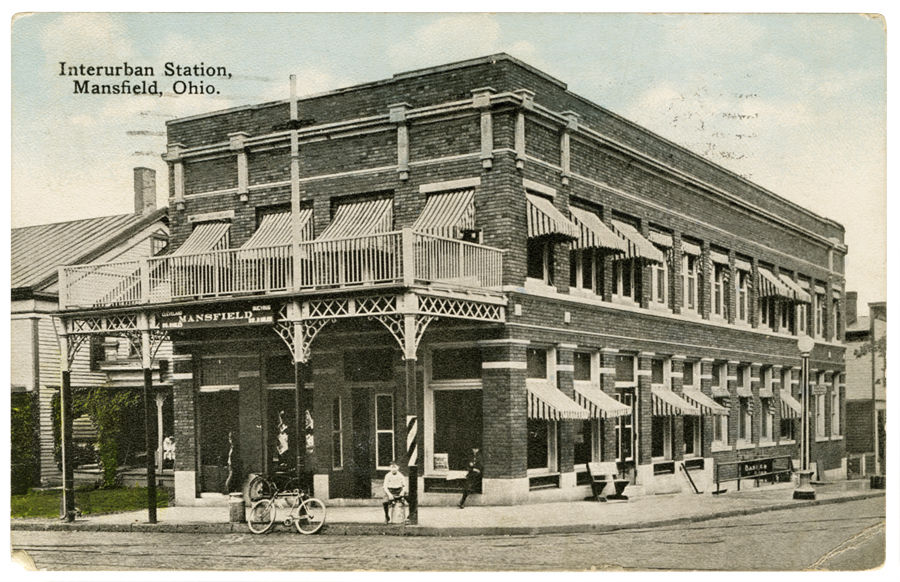 Mansfield's Interurban station built just for that purpose was at the corner of East Third and Diamond Streets. 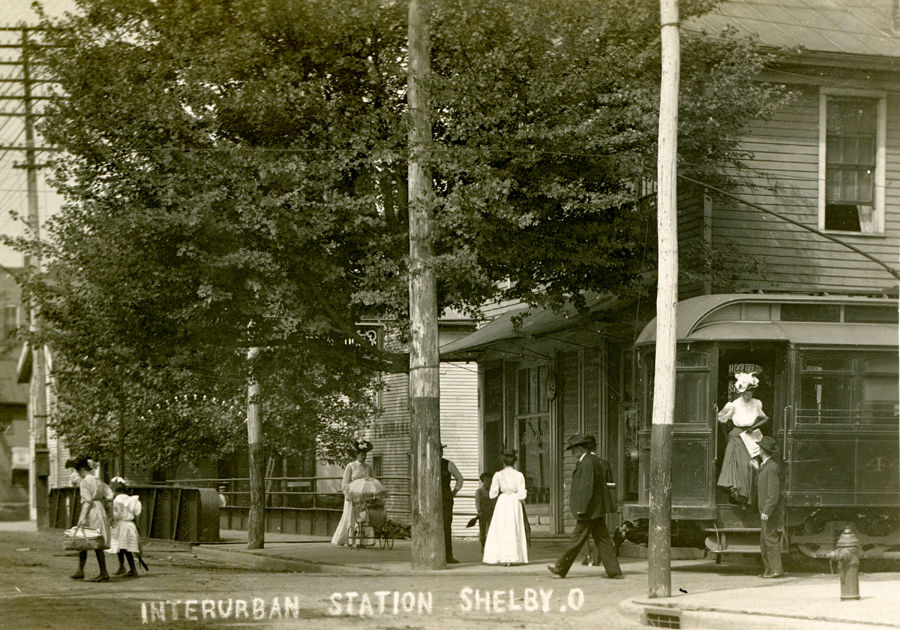 The Interurban stop in Shelby was on East Main near the Black Fork bridge. 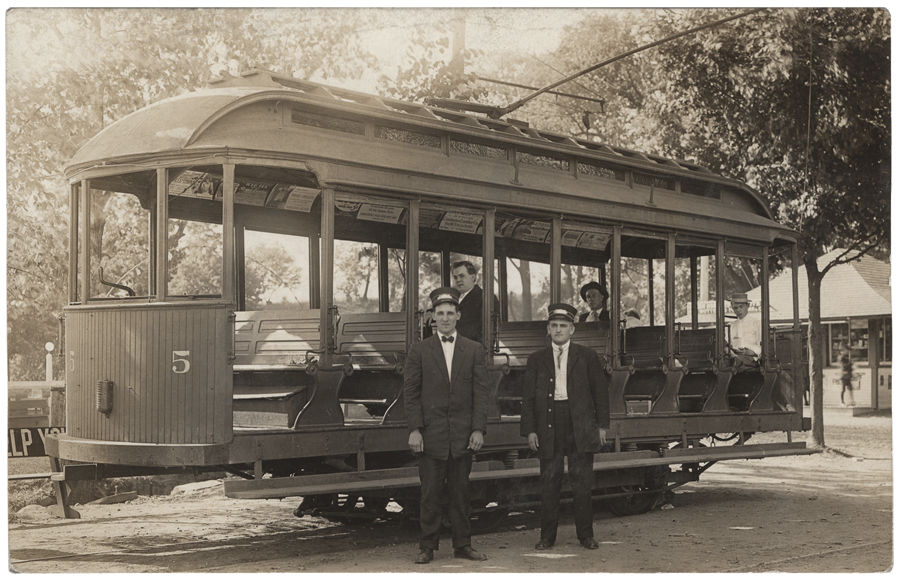 One of the charms of an excursion to Luna Park was getting there by a breezy trolley ride.  Here the streetcar pauses in the park. 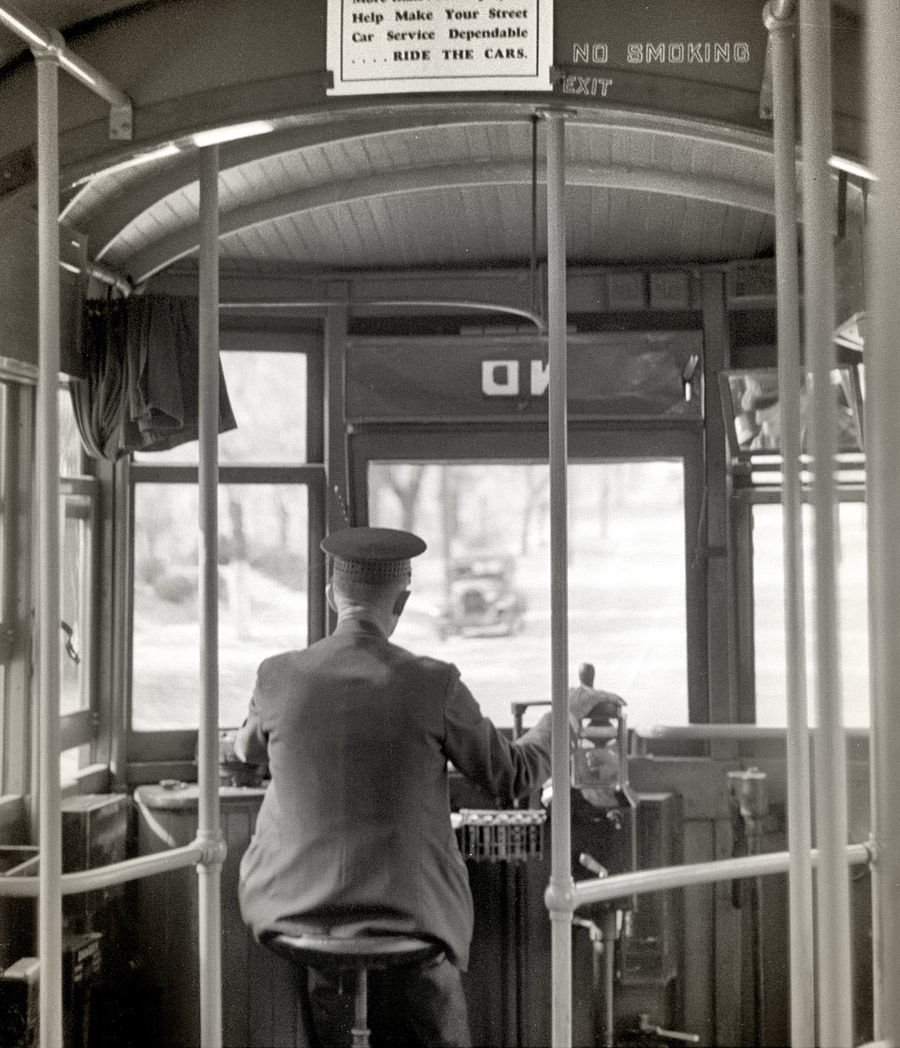 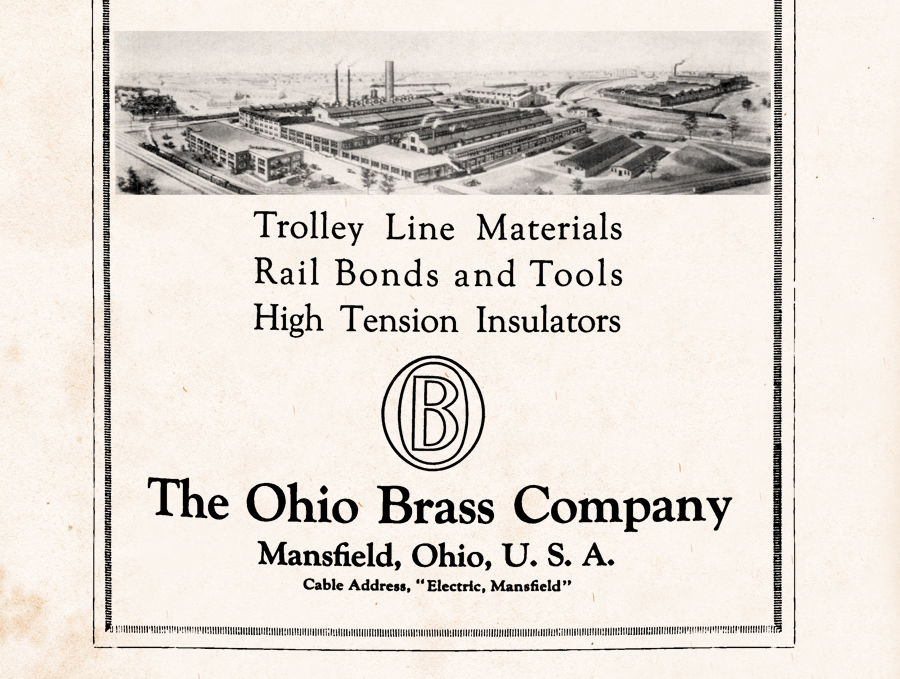 A catalog of the Ohio Brass Company. 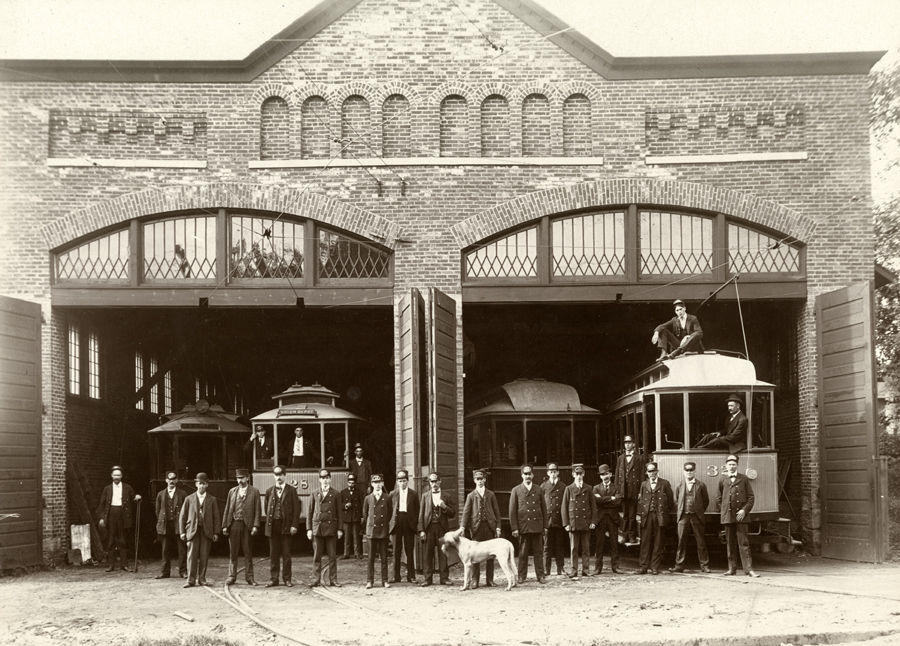 The car barn for trolleys of the Mansfield Railway Light and Power Company was located on East Fourth Street.

We had one of the first electric trolley systems in the US, but more importantly, we manufactured the electrical mechanisms that made it possible for streetcars to run all over the country.

In many significant ways it was the age of streetcars that built the infrastructure of our city. The timeline of electrical rails started for us in 1887 and it ended in 1937. Those 50 years were quite a ride for folks in Mansfield: gliding with the summer breeze, and humming down the street on an electrical current.

In the decades before the electric tracks were laid for streetcar lines, Mansfield had a public transportation system that relied on a different kind of horsepower: horse-drawn buses.

They trotted up and down the streets connecting the city’s hotels to the railroad station, courthouse, fairgrounds and ballparks.

In the 1870s and 80s some other cities had special rails embedded in their streets to facilitate traffic flow for these horse-drawn ‘omnibuses,’ and Mansfield was considering the possibilities of similarly modernizing its downtown streets.

Before the tracks were laid however, a new upgraded version of this technology emerged: self-propelled omnibuses.

These new vehicles were driven over the omnibus tracks by electric motors: moving faster, requiring no horses. It represented a quantum leap in the scientific application of technical progress in an age of electricity that was slowly overtaking the age of gas lighting and steam energy.

It was instantly recognized as the cutting-edge urban amenity that could transform Mansfield from a quiet country town into a thoroughly modern city.

To folks on the street—women in long skirts and men in spats—the prospect of moving through the thoroughfares of town riding atop the mud seemed the acme of civilization.

The tracks for this new electric transportation system were laid initially on Main Street and Park Avenue West during the summer of 1887. The lines spanned 4.5 miles of city blocks.

As a brand-new technology, the engineering challenges of making the whole system of rails and wires function correctly was a frustrating progression of fits and false starts.

A number of successive dates were announced in the papers when the first trolley would appear, and each time crowds gathered on Main Street sidewalks hoping to witness history.

It finally happened on August 6, 1887, when Mansfield became the 4th city in America to successfully plug electric trolleys into public use.

The first cars used here were those constructed originally for use as horse-drawn vehicles—modified with 15 HP electric motors.

There were two primary fears that folks in town faced in resistance to the new world of electric transportation. For one, it was commonly assumed that streetcars in traffic would terrify horses in the street. This proved to be not so. Most horses couldn’t have cared less.

The other worry to be addressed was more of an electrical nature: it was commonly believed that passengers who carried pocket watches would lose time when the current of the electrified rails underfoot and the supercharged wires overhead magnetized their time pieces.

Experiments, requiring finely tuned watches, were conducted and carefully monitored in the daily news until gentlemen were assured their time was safe.

Within very few years there were tracks laid all over town, connecting the major hubs of city activity.

Clever kids who could acquire a 5¢ trolley ticket, and knew the correct sequence of transfers, could spend the whole day riding around in the breezy open cars.

The best loop ran out Park Avenue West as far as South Park, then down Linden Road to Casino Park; then back downtown by West Fourth Street.

Lines ran to the fairgrounds out Springmill Street; to OSR and out Grace Street; and down South Main clear out to the cemetery.

There were generations of Mansfielders who grew up spending their summer free time simply traveling the city circuit on trolley picnics.

After the city lines were all in place, the next priority in Mansfield was connecting a streetcar passage to Shelby. Aside from Shelby’s attractions for shopping and recreation, it was important to have access to their railroad depot where major US trunk lines stopped that bypassed Mansfield.

These cars that ran between cities were called ‘interurban’ streetcars, and during the height of their prominence they connected Mansfield into a network of local towns and major cities.

Mansfield had its own interurban hub station for several decades: first on the Square, and then on Third Street.

Interurban service to Shelby began in 1901. The route ran north on Bowman Street to the steel mill, and then paralleled the Pennsylvania Railroad tracks. There were 22 stops between Mansfield and Shelby, and a round trip cost 45¢.

Almost simultaneously as Mansfield’s streetcars were first sparking around downtown, there was another city institution that was just powering up. It was a foundry on North Main Street that made brass harness fittings for various horse-drawn vehicles.

All they had to do was look out their front windows and watch traffic to recognize that the horse-drawn era was fading away and the age of electric transportation was gaining traction.

So they retooled their processes and products, to begin manufacturing all the various components, insulators, bolts, brackets, rails, wires and clamps that went into electric streetcar lines.

And then they rode the wave that powered the US streetcar era for the next several generations as the Ohio Brass Company.

There is virtually nothing left of the Ohio Brass Company today except an office building too nice to tear down, that carries its name as a memorial.

The products it manufactured have been made obsolete through the evolution of technology, enough to virtually drop all trolley words from the vocabulary of the 21st Century.

Nearly all of its players in the game, from the pawns right up to the king, have long ago left the board.

Yet Ohio Brass remains to this day.

It is seen in the streets and water lines and sewers built with the revenue generated from the company and its employees; in the neighborhoods and homes built from 1888 to 1990 by people who earned their living at the Brass.

It exists today in Kingwood Center, built by a man who built the company; in the city’s hospital, launched from the civic generosity of Frank Black who founded Ohio Brass; and in the Discovery School and the Art Center that came from his family after he was gone.

In so many ways the Ohio Brass Company, though it is long gone, is still a living vibrant pulse in our town.

And it all started with Mansfield’s streetcars.

In 1937 the last streetcar made a run out Park Avenue West with a few melancholy dignitaries and old folks, and the next day public transportation transferred to the city bus system.