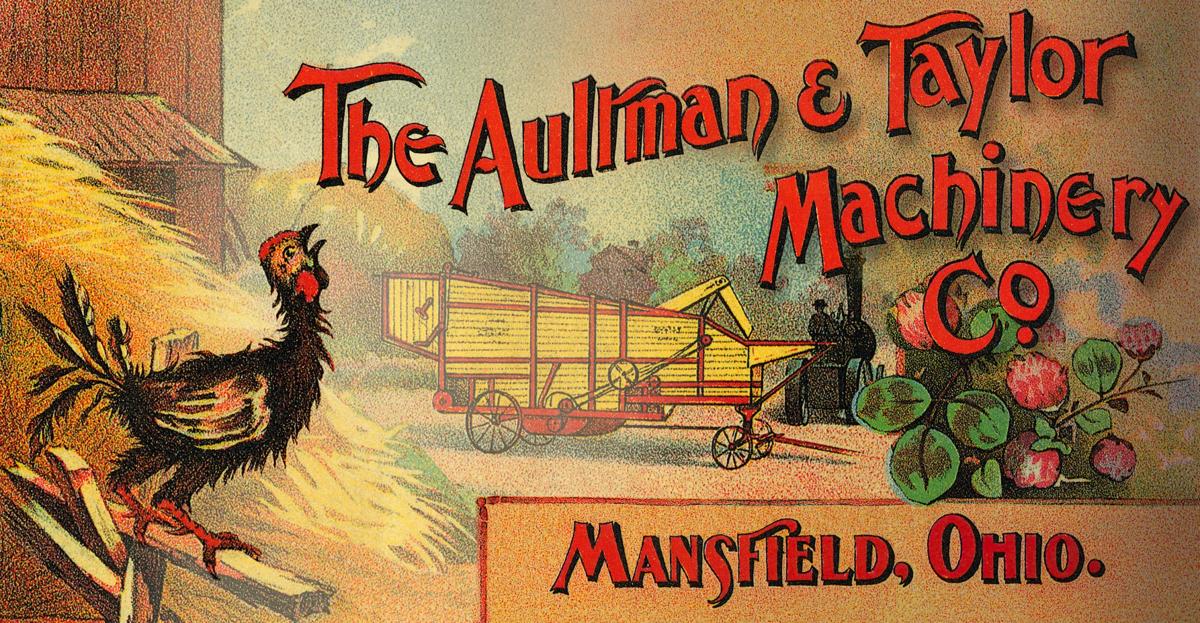 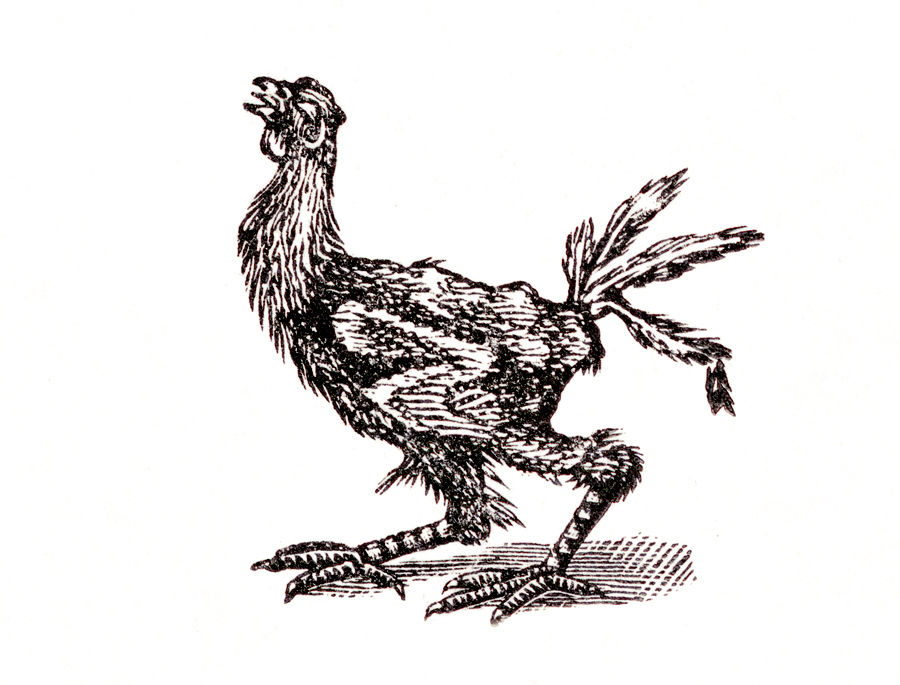 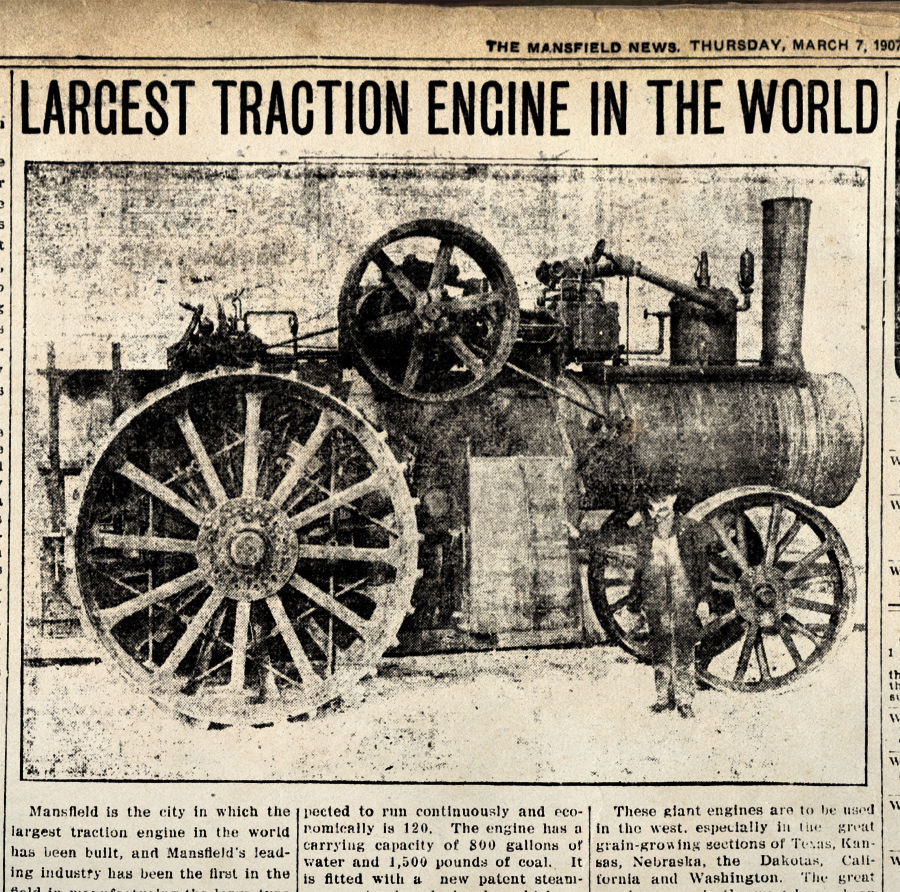 In 1907 the Mansfield plant fabricated this steam powered traction engine: big enough to pull huge gangs of plows, and rated at 100 horsepower. Designed for huge western farms, the machine was one of a kind, and sold to a massive Faulkton, South Dakota wheat farm. 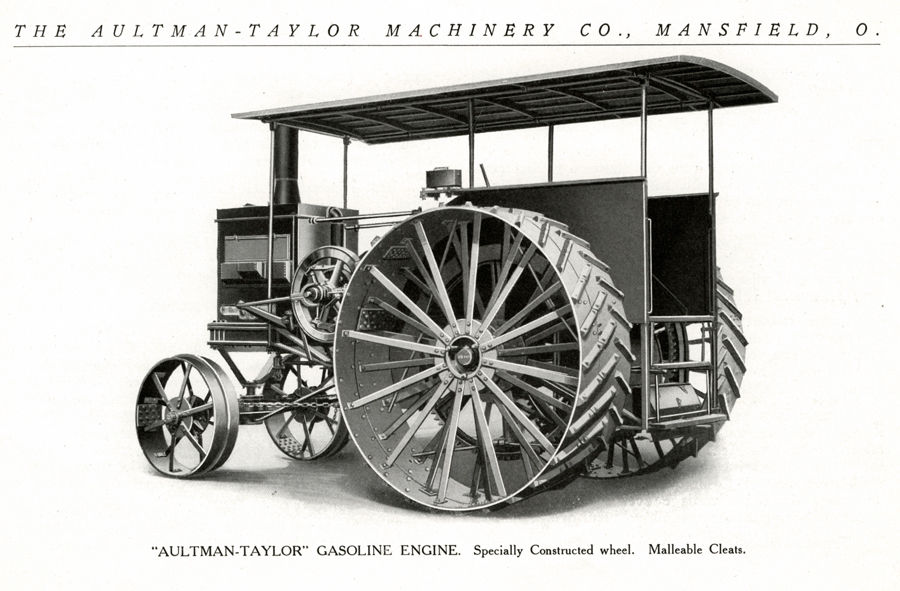 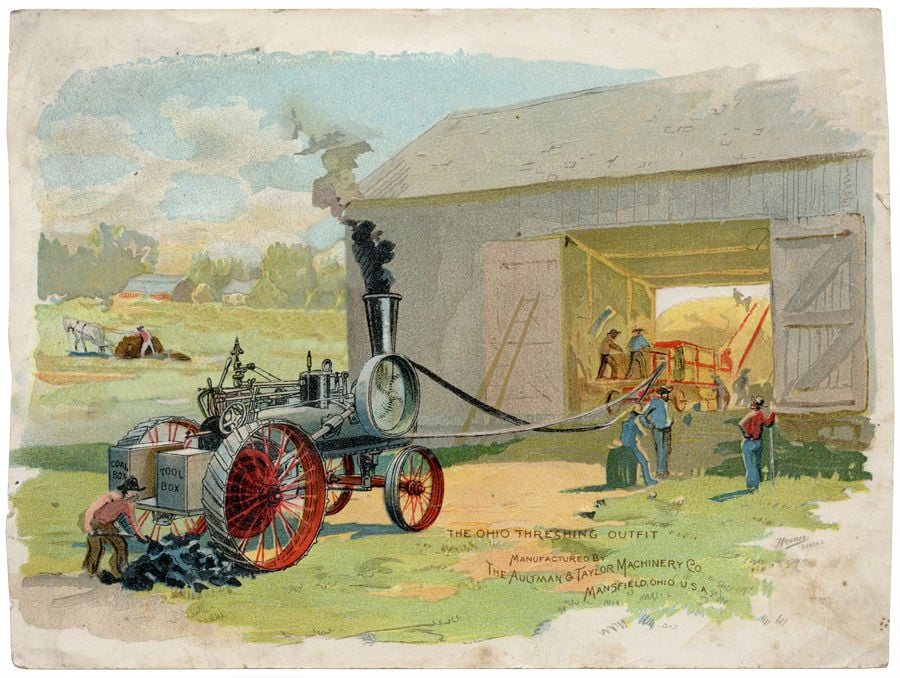 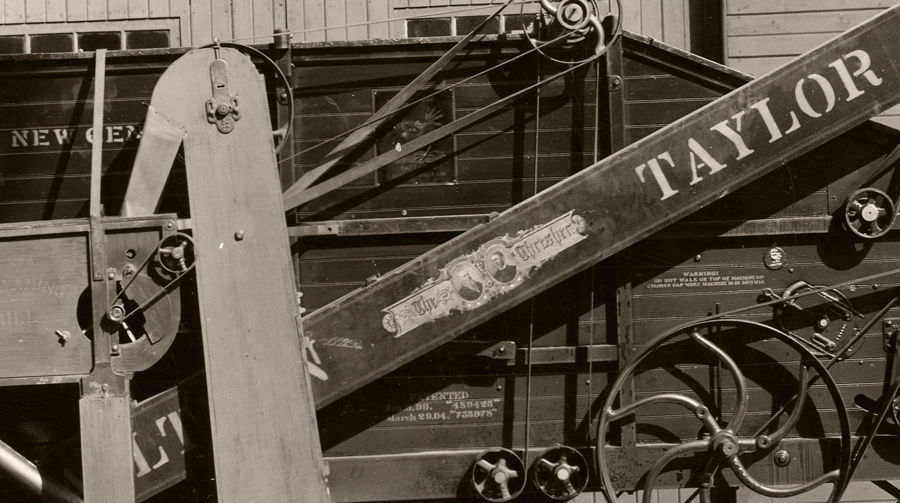 A close look at this photo from 1917 reveals the portraits of Mr. Aultman and Mr. Taylor imprinted right on the farm equipment. 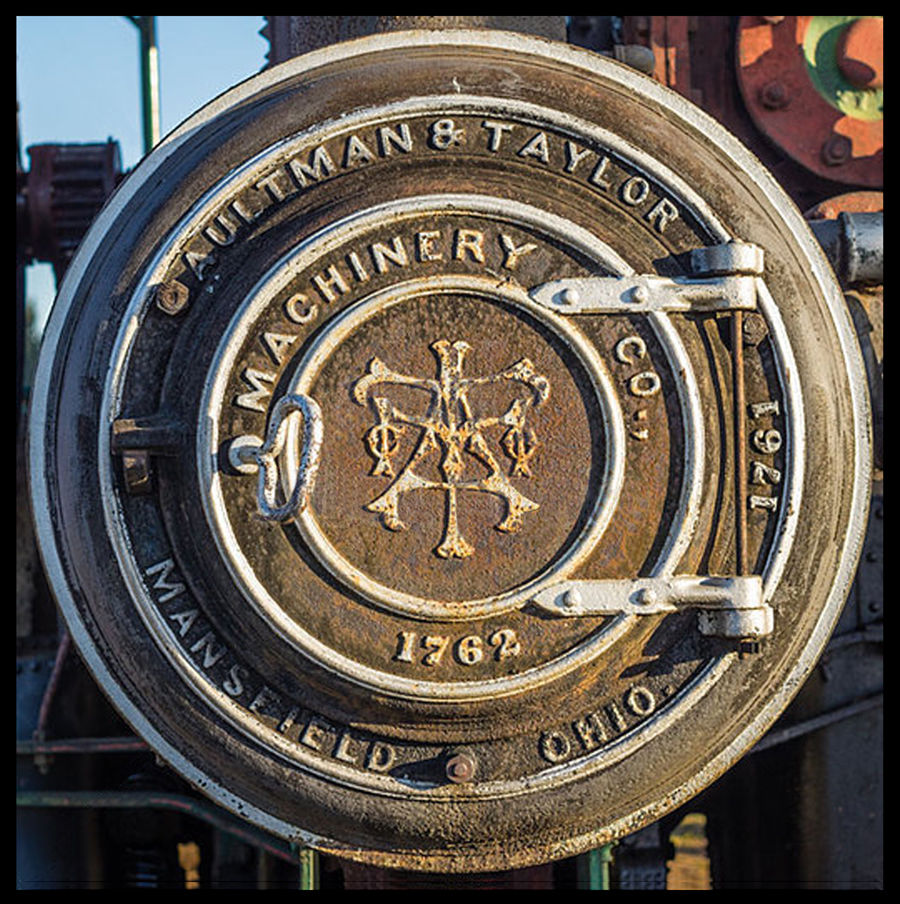 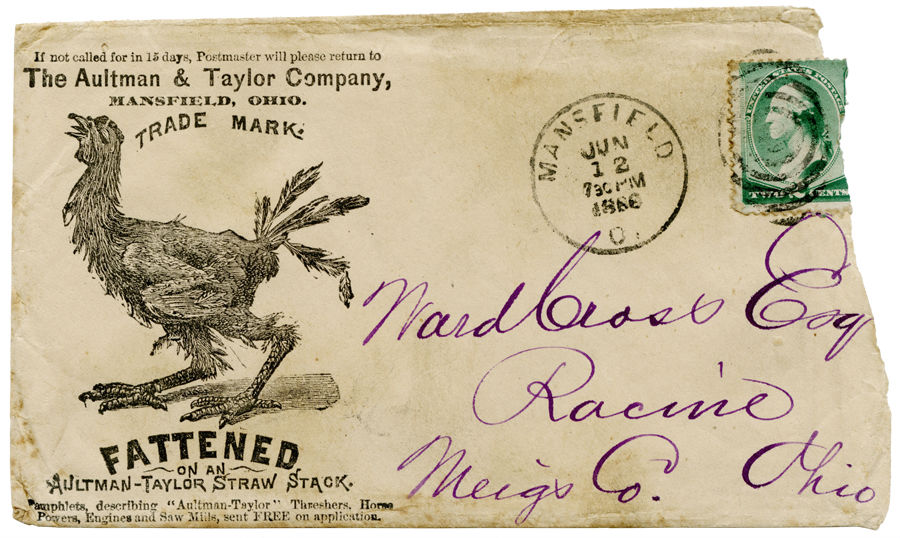 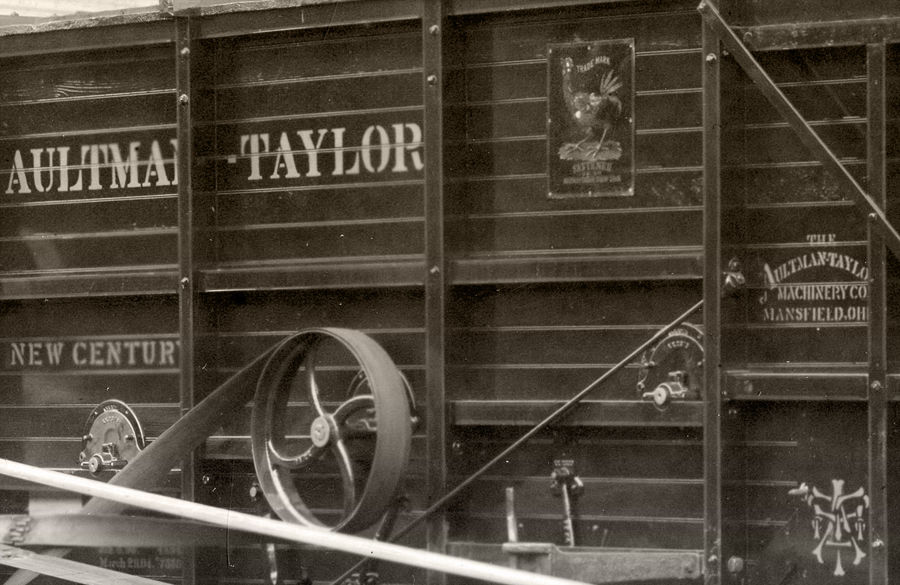 The side of this Aultman & Taylor huller, photographed in 1917, shows two of their logo devices: the starved rooster above; and the stylized AT image seen on lower right. 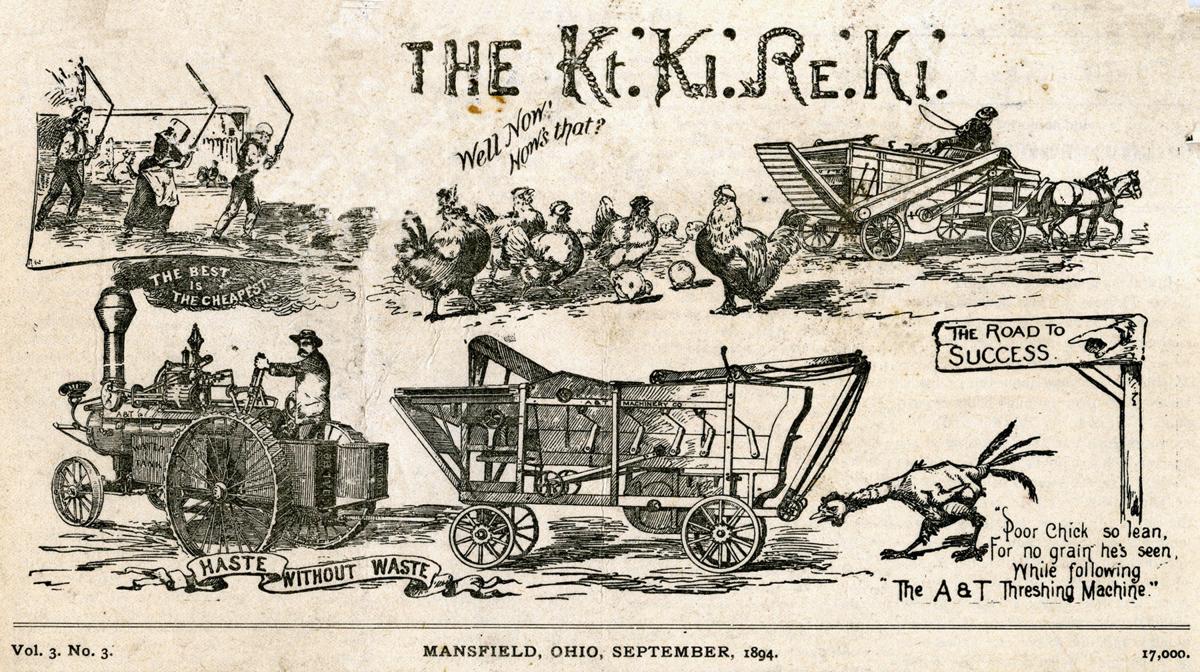 The Aultman & Taylor company newsletter had a masthead that included a visual history of the art of threshing: thrashing the grain with sticks; threshing by horse power; and steam powered threshing. 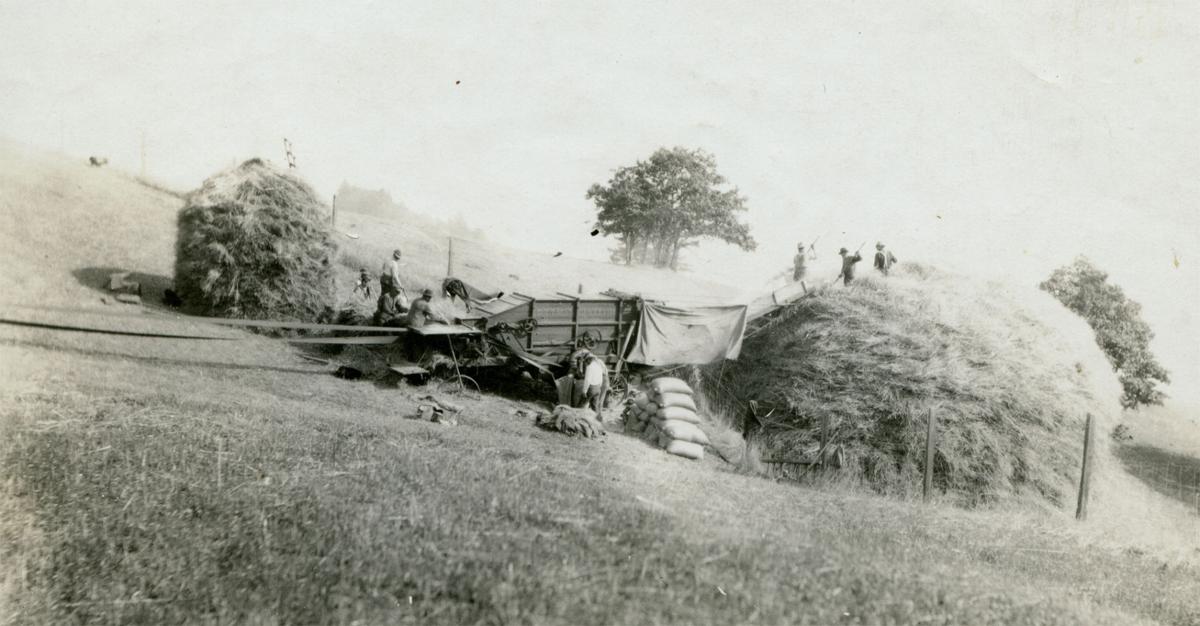 This Aultman & Taylor thresher was photographed in the early 1920s producing an epic strawstack. 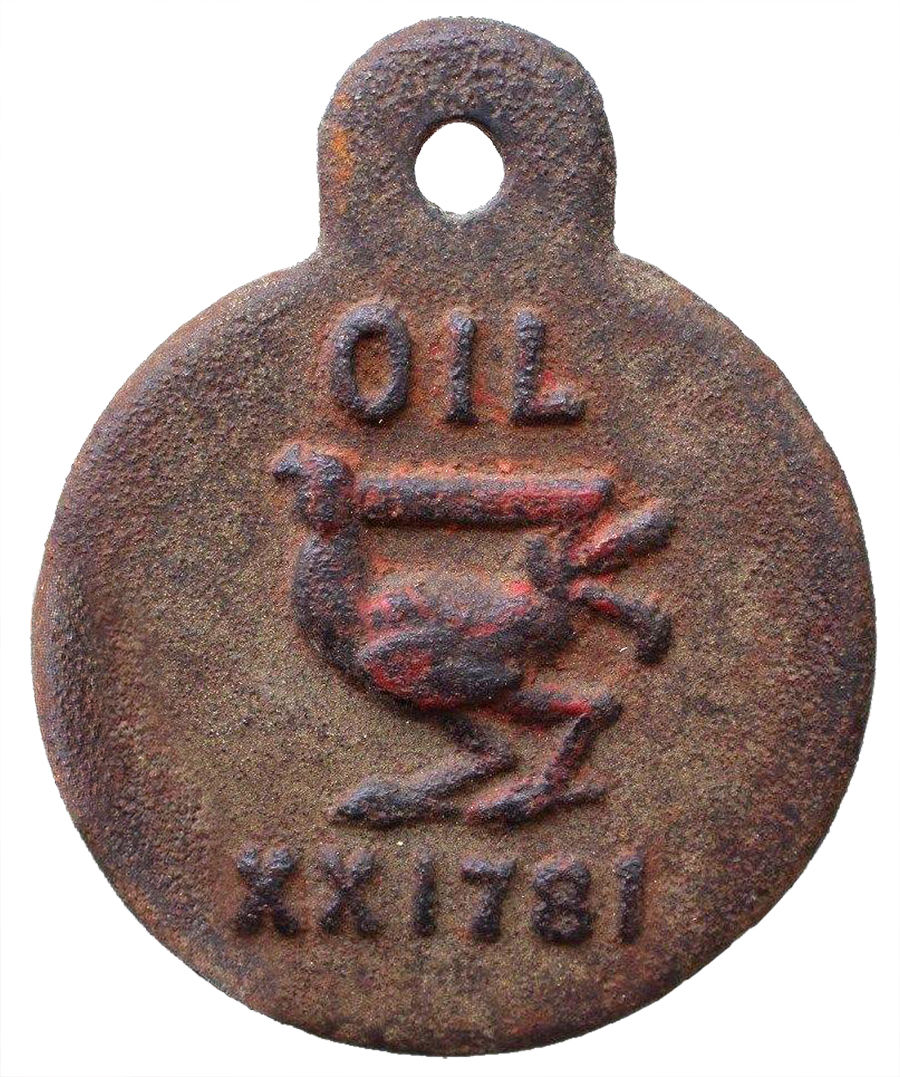 Even the oil caps on Aultman & Taylor machinery served to promote the famous rooster.

Aultman & Taylor produced a number of promotional watch fobs throughout the decades of their life in Mansfield.  Cast in various metals and styles throughout the years, they all featured the iconic rooster.

Mansfield does not have a mascot.

All the schools of the city have mascots, but the city itself does not have a specific symbolic character who embodies its civic spirit.

This was not always the case.

During the formative years of the city’s industrial emergence—from 1866 to 1923 when local manufacturing rose to prominence—Mansfield definitely had a mascot; and the city was known all over the world by a highly recognizable, clearly iconic emblem.

It was the “starved rooster.”

If that doesn’t sound particularly dignified, then you need to know more of the story: because that scrawny, moth-eaten bird was highly respected all over the country.

For many generations, Mansfield has been recognized as a center of innovation in the US: a place where new things are put forth; new products are devised; new methods perfected; new procedures developed.

This is not hyperbole; it is not wishful promotion from city boosters. There are a remarkable number of societal-shifting accomplishments covering a broad spectrum of focus, that had their origin right here in our town.

This trend can be traced back, perhaps, to 150 years ago when the Aultman & Taylor Company set up shop in Mansfield, and revolutionized the industry of farm machinery.

Cornelius Aultman already had a successful farm machinery factory in Canton; manufacturing horse powered mowers, reapers and “thrashers,” but he wanted to try something new. He was convinced the agricultural world in America was ripe for a new technology in harvesting.

The new idea he wanted to explore, and products he wanted to tackle were so different from what he was doing in Canton, he decided to establish an entirely new center of production in a location where independent creativity could take root.

In 1866 he and Mr. Taylor of Chicago rode all over the Midwest looking for a suitable site. When the train stopped in Mansfield they recognized the perfect spot.

Thirty years later, after the company was unbelievably successful and celebrating its accomplishments at the 1893 Columbian Exposition in Chicago, this is what they wrote:

“The works are located at Mansfield, Ohio, one of the best railroad points in the country. They occupy twenty-eight acres of ground, and the tracks of three of the greatest trunk lines of the world run through its yards, thus affording shipping facilities that no other company possesses.”

When Aultman & Taylor came to town, they selected a site in the flats that was not only close to the railroads, but actually within the triangle created by the confluence of the crossing lines. Their shipping docks were literally only feet from all three tracks.

They went on to say that Mansfield “is the geographical center of the best hardwood district of the United States.” The Aultman & Taylor machinery required the finest oak, hickory and ash wood; and by the 1890s a regular year of operation required 300 train cars of coal, 500 cars of lumber, and 300 cars of iron.

In 1866, when the Mansfield factory was established, it was not like there was a shortage of competition in the agricultural implements field: Deere, McCormick, and Case were already leading a crowd of factories all over the country. Another factory would never find a foothold in that market.

But Mr. Aultman intended to create a product that was so radically superior to everything else available to farmers, that he would have essentially no competition at all.

That’s why many of the Aultman & Taylor products made in Mansfield were in the record books as “firsts” in the history of American agriculture: that was his intention when he set foot here.

Accordingly, Mansfield is where the first US traction engine was produced in 1880. They manufactured the first vibrating thresher machine. They invented boilers for steam power that were always the first of their kind, and devised patented mechanical elements of farm vehicles that became standard designs afterward.

Mansfield is where the largest traction engine in the world was imagined and fabricated.

The Aultman & Taylor epoch of farm machinery in Mansfield saw a progression from horse powered equipment, to steam power, to engines run by kerosene and gasoline. Their tractors, hullers and threshers were standard top-of-the-line farming necessities during their entire life span. In 1923, on the eve of the next great wave of farming innovation that combined all those functions together into one machine, the A&T Mansfield operation ceased and the company sold to a firm in Indiana.

By 1893 the Aultman & Taylor catalogs were available in English, German, Spanish and Scandinavian.

The famous Aultman-Taylor starving rooster was prominent in agricultural circles for half a century. It could be found in advertisements and newspapers, catalogs and company paperwork; barns and showrooms and county fairs. It was displayed very obviously on the machines themselves.

The descriptive texts promoting the 1893 world’s fair in newspapers across the US had a headline that read, The Poorest Rooster on Earth. “In the Agricultural Annex, the first peculiar object that catches the eye from the east entrance is a large yellow flag, with a picture of the starved rooster whose portrait is familiar to farmers everywhere…”

The biggest rooster was in Mansfield at the factory complex. “Travelers passing over the B&O and the Pennsylvania Railroads will see an immense Starved Rooster, the emblem and trademark of our company, covering the entire front of the mammoth A&T warehouse.”

If you’re not a farmer it is likely you won’t get the rooster joke, so let me explain it:

A threshing machine of the 1800s had one job only: to take the crop plant and thrash it so as to remove the valuable seed. The thresher then spit out the leftovers as dried straw.

If a threshing machine was haphazard or inefficient at its job, it left seed behind in the straw stack, rather than collecting it all in the harvest wagon.

A clever rooster could walk into the straw stack of a slipshod thresher, and get fat on all the seeds it left behind.

An Aultman-Taylor thresher was so efficient, there was no seed left behind at all. A rooster could starve following an A&T machine.

Seems like arcane lore in the 21st century, but to farmers in the 19th century this was sophisticated and funny. The scrawny rooster was clever and unforgettable, and it was priceless advertisement in the age of home grown agriculture.

They claimed the idea came from a farmer in Nebraska in 1875, who witnessed exactly that scenario: the starving rooster pecking pathetically as he searched the straw stack of an Aultman & Taylor “Excelsior” thresher. The farmer was so impressed, he put the hungry bird into a crate and shipped it to Mansfield on the train, as proof of A&T’s tremendous worth to farmers.

Men at the Mansfield thresher works fell in love with that survivor rooster, and adopted him as a company pet. The bird flourished for several years under doting, careful care; and when its little chicken soul flew off to greener harvests, his feather and bones were laid to rest in an honored grave on the hill next to A&T’s office.

So at least one Aultman & Taylor starving rooster got his belly full.