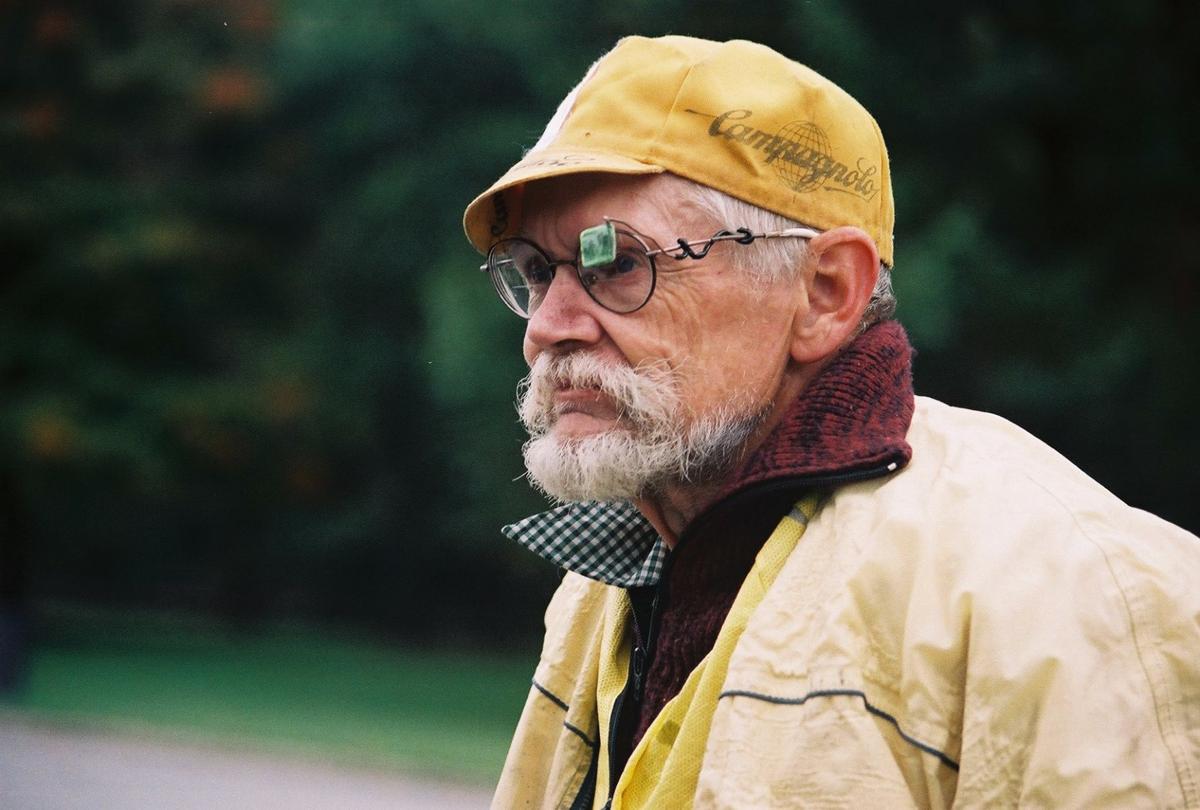 Chuck Harris wearing one of his mirrors, 2005. 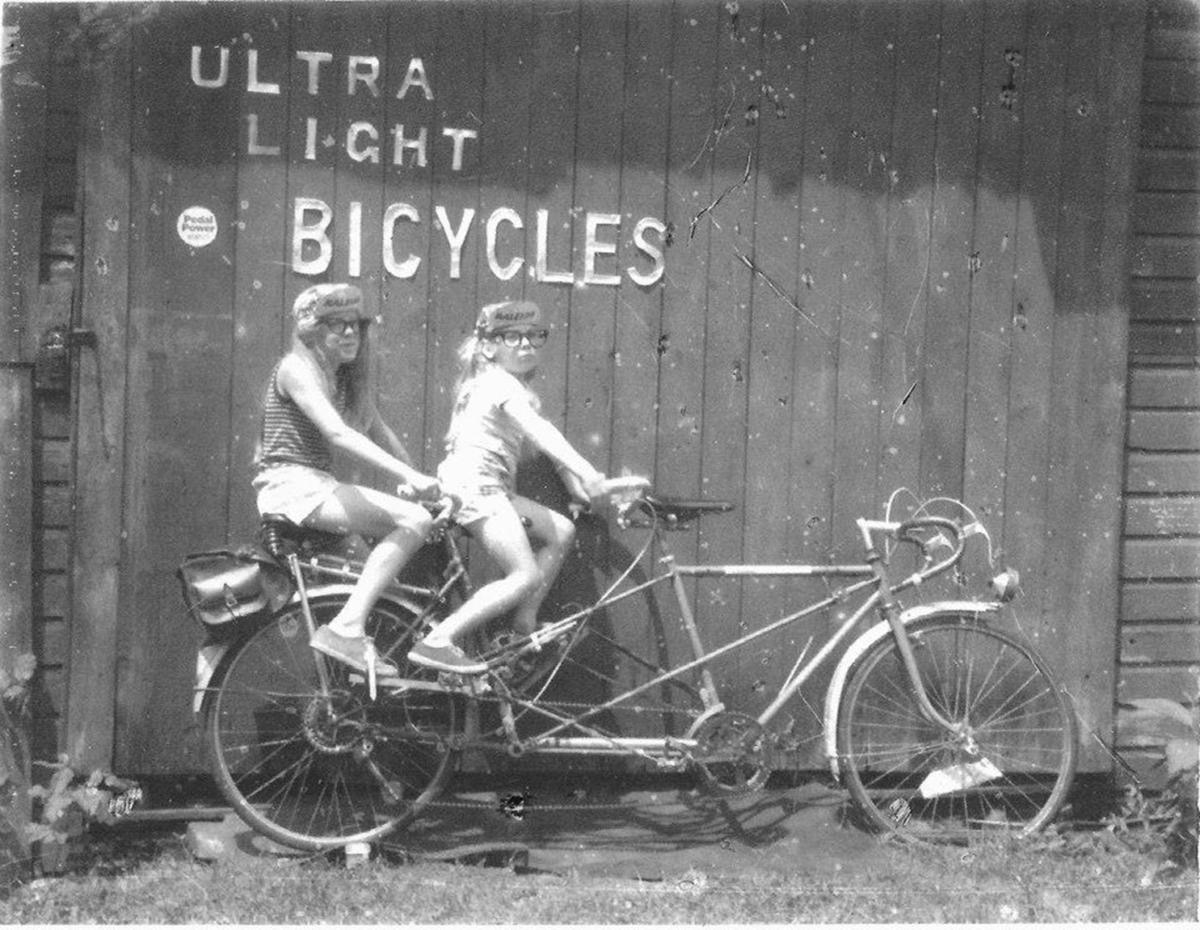 The coronavirus has limited where people can go and what they can do. Outdoor recreation, consequently, has been as popular as ever.

Take biking, for example: sales of children’s and adult’s leisure bicycles have increased by 56 percent and 121 percent, respectively, from March 2019 to March 2020.1

Ohioans taking to two wheels can ride hundreds of miles of bike trails throughout the state. The Kokosing Gap Trail is a paved trail stretching fourteen miles from Mount Vernon to Danville. It crosses the Kokosing River on former railroad bridges and passes through Ohio’s diverse landscape. Along one point of the trail sits a green bench with a plaque memorializing Chuck Harris, “The Mirror Man.”

Chuck was a beloved figure in the cycling community who made rearview bicycle mirrors at his workshops in Knox County, not far from where the Kokosing Gap Trail is today.

In 2015, Chuck’s family generously donated three mirrors he made, and we recently featured them in our exhibit, Ohio — Champion of Sports. The earliest example we acquired was made around 1974, but the story really begins in the 1960s. During a bike tour, Chuck met a doctor who rode with a dental mirror taped to his glasses. The device made an impression on Chuck, who soon began producing rearview mirrors for cyclists.

Chuck, whose love of cycling started as a child in the 1940s, made about 88,000 mirrors between 1969 and 2012. An engineer by trade, he constructed each mirror by hand. He made many at Ultra-Light Touring Shop, his bicycle shop located in Brinkhaven, Gambier and, later, Mount Vernon.

Chuck’s operation was decidedly green, using recycled materials like old bicycle spokes, car mirrors, bottle tops, cans and heat shrink tubing.2 He even repurposed an old bicycle frame into a grinding machine to shape his mirrors (you can see a video of Chuck using it here).

The main purpose of Chuck’s mirrors was, of course, to keep cyclists of all ages and abilities safe. Other rearview bicycle mirrors, like those introduced in the late 1950s, attached to handlebars or down tubes, requiring riders to briefly look away from the road.

“That’s all it takes to create an accident,” noted cycling pioneer Eugene A. Sloane in a column he wrote for Popular Mechanics.

When a reader contacted the magazine in 1975 asking for advice on buying a rearview mirror to attach to his bicycle, Sloane recommended Chuck’s: “Far better is a little mirror you can clip on your glasses, available for around $3.50 from Ultra-Light Touring Shop … This mirror is much safer as you can see the entire road behind you, it does not vibrate and you don’t have to look away from traffic ahead.”3

Even as mass-produced bicycle mirrors became readily available in the 1980s, 1990s and 2000s, Chuck continued to make each of his mirrors by hand in Knox County. Those who wanted one could order by mail or from Chuck directly at any of the cycling events he frequented.

He was a fixture at the Tour of the Scioto River Valley, Great Ohio Bicycle Adventure and other gatherings around the country. At these events, his ingenious mirrors and reputation as a kind advocate for the sport earned him the nickname, “The Mirror Man of Gambier.”

Chuck made an impression on all who met him, and after he passed away in 2012, memories of the “Mirror Man” soon appeared online:

“He was a fixture in our community and he made the best bicycle mirrors I've ever owned!”

“I loved seeing him every year at GOBA [Great Ohio Bicycle Adventure] and TOSRV [Tour of the Scioto River Valley]. What a wonderful, unique, colorful, kind, and helpful man!”

“Since 1972 I’ve worn one of Chuck’s mirrors on my glasses almost every day whether topping a pass in Peru, riding a quiet backroad in England, or making the short commute to the office…I’ll continue to use my Chuck Harris mirror in the years ahead.”

“He was a man who kept to the edge of the societal whirl, very much thinking and acting locally and letting the global results come as they may…He was a down-to-earth, conscientious, and unpretentious guy who took satisfaction in creating something useful out of what others threw away.”4

We are honored to have several original Chuck Harris mirrors in our collection, always reflecting “The Mirror Man’s” legacy as an Ohio innovator and cycling ambassador. Who said looking back is a bad thing?

Want to learn more about Chuck and his mirrors? Adventure Cyclist magazine profiled him in April 2011. You can also check out articles, documents and photographs his family and friends compiled on a memorial Facebook page.

4. These memories of Chuck Harris appeared on the following websites in August 2012: https://blog.centurycycles.com/2012/08/rest-and-ride-in-peace-chuck-harris.html and https://www.adventurecycling.org/resources/blog/the-mirror-man-looking-forward/.