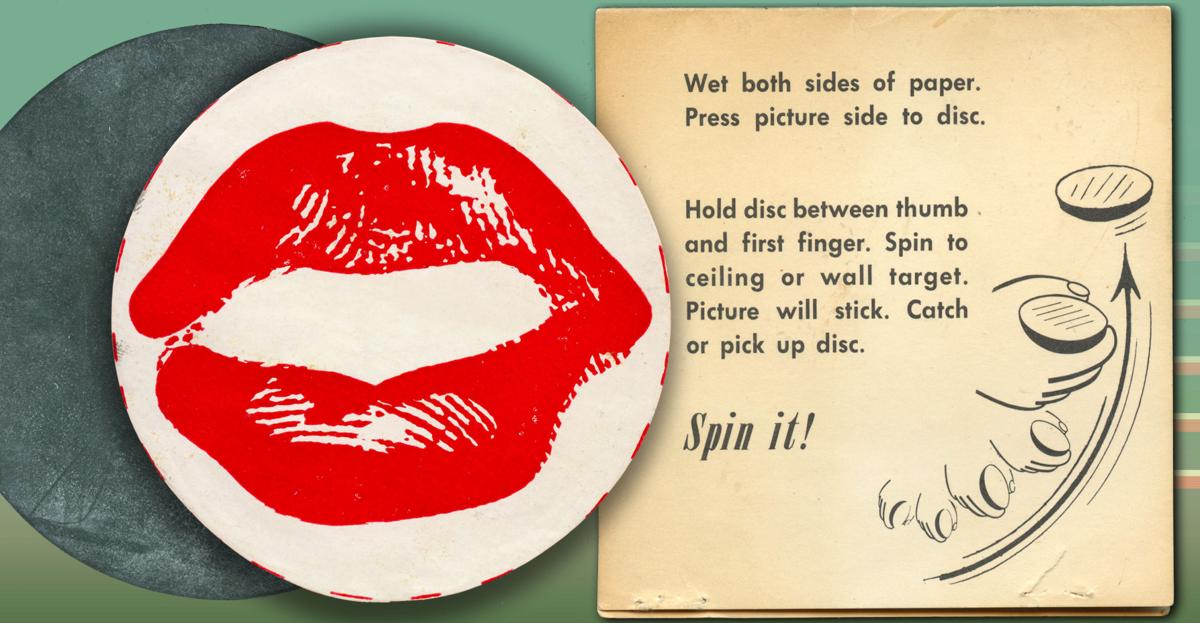 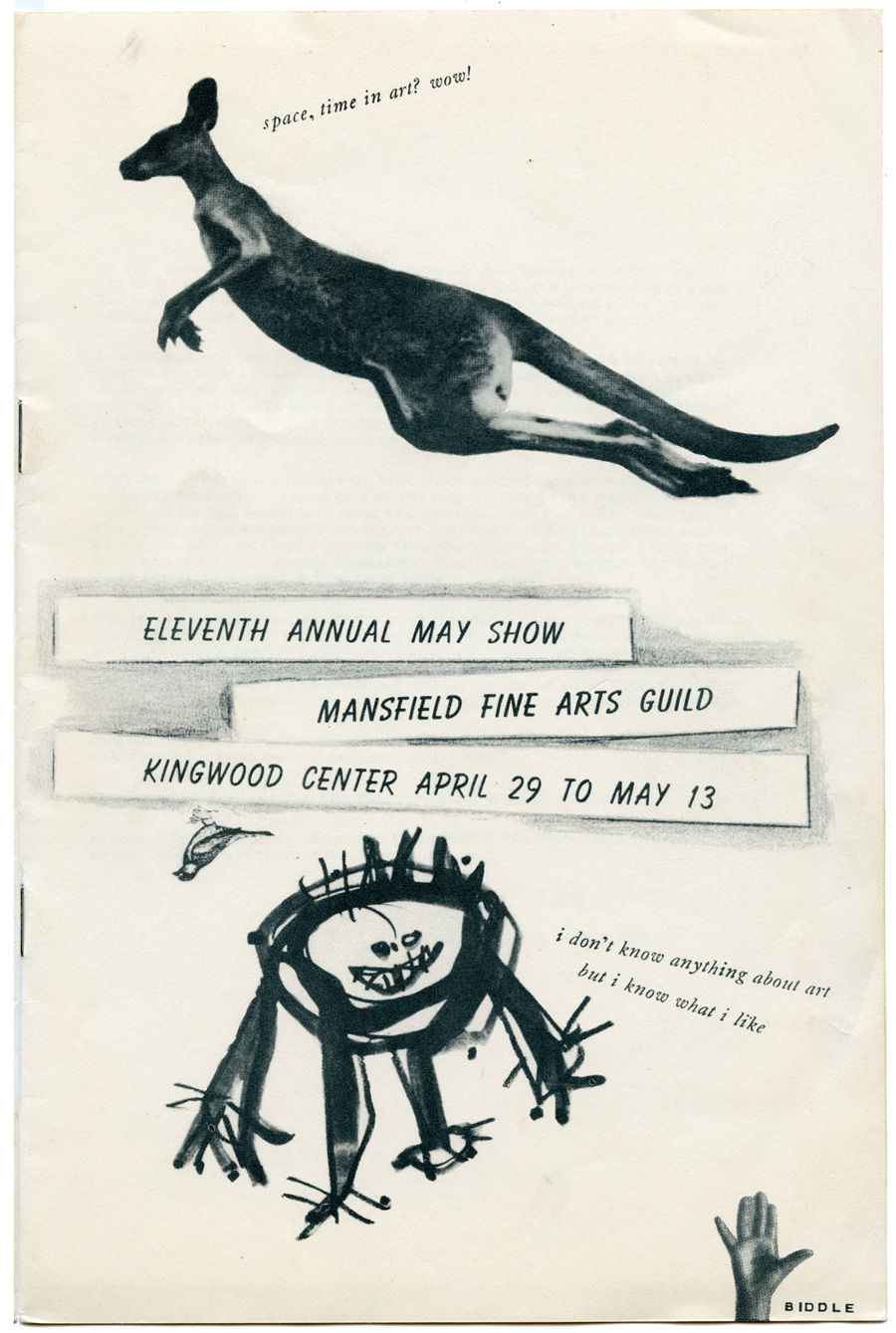 George designed this program for the May Show in 1957; another example of his whimsical idea of art. 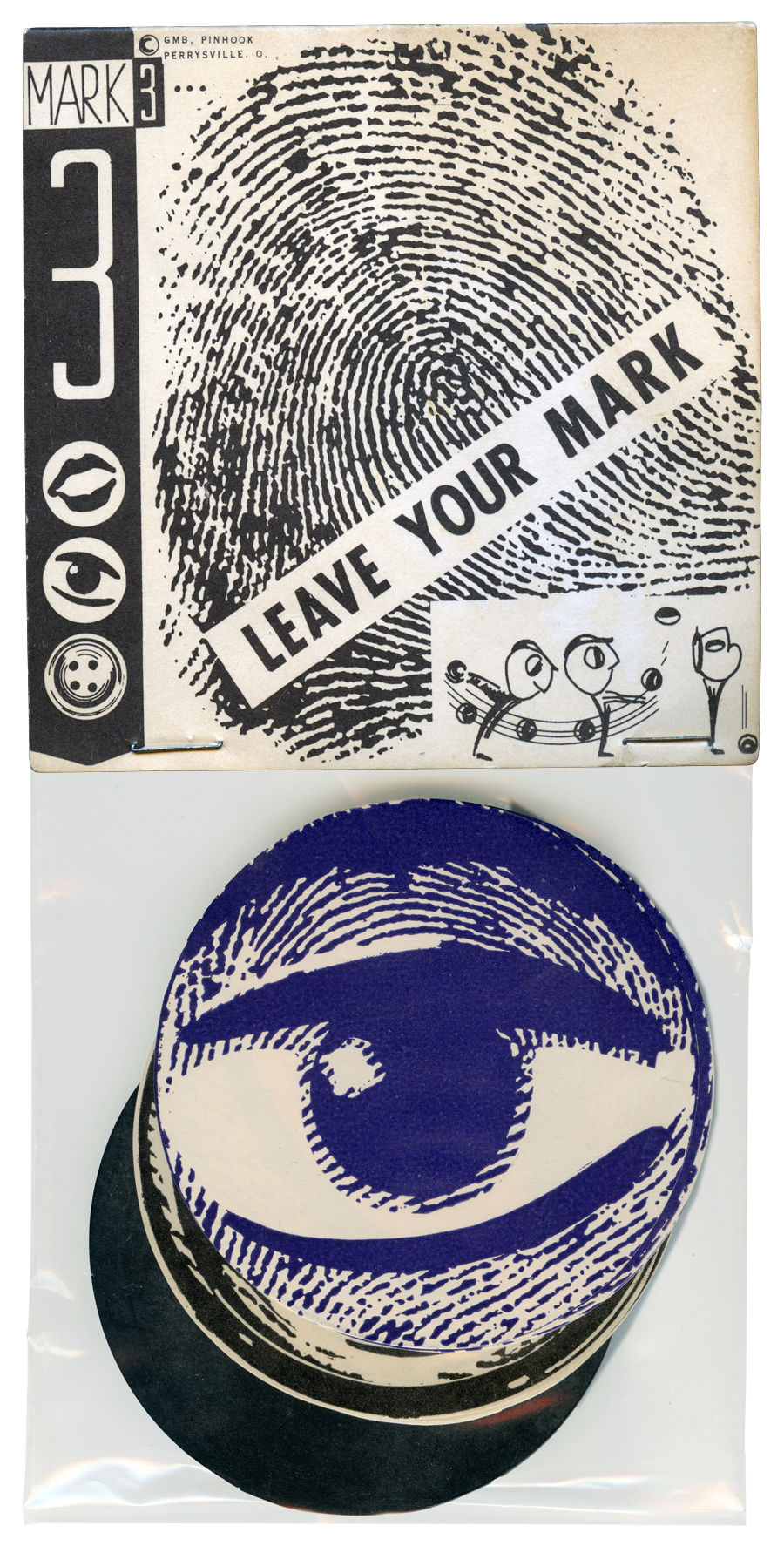 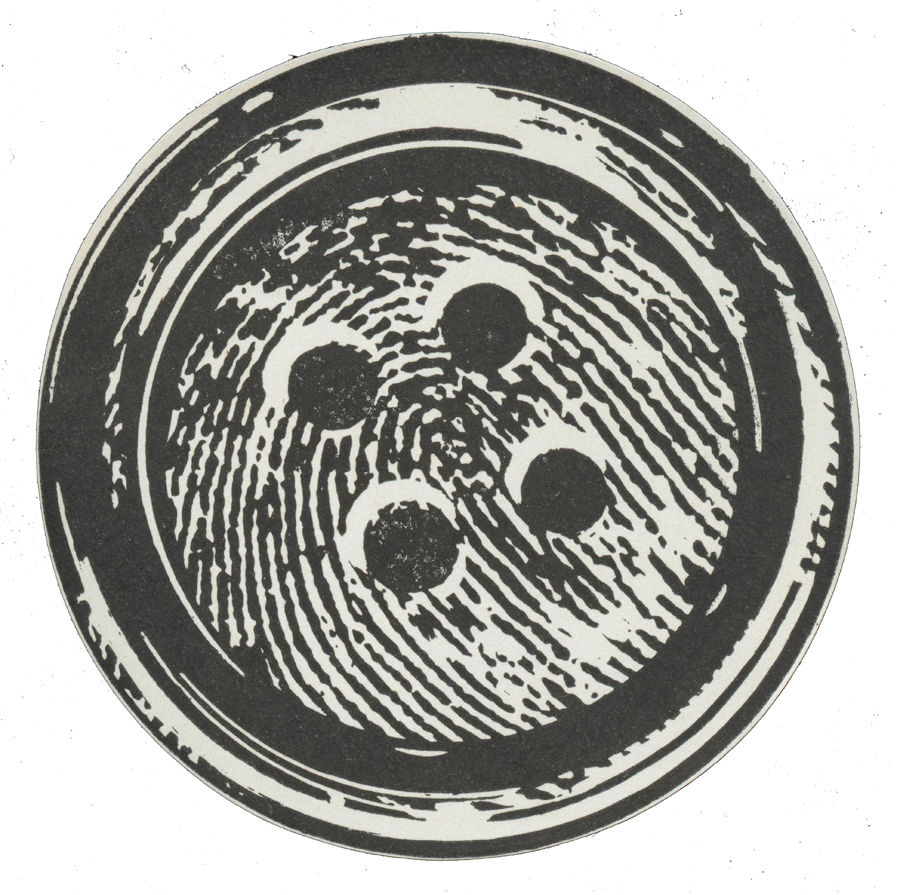 The gummed paper stickers came in three designs: there was a button, a watchful eye, and a set of bright red lips. 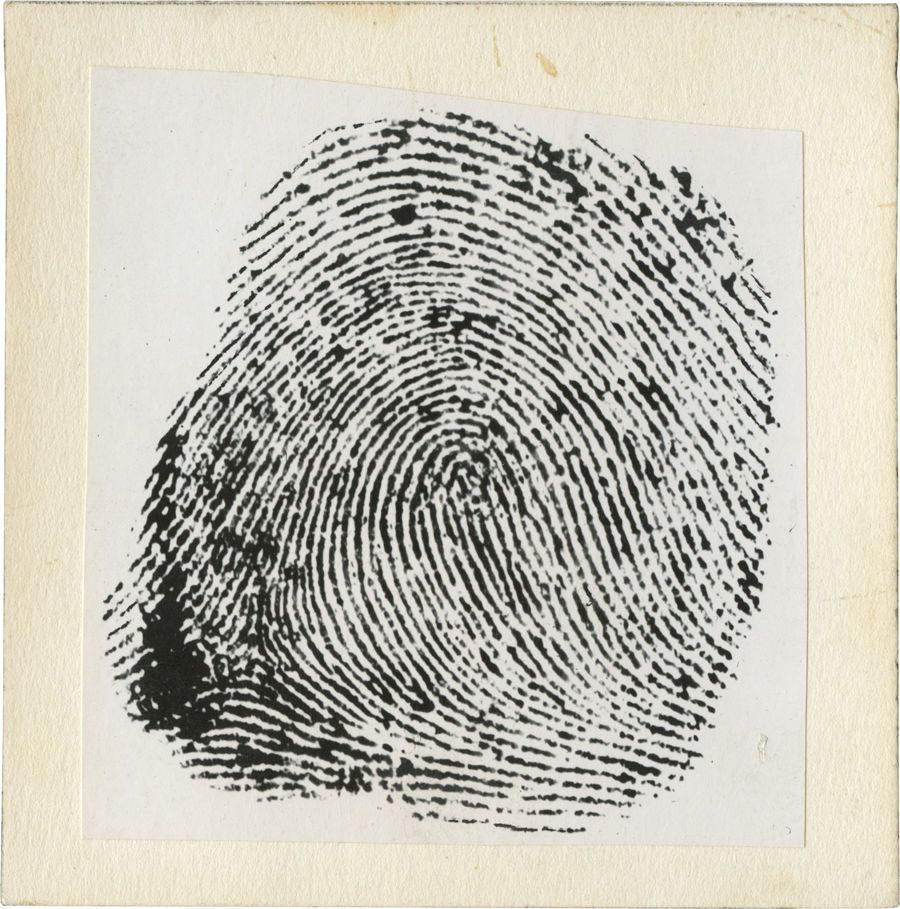 It is all based on a basic function of the human personality, the need to be known, the need to identify oneself: I was here.

It is the fingerprint of humanity and individuality. George just wanted to make it quick and easy and fun. And he put that fingerprint on every sticker. 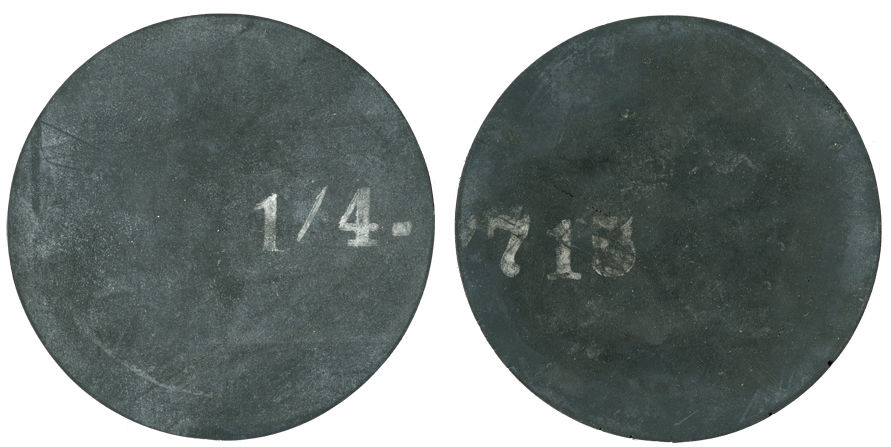 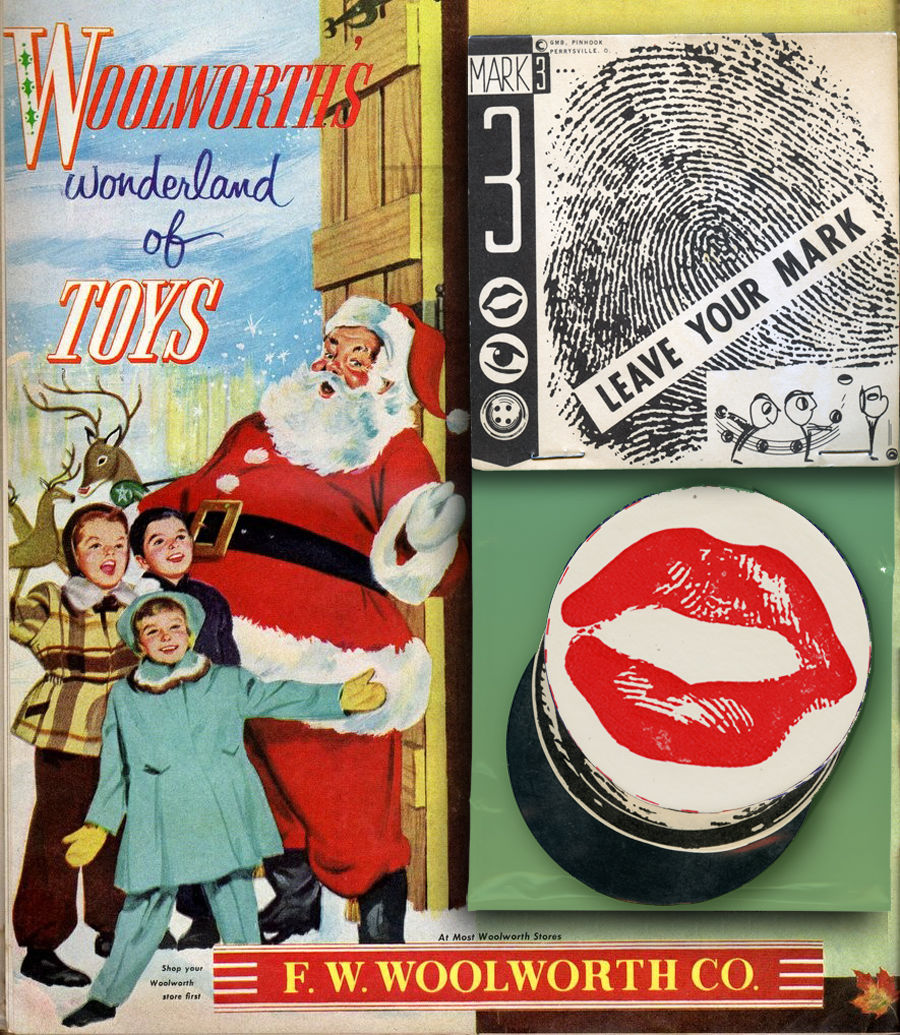 Of course you can’t predict a craze any more than you can predict what you’re going to dream tonight. And you cannot hammer a craze into existence: it either takes or it doesn’t.

All you can do is put it out there and see what happens.

Every artist hopes their art will make a mark on the world.

Richland County had an artist in the 1950s who wanted us all to leave our mark on the world. He made it possible for everybody to leave a mark, possibly in a very public place. That’s what he was hoping anyway.

Sadly, it never exactly caught on.

If George Biddle had cracked the fad novelty toy market of the1950s, there would have been marks left all over the place.

George was known primarily as a painter; he was founder and originator of the Mansfield Fine Arts Guild; he was an exhibitor in galleries of New York and Chicago. George was in a lot of different arenas of the art world, and in the middle of the 1950s he stepped into the novelty toy business as well.

America has always been a ripe market for fads: every year of the 20th century and all of the 21st century so far, there have been crazy little things that suddenly became wildly popular for a season of sales. Whatever it is, every kid wants one: pet rocks or hula hoops or jumping beans. People present them to each other as jokes, and these things—whatever they are: smiley face buttons, or troll dolls, or mood rings—catch on because they make you smile. They make America fun.

For a while it seems like these whatchamacallits are everywhere: like Rubik’s Cubes; and then they’re gone and nobody particularly thinks about them again except as nostalgia.

It is a massive US market: the pop culture fad promotion. Today you find fidget spinners at gas stations or minimarkets. In the 1950s Mansfield, these gizmos were at Woolworths department store on the Square; or at dozens of little Mom & Pop stores around town.

If an inventor happened to strike gold and make the one little fad thing that everyone wanted that summer, it could sell a million; and make a million bucks. So, there was an endless line of inventors, designers and dreamers continually cranking out new weird doodads.

In a season of the 1950s one of those guys was George Biddle.

As an artist, George Biddle was very much a populist: he wanted art to be for everyone.

He felt that art needed to be a greater part of everyone’s life—as vital as sports, as common as television; as ubiquitous as advertising. He drew few distinctions between art and life.

It was quite natural that he wanted to put art in to the hands of any kid with ten cents. He hoped that kids would spread art with great enthusiasm, so he created a plaything that made it possible for youngsters to leave their mark. It had a label that said very clearly: LEAVE YOUR MARK.

Inside every pack was a rubber spinner disc and a collection of three different sticker designs. All you had to do was lick the back of the round sticker; and then use the rubber disc to stick it to something. You placed the sticker by tossing/spinning the round rubber disc against a flat surface…ideally a ceiling.

More ideally, a ceiling in a very public place like school, or grocery store, or bus station, or bus. Maybe the YMCA gym ceiling.

If you got good at it you could walk into the bank and leave your mark on the ceiling before anyone knew what was happening or could chase you out. We know this because George and his friends put those red lips it in every bank downtown.

Like a lot of George’s work, it was an idea far ahead of its time apparently; perhaps a little too radical and revolutionary for the very proper 1950s.

The only real problem with the device was, it required practice. The disk needs to hit the wall almost perfectly for the sticker to adhere properly. Fortunately the pack came with quite a few extra stickers so you could gain experience at Sunday School, or in your neighbor’s nice finished garage.

We took it out to the Mall in the 1970s and tried quite a few times with marginal success, before they threw us out.

But if the Make Your Mark craze didn’t really catch on, it wasn’t from lack of promotion. George got his friends to shoot those lips onto the ceilings of stores, diners, hotels and Libraries all over downtown Mansfield.

Today you won’t find George’s novelty in the American Museum of Popular Culture as the big thing that caught on in the 50s. He pitched it to executives at the Woolworth’s national main office in NYC, but they didn’t go for it.

He sold some in Mansfield, Perrysville, and Lucas; so if you peel up the wallpaper on old businesses in those towns you might still be able to find those lips from 60 years ago.

The part of this story that really qualifies Biddle’s invention in Mansfield manufacturing history has to do with the rubber disks. It was those disks that really seeded the initial brilliant idea behind the project. George took one look at those 3” perfect circles lying in a big pile and saw opportunity. They were nothing but scrap, but to him they looked like finished products.

Those rubber disks were from Mansfield Tire—die cut stamped out of some Tire product and pitched in the trash.

So if the art pieces didn’t go to a museum, at least the rubber constitutes an authentic piece of Mansfield history.

Paul Cropper first told me stories about the lips downtown.  All the leftover parts came from Mary Biddle and Stacie Young.