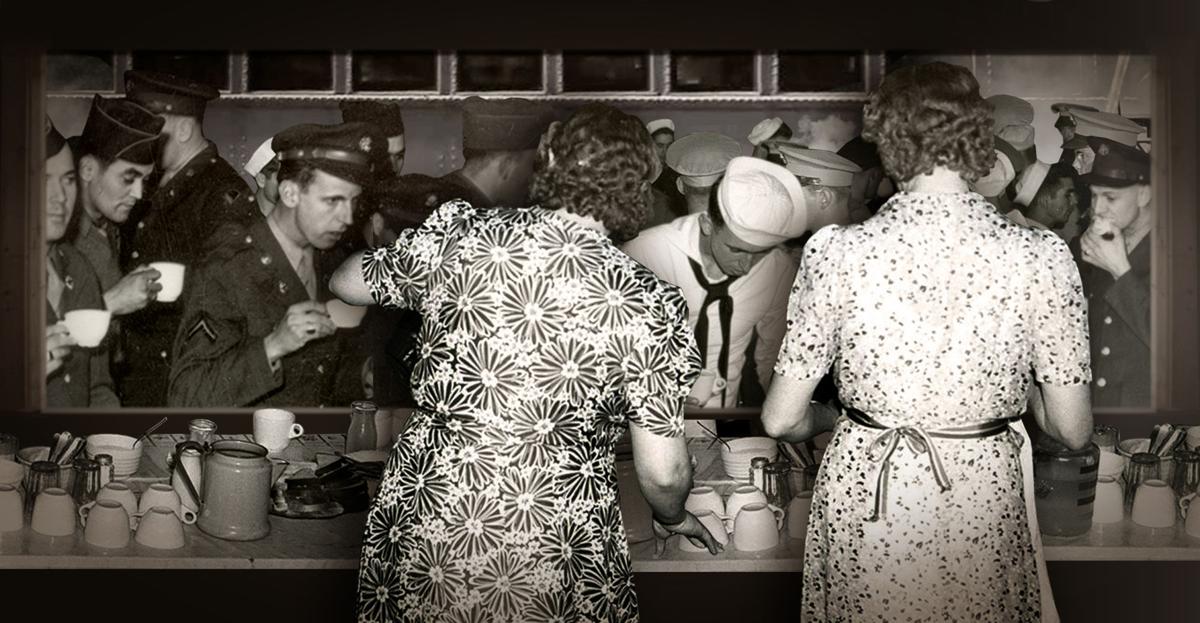 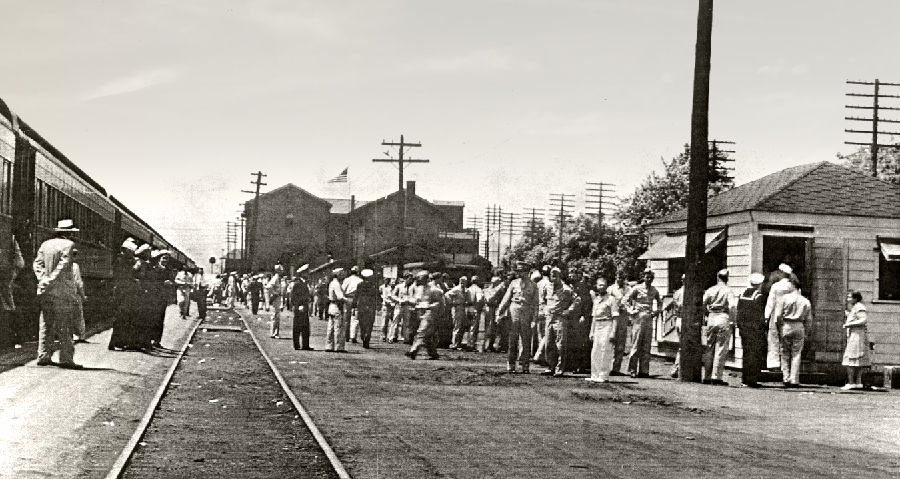 The Crestline Canteen operated out of a little kitchen shed with a service window that was clearly overwhelmed from the very first, so schoolkids in Crestline joined in the project by collecting pennies and nickels to raise $500 for a suitable Canteen building. The upgraded facility seen here had a door in each end so soldiers could file through.

The building seen in the background of this photo is the rear of the Union Station in Crestline. 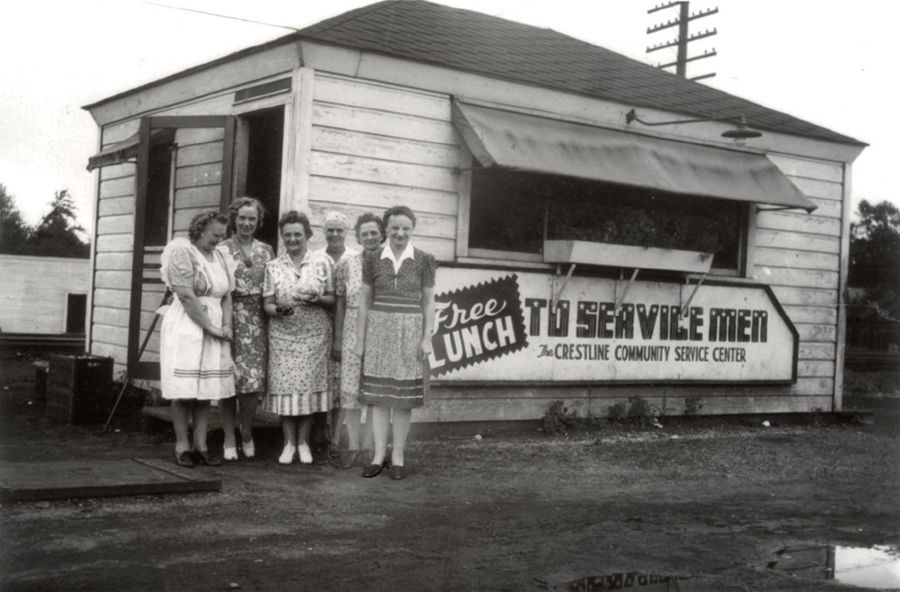 Crestline's Canteen required three committees of volunteers every day in order to be available for all incoming troop trains.  The volunteers came from all over North Central Ohio; members of every imaginable service organization from sororities to granges. 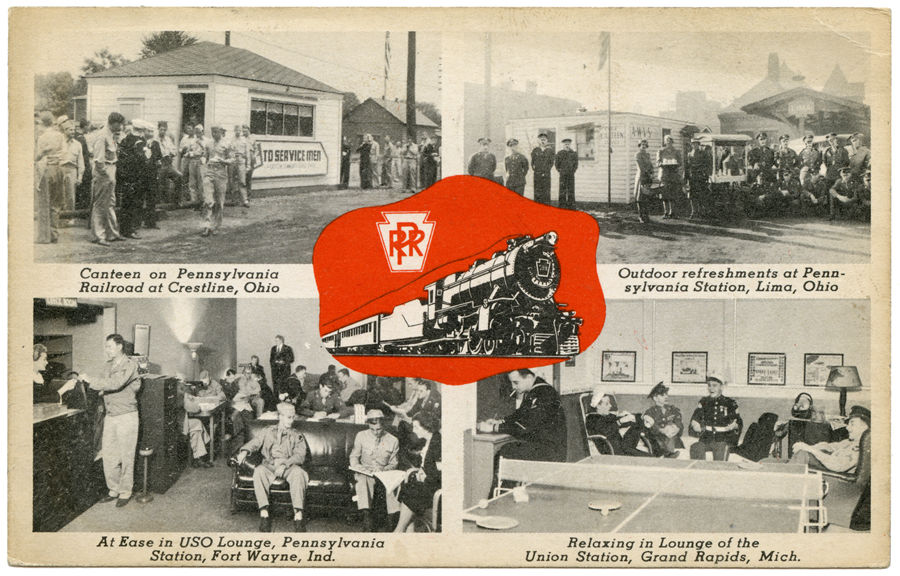 To encourage traveling soldiers to write home, trackside canteens across the nation offered them free postcards.  The Pennsylvania Railroad printed a series of cards depicting all of the canteens along its routes, including this one with a photo of the Crestline Community Service Center. 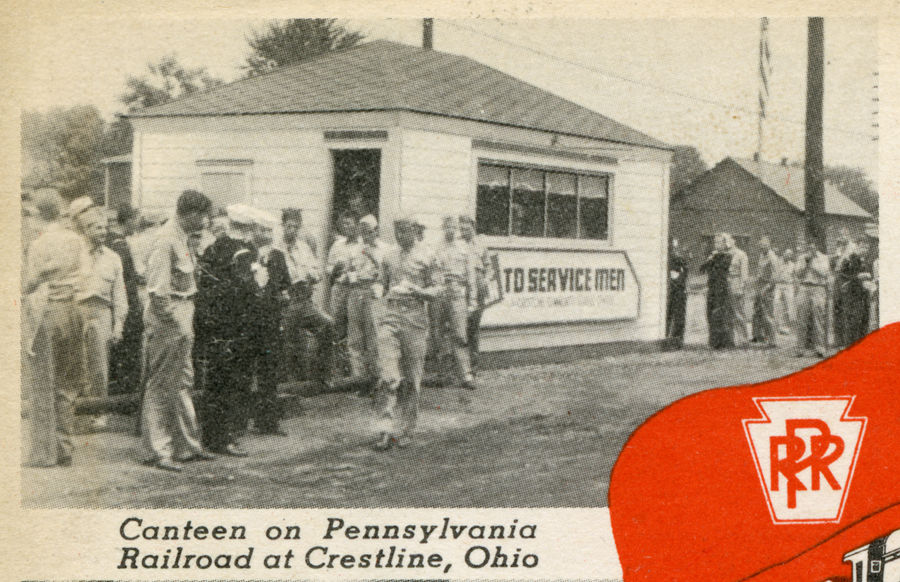 Volunteers who operated the Crestline canteen made sure that GIs had access to two kinds of fruit, hot & cold sandwiches, cake, doughnuts, coffee, and milk. 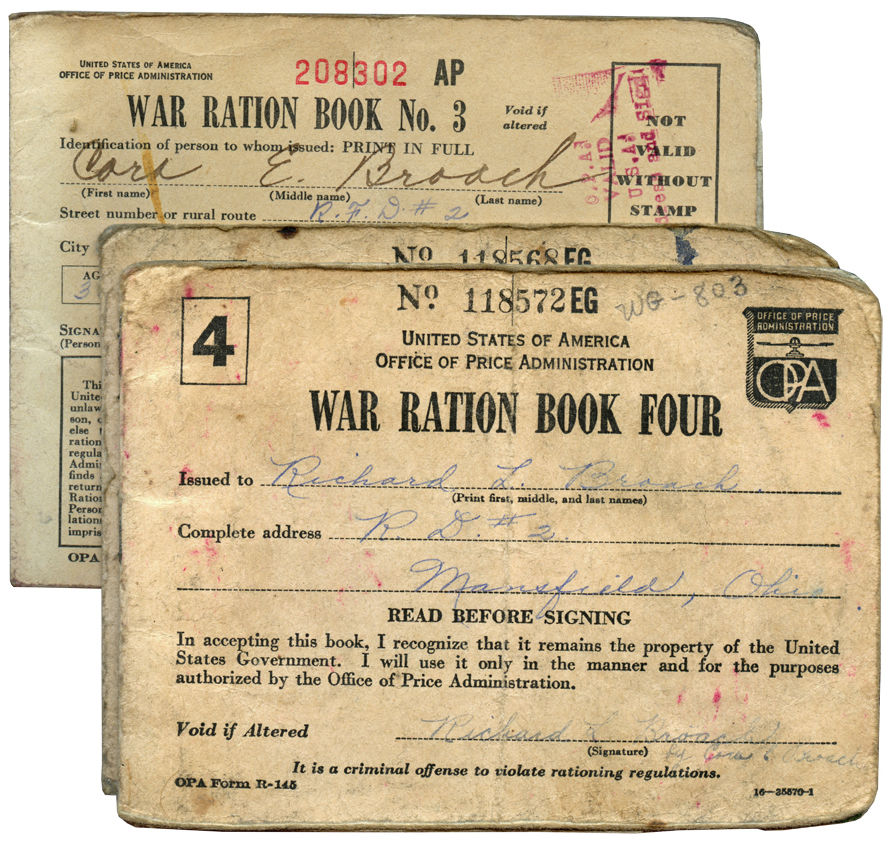 Many of the provisions that committees needed in order to prepare food for traveling troops--like flour, sugar, meats and butter--were rationed commodities during the war years of the 1940s.  The government issued Ration Books to ensure that every American had fair access to essential products, filled with removable stamps for various rationed materials.

One of the ways people helped the Crestline Canteen was by donating their ration stamps, that provided access to products essential in making food for soldiers, as well as procuring gas so volunteers could drive to Crestline from the six-county area. 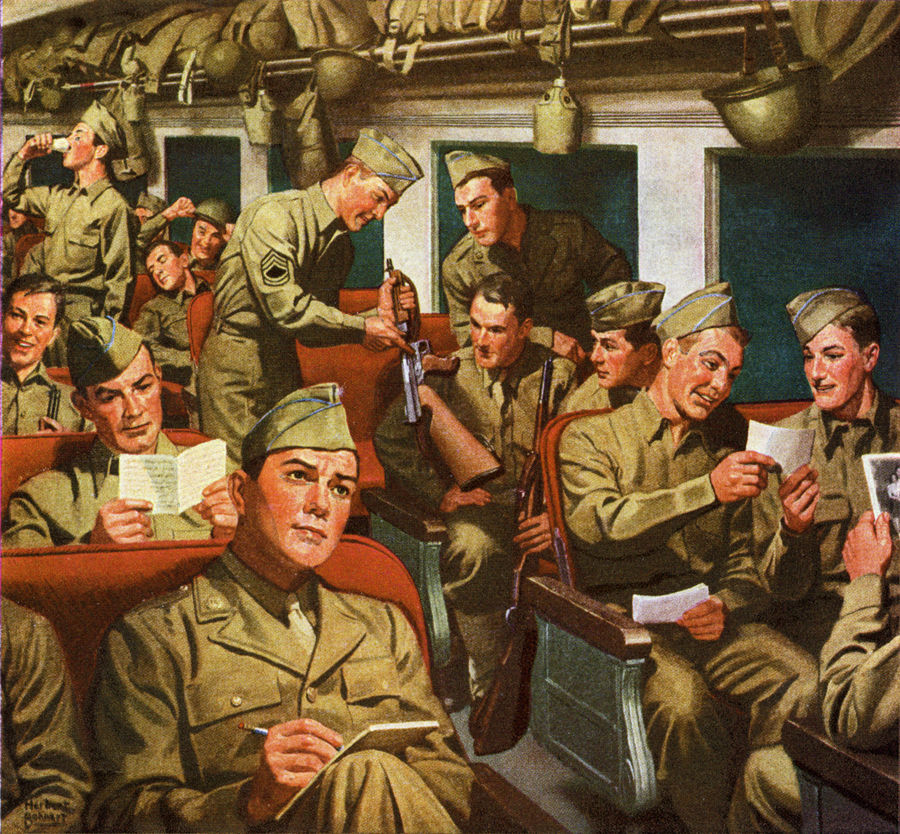 This illustration of GIs on the train is from a 1943 magazine ad for the Pennsylvania Railroad.  The painting shows soldiers well occupied with many enjoyable distractions on their journey; but what it doesn't show is the long, tedious hours of riding with nothing to do, and underscores how important the Canteens of America were in providing magazines, newspapers, crosswords, playing cards, writing paper, and comic books. 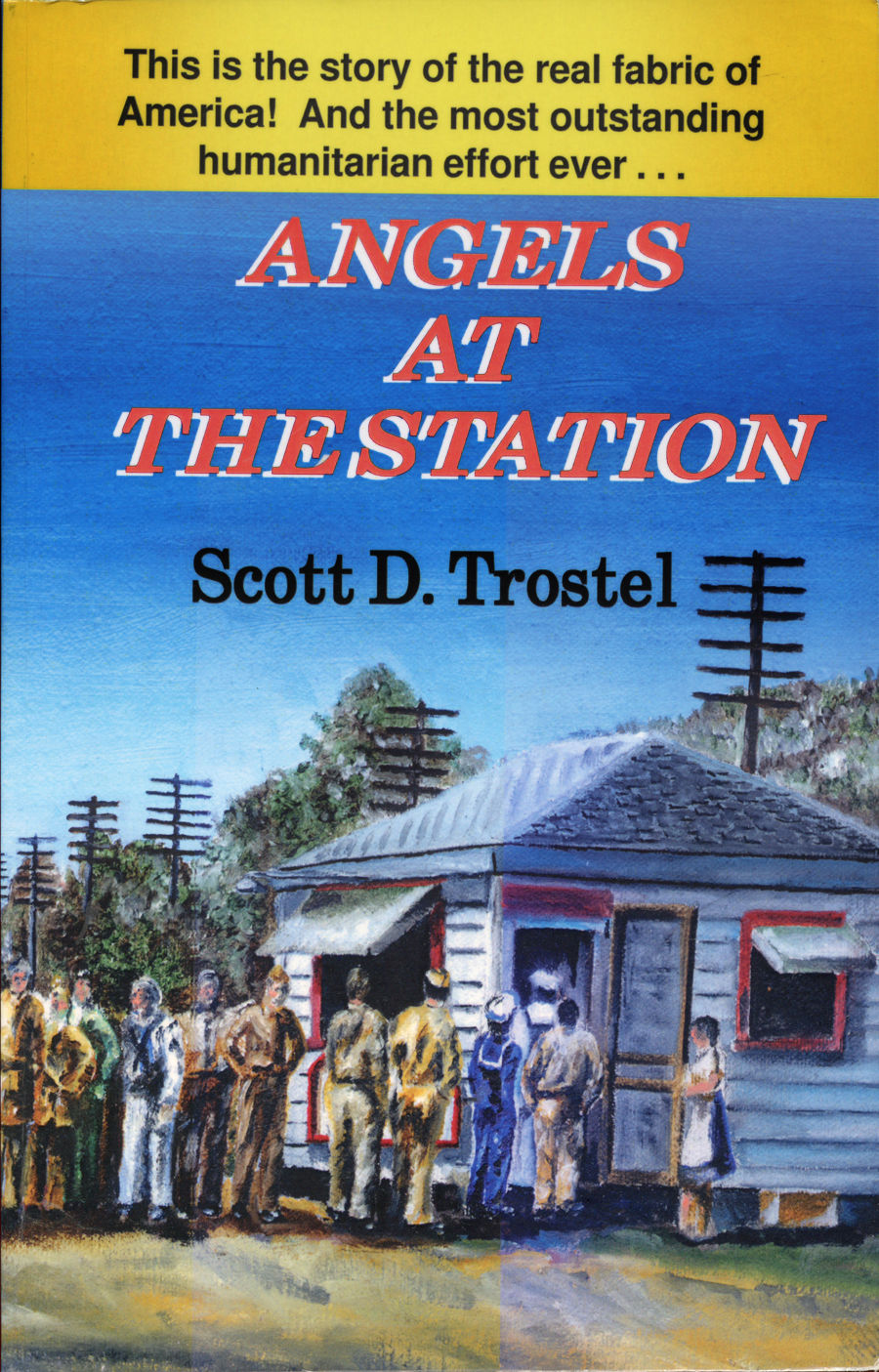 For a more complete look at the canteens of America during WWII, including the Crestline Community Service Center, check out Angels at the Station by Scott D. Trostel, 2008. 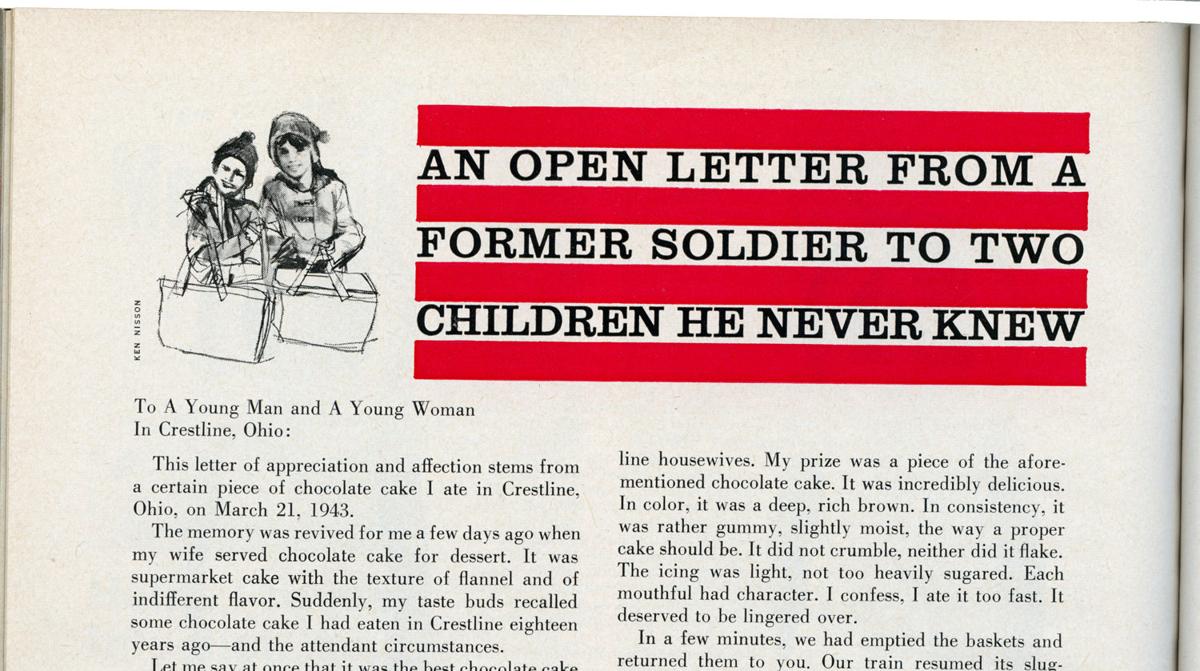 In 1942, when the world turned dangerous and the nation responded in epic mobilization to war, the Village of Crestline rose up and demonstrated to American soldiers exactly what it was that they were fighting for: a place where people are kind, thoughtful and generous.

These aren’t my words; they are the exact words used by soldiers who felt compelled to write postcards of thanks to the women of the Crestline Canteen.

The Crestline Community Service Center was a humble little frame building that stood near the railroad tracks, at the juncture where cross-country trains needed to stop and take on water. The maintenance break was enough of a pause to give a weary and homesick soldier the opportunity to step off the train for a few minutes, pick up a free sandwich, and take a cup of coffee from the hands of a woman with a warm smile.

It was a touching act of encouragement that was enacted over a million times in the course of four years: any time of day or night; any kind of weather.

The community-based canteen movement — of free trackside food service to transiting Armed Forces—got its start in the Midwest early in 1942, as towns across the US railroad map responded in supporting the troops with free coffee. Crestline recognized it had a prime opportunity to be of service, because it is an intersection of major railroad lines: there would be troops passing through the village every day of the year on passenger trains, troop trains, and hospital trains.

The organizing committee in Crestline had the idea that all the churches in town could divide up hours of duty, and be on hand to serve 200 troops a day.

Before it was over, they would get backup from 3,897 different committees across six surrounding counties: three committees a day, for 1,299 days.

The actual spot on the map where the civilian world intersected with transiting troops, took place at the modest building by the side of the Pennsylvania Railroad tracks in Crestline; but the body of support behind that tiny spot was a vast, multifaceted network that defies calculation. It is not beyond reason to say that nearly everybody in six counties had a hand in making it possible.

Committees in Mansfield raised funds for the canteen to buy supplies: like the Tri Gamma Sorority; the Knights of Pythias; St. James Church and First Lutheran Church.

Committees scheduled days when they would stand duty at the Canteen to greet traveling troops: like the Business and Professional Women’s Club; the Liederkranz; the Sons of Union Veterans Auxiliary and the American Legion Auxiliary.

Committees in Richland County baked cookies and stacked sandwiches: like the Women of the Moose; the Lucas Mothers Club; the Blue Star Mothers.

Committees assembled kits of postcards and pencils so soldiers could write home: like the D.A.R.; the GOP Women’s Club; the Jefferson Grange 251.

The war was a fearful and largely abstract concept to kids here: a catastrophe that was shaking the earth in someplace like Europe or Africa or the South Pacific; but anyone here in our hometown, no matter how small, could do their part to put an end to it, by collecting matchbooks to put into the hands of US troops at the Crestline Canteen.

Everyone had a role to play, if it was simply dropping a dime in the hat.

The Crestline Canteen was on the Pennsy line that ran east/west, and it was generally halfway between the Great Lakes Naval Training Center, where troops prepared to leave the country, and the ports of embarkation on the East Coast, where they stepped off American turf. From Chicago, it was a 5- to 7-hour ride to Crestline, so troops were always eager to take a break in Crawford County.

The problem was that US troop movements — even within the States — were top-secret information, so nobody at the Canteen ever knew what to expect, or when, or how many.

It led to a careful networking between Ohio canteens: Lima, Crestline and Alliance; because trains might stop for only a few quick minutes and the ladies needed to be ready to hand baskets of provisions into the trains through the windows.

Troops on the trains were just as uncertain about their schedule as were the canteens: they didn’t know where they were headed or how long it would take. Some soldiers rode the train 4 to 6 days straight, and the tedium only served to amplify their dread of the unknown they were headed toward.

To them the Crestline canteen was an inexpressible intercession of grace.

One soldier came through Crestline in 1943, and 18 years later he was still moved by the experience:

To a young man and a young woman in Crestline, Ohio:

This letter of appreciation and affection stems from a certain piece of chocolate cake I ate in Crestline, Ohio, on March 21, 1943.

I was on a jam-packed troop train, chugging fitfully from Camp Upton, New York, to California. There were about 500 of us on the shipment, a ragged collection of unhappy New York draftees in ill-fitting green fatigues, our arms still aching from shots, our morale frayed.

At Crestline, as the train came to a tired halt at a railroad siding, we looked through the frosted windows, across the rows of track glistening in the winter sun, and saw a small wooden booth, shivering in a freezing March wind.

From out of the booth ran two children — you, to whom I am addressing this letter.

Each of you carried an enormous wicker basket. Grinning, you hurtled across the rows of railroad track, eager to reach us before the train pulled out. We leaned out of the windows and shouted at you.

Eighteen years after that March day, my recollection remains vivid, heart-warming. In my mind’s eye, I see the outlines of the little Ohio town, the bright, cold sky, the two of you in your rough winter clothing. And I will be forever touched by the memory of the ladies of Crestline, who made up the baskets, and you who waited for us so patiently.

"For all I know, you may have moved away from Crestline, but surely someone there will convey to you my thanks for a moment of simple kindness that will stay with me forever."

Pictures and information in this article come from many sources including the Richland Chapter Ohio Genealogical Society; Angels at the Station by Scott D. Trostel; Joyce Oyler Wells, Phil Stoodt, and Hal McCuen.