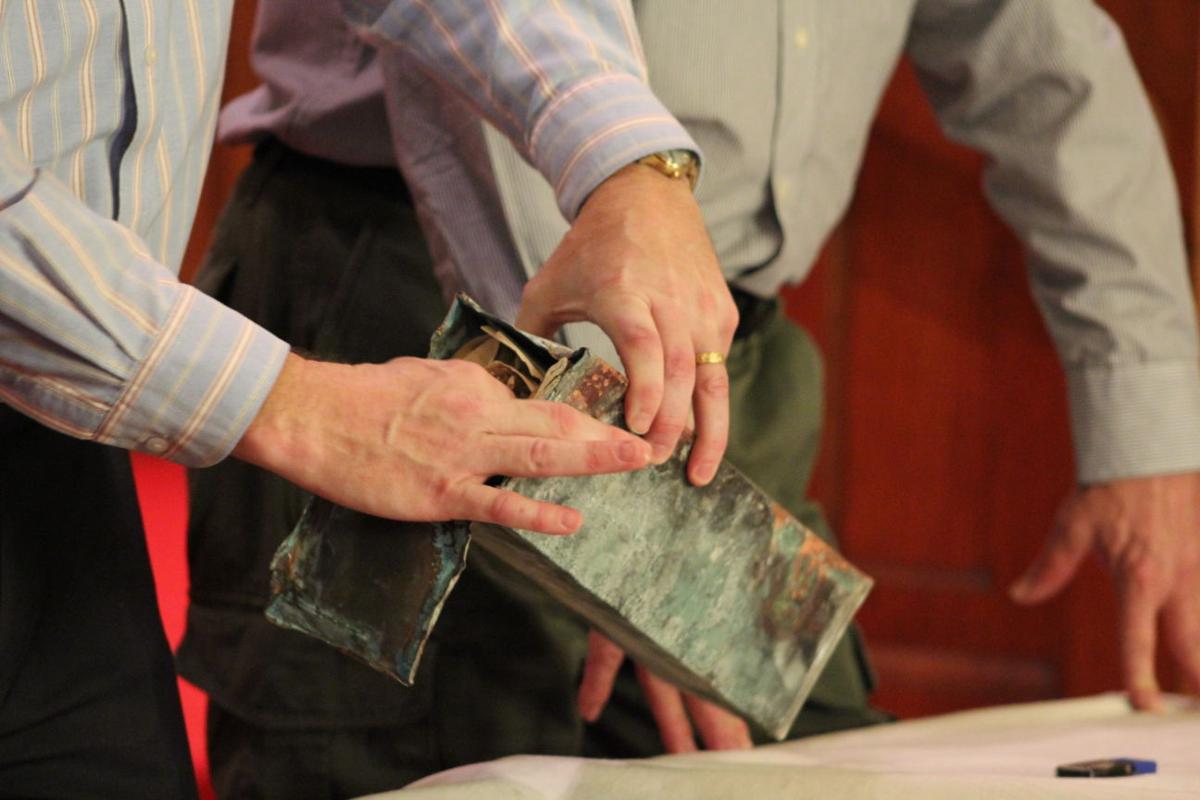 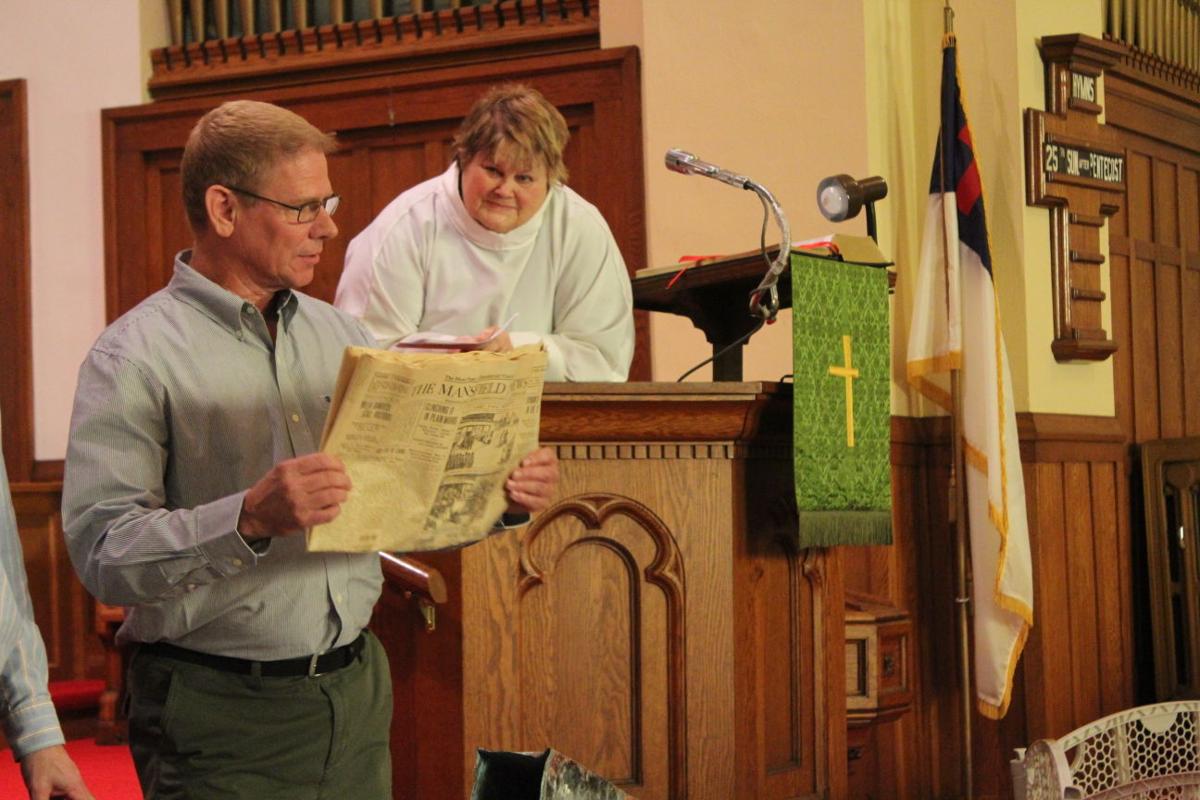 St. Matthew Lutheran Church member Brian Armstrong displays "The Mansfield News" newspaper to the congregation. The newspaper, along with other items, had been kept inside a copper box within the church cornerstone for close to 100 years. 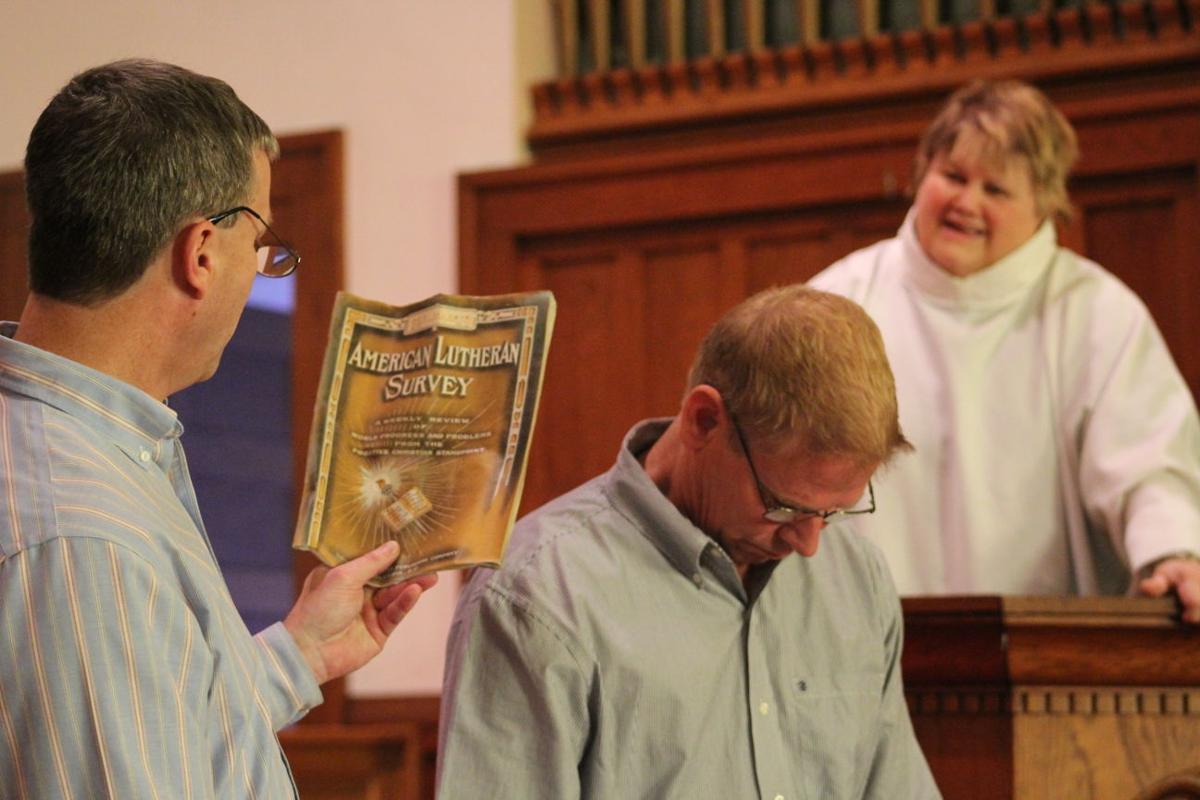 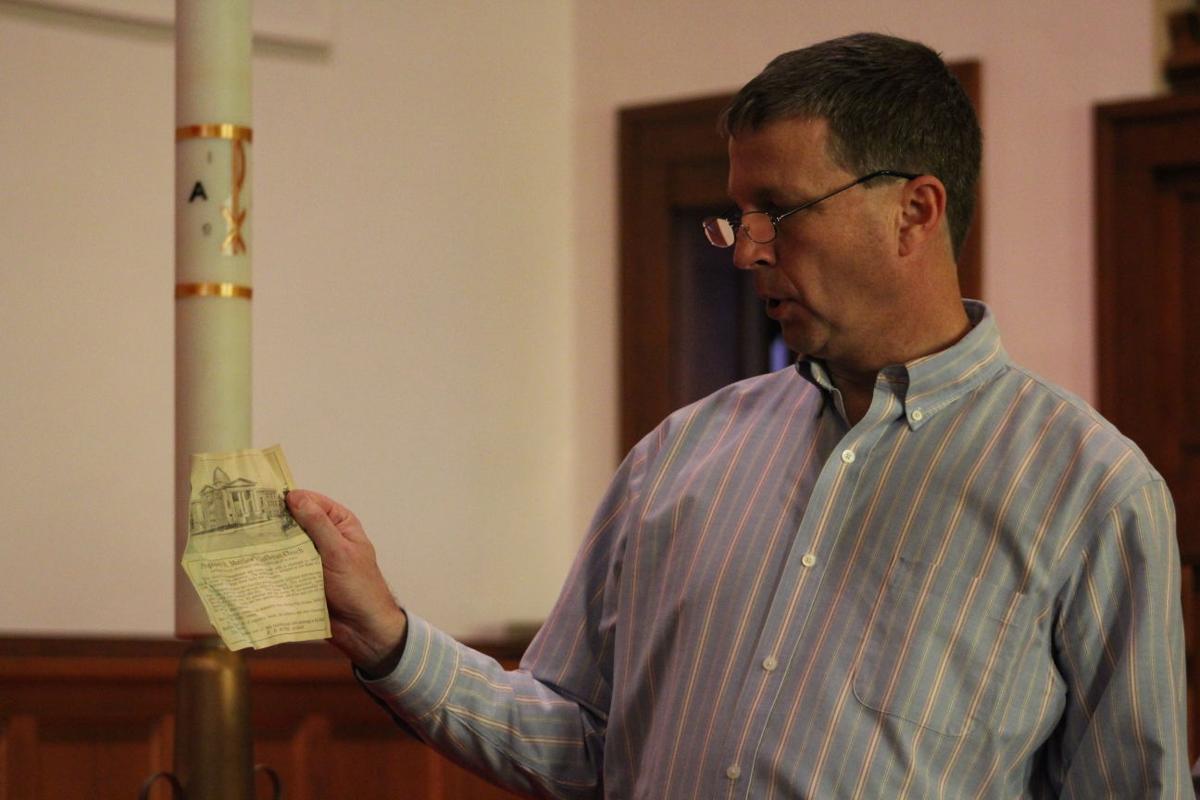 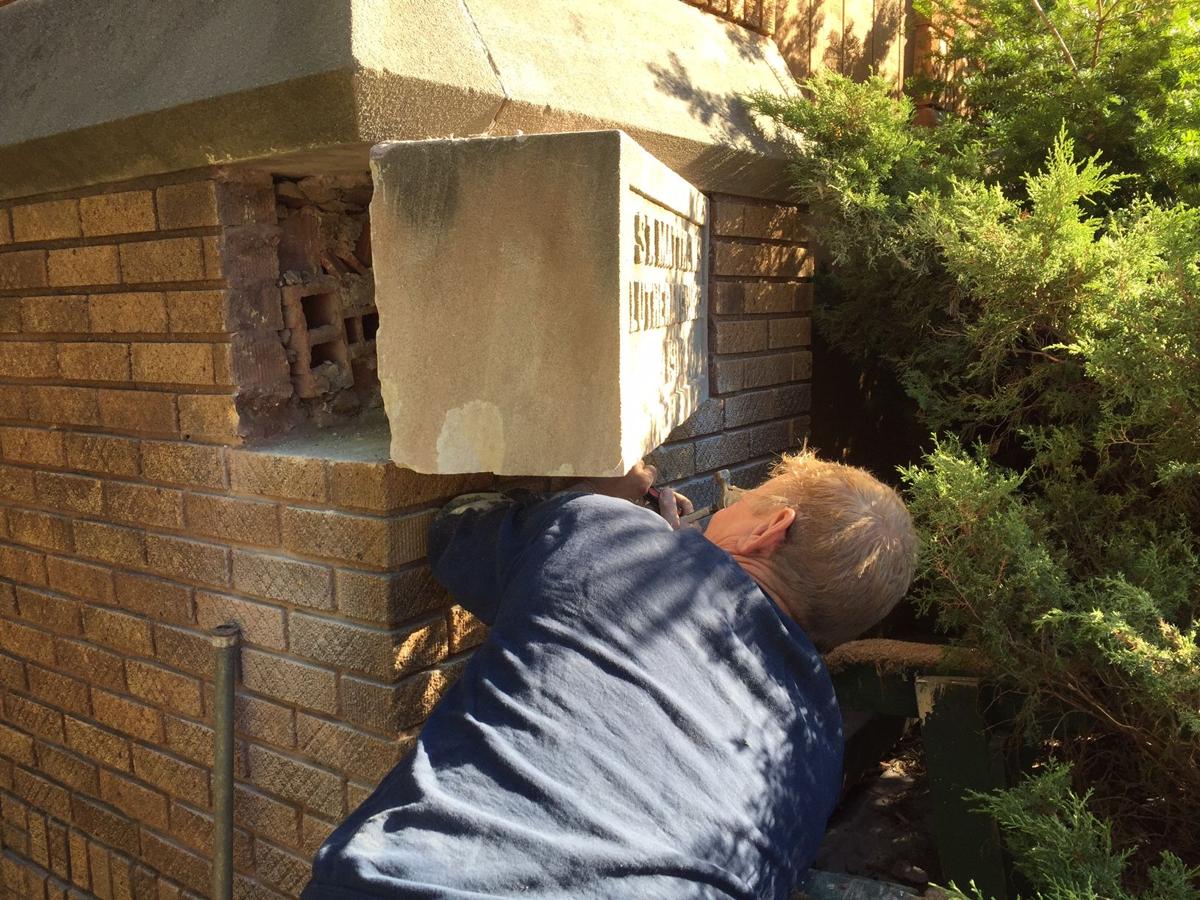 Brian Armstrong pries the cornerstone out from the building. 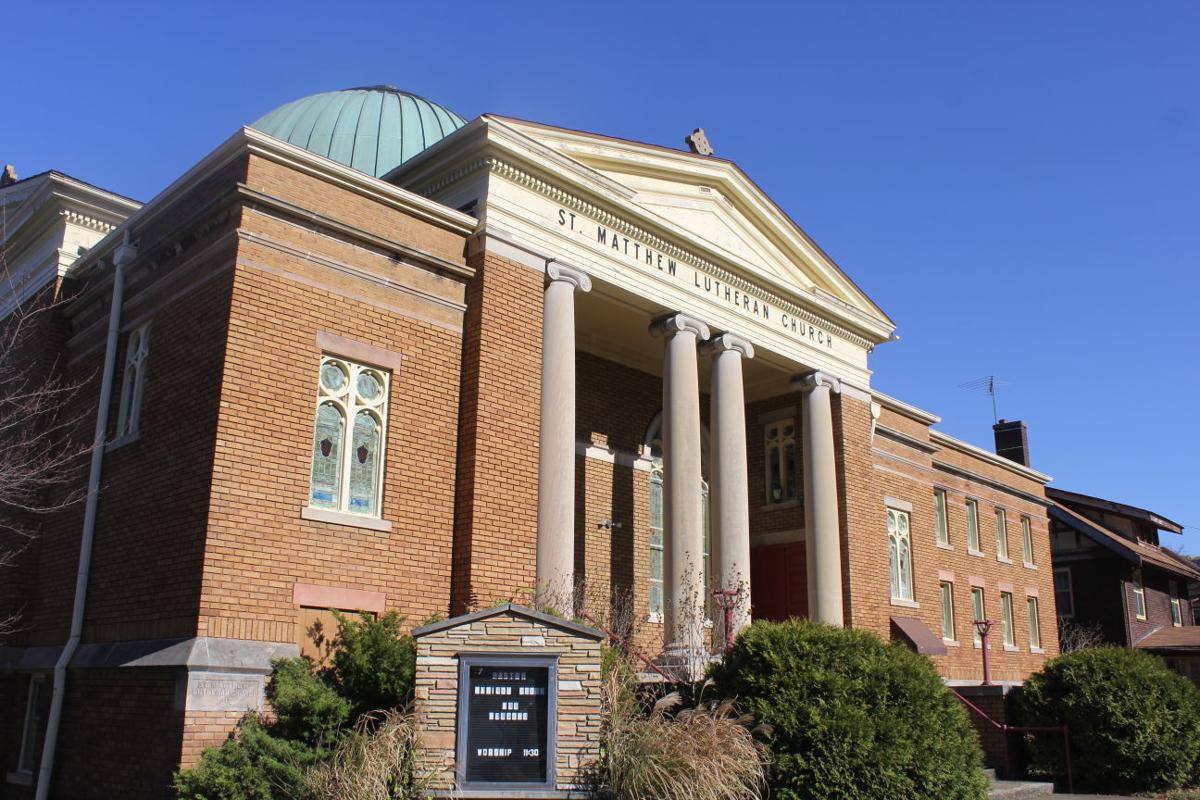 St. Matthew Lutheran Church is located at 426 Sherman Place. The congregation has dwindled and the church will close at the end of the year. 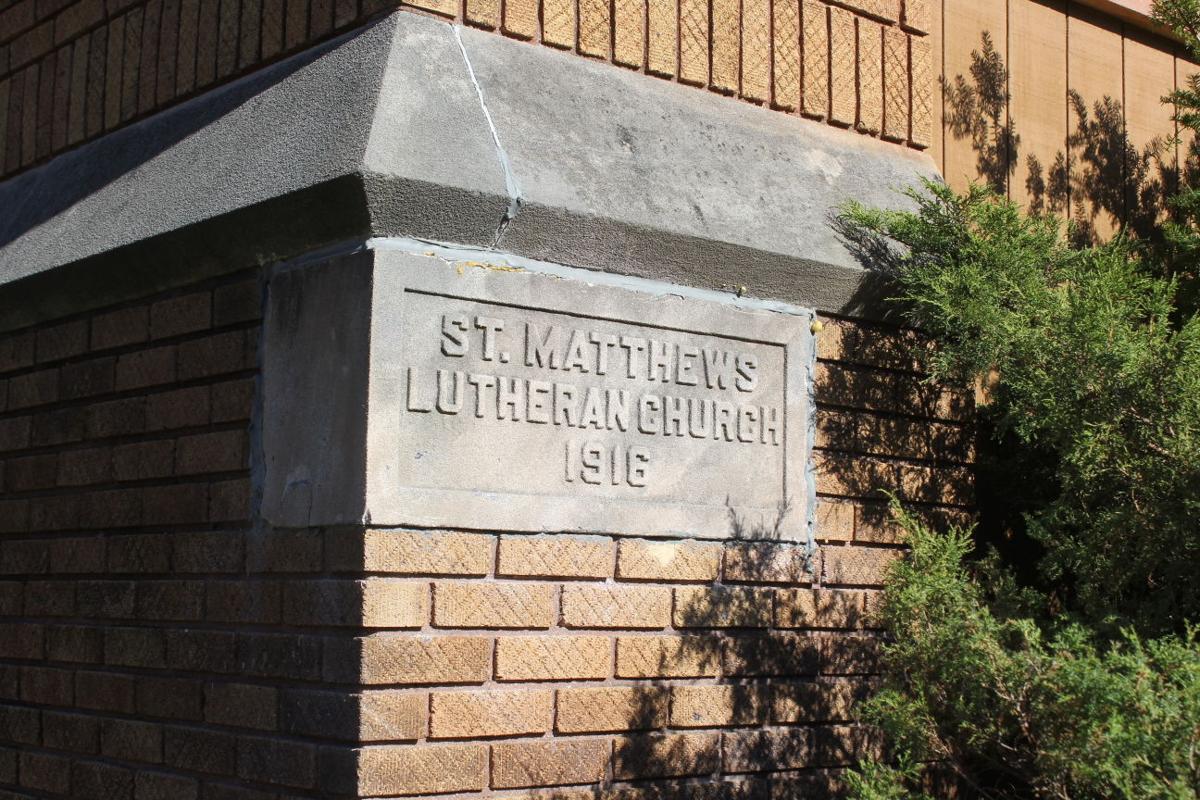 The cornerstone is now back in place.

During a church service appropriately named, "Cornerstone Sunday," church members Ron Pittenger and Brian Armstrong removed items from a copper box that had been contained in the church's cornerstone for close to 100 years.

Also included was an article titled, "Proposed St. Matthew's Lutheran Church" with an artist's rendering of the building.

"This church is Romanesque and Greek Classic with a colonnade on south which forms the main entrance. The auditorium is designed in the shape of a cross, spanned by a large dome 30 feet in diameter," the article states.

Pittenger pulled a copy of the "American Lutheran Survey" from the box, saying, "It's a weekly review of world progress and problems from the Christian standpoint." The issue date was Oct. 11, 1916.

There were documents and photos related to the church's establishment, including a list of the church members' names in the box, as well.

"I remember some of these names from my grandmother's time," said Pittenger, a third-generation member of St. Matthew Lutheran Church.

Some postcards were also in the box. An attached note says, "These postcards were contributed by E.E. Weatherby. They were taken by his daughter, Mrs. L.E. Stambaugh, with a 3A Eastman Kodak. Should any of these people be living when this stone is opened, please make it a point to give these photos to them, or at least to someone who is related to them.

"All honor to Rev. A.C. Miller, pastor of the church. We believe no other pastor could have done this great work as he did," the note adds.

Pittenger said he became aware of the box from the church's minute books dating back to the time when the church was built. "As I was reading through them, there was a page in there where they had purchased a copper box to put documents in at the cornerstone," he said.

"The box was actually in the bottom of the cornerstone and it was shimmed in there," Pittenger said.

Pittenger said the items will be donated to the Ohio Genealogical Society in Bellville.

"Sometime between 1908 and 1915, the St. Matthew congregation decided to build a new church and sold the Park Avenue property with 'immediate possession' going to the new owners. As a result, services were temporarily held in the Odd Fellows Hall on South Diamond Street, the booklet says.

It adds, "In 1915, a committee was appointed to secure a building site for a new church and parsonage. Eventually several lots were purchased at the corner of Penn Avenue and Sherman place in a growing upper middle class neighborhood."

The cornerstone was laid on Oct. 25, 1916. The congregation continued to use the Odd Fellows Hall until the church was completed in 1918.

Future of the church

St. Matthew Lutheran Church will be closing at the end of the year, Pittenger said.

"We don't have much of a congregation left," he said. "We only have about 10 or 12 members who attend, which is one of the reasons why we're closing."

The church building is being donated to New Life International Deliverance Ministries. The overseer of this ministry is Tommie Carter and the pastor is Kim Harris Carter. For more information about this ministry, visit www.newlifestarts.org.