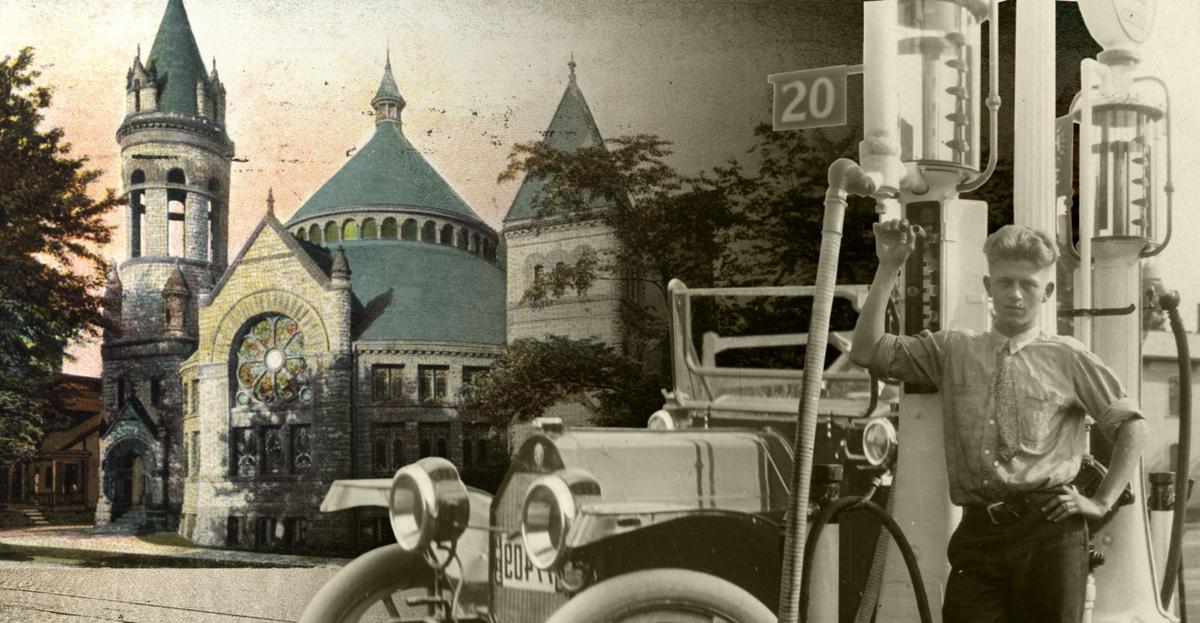 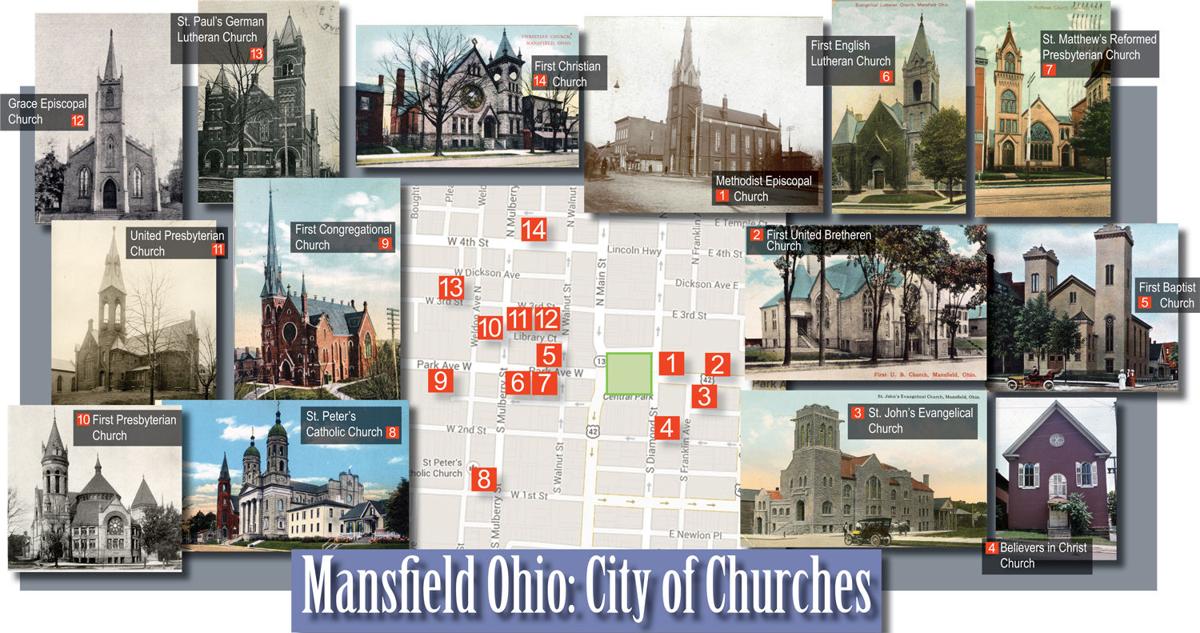 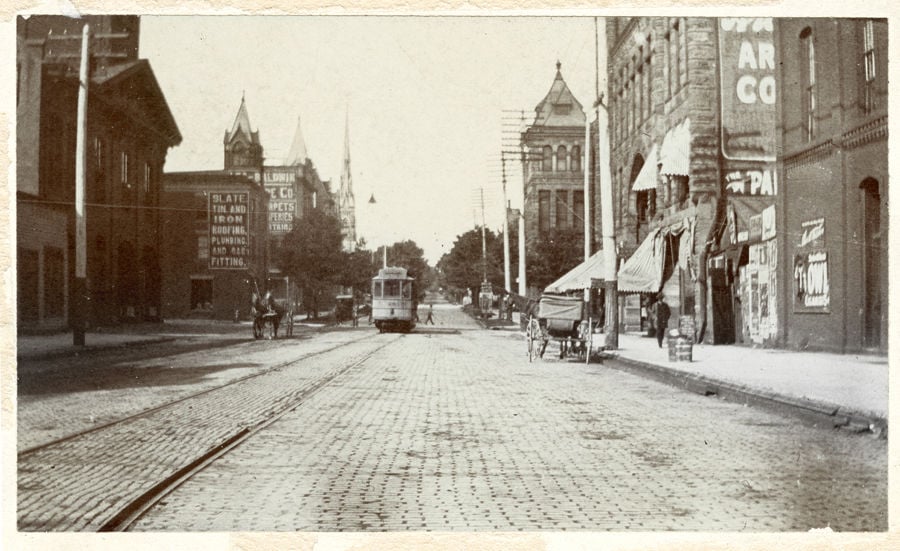 Looking out Park Avenue West from the Square there were three steeples visible on the south side of the street: Presbyterian, Lutheran, and Congregational. 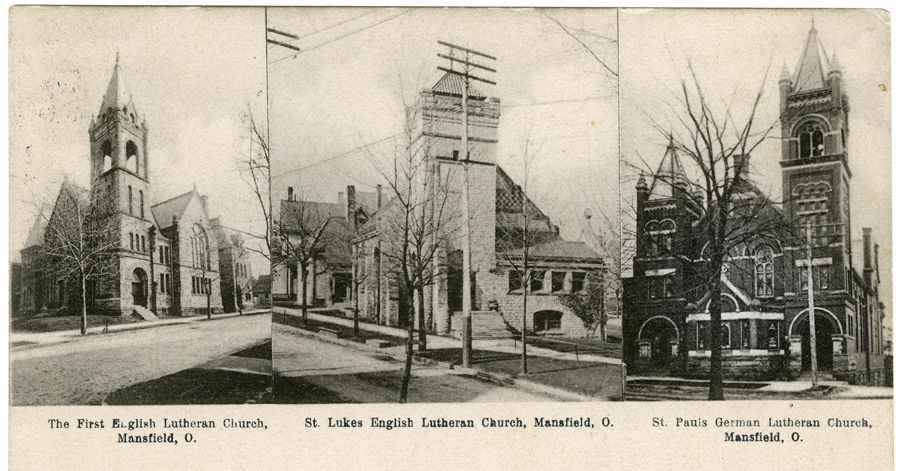 There were 3 Lutheran churches visible from the corner of Mulberry and Park Avenue West. 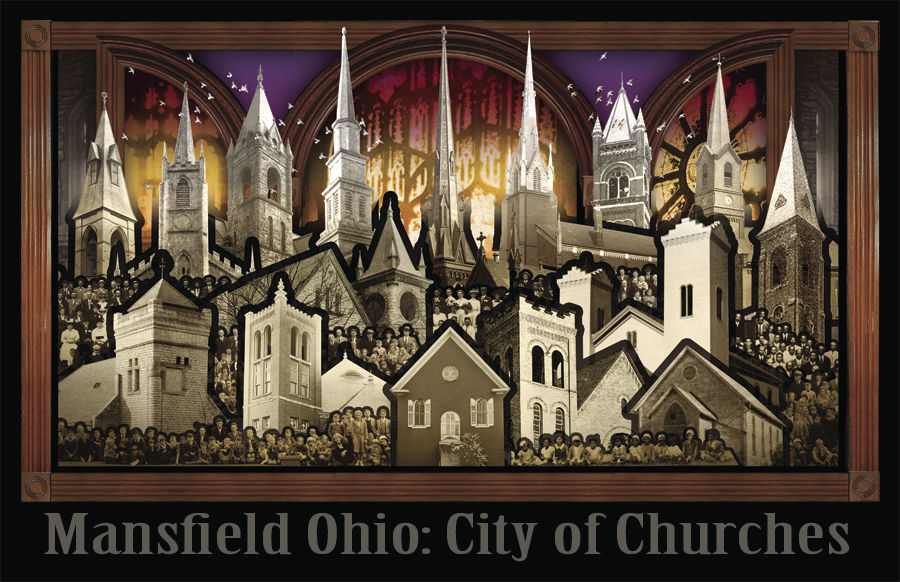 A massive mural depicting the steeples of downtown Mansfield hangs in the sanctuary of St. Luke's Point of Grace (corner Marion and Park Avenue West.) 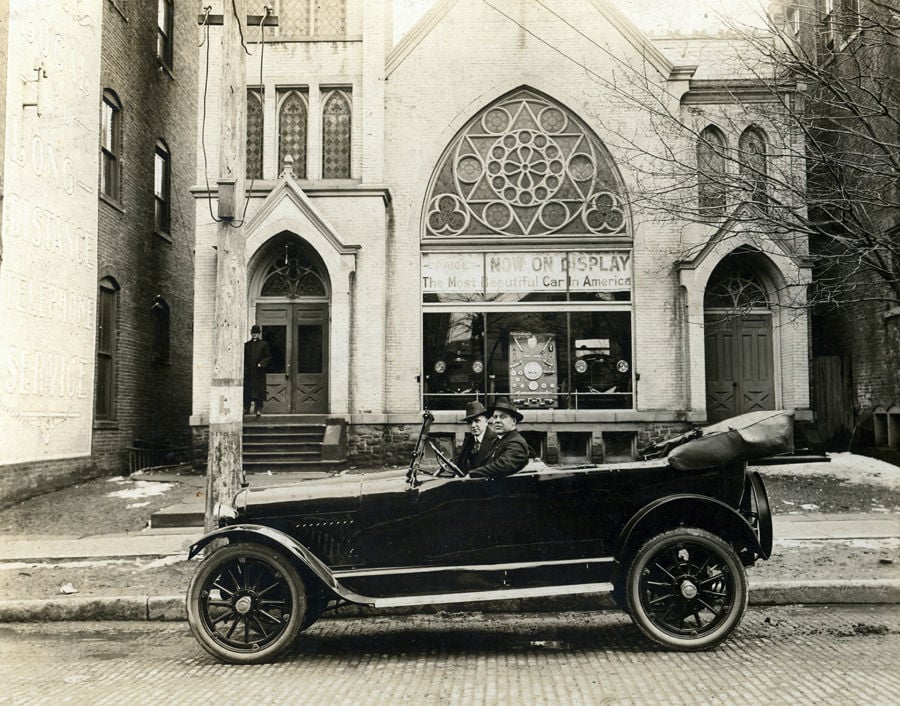 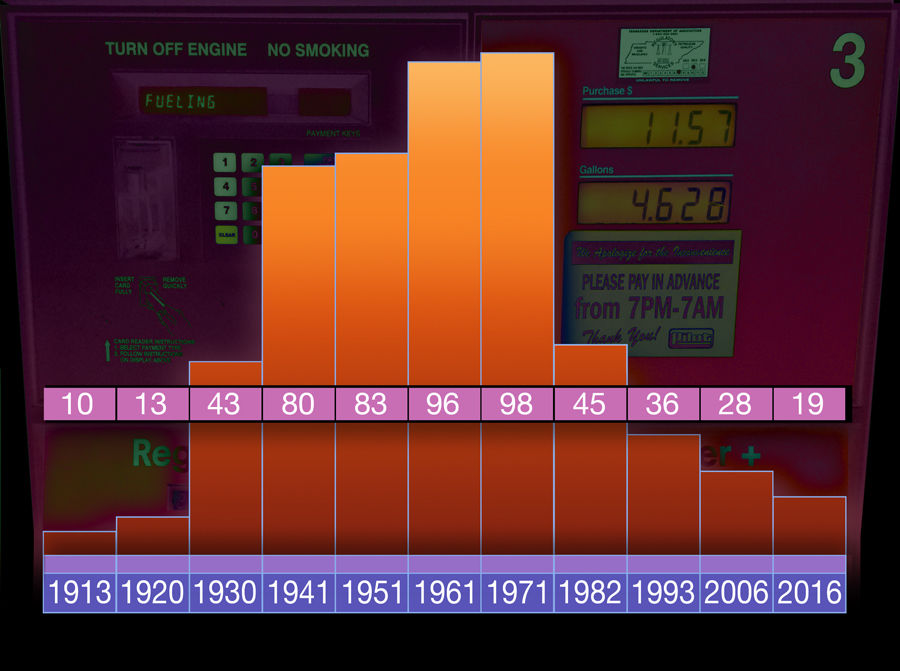 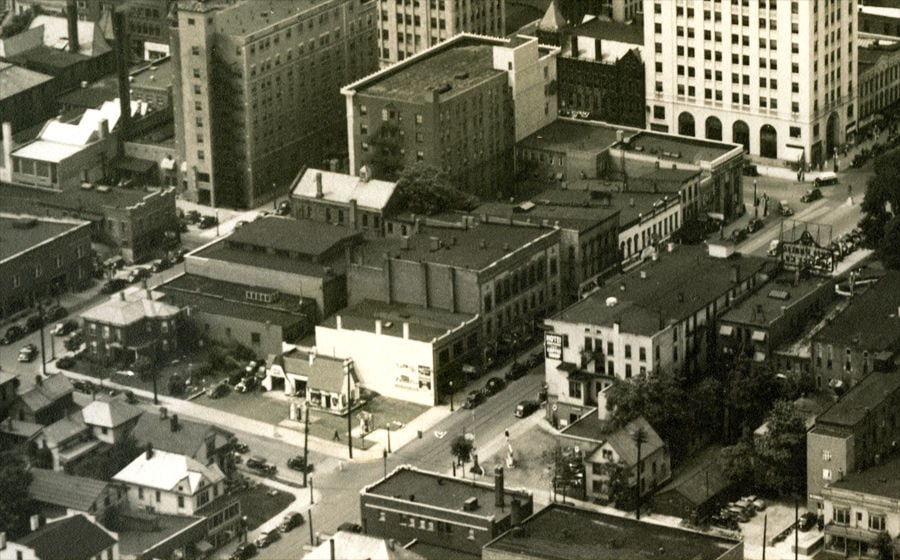 The foreground of this 1930s view of downtown shows a tiny filling station at the corner of Second and South Main Streets.  There were dozens of these small stations dotting the corners of the city. 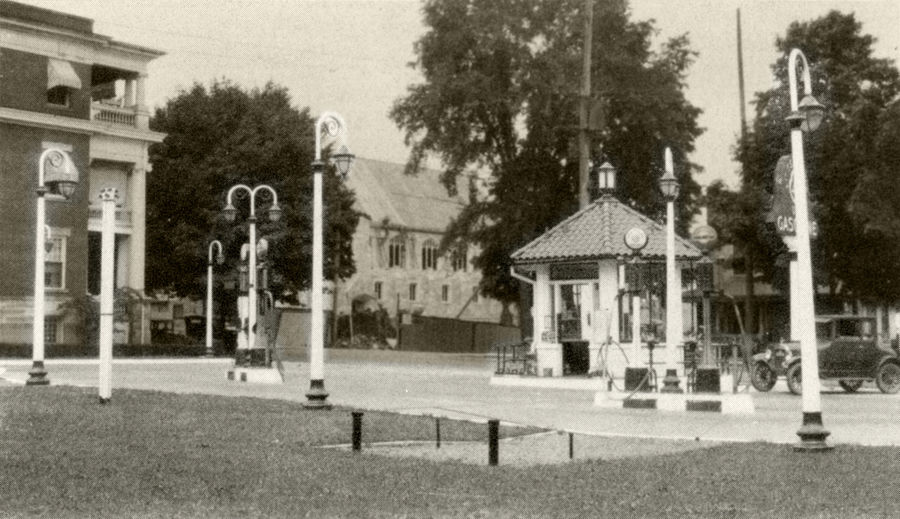 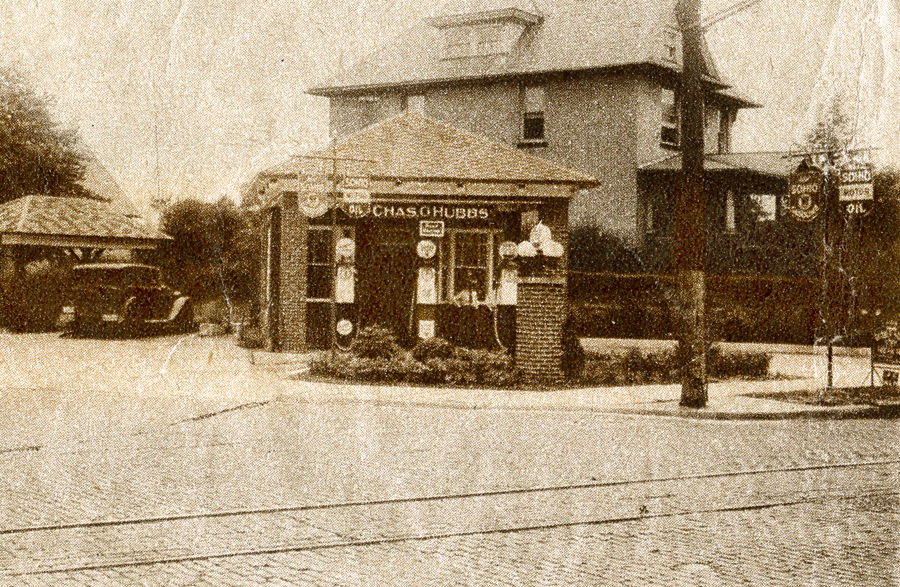 Charles O. Hubbs Gasoline in 1934: at the corner of Adams and Orange Streets.

The first service station to break into residential neighborhoods was the Sinclair on Park Avenue West (across from the Renaissance Theatre.)  Neighbors were horrified when the stately old Purdy mansion was torn down to make room for the modern age. 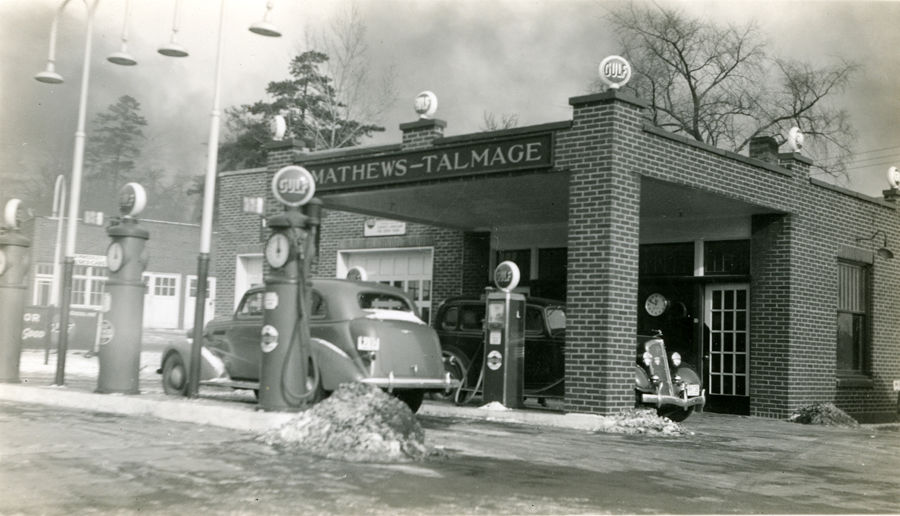 There has been a filling station at the corner of North Mulberry & Surrey Streets for most of the last 100 years.  Here it began as an early Gulf station. 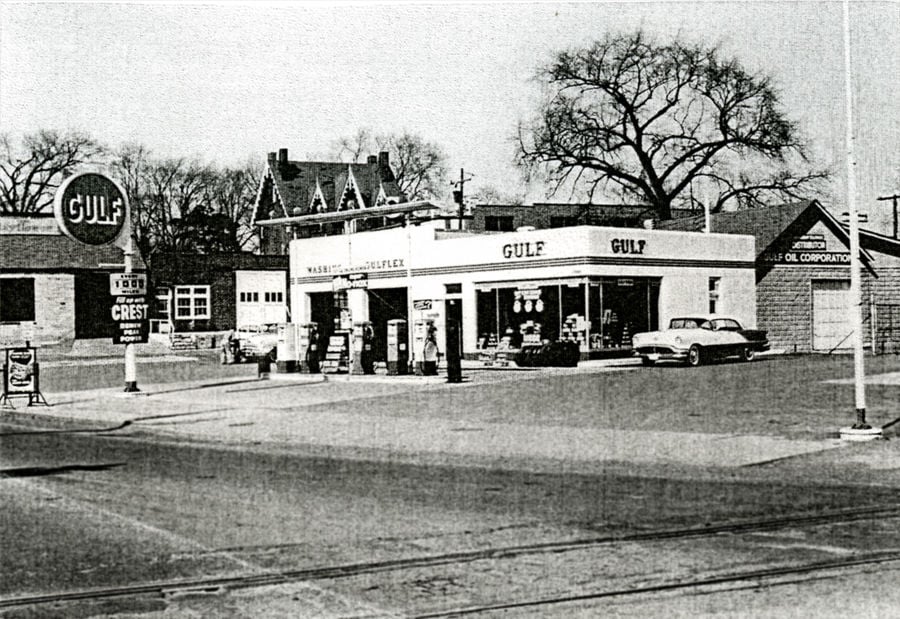 Here is the same corner of North Mulberry and Surrey Streets after an update in the 1950s. 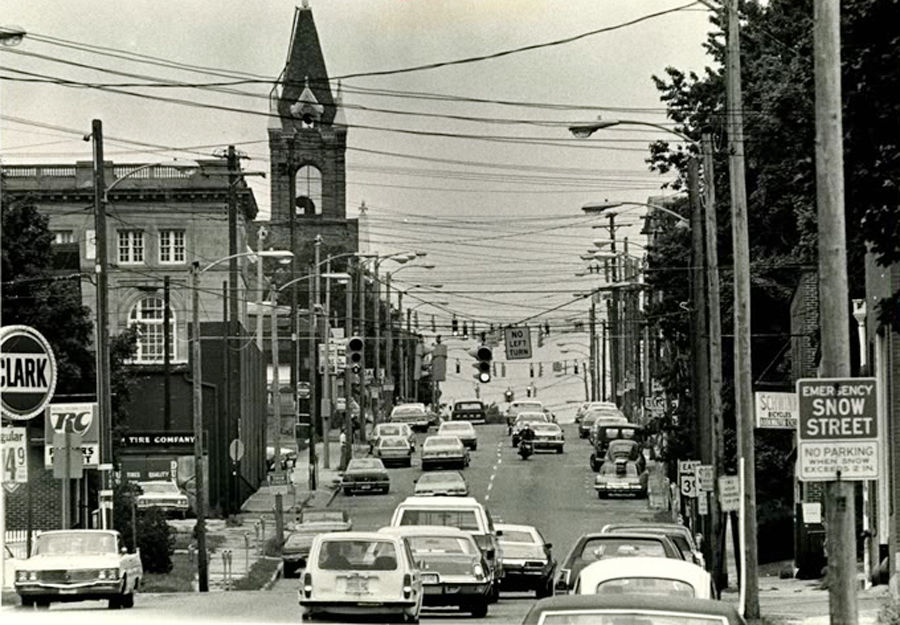 In the 1970s there were still gas stations every few blocks downtown.

The corner of Park Avenue West and Trimble Road today. 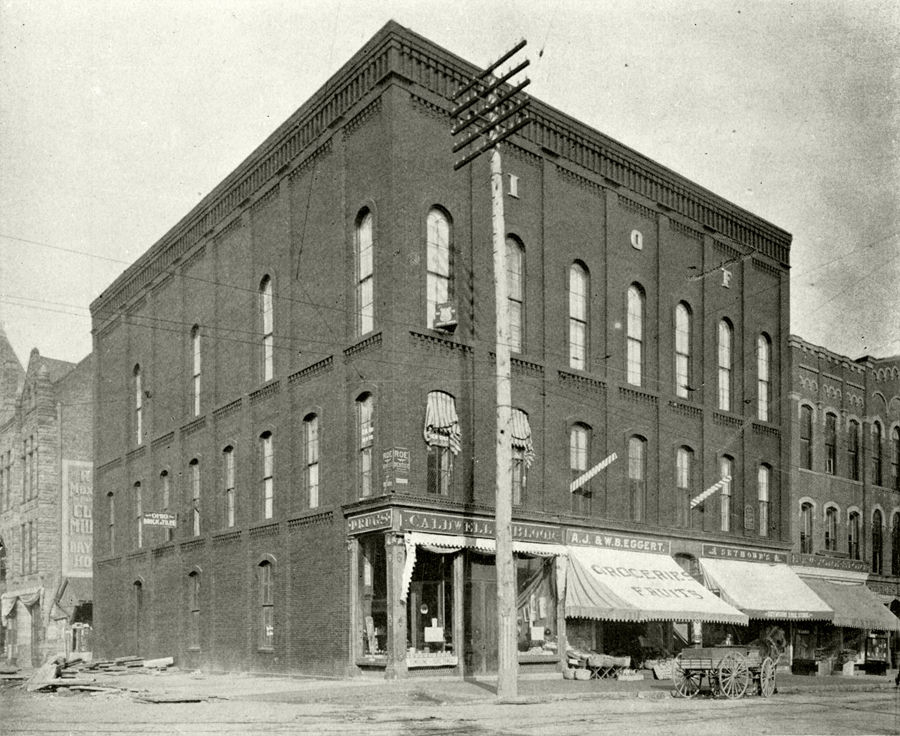 Mansfield's most prominent 'corner drug' store was on the Square: Caldwell & Bloor Drugs on the corner of Main & Park Avenue, where Richland Bank stands today. 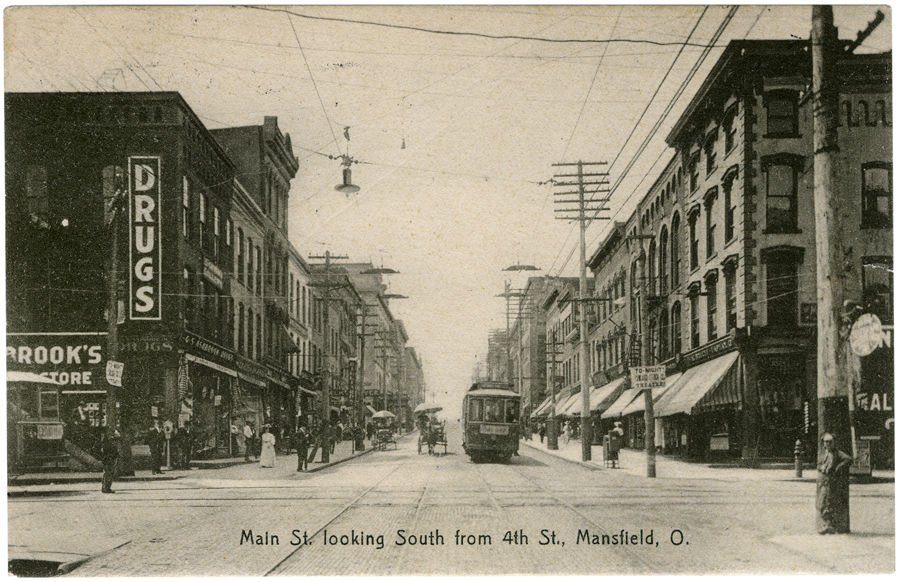 As long as there was a building on the SW corner of Fourth & Main it was a drug store.  It had different names in different generations: in the 1910s it was Brook's. 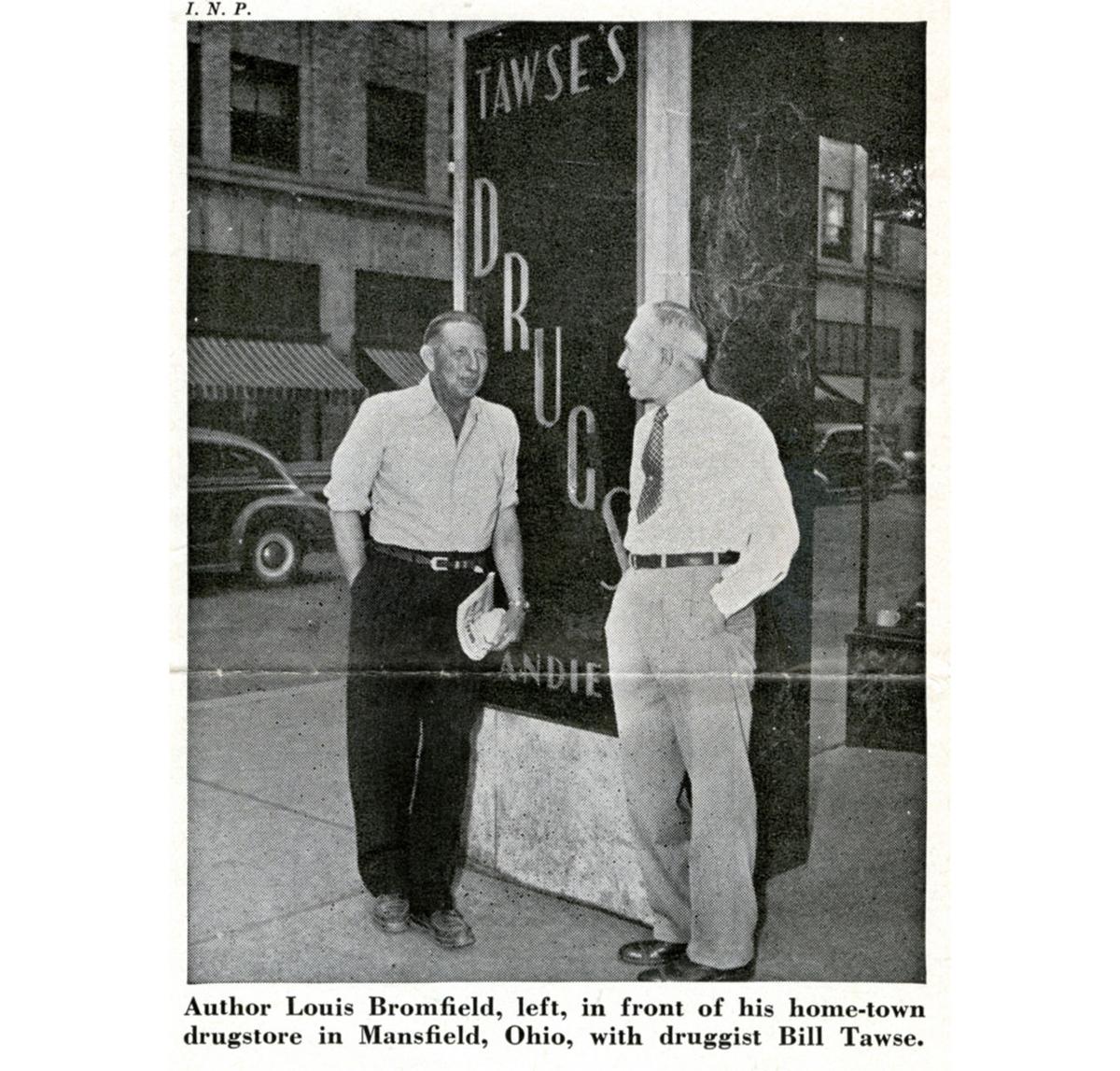 At the corner of Walnut and Park Avenue West, in the Leland Hotel, was the Tawse drug store.  This image taken from a magazine clipping by Louis Bromfield titled, "My Favorite Druggist." 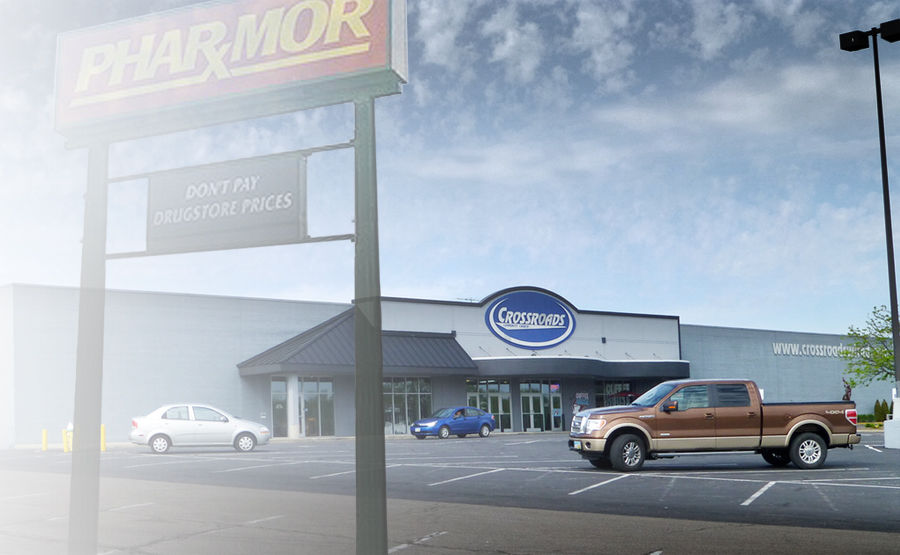 Crossroads Community Church on Park Avenue West was once a PharMor.

I had a friend who spent most of the 20th century in Mansfield.

She lived nearly a century herself, and so she was a witness to the epic pageant of history that was America in war and peace; for richer for poorer; in all its glory and fluctuating hemlines.

She had seen about everything.

One day we were discussing the ways in which Mansfield had evolved during her lifetime and she made a comment that has stuck with me all these years since she has been gone.

A church on every corner

When my friend was a young girl in the first decades of the 20th century the city of Mansfield went by a number of different titles and nicknames. These names were more or less formal according to where they appeared.

One of the most common appellations that was used in newspapers around the US when referring to Mansfield was, ‘City of Churches.’

The name was initiated by visitors who came here for the first time. Arriving by train, and then ascending from the depot up into town, the first thing they noticed was the great preponderance of church steeples and spires that punctuated the skyline of downtown.

There was a time in the1910s when a sightseer downtown could stroll past no fewer than 14 churches within an area encompassing no more than four blocks in any direction from the Square.

Standing on Mulberry Street any viewer could see 9 churches from one single pavement block on the sidewalk by simply turning in a circle.

By the time American society had fully transformed to complete automobility in the middle of the 20th century, most of the downtown churches had migrated out into the suburbs.

There were no fewer congregations in Mansfield when all the church bells left downtown, they were simply no longer so prominently evident.

A gas station on every corner

For some reason the makers of postcard views of Mansfield were less inclined to take pictures of filling stations than they were to photograph churches, so the gas station era of the city is not as well documented as the City of Churches.

There is a terrific photo however, taken around 1920, that perfectly captures the transitional decades when automobiles were slowly subsuming Mansfield culture and streetscape.

It shows an automobile sales and service station on Park Avenue West that was housed in the former sanctuary of the Reformed Presbyterian Church.

Here are the numbers that document the rise and fall of the filling station in Mansfield.

A drug store on every corner

During the post WWII transformation of Mansfield’s business districts—when stores moved from downtown out to the shopping centers—there was a significant portal that served as a landmark in time and space. It was at the corner of Park Avenue West and Trimble Road.

Westward from that intersection was the ‘Miracle Mile,’ created with seas of asphalt lots so all the new cars in town would have a place to park when folks were shopping.

The line where old Mansfield stopped and the Miracle Mile began was Trimble Road, and so this transitional threshold was gated with an appropriate landmark. Like the welcome sign to a new world, almost like a symbolic gesture—a cornerstone marking the next age—the most prominent corner had a shining new Texaco station.

They wanted it on the corner as an obvious demarcation between the residential city and the new land of commerce.

Significantly, at least in terms of this short essay, this very same intersection at the gateway site is today occupied by two pharmacies.

This is the cycle we are following: churches to gas stations to pharmacies.

Interestingly enough, in the 2010s the city has come full circle. In the 21st century a large building on Park Avenue West that was formerly used as a pharmacy has found its next life repurposed into a prominent Mansfield church.