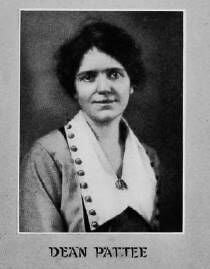 Like many, I am mostly staying home during the COVID-19 pandemic. Normally, I would be working on getting an urban history museum going in Cincinnati, writing a dissertation, prepping classes for summer and fall, and being a single mom in the usual way.

Instead, what I notice as this crisis continues is that the work of the house is taking over. There are more dishes to do, more meals to cook, more hours in which my child needs to be entertained, and so my professional work has to give way.

This is a real-life illustration of the subject of one of my dissertation chapters: a lesbian couple in the 1910s and 1920s who created rich lives of work, activism, and civic engagement largely by freeing themselves from the drudgery of housework to allow the work of their minds and hearts to flourish.

Before I tell you about them, I want to note that I call them lesbians, because that is what we would call them today, but doing so puts me on the tricky footing of applying a contemporary label to people in the past. When Loueen Pattee died, Mary MacMillan wrote poems about how she wished she could kiss her and how she couldn’t bear to see her shoes under the bed. So, I call them lesbians, but they wouldn’t have used that word themselves and it may denote things today that wouldn’t have applied in the past.

In the 1920 census, Mary MacMillan and Loueen Pattee were listed as “partners” (though some census official later crossed out “partner” and replaced with “boarding”). Together they were deeply involved in civic and artistic life, including suffrage activism. They had time to do this work because they were free from the demands of heterosexual marriage and lived in a place where their needs could be met with minimal housekeeping.

Though I find this pair extraordinary, many women in this era enjoyed what historian Trisha Franzen has called “as close to a golden age for independent women as can be found in United States history.” In fact, she says, “the generations of women born between 1865 and 1895 had the highest proportion of single women in U.S. history,” peaking at 11 percent for women like MacMillan and Pattee, born between 1865 and 1875. These women were the drivers and beneficiaries of a shifting range of opportunities for women to support themselves outside of married life.

Outside of suffrage activism, MacMillan and Pattee made scads of civic contributions. MacMillan was a founder of the College Club, an early member of Cincinnati’s MacDowell Society, and a guiding force in the Ohio Valley Poetry Society. She brought famous poets to Cincinnati for sold-out readings, sponsored a working group for local poets, and wrote plays to be performed as fundraisers for many local women’s organizations including the Consumer’s League, which advocated for the rights of “shop girls.”

Loueen Pattee came to Cincinnati in 1916 to replace fierce women’s rights advocate Emilie Watts McVea as Dean of Women at the University of Cincinnati. McVea left to become the second president of Sweet Briar College. Before coming to U.C., Pattee lived in Munich, where she ran a school for American girls and, when World War I broke out, a Red Cross hospital. Her life in Cincinnati included leadership in a U.C. scholarship fund for French women to continue their studies through the war, and in the Woman’s City Club, where she taught a course in suffrage in 1918. At U.C. she taught romance languages and art history in addition to her role as Dean.

I am drawn to MacMillan and Pattee because their lives were both ordinary and extraordinary. They went to work, did the shopping, cooked meals, had adventures with their friends, wrote letters, and explored their city and their world in much the way I might live today.

They also entertained luminaries like Jane Addams and Edna St. Vincent Millay. And they had an impact on suffrage in Ohio.

In 1912 Ohio attempted to amend the State constitution to give women the right to vote through a referendum of the state’s voters who were, of course, all male. This issue, known as Amendment 23, went before the state’s voters in September of 1912. The referendum failed with 57% voting against the change. During the 1912 campaign, Mary MacMillan served as Chairman of the Press Committee of the Women’s Suffrage Party of Cincinnati. As such, she wrote regular newspaper columns and responded to questions and attacks about women’s right to vote.

In one of these columns, MacMillan wrote something which strikes me as relevant in today’s COVID-19 world, she said, “Shut a man up in a hothouse with four small children, peach preserving, and picture hats alone for one day and see what he will say about women’s sphere and its ennobling effects.”

One of my favorite impacts of this otherwise tragic COVID-19 crisis is that many of us are spending our time walking miles in the shoes of caregivers and teachers and finding out just how hard this work actually is. MacMillan pushed the voters of Ohio to “give woman a taste of science, of knowledge and thought of history, business, politics, of activity with other inspiring minds in the world and see if she wants to return to the narrow life in which she has been held fast … It isn’t the home that is in danger, it is the woman.”

I can only guess how hard it was for her to read the articles written by “antis” that ran beside her columns. They argued, “political responsibility for women will eventually work great harm to women, and through them cause a marked deterioration of the race,” and they inextricably believed that women should leave politics to men since political work was, “difficult and dangerous because of the nervous tension involved.” They urged men to, “protect us as far as they can in this emergency,” and misrepresented other members of their sex by asserting, “we women realize that government rests upon force, upon power of muscle, brain and money. We know that we cannot bring to government any of these essentials.”

These arguments must have infuriated Mary MacMillan, and yet her responses to them were calm. She did mock the antis on one occasion, writing, “we wish the refined, frail, home-loving anti could send her vote in scented lavender note paper to the polls, while she goes down and elbows her way through the Sixth Street Market.”

But most of her columns stayed on message and presented arguments that were both poetic and persuasive. On Aug. 18, 1912, she wrote that woman had “come to need political recognition and to want to take her share in the great public housekeeping.” She believed that “suffrage is the next step in the development of women,” and linked it to modernity and progress. She wrote, “suffrage as a radical issue . . . is modern. That is why people are afraid of it. It is new. They are not used to it. It makes them uncomfortable to think of it like a fresh-starched shirt after a bath.”

I love the housekeeping metaphors and the way she ties the familiar experience of a starched shirt, which everyone would have known would become more comfortable over time, to the chaffing of modernity against old-time lavender-scented Victorian sensibilities.

The Ohio amendment didn’t pass in 1912 or in 1914, but the national movement gained momentum, notably in the middle of a pandemic. In 1918 when the U.S. Senate rejected the amendment that would later become the 19th Amendment, the Cincinnati Enquirer reached out to Loueen Pattee for comment in her role as Dean of Women at the University of Cincinnati.

She said, “Since the United States Senate has disposed of the women question, I suggest it now turn its attention to the Spanish Influenza. Of course, it is quite probable both disquieting disturbances will return next autumn.”

She was right on both fronts. Though she deflected the question of suffrage, presumably because she felt hamstrung by her administrative position at the university, she then wisely called for her legislators to take leadership on the international pandemic at hand.

I spent my day today wondering what Loueen Pattee and Mary MacMillan would be doing right now to care for those around them and to advocate for change in the COVID-19 crisis. Women have the right to vote thanks to thousands of local activists like MacMillan and Pattee. It is our responsibility to use that vote responsibly to care for our sisters and brothers through good works and good leadership.

Anne Delano Steinert is a preservationist, educator, and historian whose work focuses on the built environment in urban America. She holds master’s degrees in historic preservation and urban history and is currently finishing a PhD in urban and public history at the University of Cincinnati. She is the founding Board Chair of the Over-the-Rhine Museum and the curator of three recent exhibitions on urban growth and change in Cincinnati including the award-winner Finding Kenyon Barr: Exploring Photographs of Cincinnati’s Lost Lower West End. She teaches at the University of Cincinnati and Xavier University. On top of all these projects, Steinert’s most challenging and rewarding position is as mom to 9-year-old Seneca.