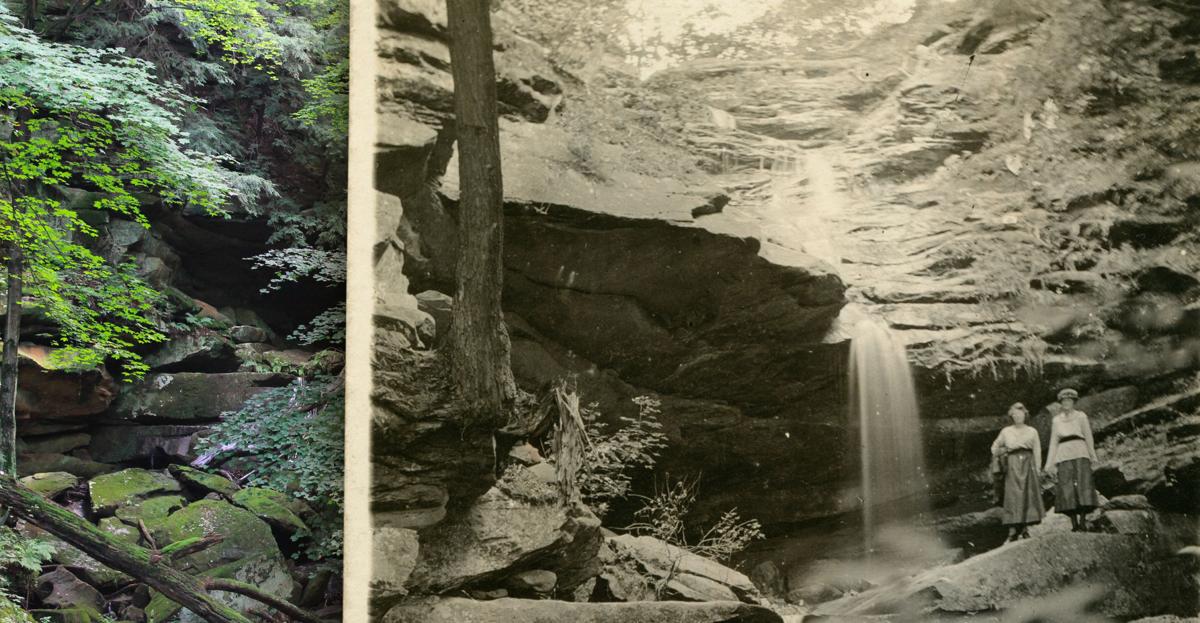 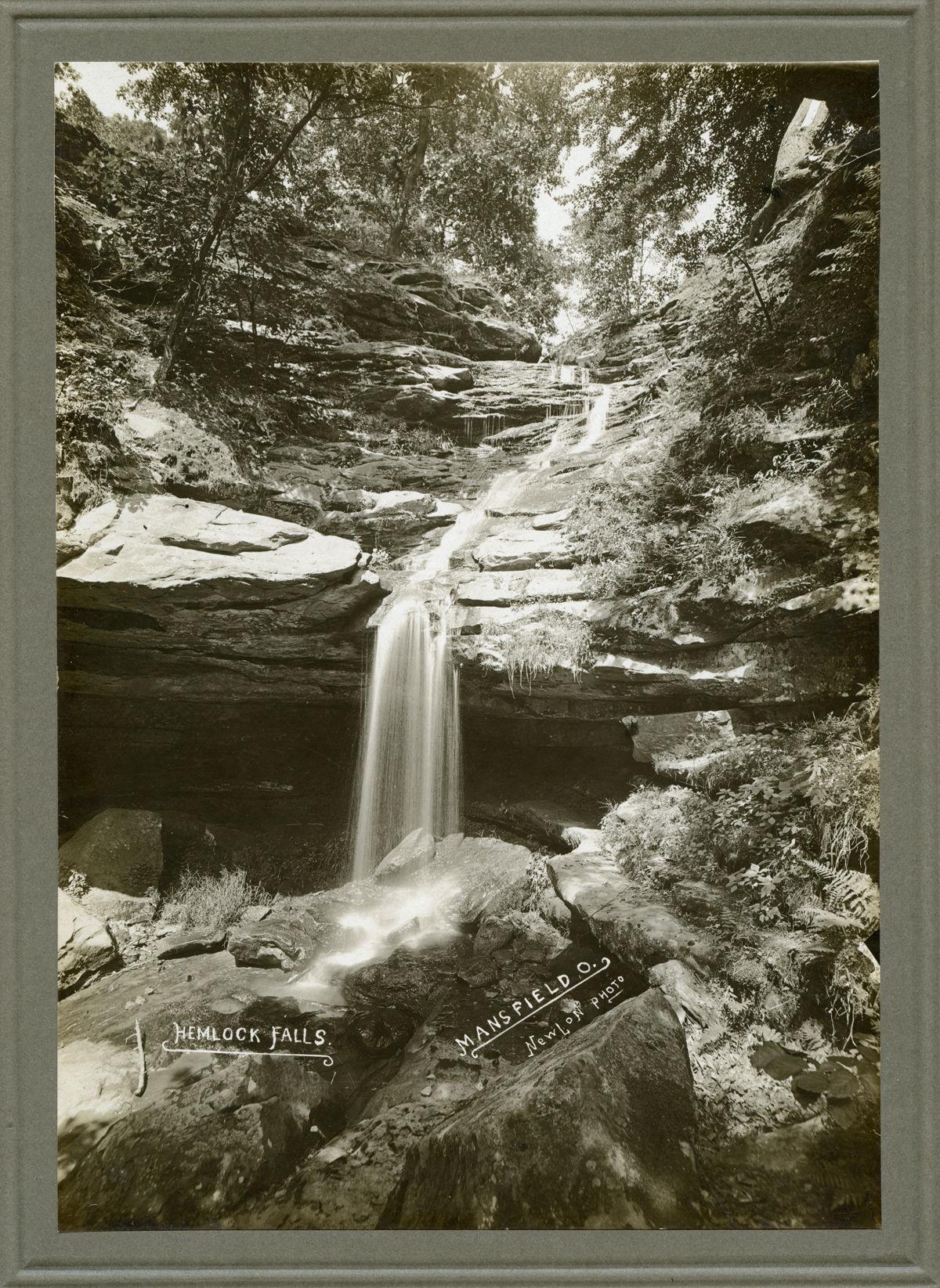 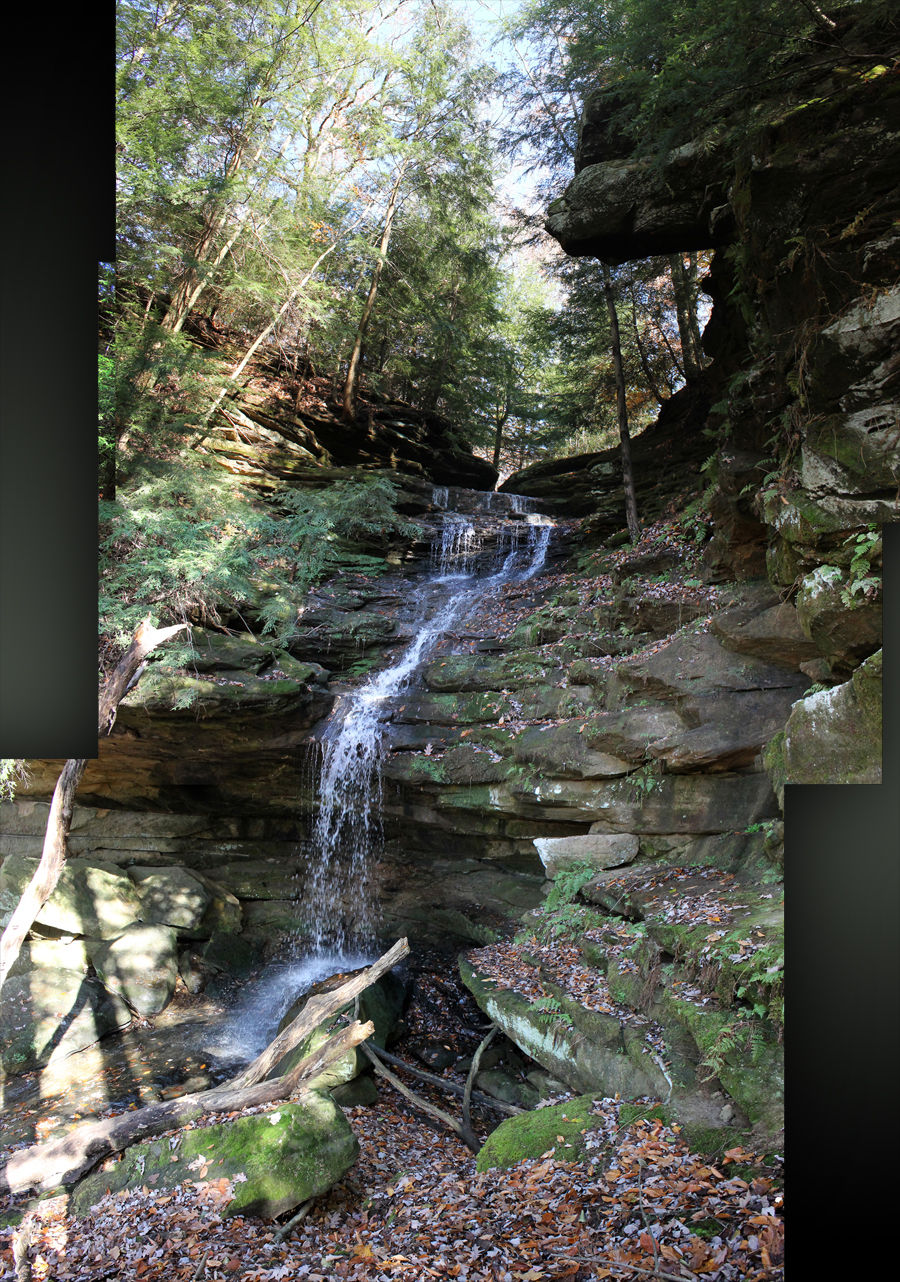 Any idea why we are all attracted to waterfalls?  According to scientists it has to do with negative ions, created by water tumbling to change the electric charge of the atmosphere.  Positive ions, most often present in an atmosphere that doesn’t move, makes people cranky.  Surrounded by negative ions, however, created by breezes and falling water, people feel more vibrant and clear-headed. 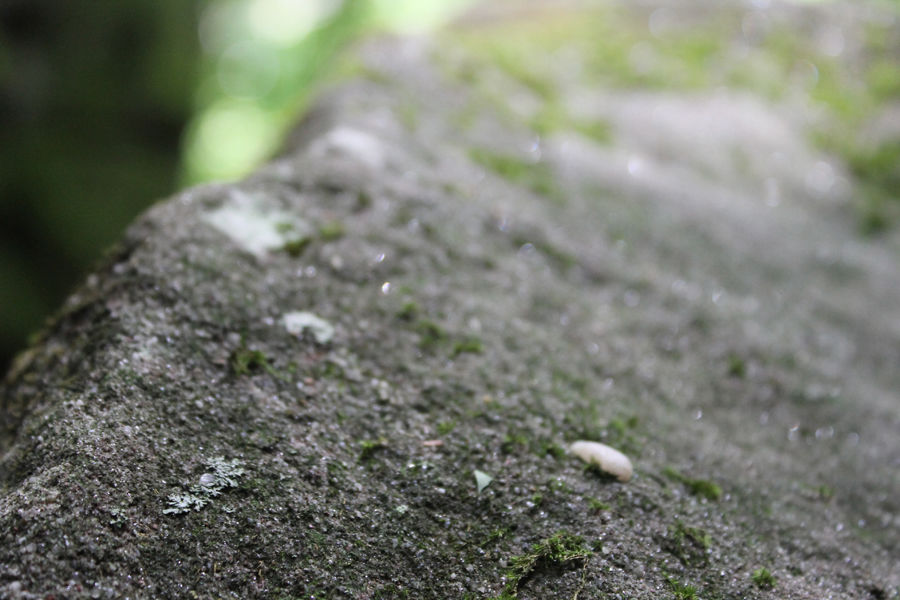 If you look closely at the sandstone cliffs of Hemlock Falls, you’ll find small white smooth pebbles embedded in the rock walls.

These are very old polished quartzite: the last remnants of the Acadian Mountain Range that once rose along the eastern coast of America.

As the ancient mountains eroded away through the eons, you might have picked up these pebbles next to a great inland lake on a sandy beach...that eventually turned to stone and is today the sandstone cliffs of southern Richland County. 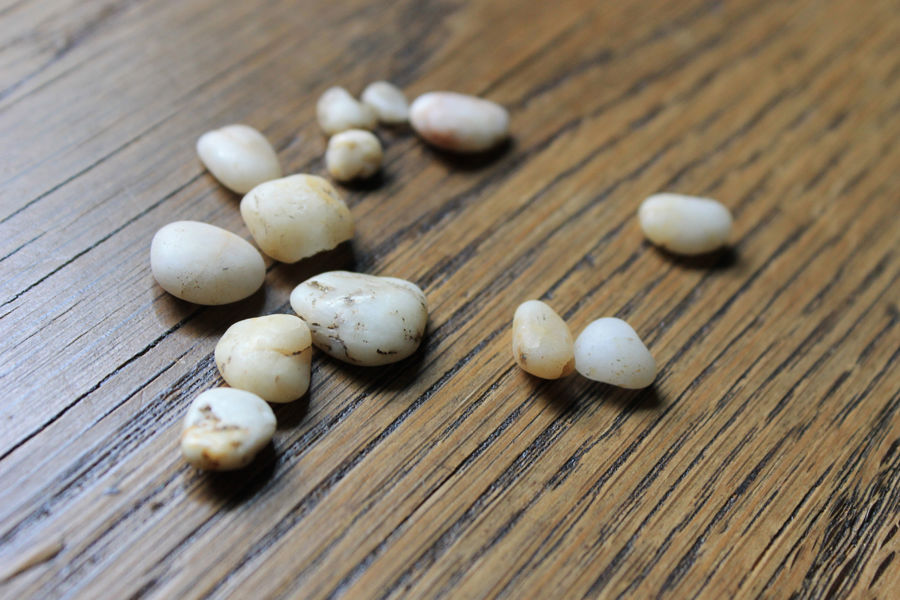 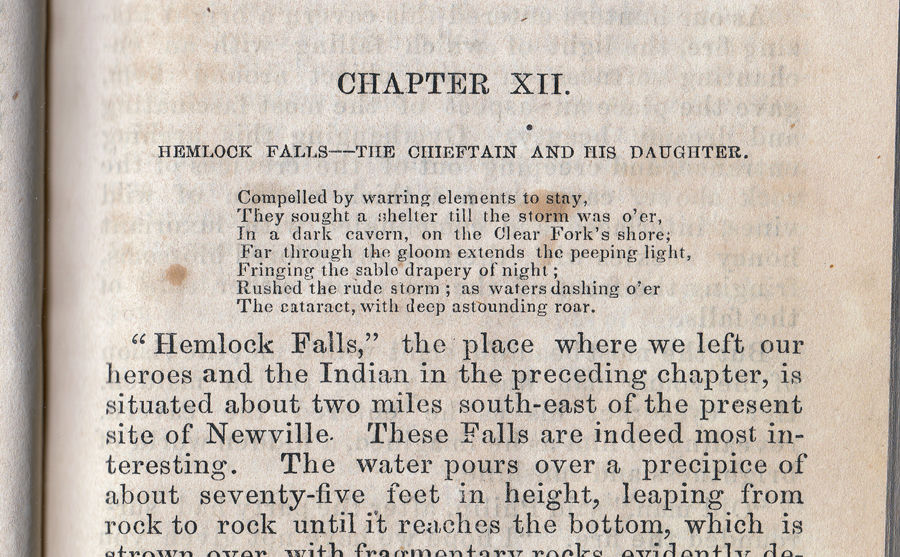 When James M’Gaw’s novel Philip Seymour was published in 1858, he established a reputation for Hemlock Falls as the familiar resort of Indian Chiefs, pioneer sweethearts, and, of course, Johnny Appleseed. 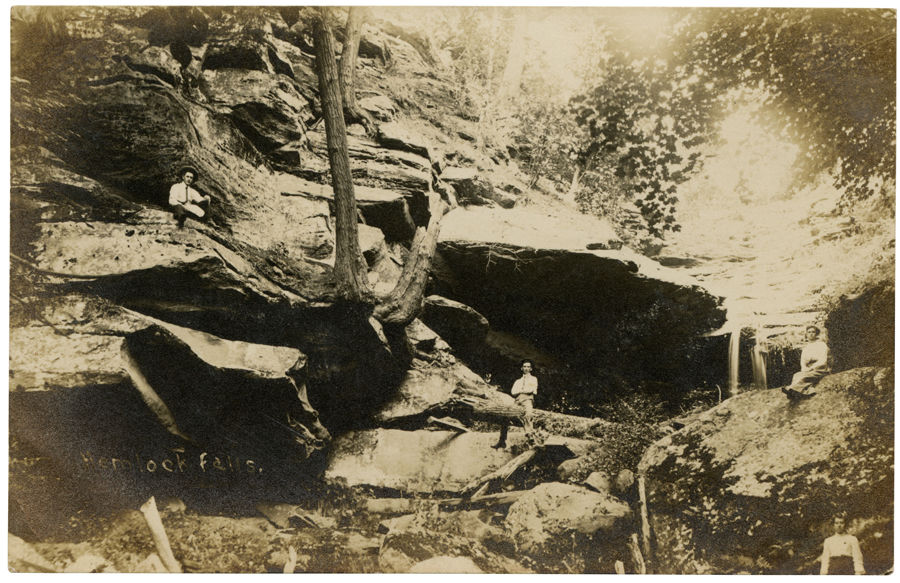 To understand how popular Hemlock Falls was as a tourist destination in the decades between 1890 and 1930, it is only necessary to count the great many different postcards that were available in those years depicting the falls and its surrounding scenery.  There are dozens of different views, different styles, different variations that folks had to choose from in those days. 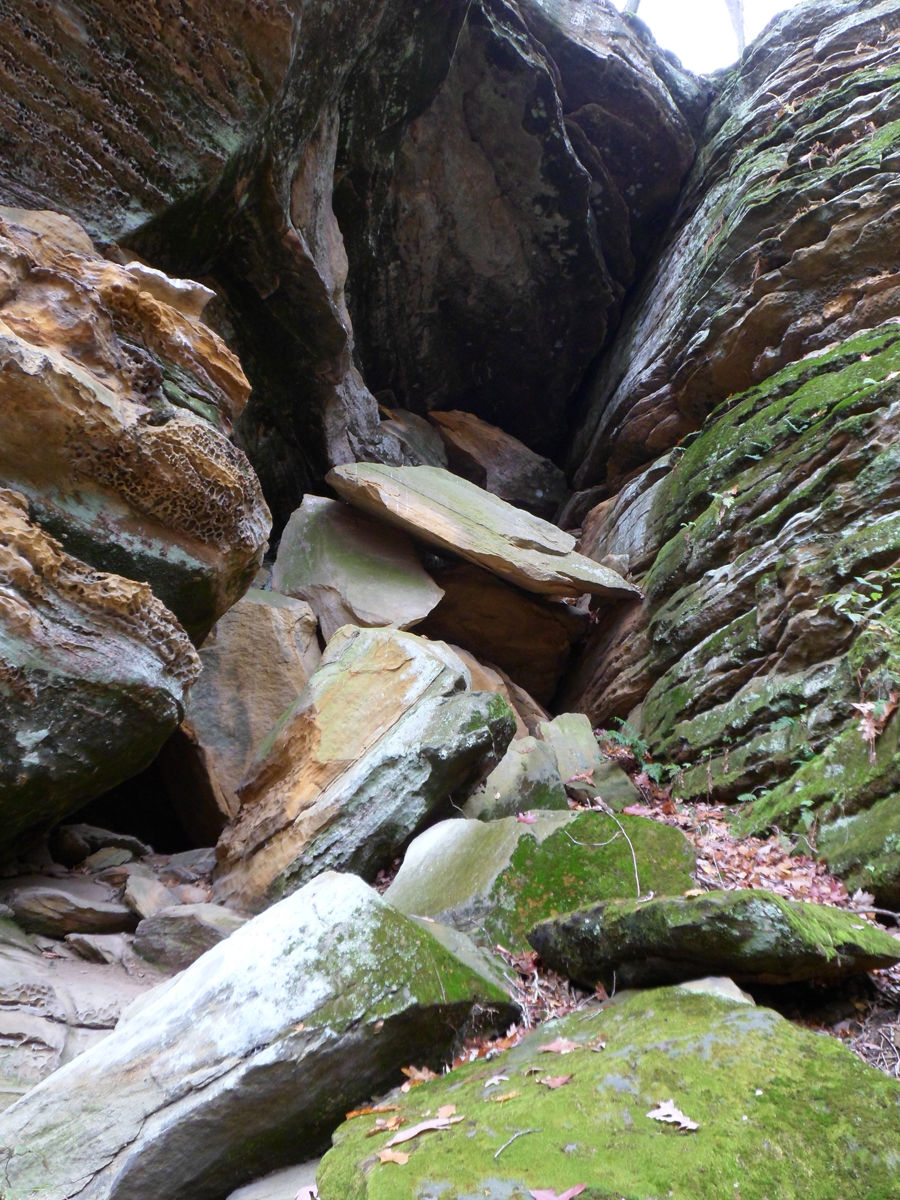 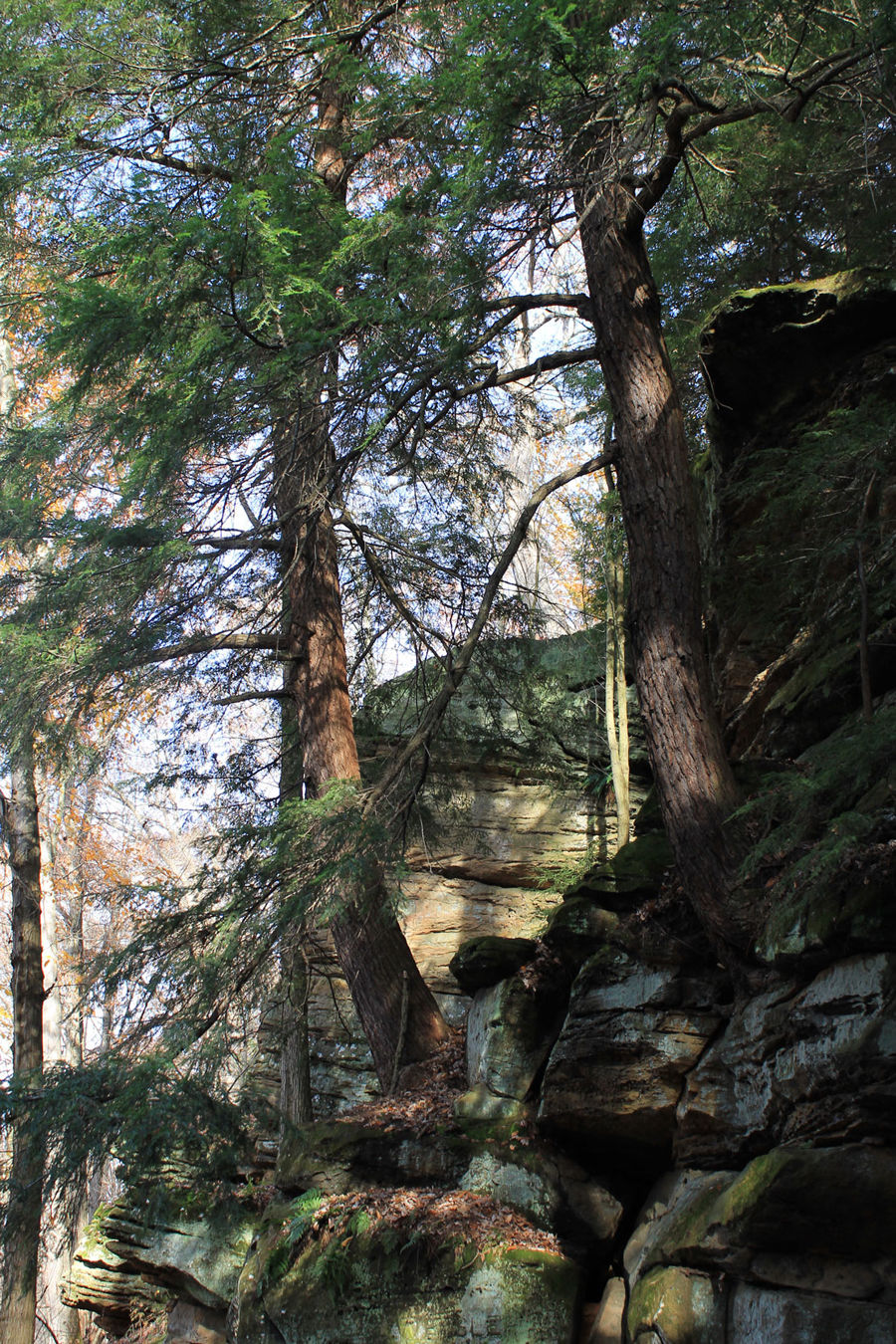 Hemlock trees are common in Canada, but much less so the farther south you travel...because they require a continual source of cool, moist air to propagate in the wild.

The very same conditions that make Hemlock Falls a pleasant home for hemlock trees -- cool, moist air -- is exactly what brought folks to picnic here in the summertime for many generations. 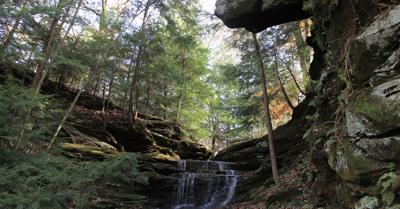 For thousands of years, since the last glacier left Richland County, there has been water cascading over a series of graceful falls amid mossy sandstone cliffs; along the jagged edge of the Mohican River valley, where an ancient stream tumbles through the broken earth.

For roughly the last 200 years, the place has been called Hemlock Falls.

For a hundred years it was found south of Newville and east of Winchester: two places that have not existed for generations, which only adds to the mysterious dislocation of the place in time. Because, even though the Falls has a significant presence on the timeline of Richland history, to go there is like stepping out of time altogether.

There is a primal natural beauty to Hemlock Falls that is completely transporting. Being at the falls is like being in another world, or at least, leaving this world for a while.

That’s why it was such a popular tourist destination for nearly a century, even though it was difficult to reach by carriage.

Hemlock Falls is a landmark of Richland County that goes back to the beginning of our American sojourn in time. It is appropriate that such an old, old crack in the bedrock of the earth should have a venerable and iconic place in our story.

It lends beauty and dignity to the story of Richland’s founding, and a kind of mythic awe.

It was one of those foundational cornerstones of history—all the early settlers were there; all the tribal people of the Mohican area were there.

No doubt all of the paleo people of the Mohican forks were there too, because in the eras before farming culture came to this part of the continent, all of these hills were densely forested: and in a realm where everything is trees, how would you find landmarks except by places where the land is actually marked.

The earth of hemlock Falls is definitely marked.

The bedrock is cracked open and crumbled into pieces so water tumbles over a cascade of nearly 100 feet; and in those long ago days you would have been able to hear the falls from far off through the forest.

Hemlock Falls was created in the wake of an ancient great river that no longer exists; a river that has been gone so long that we know of it only by the prehistoric scars it left on the planet.

To stand in the presence of something that old, that has witnessed so many epochs, is to plug back into the life force of our planet.

Approaching the Falls, and gradually becoming aware of the sound of falling water, there is an awesome realization that this sound is going on all the time; that even when no one is present to hear it, the falls is continually and timelessly singing this primal watersong all through the night, all through the decades and generations; pausing only for brief intervals when ice dampers the tones.

And it has been singing for thousands of years.

There has always been a romance to the Falls, and it was given literary credence in 1858 when a local author used the setting in his popular novel.

James M’Gaw admired the adventure/historical fiction style of James Fenimore Cooper’s Last of the Mohicans, and, living in a county in Ohio that had a history generous in mythic characters like Johnny Appleseed, he undertook to immortalize our area in print. His book, Philip Seymour; or Pioneer Life in Richland County, was popular enough to find new editions reprinted every generation until 1908, and then again in 2000.

His story was based on actual occurrences surrounding the Battle of Copus Hill in 1812; augmented with literary excursions into romance, mystery, adventure and humor.

Authentically or not, some of his story takes place at Hemlock Falls, so a great deal of the legend and lore of the area that survives to this day actually originated in his imagination.

A number of ghost stories that continue to haunt the place, came from the mind of another writer in the 1890s: a newspaper journalist named A.E. Bell. He ran the Butler Enterprise for 17 years, and his semi-fictional, or sometimes wholly unbelievable, tales of local scenes were reprinted in newspapers all over the county, and are still often recounted as fact.

So if you hear about the skeleton hanging in a tree at Eagle’s Nest, or the Spanish treasure buried below the falls, you are enjoying a yarn from the columns of a whimsical 1890s newspaper reporter.

Hemlock Falls was the site of a gathering of historic proportions in 1856, when all the old pioneers of Richland County met there for a ceremonial recognition and get-together. The event was staged above the falls so that all the old folks could hear the speeches, because it is much quieter up there.

The Falls area was generously available to the public for most of a hundred years, and tourists to the locale gradually established names for various conspicuous rocky landmarks along the ridge, much as you find at Yosemite where every feature of the landscape has an old familiar designation.

Aside from Hemlock Falls there is Eagle’s Nest, Slanting Rock, and Weeping Rock. The most prominent of them is Threshing Floor, or Thresher’s Rock, where the stone surface at the top, high above the valley floor, was flat enough for use by early settlers, “as a floor upon which to tramp out wheat.” There is a story that one of the horses, used to tread out the grain, fell over the rocks; whereupon the owner of the beast remarked, jokingly, “Well, that hoss will never fall again.” (A.J. Baughman, 1903.)

The use of Hemlock Falls as a popular picnic retreat slowed considerably in the 1930s when the land changed hands, and in recent generations it was owned by Commodore Johnston, who was generally welcoming to people who were courteous enough to ask…not so much to those who didn’t.

Today the 85 acres adjacent to the Falls belong to the Richland County Park District, and public access is administered by the Mohican School in the Out-of-Doors.

Fortunately for us, and for endless generations of Richland County folks to come, Hemlock Falls is under a conservation easement, by North Central Ohio Land Conservancy, that ensures our priceless jewel will always remain undeveloped in its natural state.

Never been to Hemlock Falls?  Take a minute or two to enjoy the sounds of water cascading in the rocky hollow, and the afternoon light filtering through the trees.