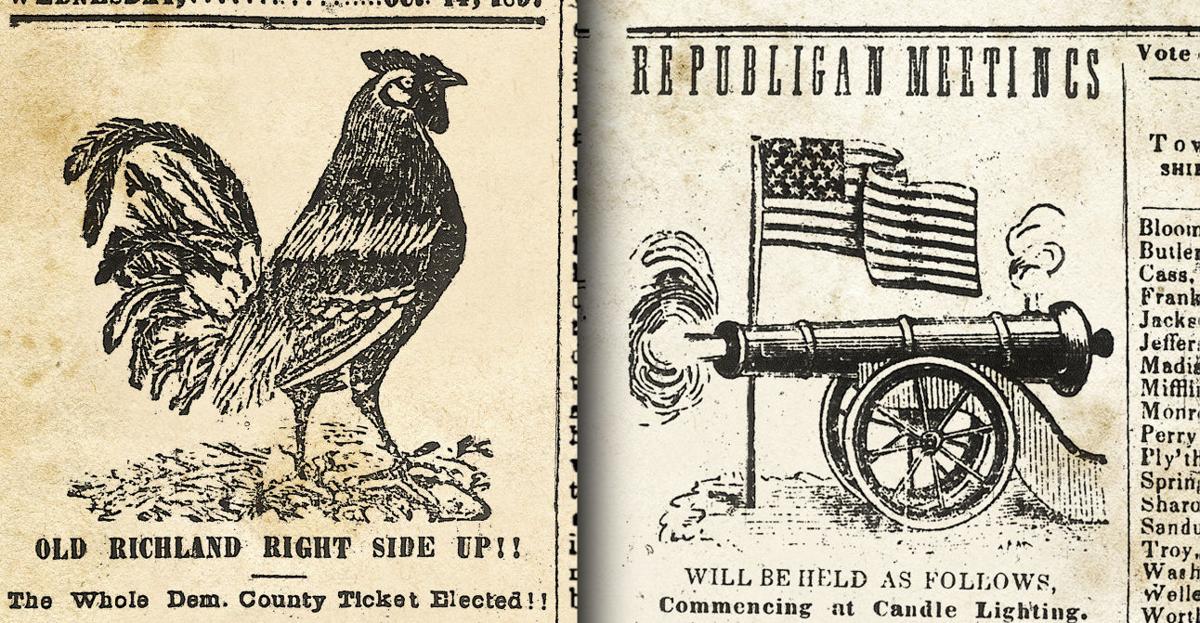 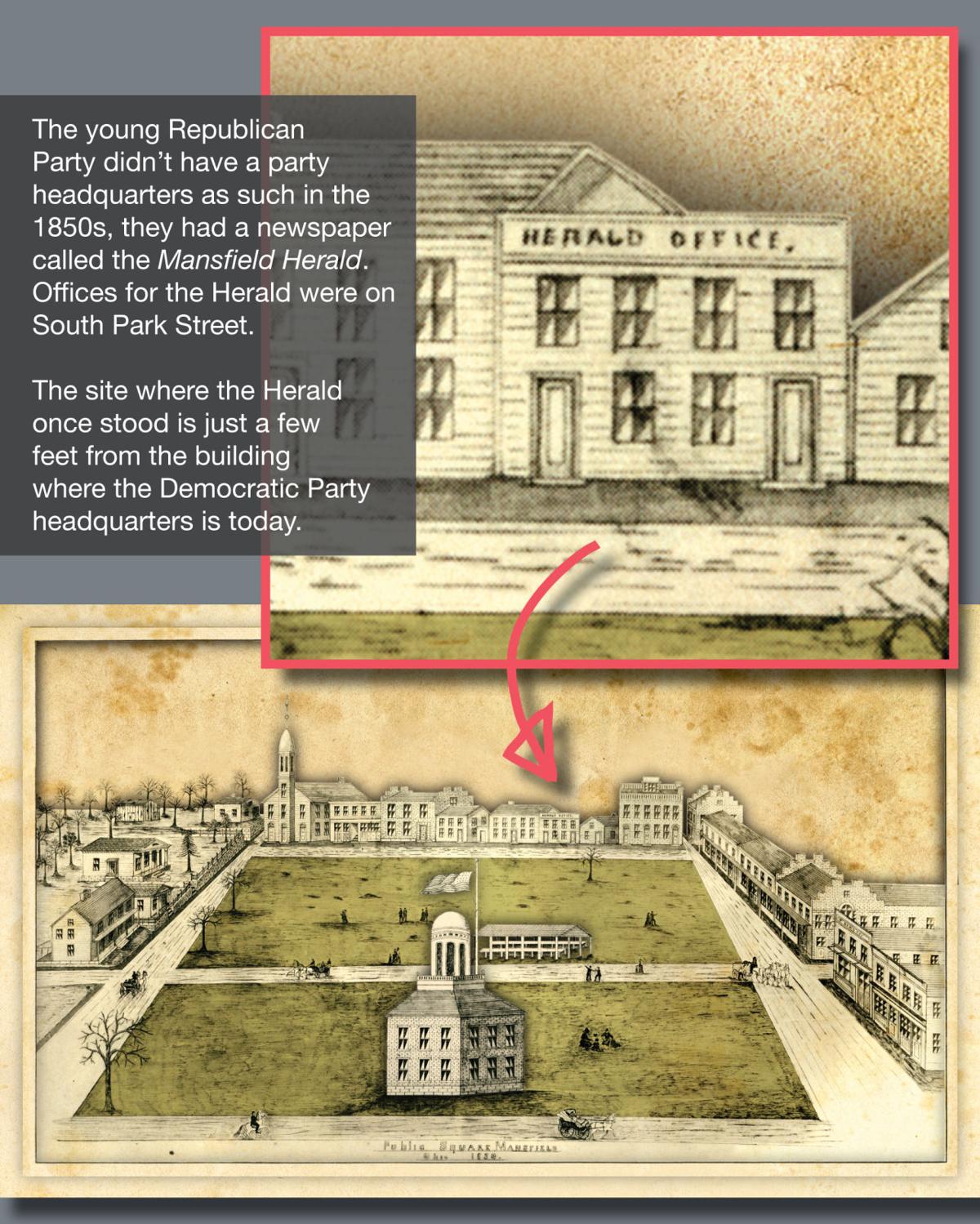 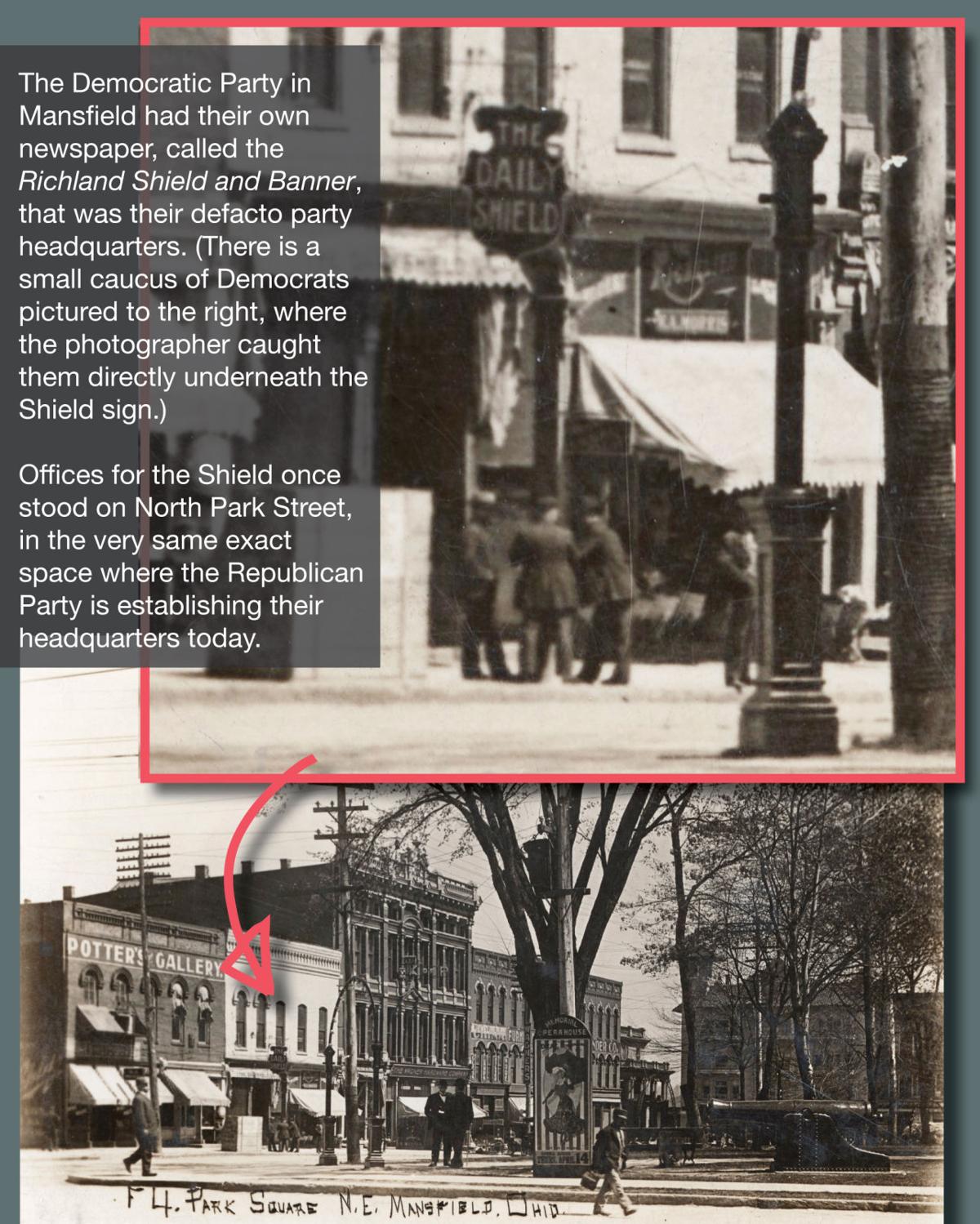 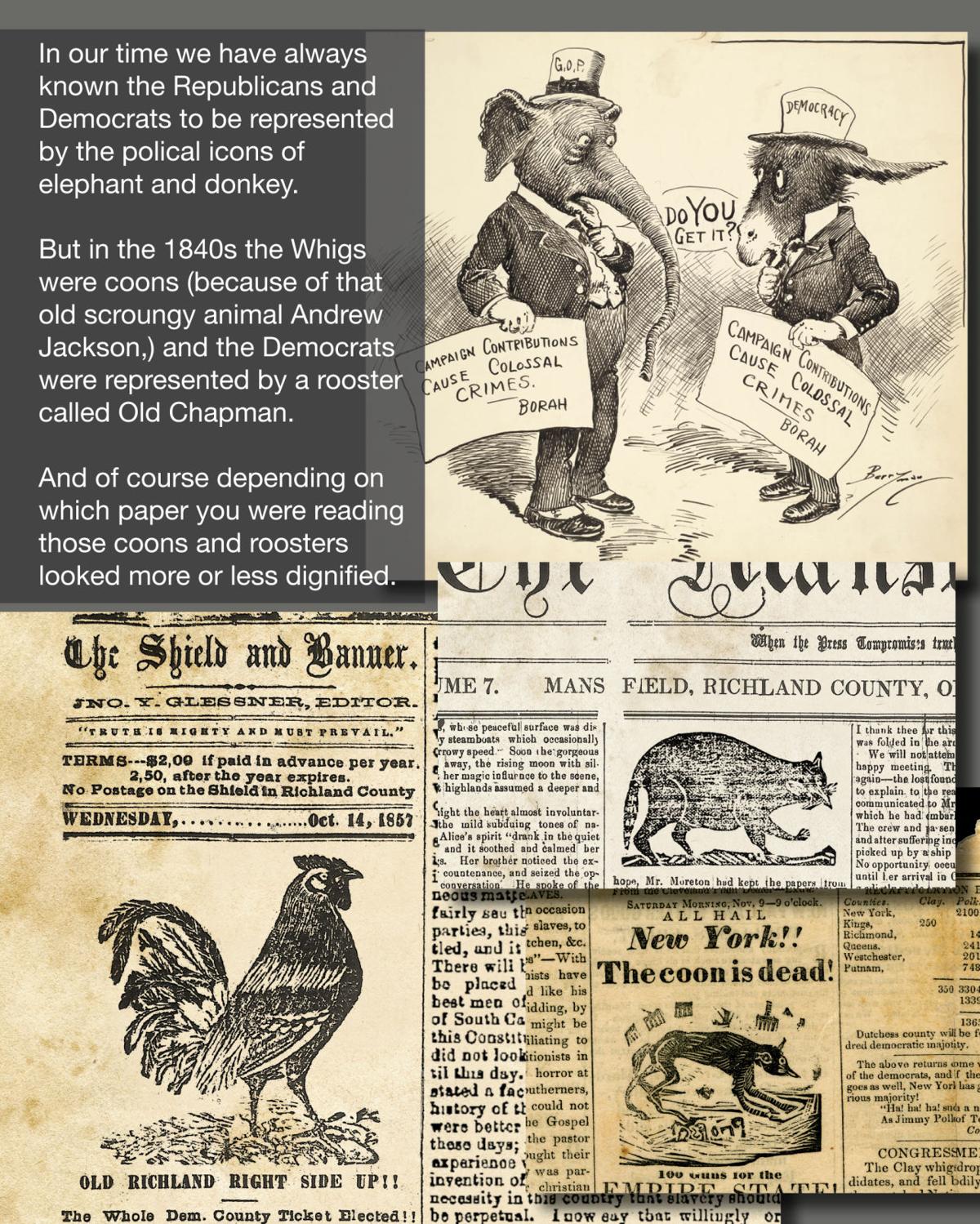 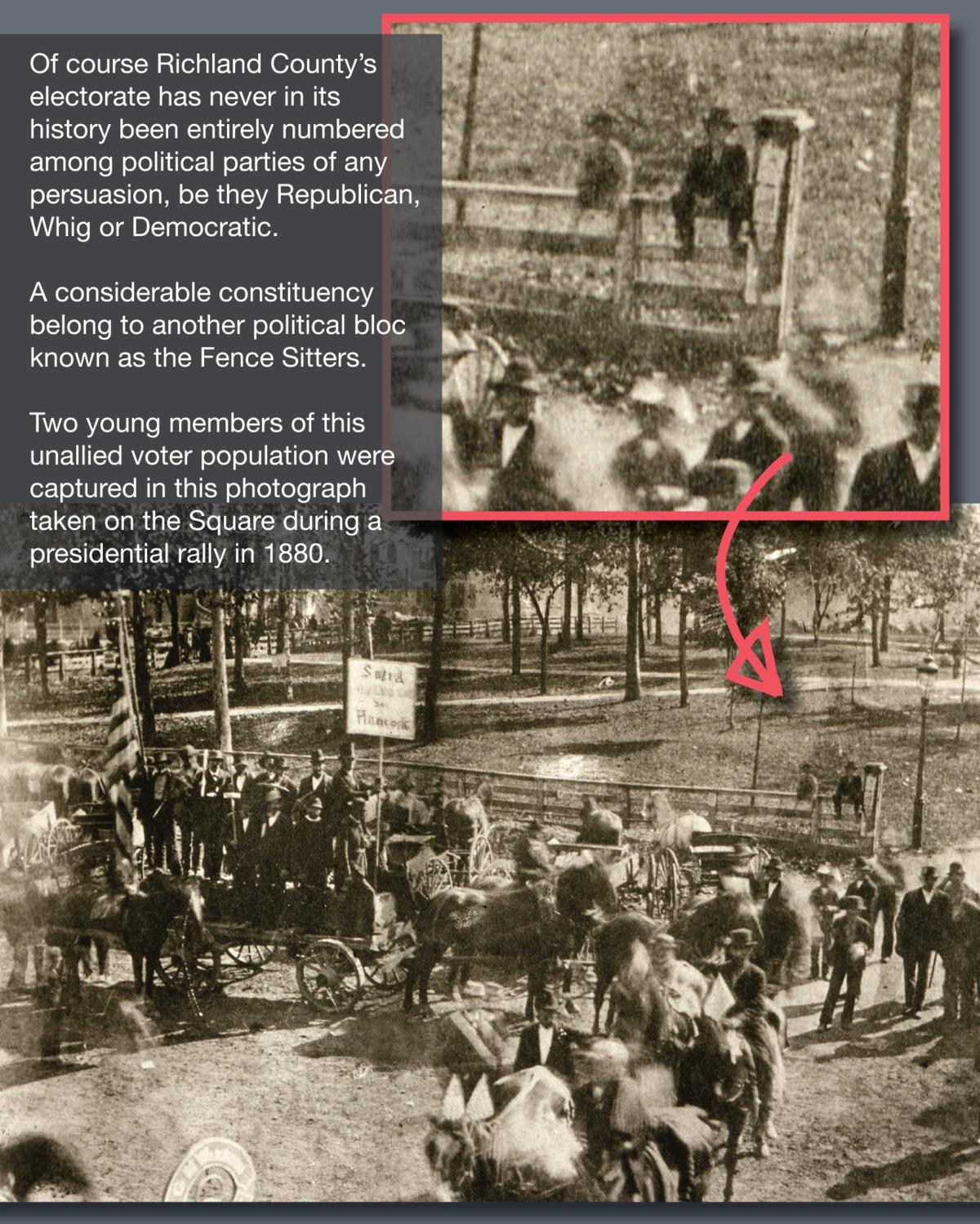 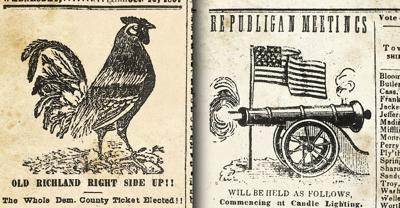 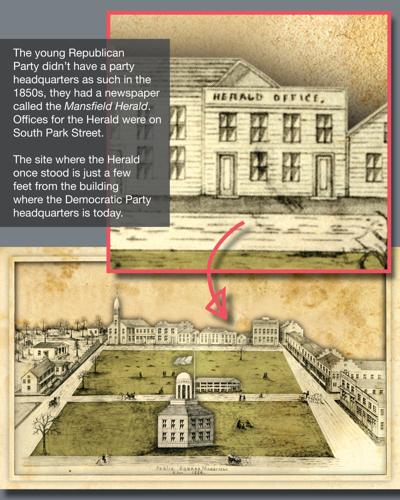 Editor's Note: This story was originally published on Richland Source in 2014.

In this ‘new’ arrangement, the Square in between these opposing forces becomes no-man’s land in the field of battle with the line of scrimmage on Park Avenue.

While some people in Richland County have jokingly made reference to a 21st century civil war—North versus South—what is happening today is actually only a very uncanny reversion to the 19th century on the Square, when the two opposing political parties of Richland County faced off from almost the identical sites.

The longer you study history—be it World, American or Local—the more you recognize patterns in the story: the way that history repeats. It never comes back exactly the same, there are always interesting subtle or not-so-subtle variations in the way the story is told the next time around.

What’s really interesting is when everyone involved in the unfolding present is acting their role pragmatically, unsentimentally, and doing so in earnest without any awareness of the past that is being re-created through their efforts.

The only way to really see the recycling of our story is to step way back and take a look at the long view. In this case the panoramic scope of the view is more than 150 years.

The First Time Around

In the 1800s there were no ‘party headquarters’ in Mansfield, the home base and focal ground zero of each political wing was located at the offices of the newspaper that represented their party. For the greatest part of Mansfield’s history there were always at least two newspapers in town, the most prominent pair of them duking it out in the public newsprint forum representing the two principle national parties.

In the 1850s when the weary old Whig Party died away and the new Republican Party rose in its place, a new newspaper was established for the purpose of pronouncing, enunciating, and promoting their political point of view and agenda. This was the Mansfield Herald. They established their editorial and printing offices on South Park Street, not far from Main.

The Democratic Party, at that same time in history before the Civil War, was represented in town by their own newspaper: the Richland Shield and Banner.  For many years the Democratically-inspired Shield & Banner had their offices on North Park Street—almost directly across the Square from their Republican enemies.

In time, the field of battle for Richland County politics shifted away from the Square, and hostilities resumed on Fourth Street for a few generations. The Herald evolved into the News, and ultimately the Shield was reborn as the Journal. After a pitched battle that ended with an actual bomb blowing up in a publisher’s house, the two merged into the News-Journal.

Some time in the 1990s when the Richland County Democratic Party decided to locate on the Square, they acquired the old Goetz Hardware building on South Park Street. This location is only a few steps down the sidewalk from the site where the Mansfield Herald had its office in the 1850s.

In the 2010s when the Richland County Republican Party elected to move onto the Square, the building they chose is the exact same space once occupied by the Shield & Banner.

So the Dems got the old 1800s Republican stronghold, and the GOP took possession of the former bastion of the 1800s Democrats.

That’s really intriguing, but here’s what’s truly fascinating: in the 1850s when the Republicans were on South Park Street their party was, without a doubt, the liberal wing of American politics—as is the Democratic Party today. The Democratic Shield & Banner at that same time represented the conservative voice in America—the same as the Republicans do today.

So there you have it: we have come full circle on the Square.  Everybody is back where they belong. The names have been changed to protect the innocent, but other than that it is—once again—business as usual.