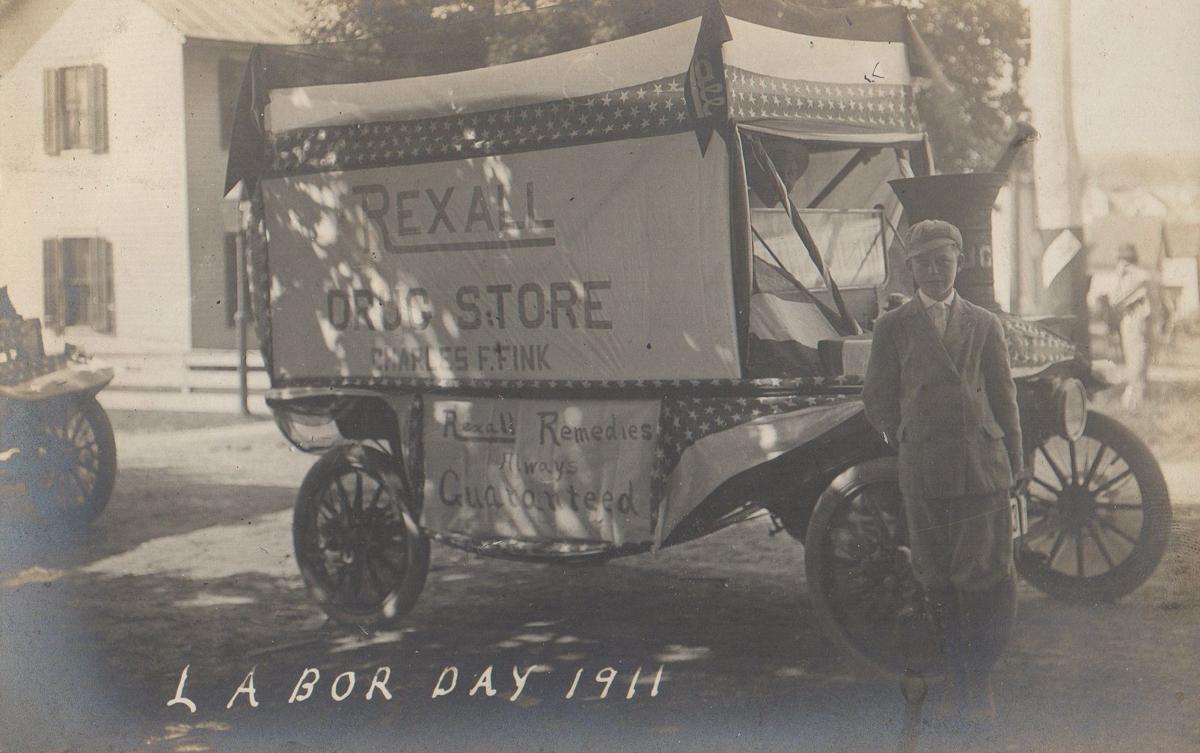 This vintage postcard image shows what may well be Charles F. Fink's pharmacy deliver truck, decorated for Labor Day, 1911. Fink's Rexall Drug Store had been under his direction since 1904, though the store itself dated back to the 1860s. 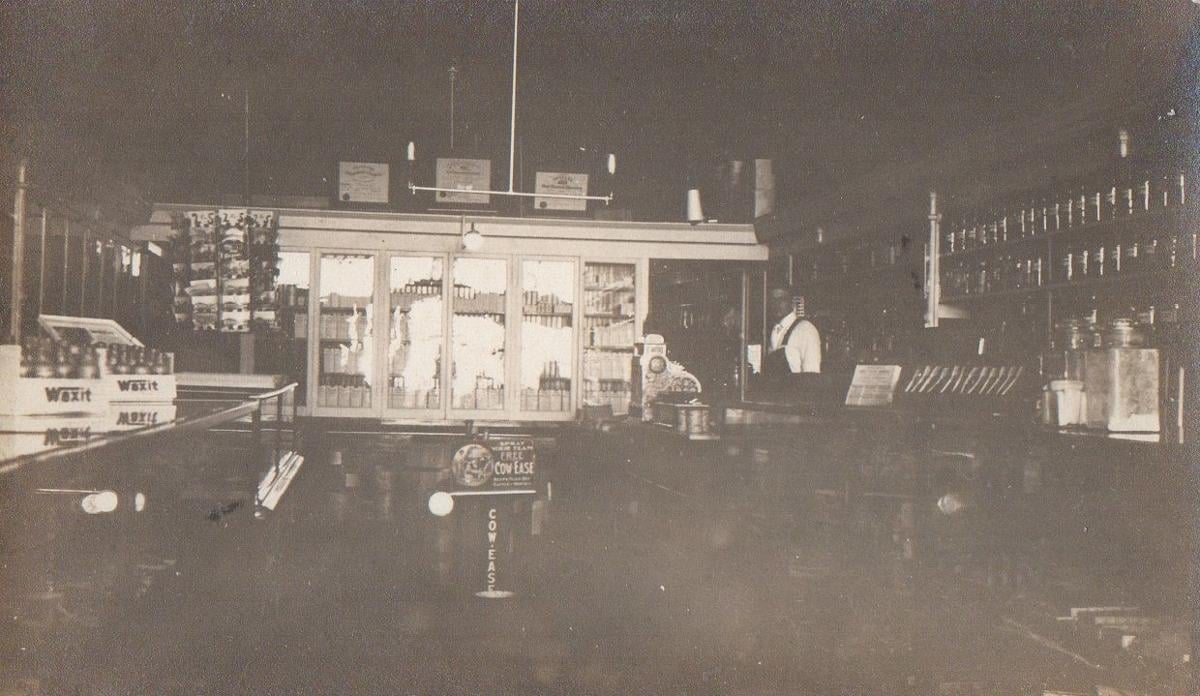 This photograph of the interior of Fink's store also dates from 1911. That is presumeably Charles Fink himself, standing at the counter. The photo was tucked in as a bonus when the author purchased the vintage postcard at a show in Cleveland in 2019. 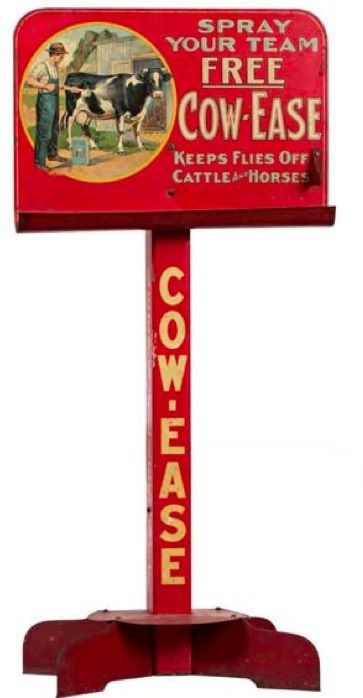 The stand in the middle of Fink's store was a tin lithograph advertisement sign for “Cow Ease,” a popular pest repellent for keeping flies off cows. A mint condition version of this same sign was sold in 2012 by Wm Morford Antiques (Morfauction.com) for a mere $1,870.

Ask any old timer about life in Fredericktown and Fink's drugstore will surface sooner or later. The store, located at 115 North Main Street, was a local fixture for many years, run by Charles F. Fink and later by his son, Norman.

Charles was born in Olivesburg, Pennsylvania in 1877. He attended Ohio Northern University and graduated with a degree in pharmacology in 1898. He first came to Fredericktown to work at F. F. Hosack's drugstore. After just a few years, Hosack decided to retire and sold the store to his vigorous young employee.

Fink ran with it, making it a center of town life. Even in that age, drugstores were much more than just pharmacies, offering a wide range of products.

A 1920 newspaper ad for the store says “The store is well arranged and filled to repletion with an excellent line of chemically pure, fresh drugs, patent and proprietary medicines, toilet and fancy articles, rubber and leather goods, books and stationery, kodaks and supplies, 'White & Black' cigars and tobacco, smokers' articles, and full and complete line of the famous Rexall Family Remedies for all the ills heir to the human family and a specialty is made of the prescription case.” Interesting to see how at this time the brand name “Kodak” was used in place of the word “camera.”

The ad also proudly states, “The Rexall Store of Fredericktown is ably presided over by Mr. Chas. F. Fink, the druggist, who stands preeminently, at the head of the drug trade of this district.”

He had opened his store shortly after marrying Estella Ebersole, a Fredericktown native. They would have only two children, Wendell, born in 1910, and Norman, born in 1920.

Fink gave an interview to Barbara Amos in the Mansfield News Journal in 1967 — yes, that date is correct — when Fink was still working as pharmacist at age 90, though he had turned over the running of the store to his son Norman. He said that the business was the first, and for many years, the only place in Fredericktown to have a telephone.

It was also the first building wired for electricity — done by the electric company to show off the superiority of electricty to gas lighting. Fink estimated that including his predecessors, the store had been in operation for over a century.

“Years ago farmers would come in to town,” Fink said, “and hang around the hitching rails in front of the store. They'd complain if I started to turn out the kerosene lamps too early, so I'd stay open sometimes until long after midnight.”

In 1914, Fink experienced quite a surprise when he went to open his store one February morning and found Mabel Chapin standing at the door, wearing only a nightgown and slippers, surprising attire on a morning when a snowstorm was in progress and temperatures were hovering around zero.

What's more, Fink knew that although Mabel normally lived in Fredericktown, she was in the midst of divorce proceedings with her husband and had been staying in Mount Vernon.

When he opened the door and asked Mabel if he could help her, he realized she was completely asleep. Mabel Chapin suffered periodically from sleepwalking, and on this occasion had made an astonishing seven-mile trek from Mount Vernon to Fredericktown, in a blizzard, apparently instinctively heading to a familiar place where she always felt welcome.

Fink awoke the frostbitten woman and rushed her to his home on Sundusky Street to warm her and treat her frostbite. She suffered no permanent damage, and the shock of the troubled and dangerous expedition actually ended up bringing Mabel and her husband, Rev. Harley Chapin, back together.

Fink's became the first store in Fredericktown to boast a soda fountain in 1927. It had a red marble fountain with two wedge-shaped chairs, in the southwest corner of the store.

“Charles Fink used to let the kids sit on the window sill and read funny books,” said Karen Sherman, commenting in the Knox Time forum on Facebook. “He was very nice. He'd make me soda in a very pretty glass.”

Forum organizer Jim Linkous also remembers fondly the apple machine that used to sit at the bottom of the stairs.

In the 1967 article, Fink said that he still had his mortar and pestle, and his marble slab for rolling pills, relics of the days when pills would be mixed and manufactured on site by the pharmacist. One wonders if those souvenirs are still floating around out there somewhere?

Fink had a remarkable run, and he was heavily involved in civic projects, including serving for 36 years — voluntarily, without pay — as secretary of the Forest Cemetery Association. He was 95 when he finally left this world in 1973.