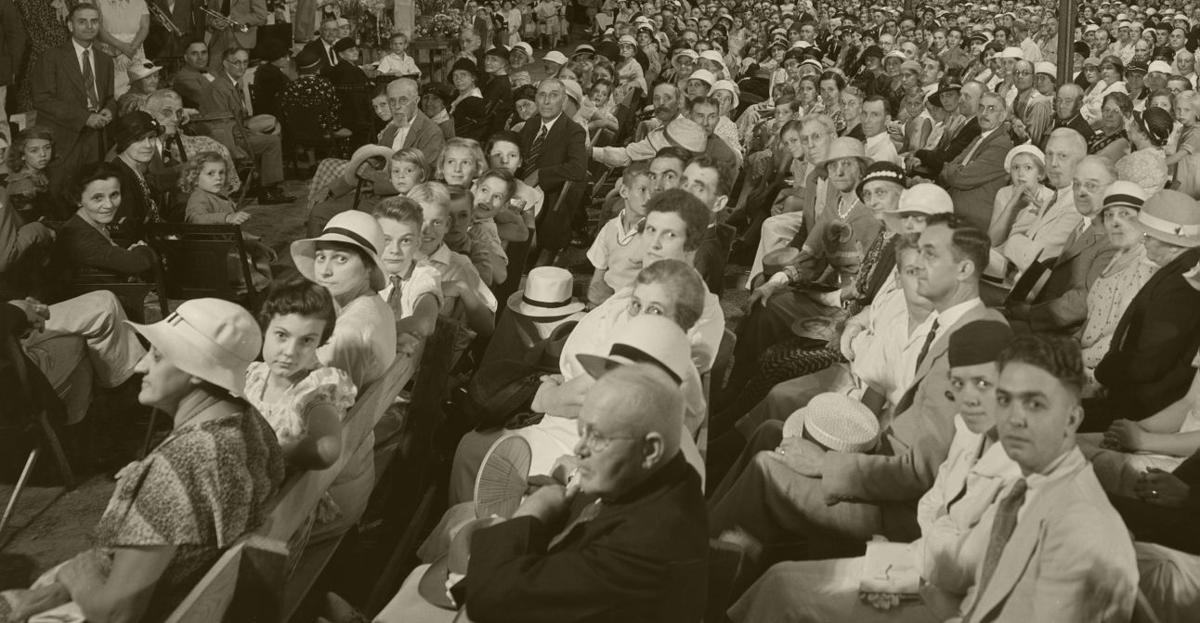 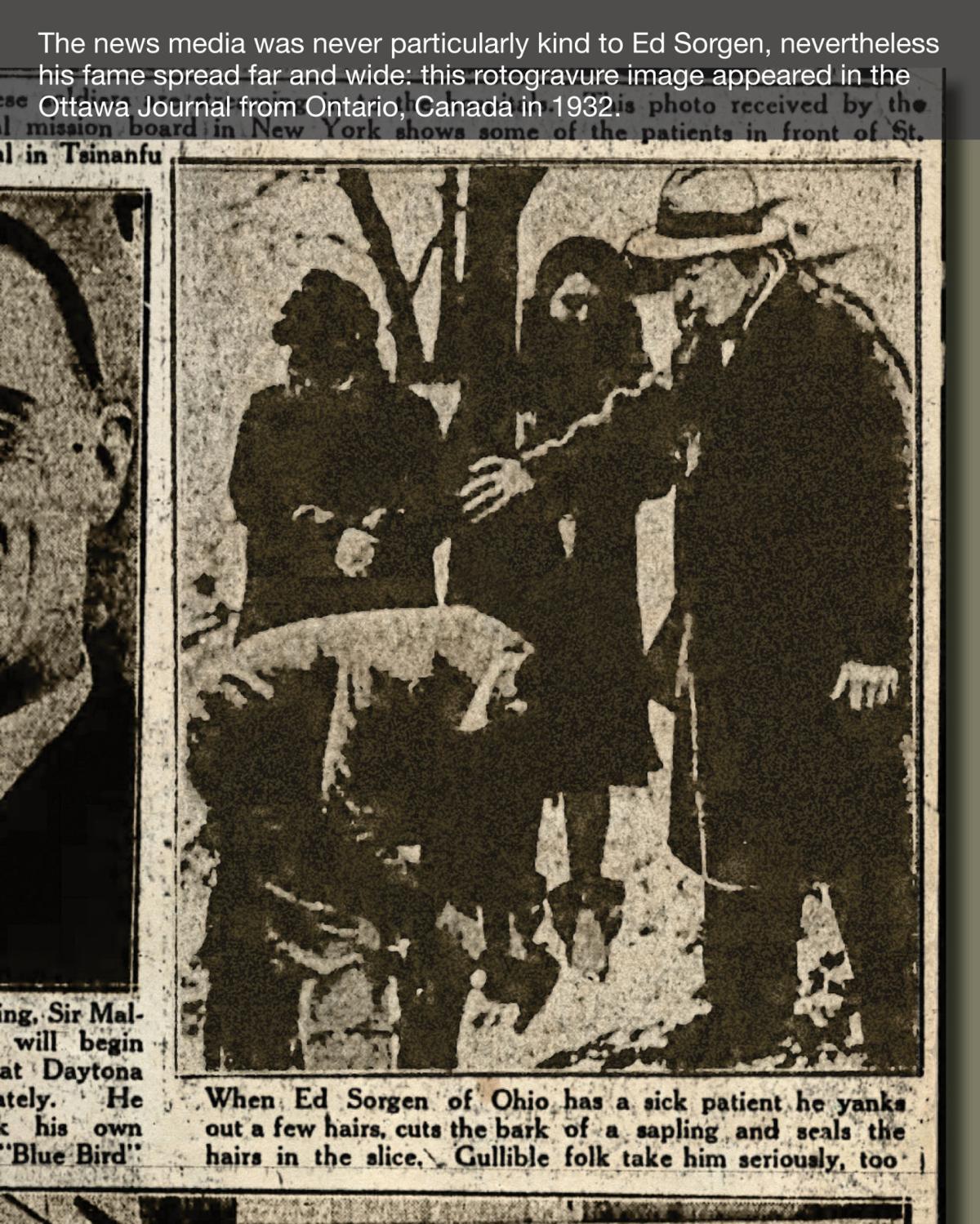 News media generally mocked the work of Ed Sorgen even though his followers numbered in the many thousands. 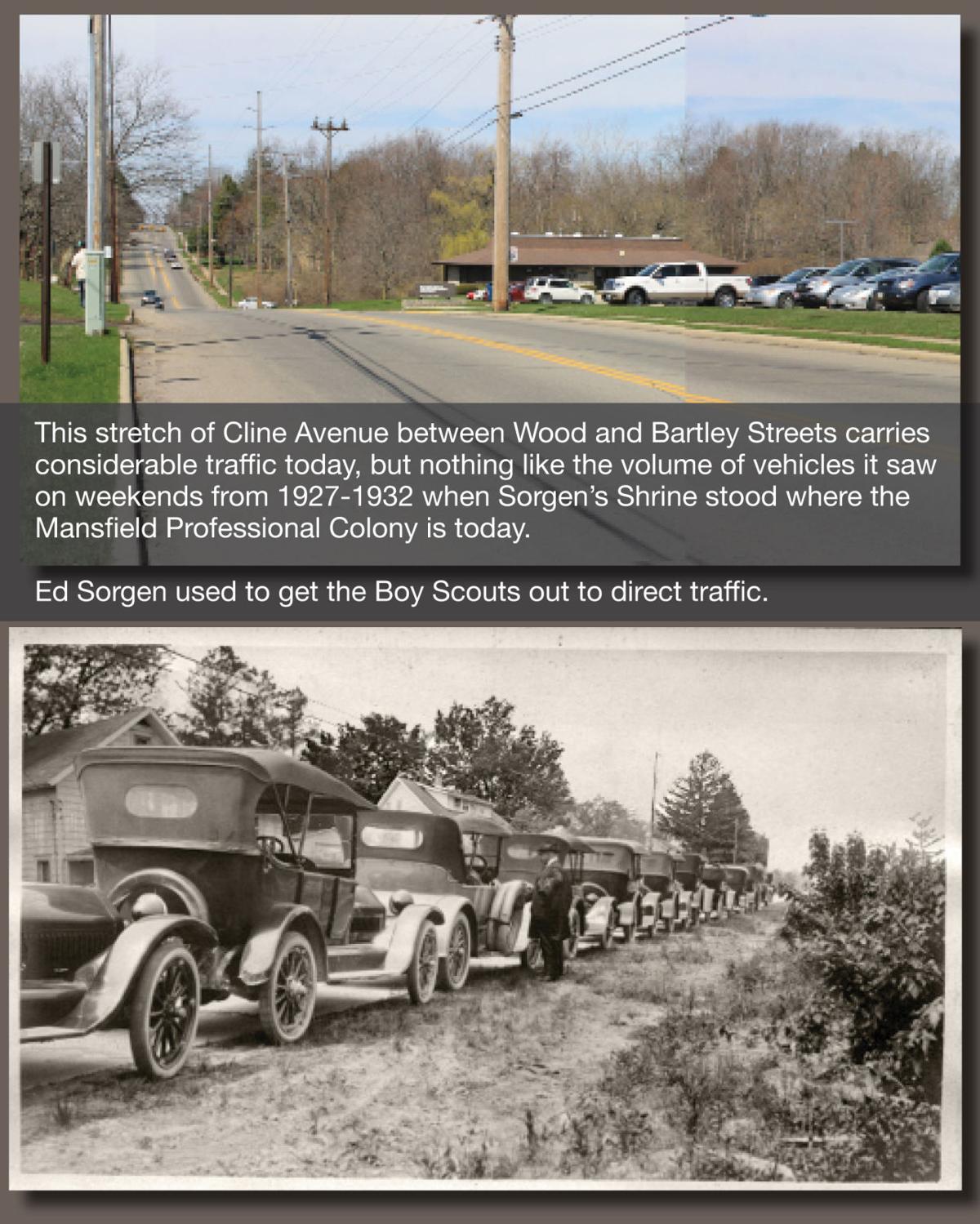 The site of Sorgen's Shrine in the 1920s is today a complex of medical professionals. 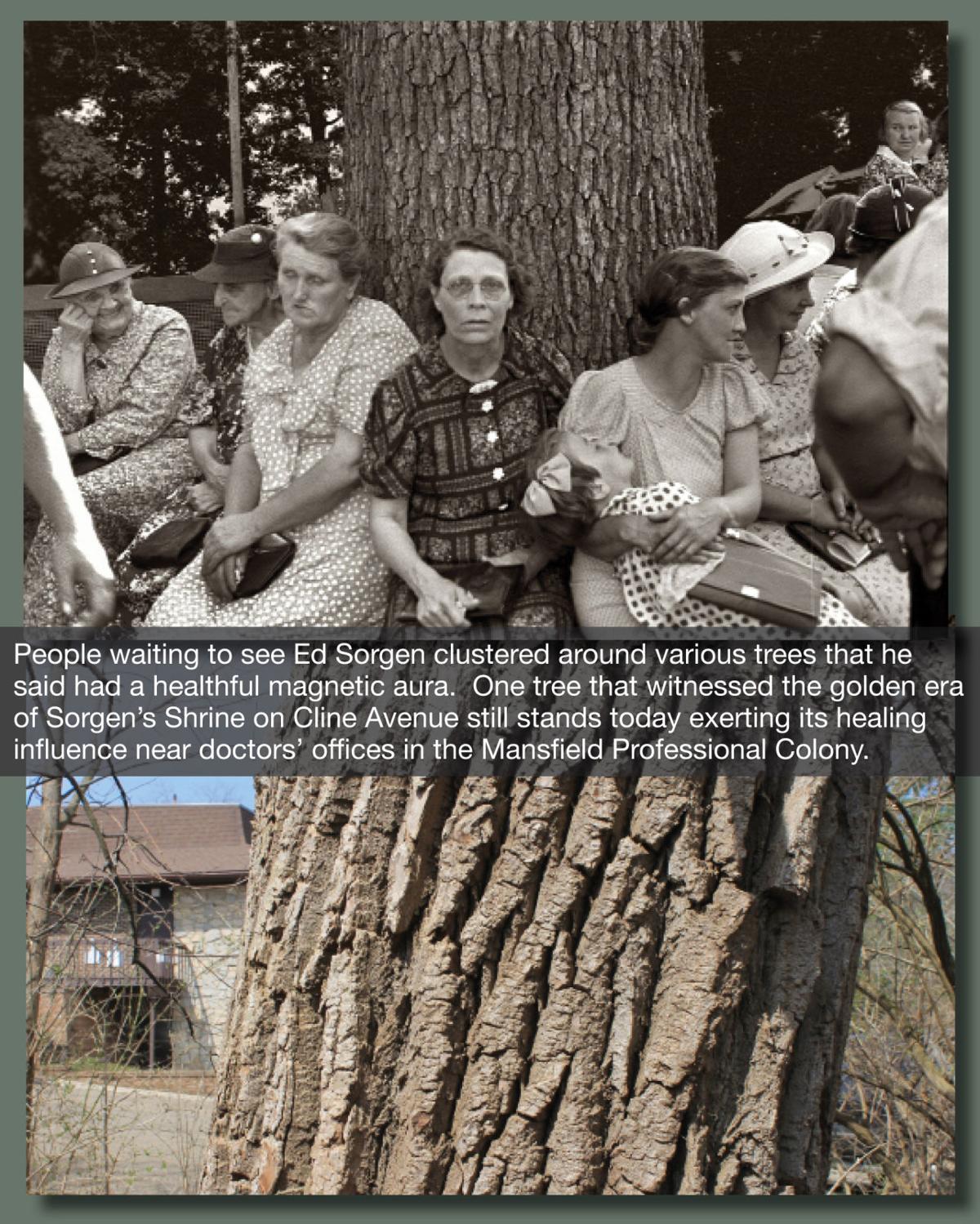 Ed Sorgen preferred to administer his healing treatments in the presence of trees. 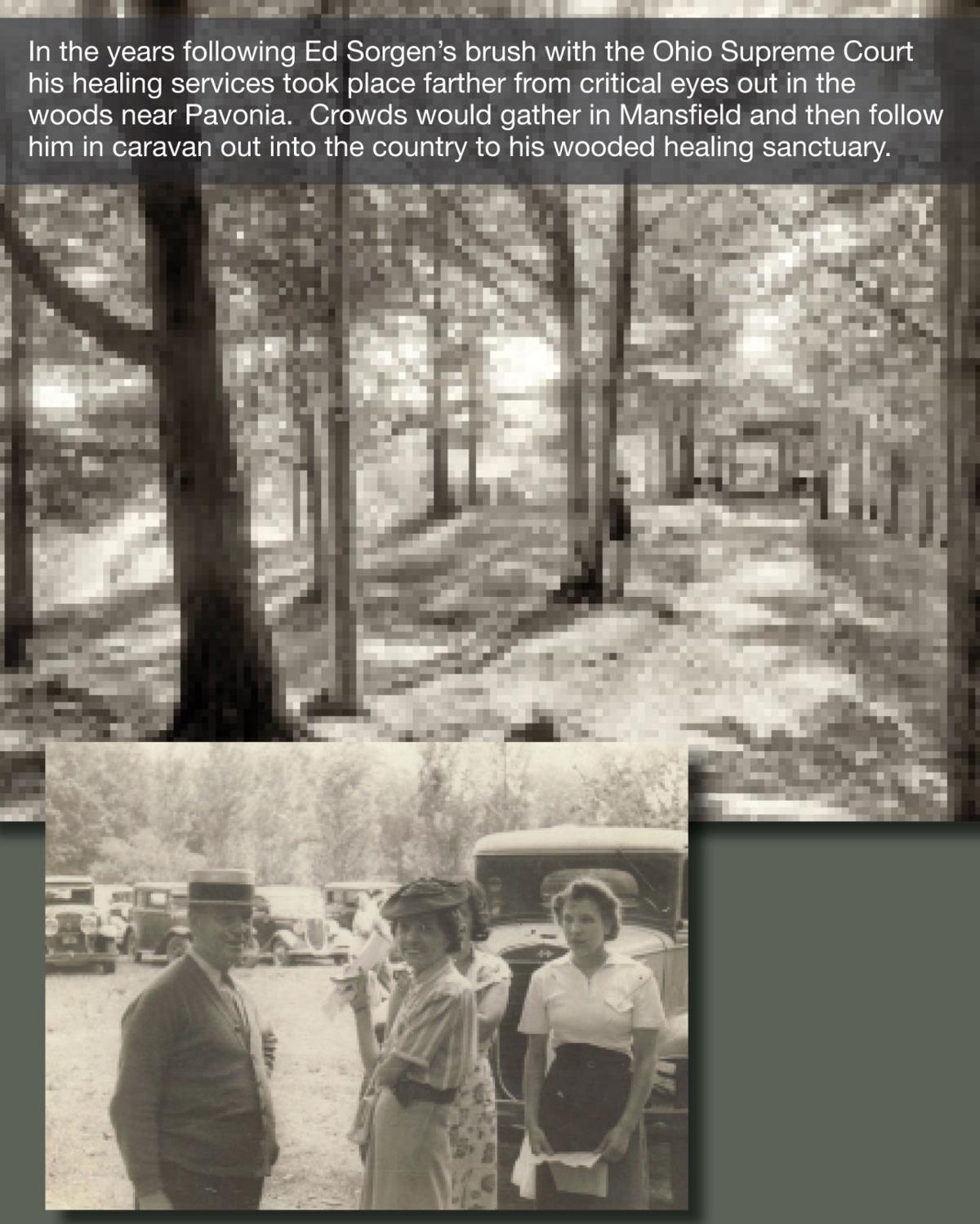 Crowds followed Ed Sorgen out of Mansfield in long caravans to assemble at a special grove designated for healing events. 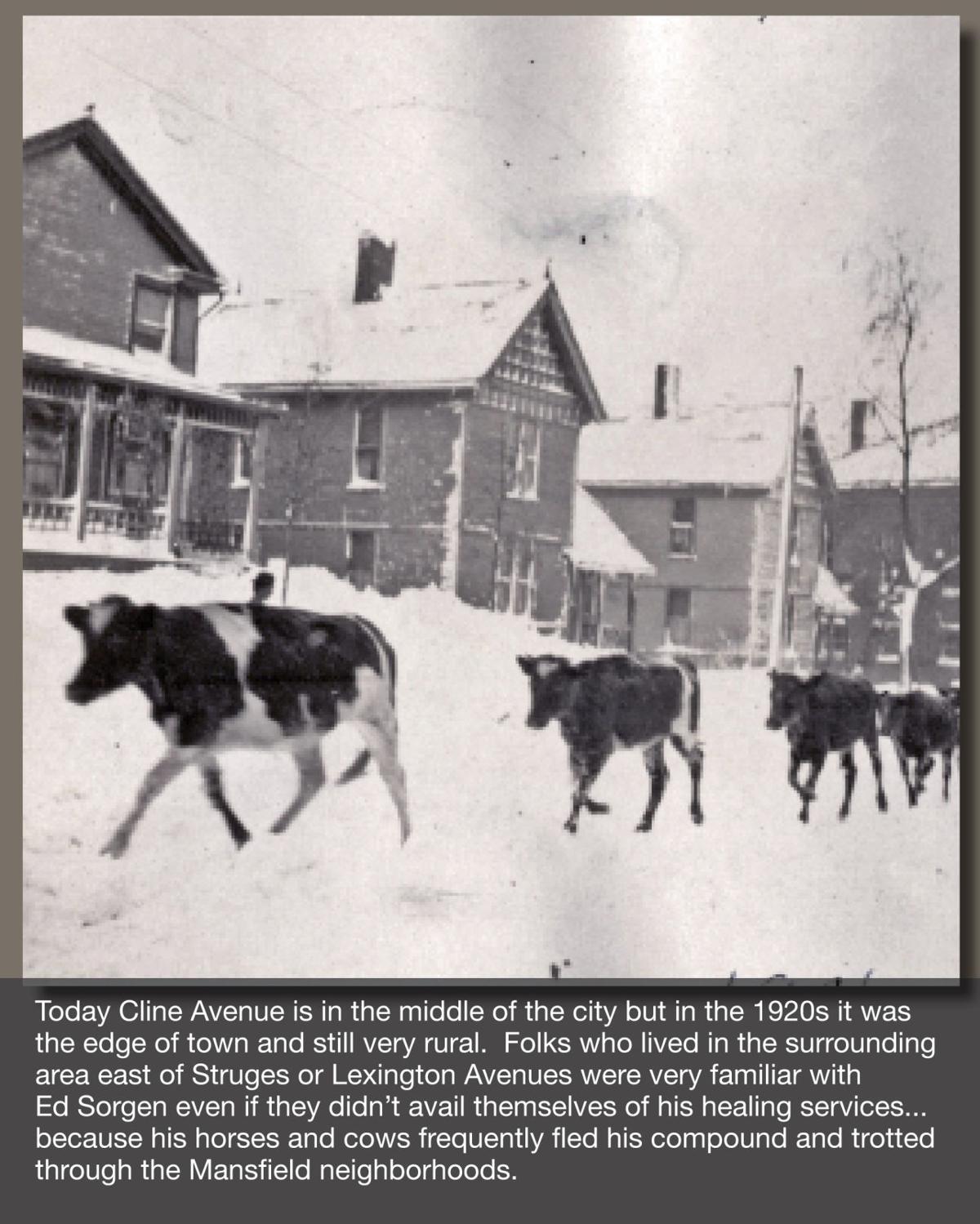 Ed Sorgen's land on Cline Avenue had two barns, cows and horses.  Nearby neighborhoods periodically herded his escaped livestock back to his home. 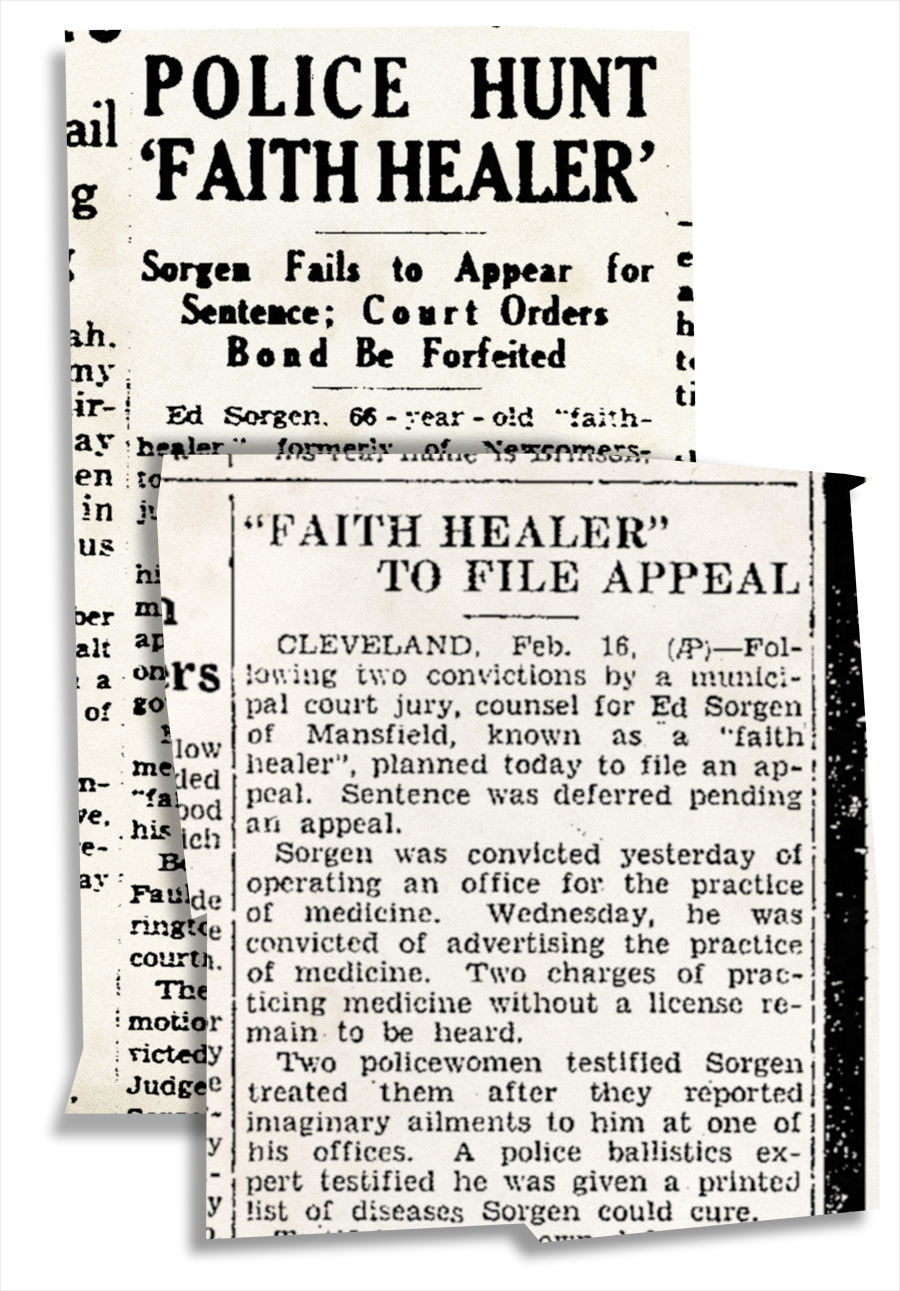 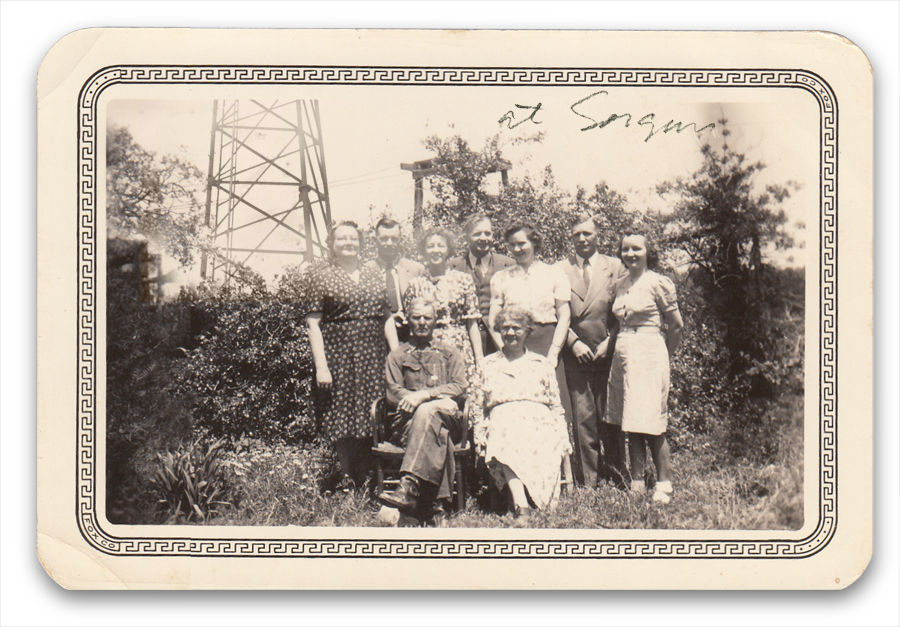 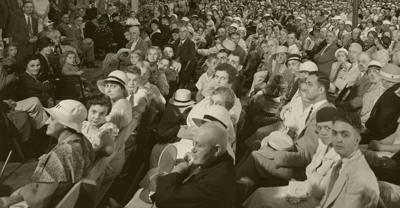 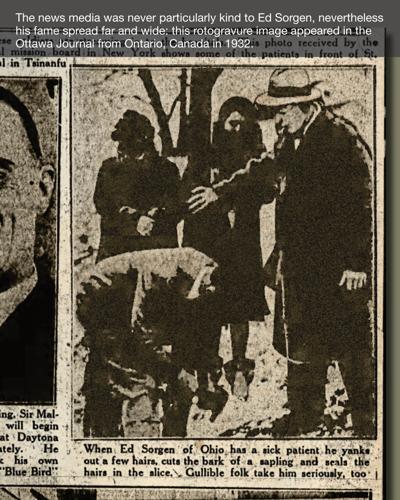 News media generally mocked the work of Ed Sorgen even though his followers numbered in the many thousands.

The site of Sorgen's Shrine in the 1920s is today a complex of medical professionals.

Ed Sorgen preferred to administer his healing treatments in the presence of trees.

Crowds followed Ed Sorgen out of Mansfield in long caravans to assemble at a special grove designated for healing events.

Ed Sorgen's land on Cline Avenue had two barns, cows and horses.  Nearby neighborhoods periodically herded his escaped livestock back to his home.

In 1930 Mansfield was a Mecca for suffering people from all over the Midwest who came here by the thousands to be made well by a man whose fame spread far and wide for his powers of ‘magnetic healing.’

Crowds would pour into town on weekends, and cars jammed Cline Avenue — parked alongside the roadside for more than three quarters of a mile from Sturges to Gadfield — so afflicted souls could have a few minutes with the man whose fantastic curative abilities were documented by thousands of testimonials.

The most fascinating aspect of this story today is that in our time the very site of this 1930s ‘shrine’ is covered by a complex of offices filled with doctors, physicians, and health professionals.

The cars that fill the parking lots of the Mansfield Professional Colony sit on the very site of the huge waiting room, where once folks patiently awaited their chance to get well.

The Tower of Power

Of course there is never any shortage of skeptics, and locally the landmark towering metal construction was informally referred to as the “Tower of Babble.” Just so there could be no confusion about what it was there for, however, the tower was made with marquis light bulb letters at the top — 75 feet in the air — spelling the name of Mansfield’s healer: SORGEN.

Ed Sorgen had the three-legged tower built in 1932 as a magnetic vortex to draw down the electric powers of the cosmos. The day he plugged it in for the first time there was a crowd of 600 believers on hand to sanctify the dedication. They said at night his name could be seen from the top of Ashland hill.

Power of the Law

Ed Sorgen (1867-1950) came by his powers honestly — he inherited them from his mother. She came to America from Switzerland where she had attracted much the same kind of following that her son experienced in Mansfield. He hinted that she left the old country in order to escape the attention, because not all of it was good.

Ed had a similar negatively-charged response once his Sorgen Center on Cline Avenue began attracting floods of people … he was arrested more than once. His first trial took place in Mansfield in 1932, when he was charged by the State Medical Board with “practicing magnetic healing without a license.”

On the day the trial opened at the Richland County courthouse there were hundreds of people standing in the hallways and overflowing out into the front yard. They all came to testify on Sorgen’s behalf.

His attorney came into the courtroom wheeling a steel filing cabinet that he plunked down next to the defense table. It was crammed full with thousands of letters and telegrams sent in by Sorgen’s sea of supporters as testimonials attesting to the legitimacy of his restorative capabilities.

His attorney referred to the file cabinet as his ‘silent witness.’ The Mansfield judge dismissed the case.

Undeterred, the Medical Board decided the hometown advantage was unfairly prejudicial to their cause, so they had him arrested again two years later in Cleveland. Sorgen’s defense was simple: he did not represent himself as a physician, he charged no fee, and any monies that changed hands were voluntary contributions.

The case went all the way to the Ohio Supreme Court, who ruled against Sorgen. There was no sentence particularly imposed, and his work went on for many more years in a manner much more quiet and surreptitious.

Even though newspaper editors and doctors didn’t take him very seriously, Ed Sorgen was definitely loved and respected by many, many people. Even years after he died there were still letters coming in from all over the country sent by people seeking appointments with Doc Sorgen.

Though he was described in the headlines as a “Faith Healer” (almost always with quotation marks), the term was used in a slightly different context than is generally accepted today, 90 years later. There was plenty laying on of the hands, but not so much Christian dogma.

When testifying in his own defense Sorgen said, “my work is between human beings and powers above. I do not know what it is. I do not practice medicine.”

Some of his curative practices were plainly folk remedies, occasionally verging on voodoo. He was known to cut hairs from his patient’s head and place them inside the bark of a tree. When the tree healed its bark, he said, the patient would be healed of the malady.

Other of his cures — that may have been considered mystical at the time, or perhaps fringe science — are more generally accepted today. One example comes from a woman whose testimony claimed “He told me to take off my shoes and he jammed his fist into the bottom of my foot. It hurt tremendously at the time but later on my liver complaints vanished.”

To anyone who is familiar with the practice of Reflexology this treatment is common today.

Of his honest generosity of spirit there could be no doubt, as many of the poor who came to him found baskets of food on their doorsteps in the following days. Ed was independently wealthy and sometimes hired busses to pick up the anonymous needy in Cleveland.

Within the boundaries of the Sorgen Compound on Cline Avenue he had various old trees, with which he was particularly bonded. That, he said, is what gave him strength and transmitted healing energy. He preferred to conduct healings in the presence of trees, and often led caravans of crowded cars on a pilgrimage to a special grove seven miles away, northeast of town.

The folks nearby in Pavonia could hear the enthusiastic multitudes singing from far off.

He was certainly not limited by the presence of trees, however, nor even by such a simple presumption as proximity, because he claimed he could conduct a healing over the phone, even long distance.

It is interesting that the Cline Avenue site where Ed Sorgen conducted his healing work is today a center of the medical community. When he was there in the 20s and 30s, Cline Avenue was a country road on the outskirts of Mansfield — considered south of town.

He built two structures near the road for the comfort of folks who traveled to Mansfield from far off: a restaurant and a huge waiting room.

Folks came from 30 states, Mexico, England and Germany; they came in cars, busses, limos and bicycles; they arrived on stretchers and they came in great multitudes, drawn like a magnet, because they heard they could find healing in Mansfield.

It is curious that in our world today Mansfield has evolved such a dynamic and broad-reaching medical presence — employing more people than any other local business or industry — because in 1930 the name of Mansfield was associated in many people’s minds with healing.

Perhaps it has something to do with all the magnetic energy Sorgen anchored into the Mansfield earth.