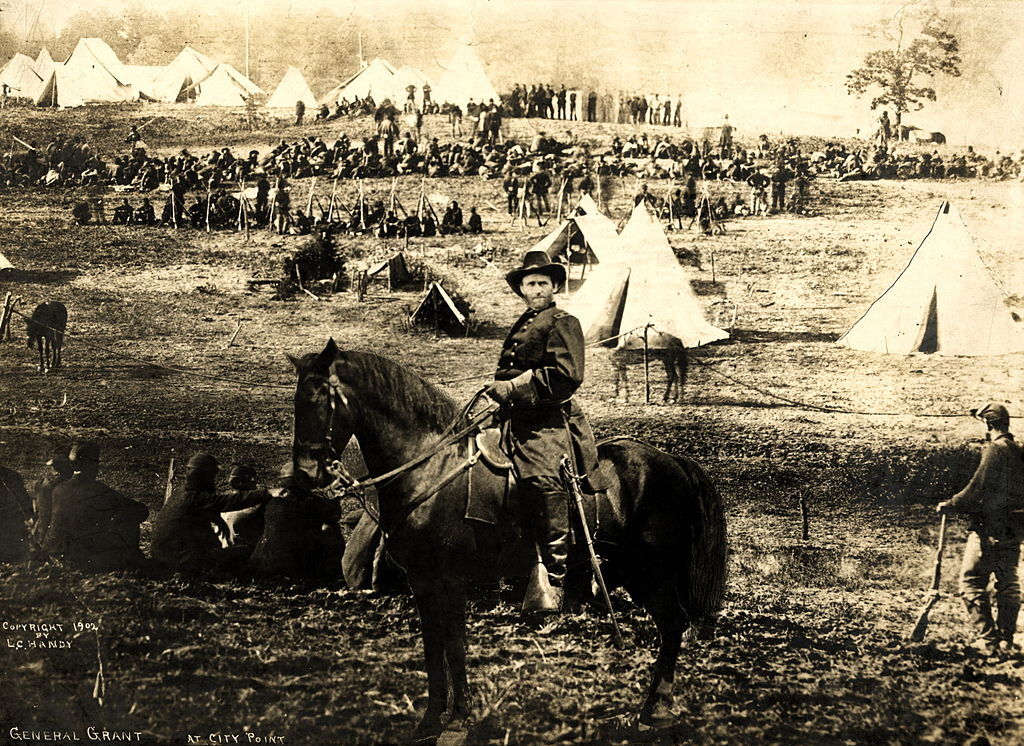 This famous photograph of Ohio native General Ulysses S. Grant is actually a montage or composite of several images. It was purported to show Grant at City Point, Virginia in 1864. Instead, the head was lopped off an informal portrait of Grant; the rider’s body belongs to Union Army General Alexander McDowell McCook; and the background shows an internment camp for Confederate soldiers. 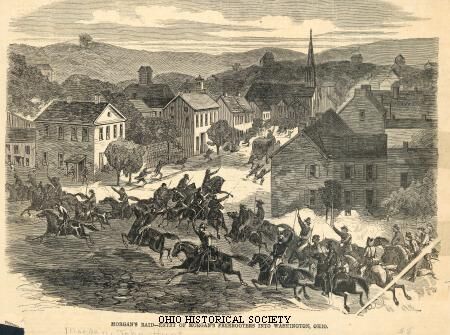 The 2,100 Confederate forces of Brigadier General John Hunt Morgan, better known as Morgan's Raiders, raced across southern Ohio for two weeks before being captured in July, 1863. 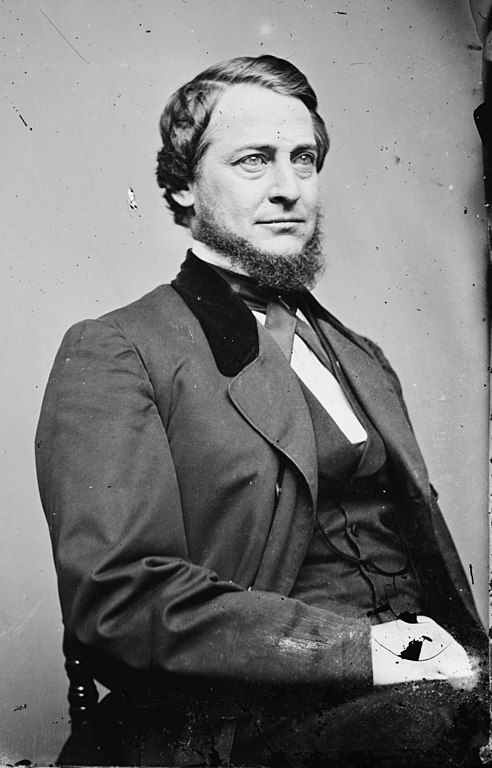 Matthew Brady's photograph of Clement Vallandigham, taken in Washington, D.C., while Vallandigham was a U.S. representitive from Ohio. 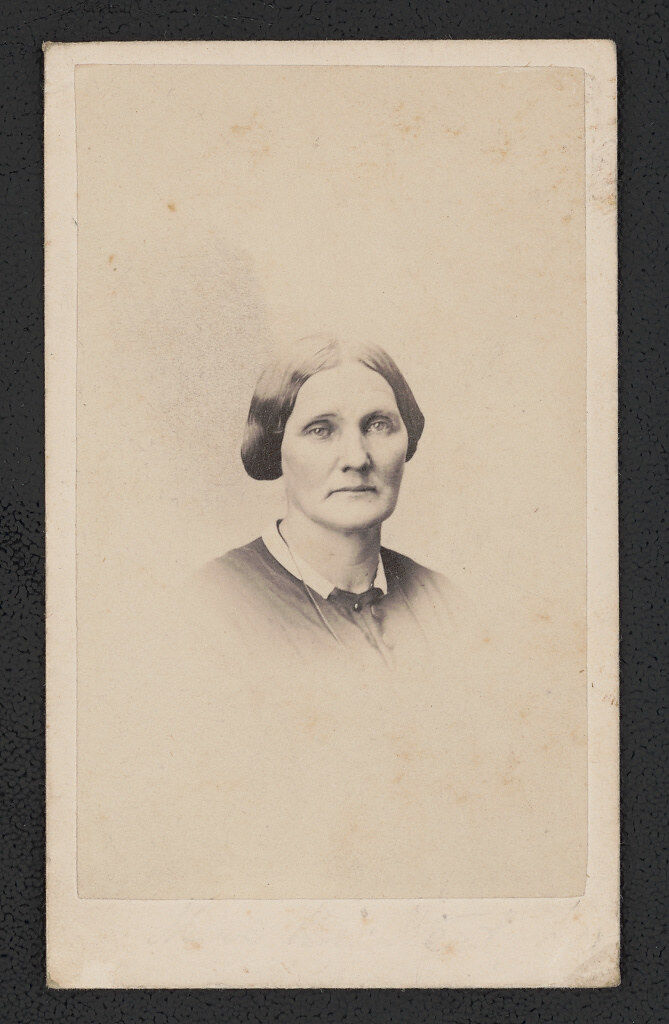 The Civil War began in April 1861 when Confederate troops under the command of Brigadier General P.G.T. Beauregard fired on Fort Sumter, a Union fort in the harbor of Charleston, South Carolina, commanded by Major Robert Anderson.

There were no casualties during the bombardment and Anderson surrendered the fort on April 13. Like many historical events, there is an Ohio connection. Robert Anderson was the brother of Charles Anderson who became Governor of Ohio in 1865.

Here is a list of interesting facts about Ohio's participation in a conflict that continues to fascinate us more than 150 years later:

QUESTION: How many troops from Ohio served in the Civil War?

ANSWER: Over 300,000 Ohioans served in the Civil War, the third largest number of soldiers of any Union state.

Q: Who was the youngest Civil War soldier from Ohio?

A: Joseph Fissell from Circleville was the youngest Civil War soldier from Ohio to serve in the Union Army. He was 11 years old when he enlisted as a musician in the 45th Ohio Volunteer Infantry on Aug. 1, 1862.

Q: Who was a well-known Civil War nurse from Ohio?

A: Mary Ann Ball Bickerdycke, who was born in Mount Vernon, traveled with the Union armies and established more than 300 field hospitals during the war.

A: Presidents Rutherford B. Hayes and William McKinley both served in the 23rd Ohio Volunteer Infantry.

Q: Where in Ohio were Confederate prisoners held?

A: Confederate prisoners were house at Camp Chase in Columbus and Johnsons Island on Lake Erie.

Q: Who were the Ohio Governors during the Civil War?

Q: Which general led the Union Army to its first major victory?

A: In February 1862, Brigadier General Ulysses S. Grant from Brown County, Ohio, led the Union to victory at Fort Donelson on the Cumberland River near Dover, Tennessee.

Q: Which Ohio city was braced for Confederate attack?

A: In the fall of 1862 Cincinnati was preparing to be attacked. A militia force dubbed The Squirrel Hunters was called up by Governor Tod to defend the city and the Black Brigade built defenses.

Q: Who was the first recipient of the Medal of Honor?

A: Jacob Parrott, a private in the 21st Ohio Volunteer Infantry was awarded the first Medal of Honor for his role in Andrews Raid.

Q: Where and when was the only Civil War battle fought in Ohio?

A: At Buffington Island, a spot east of Pomeroy on the Ohio River, a Union Army column routed a Confederate cavalry force led by General John Hunt Morgan on July 19, 1863.

Q: Where was Confederate General John Hunt Morgan, who led a cavalry raid in Ohio, imprisoned?

A: Morgan escaped from Buffington Island. On July 26, 1863 he was captured near Salineville and sent to the Ohio Penitentiary in Columbus. He eventually escaped again.

Q: Which politician ran unsuccessfully for Ohio governor from Canada?

A: Clement Vallandigham, a leader of the Peace Democrats, was arrested for treason in 1863 and exiled to the South. He escaped to Canada where he was nominated the Democratic candidate for governor. Vallandigham was defeated by John Brough.

Q: Who was the highest ranking Union soldier killed on the battlefield?

A: Major General James McPherson from Sandusky County was killed in battle July 22, 1864 during the Atlanta Campaign.

Q: What was the first Black infantry regiment raised in Ohio?

A: The first regiment of Black recruits from Ohio formed the 127th Ohio Volunteer Infantry.

Q: Where were Civil War battle flags kept after troops retired their colors?

A: The retired battle flags were kept in the Relic Room at the Ohio Statehouse. Until 1916 veterans groups could check out their flags for parades and reunions.

Q: Where in Ohio did President Abraham Lincoln's body lay in state?

A: After his assassination in 1865, President Lincoln's body traveled by train from Washington, D.C. to Springfield, Illinois. It generally followed the path that Lincoln traveled when he went to Washington as the President elect in 1861. The funeral train stopped in Cleveland and Columbus to allow Ohioans to pay their respects.

Q: How many Ohioans died in the war?