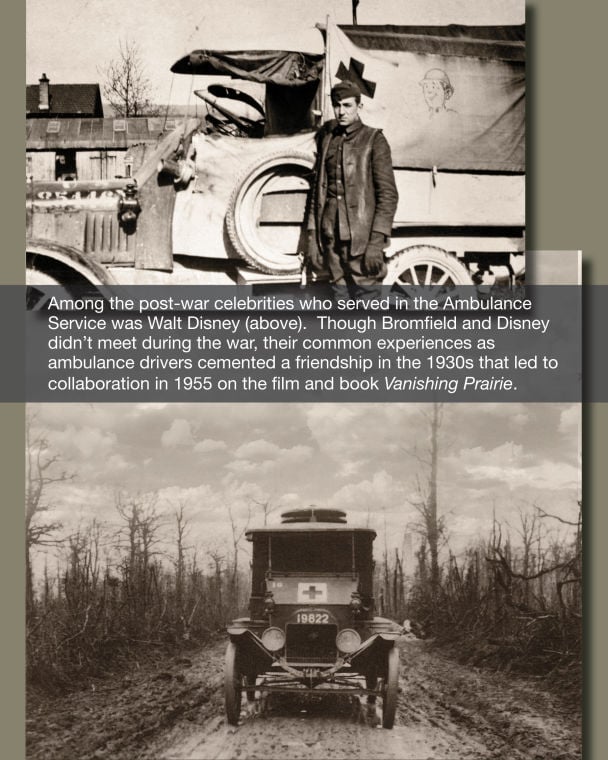 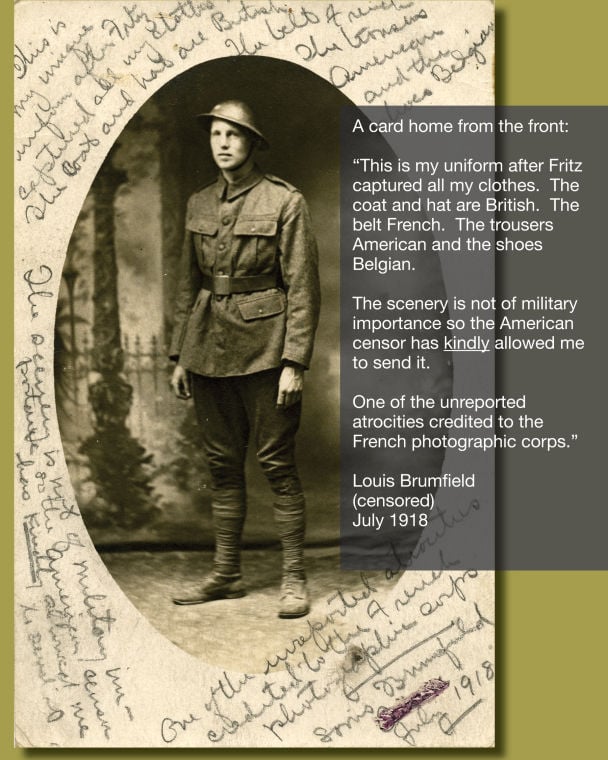 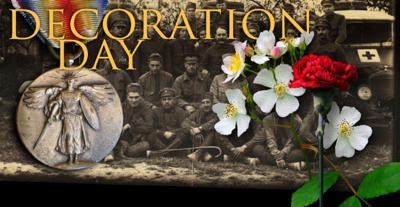 This is a decoration to the memory of a Richland County veteran—a simple wreath trimmed in carnations and roses. Memorial Day was known for a century as Decoration Day, a time to decorate the graves of America's soldiers, and this will serve to remember one who came back alive from World War I: Private Louis Bromfield.

When he is recalled around here today it is either fondly, as a congenial famous farmer, or in awe, as a prize-winning author and nationally recognized celebrity, or perhaps uncomfortably, as a champion of the multiflora rose plague.  In whatever manner he is recalled, however, it is as an adult, as a mature and time-worn man.

But he was first known in Mansfield as a modest kid who grew up on Third Street. The neighbor kids were puzzled by him and their parents were wary, because he was perhaps a little too smart and talked like he was far older than his years about royalty and high society. He was likable enough, but his classmates recognized him as somewhat immature. And no one in Mansfield really expected anything of him. They were all surprised 10 years later when he was suddenly famous.

So what happened in those ten years to turn an awkward and naive teenager into an internationally recognized writer of novels that showed sophisticated insights into the lives of very worldly characters? The answer to that is World War I.

Out in the world

In 1916 young Lewis Brumfield was at Columbia University when students were being recruited as "gentlemen volunteers" by the American Field Service to drive ambulances in France as a humanitarian effort before the United States committed to the war.

He was 20 years old, bored with classes and restlessly eyeing the adventures presented by the ongoing European War.

Driving ambulances didn't really appeal to him, but when he saw them developing a corps of balloonists he signed up eagerly. Almost immediately the US declared war on Germany and the American Field Service was appropriated into the US Army, so he crossed the Atlantic on a troop ship to drive an ambulance for the French Army.

Exposed to the front line horrors of war, transporting wounded men around the battlefield, young Lewis Brumfield grew up overnight.

The Education of a Small Town Boy

In his notes on the war, Bromfield explained how his fellow soldiers expanded his understanding of the range of humanity.

His company was, "a mixed, almost incredible assortment of men all under twenty-five and many under twenty, which resembled somewhat the more ignominious side of the Foreign Legion. Among them was an assortment of conventional college boys—by far the dullest element—four or five actors, an equal number of musicians or music students, a couple of budding newspaper men, and a professional dancer.

“As time passed it developed that one among them was a plain crook who couldn't help thieving even in the army. Another had been in a small way, a dope peddler. Two at least could only be described as pimps. And a half dozen others were grifters and racing touts. Add to these, two theological students, two Georgia-Florida crackers who mysteriously appeared out of nowhere, and a pair of real shillelagh Irishmen from Jersey City.

“This was a startling group to a young kid who had been well brought up in an Ohio small town, for as association developed throughout the war, I became slowly aware that for the first time I was being tutored in the seamy side of life. It was a course of training I could probably not have obtained under any other circumstances in the same abstract and harmless fashion.”

Words on the War

There were many successful authors in the 1920s, like Hemingway and Fitzgerald, who launched their literary careers by writing about the war. Bromfield never wrote about the First World War, however, and only refers to it obliquely in his stories as a sort of societal phenomenon—somewhat removed and not in any way that was personal. He wrote to his family "I hope to be one of the distinguished few who has not written a book on the war."

Yet there exists an unpublished manuscript in the Louis Bromfield Collection that does serve as a memoir of his experiences in France, and offers a clear insight into the awakening he went through as a result of his time in the Army.

In his unpublished memoir, Before It Is Too Late, he wrote,

"Looking back now as a veteran, not only of war but of life, I know that I was then the most fortunate of young men, for now I know—and know profoundly—types and characters whom I could not possibly have encountered under any other circumstances in life. Under the stress of fear and death, I learned much that I could not have learned otherwise though I lived more than a century. For under the stress of war in the terrible intimacy in which we lived, I knew the men with whom I aged, lived, and slept in a way I could never have known them otherwise.

"The experience with that particular [Army group] was a little like a hothouse in which strange and sinister noxious and insect-devouring plants grew side by side with innocuous and well-behaved, conventional carnations and roses."

This is a decoration to the memory of one of Richland County's veterans, a simple wreath trimmed in carnations and roses.

Excerpts from Before It Is Too Late:

The Louis Bromfield Collection in the Rare Books & Manuscripts Library of the Ohio State University Libraries.

McKee grew up in Mansfield and started gathering local history when he was in the sixth grade, but left here in the 1980s with no intention of ever returning again.  After a number of years in California he realized that what he knew best was Richland County history, and that if he had anything to offer the world it was here.  So he came back home and has spent the last fifteen years telling our story in books, paintings and film.