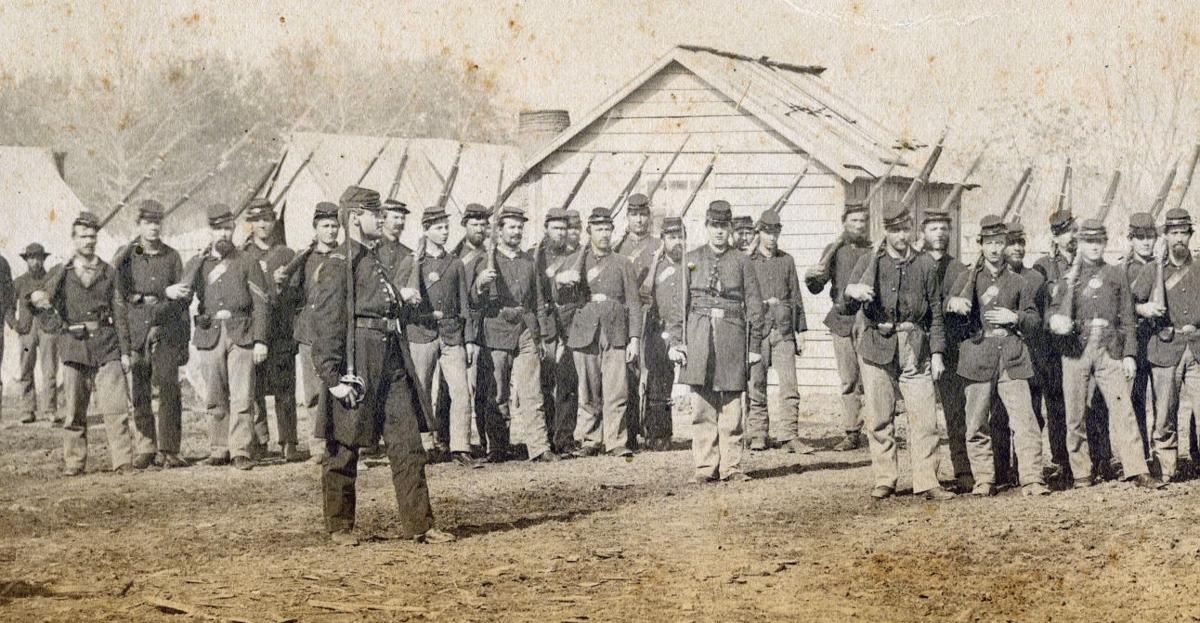 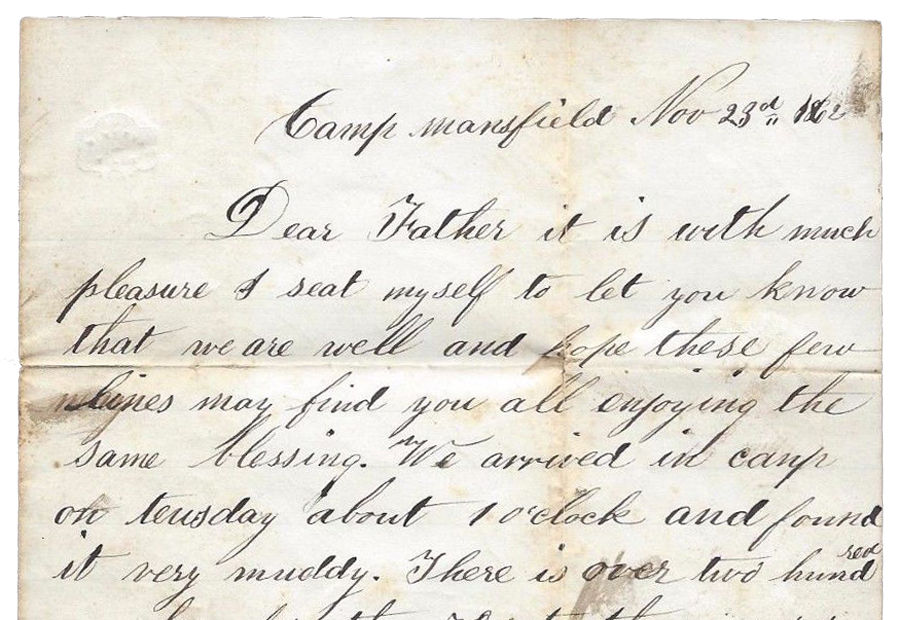 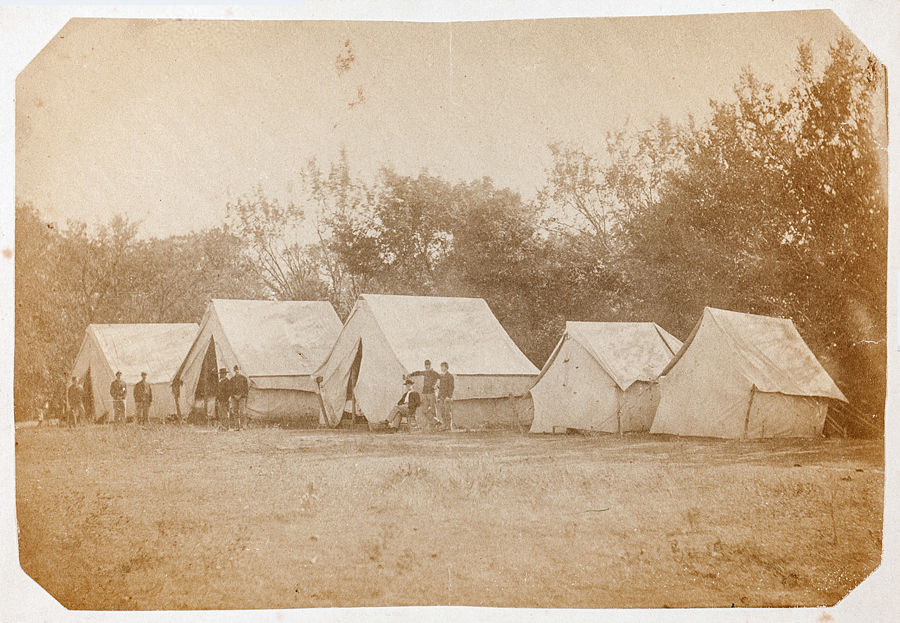 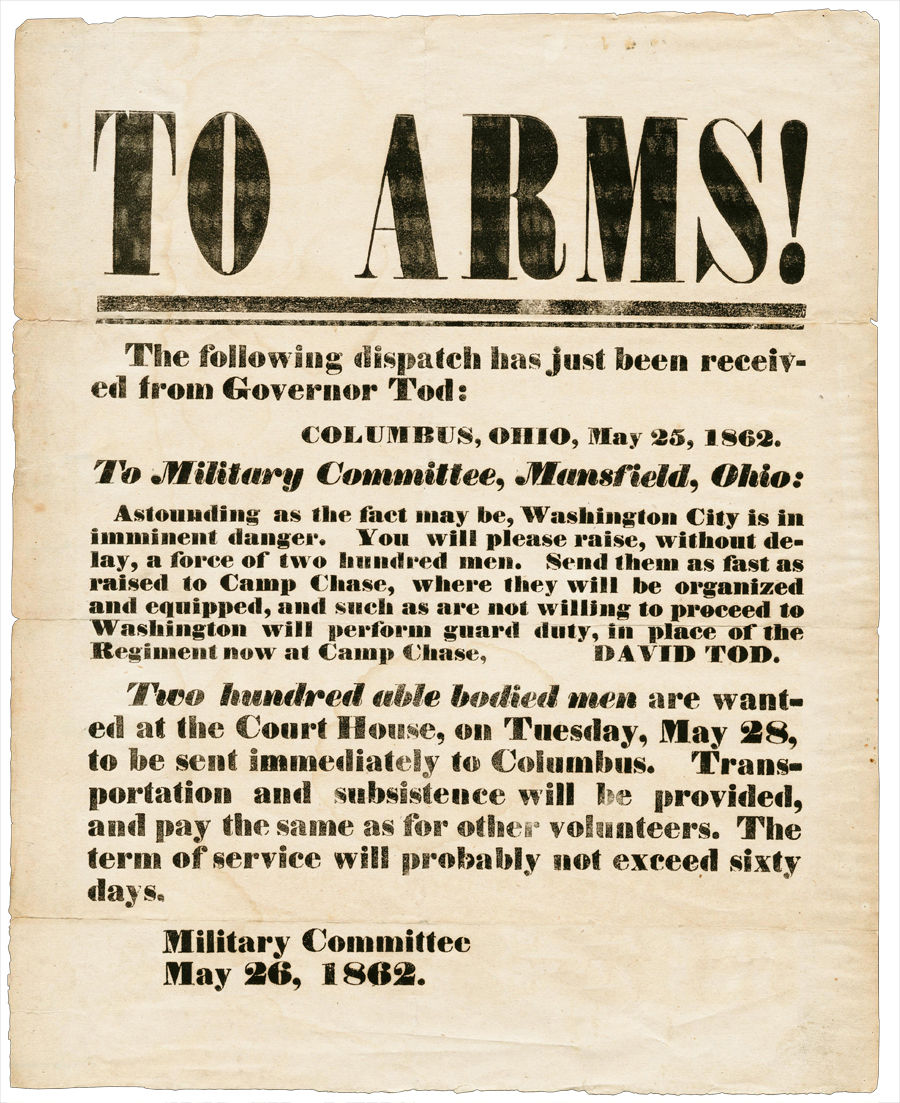 There is ground in the northern end of Mansfield that has been tamped hard by the feet of marching men, and tempered sacred by the yearnings of those who were willing to die if their sacrifice could preserve our nation.

This land — two large plots — stood service as training grounds for soldiers in the Civil War.

One of them — the first of them — was situated on the grounds where the Ohio State Reformatory and Richland Correctional Institute are today.

The second camp was located off Springmill Street, where today there are neighborhoods of houses in the streets south of Ohio 30.

The only vestiges remaining today in these sites to give evidence of their military and patriotic service 150 years ago, is found deep in the dirt. There are bullets and buttons that still turn up, and brass fittings from horse harnesses that once pulled wheeled cannon.

When the first cannon balls flew in 1861 that set the war in motion, Mansfield responded immediately. The shots were fired April 12, and by April 18 a contingent of 78 men left town on a train to Columbus, inaugurating the 1st Ohio Volunteers.

These first troops did their training in the square, which was certainly large enough to accommodate such a modest company. Within a few months however, the recruits numbered in the hundreds, and then thousands, so local colonels were hunting for a place where target practice wouldn’t put townsfolk in danger.

On Aug. 17 they selected a farm northeast of town as the land for their training camp, and by Aug. 19 the grounds were loaded up with government-issued tents, uniforms and rifles. By Aug. 23 there were 400 men in blue marching around in formation.

Only nine days later, 750 soldiers shipped out on the train to Columbus as the 32nd Ohio Volunteer Infantry, and the very next day, Sept. 4, the 15th OVI moved into camp to start drilling.

If this seems like amazingly rapid development, it can be accounted for wholly by the terrific enthusiasm and urgency that washed over the community during the onset of national peril. A couple years later, after the first thrill had subsided, nothing related to the war moved that quickly again.

It was called Camp Bartley at first, named for the recent Ohio Governor (1844-46) from Mansfield, Mordecai Bartley. Later in the war this camp was referred to in military documentation and newspaper headlines as simply Camp Mansfield.

It was established at the side of Olivesburg Road (Ohio 545), and a journalist reporting to Cleveland in 1861 wrote, “The site for the camp is an admirable one; on a gentle slope (a meadow) of rising ground, facing and descending southward, with large springs of pure water on each side. In addition a large pond has been constructed within the camp for bathing purposes, in which the water is seven feet deep.”

The actual site where the U.S. Army set up camp in 1861 would be found today in the area adjacent to OSR, on what used to be Reformatory land but is today enclosed in the fences of RiCI.

There were 19 training camps initially in Ohio, but this particular army base became newsworthy around the nation in October 1862, when it was established as a military stockade for political prisoners.

All of the men incarcerated at Camp Mansfield were public officials, politicians, or newspaper publishers who defied the U.S. government by encouraging young men to ignore summons to war service and dodge the military draft.

From our point of view 150 years later, as we consider the Civil War through filters of time and history, we are accustomed to assume because we won the war, that the goals and sentiments of our community were the same as those expressed by the U.S. government in Washington D.C.

This is actually far from the case. Evidence of local newspapers, correspondence, and documentation of voter registration suggests the equally prevalent 1860s sentiment in Richland County was very much opposed to the war. A number of our villages and towns suffered a particularly wrenching division of community purpose not unlike that experienced by the nation itself as it split.

This state of local social division, in a lot of ways, makes this Union Army training camp in Mansfield even more poignant.

A number of journalists remarked about the heartbreaking scenes they witnessed in the recruiter’s office at Camp Bartley. They saw parents who were unequivocally opposed to the war, yet they still brought their sons to Mansfield in order to don a blue uniform in civic duty.

From the first day that bugle calls, rifle fire and cannon booms echoed into Mansfield from the north end of town, the military camps were an irresistible tourist attraction.

It was like a giant uniformed fair with thousands of young men on display.

The next day after camp opened, the Commandant at Bartley issued orders that were printed prominently in Mansfield’s newspapers clearly specifying that ‘No ladies unaccompanied by gentlemen would be permitted on the grounds.’

Everyone else was cheerfully received because, in those days, visitors brought food. Baked, raw, cultivated or unprocessed, anything consumable was wholeheartedly welcome.

One of the regimental histories written about camp life in Mansfield says “on pleasant days, and particularly on Sundays, the camp was visited by throngs of people. The evening dress-parade was the crowning feature of each day’s exercises, and was witnessed by hundreds of spectators.”

Diaries that have come down to us from folks in Mansfield leave no question of how exciting it was to have the cadence of military drums pulsing in the breeze.

Letters from young recruits open a time portal to what a different world it was back then. Private Joe Pritchard, of Company B 120th OVI, wrote home to his folks on Aug. 27, 1862:

“I do not know when I will get a furlough. I could get one the first of next week but I would rather wait until the last of it so I could attend the singing Saturday night.”

Pvt. Pritchard died in 1863 in Louisiana.

Camp Mansfield was broken up later that year. When construction began on the Ohio State Reformatory in 1886, long after the war was over, there were still old wooden office buildings and quartermaster stations standing on the grounds.

The soldiers of Company H 120th OVI trained at Camp Bartley in Mansfield.  This portrait of them was taken in Louisiana in 1863.

Virgil Hess (1904-1996), local historian and Civil War geek, assembled most of these relics.