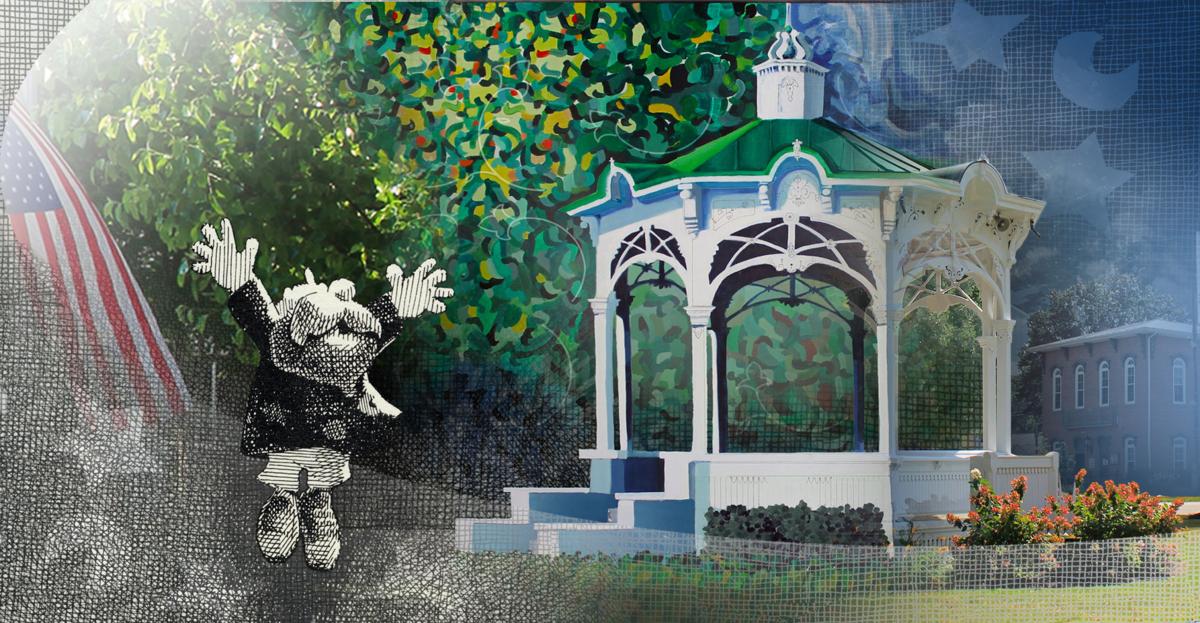 Hauck was able to create his timeline of American architectural styles using actual homes found on the streets of Bellville.

The cover of Bumbleflash, as depicted on a promotional flyer. 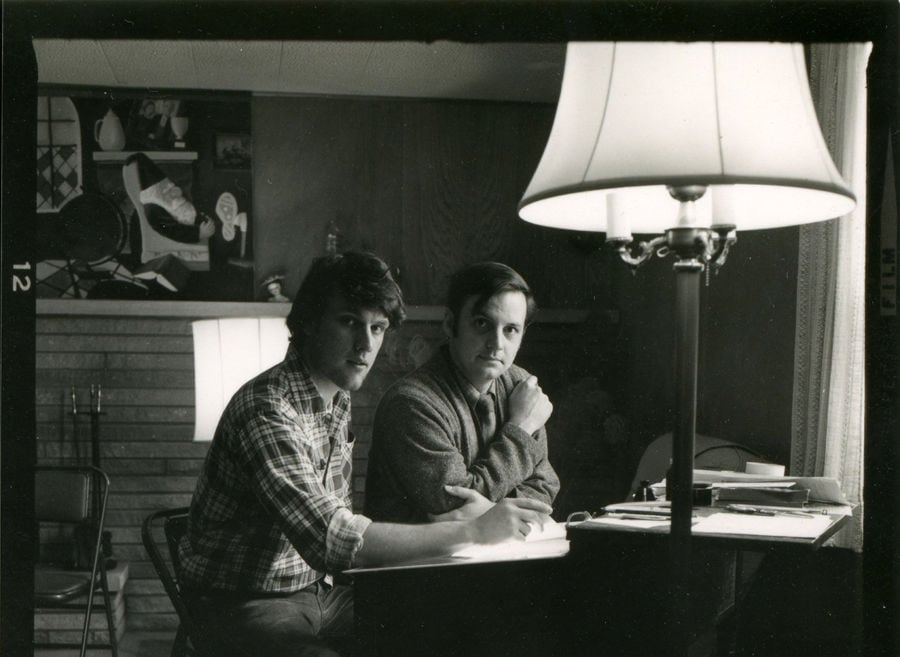 From the dust jacket: author Rick Sowash (right), illustrator Tim McKee, with Bumbleflash in the background.  Photo by Otto Schmidt. 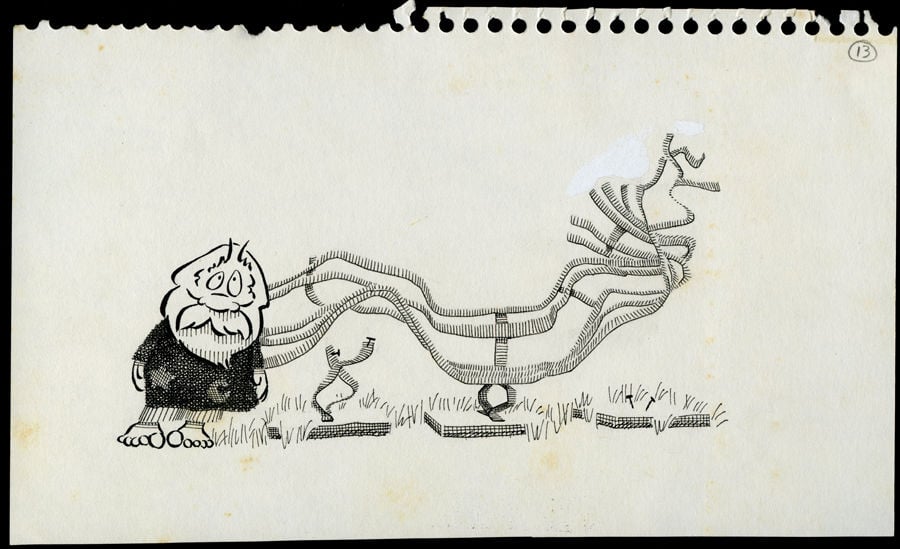 One major theme of the book is developed though Bumbleflash's dismay at the way 20th century commercialism was destroying all the qualities  of small town life that he found endearing.  In this illustration he stands aghast in the face of destruction wrought by the construction of a "Superstore," an oddly prescient 1970s foreshadowing of Walmart. 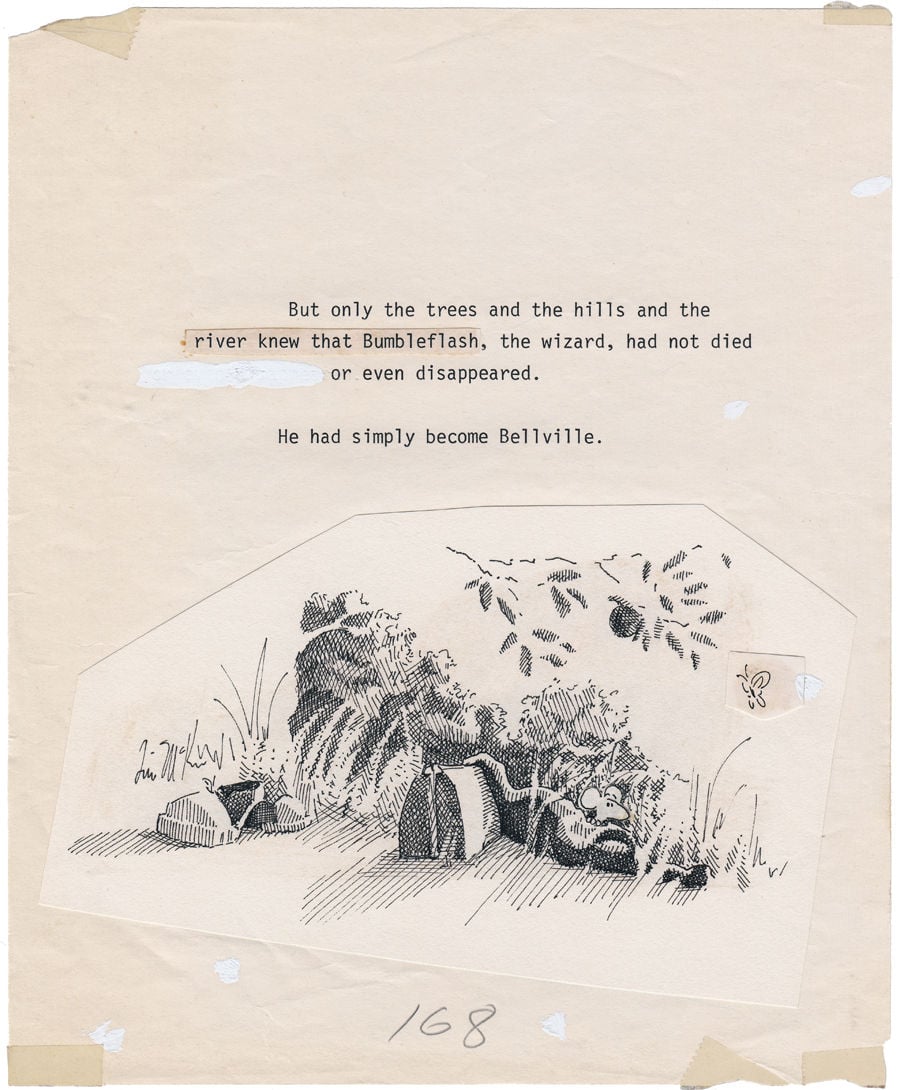 The manuscript of Bubmbleflash was executed in 1976 when 'cut and paste' actually meant scissors and glue.

Bumbleflash was produced with a centerfold bird's-eye view of Bellville. 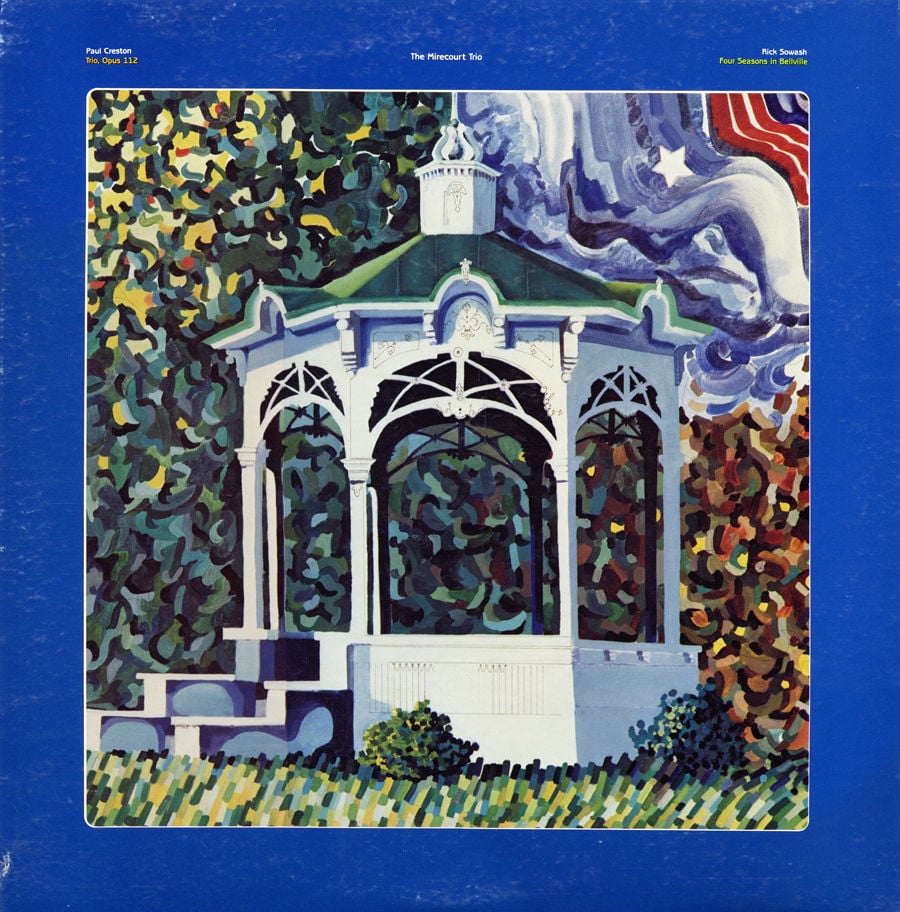 The first recording of Four Seasons in Bellville was issued as an LP record in 1980. 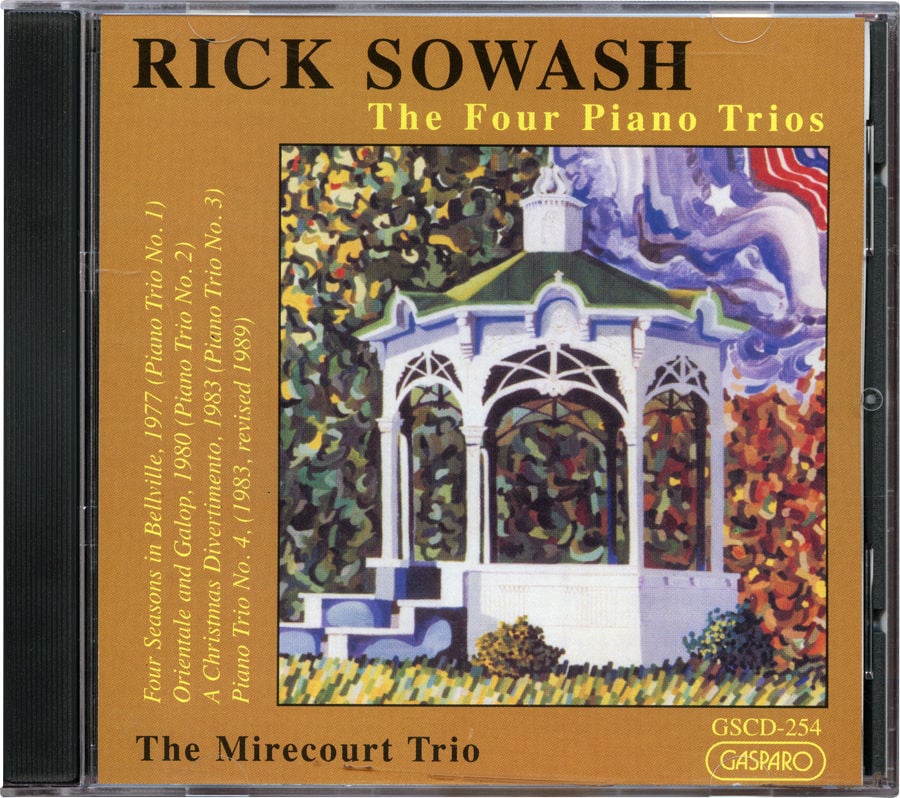 Four Seasons in Bellville was issued as a CD in 1991.  For more information about it and other recordings of Sowash music go to www.sowash.com. 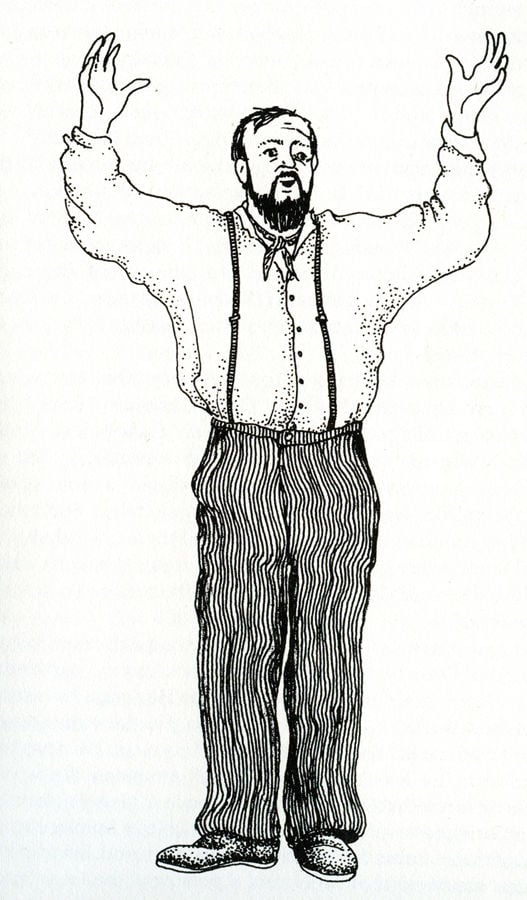 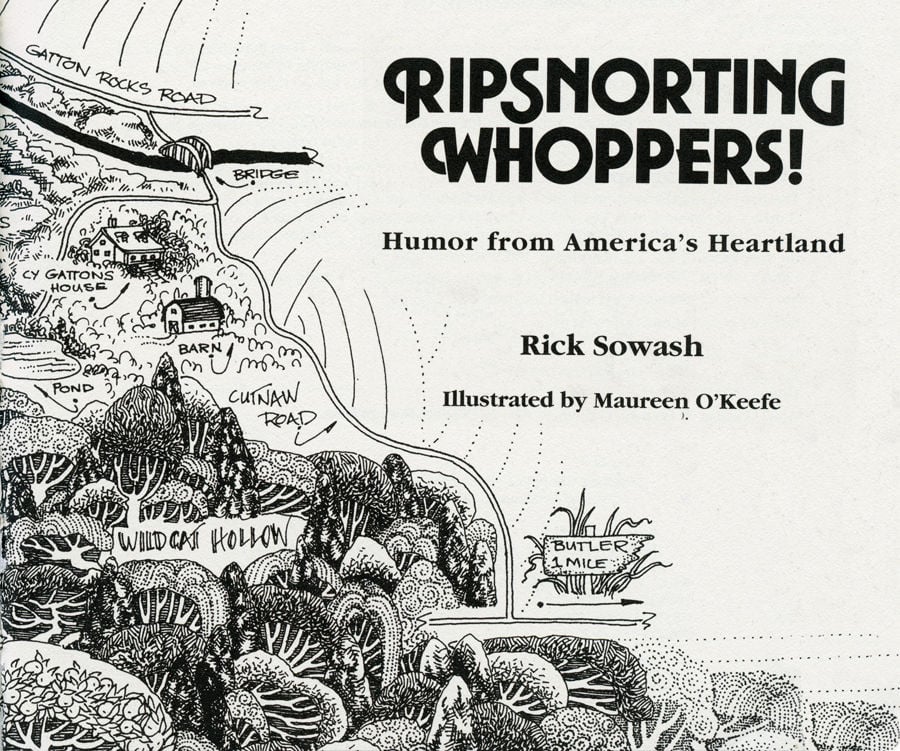 The further mythologizing of Cy Gatton and the valley of the Clear Fork took place in 1994 when Sowash's Ripsnorting Whoppers! was published, committing to print many tall tales of the oral tradition.  The title page of the book has a whimsical map of the environs that Cy Gatton immortalized in his stories. 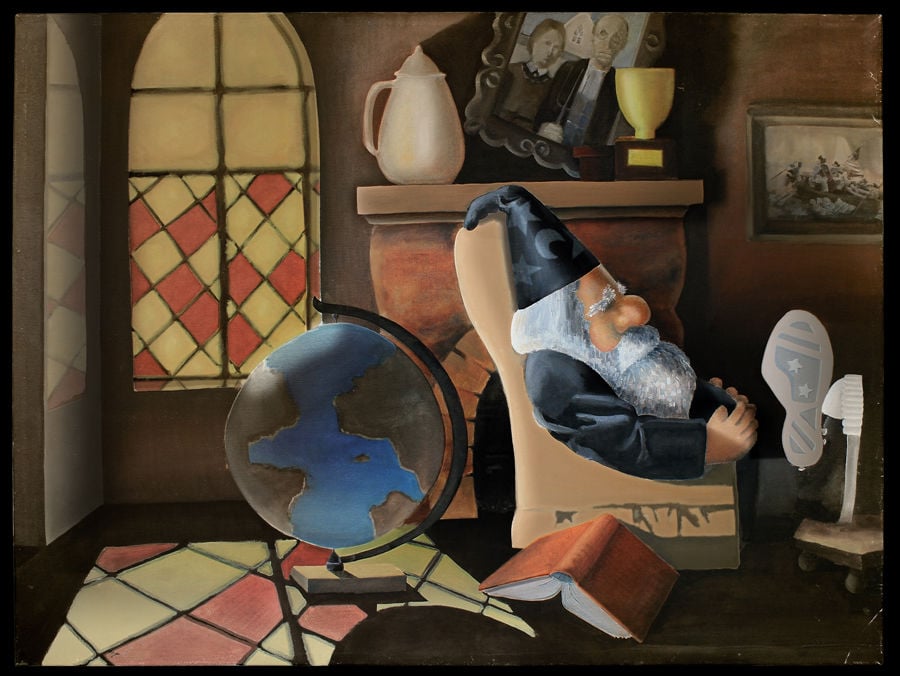 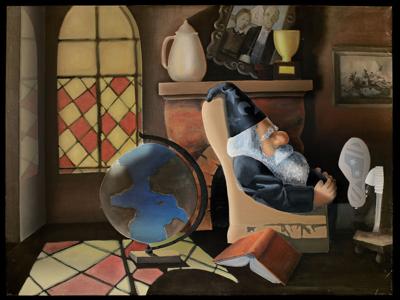 Any town can get itself on the map; and every town has a history. These are the ordinary requisites of identity. But if a town is to rise above these ordinary identifiers, and achieve a more mythic status in the perception of public imagination, it needs one more special resource: it needs artists.

A town is just a town until it becomes multidimensional; and that happens when it is given new form and interpretation by scholars and writers; celebrated through works by painters, poets, playwrights and actors. In this case, even a classical composer was part of the equation.

The town was Bellville, and in the 1970s and 80s it experienced an artistic renaissance of sorts, when it became the focus of books, plays, and powerful, evocative music.

The first inkling that the village was awakening artistic interest happened in 1975 when a scholar of American architecture published a book about Bellville.

Focusing on the splendid examples of homes and public buildings that had come through the 20th century intact, Hauck’s study recognized the sense of architectural integrity and tone the village had preserved, quite naturally and unselfconsciously, like a storybook village.

The author saw that Bellville had not been dramatically altered in appearance by the 20th century, as had so many other small municipalities, who had lost their character and charm to contemporary standards of commerce.

His book recognized that walking down the streets of town was like turning the pages of a textbook of American architecture.

The next awakening of the Bellville renaissance took place when a little wizard was shaken from generations of slumber by the seismic rumblings of modern culture. Disturbed by the values he found in the world he awakened to of the 1970s, the wizard set out to discover a place in America where modern culture would not encroach upon his sense of harmony.

The wizard was Bumbleflash, and the harmonious place he discovered was Bellville.

This is the plot behind a second book about Bellville to be published in two years. It was called Bumbleflash: A novel of Richland County by Rick Sowash, published in 1976.

The book was promoted optimistically as ‘the first novel of the Richland County Renaissance—the first set in this county since The Farm.’ (By Louis Bromfield, 1933.)

Paring the wizard’s tale with a popular novel by a major American author was something of a stretch…but only because there was nothing else to compare it to—there is nothing on the shelf quite like it. Bumbleflash is sort of a children’s book for philosophers; a kind of fantasy allegory.

It’s odd by any standards: even the margins of type defy straight lines and wander around on the page so that no two pages are alike. The book plainly states that the edition is limited to 500 copies, yet many of the ones you find are numbered in the 600s.

Critics at the time didn’t know what to call it, and booksellers today who list Bumbleflash online are equally baffled as to how to categorize the book. There is one word that often shows up in their listings however, and that is ‘charming.’ It appears on Ebay periodically for anywhere from $7.50 to $75.00.

As a love letter to the village of Bellville it stands unparalleled in American literature.

The 'sense of a place' that any town experiences is given depth through works of art.

Rick Sowash came on the Bellville scene as a novelist when Bumbleflash appeared, but his principal artistic orientation was as a classical composer. It was natural that his love for the Clear Fork Valley filtered through his artistic vision to emerge in the form of music.

The first major work of his to be recorded was: Piano Trio No. 1: Four Seasons in Bellville (1977).

In the 1970s, when Sowash’s music was being performed locally, the composer spoke about how an artist can convey the qualities of the local landscape and surroundings in a way that is so personal and intimate that it speaks to local folk as no other music can.

There is “a rolling quality of the music,” he said, “and tunes that go up and down; so that the audience can hear them in a special way, because they know innately the way the hills roll in Richland County.”

It’s not like the spirit of creativity suddenly manifested in the 1970s from nowhere: there was a strong tradition of creative genius already rooted in the Clear Fork Valley from half a century earlier. Another local storyteller, Cy Gatton (1863-1937) achieved local and national acclaim as an artist of language and tall tales.

This older tradition was an oral tradition and, in our time, this suggests theater. So, it was as a theatrical performance piece that the tradition reemerged in the 1980s.

Sowash devised a one-man show that brought Cy Gatton back to life and rescued his fabulous tales from obscurity. Though it was developed originally as a benefit skit to raise money for the restoration of the Bellville Opera House, through the next few years the Cy Gatton material was performed at least 120 times across the state.

The initial flowering of the Bellville renaissance ebbed when Rick Sowash left Richland County in the late 1980s, but there are still substantial landmarks in evidence of those 20th century decades of artistic blossoming. One of them is the Bellville Opera House, which came back to life about the same time Cy Gatton did.

Another significant result of the Sowash years in Richland County, was a downtown theater in Mansfield where he served as executive director during its rebirth as a dynamic landmark venue. The place was named at his insistence: the Renaissance Theatre.

In studying the Bellville artistic renaissance of the 20th century it is easy to see how the groundwork was laid for a further flowering in the 21st century of the ongoing Richland renaissance.