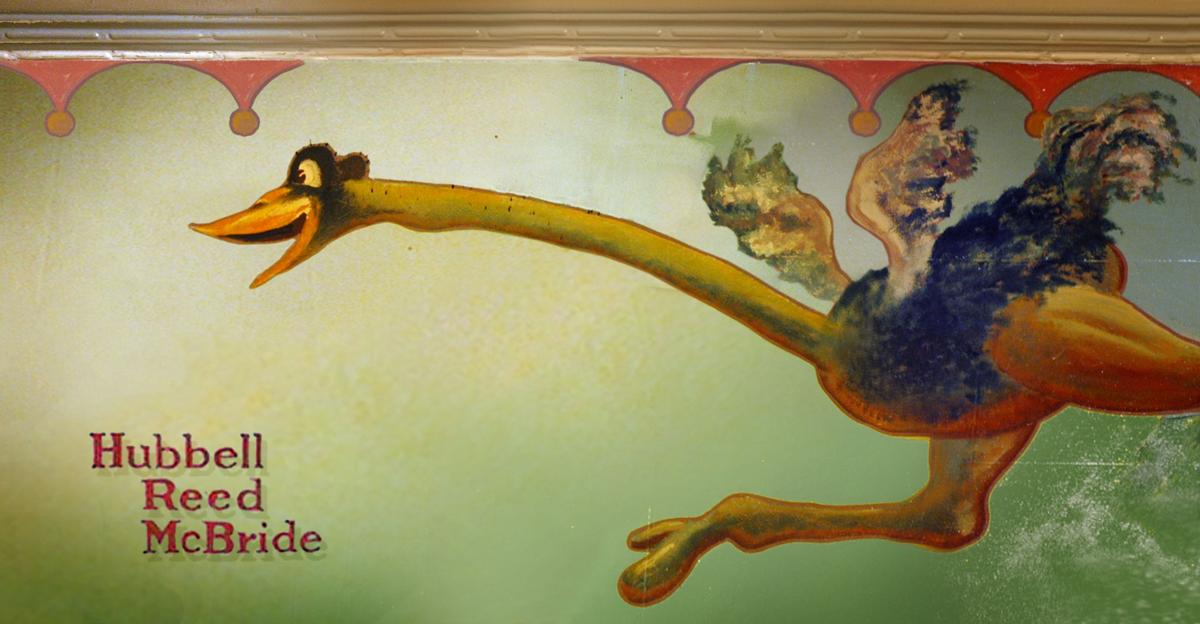 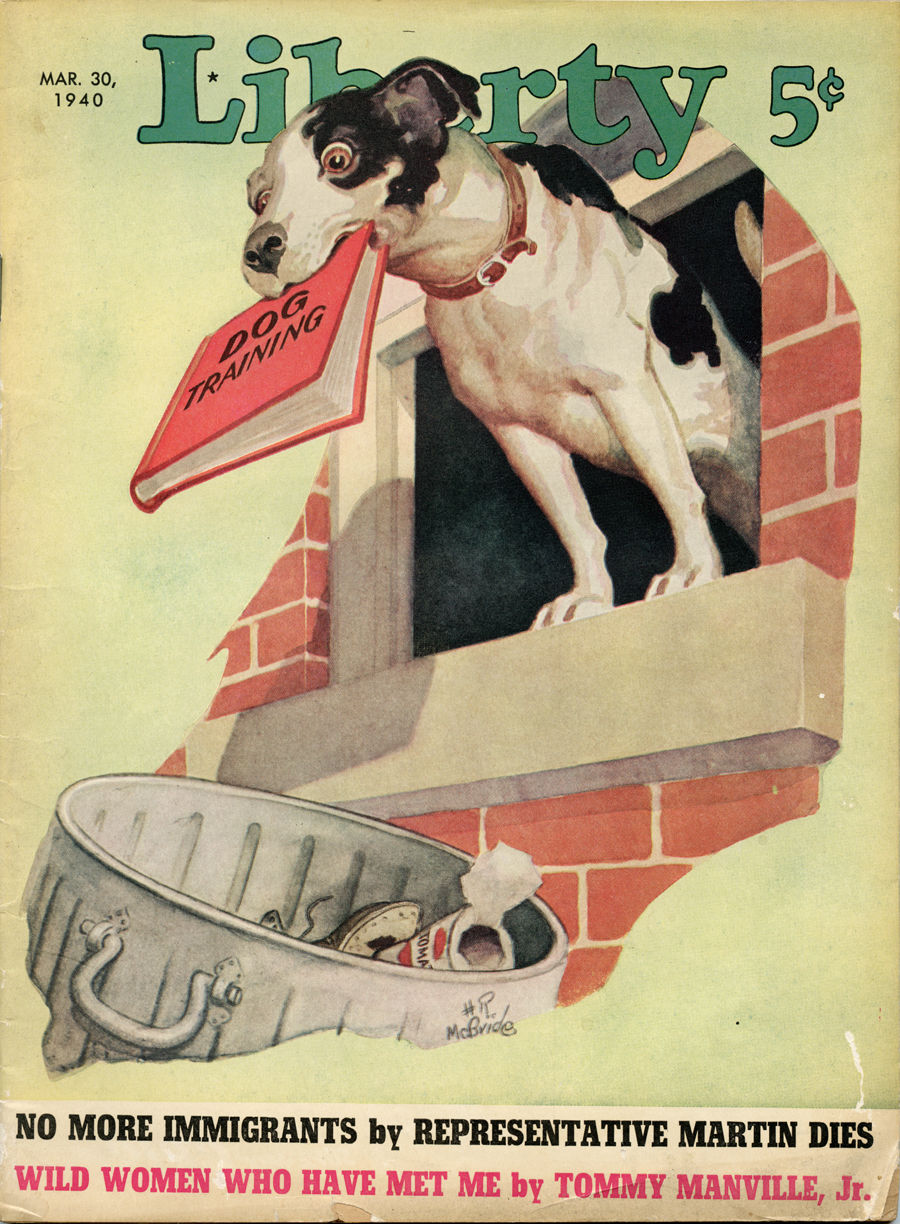 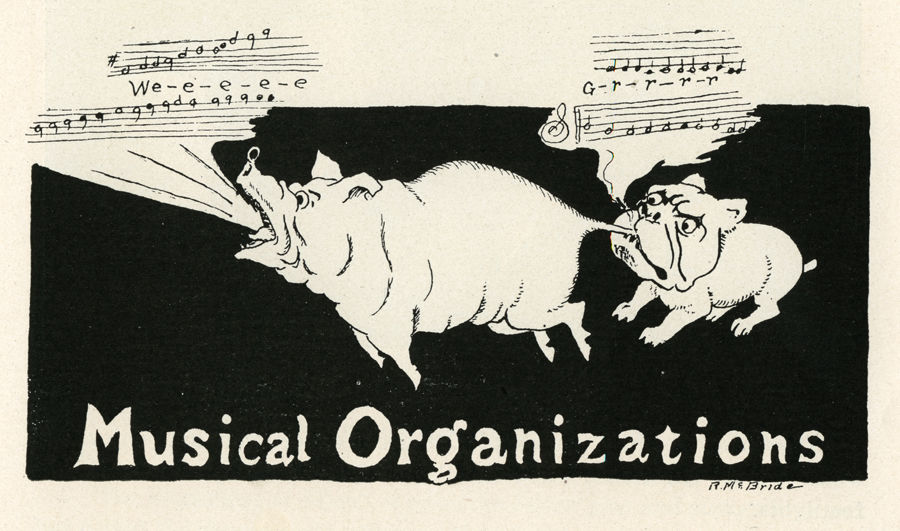 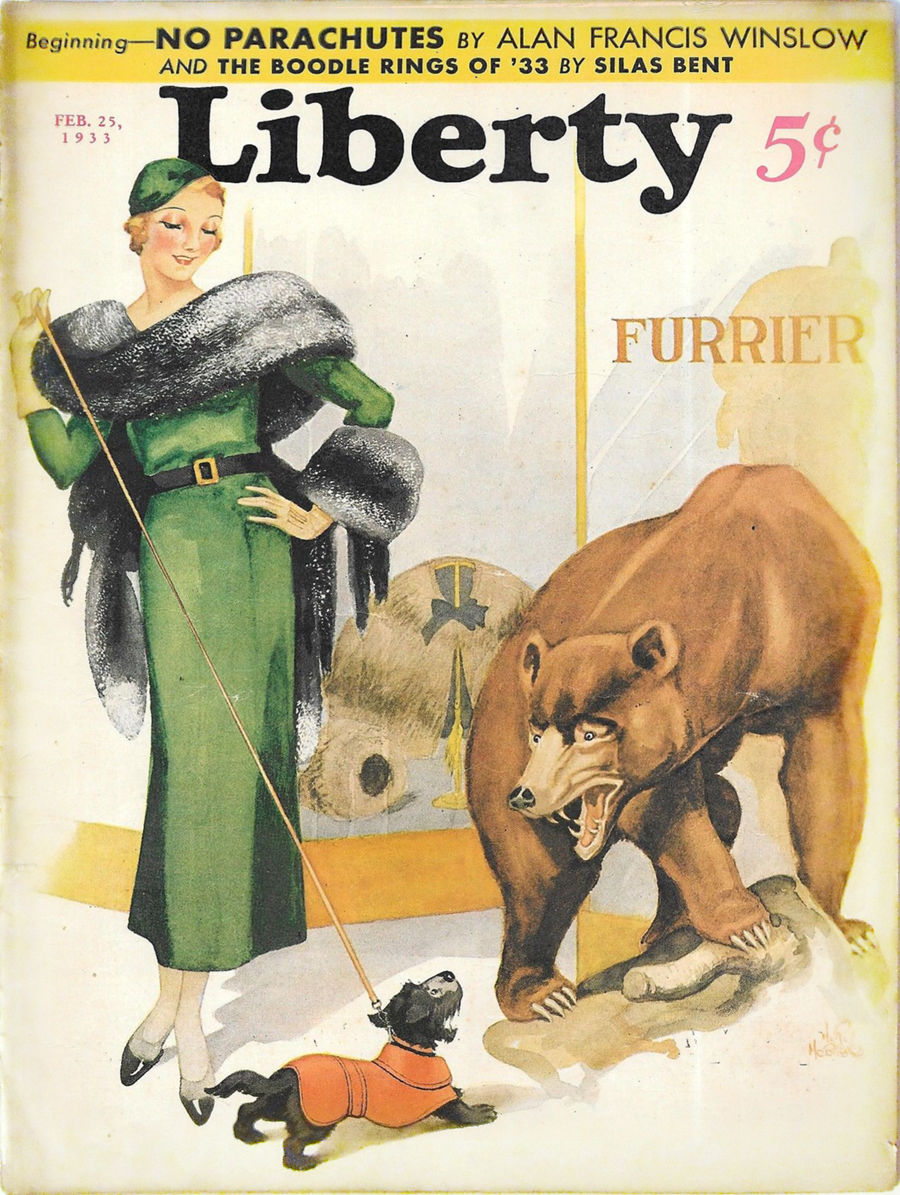 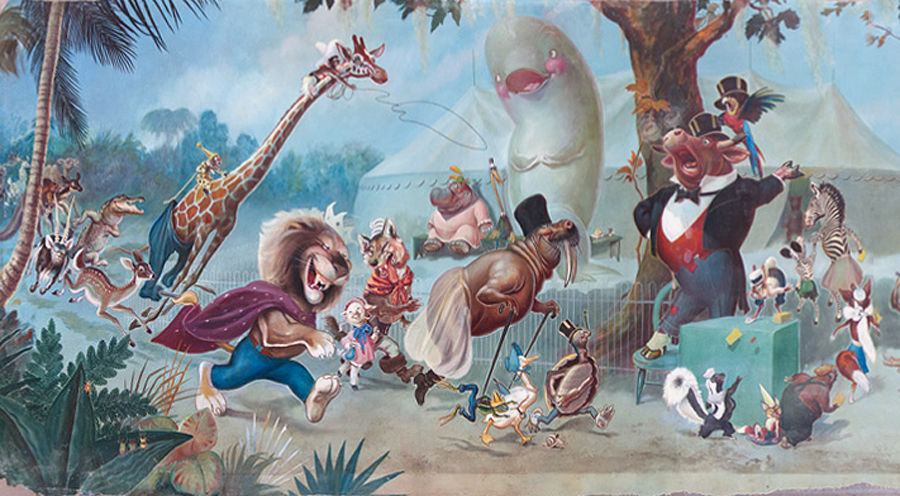 Reed McBride was commissioned to do a children's mural in a home on Park Avenue West in the 1940s, and fortunately he painted it on canvas that survived to this day: mounted on a wall in Colorado. 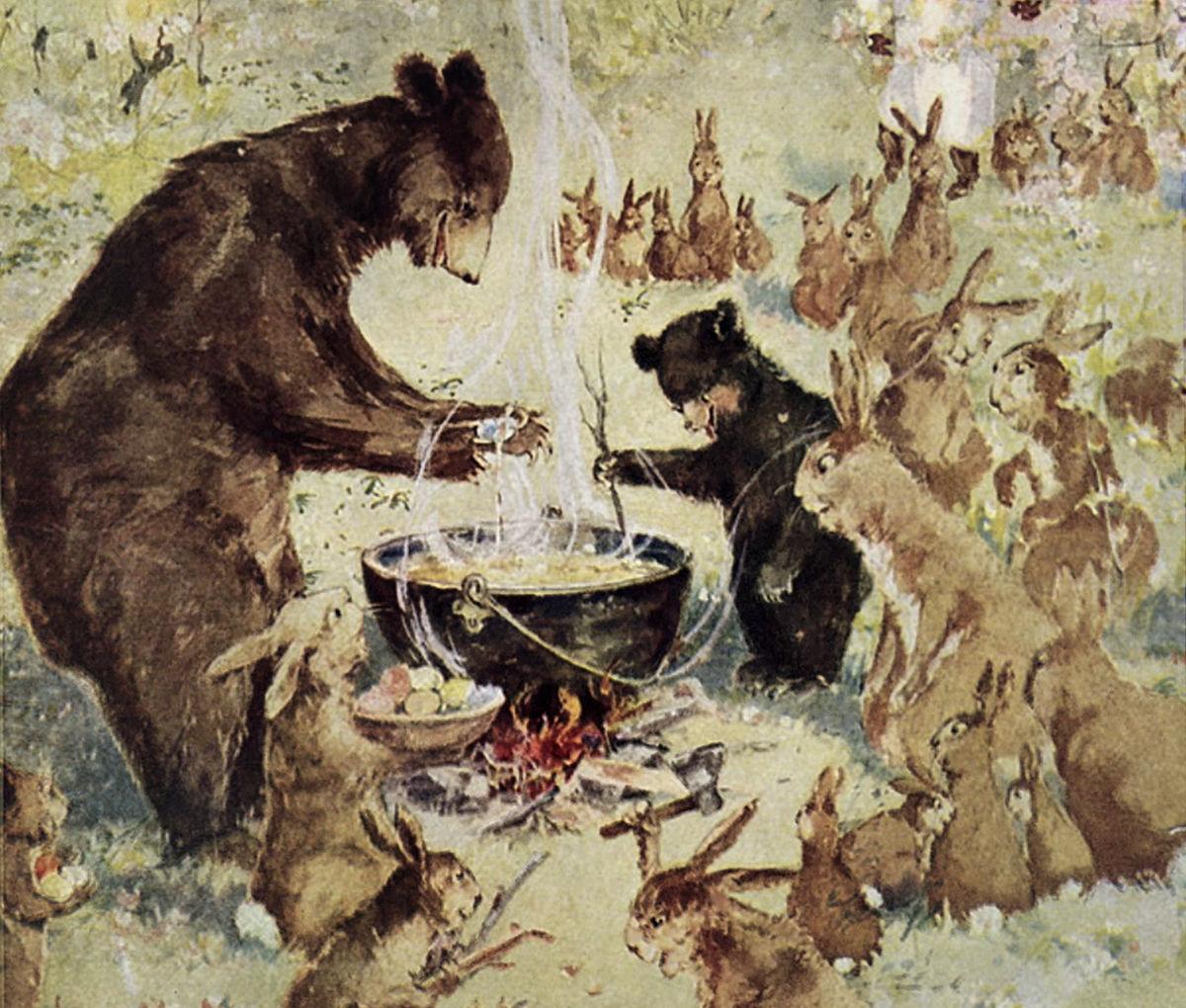 VerBeck's bears were in high demand with advertisers: here they eat Cream of Wheat in a 1912 Ladies' Home Journal. 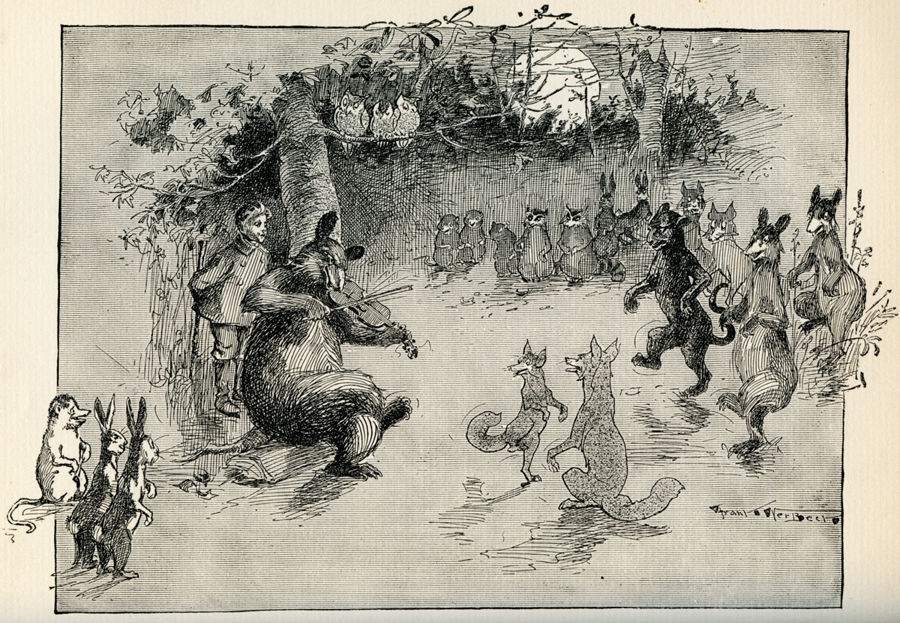 VerBeck illustration from The Arkansaw Bear by Albert Bigelow Paine, 1898. 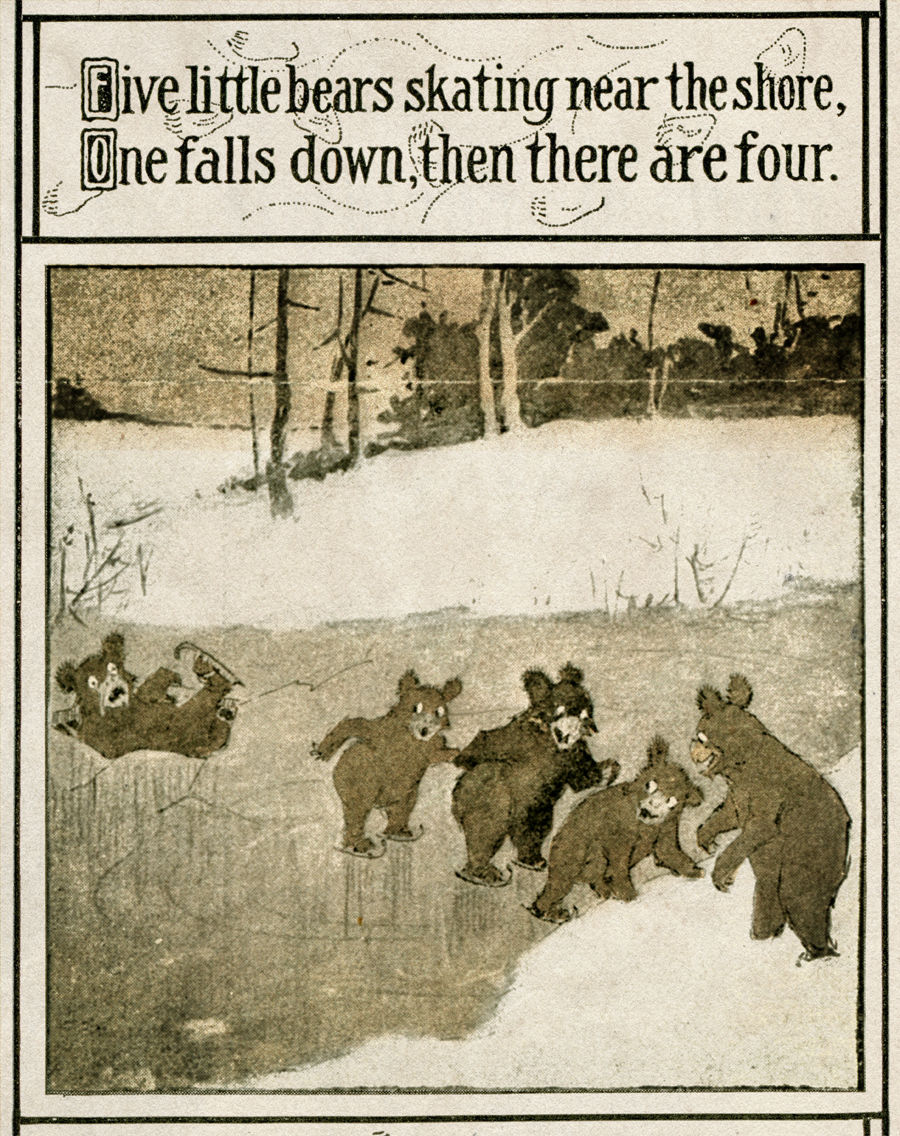 Ten Little Bears from The Children's Page of The Youth's Companion magazine, 1902.

Frank Verbeck illustrated the first printings of Rudyard Kipling's Just So Stories when they appeared in the Ladies Home Journal in 1900-1901.  This is from The Elephant's Child, April 1900. 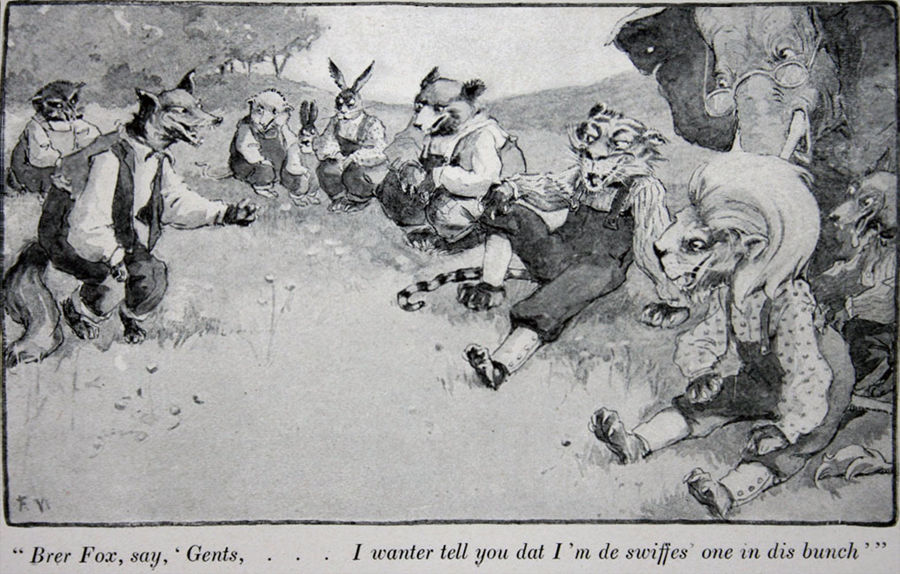 VerBeck leant his characteristic animal levity to a 1905 edition of Told By Uncle Remus by Joel Chandler Harris.

Some of his work from the early 20th century passed out of political correctness in recent decades, owing to the questionable stereotypes he portrayed during that era of racial insensitivity.  Nonetheless, even his Little Black Sambo books bring high prices at auction. 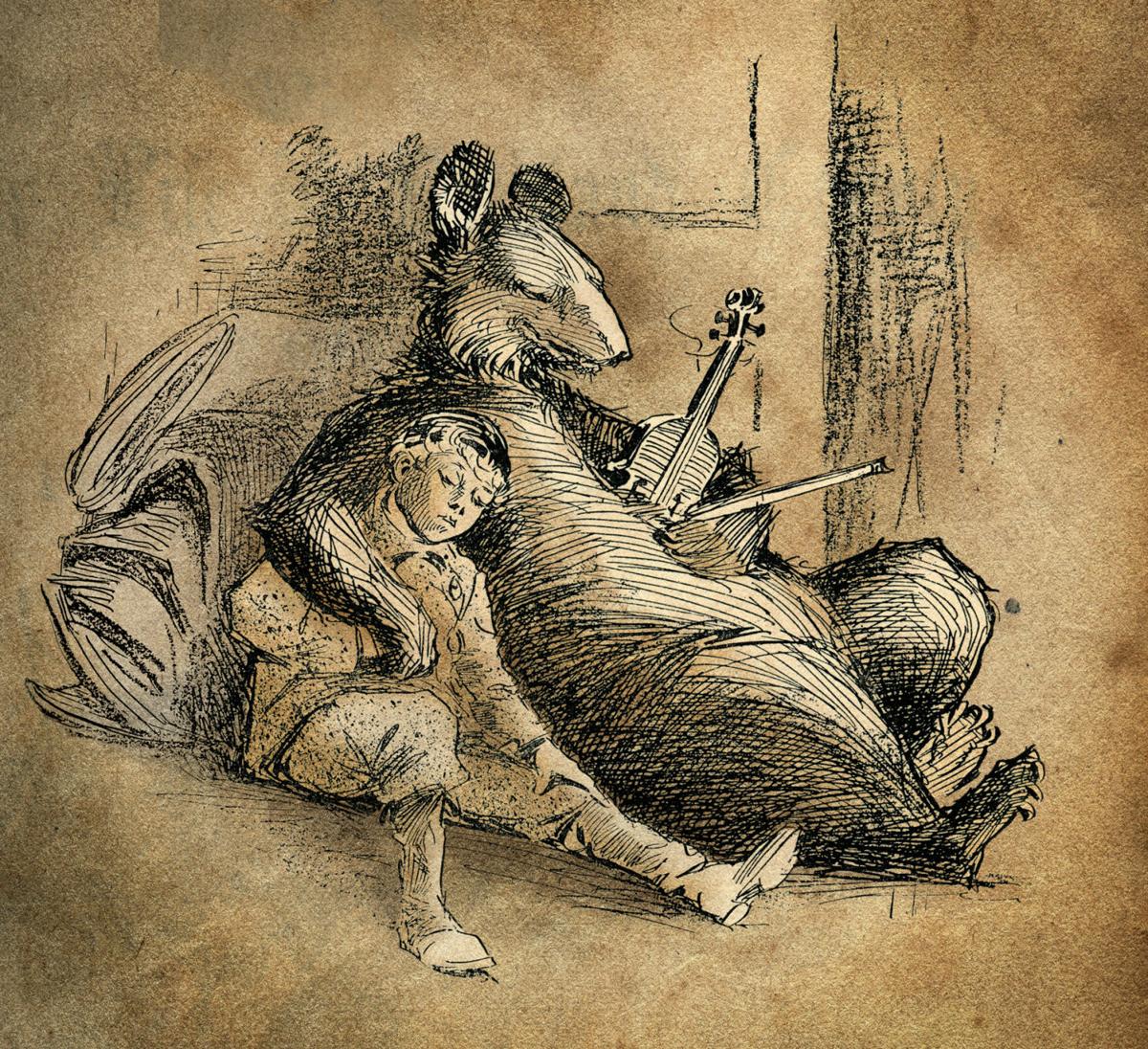 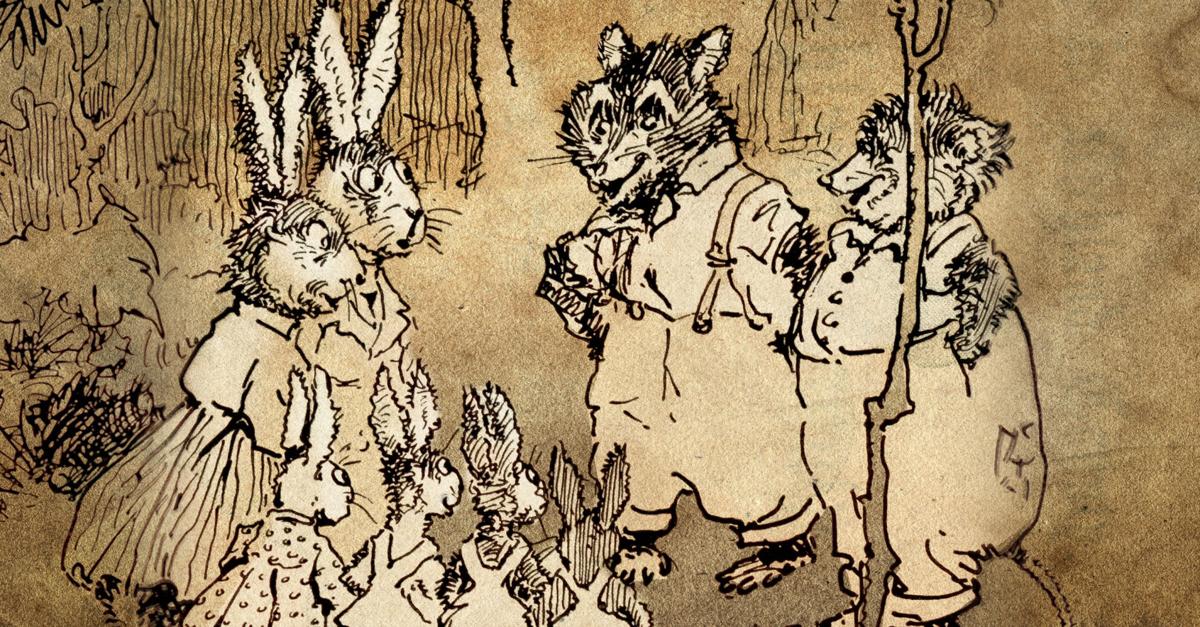 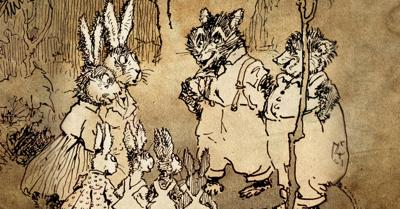 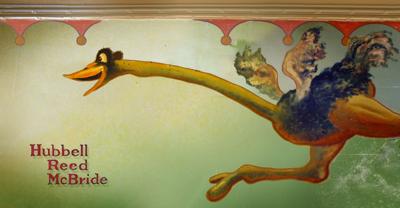 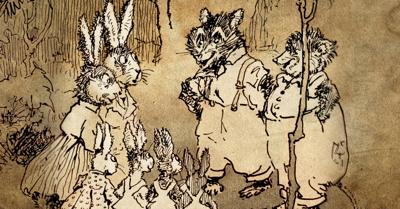 Two boys who grew up in Mansfield in different eras each developed a talent for drawing animals that make people smile; and they each took that art out into the world and touched the lives of millions of people.

I’d like to prove this now because I met a young man in Mansfield who told me that what he liked to do best is draw funny little animals; and it was a matter of some despair to him that there is no way to make a meaningful life out of that passion.

So, Shane, here is a moment of inspiration for you: so you can know that you are actually taking part in a fine old tradition of our town.

One of those artists, whose whimsical paintings consistently made the cover of several best-selling national magazines, was a local boy who launched his career in New York, and then walked away from his publishing success to spend his life in Richland County.

His given name was Hubbell but he signed his work HR McBride, and went by his middle name Reed.

Reed McBride had a talent that could have kept him in New York and ranked him among the top illustrators of his time, but he chose instead to use his genius here to raise the quality of our environment, and put smiles into the lives of everyone who encountered his playful images.

He was a boy at the turn of the century in 1900, and he grew up on a farm east of Mansfield on a country lane that is today called McBride Road.   He had 12 brothers and sisters so the workload was spread out enough to give him free time to sit with a pencil and paper making sketches.

Even from the very earliest works, his drawings captured expressive faces of the critters he knew with a characteristic humor and personality.  When he graduated from Mansfield High School in the Class of 1912, the Manhigan contained his first published illustrations…all of them cartoon farm animals.

He found a job in Cleveland making illustrations for a newspaper syndicate, but when they let him go after a year he had gained enough confidence to try the big market in New York.

Reed lucked out right away, befriending the founder of Editor and Publisher magazine who connected him all through the industry.  For the next 25 years he distinguished himself as cover artist for Liberty & Collier’s Weekly Magazine, and story illustrator for several top Hearst publications like Cosmopolitan and Good Housekeeping, as well as the Saturday Evening Post.

His work is easily recognizable for its warm humor, and for animals with memorable personality.  McBride’s work sometimes appears in print signed with a simple HR.

In 1943 Reed’s health took a tumble, and so he and his wife made a break from the city to spend some time with family, but as soon as he got back to Richland County he knew he was home for good.  In an interview in 1945 he said, “When I was a kid I could hardly wait to get away from the farm and into the big cities.  Since I’ve returned to Mansfield I’ve found the happiness I was searching for during the years I spent in New York.”

With a wealth of experience in graphic arts, Reed was a gift to the community in the 40s and 50s, painting a wide canvas of all sorts: from sacred scenes in the First Congregational Church in Lexington, to background drops for the Mansfield Players and Children’s Theater.

In the 1940s Reed McBride painted several murals in Richland County that became well-known landmarks in stores, churches and the Municipal Building. This is the one he created for the Ven-Mar market on Marion Avenue.

Frank VerBeck came to Mansfield as a schoolboy, when his family moved here in the 1870s.  He was sketching neighborhood critters—dogs, cats, mice, horses—from the time he was small; but the animals he became famous for were bears.

When he was interviewed in London in 1916, the reporter asked Frank when it was as a child that he had seen his first bear.  Frank was 58 at the time; had drawn and published over 3,000 bears in magazines and illustrated books; and was recognized around the world for his distinctive style of portraying bears.

The reporter posited, “Your bears are so charming that I suppose you must have gone out in the woods and made many studies from life.”

“Sir,” replied VerBeck, “I have always lived in town.  I never saw a live bear in my life.”

The only formal art instruction that Frank VerBeck ever had was in the Mansfield City Schools, and from a thoughtful old sign painter on North Main Street, who recognized a spark of genius in the young sketch artist, and undertook to teach him basic elements of design.

When frank was 23, he left for NYC, and it wasn’t long before folks in Mansfield started seeing his name on illustrations in nationally syndicated newspaper stories.  By the turn of the century he was a regular contributor to major magazines like Collier’s and Ladies’ Home Journal; and in the first decade of the 20th century he had a whole shelf of illustrated books.

Frank VerBeck  made quite a career around the world; living in New York, England and Bermuda.  He never forgot Mansfield though, and came back to see his parents in Mansfield and sisters in Shelby.

He was a true celebrity whenever he walked into the Mansfield Library, and yet he always took time to read stories to the kids, sitting on the floor of the Children’s Room.

Frank VerBeck made a significant contribution to the illustration of classic American literature.  He was chosen by L. Frank Baum to illustrate some of his post-Wizard of Oz books like A New Wonderland and The Magical Monarch of Mo in 1900-1903; and he was the first artist to interpret the Just So stories of Rudyard Kipling when they originally appeared serially in Ladies’ Home Journal.

Recognized as one of the greatest comic animal artists made him a natural to do the pictures for early editions of the Uncle Remus stories.

Many of Frank VerBeck’s books are rare volumes today, yet he continues to charm collectors at any price.  Those friendly bears can be hard to resist.