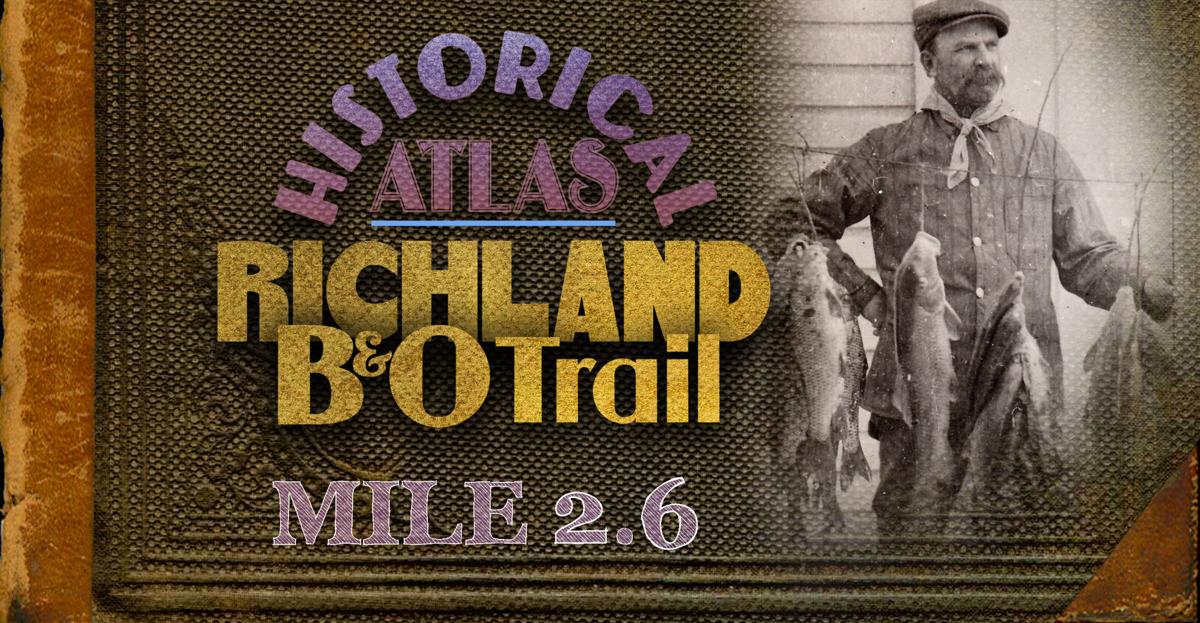 From the B&O station in Mansfield it was just a little over an hour by train to the whistle stop at Gatton Rocks, about halfway between Bellville and Butler. 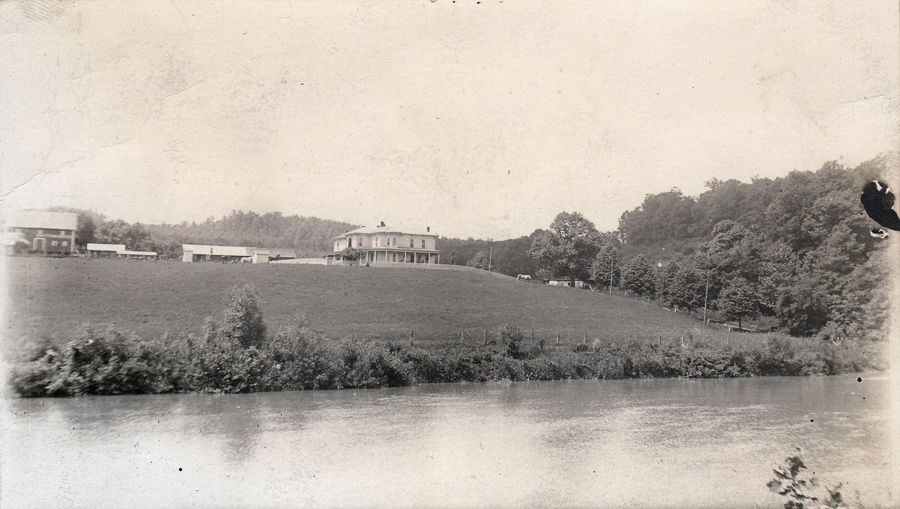 The Big House at Gatton Rocks was built in 1880, and a wing was added in 1912 when the house expanded to include the Wade side of the family. 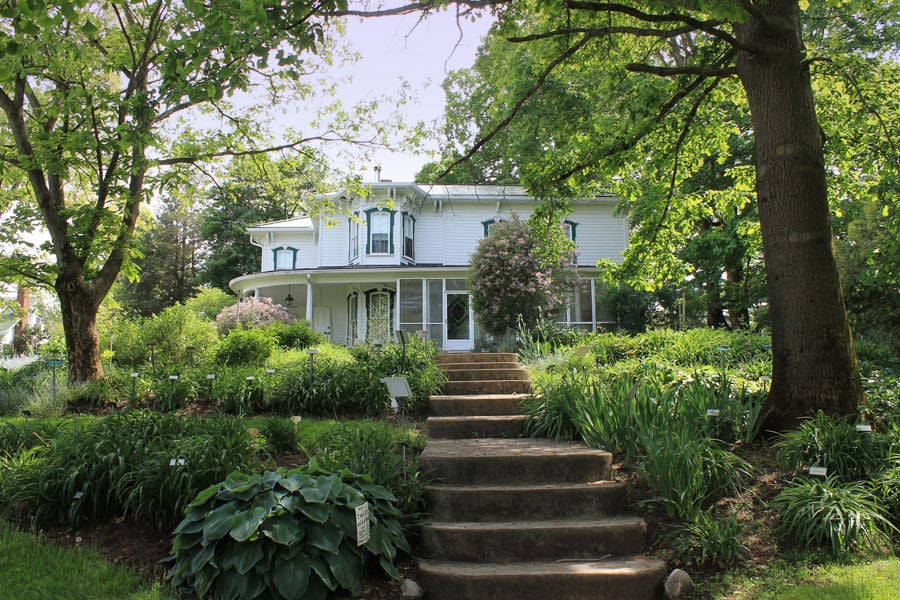 In the decades since 1913, when the photo above was taken, the grassy hillside above the Clear Fork has sprouted dozens of garden beds exhibiting 2,000 different daylilies and a world-class collection of hostas at Wade & Gatton Nurseries. 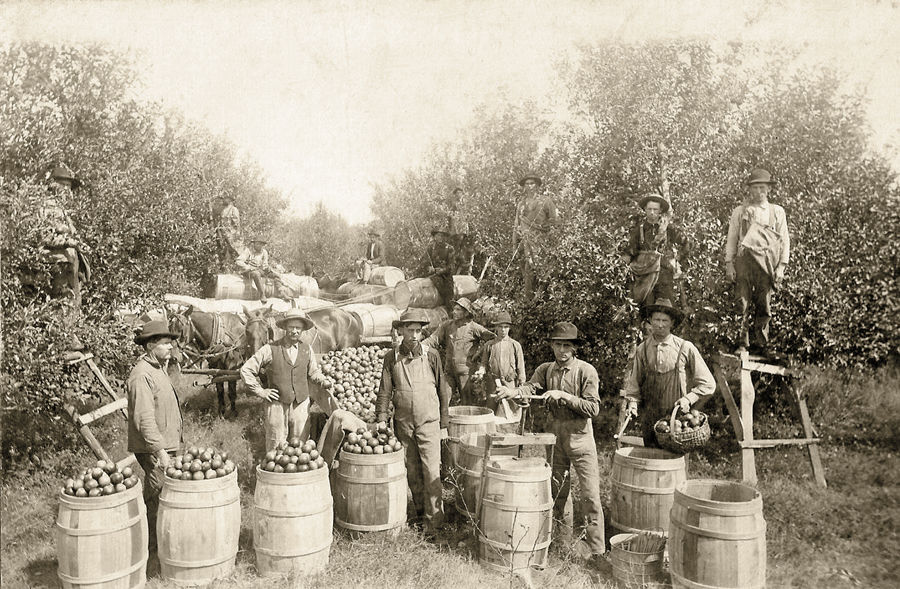 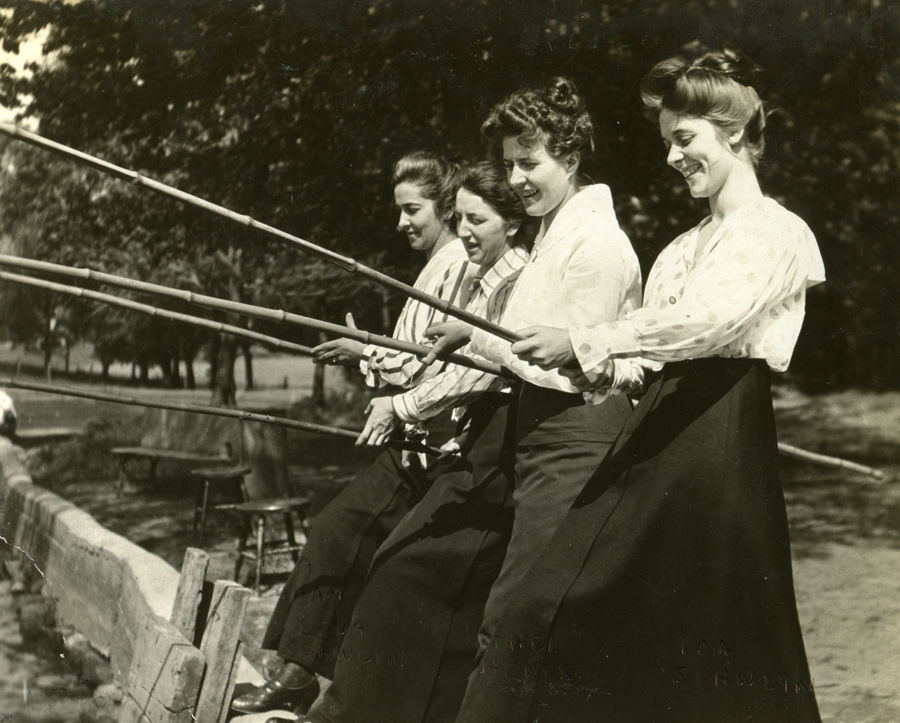 There were many outdoor activities at Gatton Rocks, including fishing in the river or the catfish pond, or horseback riding in the orchards. 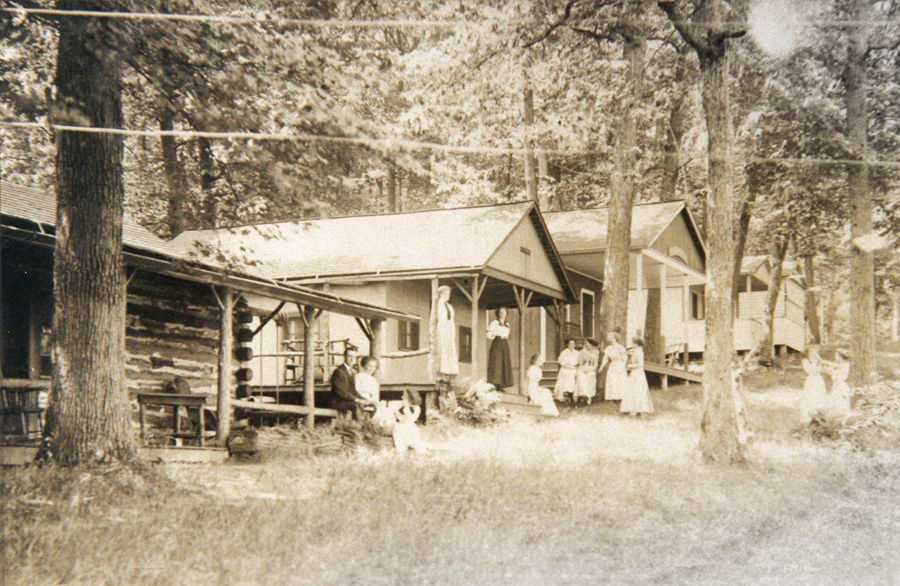 In 1900 - 1902 a series of seven rustic cabins were built on the ridge above Gatton Rocks overlooking the Clear Fork Valley, as summer cottages for various families in Mansfield.  During the ensuing decades they became available for use as seasonal rentals, and often hosted Boy Scout events during the off seasons.  Today, what remains of them is a little too rustic for use. 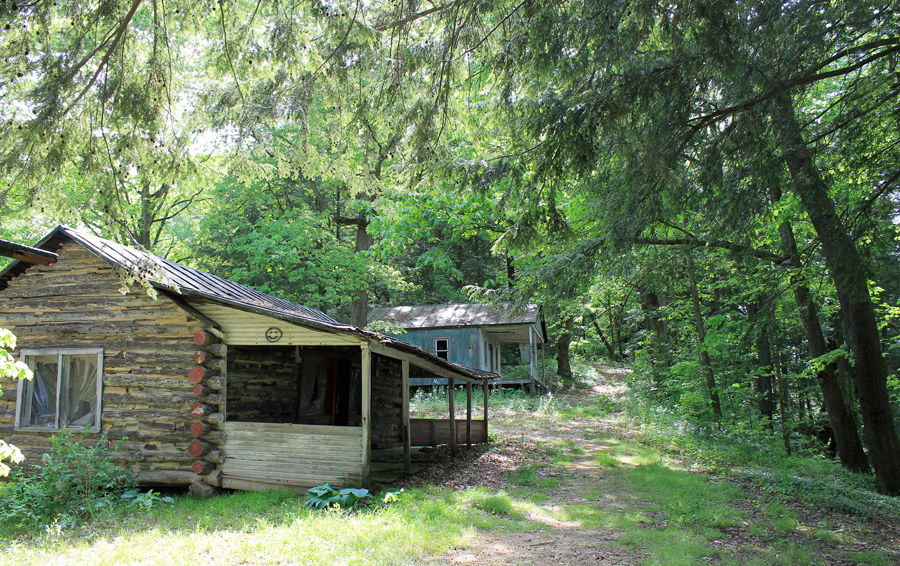 Each of the cabins had a name, and they were The Parsonage, Felsenheim, Rest Knook, Hemlock Lodge and Forest Lodge, Styx, and Old Hickory. 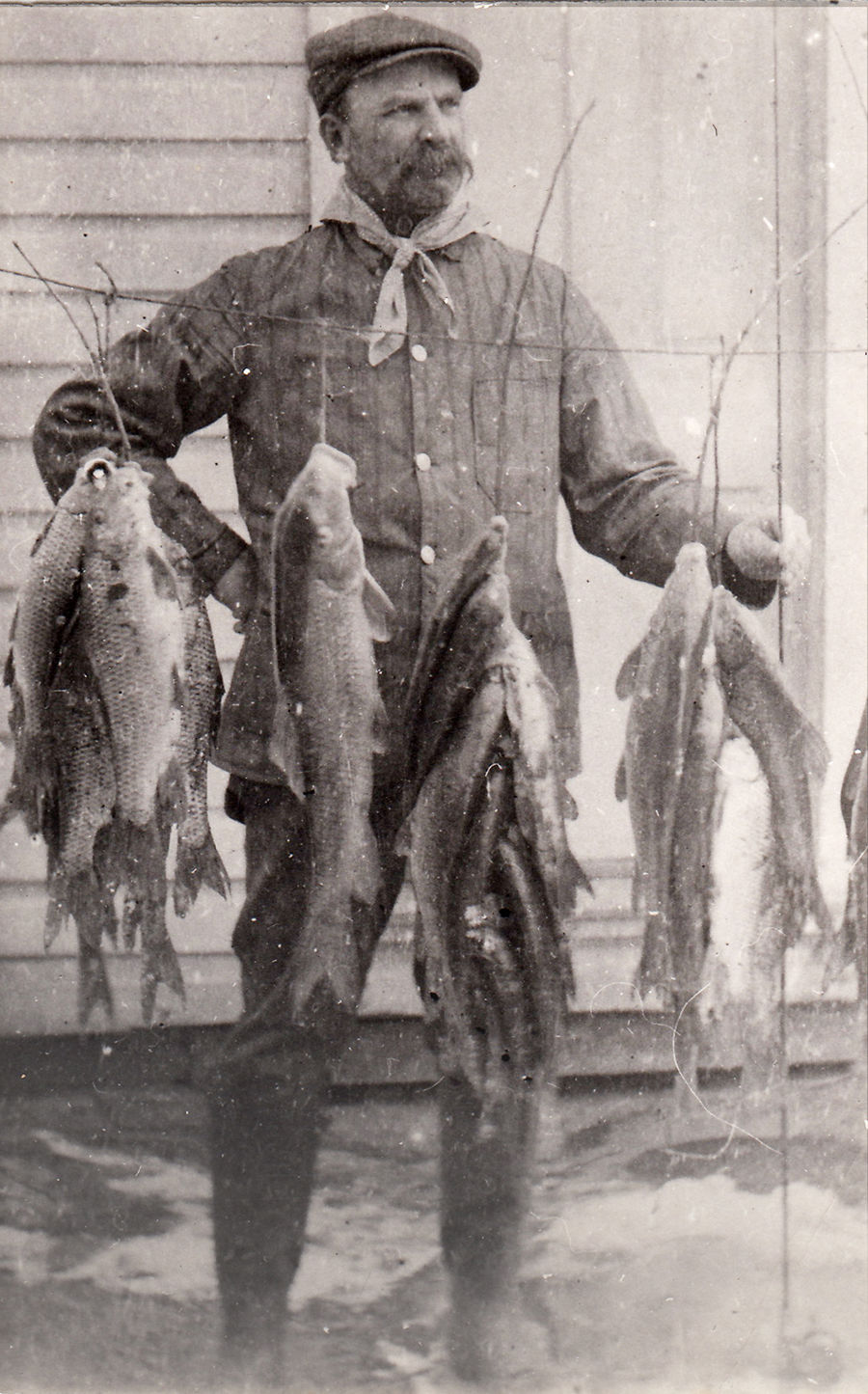 A principal attraction of Gatton Rocks, during its seasons as a tourist destination, was Cy Gatton himself.  Known locally and recognized nationally for his wild ‘tales of dogs and coons,’ Cy was granted a license to stretch the truth in 1908 by the Ancient Order of Reckless and Independent Prevaricators. 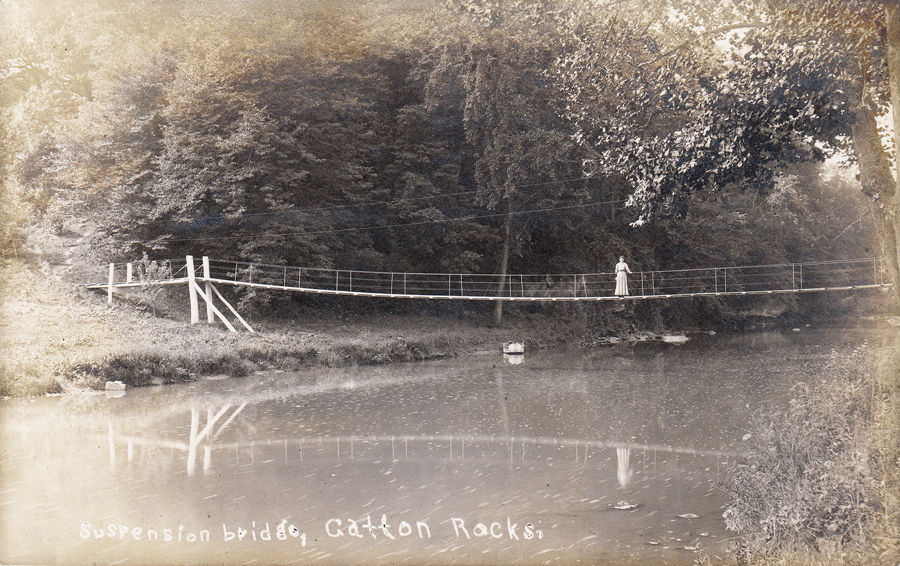 Connecting a footpath route between the B&O whistle stop and Gatton Rocks was a swinging bridge across the Clear Fork River.  Spanning 185 feet, the suspension bridge was a primary photo op in the years around the turn of the last century, and shows up in old picture albums all over the state.

Back when people wore too many clothes in the summertime and they needed to escape the heat in town, there were four excursion trains a day on the B&O Railroad to take them out in the country to Gatton Rocks.

Gatton Rocks was known as a resort area for 40 years, with rustic cabins on the cliffs overlooking the Clear Fork, and folks came for the day or the season to swim and boat and drop their line into the catfish ponds.

They could bring a picnic and dine out by the swinging bridge under the shadows of Lover’s Leap; or maybe have a Sunday chicken dinner in the Big House. At night there was singing by the campfire, and always wild tales by Cy Gatton.

The echoes of those days are faint and few now, but the Big House still sees thousands of visitors each year who come to walk through the amazing gardens of the Wade and Gatton Nurseries that bear testament to the famous fertility of his spot.

The Gatton brothers came to settle in the Clear Fork Valley in 1817.  The tract of land that they settled on included not only the famous sandstone bluffs, but also fertile bottom land along the river, the gold-panning riverbanks, and high hilltops above the frost line that were ideal for fruit orchards.

By the year that Cy Gatton was born, in 1865, the orchards were flourishing, and during his lifetime on the farm he watched the business rise to eminence as one of the finest fruit farms in Ohio.  The railroad branched off a special siding at Gatton Rocks so that freight cars could be loaded with produce to sell in the cities.

According to Cy Gatton:

There was a great big bass in the Clear Fork that Cy was determined to catch, and though he had tried many times before without success he set out undaunted that day in his tin bottom boat with an especially strong fishing line.

He hauled in 4 or 5 whoppers before noon but they weren’t what he was after so he tossed them in the bottom of the boat and just kept on casting.

Of course he finally hooked the big guy and in the fight that ensued the fish pulled him and his boat up and down the river until way past lunchtime.

As it happened the monster bass was pulling him skittering across the rapids at such a terrific speed that the boat got hotter and hotter until the fish he had already caught started frying in the bottom of the boat.  Old Cy just flipped them over and ate them for lunch while he raced up and down the stream.

Late that afternoon when it seemed to Cy that the pace might be slacking just a bit the big fish suddenly leaped out of the water over the boat a couple times and wound his fishing line around the red-hot metal to burn it in two.

And that was the one that got away.