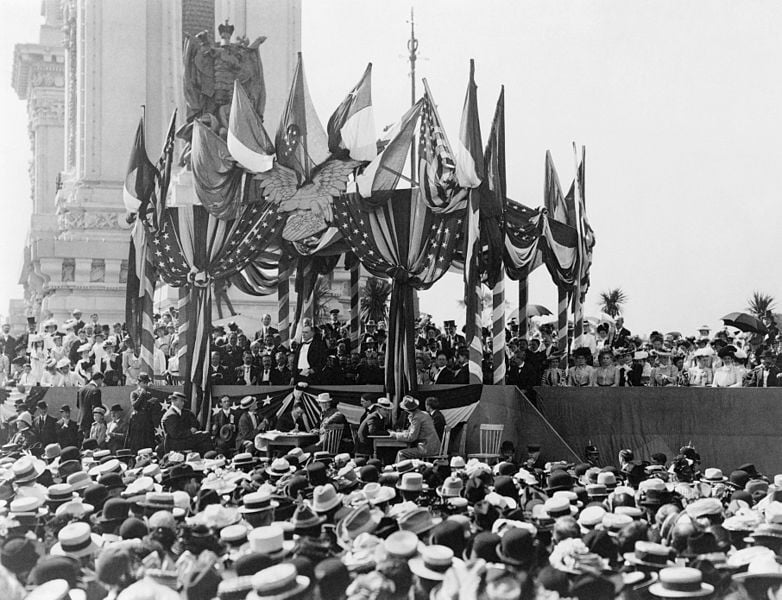 This was the scene at President William McKinley's final address in Buffalo, New York. 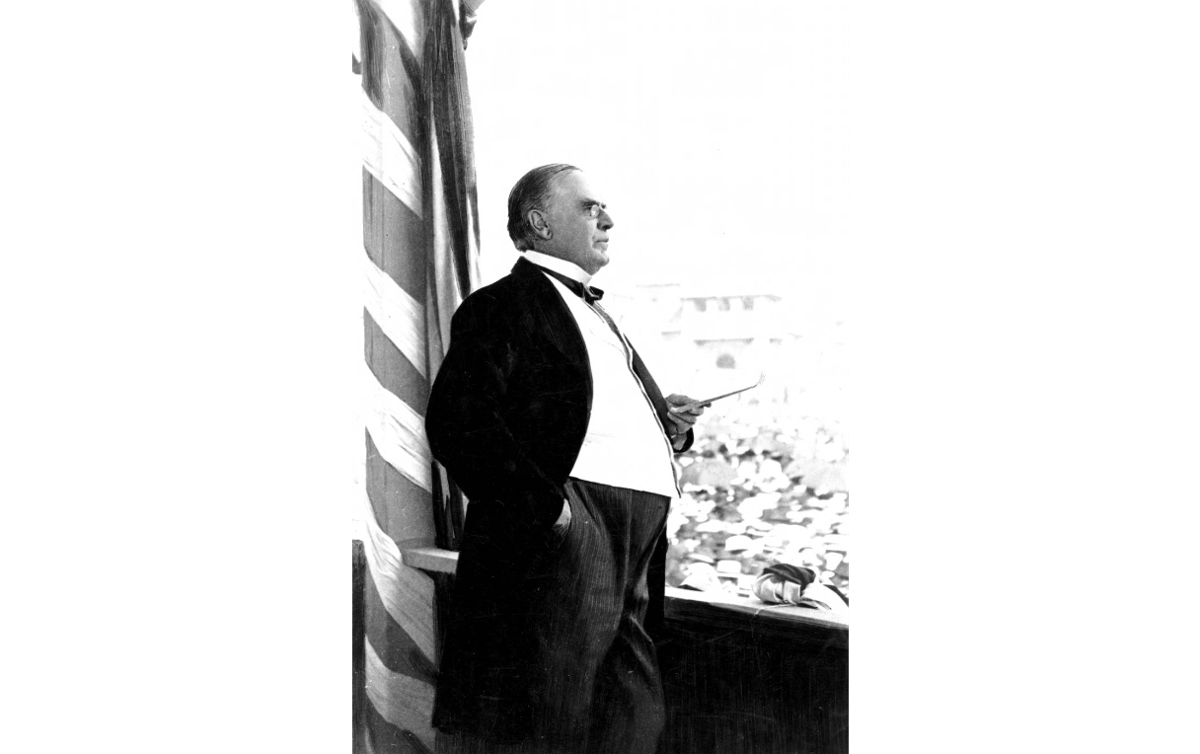 William McKinley giving his last speech before he was assassinated on Sept. 6, 1905 at the Pan-American Exposition in Buffalo, New York. 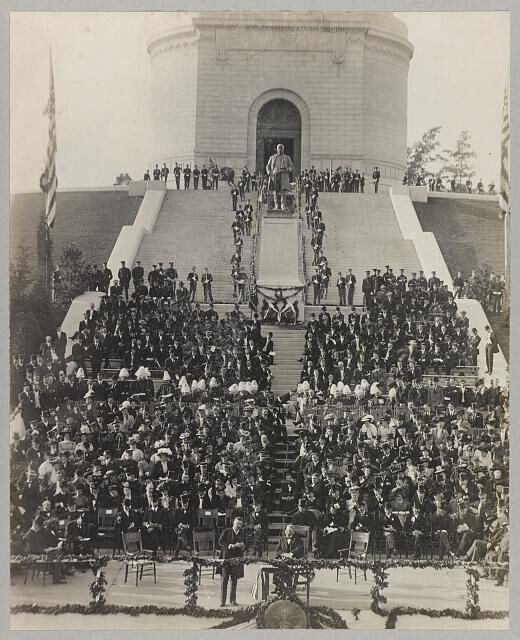 Self-portrait of Frances Benjamin Johnston in her Washington, D.C. studio, 1896. She playfully challenges Victorian conventions for women by picturing herself smoking, drinking and pulling her skirts above her ankles.

We do not know everything there is to know about many photographs in our Archives & Library, but occasionally we are able to find out more. For example our organization has a well-known photograph of William McKinley giving his last speech before he was assassinated on Sept. 6, 1905 at the Pan-American Exposition in Buffalo, New York.

This photograph is one of the most iconic photographs of President McKinley, and it might seem there was not more to discover about the image. Our copy is part of the Courtney Studio Collection. The studio operated in McKinley’s hometown of Canton, Ohio in the late 1800s and early 1900s. They documented his death and the funeral proceedings when McKinley’s body was returned to Ohio for burial.

One day, browsing in a used book store, a book titled A Talent for Detail by Pete Daniel and Raymond Simcock about a photographer named Frances Benjamin Johnston (1864-1952) caught my attention. As I flipped through the book, I immediately noticed that among Johnston’s photographs is the photograph of McKinley giving his last speech. There are also other photographs of the President visiting the Exposition. Because the Courtney Studio Collection includes a glass plate negative of this image, I had not previously considered who might have taken the picture.

Johnston, a professional photojournalist, was at the Exposition to photograph the President and the event. She did not know her photograph of the President’s speech and others of his visit to the Exposition would be the last photographs taken while McKinley was alive. These images received a lot of attention and were widely reproduced in magazines and newspapers. The ‘last speech’ photograph was also printed and sold on postcards.

If Johnston was the photographer, how would a photography studio in Canton, Ohio have a negative of one her most recognized images? This was about 100 years before digital photography. Now it is very easy to copy digital files of photographs and post them on websites, social media platforms and send them to each other by email. In 1901 when a photographer needed to make a copy of a photograph they could not copy the digital file or scan the photographic print. Instead, to make copies of images, photographers took pictures of the pictures. It seems likely that the Courtney Studio took a photograph of the famous “last speech” photograph. In the process of taking this photograph, they created their own negative of the image that is now preserved with their collection at the Ohio History Connection.

Unfortunately, the photograph has not always been published with Johnston’s credit line. She did copyright the image, but authors Daniel and Simcock report that Johnston did not always receive royalties for the photograph and eventually gave up her rights to the image. In addition to wide distribution, the image was also carved in stone. Per Daniel and Simcock, the ‘last speech’ photograph was the model for the statue of William McKinley that stands on the steps of the McKinley National Monument in Canton.

The Library of Congress Prints and Photographs Division acquired a significant collection of Johnston’s work in 1947. Over 3,000 of Johnston’s photographs have been digitized and made available through its online catalog.

In addition to learning more about the famous ‘last speech’ portrait of William McKinley, I also learned a great deal about the fascinating life of Frances Benjamin Johnston. Born in West Virginia, Johnston grew up and ran her photography studio for many years in Washington, D.C. Her parents, Frances Antoinette Benjamin and Anderson Doniphan Johnston, were involved in the political scene, as the elder Frances was a journalist and special correspondent to Congress.

She wrote an article titled “What a Woman Can Do with a Camera” for The Ladies Home Journal published in September 1897 that provided women a great deal of information about the monetary investment, equipment, physical space, interpersonal and technical skills they would need to pursue photographic careers. Johnston focused on portrait photography in her article because this was often the type of photography undertaken by women. She, though, could not be categorized as a photographer as portraiture was only one of the multiple types of photography she produced throughout her prolific career.

From 1889 until the 1910s she worked for George Grantham Bain who operated the first syndicated photographic news service in the United States. The Pan-American Exposition in Buffalo and President McKinley were not the only world’s fairs or U.S. presidents that Johnston photographed. She also documented the World’s Columbian Exposition held in Chicago in 1893 and the Louisiana Purchase Exposition held in St. Louis in 1904. Her political connections gave her access to Washington society and she became an unofficial photographer of the “American Court.” In addition to McKinley, she also photographed Presidents Benjamin Harrison, Grover Cleveland, Theodore Roosevelt, William Howard Taft and often members of their families. Pictures Johnston took of the Roosevelt children and their many pets are particularly charming.

Her famous subjects were not limited to people in the nation’s capital. In 1899 Johnston was planning a trip to Europe. George Bain noted that Admiral George Dewey, who won the Battle of Manila during the Spanish American War in 1898, was visiting European ports on his ship, the USS Olympia. There was great public demand for pictures of the admiral, his ship and crew. A woman boarding a Navy battleship was unusual, but Johnston was able to do so with a letter from Theodore Roosevelt and took remarkable photographs on board.

Other famous people she photographed include suffragist Susan B. Anthony, authors Mark Twain and Joel Chandler Harris, band leader John Phillips Sousa, philanthropist Andrew Carnegie, African American educator Booker T. Washington and his wife Margaret Murray Washington among many others. Her portraits were not limited to prominent people, as she also turned her camera toward workers in factories and mines, public school students in Washington, D.C., African American students at the Hampton and Tuskegee Institutes and American Indian students at the Carlisle Indian School.

Throughout her career Johnston challenged herself technically. In 1891 she took underground photographs in a coal mine in Shenandoah City, Pennsylvania. In addition to the lack of light and the hours needed to set up her camera equipment, there was also the danger of magnesium flash powder igniting the coal dust and starting a fire. She tried underground photography again in a possibly less dangerous setting when she visited Mammoth Cave in Kentucky in 1892. Johnston’s photographs captured the significant impact that people had already had on that subterranean landscape.

In 1903 she tried capturing the impressive vistas of Yellowstone National Park which then required traversing by stagecoach and horseback. Johnston was one of the first photographers to experiment with an early color process known as autochrome in the 1920s.

After 1910 Johnston shifted from photojournalism and focused on architectural photography. She took a particular interest in documenting architecture in southern states and relocated to New Orleans where she died in 1952 with a large body of work to her credit.