ASHLAND -- If you’ve ever walked around in Ashland’s older areas, you may have noticed the words “Keep Sweet” stamped on the concrete.

I recall seeing it as a child, but never knew the significance until later. Those words were the life motto of local cement maker, Ard Blackford. But Ard was much more than a cement maker. 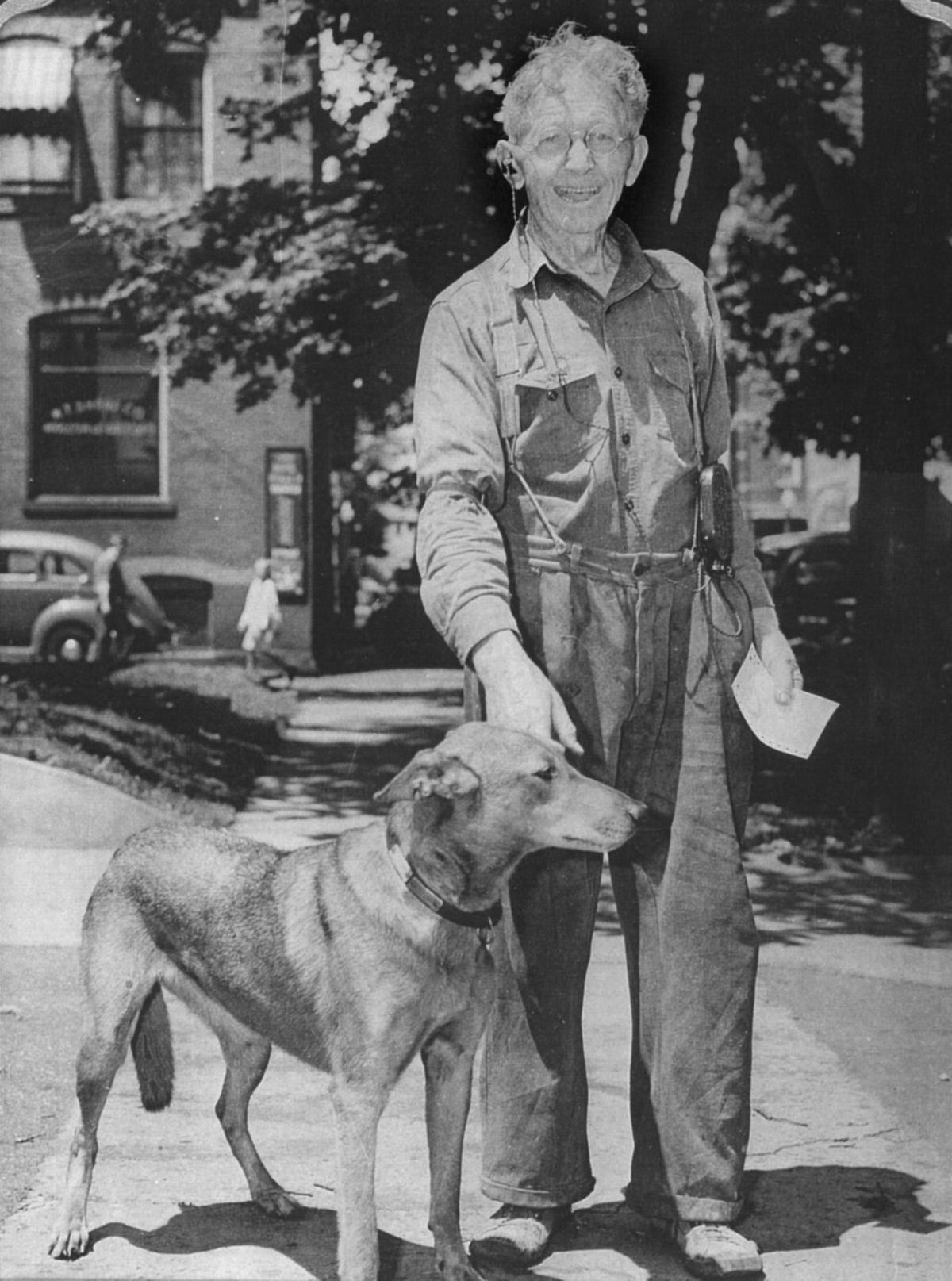 Ard Blackford was an avid walker and often walked with one of his many dogs. 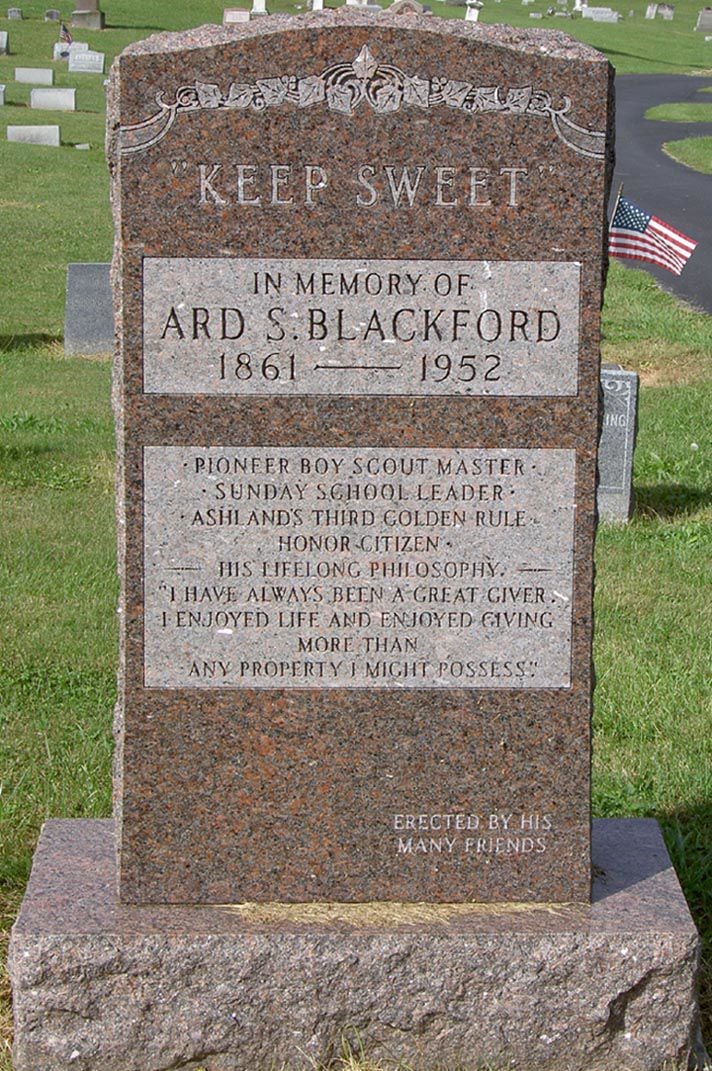 Ard is buried in Savannah Cemetery. His friends helped fund his gravestone. 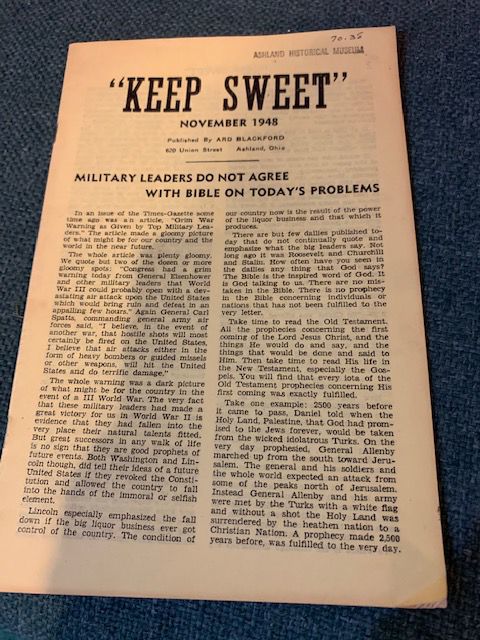 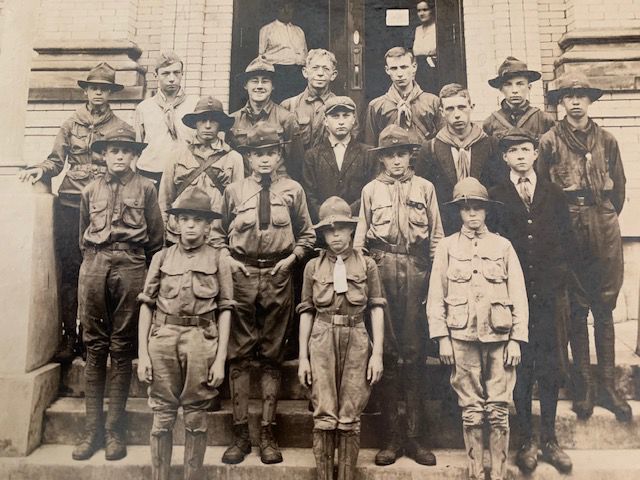 Ard Blackford was an avid walker and often walked with one of his many dogs.

Ard is buried in Savannah Cemetery. His friends helped fund his gravestone.

Ard Blackford was born in Belmont County, near Martin’s Ferry on May 25, 1861 -- just as the Civil War was beginning. He was raised in a very religious home by Blue Stocking Presbyterian parents. He also had several uncles, nieces and nephews who were preachers, ministers and missionaries, but Ard didn’t believe in different denominations.

The Blackford family lived on a farm and Ard described their existence as poor. They had plenty of apples, pigs and potatoes to eat, but were often hungry for the bare necessities in life.

He finished his education at Ferry View School and then taught school there for seven years.

Ard then moved to a mining town in the New Mexico territory in the wild country of the new, lawless Southwest. He saw the need for a place of worship and started a Sunday school class inside a storeroom. He was almost killed when he was attacked by a group of thugs organized by local saloon and gambling business owners.

They really didn’t like his messages about the importance of the church, honesty, and clean and wholesome living. Despite being beaten into unconsciousness, Ard recovered and stayed until a permanent church was built and established.

In 1904, he returned to Ohio and worked for the U. S. Steel Corporation. He married Anna May Greenlee, but after only two years of marriage, she died from tuberculosis.

After visiting his sister in Ashland in 1909, he decided to make Ashland his home. In his early days here, Ard described himself as lonely because he came here as a complete stranger. It didn’t take that long for his life to change.

He began teaching a morning class at the United Brethren Church located at the corner of Center and Washington Streets. Because there were many workers from outside areas helping to build the Lorain, Ashland and Sandusky Railroad, Ard also organized a Sunday school class for workers and their families in a small building on Elm Street.

Later, along with I.W. Parry, he set up an afternoon Sabbath school class in the same building. Before long, there were more than 100 in his class, including 32 girls in the “Sunshine Class.”

Interest grew in building a church and the Elm Street building eventually became unavailable. On Christmas Eve 1913, the Union Mission Chapel opened and was dedicated. This church was later named the West 10th Street Brethren Church and would eventually move to the Grace Brethren Church on West Main Street, now called Grace Church.

Ard organized the first Boy Scout troop in Ashland in 1911, but not without some controversy. Some felt scouting activities would interfere with the boys’ studies while others felt the scouts were only a means to train young boys to become soldiers.

Ard took the youngsters on trips to Round Lake and other places where they learned survival skills. They hiked and performed good deeds all over the county. Before Ard left Scout work many years later, he had introduced over 400 boys to its principles and activities.

Walking was a great passion of Ard’s -- as was the love for his dogs that often walked with him. He walked everywhere, including lengthy hike to Dansville, New York at age 77. He was often seen walking to church and back in Savannah or Rowsburg.

Ard’s passion for teaching youngsters about religion, values and life skills resulted in the publishing of a pamphlet titled “Keep Sweet.” His first issue was published in 1917 and explained the Boy Scout movement along with articles on honesty, virtue and faith in God. Approximately 3,500 copies were distributed each year at no cost to the reader. Ard continued to publish the pamphlet until 1948. The last issue included his autobiography titled “Ashland and I.”

In 1940, Ard again narrowly escaped death when he was struck by a car on Christmas evening. He said he was hit by a truck after dark and it had no lights whatsoever. Ard was badly bruised, had a scalp injury and broken collarbone. About three weeks later he was back walking again.

Ard escaped death for a third time in his life thanks to his dog Betty. Someone hit him on the head three times with the handle of a pick axe when he was near his home after dark.

Fortunately, he made it home but the would-be killer tried to enter his house as Ard was locking the door. It was then that Betty’s growling, barking and jumping scared the unknown culprit away.

In 1949, Ard was named an All American Golden Rule Citizen to no one’s surprise. He received this award in McDowell Auditorium in front of two different audiences with 2,700 attending. Ard was deeply moved by the award but only had one request – that he wouldn’t be required to give an acceptance speech.

Apparently, Ard preferred to stick with speaking to smaller groups of people.

He owned his coal and cement work business at 620 Union Street for 43 years. He didn’t decide to retire until he was 90, and asked for people to give him something to do to help fill his time.

In 1952, Ard suffered a cerebral hemorrhage while walking along Orange Street at Eighth Street and later died at Samaritan Hospital. He was buried in Savannah Cemetery where many of his friends financed his grave marker.

“It’s more blessed to give than to get” was a popular quote from Ard Blackford, and he certainly knew how to unselfishly give to the Ashland community.