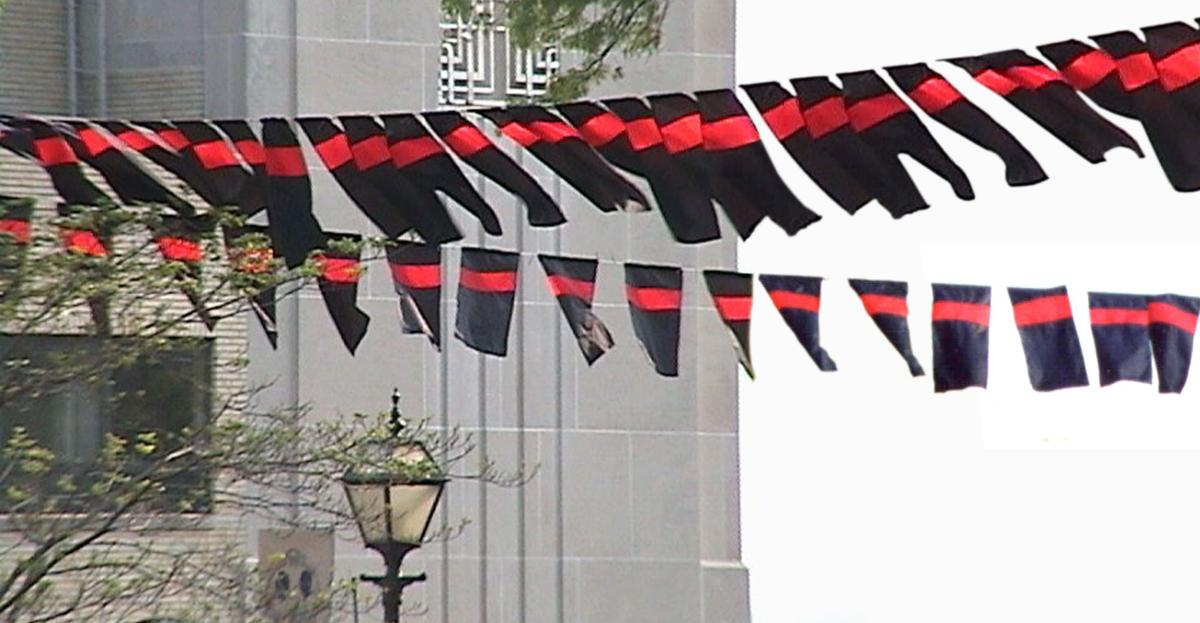 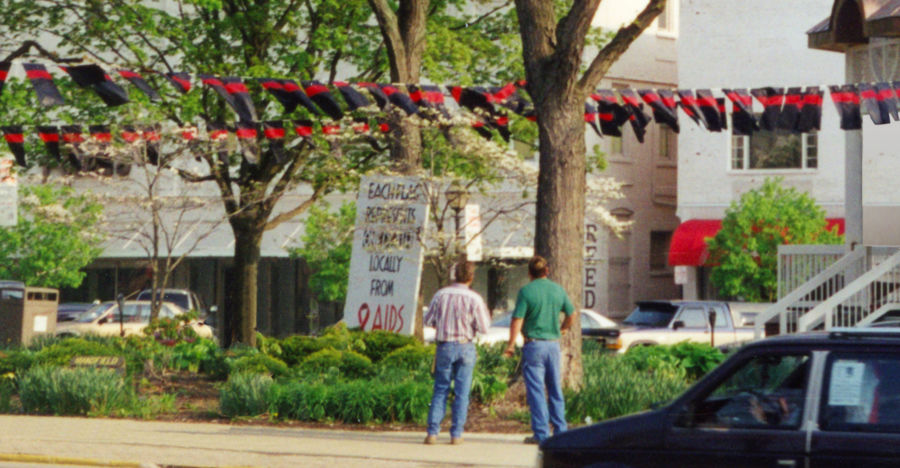 A display of 200 flags flying in Central Park Mansfield during AIDS Awareness Week in 2000, sponsored by the North Central Ohio AIDS Foundation. The sign reads: Each flag represents one death locally from AIDS. 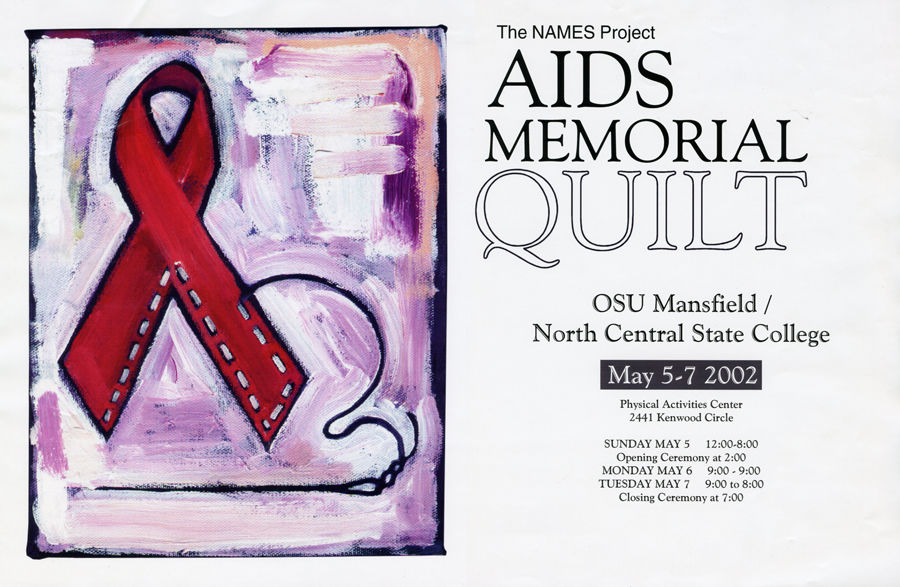 The first patients to die from the effects of HIV/AIDS were publically shamed in the initial years of the epidemic, and passed from the world in silence and anonymity; but as time passed, it was the names themselves that helped change the idea of AIDS in America. Given identities and faces that put a human cost to the catastrophe, the abstract fear of the disease was slowly transformed to concern and compassion.

A large part of that transforming process in the nation was The NAMES Project: an AIDS Memorial Quilt, sewn by families in memory of their lost ones. As it traveled the country, it brought awareness and healing home to communities in a personal way.

This is kind of a sad story, but don’t stop at sad because you’ll miss the truly heroic part. There are many heroes in our community — they all have found ways to rise above themselves in order to embody a spirit of humanity at its highest level of achievement: that of selflessness.

We like to honor these heroes for the inspiration they shine to the rest of us; and to enshrine their names into the hallowed memory of our town.

That is a basic tenet of history: that we record the names.

So this article defies that mandate from the start, and I’ll tell you right up front: the history of this person in our community does not come with a name.

That is the point.

Like the Tomb of the Unknown Soldier, it exists in anonymity because sometimes we need to remember that people live and people die who will not be identified with a name to go on record.  That doesn’t mean their life was not utterly remarkable.

A time to mourn

When I met him he was a relatively young man, but he had already been to 80 funerals. At some of these funerals he was the only person there. If 80 people had died at once, it would be considered a mega catastrophe and there would be a thousand people mourning.

But each of these 80 deaths had happened singly, quietly, mostly ignored. Many had no family who would own them.

This was in the 1980s, and AIDS was a new word in the American language. It was a terrifying word to most people; and to the families of many young men in Mansfield who were dying, it was the last word they spoke before they shut the door on their sons, their brothers.

No one really knew how many died back then because no one wanted to talk about it.

The North Central Ohio AIDS Foundation came into being solely because someone had to raise the money to bury a young man who the coroner said nobody would acknowledge.

Fifteen years later, when NCOAF was staging a public AIDS Memorial service by sewing flags for the dead, there was no way to know how many flags to sew, because no one had ever kept track of their names.

That was when I went to see this friend. I remembered him telling me that he had been to 80 funerals, and I wondered if he could tell me their names. I was so unprepared for where this conversation was going to lead.

He told me he had kept a diary during the 1980s, and he could retrieve the names for me, but it would take a while. He had resolved to never again open those books because it took him back to a time of unimaginable horror and grief.

He had watched young men die who doctors wouldn’t touch. He watched these sick boys dosed with experimental drugs that killed them. He saw so many deaths from AIDS, that he could tell from one look how long someone had to live.

He went to all the funerals. Sometimes he was the only one there.

He told me that if there was a crowd at the funeral, he dressed as inconspicuously as possible — almost in disguise — and he stayed in the background, because some folks in the community had come to associate him with AIDS, and they didn’t want their friends and relatives to know that was how their son died.

On the other hand, he said, if he was the only one at the grave he always wore his best suit. If he was to be the sole representative of the human race to acknowledge the passing of a young man, then he wanted humanity to be presented honorably and respectfully.

He showed me the suit: it had three pieces and classy pin stripes; fitting for a dignitary. It didn’t fit him anymore by the year 2000, so he gave it to me; and I took it because it seemed sanctified by graveside service.

The next week he handed me a list of 87 names. “Please be kind with this list,” he said, “I’m realistic enough to understand that not everyone is a saint just because they’re dying; but death delivers dignity to every soul.”

He told me that what he did after the funerals was go to the graves of his AIDS friends and apologize to them. He apologized for the community in its thoughtlessness; for clumsy families in their cruel ignorance; for stumbling humanity that more often embraces fear over love.

I told him I wanted to write about him, and he asked me to not put his name in the story. It was not from any sense of modesty, or fear of shame, but because “those boys weren’t allowed to have names,” so he didn’t want his remembered either.

He wasn’t affiliated with any relief programs or recognized organization, and he didn’t want to be. His role was completely self-motivated, and he preferred to be anonymous as much as possible, though nurses around town got to know him.

He advocated for patients when it was necessary, and he drove them to their appointments. He stood up for them when no one else would.

By the end of his own life, he had no friends left to mourn him — they had all died long ago.

In time, of course, the AIDS storm quieted in society as fear subsided; and the medications to treat the disease became more effective, so the list of names grew at a much slower rate.

My friend lived to see the new era, but not much longer.

I remember idly picking up a newspaper one day and seeing his obituary.

The paper was a few days old, and according to the short notice, I would miss his funeral if I didn’t run. I hurried to the cemetery, but there was no line of cars, no tent. They were moving dirt into the grave, and the graveyard guys told me there had been no service, no family, no one.

So I drove home to put on the suit.

I went back to stand beside his muddy plot and apologize.

I know this sounds like a sad story, and I admit I left tears in the graveyard; but it is really not about grief: it is about nobility.

I was the only one standing at the side of my friend’s grave, but I was not alone. There were 87 young men who stood with me in reverence: paying honor to a fearless hero of our town.