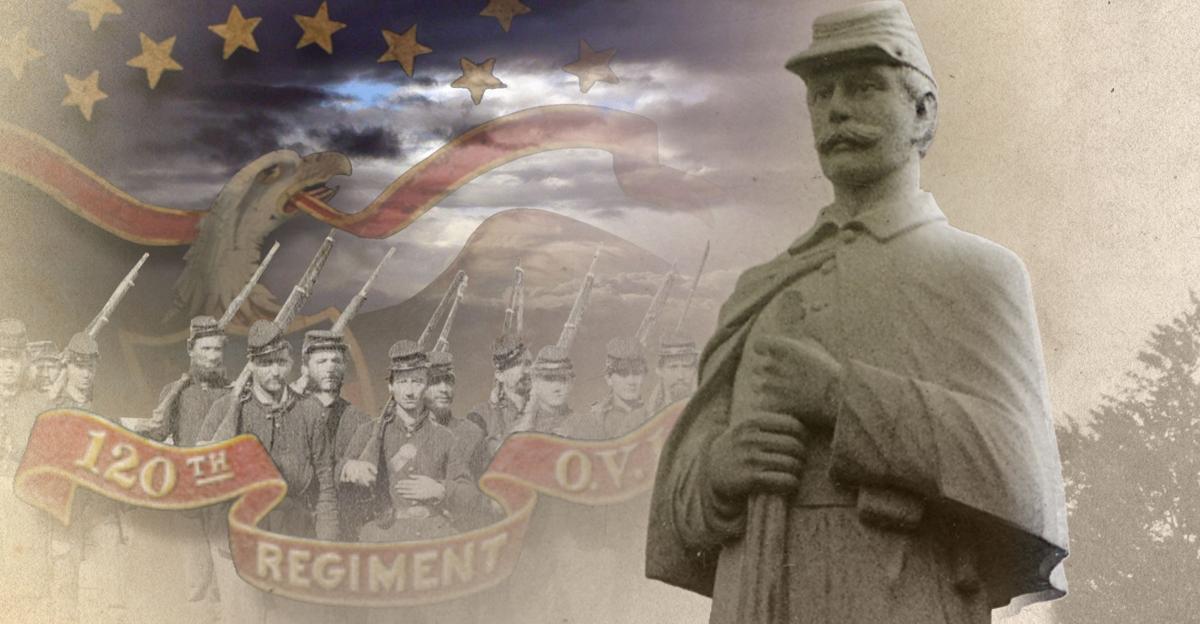 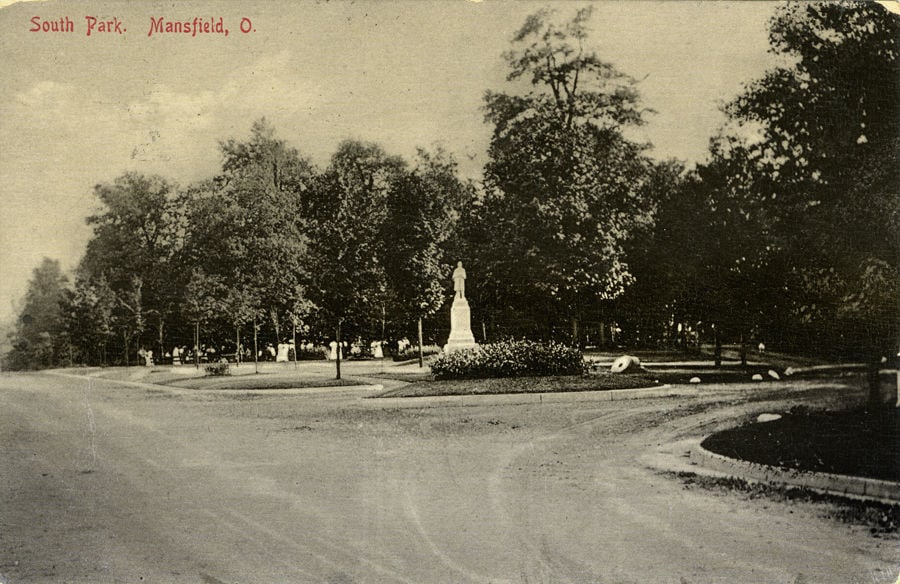 The Civil War monument at the Brinkerhoff Avenue entrance to South Park has stood for over 100 years, making the scene as recognizable in this 1912 postcard as it is today. 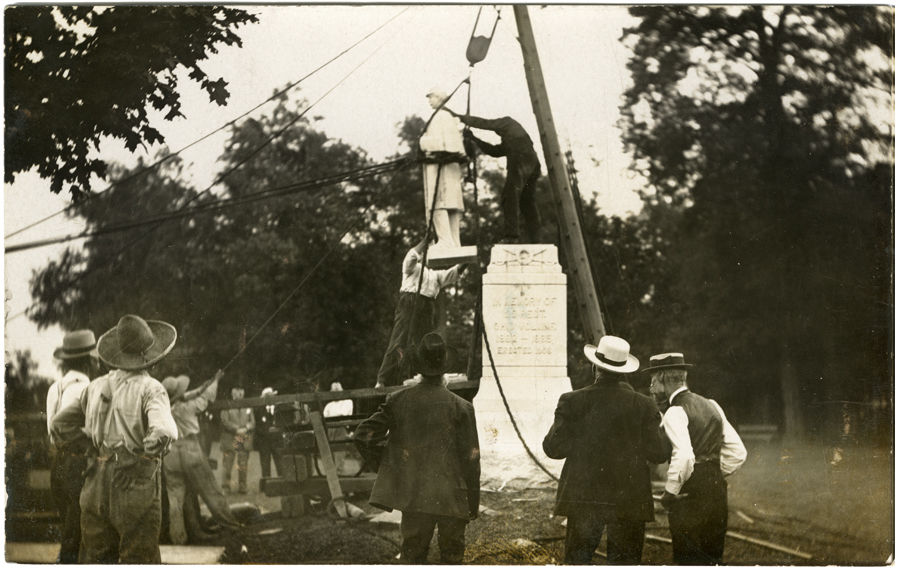 The Civil War sentry who watches over South Park was placed at his post in 1908 to safeguard the memory of Mansfield soldiers who served in the 120th Regiment of the Ohio Volunteer Infantry.  Underneath the base a copper box was buried that contained a roster of the men, accounts of the regimental travels, flags, and mementos. 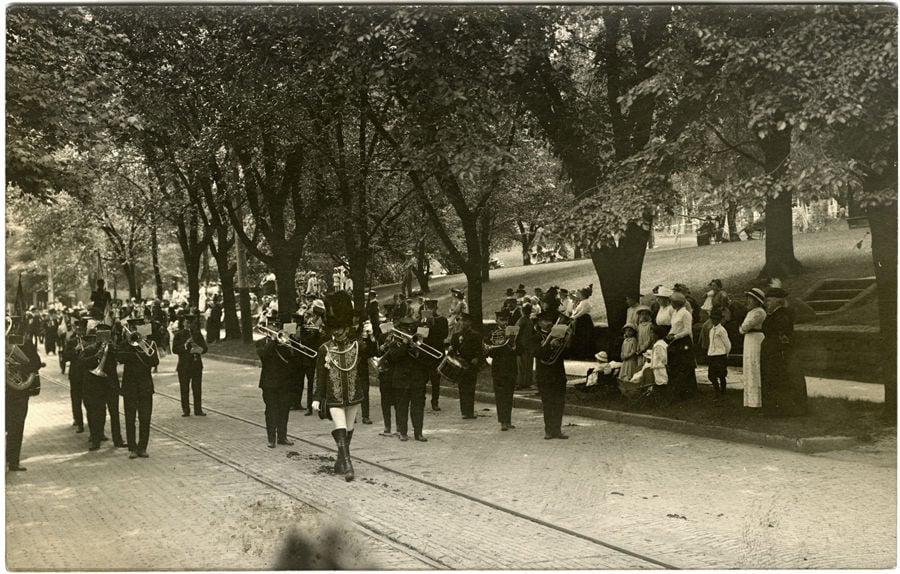 On the day when the monument was dedicated, the city was filled to overflowing with Civil War veterans who came from their homes all over the country to honor the 120th Regiment.  After assembling on the Square, a parade of 450 veterans marched a mile and a half out Park Avenue West to South Park, accompanied by two military bands, from Mansfield and Orrville.  Leading the charge were the same flag bearers who had carried the Regimental colors through the entire war; the original flags retrieved for the occasion from the Statehouse in Columbus. 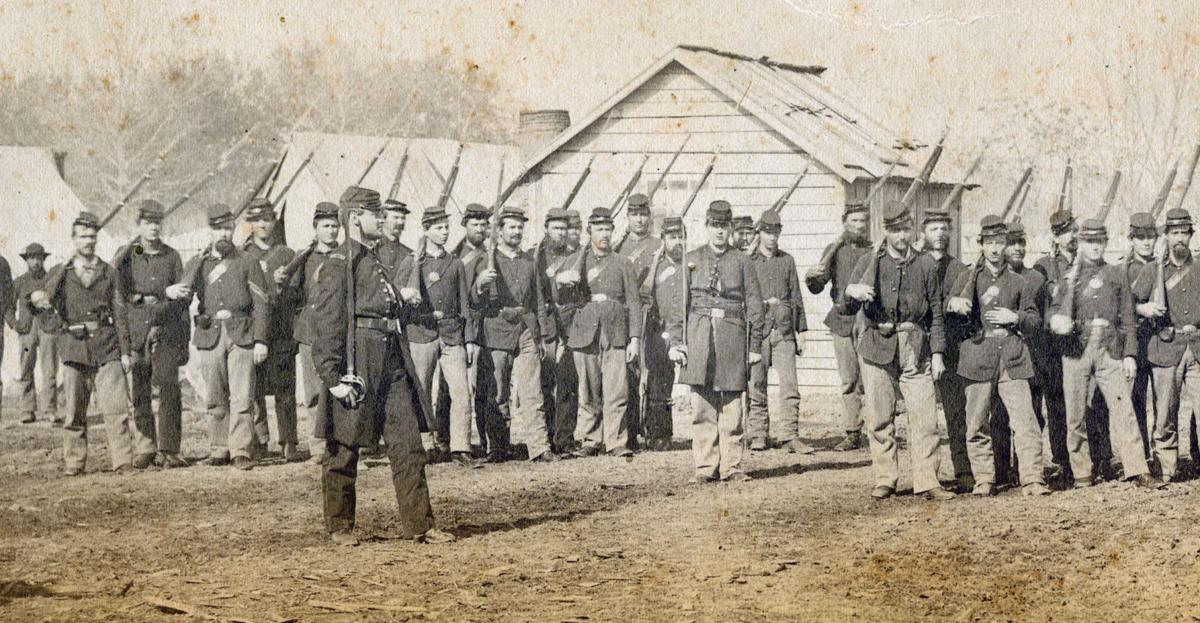 The men who formed the 120th Regiment in October of 1862, were assembled in Mansfield because that is where the training camp was located, but they were drawn from not only Richland, but Ashland, Holmes and Wayne Counties.  The regiment left Mansfield with 976 officers and soldiers, and by 1908 when the monument was dedicated, there were 325 still living.

This photo of Company H was taken early in the war, while encamped in Kentucky. 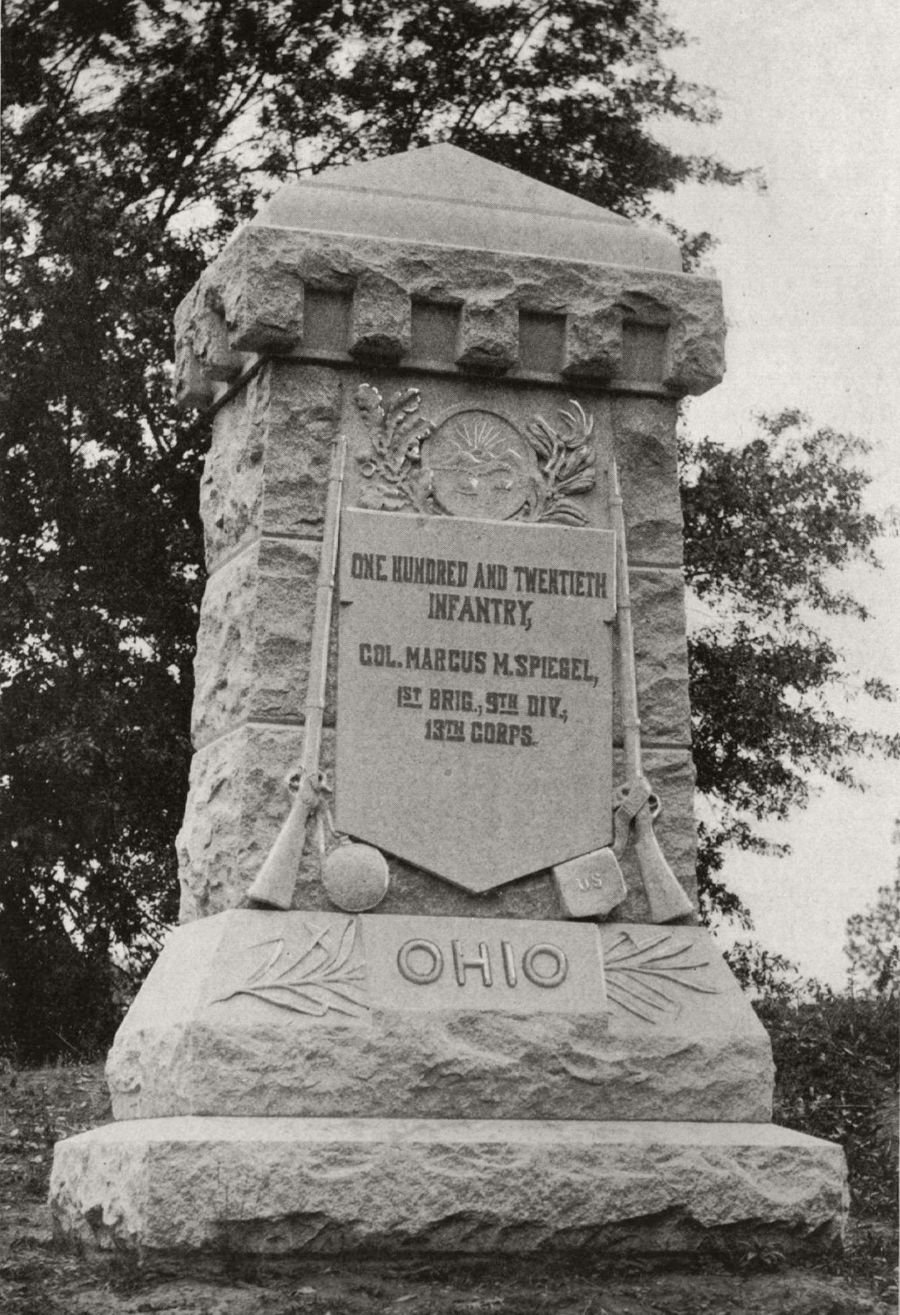 The 120th Regiment became attached to the Army of the Tennessee, and under the command of Gen. U.S. Grant, took part in the battles and siege of Vicksburg.  They distinguished themselves in service to the Union Army enough to earn a specific monument in the Vicksburg National Military Park.

The reverse side of the monument lists all of the battles in which the 120th engaged during the Vicksburg Campaign; as well as the casualties it suffered in the total of 12 killed and 49 wounded. 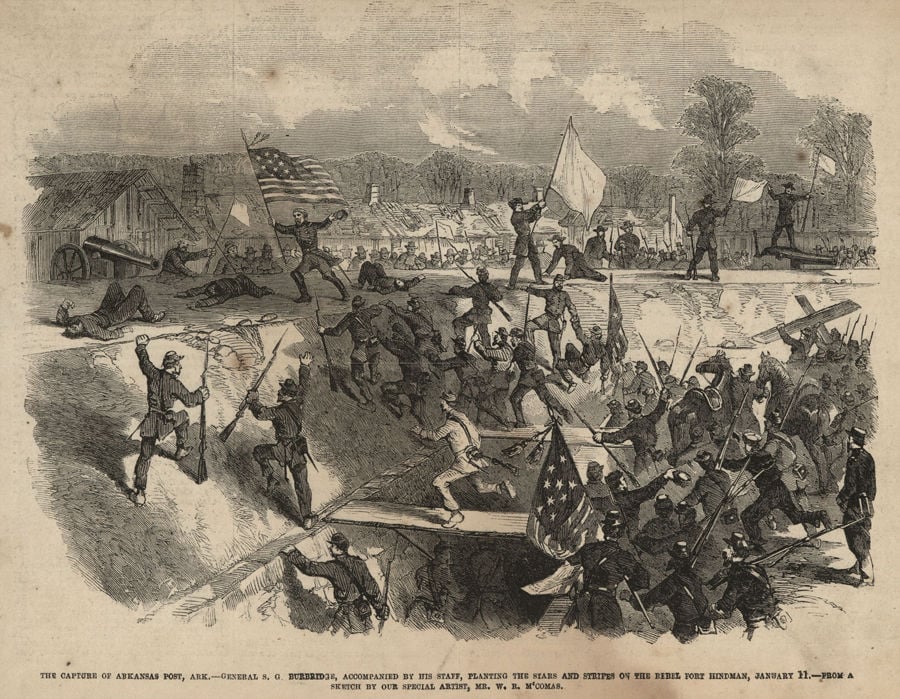 The most notable accomplishment for which the 120th was remembered in Civil War history books was at the capture of Fort Hindman, Arkansas on January 11, 1863.  "The One Hundred Twentieth was the first regiment of the National Forces to enter Fort Hindman; Sergeant Wallace of Company C, color-bearer of the regiment, having gallantly scaled the parapet of the fort and planted the colors of his regiment, an act which shortly afterward brought him a lieutenant's commission." 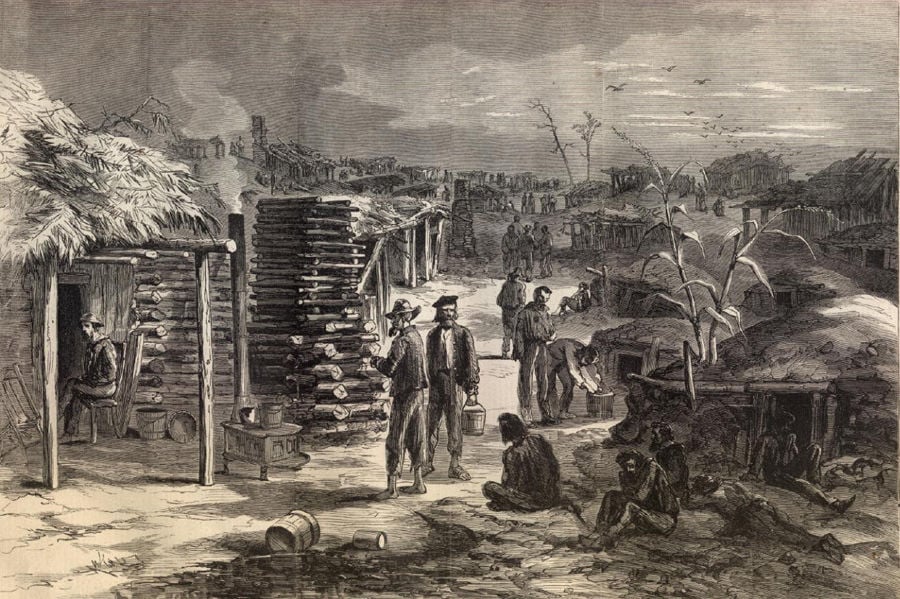 In the summer of 1864, the 120th Regiment was engaged in the Red River campaign of Louisiana, when they were dispatched by steamboat upriver. The ship, called the City Belle, was ambushed by a force of 5,000 Rebels, in what became known as "the incident at Snaggy Point." Nearly the entire regiment was captured, and the final year of the war for most of the 120th was spent in a prisoner-of-war camp at Tyler, Texas. 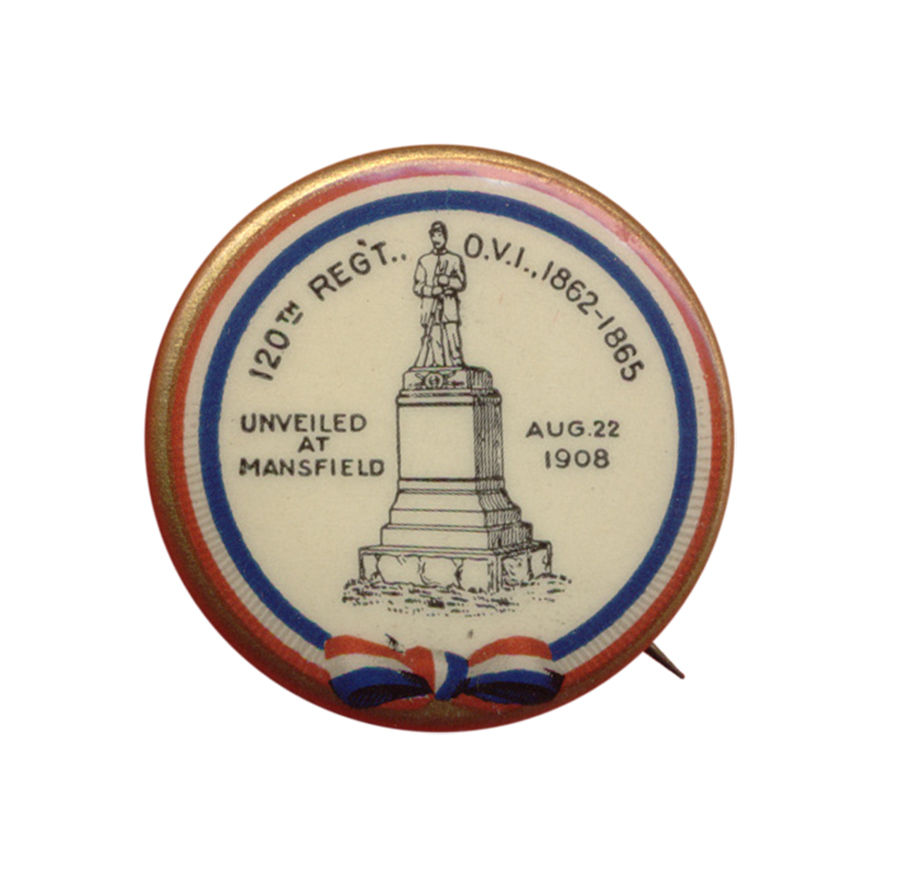 In the decades following the end of the Civil War, veterans of the 120th Regiment established a tradition of gathering together once a year to remember their lost chums.  When the war concluded in 1865, there were 676 survivors; by 1908 there were 325 left. 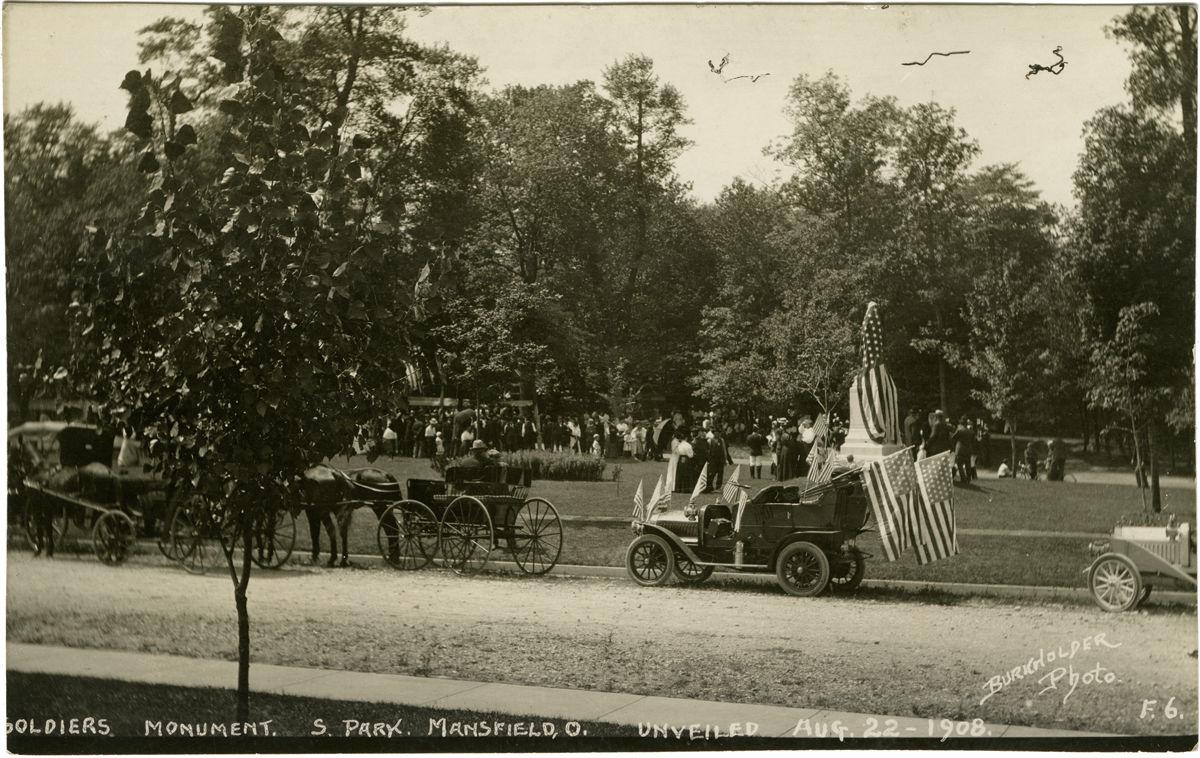 This photo of South Park was taken from across Brinkerhoff Avenue before there were any houses yet built on the street, and Brinkerhoff himself was still alive.  The parade from the Square included several flag-decked automobiles to carry veterans who were unable to walk the distance; in 1908 the youngest of them were in the in their mid-sixties.  The oldest veteran in attendance was presented with a $3 hat; the youngest was given a pair of shoes. 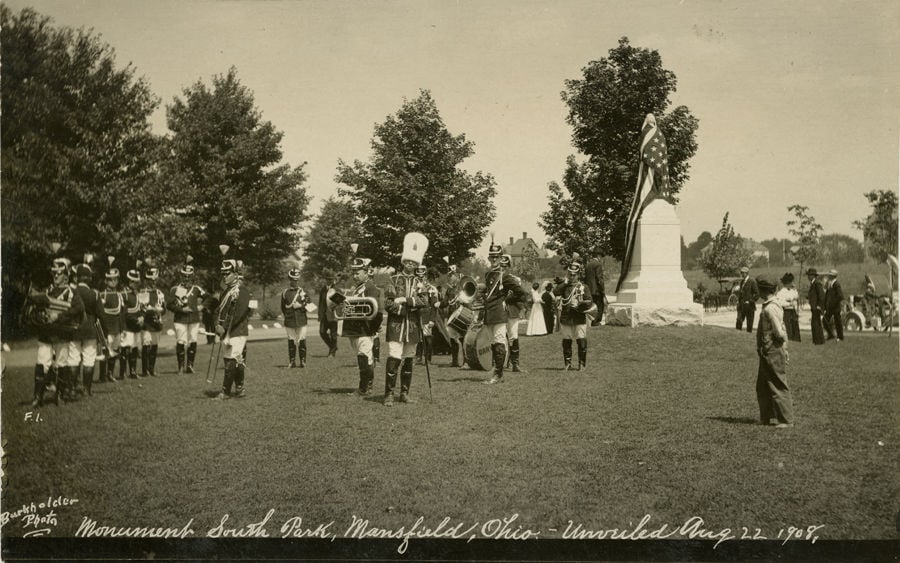 In addition to the 22-piece Orrville military band seen here, the ceremonial day included the Mansfield City band and a drum corps.  A choir sang, a male quartet sang, and everybody joined in the Star Spangled Banner, which was not at that time the National Anthem.  There were rifle salutes and cannon fire, and even a mock battle staged by the Ohio National Guard in a field south of the park. 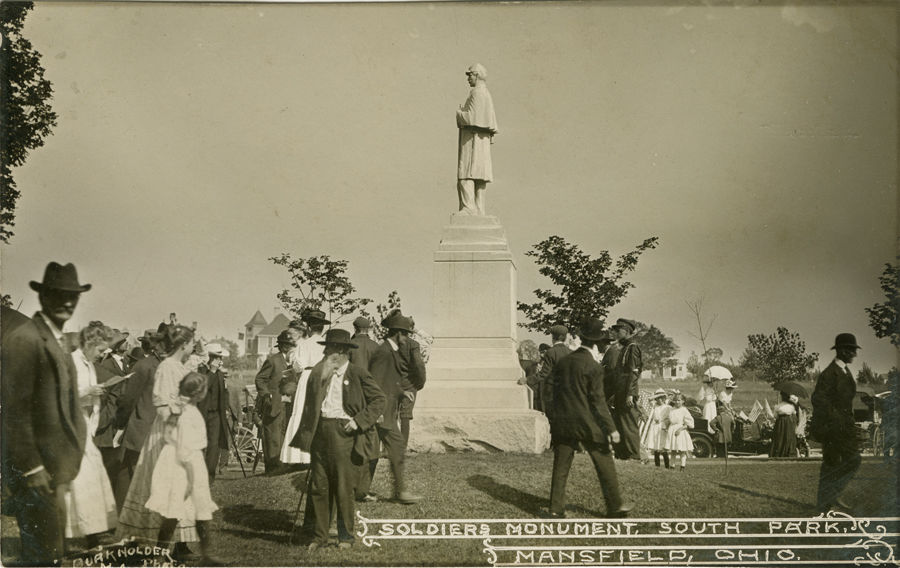 Nearly 500 veterans witnessed the unveiling of the Civil War monument in South Park, and it is a poignant thought to realize the grass which still grows there was once watered by their tears in memory of their fallen comrades.  Of the 976 local boys who left here for the war with this regiment, 300 were lost during the conflict: 275 of them felled by disease.

There is a stone soldier in South Park who stands solitary watch above Brinkerhoff Avenue; he has stood alone for over 100 years, yet he stands for 976 men who put their lives on the line to make America free for all people.

Each of those men deserve to be remembered, and this granite sentry is the one who acts as a bookmark on the page of history in our community where heroic service is commemorated from the Civil War.

That monument of tribute and homage was placed in the city in 1908, on a day marked by dignity and solemn honor; by music and parades; by tears and flowers.

Fortunately for us, the memory of that day was captured in photographs so that we—more than a century later—can take part in the formal remembering of the 120th Regiment of the Ohio Volunteer Infantry.

Images and photos in this article come from the collections of Phill Stoodt, and the Sherman Room of the Mansfield/Richland County Public Library.