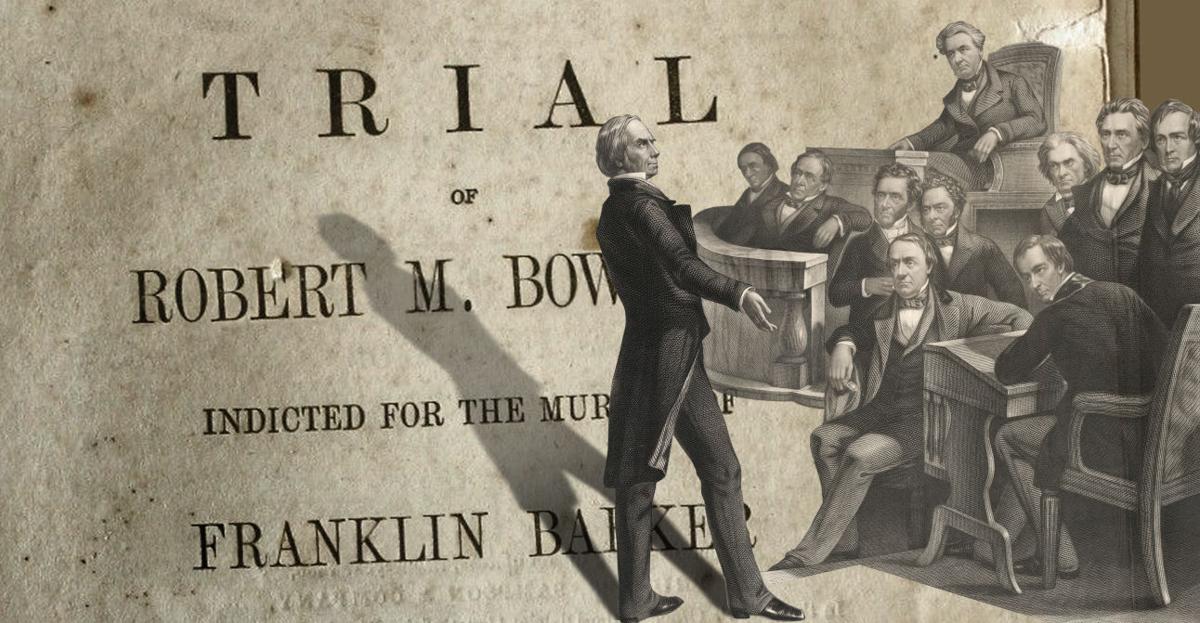 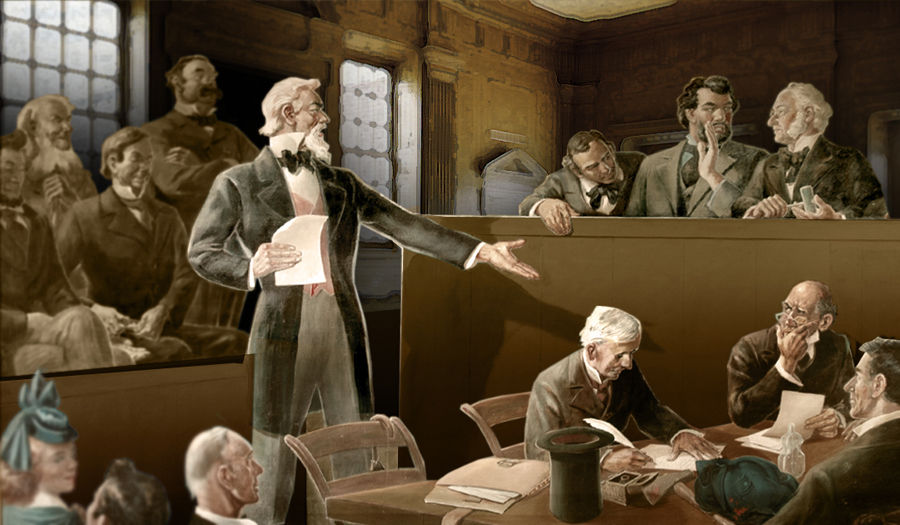 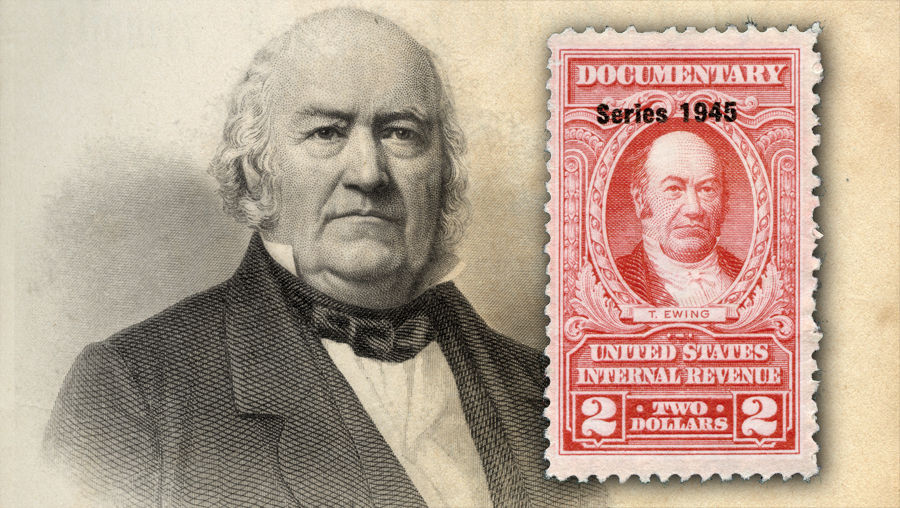 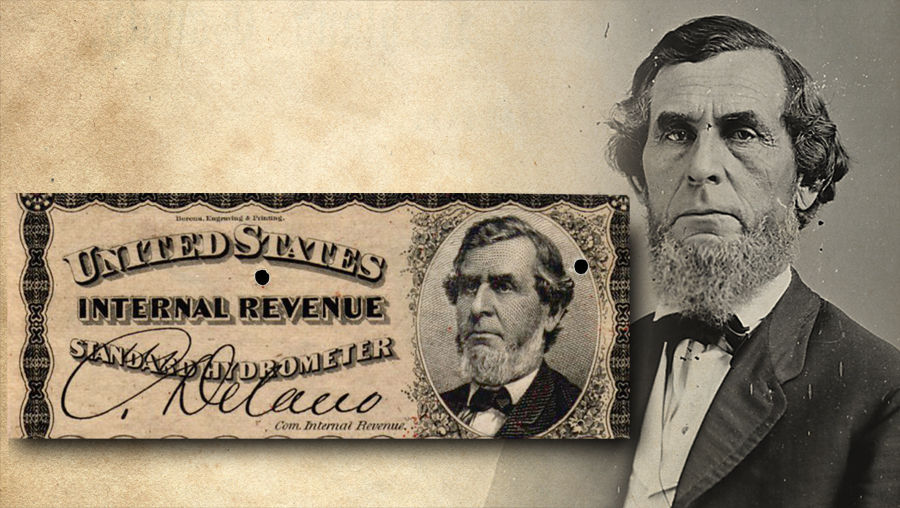 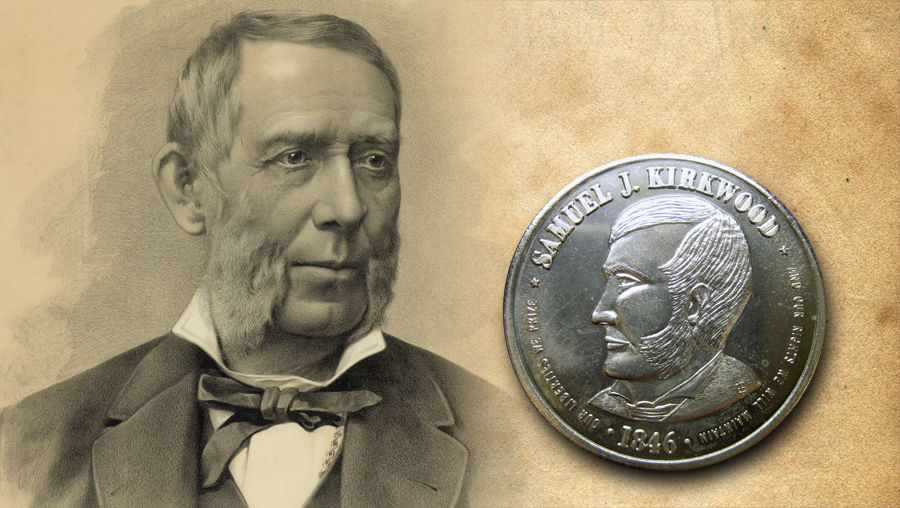 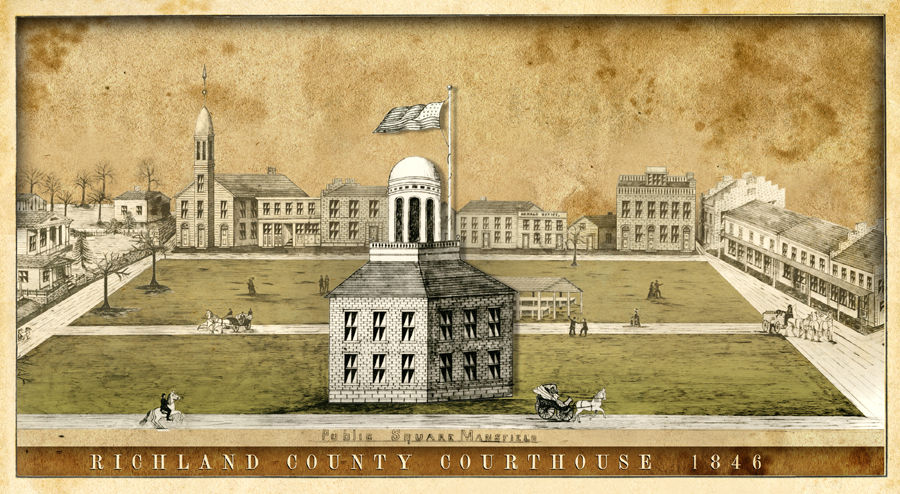 Richland County Courthouse as it appeared in 1846

Ok I admit that what made this the Trial of the Century was not the verdict or the arguments, or the witnesses or the defendant or the victim.

But lest you think I got you here under false pretenses let me assure you there is a fascinating aspect to this story. It has to do with the attorneys involved, and it makes you wonder about the deeper workings of fate and destiny.

After Robert Bowland killed Franklin Barker on the Square there was quite a bit of speculation as to whether or not he may have been justified in his homicide due to the inordinate amount of stress he was under because the victim was harassing him by slandering his wife.

And there was a terrific amount of energy expended by both sides of the case in determining whether or not the victim may have been correct in assailing the good character of the defendant’s wife. Investigators from Mansfield were rushing back and forth to Manhattan gathering depositions from former neighbors and landlords who declared that Bowland’s wife definitely was, or definitely was not, a bona fide woman of ill repute.

But in the end not much of that slander was actually admissible in court.

Bowland killed Barker—everyone saw him do it. He was found guilty of murder through the processes of the court and sent off to the state prison.

That is not the interesting part of the trial.

The element of this trial that makes it such a curious intersection of historical significance has nothing to do with the crime at all, but rather with the attorneys for the victim and the accused.

Mr. Bowland, whose son stood trial for murder, was a highly placed and well respected man in the community. He was influential enough to hire some pretty high-powered legal representation to see to his son’s defense.

One of these defense attorneys was Thomas Ewing; the other was Columbus Delano. The third player in this historic courtroom tableau was the Richland County Prosecutor: Samuel J. Kirkwood.

All three of these men are recorded in the pages of American History. They all had their portraits engraved for use on official governmental seals of one sort or another. That fact, in itself, might seem significant enough to incite some wonder, but it only sets the stage for the truly remarkable aspect of this story.

In 1846 when Thomas Ewing walked into the Richland County courthouse he was already a formidable personality in statewide and nationwide politics. At that time he had already served in the U.S. Senate, and in the Cabinet of President Harrison as Secretary of the Treasury. The only reason he was available to attend a trial in our town was because he and the entire Cabinet had walked out and resigned from President Tyler’s administration in protest.

He was between jobs.

He would eventually occupy the seat as Ohio’s Senator in D.C. once again in 1850, and he would raise some mighty eyebrows by being appointed as Secretary of War by President Johnson after the Civil War.

Mr. Ewing was no less than an Ohio legend, who had established a dynasty of war heroes and political dynamos in Lancaster.  He was well known in Mansfield as a foster father to the Sherman brothers: the future Senator John Sherman, and the future Civil War General William Tecumseh Sherman.

The fact that he was in Mansfield at all trying a case speaks to the financial and social depth and influence of Mr. Bowland.

In 1846 when Columbus Delano was summoned to Mansfield from Mount Vernon to act as another defense attorney, he had already served one term in the U.S. Congress, and was preparing to run for Governor of Ohio.

He had grown up in Lexington, so he already knew his way to the Richland County courthouse.

His life was notable for many public offices he held during significant eras, but he is perhaps best remembered locally for his residence. The farm where Columbus Delano resided is today the campus of Mount Vernon Nazarene University.

Of these three eminent men, Samuel Kirkwood is the only one who has his own statue in National Statuary Hall in the United States Capitol.

Kirkwood was the only one of these attorneys who was from Richland County: he had been a school teacher in Newville before studying law.

When young Kirkwood started practicing law on the Square in Mansfield, his partner in the firm was Atty. Thomas Bartley, also known as Gov. Thomas W. Bartley. Kirkwood went on to hold his own Governor’s seat as well: in Iowa during the Civil War. He was also a Senator from that state for a couple of terms.

In 1846, however, when Samuel Kirkwood played a role in Mansfield’s Trial of the Century, he was a young untried lawyer who had only just recently been elected to the office of Richland County Prosecutor.

This was his very first trial.

So there were these three lawyers in the Richland County courthouse: one already famous, one getting famous, and one at the very beginning of his famous career.

What’s remarkable is what happened to them all several years later.

Two and a half years after the trial, in 1849, Thomas Ewing was appointed to the Cabinet of President Zachary Taylor.

When Ewing arrived in Washington D.C. he consolidated various governmental agencies such as the Land Office and the Indian Bureau into one organization they called the ‘Department of Everything Else.’

Officially it became the Department of the Interior.

As its very first Secretary, Ewing had his portrait hung on the wall of the new bureau.

A couple decades later, in 1870, Columbus Delano was appointed Secretary of the Interior by President Ulysses S. Grant. When Delano moved into the Washington D.C. office there was a picture hanging on the wall of his friend Thomas Ewing, who he had met in court at the Mansfield murder trial.

Another decade later, in 1881, Samuel Kirkwood was appointed to President Garfield’s Cabinet as Secretary of the Interior.

When he walked into his new office in Washington D.C. he had to stare at the wall in amazement.

Two of the portraits looking back at him were the two men who opposed him in court during the very first trial of his life in Mansfield, Ohio.

“They looked down their noses at me then,” he quipped, “they are looking down on me yet.”

These three American statesmen, whose combined years of public service in elected office totaled at least 42 years, whose concerns took them in official capacity from coast to coast, all sat at one table in the Richland County courthouse for three days during the Trial of the Century.

There is a nexus of interwoven destinies connecting otherwise unrelated people and places. The design of this web is expressed and discovered only through the study of history.

If you're looking for more history about the Trial of the (19th) Century there is an excellent book of source material and narrative called Two Sons: The Bowland-Barker Murder by Alan Wigton, 2010.